Nearing the 50th anniversary of the legendary Apollo 11 mission in 2019, NASA released 19.000 hours of communication audio between the astronauts and the staff on earth. Maybe not the most anticipated album release of the year, but thanks to transcriptions of the conversations, the three astronauts and the surreal adventure they were in, come to life.

Recently, I was building the LEGO Saturn V rocket. Beginning at the bottom of the rocket, you build up to the top where the astronauts were seated. For the first time, I became really aware of the small space these men had in their command module – especially compared to the huge rocket behind them. It reminded me of the Apollo 13 movie, starring Tom Hanks. Although a significant part of the movie is shot inside this command module, showing the men’s narrow working space, I never really felt how tiny it was compared to the total measures of the machine. I was probably counting Speedmasters. 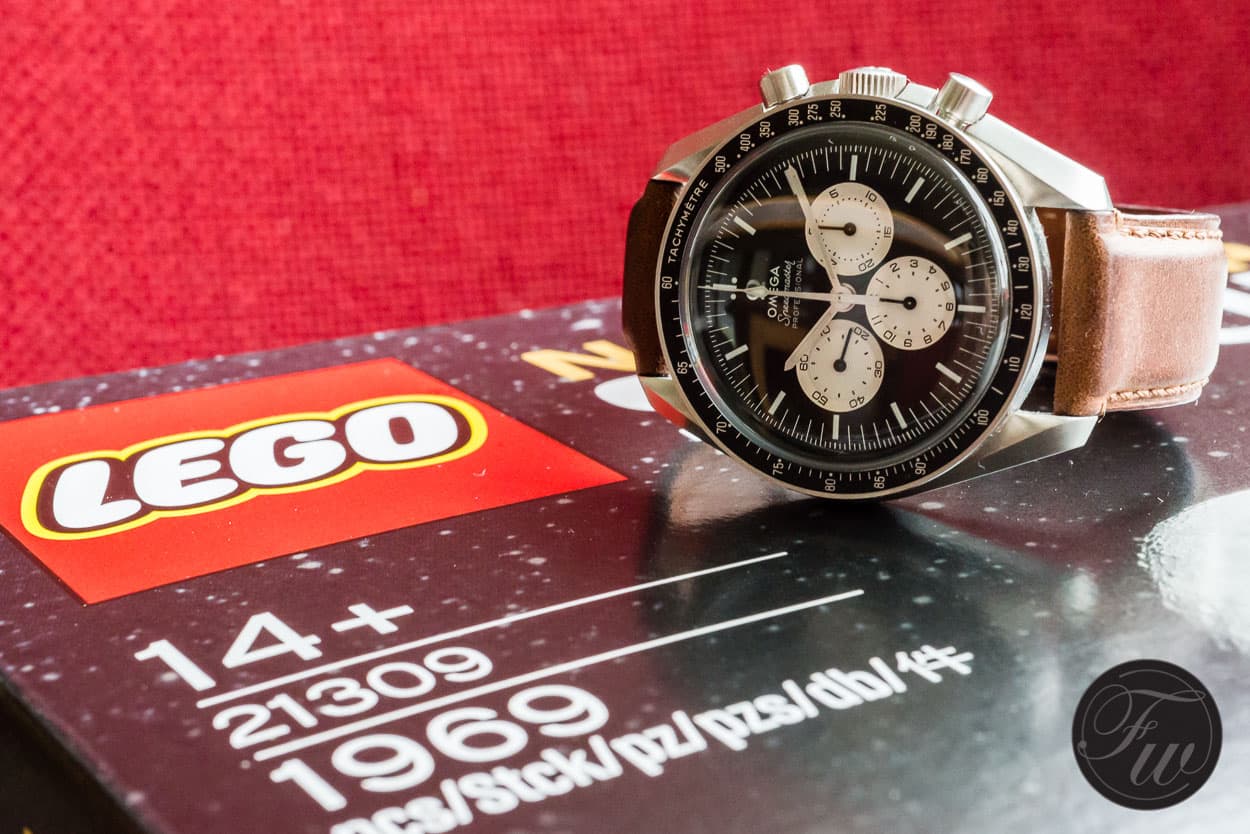 My thoughts brought me right inside this tiny spacecraft capsule and made me aware of the time the astronauts spent there. How was that? What were they doing? All this time? What were they talking about? I mean: picture yourself in a space suit, inside a 11.4 ft (3.5 m) truncated cone with a diameter of 12.8 ft (3.9 m), on top of an over 111 meters long, engine and fuel filled cigar with a total weight of 6.5 million pounds (2,950,000 kg), flying at dazzling speeds out of the blue. 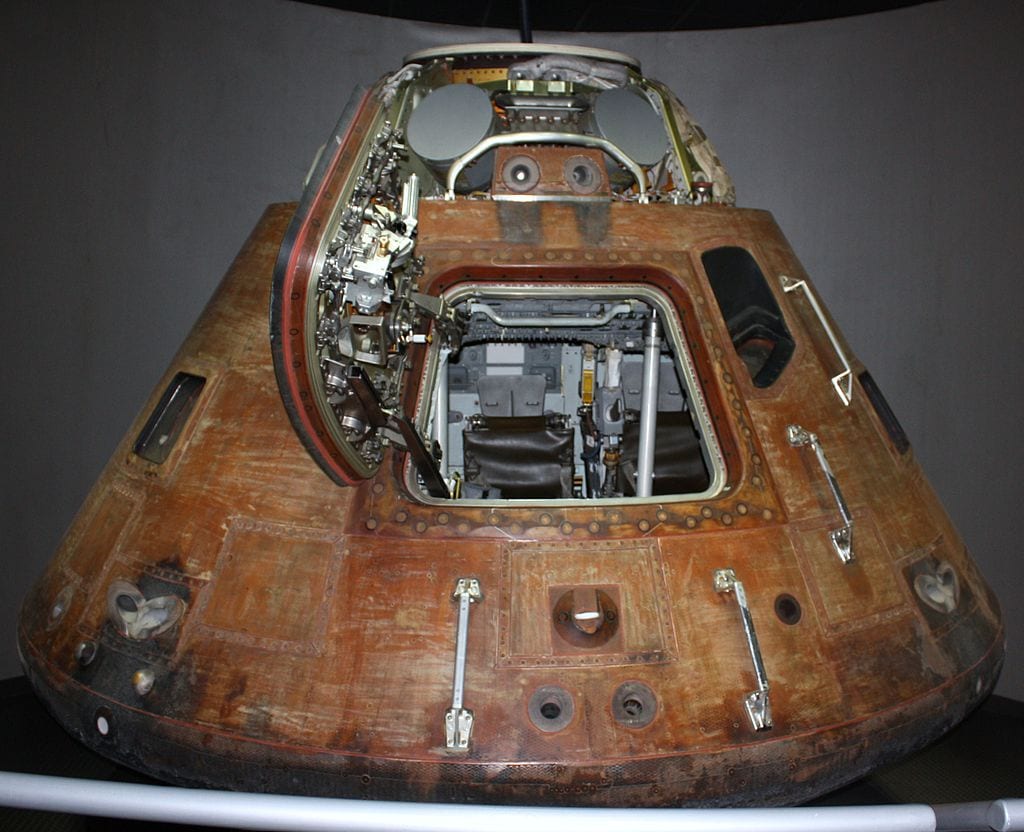 The command module of the Saturn spacecraft offered the 3-man Apollo-11 crew 6.2 m3 living space. This ‘central pressure vessel’ of the command module was the only habitable compartment, leaving an actual interior volume of 210 cubic feet (5.9 m3). The main control panels were in there, as were the crew seats, guidance and navigation systems, food and equipment lockers, the waste management system, and the docking tunnel. The seats were pointed at the front panel, let’s say the dashboard so that each crew member faced the appropriate instruments for his duties. This main display panel (about 7 feet (2.1 m) wide and 3 feet (0.91 m) high) was divided into three parts:

Centre: The centre control panel was for the command module (CM) pilot, who was the navigator. He managed the guidance and navigation computer controls, the caution and warning indicator panel, the event timer, the service propulsion system and more. Here sat Michael Collins (sporting his Speedmaster 145.012).

Right: The Lunar Module (LM) pilot served as the systems engineer, so his control panel at the right-hand side included the fuel cell gauges and controls, the electrical and battery controls, and the communications controls. Here sat Edwin E. Aldrin Jr. (wearing the 105.012).

This is what the panel board looked like schematically:

So, facing your panels at unbelievable speeds of hundreds of meters per second, defying G-forces and what else, you probably just shut up and focus. Well, I would. But the recently released taped conversations prove otherwise. Besides a lot of technical ‘back and forth’ with mission control, several other topics were discussed. And even during more serious events, jokes were made. Buzz Aldrin seems to have been cold as ice all the time, cracking jokes even when earth noticed that – according to the instruments – Aldrin wasn’t breathing correctly. “Well, if I stop breathing, I’ll be sure to let you know”, Aldrin replied. I immediately see myself sitting there, in that right seat, freaking out because mission control doubts my respiratory system. It would stop breathing right away out of panic, but seemingly, Aldrin didn’t really care. At one point, he notices the huge amount of water on earth and asks Houston if they could do something about that.

The continuous back & forth communications were mostly checks to, let’s say, compatibility or synchronisation between the instruments as well as situations of the spacecraft and the information at mission control. But there was also small talk, about school reunions in between the more critical mission instructions. Though often not very exciting, the conversations carry an important part of Apollo 11 and were crucial to the success of the mission and the survival of the crew. Even when the communications seem lame, it could be about life-or-death. Moreover, realizing that three of the speakers were astronauts during their mission, makes even the dullest chitchat exciting.

19 thousand hours of listening is very long. The complete mission took over eight-days and 3-hours, but it will take much longer to listen to the complete recordings. Thanks to the dedicated collaboration between NASA and the University of Texas at Dallas (UT Dallas), the complete 19,000 hours of audio recordings from the Apollo 11 mission have been converted and are now available online. When you click NASA-collection, you’ll have the complete mission communications. The UT Dallas link offers labelled, categories, so you can listen to a specific part of the mission (including of course the famous words ‘One small step …’).

There are also transcripts available with some of the UT Dallas conversations, which play synch with the recordings. These written records will make it easier for researchers and enthusiasts to find of-interest moments in the recordings. For me, listening to these conversations, brought me a little bit closer to the terrifying reality of these three extraordinary men in that cone-shaped module on top of this gigantic rocket. They show a huge amount of fun, alternated with continuous focus and almost computerized precision and frequency in fulfilling their mission tasks. The transcriptions really helped me finding out what is said because the conversations are fast, and the vocabulary is not common to me.

The transcripts and audio can be found on the Explore Apollo website.

Looking forward to the 50th anniversary of the Apollo 11 Mission in July 2019, the publication of these tapes provided me with another level of insight in how things went and how things were. It helped me create an image of what it meant to be an astronaut – probably the number 1 future profession for boys worldwide, and for many of us one of the reasons why we bought an Omega Speedmaster Professional one day.

You can find the original Apollo 11 tapes via this link.