Antiquorum typically has large catalogs. In May of last year they had over 620 lots, but this time it is 744 lots with 100 Namiki pens so if you plan on looking through the catalog, I suggest doing so ASAP and grab some snacks.

I got the opportunity to stop by Antiquorum Geneva and check out the watches in their upcoming May sale this weekend.

To take a look at the Antiquorum Geneva online catalog, you can click directly here.

This Antiquorum watch auction, which is split in two, takes place on Saturday & Sunday May 11-12th in Geneva. There is a wide variety as always and some gems hidden in this especially large catalog. There is a large collection of interesting IWC, predominantly from a single owner, and estimates are interesting (especially on that gold Ingenieur SL…so yum). The Namiki pens are totally out of my wheelhouse, but beautiful craftsmanship nonetheless.

Like last November, I will just focus on my favorite watch from this auction. I think it is challenging to choose just one interesting watch, especially out of 744. So, here it is:

I have to admit it has been a bit strange to see the price surge in Zenith movement Daytonas (1987-2001), especially the first series. I grew up with these watches and for me, they remain in the neo-vintage category. However, with the difficulty of finding excellent condition manual wind Daytonas and those prices having jumped up first, it seems logical that collectors would shift their attention to late ’80s and ’90s Rolex watches. We’ve seen the same trend in Submariners, GMTs and also Omega Speedmasters. With that said, this example is most likely the most elusive and pricey configuration of a Zenith possible. The first series of the 16520 had a so-called ‘porcelain’ dial, which is a shiny white dial with a thick transparent coat on top of the white matte base (not an actual porcelain/enamel dial), and with a ‘floating cosmograph’ meaning that the word cosmograph is separate from the rest of the text on the dial. These are rare and prized as many first series with particular attributes are when in good condition, of course.

So, since I would never buy this watch personally, why am I writing about it? 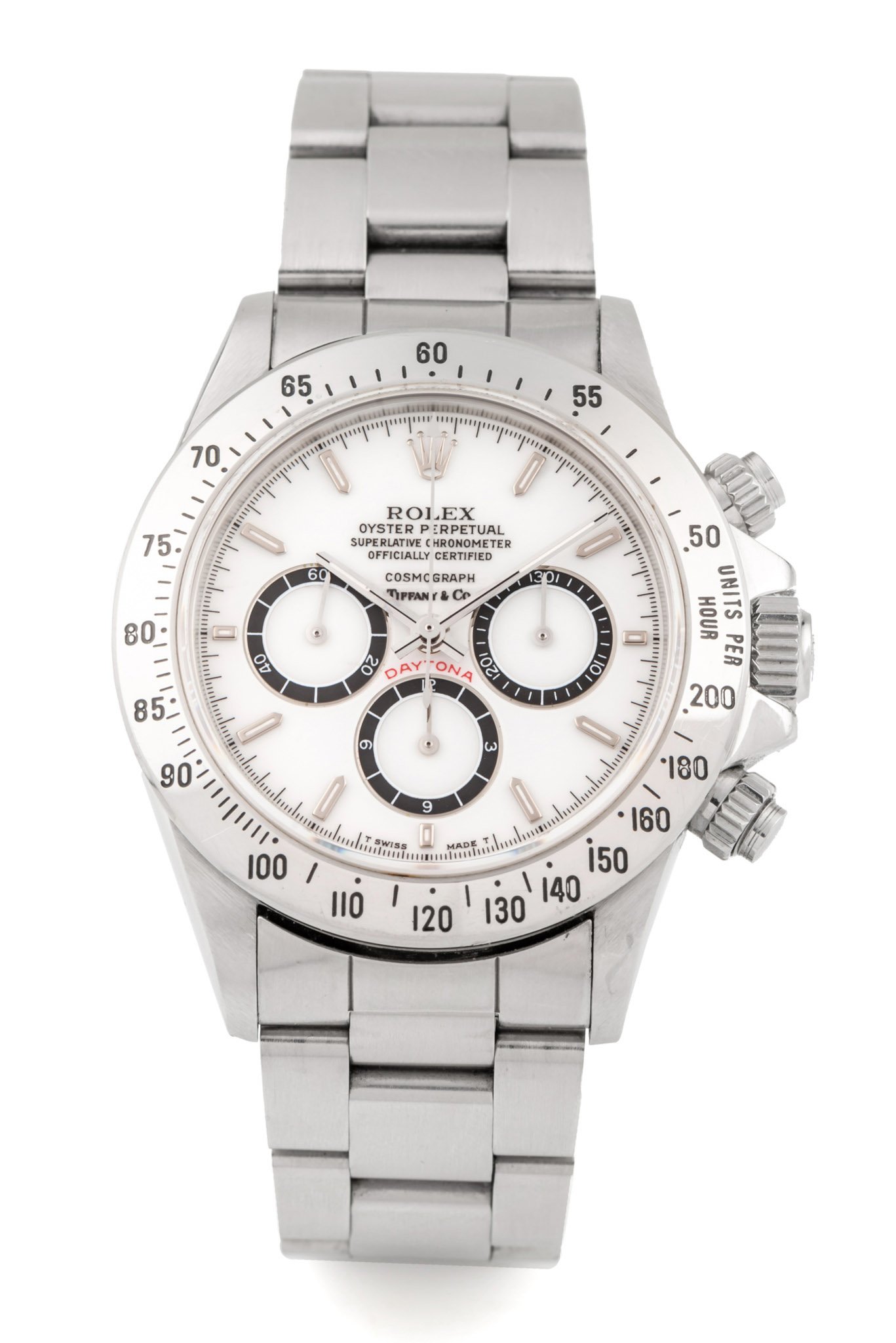 In terms of collectability, the only feature that goes above the first series on these is a Tiffany & Co signed dial. This one is indeed a Tiffany double signed dial. Next, is box & papers, always a plus. However, with a Tiffany & Co signed Rolex, box, papers and a credit card receipt all matching the Tiffany provenance are a huge plus since Rolex doesn’t issue archives. The back of the lug also has that very faint little stock number engraved on it as we find on Tiffany & Co retailed watches. So, since I would never buy this watch personally, why am I writing about it. Well, the answer is because this lot represents just how much the Daytona market has grown and evolved. I think it will sell within the estimate, which is CHF 140K+ and that is pretty amazing to think the kind of prices we have gotten accustomed to. Granted, the ‘find another one’ principle holds true here more than any Daytona in any of the other auctions in Geneva this weekend, it is still an indicator that things have come a long way in the Zenith Daytona market.

For more information about this lot (#688), you can find it here.

Aurel Bacs & Livia Russo in association with Phillips auction house are back for their ninth Geneva watch auction together.

The Geneva Watch Auction: Nine has many interesting, stunning and rare timepieces from a variety of brands. We did notice that for their Geneva sale they are curating more niche & independent modern watchmakers like George Daniels, FP Journe, MB&F, Laurent Ferrier and Ludovic Ballouard. There appears to be a crossover in vintage collectors and these niche independent modern watchmakers, which is interesting. The values appear to be shared in terms of watchmaking tradition, rarity and passionate collectors. George Daniels Grand Complication pocket watch will be on the block and with an ‘Estimate on request’, which is likely in excess of 1-2 million as it sold for over 1 million in 2012 when it was first auctioned at Sotheby’s. 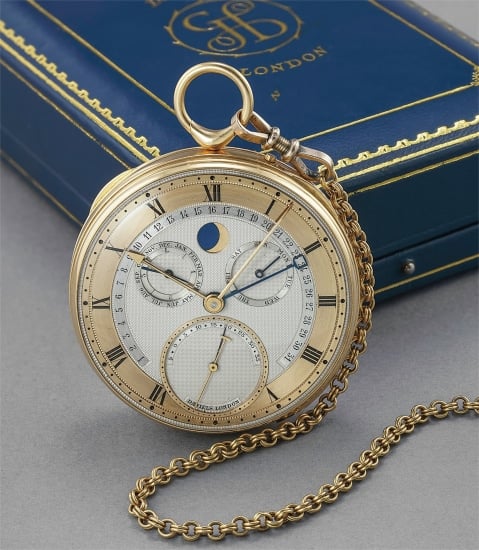 This auction, which takes place on the evenings of Saturday (11th) and Sunday (12th) in Geneva, is comprised of a selection of 220 lots. You can see this catalog online here. This catalog continues to offer a wide variety of wristwatches with 23 brands present (almost the same number of brands as their last May auction at 24). Here is the watch I chose:

It is not a secret that amidst our Davidoff brothers Speedmaster bias, the gold Apollo XI 69 Speedmaster holds a special spot in our hearts. In an often ‘all stainless steel’ world, a big gold watch feels really good sometimes. The reason I chose this lot is that in part due to the re-edition launch by Omega, we have had a ton of questions from buyers that are currently looking for a vintage one and are trying to sort out what is correct and what isn’t. As interest in these is growing, so is the research on different variations. The question I get most often is ‘Shouldn’t that number have an Oval O dial?’ and the answer for all of you is ‘no, they were not delivered in case back number chronological order’.

In November 1969, Omega flew out the first 32 pieces to Houston, Texas and presented them at a NASA gala event. 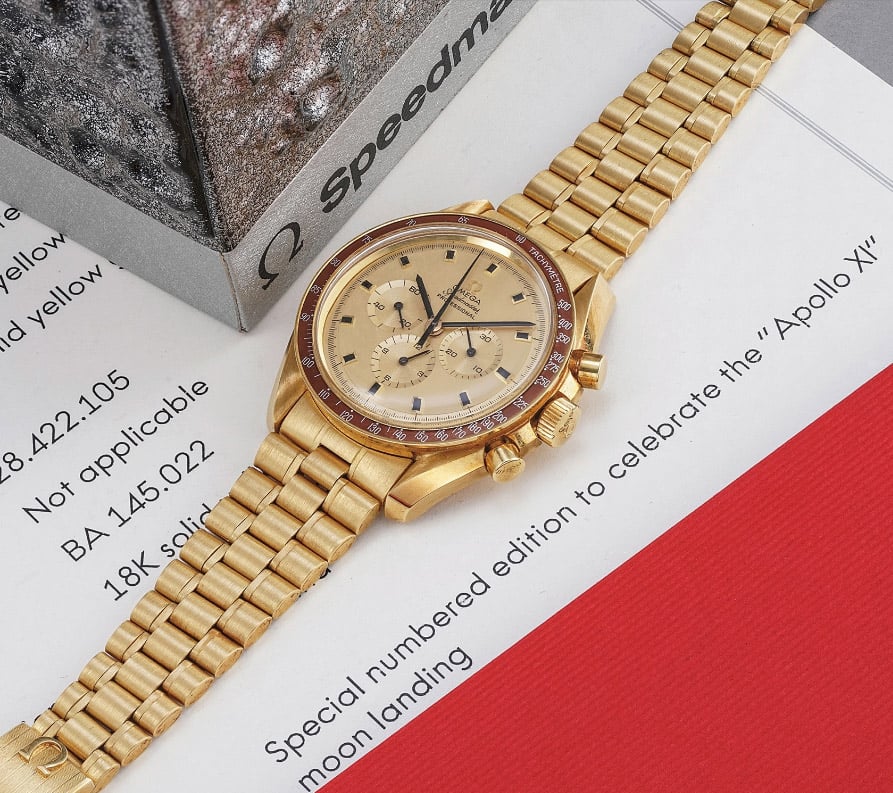 This ‘numbered edition’ gold Speedmaster was launched in 1969, right after the successful Apollo XI mission, as a tribute to the achievements of the astronauts involved in the Apollo program. In November 1969, Omega flew out the first 32 pieces to Houston, Texas and presented them at a NASA gala event. Of course, some of us know that Richard Nixon & Spiro Agnew the then President and Vice President received Numbers 1 & 2 respectively, but returned them to Omega as politicians were not allowed to accept gifts of that value (those two currently reside at Omega Museum). A total of 1,014 pieces were made between 1969 and 1971 and there are a few variants, but it is important to understand that special requests for numbers was already happening back then and certain later numbers were delivered before earlier ones. So, there are 2 versions of the dial: The first is Oval O in Omega and the second is Round O. The Oval O is the first series, yes, but it is a bit more complicated in fact. There are 3 different case backs. The first is the very thin engraving (not filled in) maybe only going up to just under the first 100 numbers (maybe lower). Then came the thicker engraving (not filled in, usually with numbers 100-250) and lastly, the thicker engraving with the red transparent lacquer inside (usually with numbers 400+). Number 250-400 have been observed in both variants.

So, outside of the astronaut watches, there are 5 potential versions:

Serial ranges between 28 million to 29 million and burgundy bezel should all be ‘Dot over 90’. Although there does exist a DNN burgundy bezel, things are confusing enough as it is.

The present lot at Phillips is the nicest example we’ve seen at an auction in a long time and although it doesn’t have the Oval, it does come with a box, which we all know is the most annoyingly impossible Omega box to find, ever.

Lastly, yes we are bidding and no, we won’t tell you how much.

Should you want to have some more information (lot #134), you can see visit the page here and inquire directly.