During an interview at SIHH 2018, Girard-Perregaux’s CEO Antonio Calce, talked about two of their new creations, the Laureato Chronograph and the Neo Tourbillon with Three Bridges Skeleton. Watch this video to find out more.

In unveiling the first ever skeleton version of its Neo Tourbillon with Three Bridges, Girard-Perregaux is showcasing a new exercise in horological architecture.

The Neo Tourbillon with Three Bridges Skeleton is crisscrossed with slender black finely rounded bridges. Their curves and cut-outs define the structure of the visual effect and support an incredibly slim mechanical structure. The ethereal suspended masses appear truly improbable given the extreme transparency of this complex calibre. Stretched like cables over a precipice, the bridges of the skeleton calibre are a nod to the architecture of their monumental counterparts around the world. The Millau Viaduct in terms of its sheer scope; the Mohammed VI bridge in Rabat for the openworked and sensual shape of its pylons; and the Oversteek Bruk for the fine sense of balance it exudes. 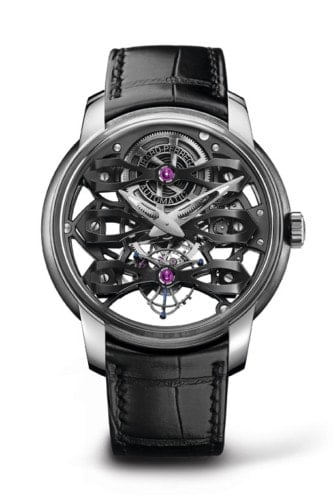 Click here for more information on the Bridges Collection.

The model is presented in a 45 mm-diameter titanium case measuring 15.85 mm high. The satin-brushed bombed case band is distinguished by the total absence of any bezel. Its polished lugs are perched high on the case so as to create a strong and early inflection. It is this curve that ensures the Neo Tourbillon with Three Bridges Skeleton sits so snugly on any wrist, however small. 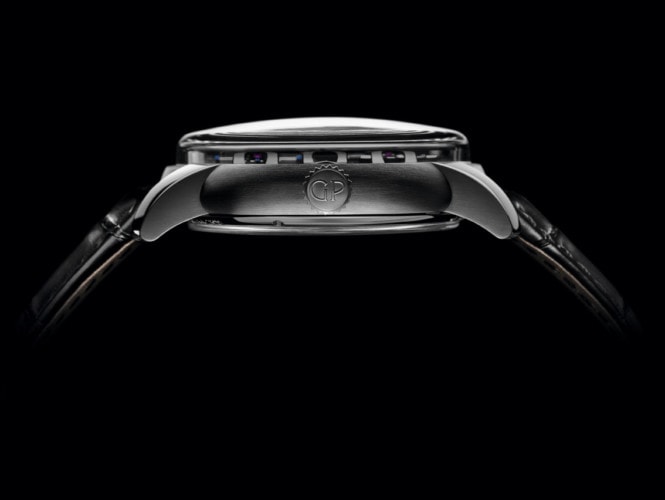 Dominated by sapphire rather than titanium, the case is built so as to maximise the view of the movement, itself based on the principle of transparency. The dial-side crystal is of the glass box type, steeply cambered and convex. It rises vertically from the case, before changing angle to cover the heart of the watch, like a protective dome. The caseback crystal is also convex, meaning that, when viewed from the side, the Neo Tourbillon with Three Bridges Skeleton is a band of grey metal with a matt appearance achieved by satin brushing, framed by two sapphire protrusions.

These scratchproof, complex and chemically pure crystals thus reveal the structure of the GP 9400-0011 calibre, a profoundly revisited version of Calibre 9400. This restructuring mainly consists of skeleton working that basically involves eliminating the baseplate. Almost as if the ground had vanished beneath its feet, the movement finds itself suspended between two layers of air. Certain indispensable anchor points remain, but the opaque and solid supporting structure has disappeared. A closer look shows the screws holding the openworked, polished and bevelled bridges, driven far into the structure of the calibre. They are like the abutments of a suspension bridge, offering deep anchorage as well as an impressive technical demonstration.

The underlying part of the movement baseplate, which is solid on Calibre 9400, is replaced here by two bridges. The latter are exactly identical to those on the dial side: a first in a structure based on visible bridges. These two bridges are the counterparts of the gear-train bridge (in the centre) and the tourbillon bridge (at 6 o’clock). 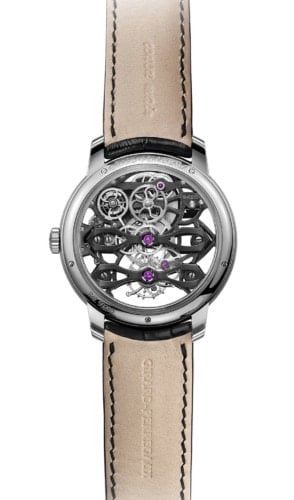 Dial: no dial, no ring

Winding: unidirectional via an 18K white gold micro-rotor, coaxial with the barrel

In this natural and eagerly awaited extension of an eminently sporting chic collection, the Laureato once again demonstrates the strength and relevance of the design of this iconic watch, born in 1975.

Girard-Perregaux has fitted this emblematic case with its self-winding chronograph movement, driving two counter and small seconds as well as a date display. As well as guaranteeing impeccably accurate timekeeping, it is distinguished by its comfortable power reserve and the particularly smooth activation of its pushers. Its horological qualities are complemented by exemplary finishing including “Côtes de Genève”, chamfering and straight graining.

The Laureato is defined by a polished octagonal bezel fitted on an integrated case, meaning with no lugs or loops; as well as by its metal bracelet forming a natural extension of the case and representing an original design element in its own right.

This metal bracelet is distinguished by wide satin-brushed H-shaped links as well as domed and polished interlink elements. When worn, this bracelet reveals the most important quality of all: an exceptionally soft, supple feel. It makes the Laureato perfectly comfortable on any wrist. 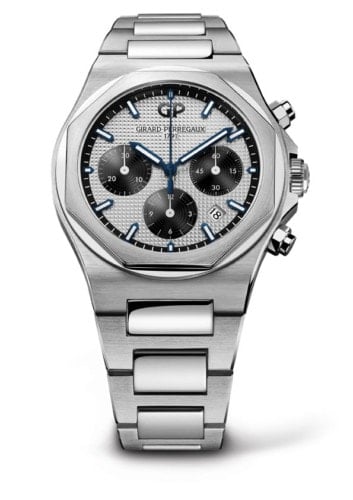 Find out more about the Laureato Collection here.

By definition, the Laureato is adorned with a dial bearing the “Clous de Paris” hobnail motif, a set of small raised pyramids occupying the watch face and catching the light. Sporty because of its sturdiness, chic because of its meticulous details, it is designed as much for grand occasions as for relaxed daily wear. Its versatility stems from intense reflection on the principles of ergonomics, volume and style, giving rise to a broad array of chronograph versions.

The Laureato adjusts to the demanding layout of the various subdials and pushers characterising the Laureato Chronograph. The exterior of the Laureato case has evolved to incorporate a crown guard (shoulder), a curve naturally imposed by the pushers themselves. The latter are octagon-shaped like the bezel, creating protuberances that the Laureato Chronograph incorporates with natural ease. The dial comes in a choice of silver-toned, black or deep blue versions. The two counters and small seconds subdial all feature a snailed finish that ensures they stand clearly against the background. They bear simple and slender hands facilitating reading without overloading the dial. 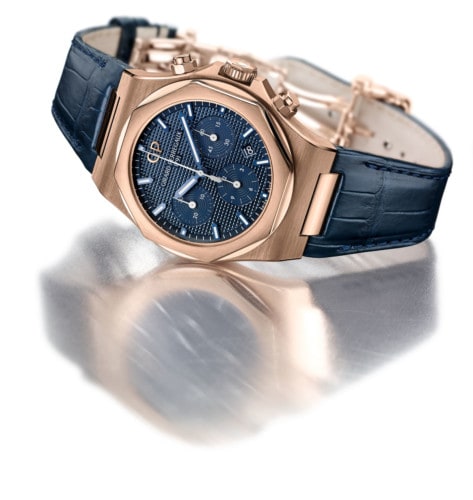 Hot Topics
A Californian Controversy: The Origins Of The Term “California Dial” And Why It Can Mean Two Very Different Things…
49 comments
What Zenith Is Doing Wrong With Its Pilot Line And How The Brand Could Fix It
32 comments
The Best Omega Watches Of Daniel Craig’s James Bond Era — Have Your Say!
27 comments
Why The Rolex GMT-Master II 16713 “Root Beer” Is Better Than The 126711CHNR “Cough Syrup”
26 comments
Here Are The Best Grand Seiko Watches Of 2021
23 comments
Popular
The Ultimate Sports Rolex – The Explorer II Reference 1655
Robert-Jan Broer
12
Hands-On With The Seiko Prospex Dawn Grey Series
Robert-Jan Broer
6
Rolex Submariner Hulk versus Seiko SLA019 : Shades of Green
Michael Stockton
23