Welcome to This Week in Watches on January 12, 2019. This week, we saw some heavier traffic on the news front. It’s the second week of the year after all and that means most folks were back to work (aside from the German state of Hessen – thanks for making the Autobahn great again! – if only for one week). Of course, next week is SIHH where most of our team will be, so expect more new releases from the show, but also from non-attending brands that seek to steal just a bit of that limelight. And let’s be honest, it’s 2019 and brands seemingly don’t need a show any longer to justify a release… 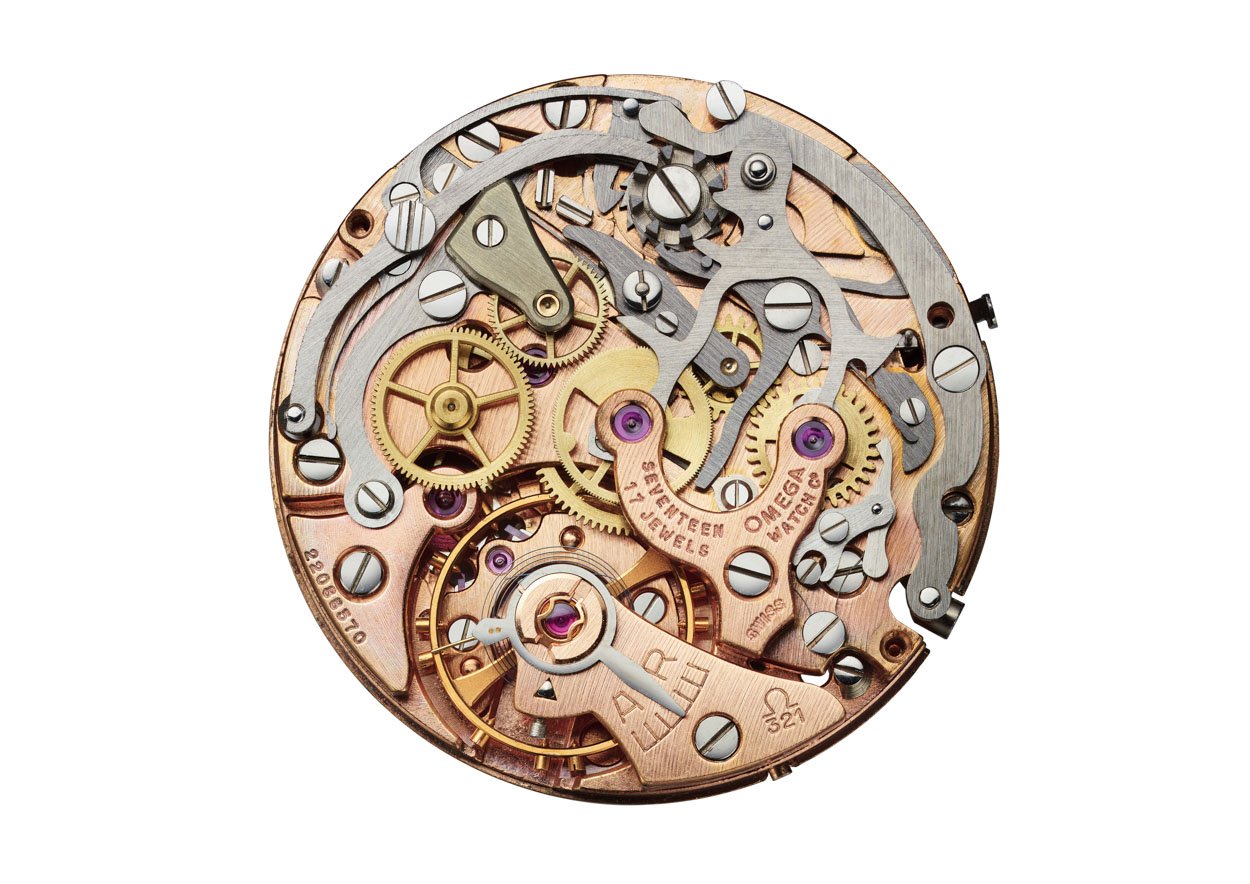 This week was a big week for Omega. After all, they reintroduced the legendary caliber 321 movement, a column-wheel chronograph that was found inside the first Omega’s in space. The movement is an exact reproduction of the old model, which apparently took some real reverse engineering in order to instill some old-school watchmaking techniques where modern methods may seem more obvious. Apparently, the tolerances are tighter, though, and we can expect a reliable timekeeper. By the way, for all of you out there who are asking, “why should I care so much about this movement?” I’ll make an analogy and I don’t think I’m overstating things when I say that Omega’s announcement is damn near akin to Porsche announcing the return of the air-cooled six. Sadly, we haven’t received that news from Zuffenhausen, but yes, Omega was a big deal this week.  Here’s a link to Omega’s official press release. 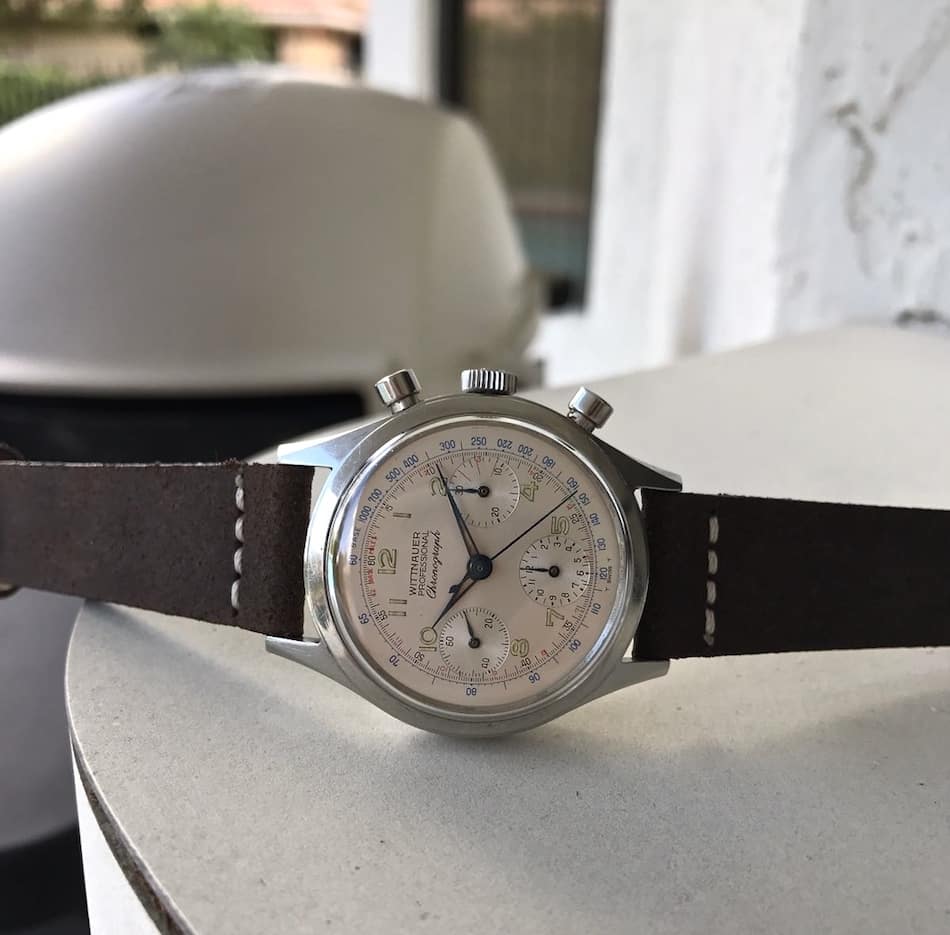 The Other Watches Tested by NASA

In what was, for me, almost as big a deal as the reintroduction of the caliber 321, we learned the identities of the other chronographs tested by NASA during a learning forum at Omega HQ. In its search for the official astronaut’s watch, NASA tested the Speedmaster 105.003 “Ed White”, the Rolex 6238 “Pre-Daytona” and the Wittnauer 235T. We’ve received a lot of feedback from you on this news and in response to one person it was news. Just a day or so before we wrote the story, we saw more than one knowledgeable person posting pics of the far more valuable Wittnauer 242T and at least suggesting that it could’ve been the tested watch. We now know for a fact that it wasn’t. Second, and more importantly, many of you have asked about the technical differences between the Lemania 321 and the Valjoux 72 that likely gave the former movement an edge during testing. We’re working on obtaining that info and once we get it, you’ll get it too! 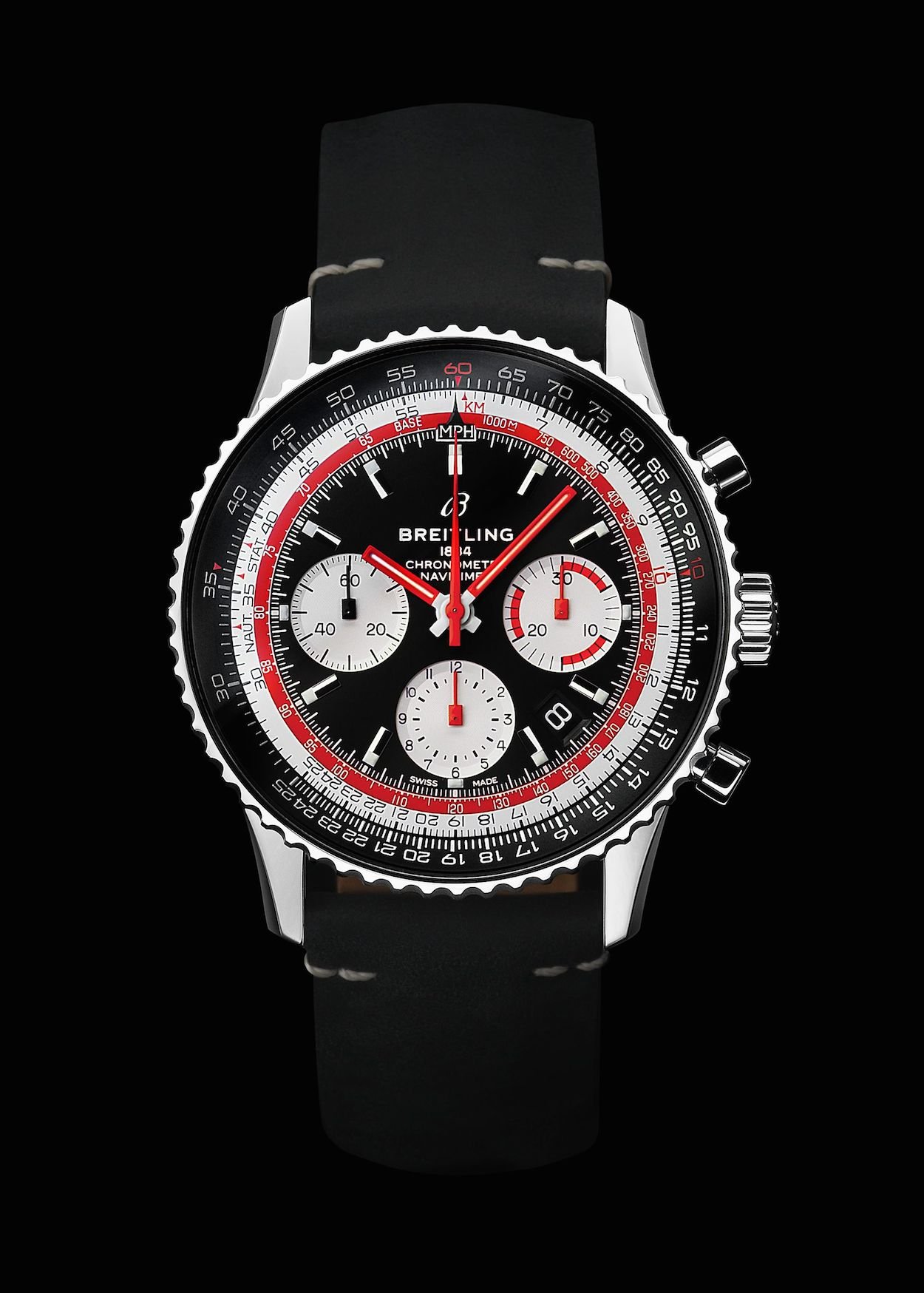 Late yesterday, we dropped a brief article on the new Breitling Navitimer Swissair Edition. There was a lot of traffic on this one – both on the site and via Instagram and much of it was positive. The bright colors are absolute reminders of glorious past chronographs from the brand, but the overall look is still fresh. After all, Breitling never offered such a colorful Navitimer in the traditional case. Some decried the 43mm diameter, but one should remember that the original ref.806 Navitimers were 41mm. While I’ve not brought out the calipers, I’d guess that some even approached 42-43mm as the bezel became wider. Navitimers have always been big – just be happy that this isn’t 47mm. We expect more “Airline Editions” very soon and we’ll happily cover them. For now, you can head to Breitling for official info on this piece. And finally, while we don’t know anything in particular, we’re pretty damn sure that Breitling is up to some pretty interesting things that will tickle the fancy of the vintage set… 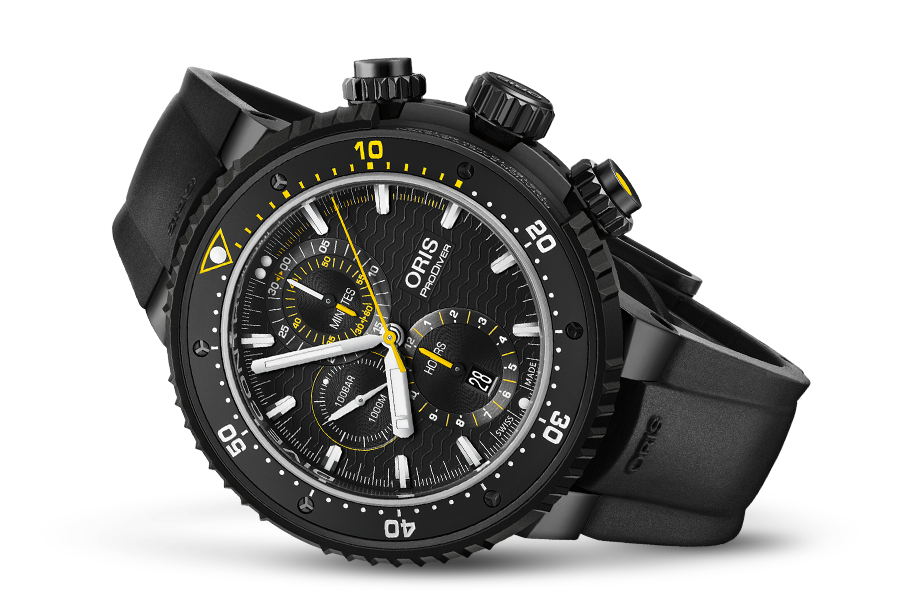 Speaking of large watches, Oris showed its new Prodiver Dive Control Limited Edition. At 51mm and with a DLC titanium case, that’s a spicy meatball. Still, this is familiar territory for Oris, a brand that seemingly does well with these large, somewhat over-the-top, and limited edition divers. With only 500 made, the new Prodiver should sell easily. As far as functionality, the watch contains a modification to the SW 500 movement that allows for a full 60 minutes counter at the 12:00 register versus the normal 30 – helpful for diving. Furthermore, it has the “Dive Control” bezel, which is essentially a lift and turn, then drop into place type of mechanism. I’ve played with this on other models and it’s super smooth. Pricing will be 4,800 Euros in Germany.  Head to Oris for more information and expect a deeper review here soon. 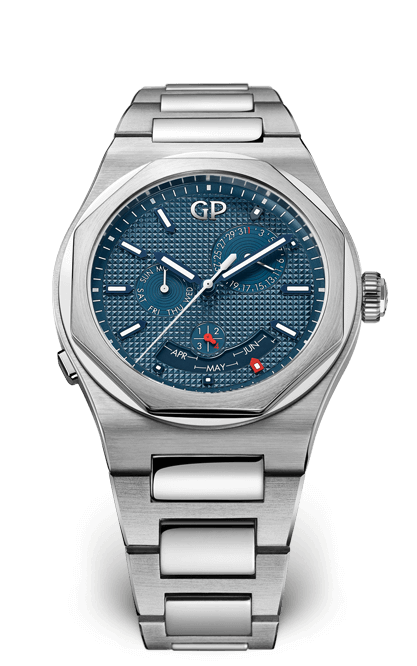 In a not-so-surprising move, Girard-Perregaux announced a Perpetual Calendar within for its Laureato line. The Laureato, since its introduction in this form a couple years ago, has been a bit of a controversial watch. With looks that remind most of both the AP Royal Oak and the Patek Nautilus, it’s received its fair share of criticism. Well, as those famous watches offer a perpetual calendar, we can now say that the GP does as well. The 42mm Laureato contains the in-house caliber GP01800-0033 and will retail for 34,500 CHF. Some seem to like the funky asymmetric dial design, while one creative Instagram “agent provocateur” likened its visage to that of Quasimodo. We’ll see for ourselves next week, but head to the GP site for more information for now. 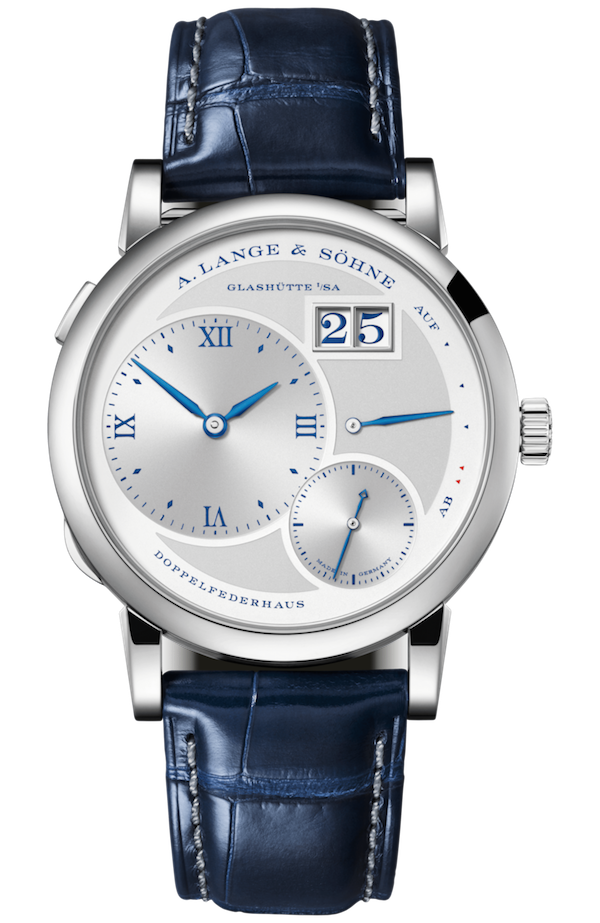 I’ll admit that Lange & Söhne isn’t in my typical wheelhouse, but I have a soft spot for the brand. I still recall when they reentered the market. It was at a time when my Dad and I would cruise the jewelry shops – whether at the local mall or on some Caribbean Island at a duty free spot – and Lange entered the fray. The watches were just as serious and dressy looking as the Pateks, Vacherons, Audemars, Breguets, and Blancpains, but those date windows were something different. At that time, though, a watch salesperson had a real job to do in order to turn one’s attention away from those longstanding brands. It’s nice to see that Lange has had such a successful journey and it’s fitting that they commemorate the 25th anniversary of their return with a limited edition (250 pieces) Lange 1 – the watch that re-started it all. In white gold and at 38.5mm in diameter, the manually wound L 121.1 is at the heart of things. A solid silver “argenté” dial with blue detailing and matching blue alligator strap bring some color to the overall presentation. Lange already has information on their site regarding this important piece and we’ll go hands-on next week. 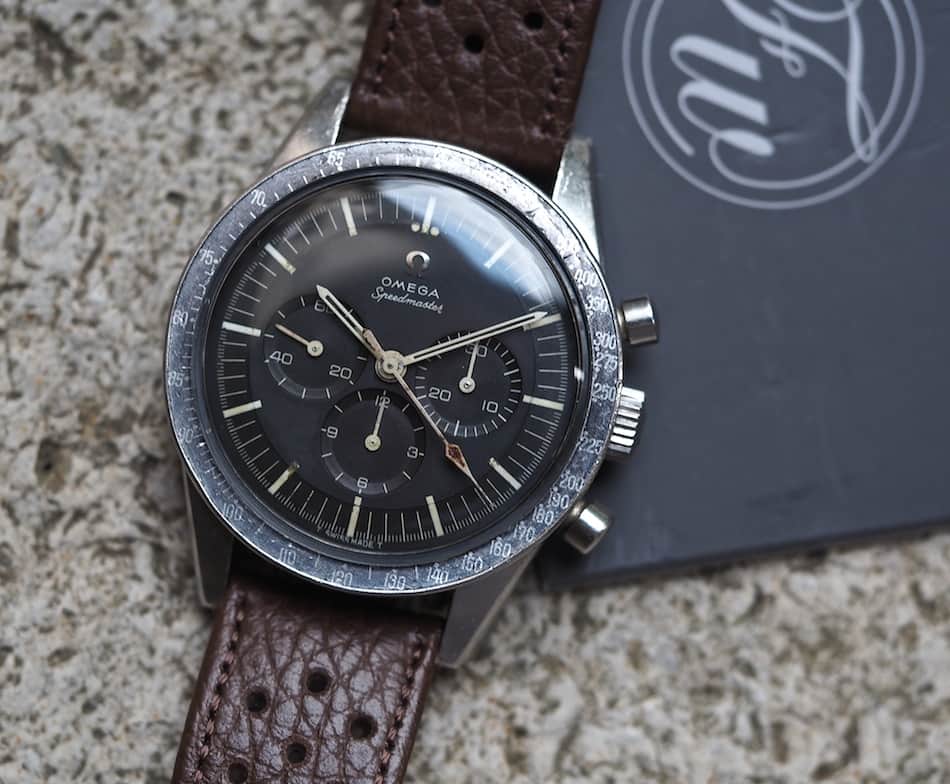 A Personal Note on One of My Speedmasters

Sorry to hog up space with a personal story, but hopefully you’ll allow the indulgence. If you follow me on Instagram, this isn’t news…but let’s call it my “Good Will Hunting” moment when Matt Damon is trying to obtain Minnie Driver’s phone number. Perhaps you recall the scene in the movie when he knocks on the café window and asks the highbrow Ivy League crew if they like apples… Anyhow, during our visit to Omega, I had the chance to visit the archives and got up the courage – after over two years – to ask about my ratty 105.003-65 Ed White (here’s the #TBT article on the watch). With a 25.4 million serial, I figured the movement was a transplant from something else. Well, the good team at Omega looked it up in moments and confirmed that the movement belonged to my watch and it was manufactured in 1968. Great news, but where was it delivered and when? That information is not currently digitized and the team explained that they would need a day or two to dig through the archives. Now, I’ve mentioned that my watch was battered about on the forums while it was still up for sale on eBay. It had been listed out of Venezuela over and over without a buyer. It had a modern Omega crown, the wrong crystal, a bracelet that was a hybrid of an older clasp and newer 1171 links. Well, I saw a nice case, a nice gray DON bezel, and something that could perhaps help aid my other, over-polished, Ed White. The seller changed the sales location to Florida, which felt safer to me, so I bought it. Once received, the watch was too nice to break up and it’s stayed together since its service. But coming back to this week, I received an email from Omega with some very simple information. My 105.003 was shipped on October 30, 1968 to – wait for it – Venezuela. Oh, and that older clasp that’s been grafted to newer links? It’s a 1039 made in the 4th quarter of 1968. How about them apples?

That’s it for This Week in Watches – stay tuned to Fratellowatches for what will hopefully be a flood of news from SIHH.

Hot Topics
A Californian Controversy: The Origins Of The Term “California Dial” And Why It Can Mean Two Very Different Things…
49 comments
What Zenith Is Doing Wrong With Its Pilot Line And How The Brand Could Fix It
32 comments
The Best Omega Watches Of Daniel Craig’s James Bond Era — Have Your Say!
27 comments
Why The Rolex GMT-Master II 16713 “Root Beer” Is Better Than The 126711CHNR “Cough Syrup”
26 comments
Here Are The Best Grand Seiko Watches Of 2021
23 comments
Popular
The Ultimate Sports Rolex – The Explorer II Reference 1655
Robert-Jan Broer
12
Grand Seiko SBGA211 ‘Snowflake’ And Why I Didn’t Buy It
Robert-Jan Broer
20
#TBT A Vintage Seiko Buyer’s Guide to Affordable Goodness
Michael Stockton
28