For a long time I thought it was just a coincidence, that watch collectors surrounded themselves with high quality products, but I now know that many of them share a similar preference, when it comes to high quality devices, clothing and other items.

A brand that can be found more and more among these watch community guys, is Astell & Kern. 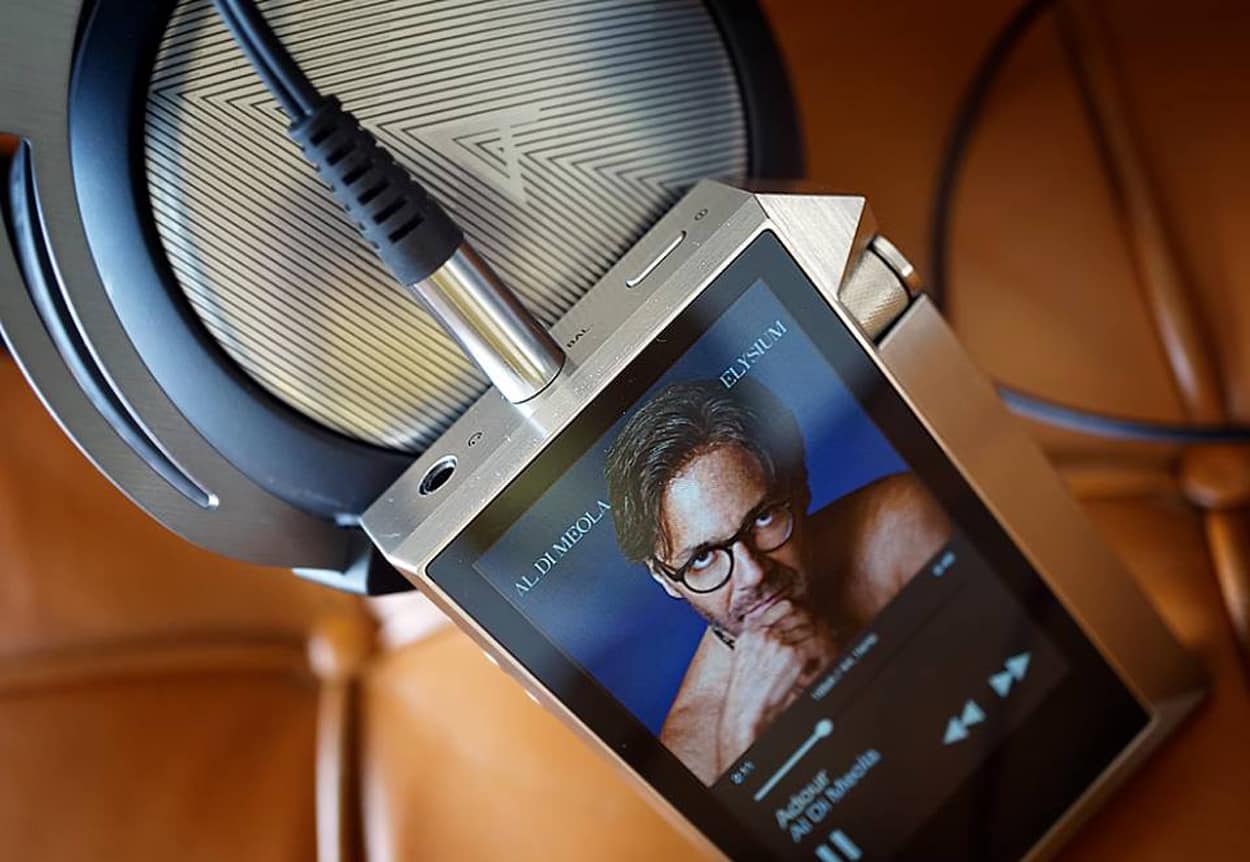 – AK240 in steel with the AKT5p Headphones, using the balanced input on the player –

Most of my watch friends around the globe own a few watches made by high-end brands like A. Lange & Söhne, Patek Philippe, Audemars Piguet and of course from independents like the highly popular Urwerk, Hautlence, Max Büsser & Friends as well as others. Watch connoisseurs go for quality, and have a preference for exclusivity, therefor they’re often surrounded with products from brands like Leica, Vertu, Rimowa or Berlutti. Astell & Kern fits right in with these brands and I noticed quite a few players present amongst my friends. This doesn’t surprise me, since Astell & Kern delivers a top quality product and shares all the key factors ,with the just mentioned brands. Especially in terms of exclusivity and  quality.

Astell & Kern is a fairly small independent Korean audio brand, (specialized in ‘personal audio’) that derived from the iRiver Group in 2012. The brand started with a few high end portable audio players, and became in short time, the leader in ‘High End Personal Audio’, with players like the AK240 and AK380.

Vice President James Lee and Marketing Manager Alex Ann, run the company fairly different from the competition and actually a bit like some of the exclusive watch brands do. The Korean brand keeps in touch with their users by organizing meetings and dinner parties, on a small scale, where products can be seen and tried, questions asked and most important, have a great evening with good wine, food and friends. 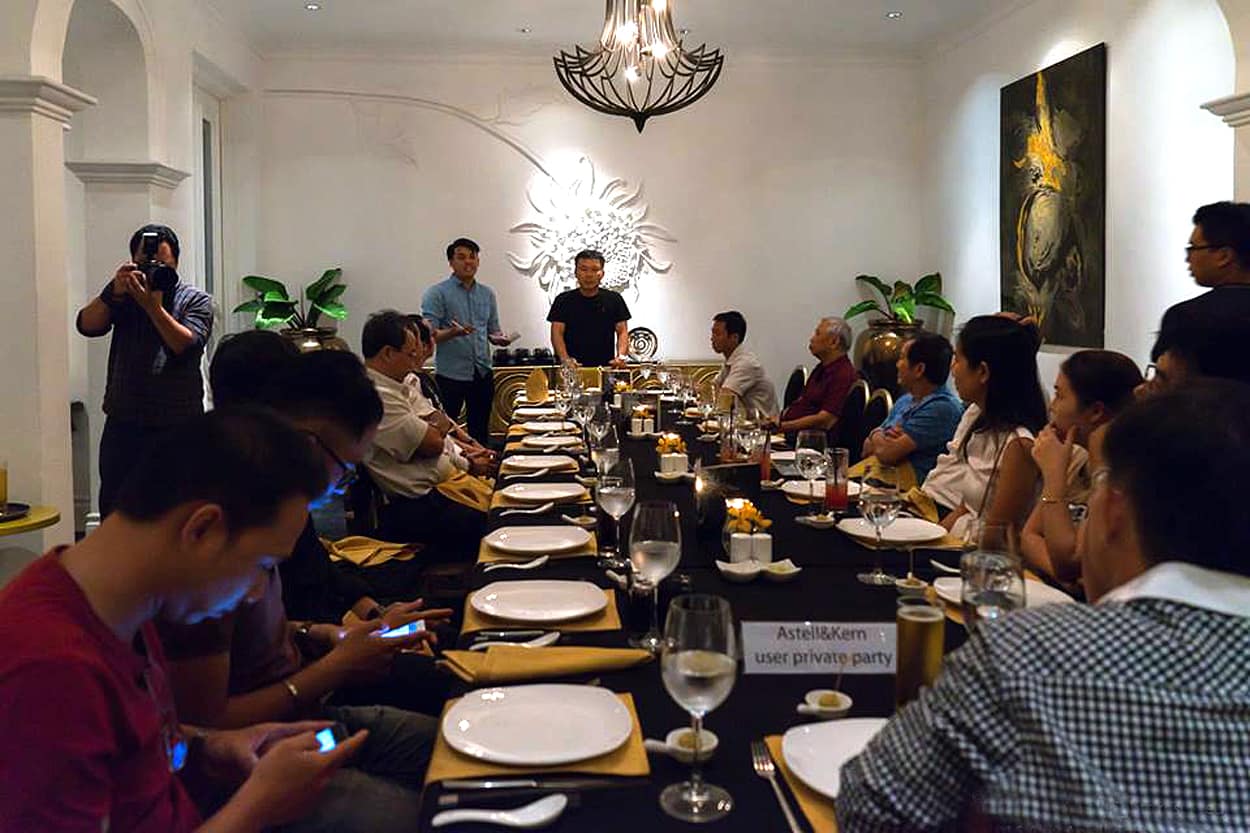 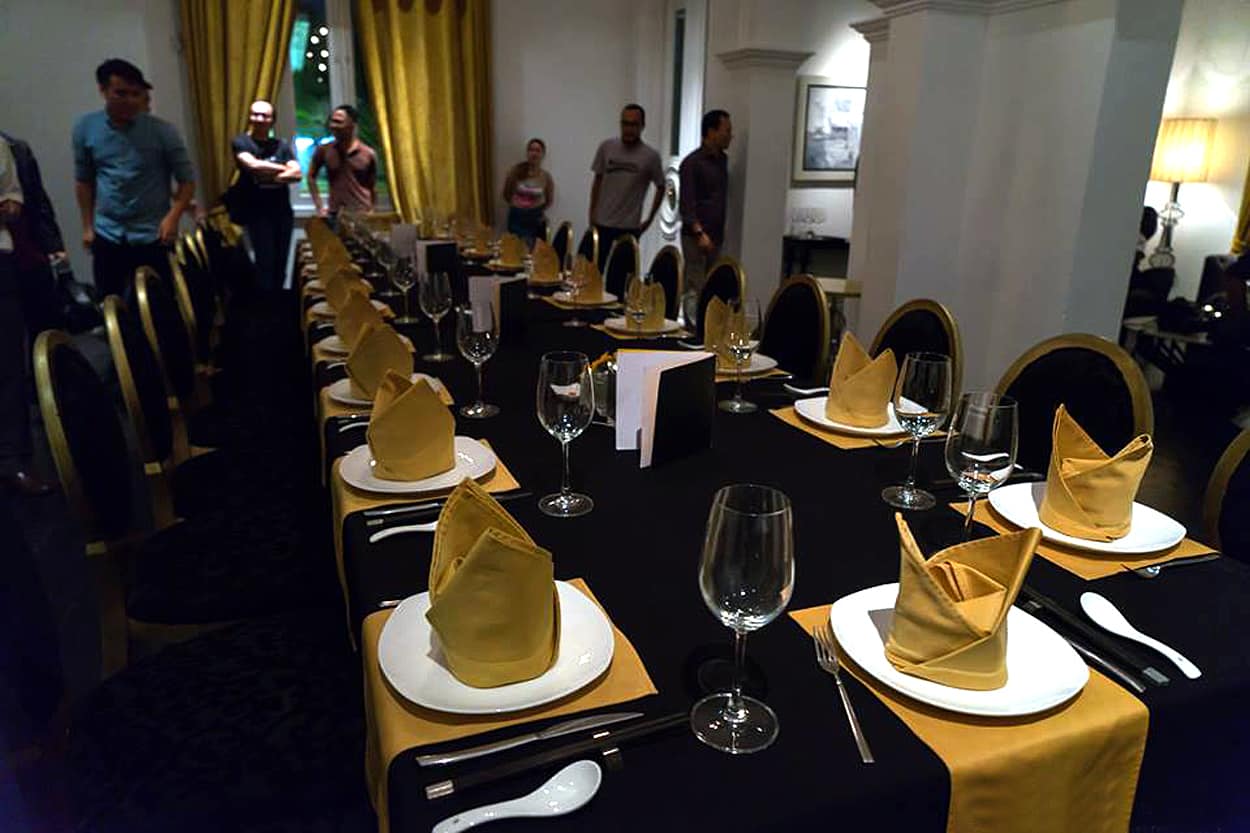 Astell & Kern does that quite often, like this party in Ho Chi Minh, that just took place last month. I attended earlier parties in Singapore and Hong Kong and I could taste the passionate atmosphere among the guests. Although not planned yet, I am sure these gatherings will also take place in Europe and in the USA in the near future as these markets are expanding.

Of course, these players will work well with your MP3 downloads, but they really start to show off their true potential when they will be loaded with albums in FLAC or WAV format. I come to that in a minute.

Let’s first have a look how these players are designed and why they’re so different from other players. While most players are packed in a boring rectangle cigarette shaped box, Astell & Kern is about a design that elevates its look and feel. The shape of the 300 series is so eye catching and different, that I can imagine, some folks have to get used to it. This is where design meets functionality. Unexpected lines and angles work together to improve the ergonomic of the case. 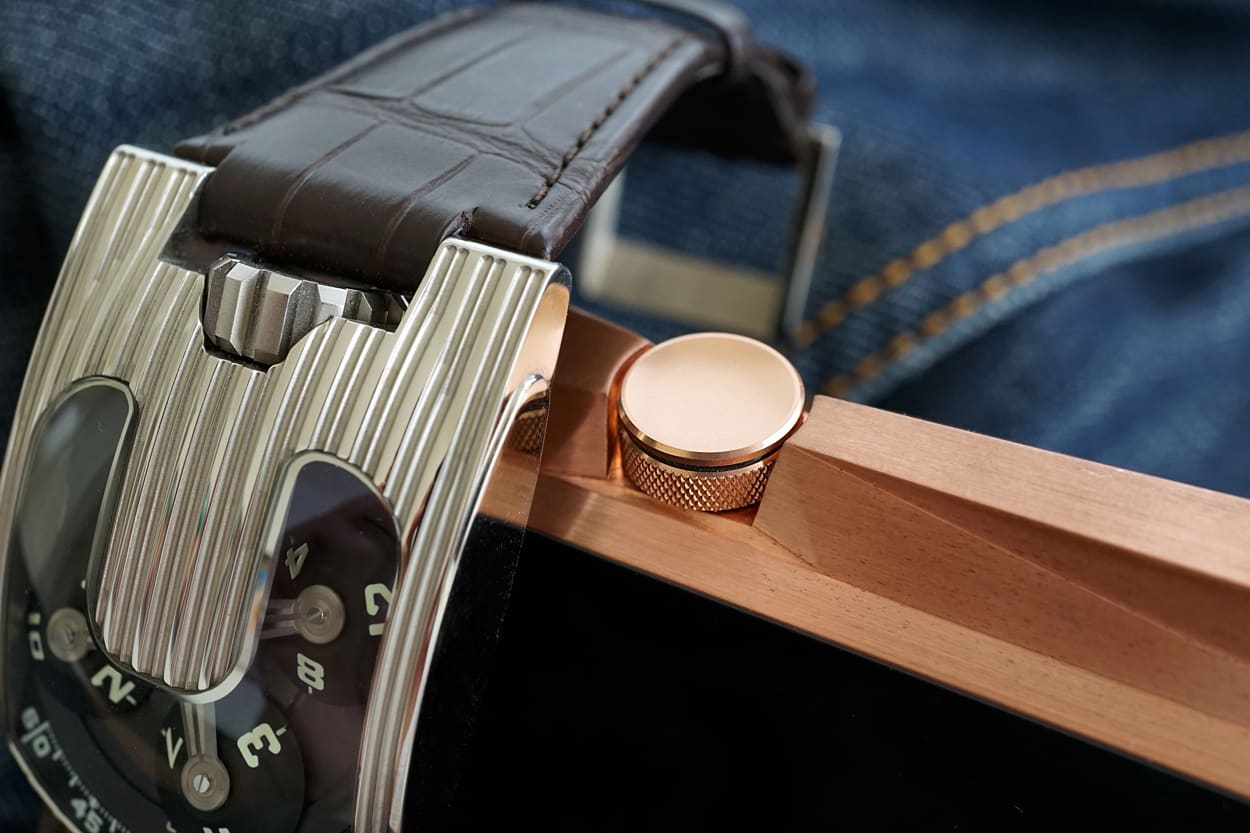 The  large volume control of the AK380, build into the side of the case, to protect it, speaks to me. It looks like the crown of this Urwerk snugged into the case, or the crown of a Rolex between its crown guards, design with a reason.

Duralumin is often used for the case of Digital Audio Players also at Astell & Kern, but the team decided last year to launch a limited edition of the AK240 model, in stainless steel. 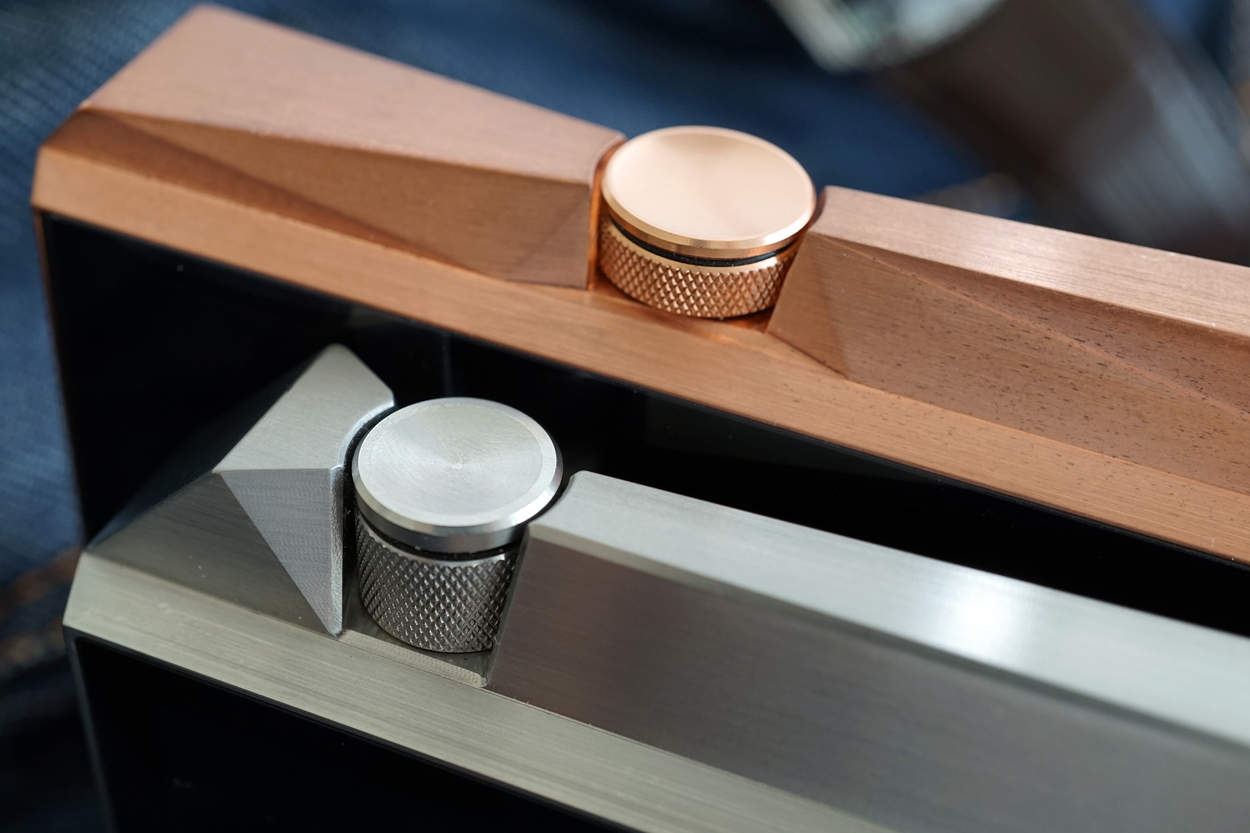 Not because of the looks, but because the stainless steel case solves the problem of grounding. And grounding is an important factor, that can affect the sound of a personal player. The Duralumin version of the AK240 has a limited ground area, due to the material used. Stainless steel, provides more ground points, on a larger area. And that results in an improvement in sound quality. According to the community at the various personal audio forums, the result is a wider sound, deeper bass and more defined mids, than the same model in Duralumin.

An even greater improvement in sound was reached this year, when Astell & Kern turned their top of the line player, the AK380 in a copper version, also build in a very small limited edition, that found its way to the hard core fans, in no time.

Many people have a large CD collection and since it is not easy for everyone to transfer these CD’s into a FLAC or WAV file, the engineers from Astell & Kern came up with a portable CD Ripper, that can be connected to the current line up of A&K players. The Ripper is housed in a case made in Duralumin, of just 15 x 15 cm. 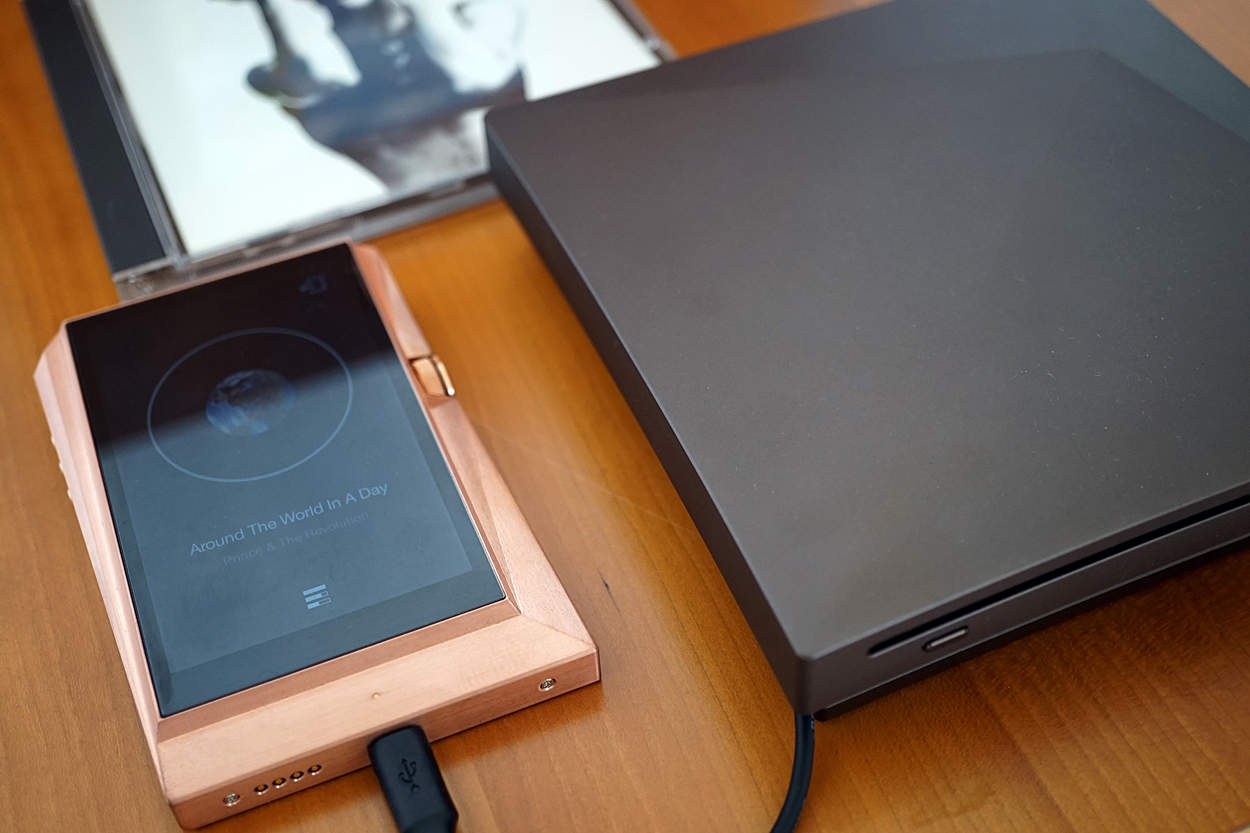 When a CD is pushed into the Ripper, one only needs to select the format and ripping speed and the process starts almost automatically. The WiFi equipped Ripper finds its way on the internet, collects the album cover and start to rip the CD into the desired format. 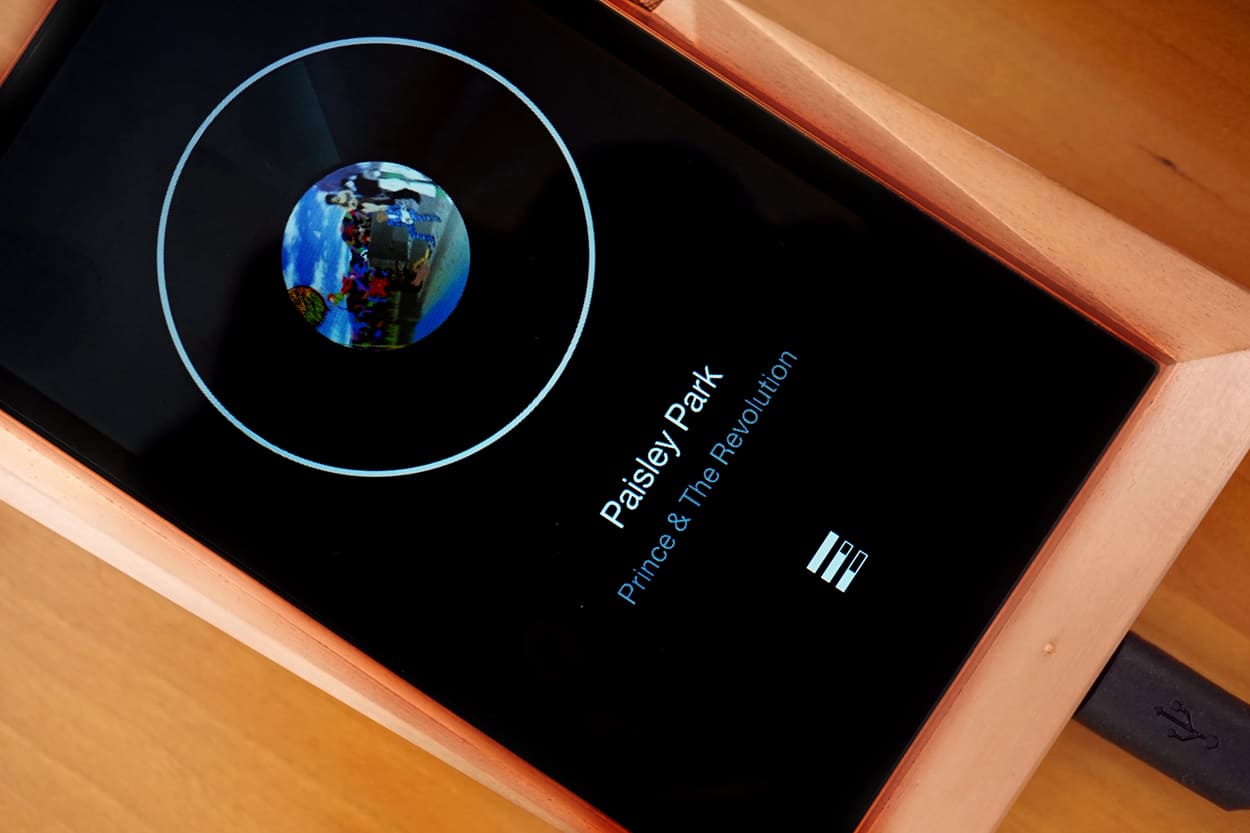 The process can be followed on the screen of the Astell & Kern Player and when the process is finished, the album can be found in the music section of the player. To me it works very easily and find it ideal to have it with me, when I go places. Another way to get all kinds of music in FLAC or WAV format is Bandcamp.com, or HDtracks.de and HDtracks.com (depending on your region).

Digital Audio players are often used with smaller headphones or with the so called  ‘In-Ear’ phones, but since the real fanatics would love to use their power hungry full-size Audeze, MrSpeaker or other headphones some audio brands came up with portable amplifiers, to be connected with short wires to the player. That sure worked, but it was far from  convenient and looks always a bit sloppy. 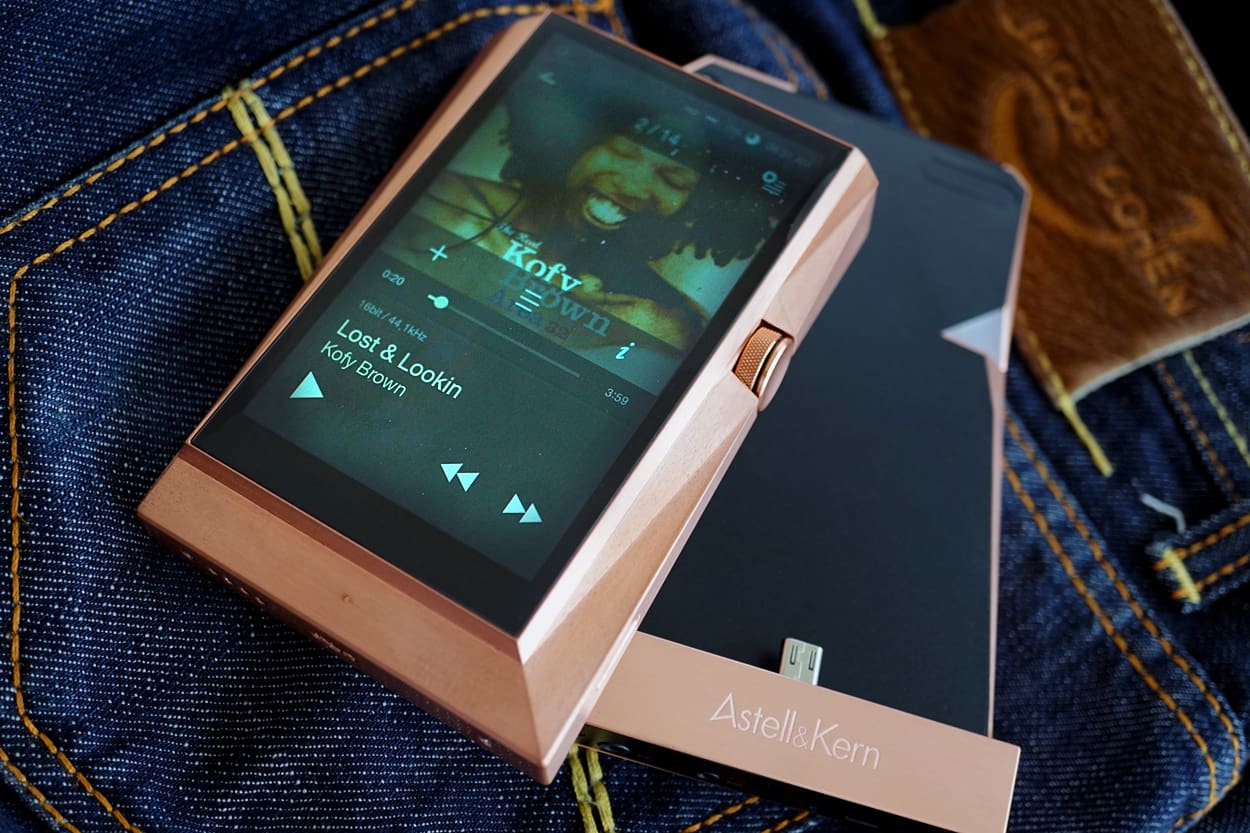 Astell & Kern, always keen  to combine design with convenience, solved that issue and released a clip on amplifier for their 300 series. The amp is basically a flat amplifier, that is clicked underneath the player. Of course this adds some weight, but in return, it becomes one handy unit and adjusting the volume for instance is still be done on the player. 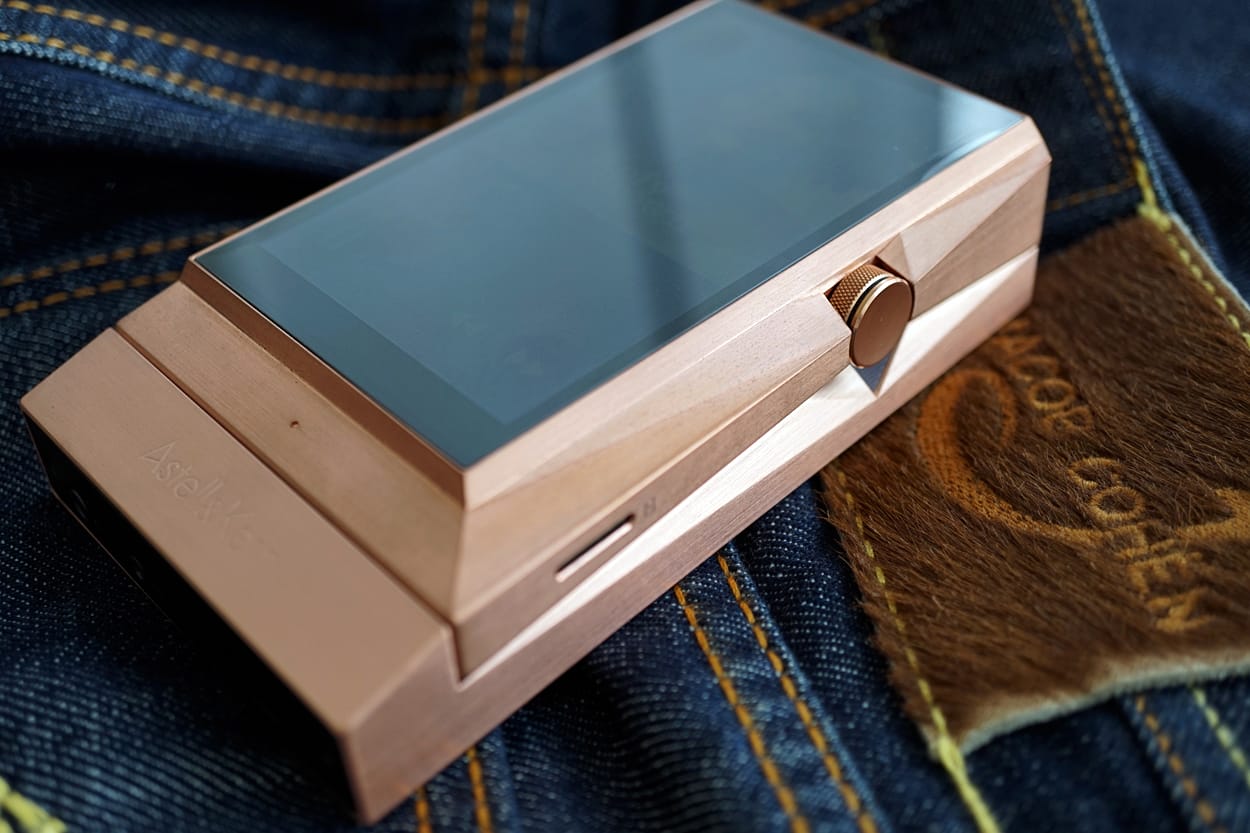 Same with powering the units, not two power plugs are needed to charge them; both charge together with just one cable which is, especially on the go, very convenient. Astell & Kern, that always provides very luxury hand-made leather cases with their players, doesn’t  make a leather case for the 300 players with attached amplifier. 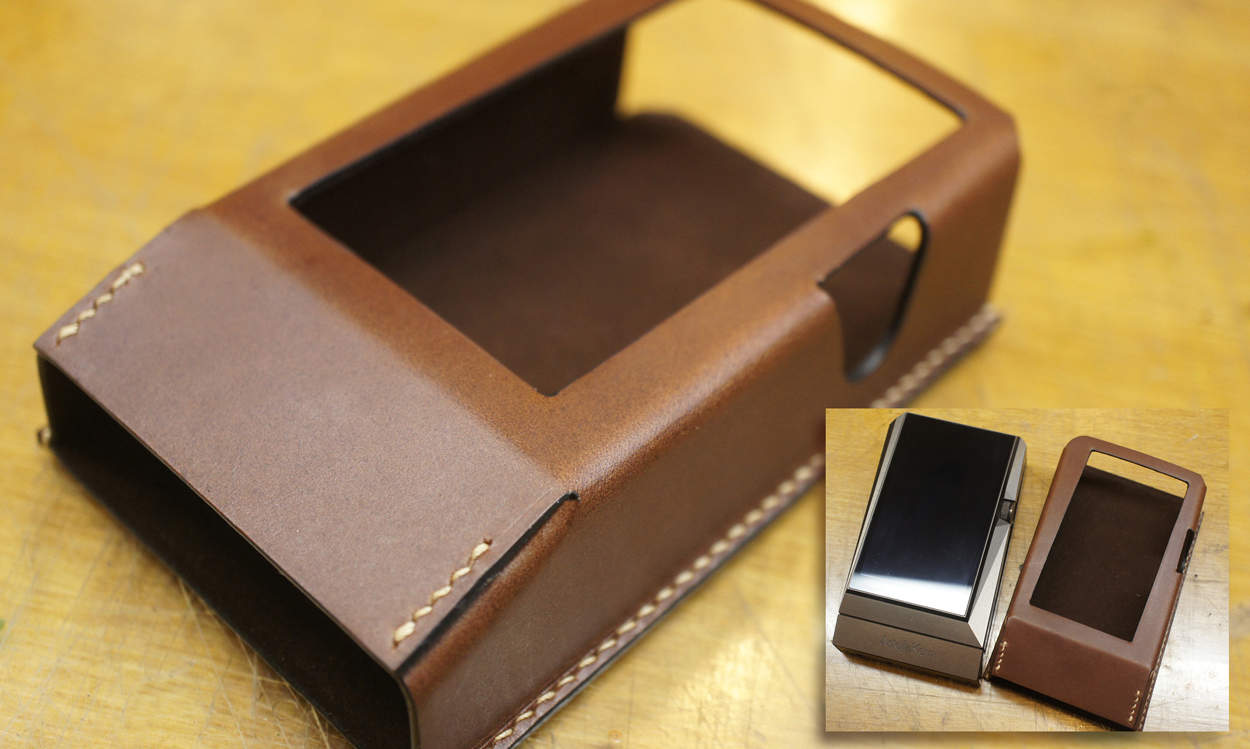 – Hand made leather case by Aesopica –

But like many small independent leather companies make cases for your Leica and straps for your Panerai, AESOPICA in south Korea helped out and created a very good looking, also hand made leather case for the AK300 series with attached amplifier, that is an ideal protection, especially during traveling.

In case you have an LP collection; their latest development is the Astell & Kern Recorder, that will be clipped on underneath the player, just like the amplifier is clipped on. The AK Recorder is suitable for any and all forms of recording, whether it be a live concert, an interview, a meeting or an analog LP signal. 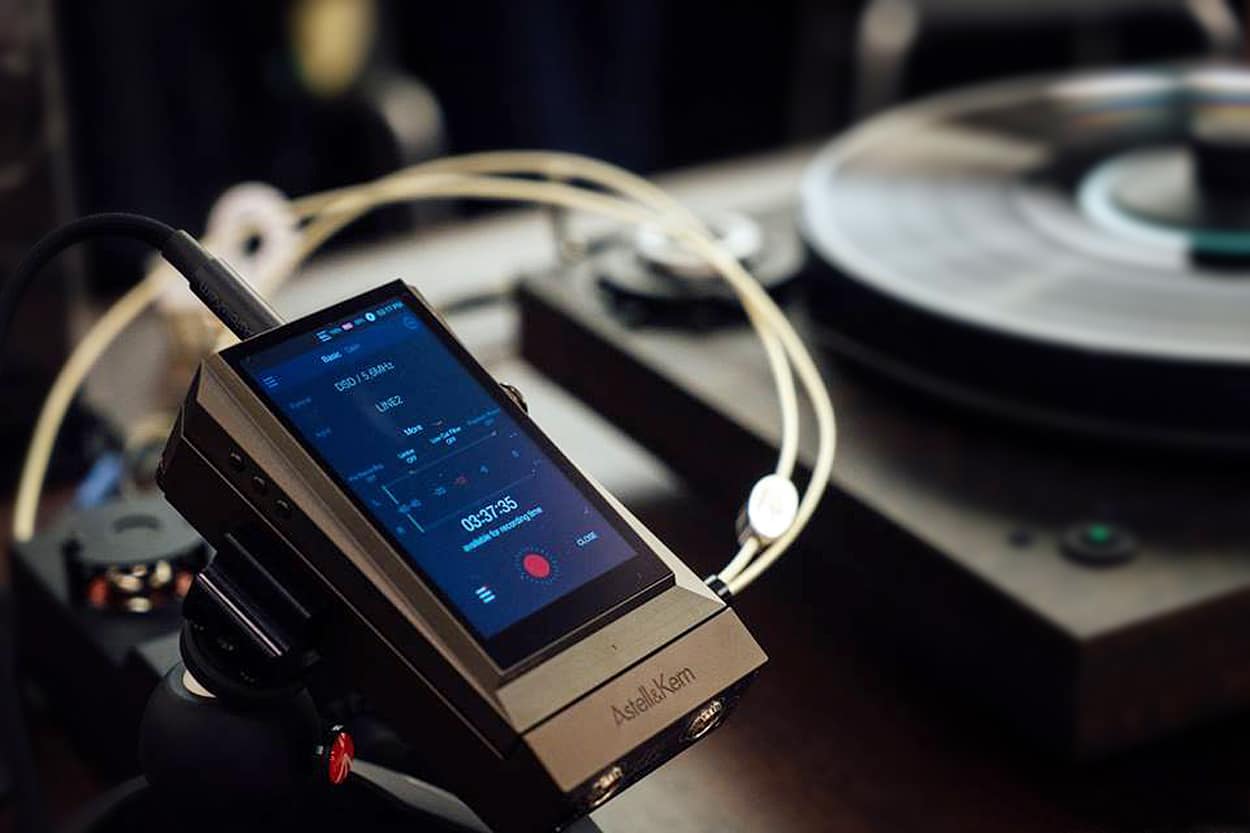 AK380 with the new Recorder attached, while ripping an elpee –

It is even able to make a perfect  FLAC or WAV copy of an elpee, since it can be connected to the phono amplifier of a turntable, to record analog LP signals, as a perfect digital signal and connect easily with products that have digital-out ports via the AES3(AES/EBU) digital input ports. 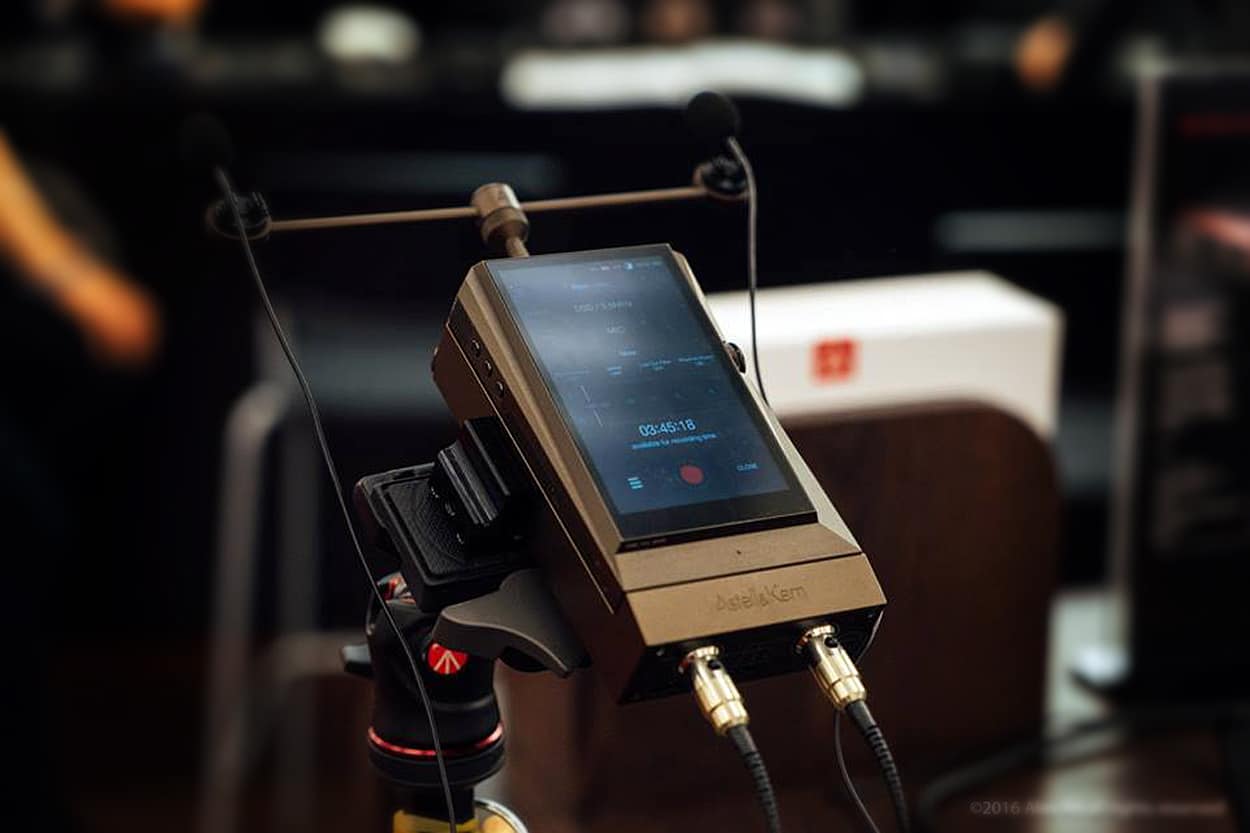 – AK380 and the new recorder during a life recording, using microphones –

But this is a truly professional recording device, that does much more than making copies of your elpee collection! It provides studio-quality sound and is a pretty amazing recorder that offers a wide range of features, such as DSD 5.6MHz recording (the first of its kind in a portable  recorder), support for professional condenser microphones  through independent phantom power, detailed control of microphones and pre-amplifier Gains, an interface that spans both analog and digital, a digital limiter for professionals, a peak hold, a low cut filter,  and support for a number of recording options  including pre-recording. A superb little machine that can be taken anywhere, to do a great job during a concert, or to do a simple digitization of an elpee, at home on a Sunday afternoon.

Astell & Kern takes music very seriously and their 300 series are the only players on the market today, that offer you, besides the best sound, also ripping and recording possibilities.  It’s is one of those  brands that understand very well, what people expect, when they’re willing to pay a bit more, to get that one exclusive product, that matches their life style.

Watch of the Week
1
1 Comments