A. Lange & Söhne Introduces The 1815 Rattrapante In Platinum

Previously only available as a special Honeygold version, the 1815 Rattrapante now makes its way to the regular collection
Jorg Weppelink
comments 8
Share

Watches come and go during the year. Working at Fratello is an absolute joy because you get to wear and review so many different pieces. Some of them get added to the “list of wants”, while others fade out of consciousness as quickly as they came. This year has already been very special, despite being only halfway through it. Back in February, I had the chance to wear my ultimate Lange dream watch for our series of articles on our editors’ grails. The A. Lange & Söhne 1815 Rattrapante Honeygold “Homage to F. A. Lange” is everything I could ever want from a watch. I explained in detail what makes the combination of the design, the technology, the materials, and the finishing such an outstanding timepiece. To this day, I sometimes think back and remind myself how much loved wearing it. It was a true horological dream. 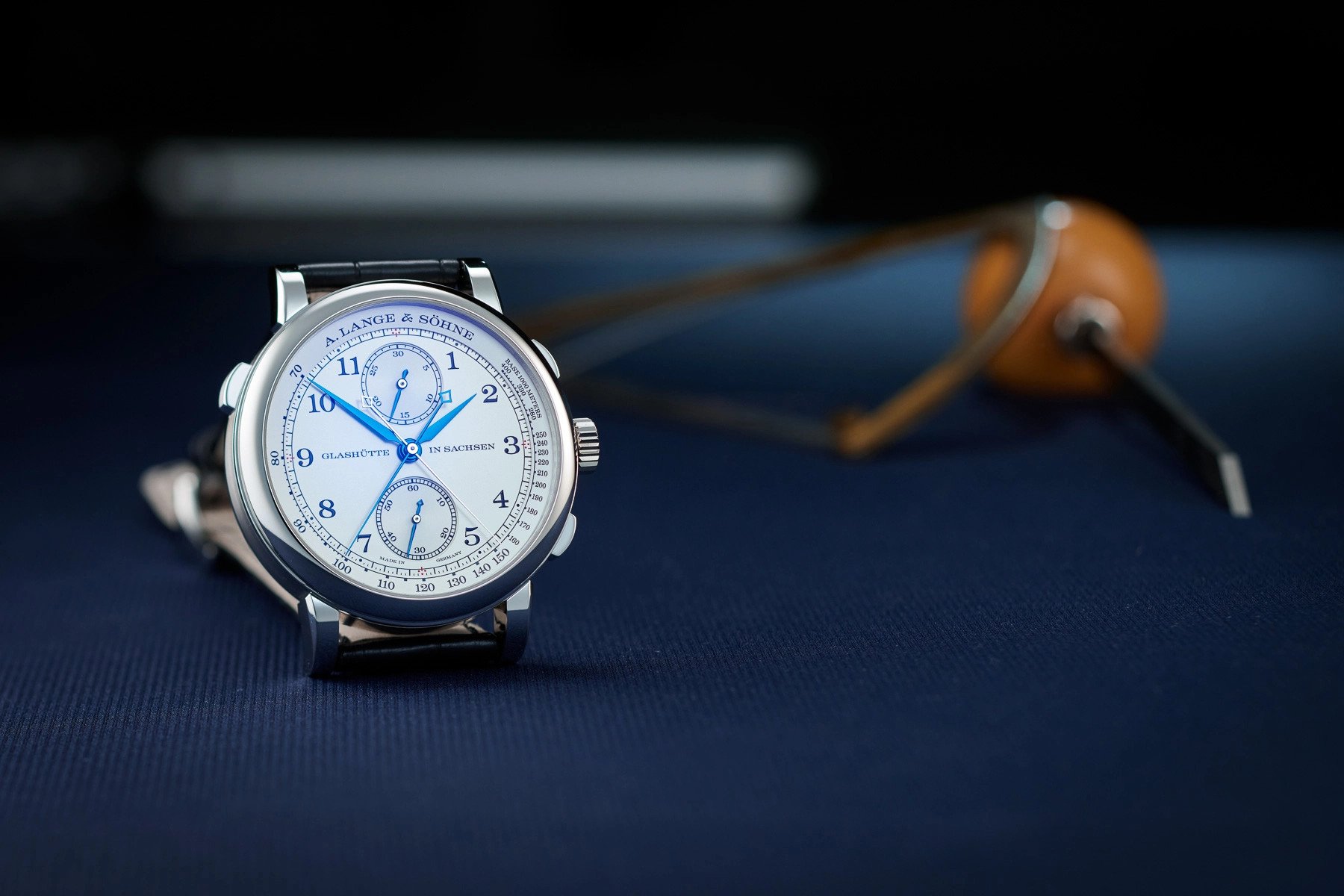 With the release of the platinum 1815 Rattrapante, A. Lange & Söhne follows up the release of the special “Homage to F. A. Lange” edition. Although limited to a production of 200 pieces in total, this is technically the first regular production model of the 1815 Rattrapante — “regular” meaning that it’s not a special edition. Let’s remind ourselves of the brilliance of this particular model and find out what makes this platinum version different from my grail watch. Could this be even better? You probably already know the answer to that, as I adore the combination of materials and colors of the “Homage to F. A. Lange” edition. 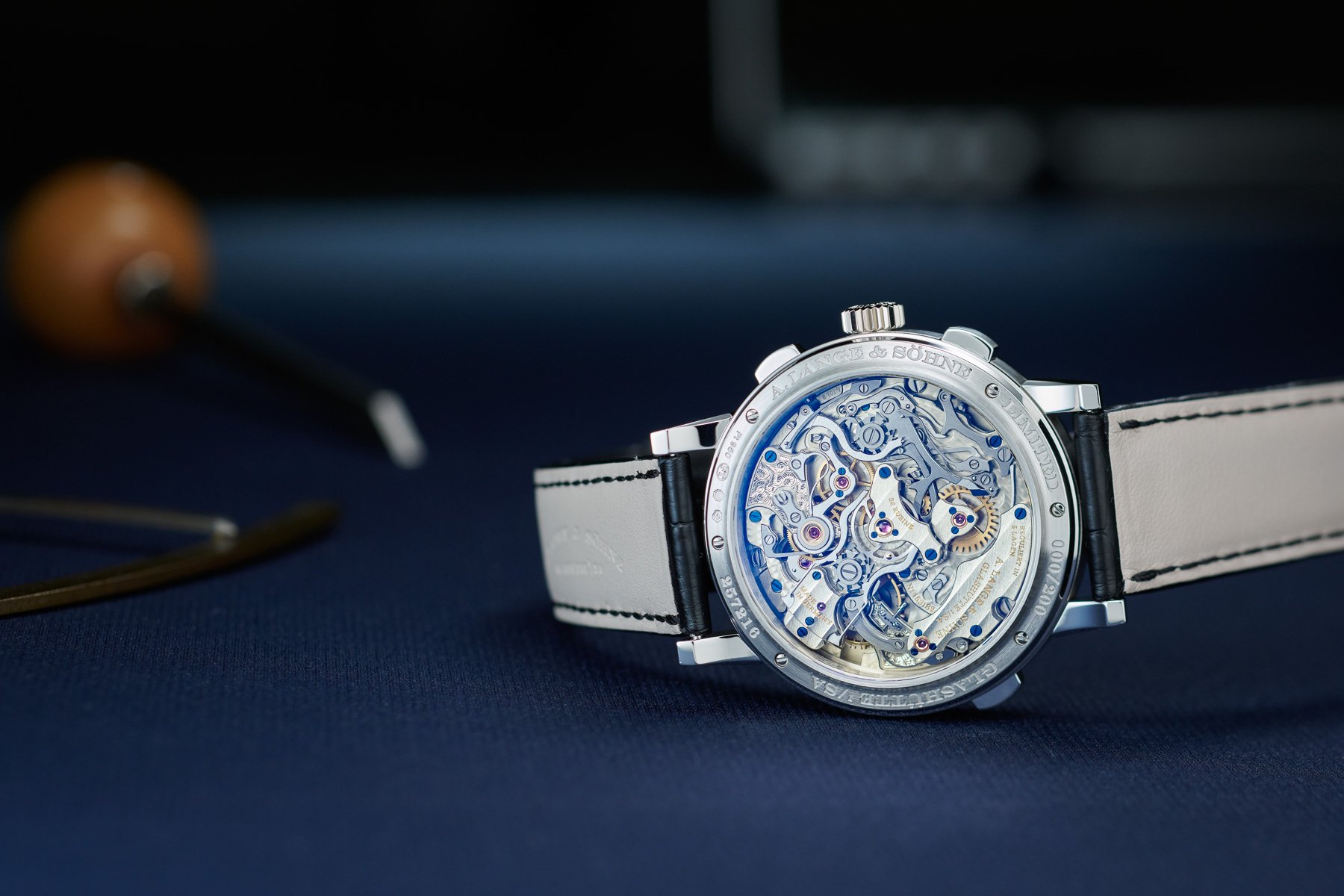 That’s also where the biggest difference is between the two watches. The new platinum 1815 Rattrapante looks more traditional. The combination of the platinum case with the silver dial and the dark blued hands creates a classic chronograph. But there is nothing wrong with that in the slightest. The thing I love about it is how crisp it looks. Despite its classy, more traditional looks, there is something very fresh about the presence of the watch. This is something we have come to expect from A. Lange & Söhne but also something that never gets old. The platinum case as the canvas

Let’s go over some specs of the 1815 Rattrapante. The watch utilizes a 41.2mm platinum case that is 12.6mm thick. As I explained in the article about the Honeygold version, the case is substantial but very elegant. A big part of that comes down to the round shape in combination with the characteristic lugs. I love how A. Lange & Söhne always creates lugs that do not necessarily stand out as a separate element, but which are elemental in the overall presence of the brand’s watches. The side of the case is characterized by its three-layer construction. The top and bottom display a polished finish, while the center part of the case band features a brushed finish. 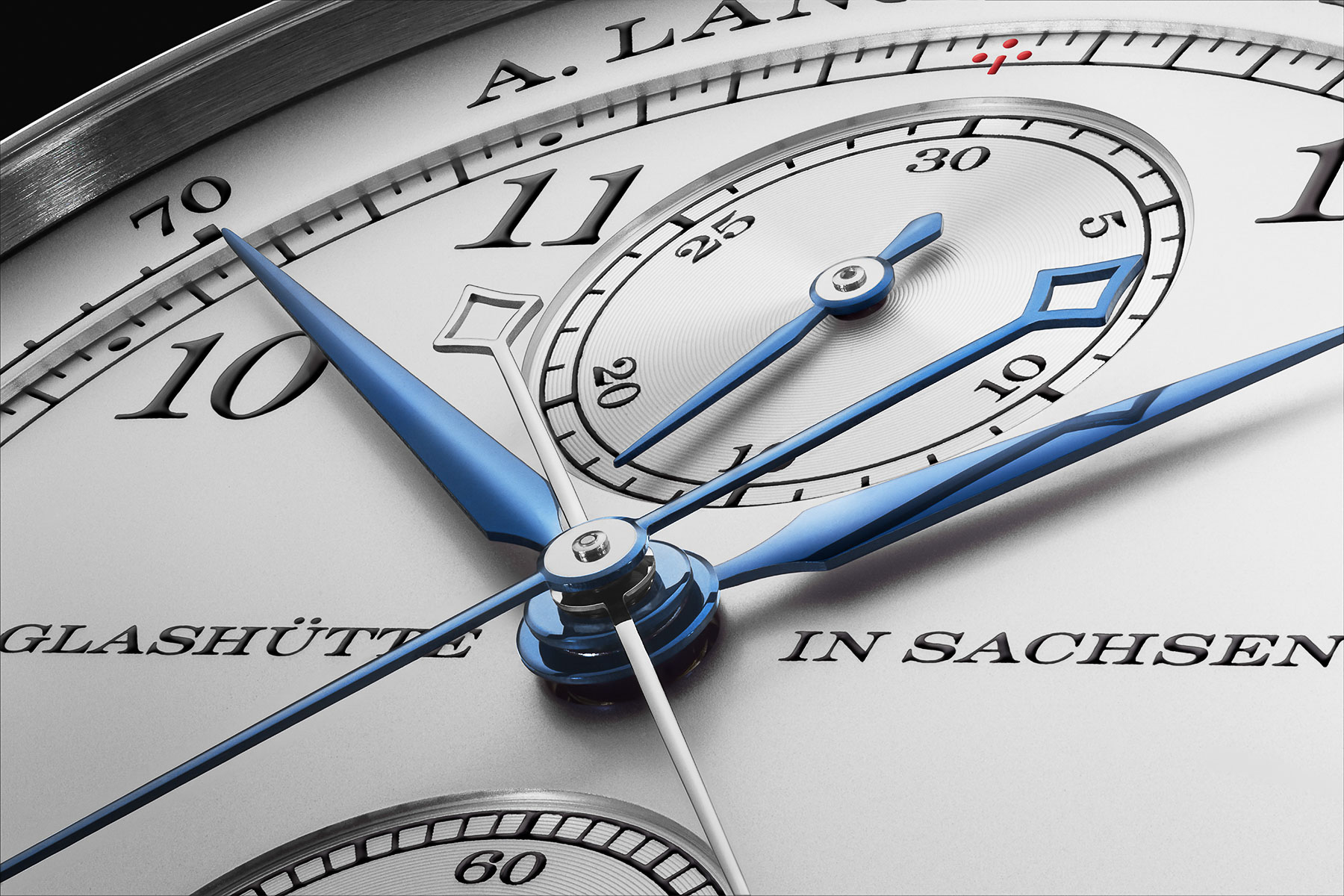 The watch houses a dial made from solid silver that is finished in what the brand calls an argenté color, essentially making it a silver-colored silver dial. All the different elements on the dial are executed in black for a classic look characterized by its great contrast and readability. The execution of the dial is spectacular, as we have come to expect from A. Lange & Söhne. Outside the Arabic-numeral indices is a black minute/seconds track and the tachymeter scale on an elevated ring. The small seconds counter and the 30-minute totalizer for the chronograph are placed at 6 o’clock and 12 o’clock respectively. 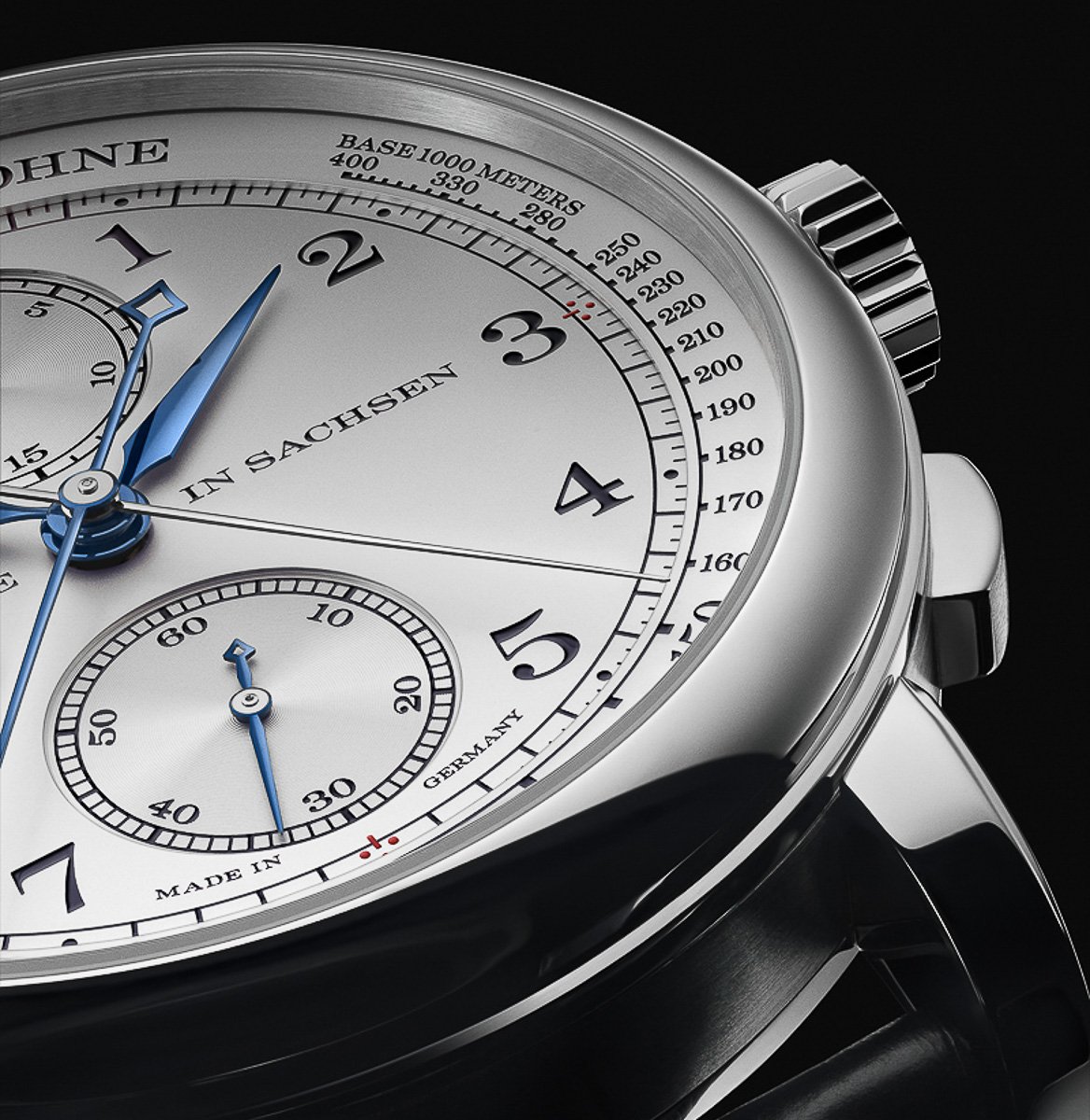 A simple dial full of intricacies

It creates the vertical layout that I talked about a lot in the article about my grail version of this watch. I wasn’t sure whether I would like it because I generally prefer my chronographs to have a horizontal layout. This gives the brand name room to breathe in the upper part of the dial, and it just feels more naturally balanced to me. But A. Lange & Söhne tackled that challenge by placing the text “Glashütte In Sachsen” horizontally on the dial. While not everyone is a fan, I love that little bit of text. Not only does it create a great visual balance, but it also serves as a testament to the fact that you are wearing a brilliant German timepiece. 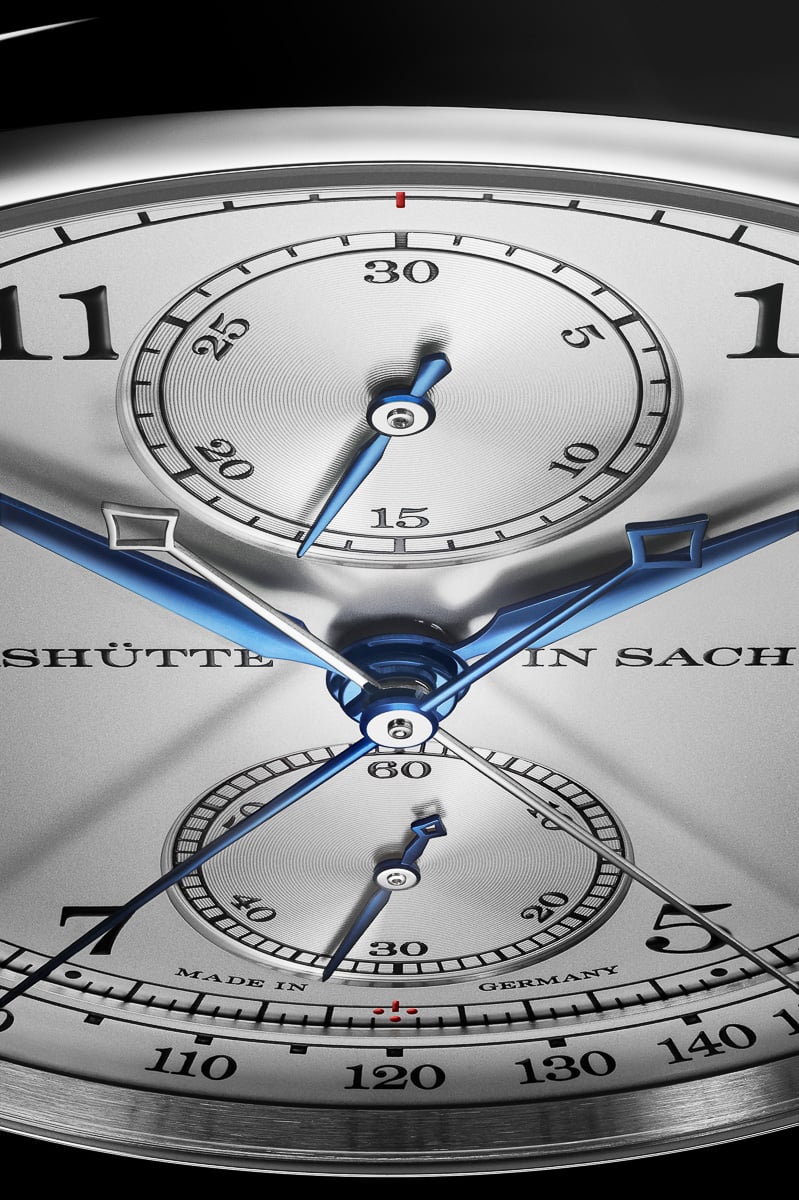 If you let your eyes move across the dial, you will see that there are little red markings used for every quarter. On the Honeygold version of the 1815 Rattrapante, they are a detail that hardly stands out. Only if you look really closely do they reveal themselves. Against the silver dial of this version, however, they stand out more. I love how they provide a little bit of extra color to the overall classic design of the dial. 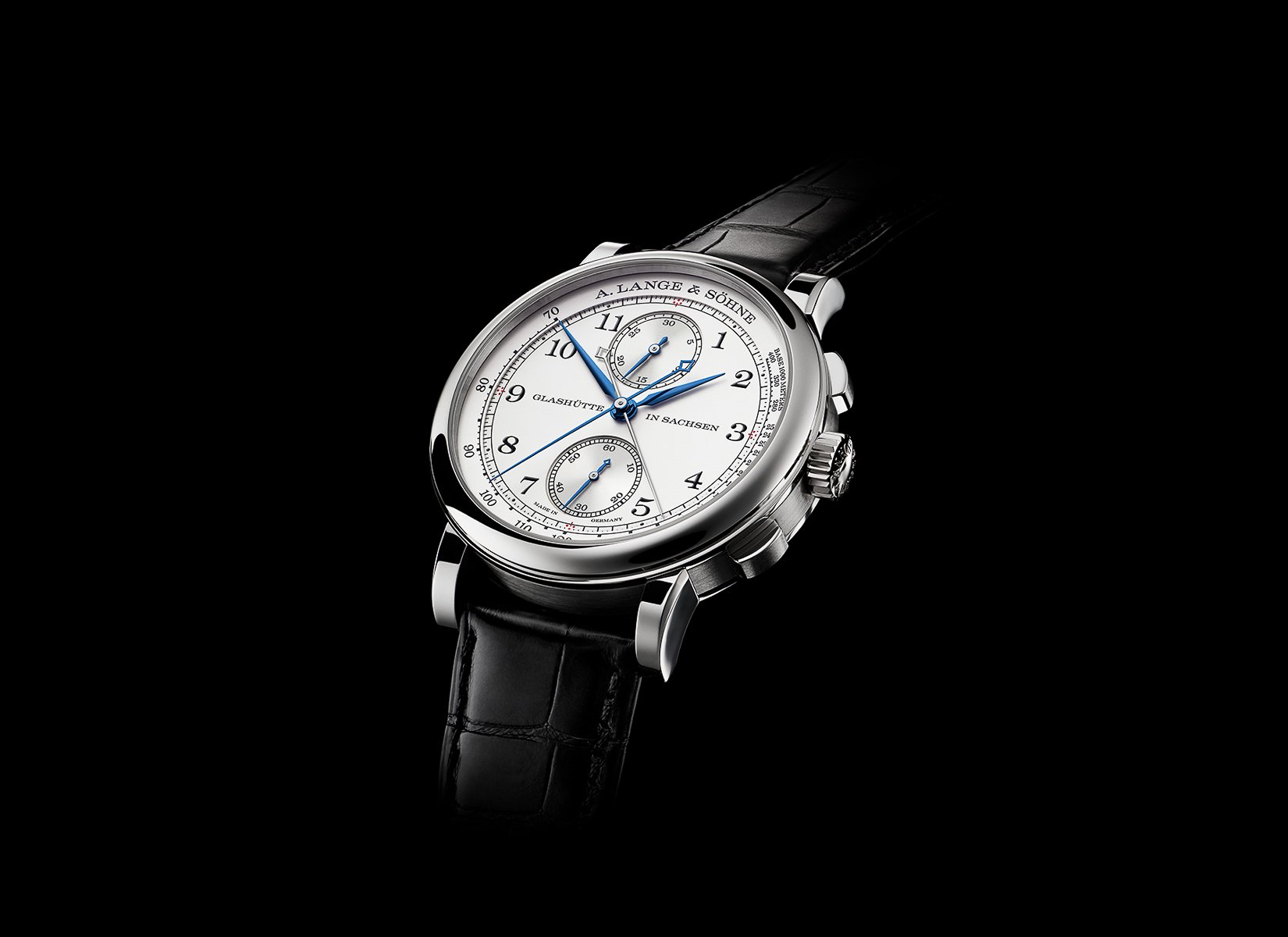 The symphony of hands

As mentioned, the hands are blued and contrast perfectly with both the black and silver colors used for the dial. Lange uses these blue hands for the central hours and minutes and the central rattrapante hand. The central chronograph hand is executed in rhodium-plated steel to set it apart from the rattrapante hand when using the split-second chronograph mechanism. The small seconds and the 30-minute totalizer hands are also executed in the beautiful blue color that is used for the other hands. As I explained in the article about the “Homage to F. A. Lange”, the vertical layout lets you play with the two central chronograph hands to create a visual symphony of the brilliant handset. 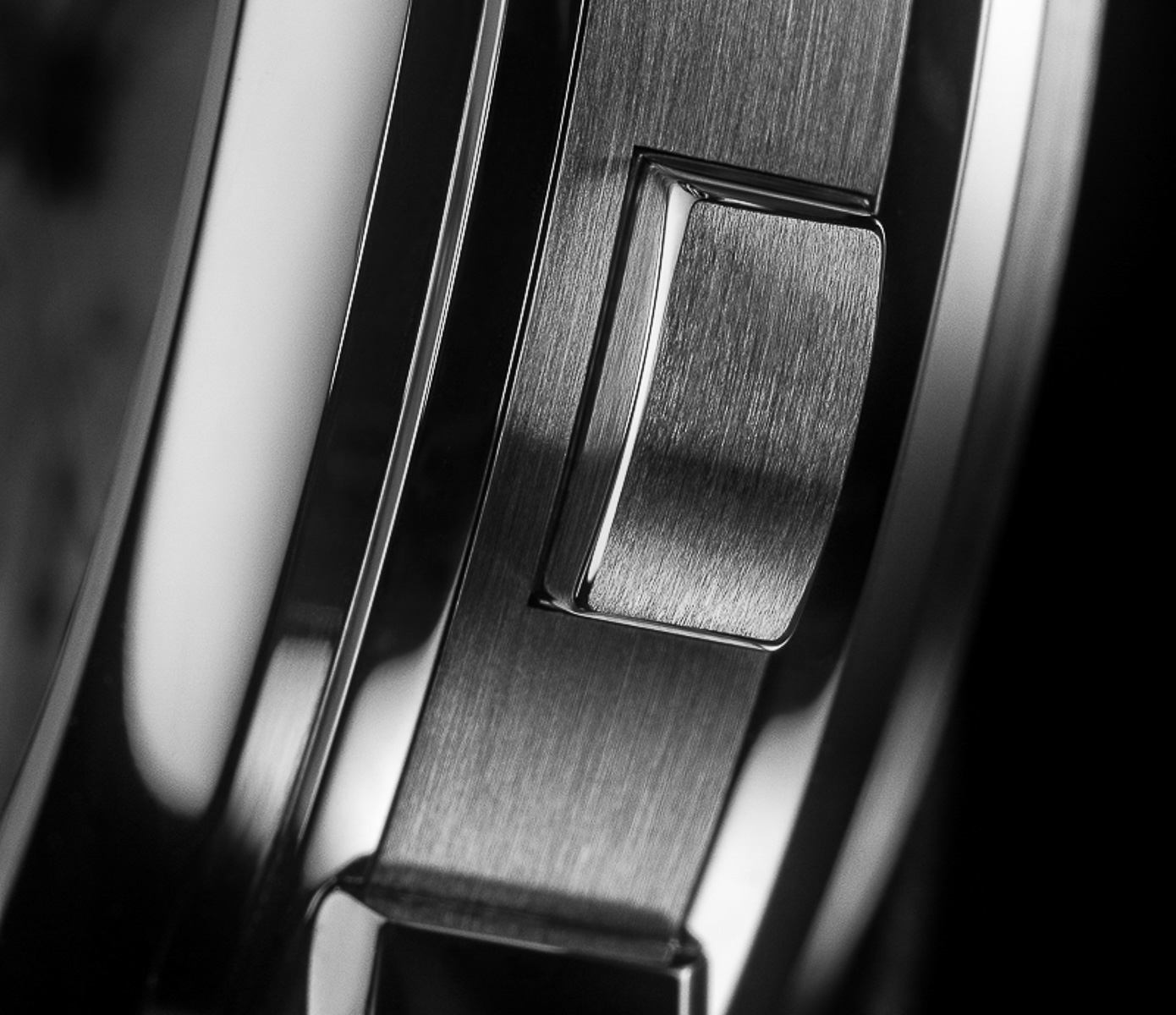 The way to do that is by operating the three pushers on the side of the watch. The two beautifully brushed pushers on the right side of the case control the chronograph, and the one at 10 o’clock controls the rattrapante mechanism. Having experienced the Honeygold version in real life, I know how amazing the interaction with the watch is. Whether you let the chronograph run or play with it to set the hands in the perfect position, it never gets old even for one second. Responsible for this magic is the brilliant in-house-developed Calibre L101.2, which is visible through the sapphire case back. 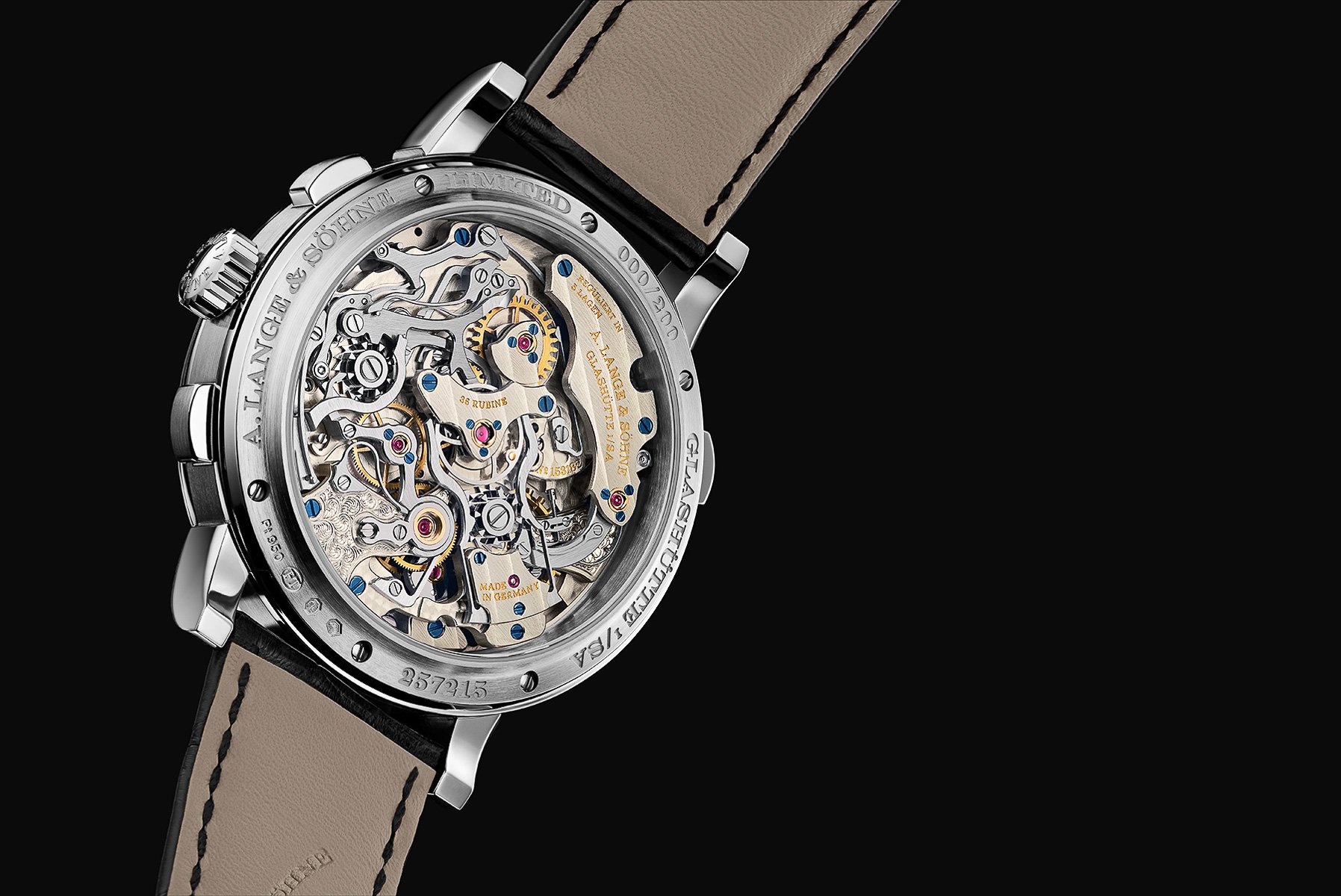 The manual-winding movement consists of 365 parts with 36 jewels, operates at 21,600vph, and has a power reserve of 58 hours when fully wound. The rattrapante chronograph movement is constructed from three different layers. Centered on the top level and on full display, you will see the rattrapante mechanism with its column wheel, a central wheel, and the characteristic clamps to stop the motion of the rattrapante hand. 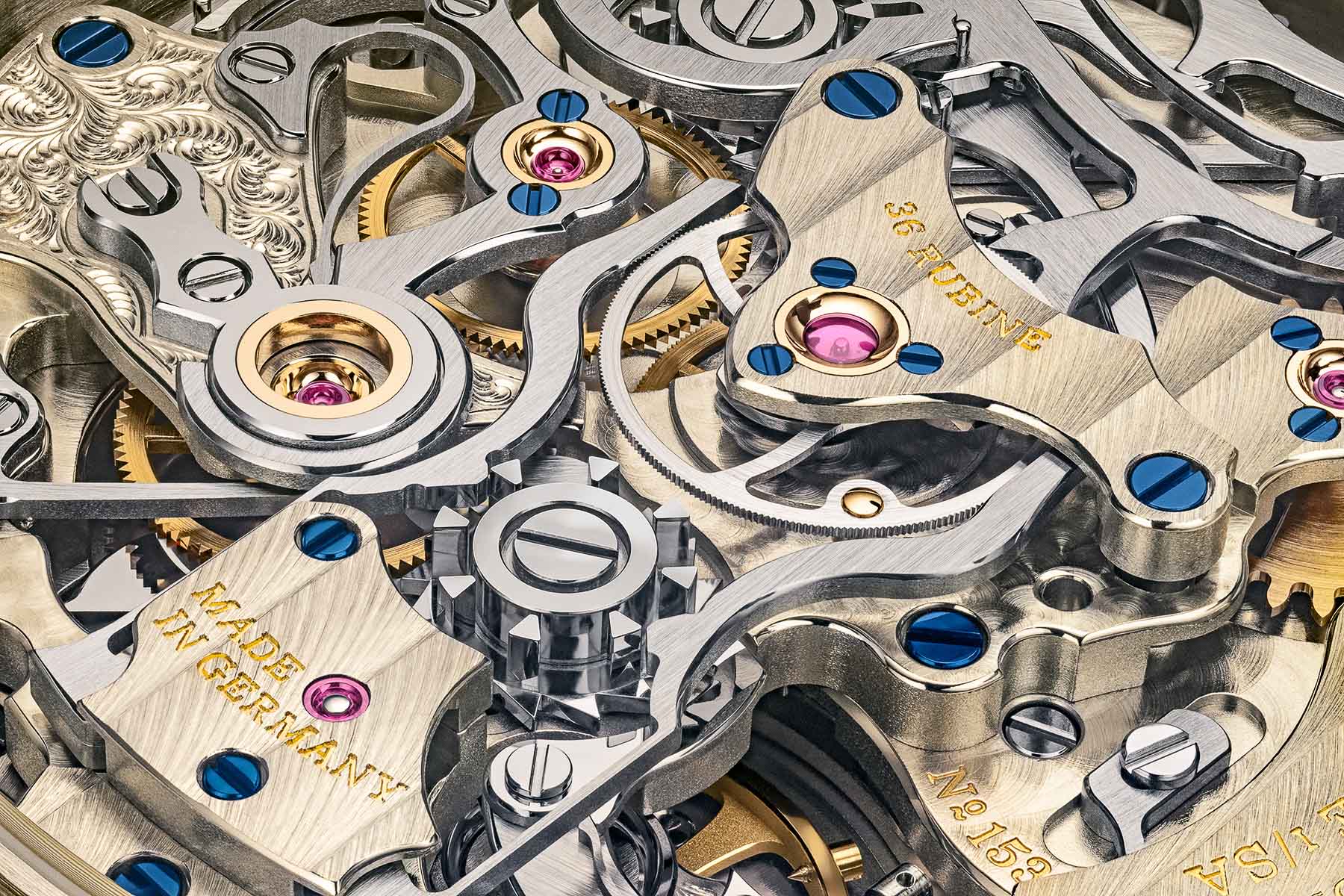 The middle layer of the movement is in charge of the chronograph mechanism. The main column wheel is visible near the crown, and the mechanism is composed of multiple curved levers, springs, and wheels. All the way at the bottom, you will find the layer of the movement responsible for timekeeping, energy storage, and transmission. It features the regulating organ, the gear train, and the barrel. Overall, it’s an absolute joy to look at the movement, especially its immaculate finishing.

A different but equally stunning finish

The finishing is also what makes this version of the movement different from the one that is used for the Honeygold “Homage to F. A. Lange”. The “Homage to Ferdinand Adolf Lange” collection was released in 2020 to celebrate the 175th anniversary of the brand. All three 1815 models in the collection feature special decoration on the movements. Reminiscent of F. A. Lange’s historic category 1A pocket watches, they show a granulated finish of the four bridges with black rhodium inscriptions. 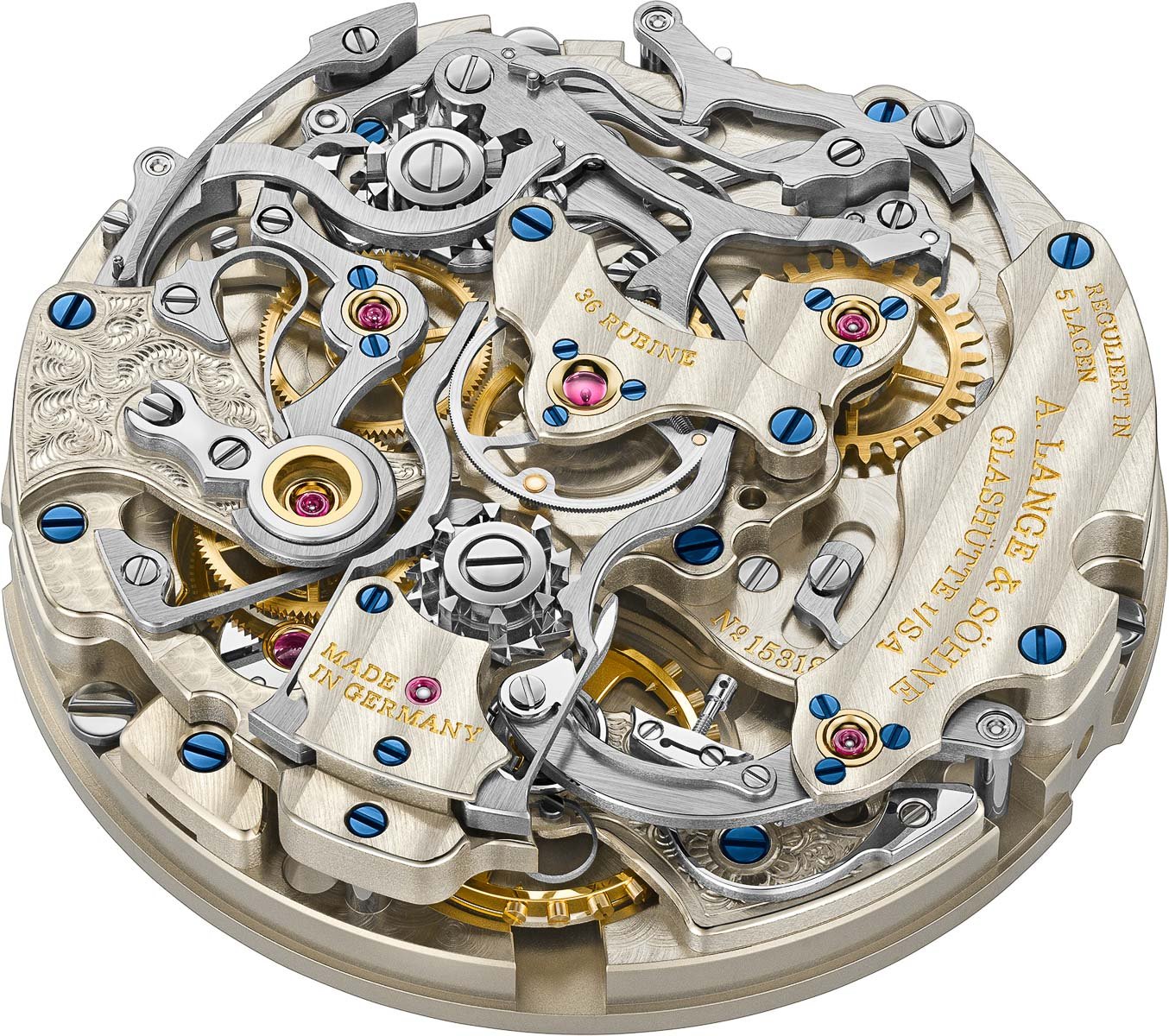 For this version of the movement, the brand uses plates made of untreated German silver. The balance cock and chronograph bridge are engraved by hand. The finishing includes a mix of Glashütte stripes and perlage, straight graining on the levers, springs, and jumpers, and high-polishing on the chamfers. As always, the end result is simply stunning in both the technique required and the visual appeal. 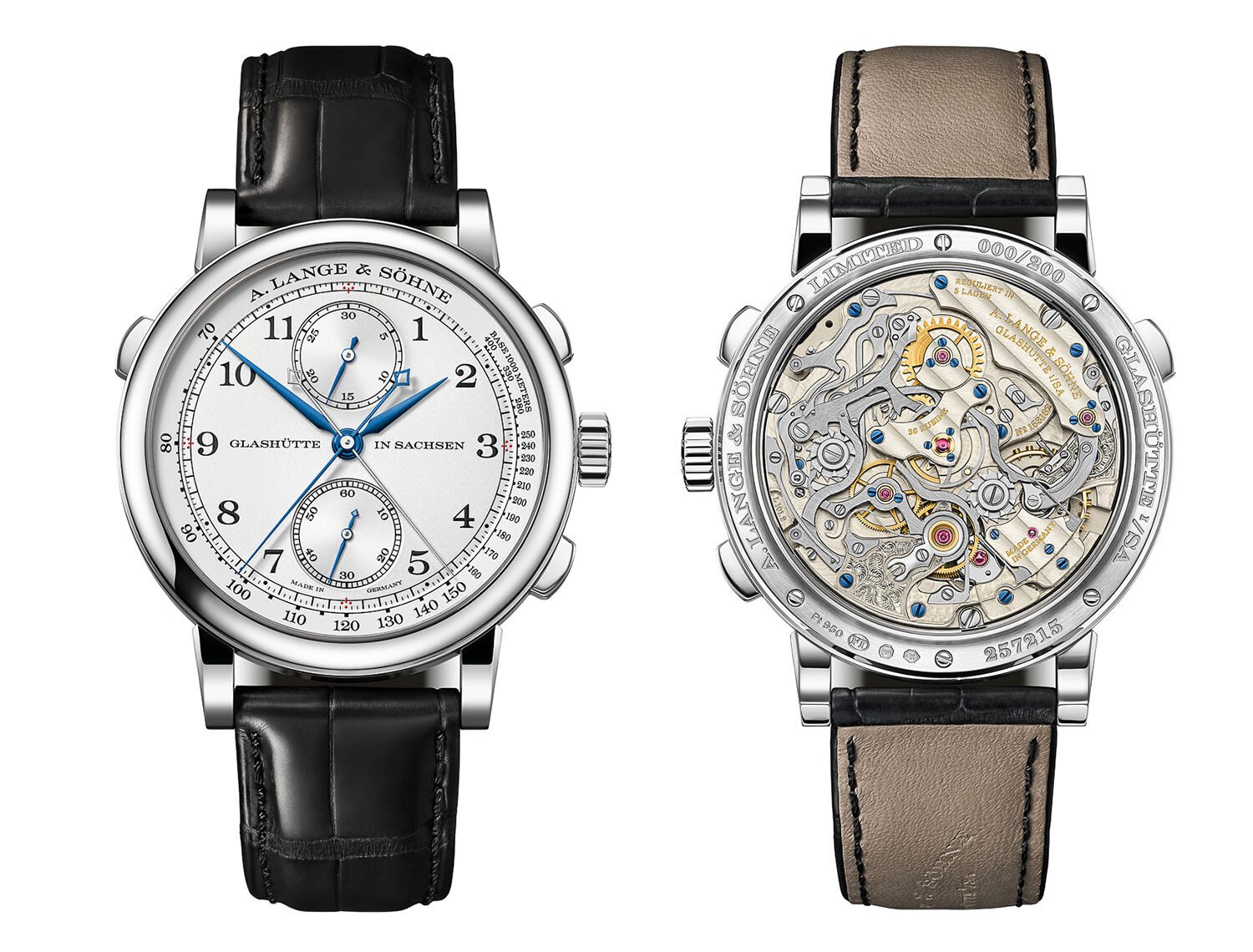 Initial impressions of the 1815 Rattrapante in platinum

The introduction of the platinum version of the 1815 Rattrapante is a logical next step. After seeing and experiencing the brilliance of the “Homage to F. A. Lange” version, it only made sense to me that the brand would introduce a “regular” version as well. As mentioned, A. Lange & Söhne will produce 200 pieces of this extraordinary timepiece. The watch will be available through the brand’s boutiques only, and it will feature a special engraving indicating the unique piece number of 200. Additionally it comes with a black alligator strap with a platinum buckle. The price is upon request for now until we have the definitive info. But I’m sure it will be close to the €130,000 price tag of the Honeygold version.

Whatever the final price turns out to be, it will make the 1815 Rattrapante a watch for the happy few. I have no doubt, however, that all 200 future owners of the watch will realize that this is not just a regular timepiece, not even a regular A. Lange & Söhne. This is a very special watch that is a joy to own and operate. I, for one, can’t wait to try it out and see how it holds up against the previous Honeygold “Homage to F. A. Lange”.

For more information, visit the official A. Lange & Söhne website. Let us know in the comments section which of the two versions of the 1815 Rattrapante you prefer.