I find myself by the sea, on the Italian island of Sardinia, together with Anonimo. Why? Because the Italian race of the WRC (World Rally Championship) takes place in the beautiful Mediterranean island of Sardinia. For the first time the Italian born, Swiss made brand is amongst the main sponsors of the tournament. To mark this great collaboration Anonimo released a special watch; the Anonimo Militare Chrono WRC Special Edition. We were among the invited few who could have a first-hand experience with the watch, on Sardinia during the WRC. After a terrible day of delayed flights and having spent the night at the amazingly unfriendly Düsseldorf airport terminal I finally made my way to the island which was already in WRC mood. 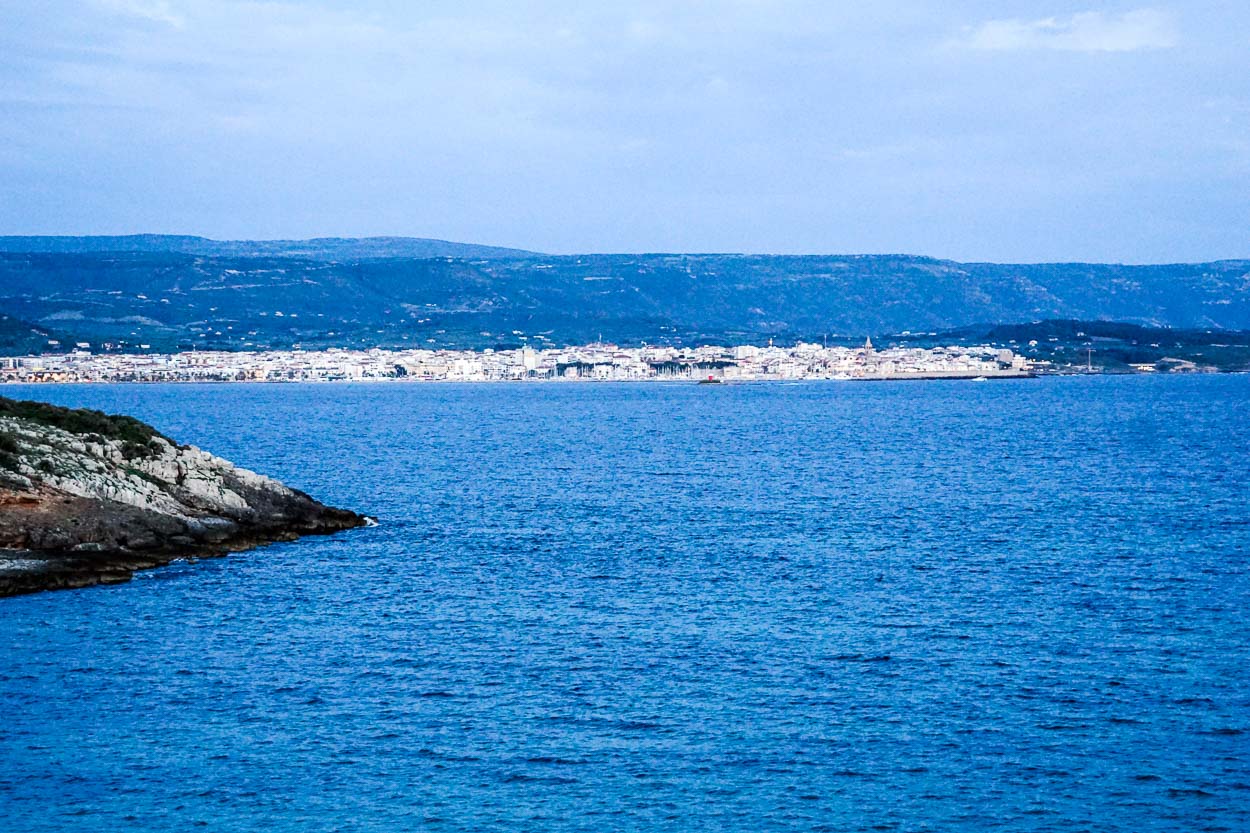 We were with a small but fun group of journalists from all over Europe accompanied by Julien and Bénédicte from Anonimo who made sure that we had the best time during our stay. Sadly, due to my late flight, I missed the co-driving in a rally car, but still, plenty of fun awaited us. We took a stroll in the paddock, checked out the teams and cars from Ford to Hyundai, Citroen and more then took a few shots of the new WRC Special Edition before we headed back to our hotel. The watch is so photogenic it’s really no hard task to find a great angle to shoot it. The vertically brushed (by hand) silver dial works great with the black PVD case and neon green elements. As harsh as it may sound the combination is not loud at all. You be the judge: 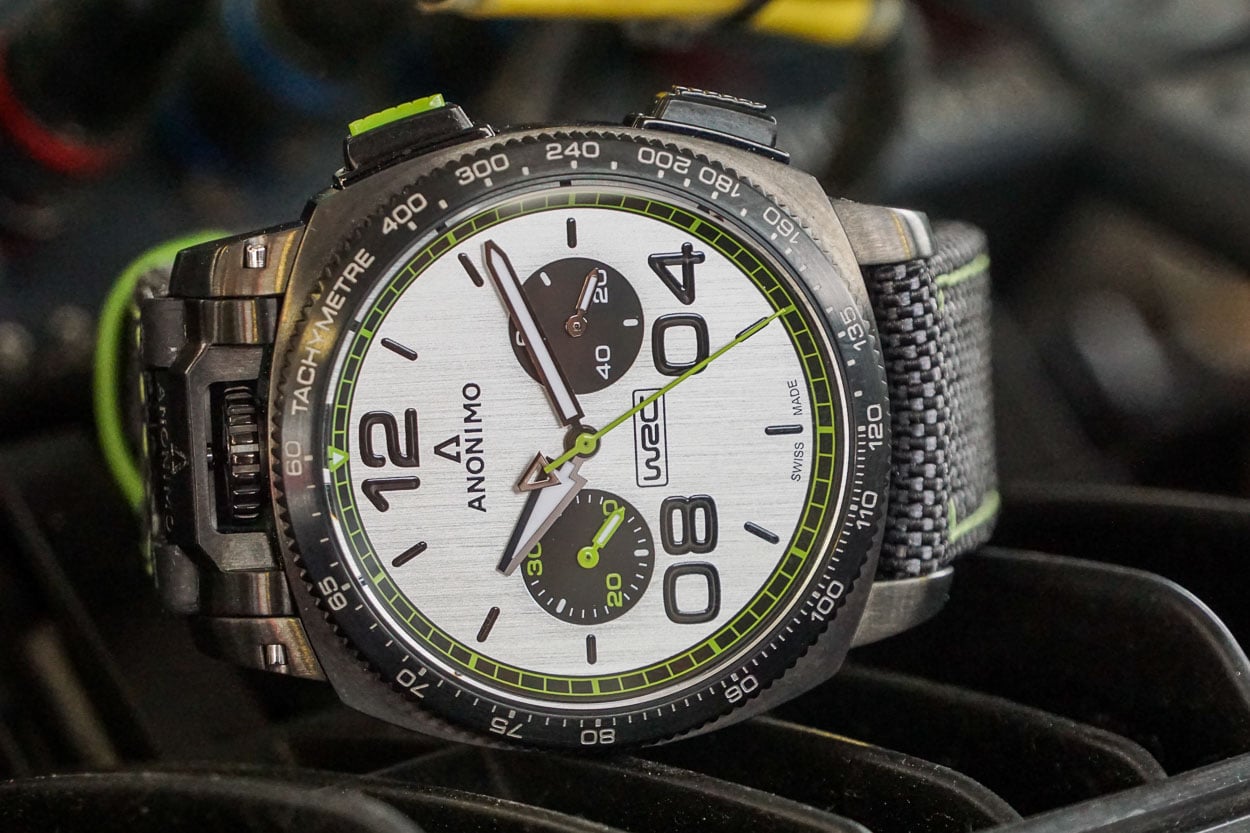 After a quick lunch, we gathered at the terrace to the official presentation of the Anonimo Militare Chrono WRC Special Edition. We also had the chance of taking a closer look at other models from the brand’s lineup such as the Nautilo or the Epurato. Our hotel was the perfect set up, not that Anonimo watches needed any extra help visually. The timepieces wear great and are comfortable on the wrist. I already have my eyes on the bronze Nautilo model with the dark blue dial for a future review. At first glance, they all look very similar, as far as the watches’ shapes are concerned. This is, on the one hand, the trademark of Anonimo, on the other hand not exactly the case. 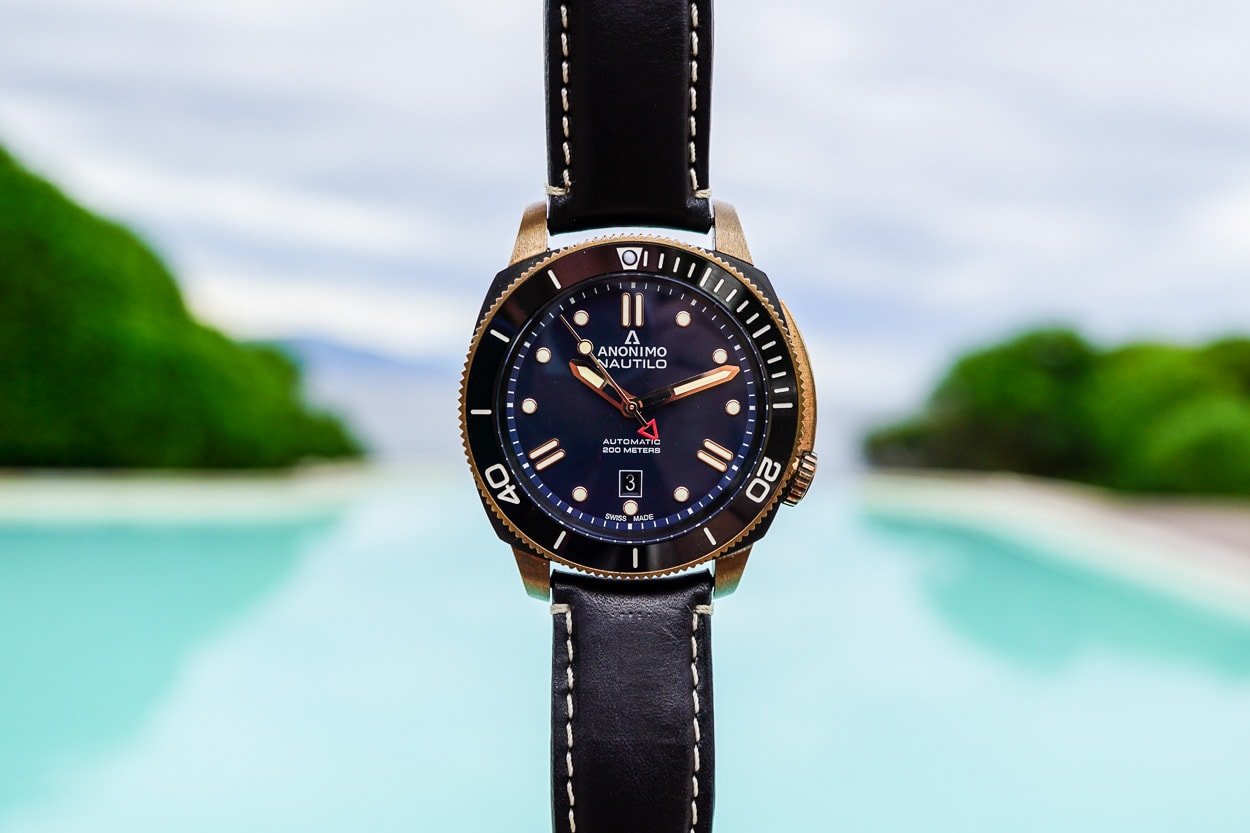 The Epurato is slim and elegant with clean dials and beautiful leather straps. It is the dressiest version of them all. Surely larger than an average dress watch the Epurato is Anonimo’s “entry” level timepiece. The Nautilo is the bigger and thicker alternative in the brand’s line up (About a year ago, Bert Buijsrogge reported about the – then – latest release from Anonimo; the Nautilo Nato Collection.). It is a true diver’s watch with thick cases made of steel, bronze or DLC. Unidirectional ceramic diving bezels make the watches sporty and while the size is large it is still not oversized at 44mm. 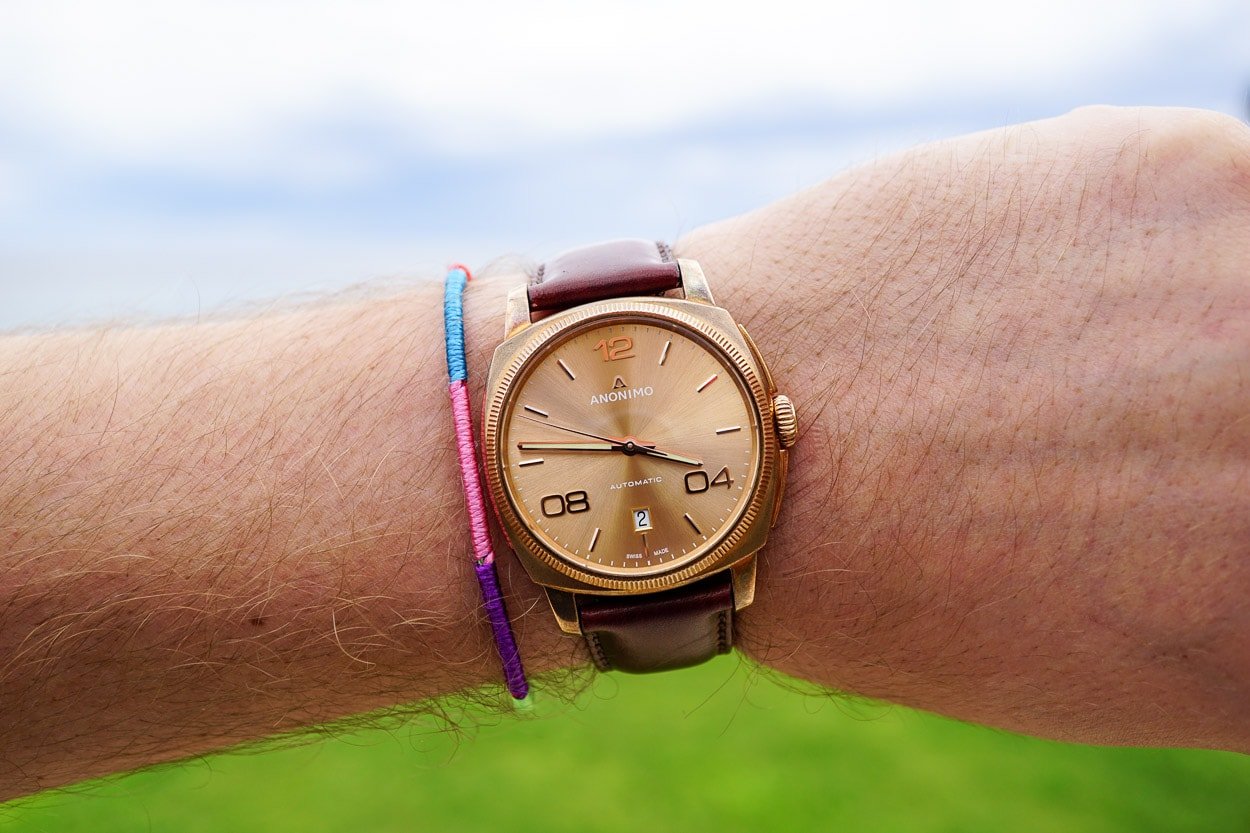 After we played with the watches, in the afternoon, we made our way to Ittiri for the first stage of the rally. The weather was just as versatile as the crowd surrounding us. We experienced heavy rain, sunshine, cold and wind but this did not stop me from taking some photos. For all of the petrol heads out there, here are some shots of the cars from the run-up. 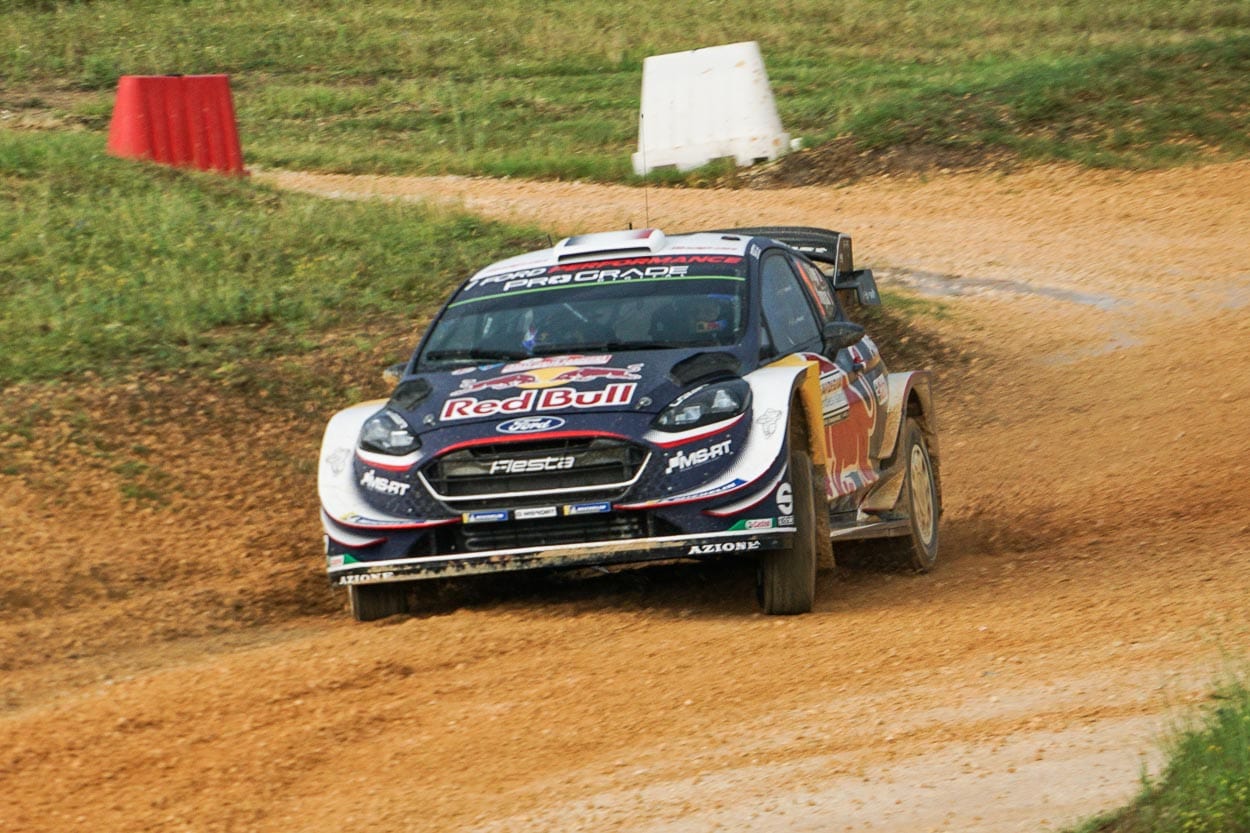 The next day was also the last one of our short but sweet trip. But not before we witnessed the cars in real action during the second stage of the tournament. While the stage of the previous day was more of a show element, this time we could see the drivers and the cars in real action, running against the clock down the green hills of Sardinia. It is amazing to witness these machines pass you by with a speed you barely do on the highway, much less on a gravel-covered country road deep inside the hills of the island. The weather was gracious this time with beautiful sunshine that helped to capture some of the action that was going on.

As the weather was still nice, our little team visited the paddocks one last time. Since most of the cars were still in the mountains for the race, the place was not as vivid as the days before. We spent a great afternoon in the city of Alghero and then slowly all left to get on our flights and back to reality after these few days of Italian get-away filled with the smell of petrol, great watches, and even better company. Anonimo is a very sympathetic brand, the watches, though have a distinctive design, work well with most occasions and outfits. The Militare Chrono WRC Special Edition is clearly one of the coolest looking watches in their lineup. The movement inside is a Sellita SW300 with a Dubois Dépraz 2035M chronograph module, exclusively designed for Anonimo. The watch retails at 5,250 CHF (about €4,500).