The watch everyone came to admire at their booth this year was the Baume & Mercier Clifton Baumatic Perpetual Calendar. It is a beautiful watch, easily the most photographed one in their booth at SIHH 2019.

However, let’s not forget the fact that their Clifton Baumatic collection received an extension with 5 new other models (6 all together, including the perpetual calendar). The basis of these new models is two features: the introduction of a red gold case and a gradated blue dial. So far, the Baume & Mercier Clifton Baumatic models only came in a steel or two-tone case. The dial options were white or black. With the new releases from Baume & Mercier in 2019, this is about to change for the better. 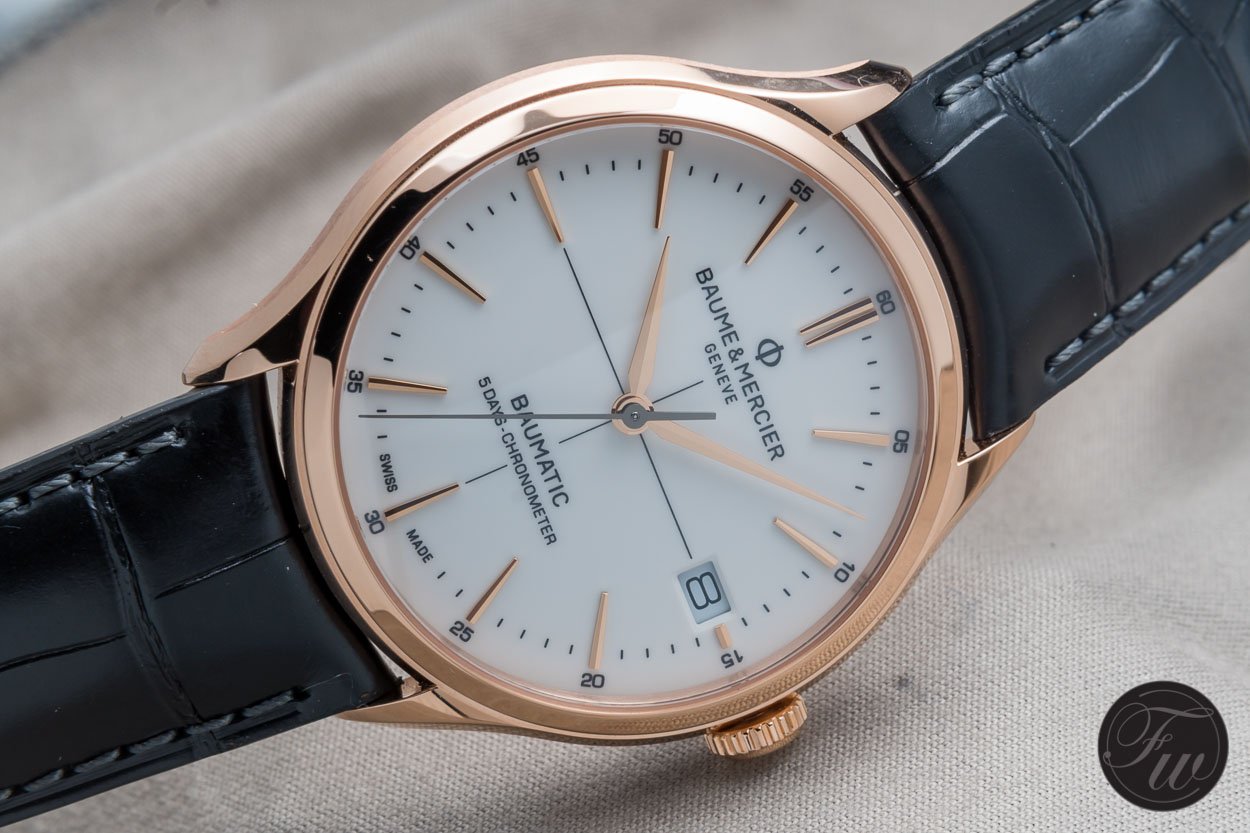 Baume & Mercier’s Clifton Baumatic watches are a bit of a mixture in terms of their looks. They are not as elegant as the Classima models but you also not sporty like the Clifton Club pieces. Don’t get me wrong I’m not saying that they’re not cool watches because they are. Clifton Baumatic watches are somewhere in the sporty and elegant range of Baume & Mercier’s offerings. But this collection was a bit limited until now. This is due to the fact that most of their timepieces have white dials (except for one model). Regarding the case, the only material you could get a watch was either steel or gold & steel (as included in our article about bi-colour watches). Well, the first thing they did, was to add a gold case to their collection. For the 2019 collection, it only comes with the white dial version though. 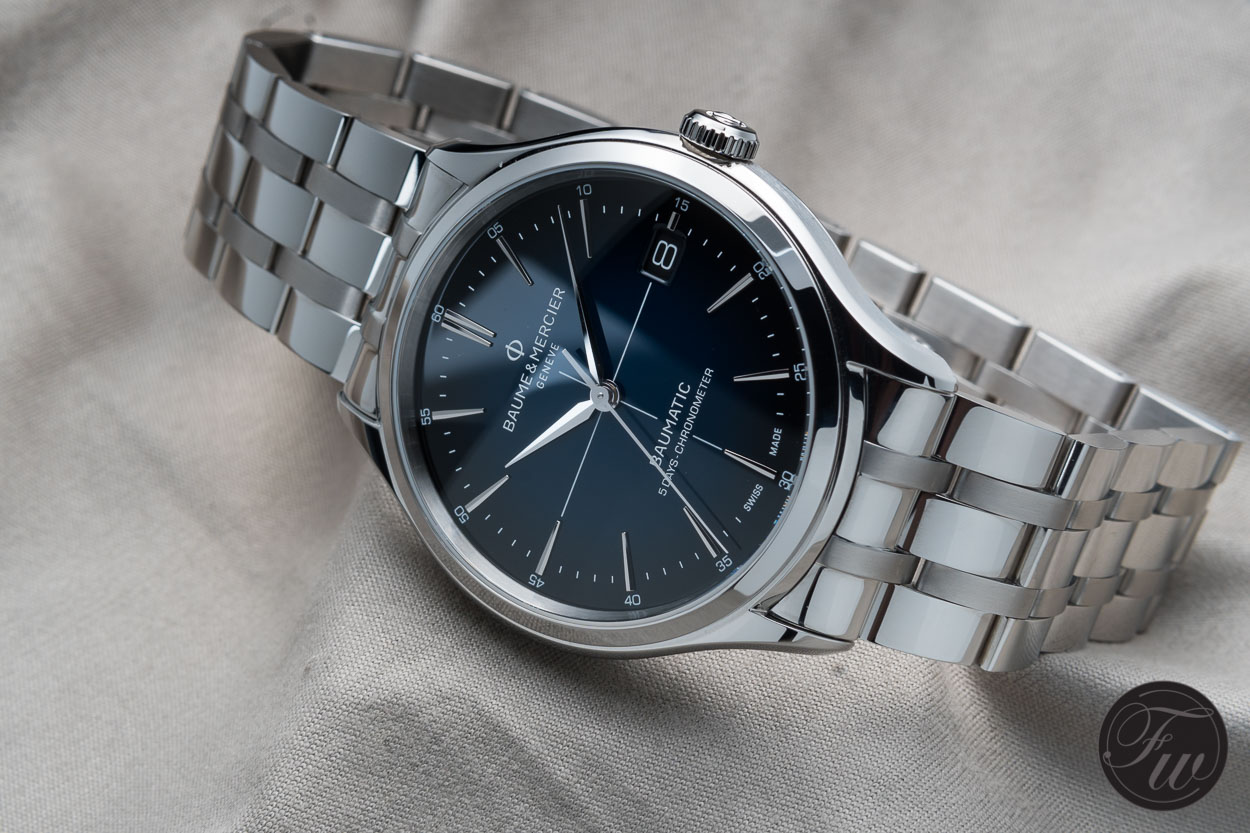 Speaking of dials, Baume & Mercier’s 4 novelties – out of 6 – had graduated blue dials. It’ really only 2 watches, in 2 versions. Let me explain. So, for the first time, the Clifton Baumatic collection received an expansion with 4 blue dial models. You have the Clifton Baumatic with chronometer certification (COSC), on a steel or leather strap. Then you have the standard Baume & Mercier Clifton Baumatic with no chronometer certified movement. This one also comes with a steel bracelet or leather strap. That’s 4, but really only 2 models. None of these Baumatic movements are new, the brand already had them in this very collection. The older models also come in steel cases with a crosshair on the dial on the chronometer models. The non-chronometer models have plain white, blue or black dials, no crosshair. All watches are 40mm (but the gold), with domed sapphire crystal and water resistance up to 50 meters. 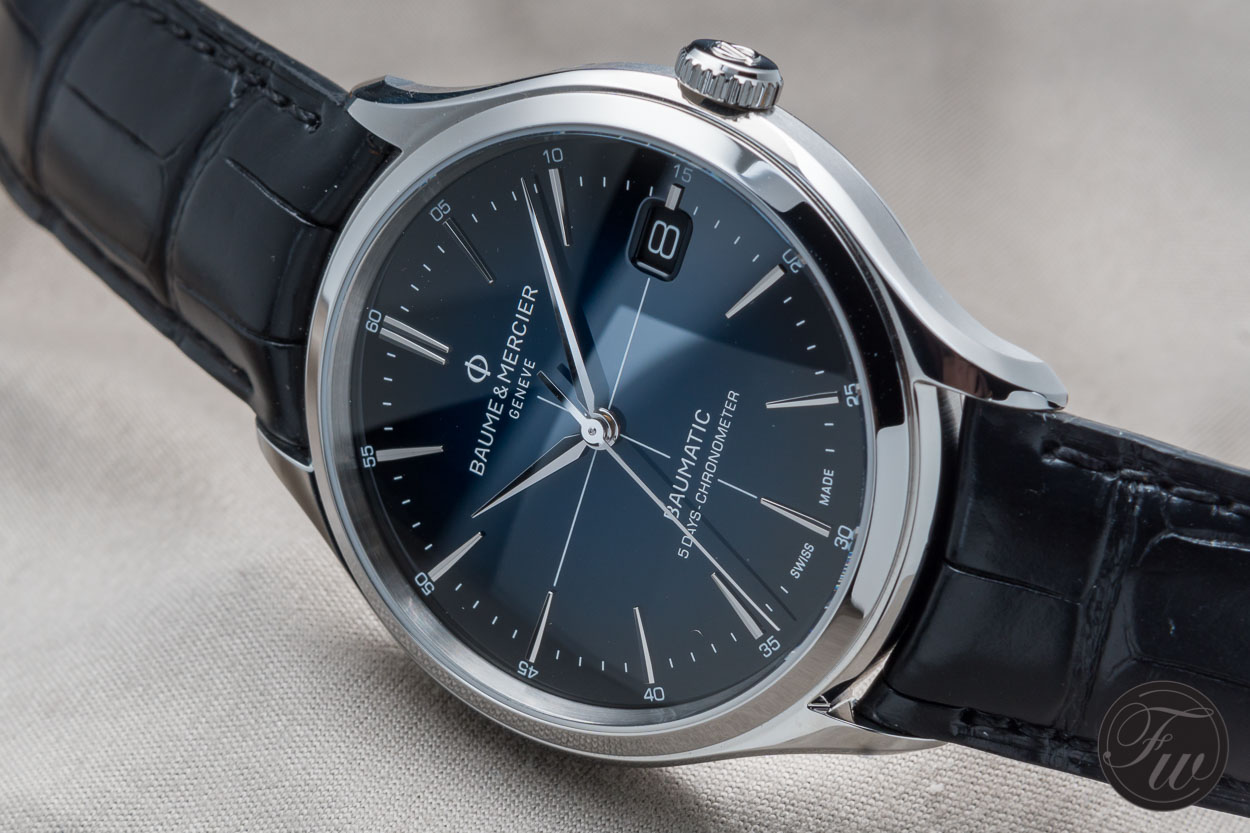 To sum it up, we have new Clifton Baumatic models with a blue dial. The older versions had white or black dials. All of them had steel cases, but one. That was not a 2019 novelty that came in a bi-colour case and non-chronometer movement. The other novelty that Baume & Mercier introduced is an all gold case. That Clifton Baumatic indeed comes with a chronometer movement inside and with a white crosshair dial. The case is 18-carat red gold, just like the Baume & Mercier Clifton Baumatic Perpetual Calendar. The gold watch has a diameter of 39mm and has satin finishing. To match the case material the hour markers on the dial as well as the hands are in red gold. The only exception is the second hand, which is anthracite. That is the same color as the crosshair on the dial. 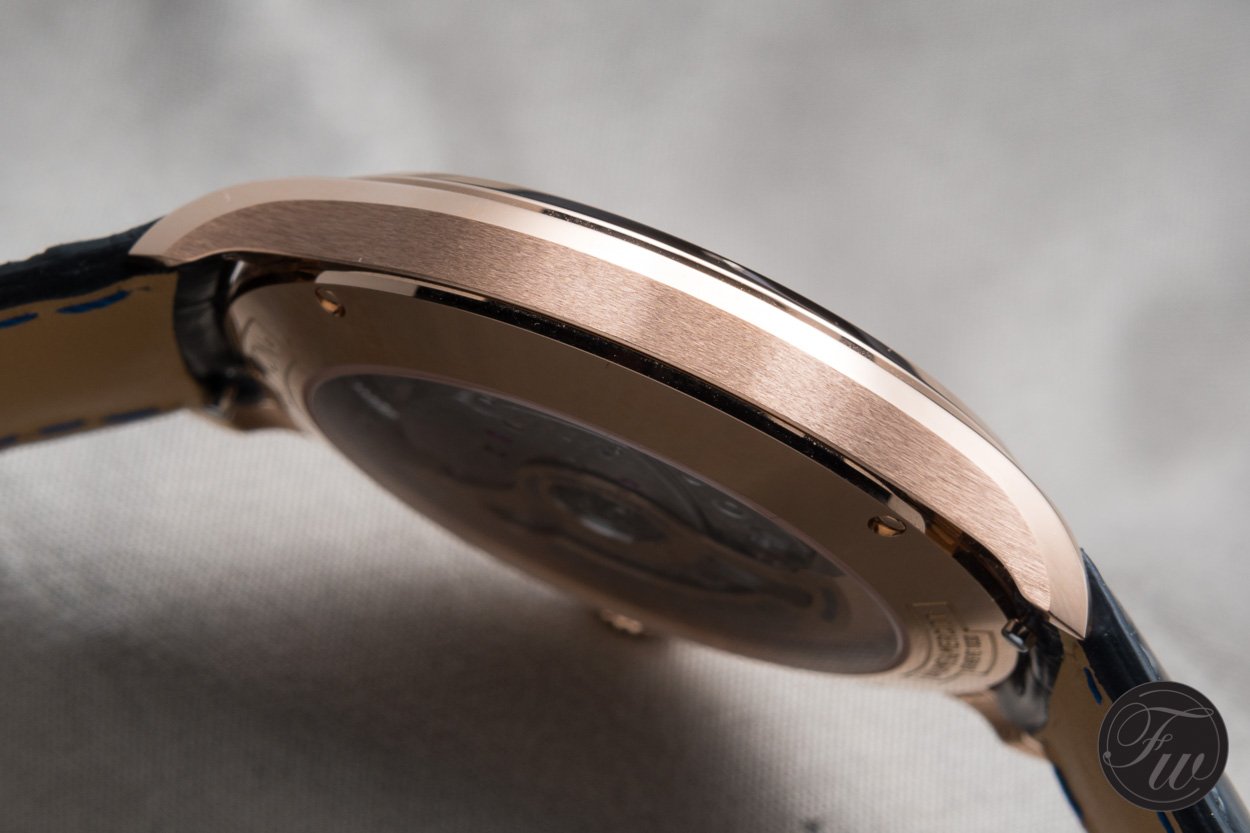 With the release of the Baumatic movement, Baume & Mercier became the first brand from Richemont to have a caliber with a silicon balance spring. While some think that have silicon in a mechanical movement cheapens the brand, it has many positive features. Amongst others, it is anti-magnetic. A feature that comes in handy these days, as we are surrounded by magnetic fields. The Baumatic self-winding caliber (inside all Clifton Baumatic models) has 120-hours of power reserve. Hence the wording on the dial; Baumatic 5 days / Chronometer (in case of the COSC models). According to the brand, the service requirement of such caliber is in every 7 years. While you should take your watch to a watchmaker when it needs to not when the time is up, the caliber definitely reduces the chance of any error. The frequency of the Baumatic is 28.800 vph and it has 21 jewels inside the movement. 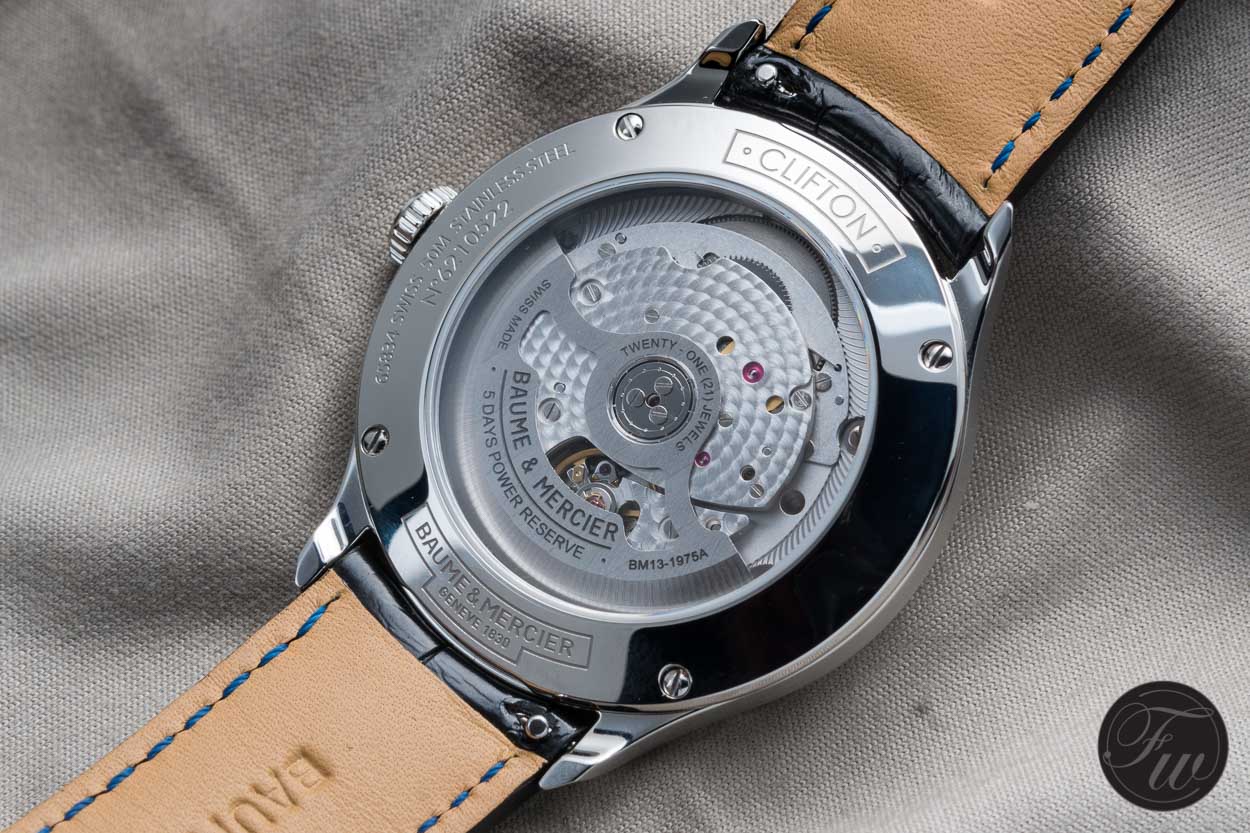 The prices of the 2019 Clifton Baumatic models will not be over €3000. As a matter of fact, the non-chronometer version will be around €2500 (depending on the strap/bracelet). While the chronometer versions will be close to €3000 but still under it. The gold case white dial chronometer Clifton Baumatic will be a bit over €6000. These prices are fair and reflect current market prices. Similar models from other groups are cheaper but none of them has the same movement, only comparable ones. If it’s important for someone to have a mechanical watch with a huge power reserve, the Baume & Mercier Clifton Baumatic is a watch to be considered. The size and looks are great and very contemporary. The Baumatic caliber is modern with a bunch of great features that come useful nowadays.