Black Badger And Arcanaut: Into The Den We Dive — Lume, Stone, And Gammel Dansk

After five days 145km north of the Arctic Circle with Fortis, you might be forgiven for thinking the first thing Dave and I would want to do was to scurry home and put our warmest socks on. However, when in the land of Abba, there are certain things one must do. One of those things, despite Dave’s advancing lurgy, is to visit James Thompson, AKA Black Badger. We were lucky enough to visit his den and catch up with the man/beast himself, as well as Anders Brandt of Arcanaut, a brand he co-owns with James himself.

For long-time fans of watchmaking, the Black Badger will need no introduction. For neophytes, however, allow me to furnish you with some background. While everything that glitters is not gold, almost everything that glows like a star just exploded in your face is thanks to James. Simply put, he is the luxury watch industry’s foremost lume guru. While it is his work with RC Tritec (the producers of the Super-LumiNova compound James takes and turns into an almost nuclear light show) for which is most famous, his growing reputation as the go-to guy for advice on funky materials is really what we should be focusing on right now.

As well as the fact that he’s Canadian, and that Instagram recently shadow-banned a post of his for making fun of Canadians. I mean, what is the world coming to…

The Badger Den (that’s where James performs his particular brand of “bro-alchemy”, let’s call it), is an absolute paradise for big kids. You know when you were younger and you used to sneak into your granddad’s tool shed, for example, and marvel at the ancient gardening equipment, paints, spirits, and possibly even “friendly” magazines? This is like that, but for grown-ups. There is wonder in every corner because there is possibility in every atom (quite literally when James is involved). 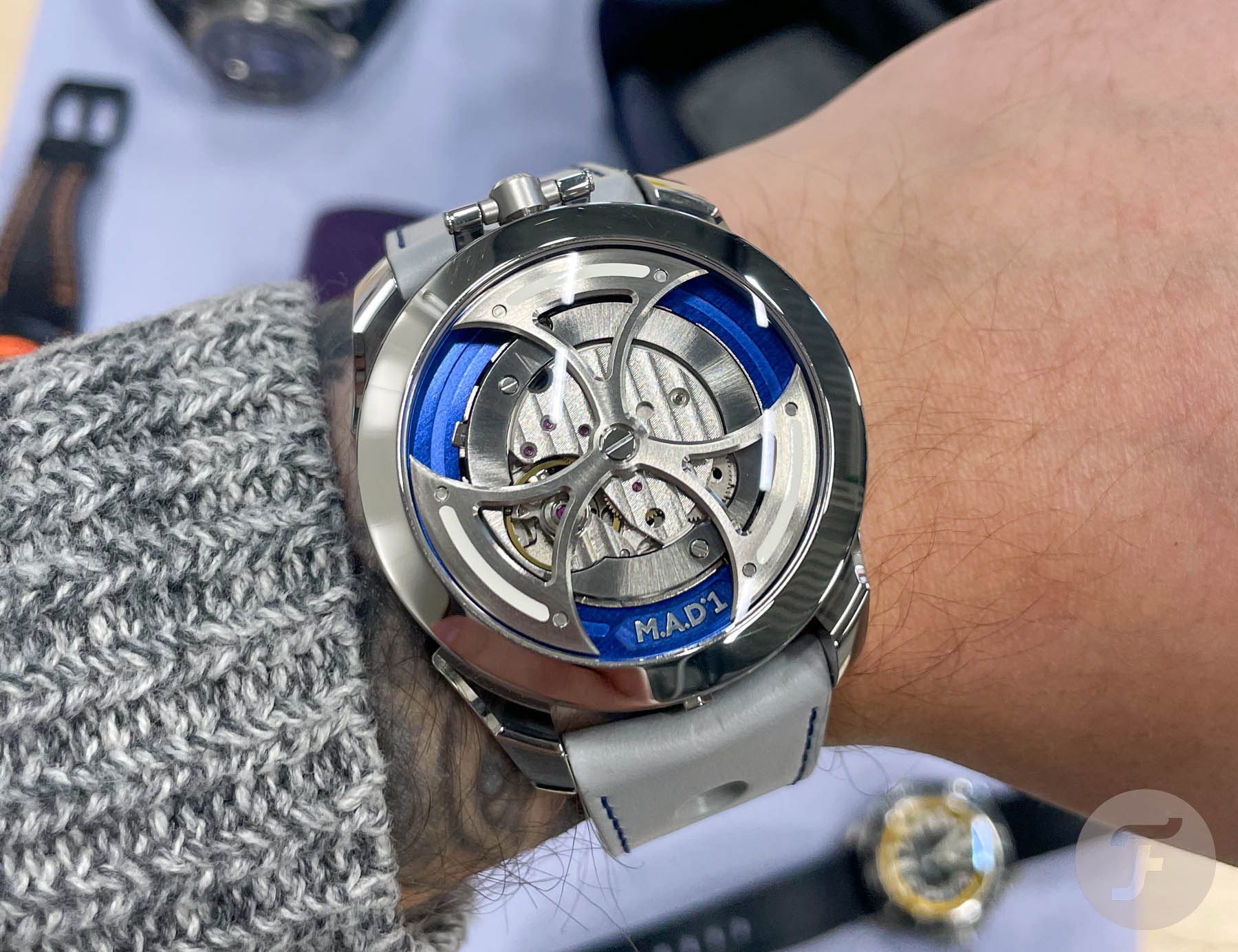 The M.A.D’1 that dominates every conversation (even the ones it’s not invited to).

The Black Badger is on a mission to redefine the concept of luxury, but not in the way you hear on a near-daily basis from start-ups and doe-eyed micros the world over. He doesn’t want to democratize luxury by making it easier for more consumers to access his products; he wants to democratize the materials that can be considered luxurious.

So this isn’t about bringing your next-door neighbor, Dave down the pub, Sally from the 7-Eleven, or penniless Pete you knew from school into the luxury fold, no. Rather, this is about taking metals like magnesium or “waste products” like Fordite and elevating them to a level of art that no one could have imagined would ever be as desirable as gold.

Industrial or salvage chic might be a slightly sanitized way to put it. James is obsessed with making something out of less than nothing. It’s not that he’s an avid up-cycler in the name of the environment; he simply gets a kick out of performing minor material-based miracles on the regular. 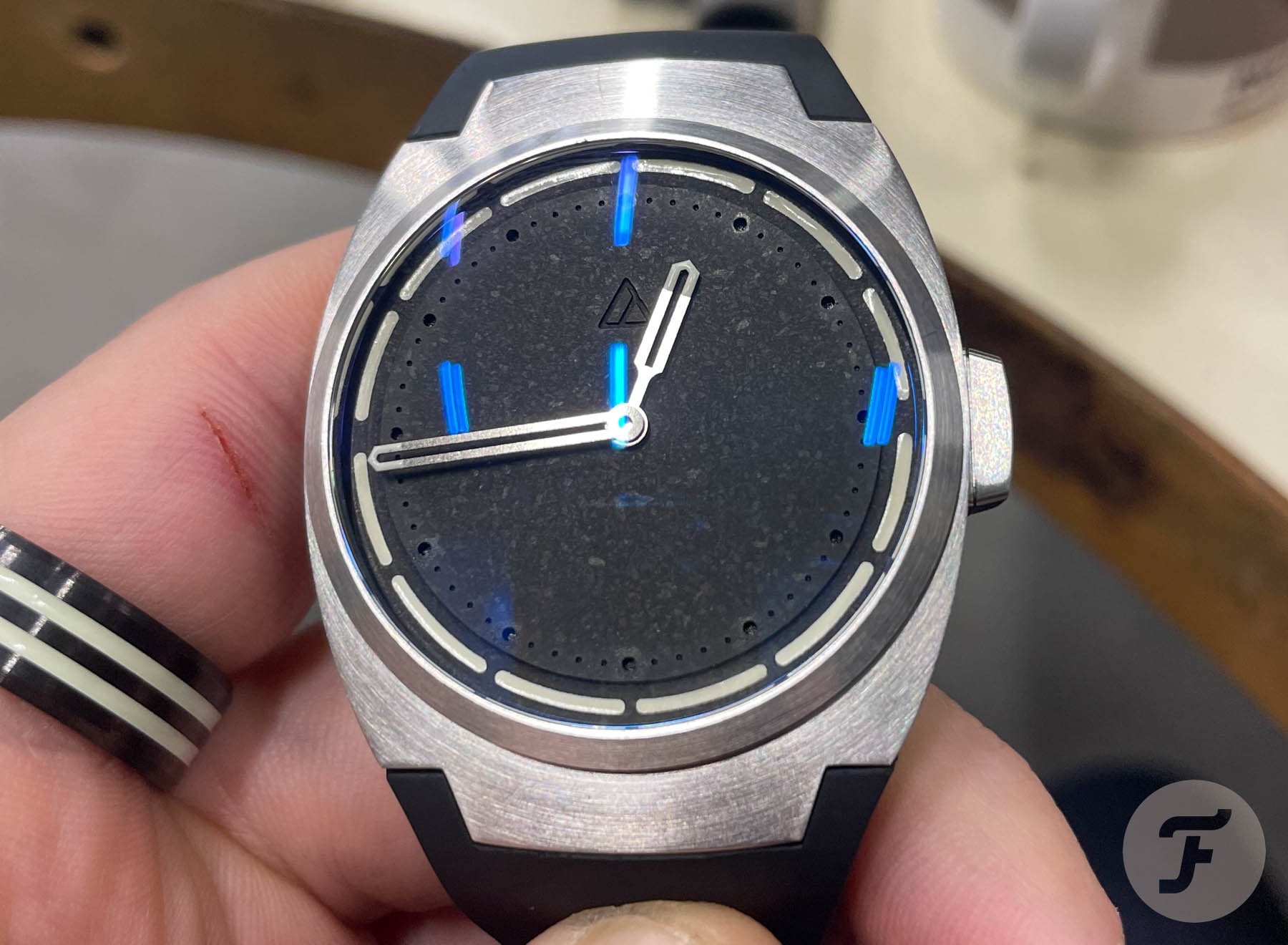 Our long-desired trip finally came about because of our proximity to his workshop in Gothenburg. However, having made the trip back down from Kiruna to Stockholm following our week north of the Arctic Circle with Fortis, Dave and I realized it might have been easier to have just flown out from our local airports (Berlin and Manchester, respectively) directly and made a short weekend of it. 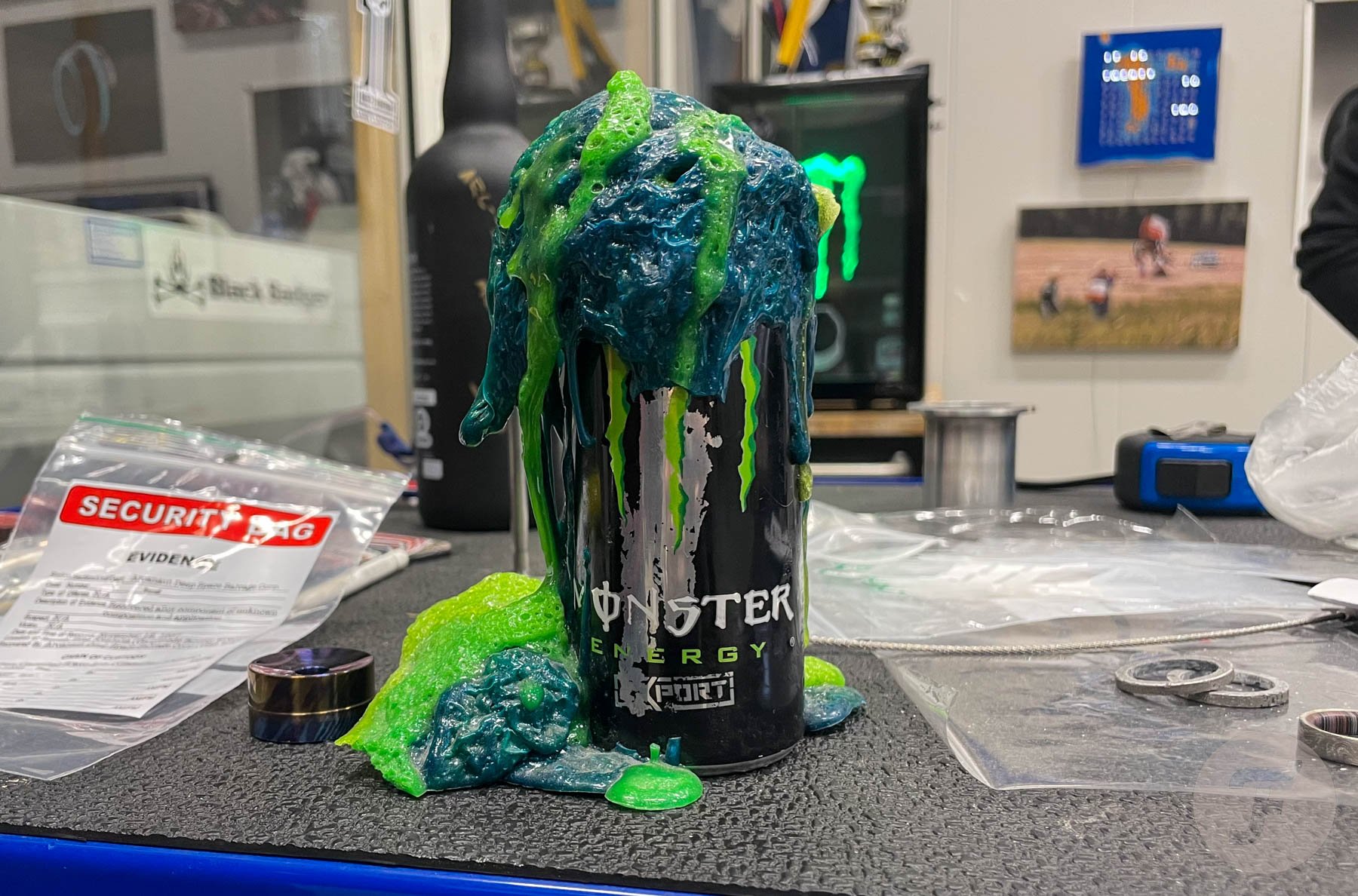 This keeps the boys alive and addles their insides in the best way.

Given the scant availability of flights from Kiruna to Stockholm, we were forced to take the evening flight that got us into Arlanda too late to transfer to Gothenburg that evening. We spent another night in Arlanda Comfort Hotel before grabbing a desperately early flight across Sweden that saw us check into our hotel for the night before 10 am. James arrived to meet us shortly after midday. We had a coffee and hopped in an Uber across town to the industrial state that plays home to the Badger’s Den.

We’d not been there an hour before the door to the den swung open, revealing Anders Brandt of Arcanaut, silhouetted by the pale sunlight. His greeting to us was something between a roar and a yell. In the absence of real words, he held aloft a bottle of Gammel Dansk. For non-Europeans, that’s basically Jägermeister (on smack). 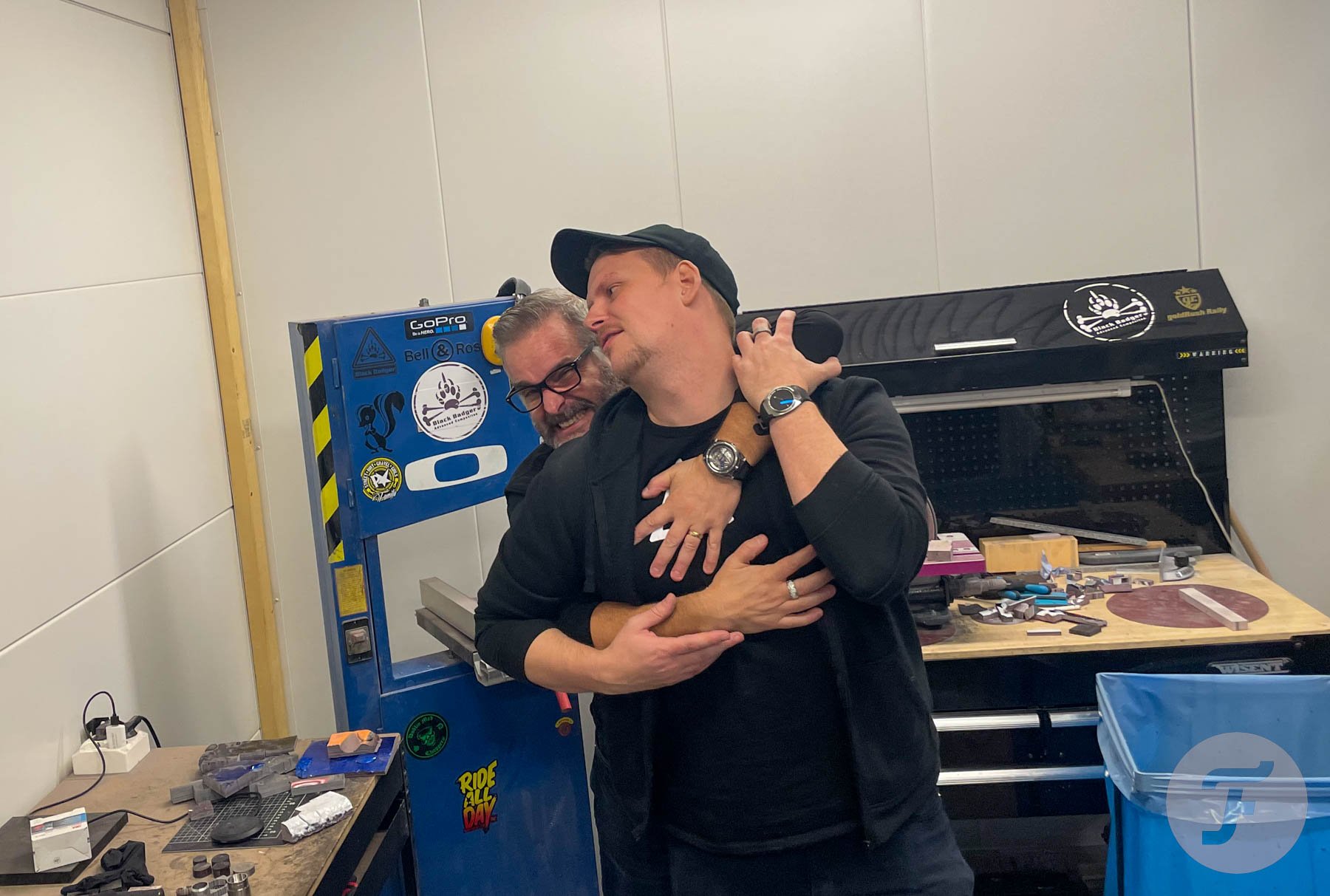 The love is real.

Obviously, given the fact it was barely 1 PM at that point, we didn’t crack it open immediately. Like the civilized souls we are, we wait until at least two o’clock. At that point, micro shots of this potent brown liquor started moving around the office, clasped in our hands, trembling with excitement at the wonders James unveiled to us every couple of minutes. 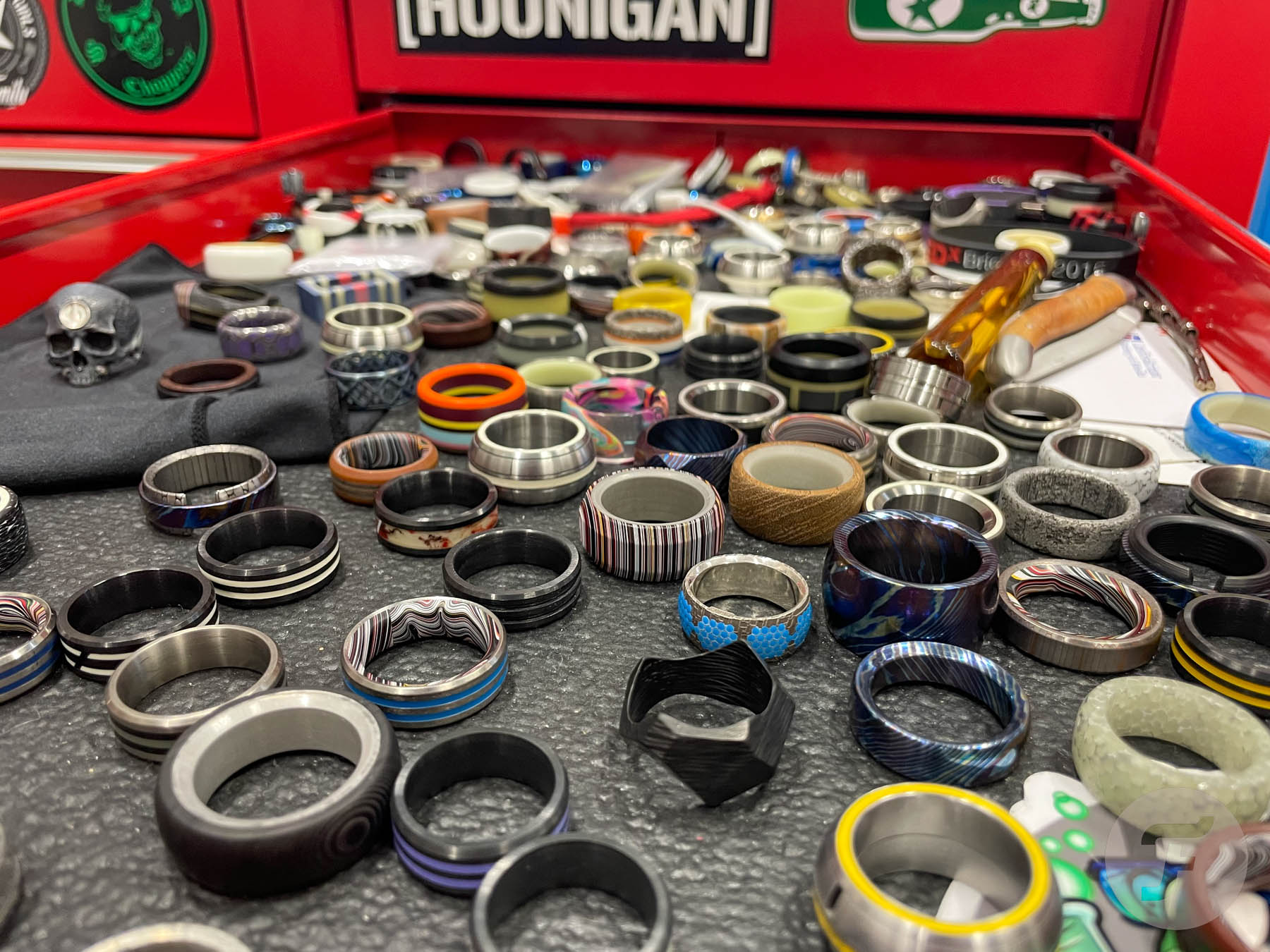 Does it get any better than this?

We saw some amazing things, some simply stunning rings. Watch cases next to faces, stacked upon materials in sheets, and watches complete. There were dials, vials, smiles for miles, worn-out tools, and broken rules. The detritus of experimentation littered the workshop. Every surface unearthed a gem that was new to our eyes and often forgotten or set aside by James. It was clear from the environment that he was a busy man. In fact, it was clear he had been a busy man for too long. His recent, often unheeded call for a pause in production made through his various social media channels was necessary to give the guy a chance to step back, take stock, and decide how next to forge ahead. 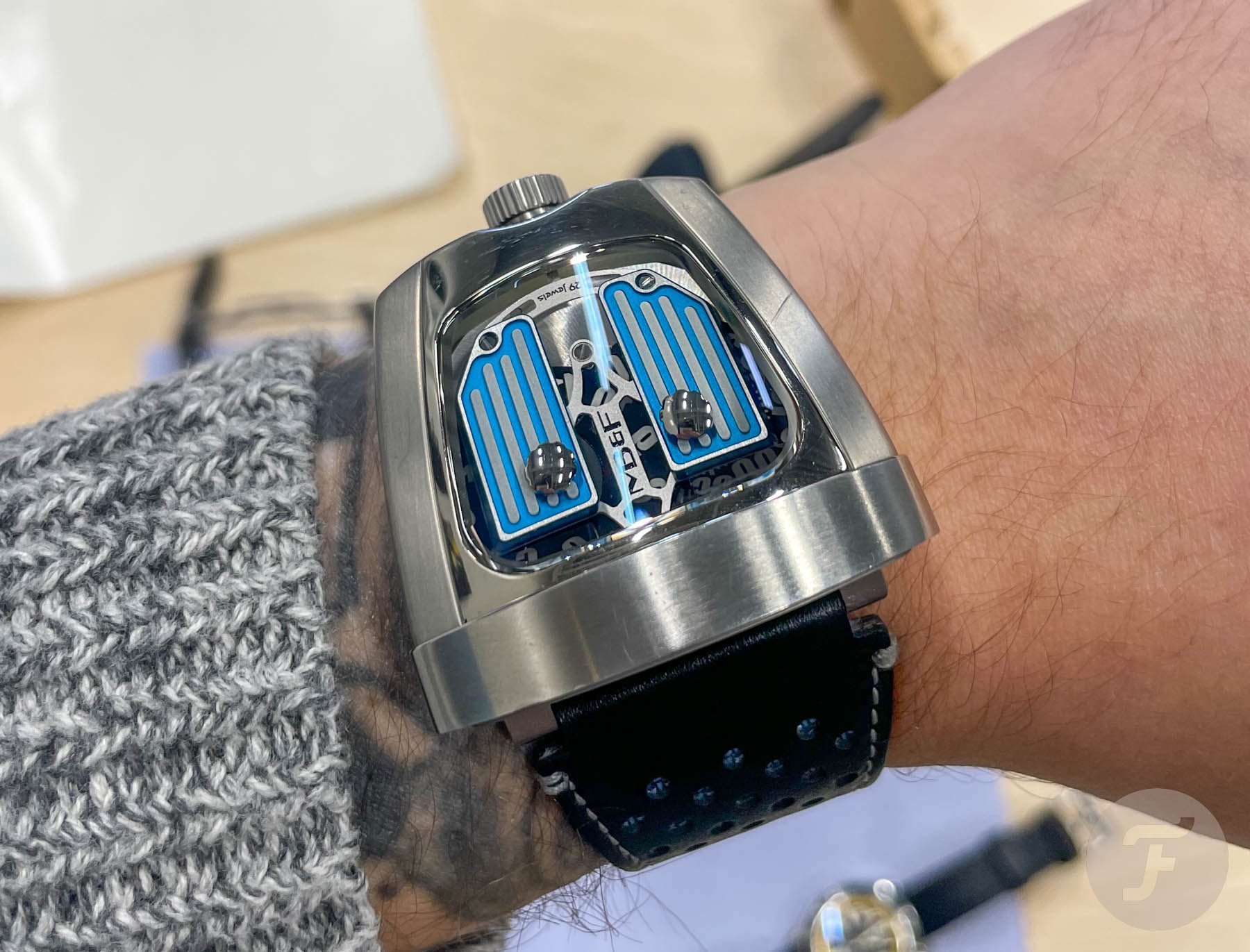 Exploding onto the scene

When James entered the watchmaking industry, he entered with a bang. There was no one to hold his hand and tell him the dos and don’ts of a nuanced ecosystem. He was wined and dined straight off the bat. Then he learned of the laziness and cruelties that can exist beneath the veneer of perfection watchmaking likes to present to the world. His name was up in lights before he knew what was happening. The Black Badger brand never lost its luster in the eyes of others. But it is only understandable that the man behind so many of the most joy-inducing releases of the past decade deserved (and needed) a bit of time to himself. Time to process his success and what in Canada’s name to do with it.

Arcanaut has brought a bit of focus to operations. That seems certain to me. Anders is a rare breed in the industry. He is young in years but old in the head. A sharp and penetrating mind sits behind steely eyes that themselves sit within an affable face. It’s a face that makes you want to present an amusing anecdote rather than the fiscal forecast for the next 12 months. That, in my experience, is a winning combination. 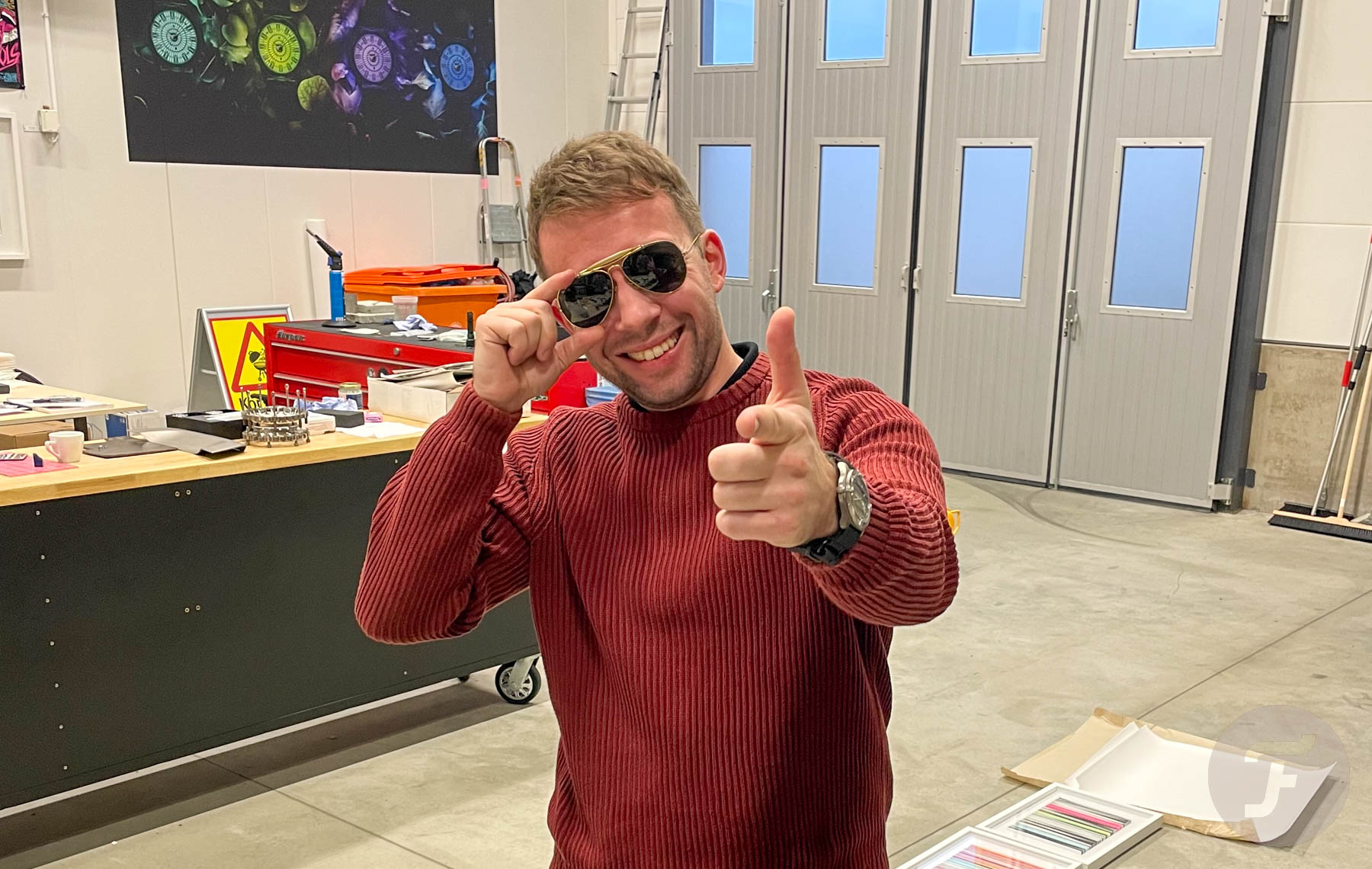 Speaking candidly, everyone in this industry wants success. For some people that means money (lots of it). For others it means recognition. There are those that desire power above all else. But whatever it is that brings someone to watchmaking, everyone in the industry would rather have a good time than a bad one. When you meet people who are self-assured but not arrogant, talented but not a slave to that talent, and friendly because that’s just who they are, you gravitate towards them. Who wouldn’t rather spend their time doing cool stuff with a nice guy rather than sucking up to some spreadsheet-hugging target driver? I mean, you only live once, right?

Anders’s vision for Arcanaut began many years ago, but he spent time refining the idea until he was sure he had something that others would think was as special as he did. A talented designer, the real challenge for Anders was surrounding himself with the right people who could bring those ideas to life. Arcanaut’s flagship case is an engineering challenge. Its “angular pebble” shape would coax beads of sweat to the foreheads of the world’s finest CNC operators. Absolute precision was essential and, after much searching and many discarded prototypes, Anders happened upon a Danish specialist able to produce the case to his exacting specifications. Fusing that case with the deep black D’Arc Matter dial has resulted in one of the industry’s finest truly new watches. Who knows what other crazy dials these two could put inside Arcanaut watches in the future? Watch this space to find out… 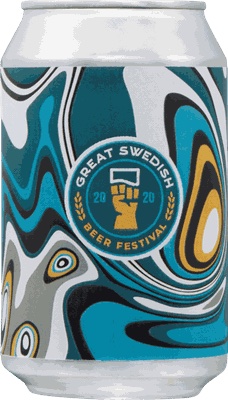 Anders and James have the kind of friendship that has the potential to lead to the birth of a legend. They are two talented guys having a bucket-load of fun. That comes across in everything they do, and that really does matter. These guys aren’t trying to steal your money at all costs. In fact, they’re not thinking about your money. They are thinking about the watches they have created together and exactly what they’re going to do next. 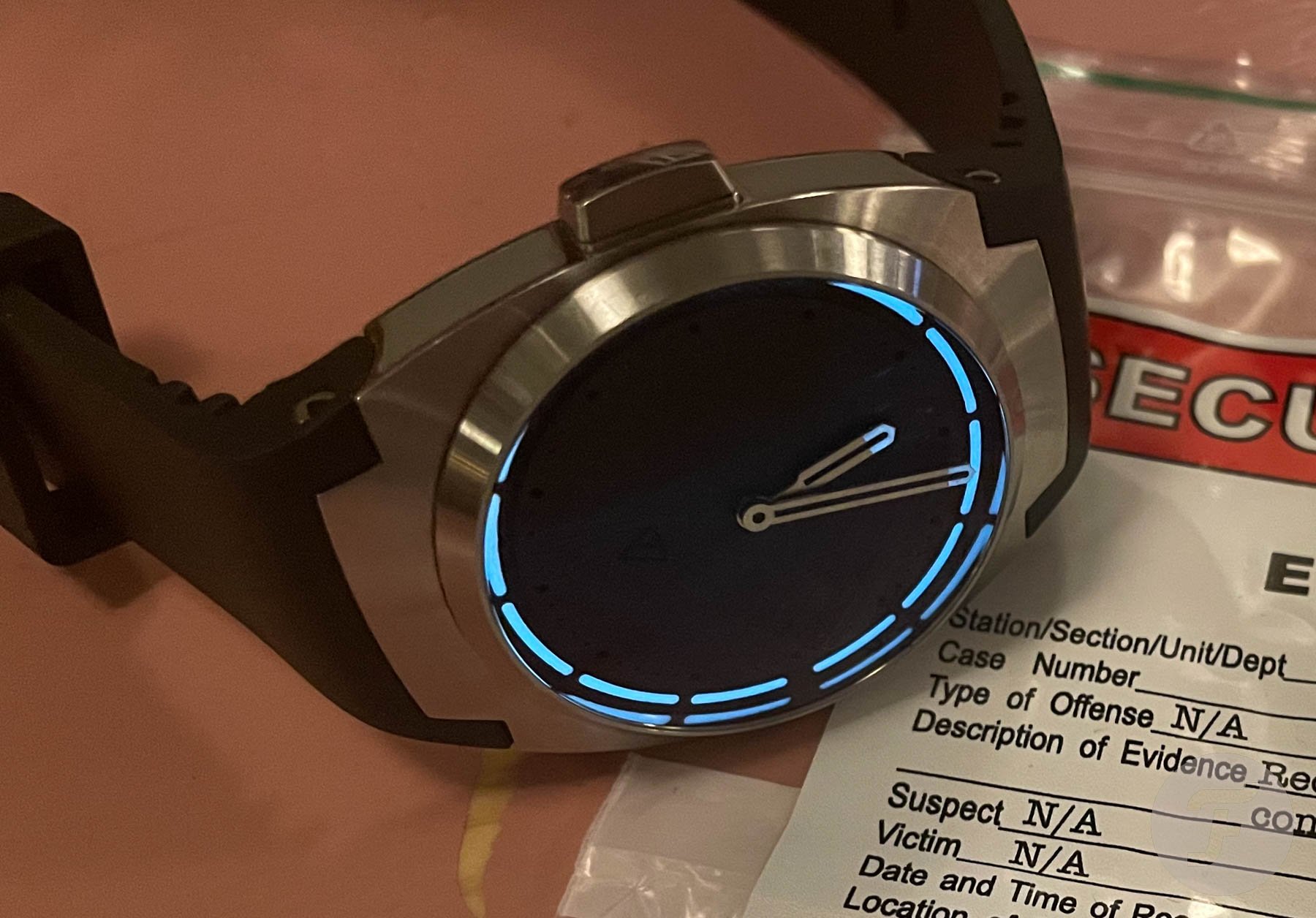 The future is glowing

Anders may not be the best at selling his own brand in words. But he sells it by being so thoroughly accessible, open, honest, and, on occasion (when not goofing around), earnest. His passion is real. His goals are clear. And his watches are excellent. With James officially installed as a co-owner of the Arcanaut brand, the future of Danish/Swedish/Canadian watchmaking is looking in very safe hands indeed. Learn more about Arcanaut here, and check out the official Black Badger website here, but if you want to buy something be patient. Regular production is in hibernation while he’s working on the next big thing.