In what can only be described as an off-cycle surprise, we’re excited to report on the announcement of the Omega Seamaster Planet Ocean Ultra Deep Professional.

It was only a couple weeks ago that we received an invite to a mysterious press release to be held on June 20th in London.  Little information was given aside from the fact that the event would feature Victor Vescovo, who, among other interests, is an adventurer and undersea explorer (he’s even completed the Explorer’s Grand Slam).  The invitation made mention of Vescovo’s “Five Deeps Expedition”, a journey to the deepest spots within each of the five oceans and the fact that he actually set the record for deepest dive at 10,928 meters (35,853 feet)!  On his wrist was an Omega Seamaster Planet Ocean, but on the outside of his submersible, the DSV Limiting Factor, and also on two of his three roving Landers, there was another watch that made the trips.  Enter the Omega Seamaster Planet Ocean Ultra Deep Professional. 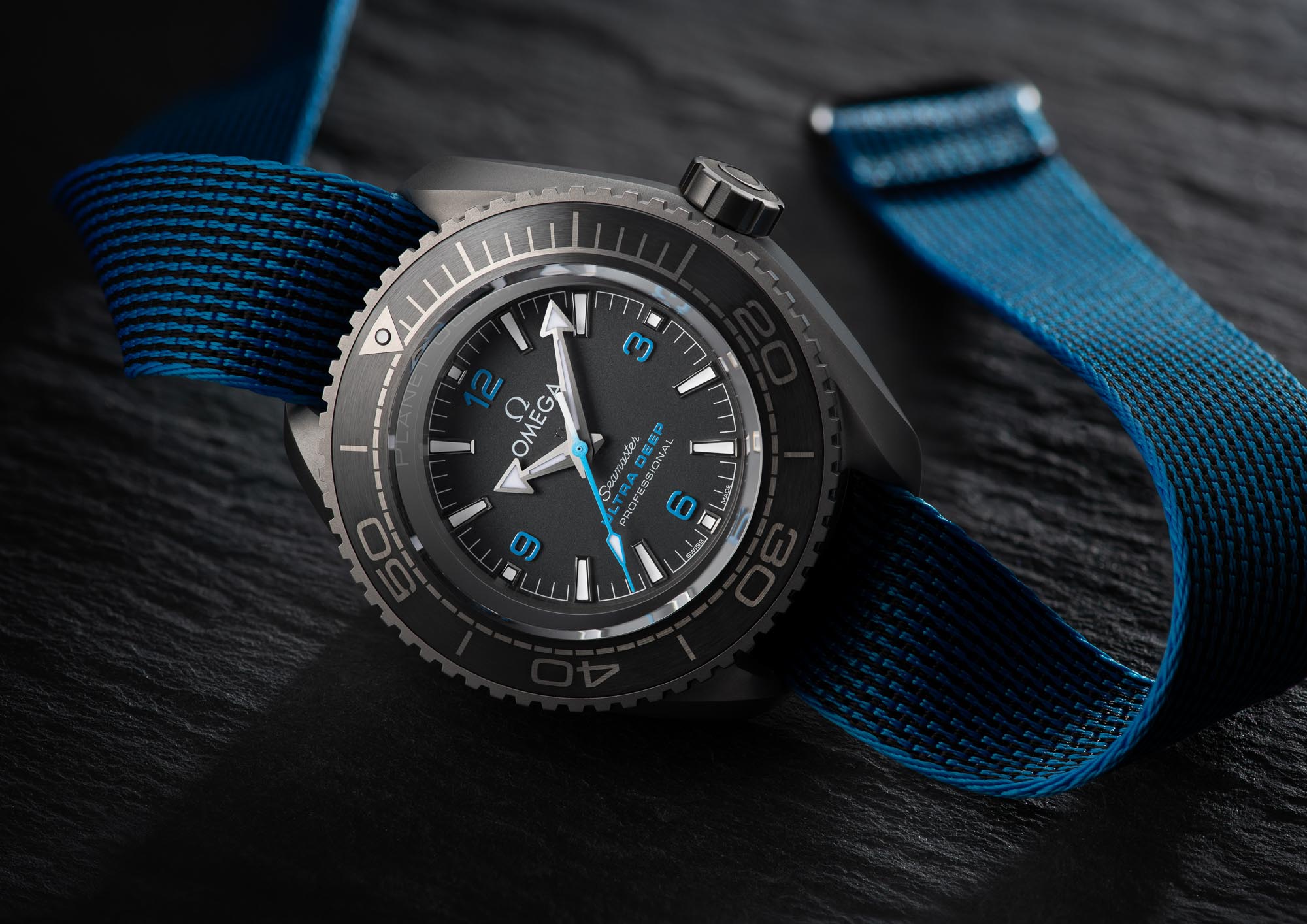 Let’s get this out of the way, there are three Omega Seamaster Planet Ocean Ultra Deep Professional watches in existence.  This is not a watch that will be made available to the public in this form, but what we’re seeing today ushers in some serious innovation that will make its way to watches that you will eventually be able to buy.  In automotive terms, think of it as a bit like “race on Sunday, sell on Monday” if you will.

The Omega Seamaster Planet Ocean Ultra Deep Professional is made of forged Grade 5 titanium and from cutoffs of the same material used on the hull of the Limiting Factor submersible used by Vescovo.  The hull material was DNV-GL certified (DNV-GL is a 3rd party certification company) and the three Omegas contain the same DNV-GL stamp in their case backs.  But we’ve seen titanium often as a case material on dive watches, so that’s not the innovation that excites me.

The Omega Seamaster Planet Ocean Ultra Deep Professional is tested to a water resistance of 15,000 meters (49,212 feet).  Let that sink in.  When you fly at 30 – 35,000 feet, add another 50% and then put that under water – the forces are roughly 16,000 psi!  No, that depth doesn’t exist within our oceans, but Omega wanted a 25% safety margin.  Omega achieved this depth with its case construction – the use of open lugs being part of the design – but also by hot form bonding the crystal to the case with the use of Liquidmetal.  Liquidmetal provides a firm, yet flexible seal and allows Omega to eschew the use of polymer seals and to use a thinner crystal.  This thinner crystal helped lead to an overall thickness of 28mm.

Watching two of the industry’s biggest guns duke it out on sea floor is pretty incredible and brings back thoughts of Cousteau, the Trieste, and exploration in general. 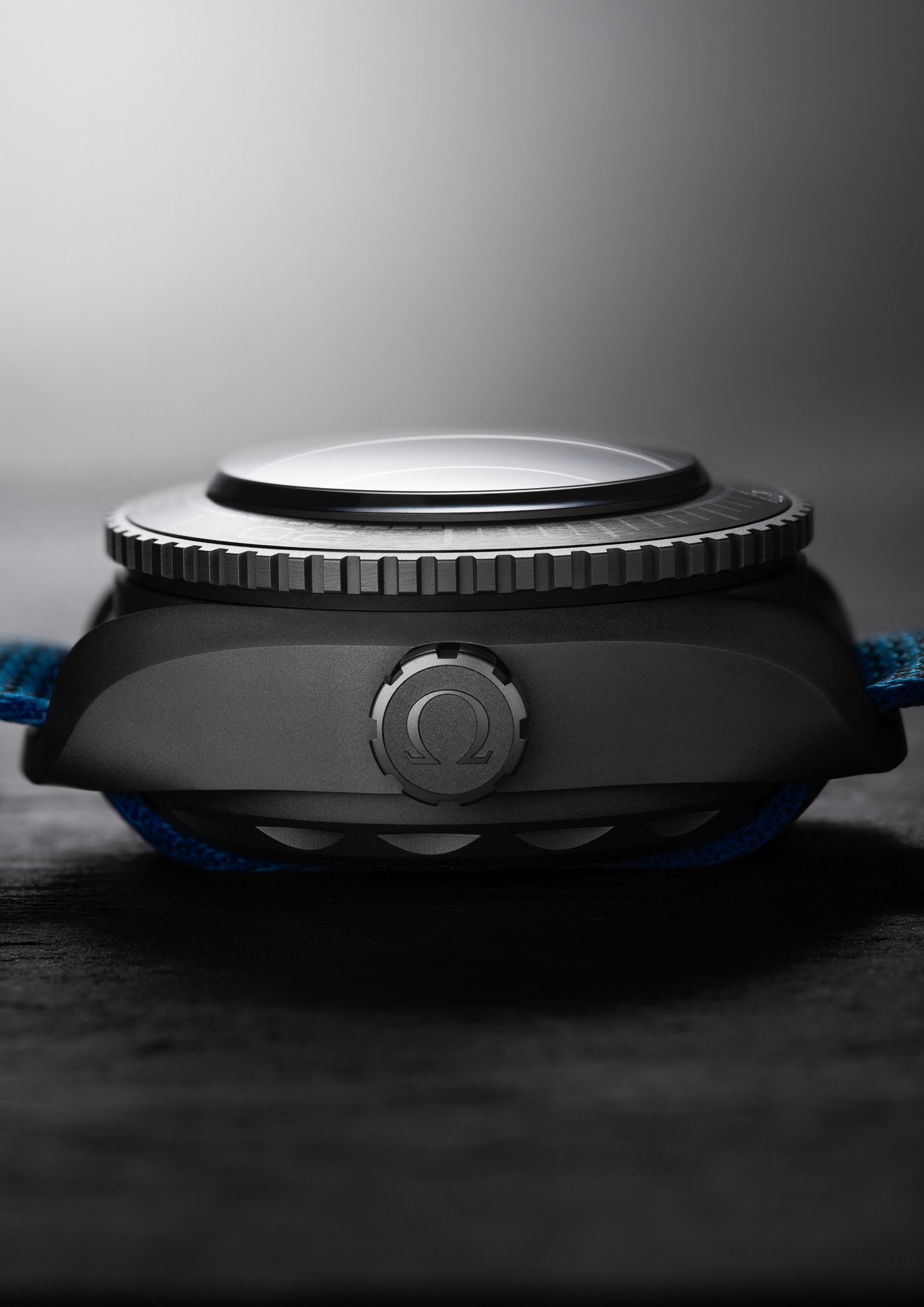 If 28mm sounds thick, it is.  The Omega Seamaster Planet Ocean Ultra Deep Professional is not a small watch (diameter is 52.5mm w/o crown), but the number is significant because it bests the 28.5mm thick Rolex Deep Sea Challenge Sea Dweller that accompanied James Cameron to the bottom of the Mariana Trench at 10,916 meters deep in 2013.  Oh, and the Rolex was rated to a depth resistance of “only” 12,000 meters.  I smell a game of one-upmanship and, frankly, I like it.  Watching two of the industry’s biggest guns duke it out on sea floor is pretty incredible and brings back thoughts of Cousteau, the Trieste, and exploration in general. 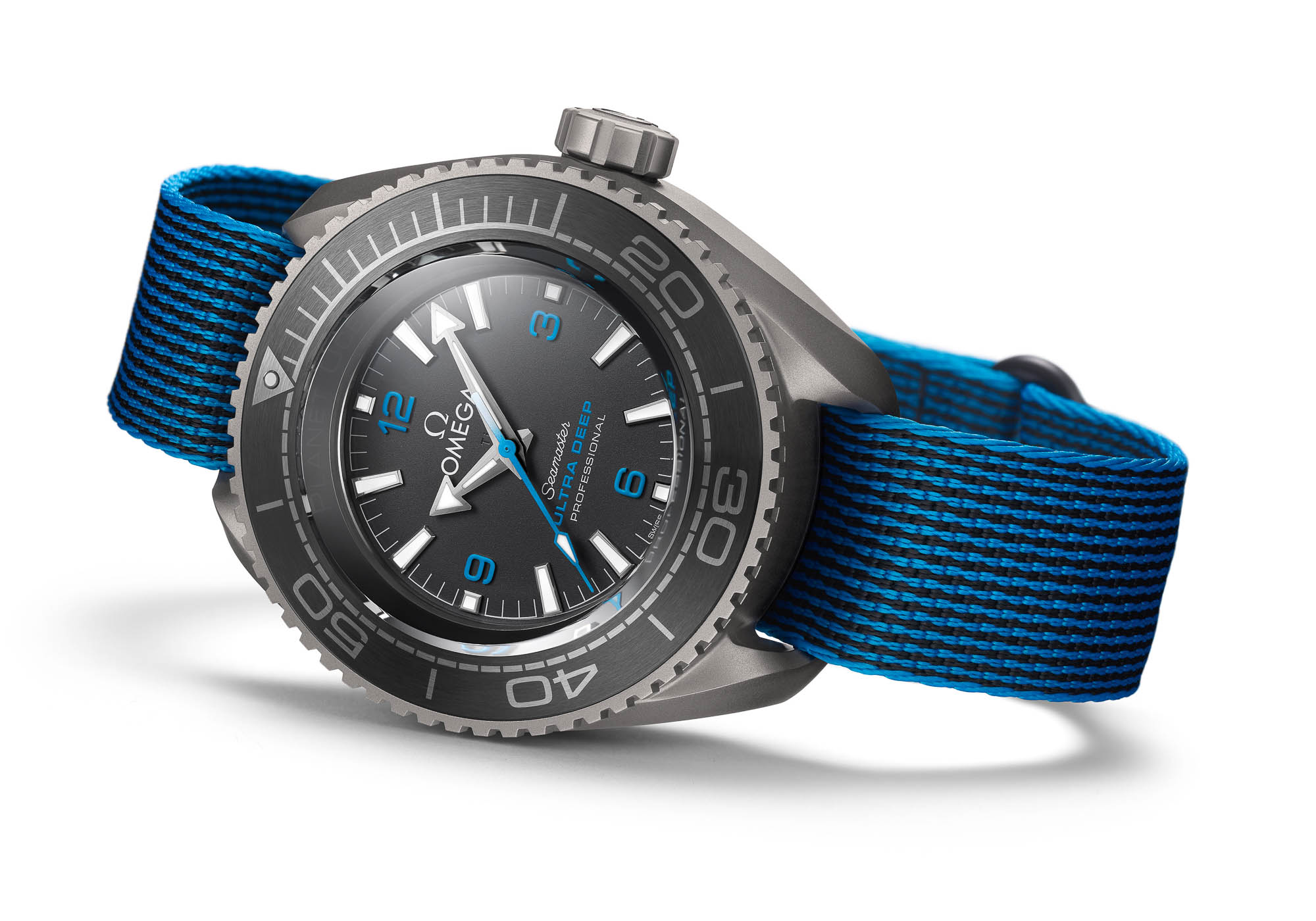 For fans of the Speedmaster, the Omega Seamaster Planet Ocean Ultra Deep Professional drew on the brand’s experience in space when finding a solution for the strap.  Omega outfitted the three Ultra Deeps with a polyamide strap and Velcro closure.  So while your Speedy might not like diving, its strap is clearly comfortable at depth.

After the Seamaster Planet Ocean Ultra Deep Professional was put to the test during the deepest dive at 10,928 meters, it has been submitted to the METAS lab at Omega’s HQ in Bienne. Here, all the watches have been put through more than 10 days of testing, according to the Master Chronometer standards, and passed. Inside the Planet Ocean Ultra Deep, there’s Omega’s caliber 8912 movement. This movement is also used in that other professional diving watch by Omega, the Seamaster Ploprof 1200M in titanium. It is a no-date version of the caliber 8900 that has been used in a variety of Omega models but debuted in their Globemaster collection. This 8912 movement has the same specifications, without a date function: 60 hours of power reserve, Co-Axial escapement, ticking speed of 25200vph and an hour hand that can be set independently. 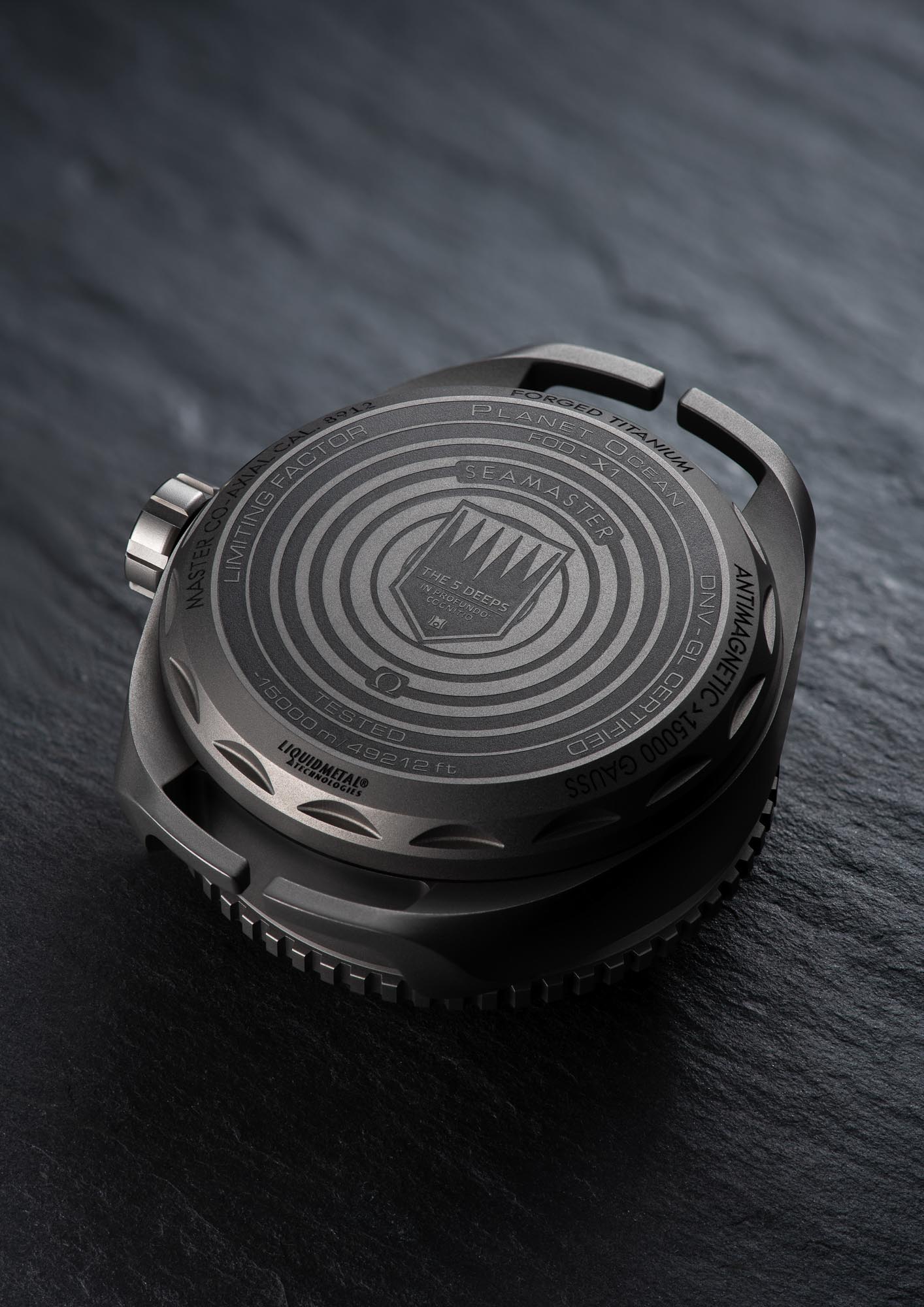 Besides the fat 28mm case based on the existing Seamaster Planet Ocean design, this watch has a design feature that I love. Have a close look at those lugs. Omega refers to them as “Manta” lugs, as they should remind us of the manta fish. According to Omega, these titanium lugs are left open to lower the risk of exceeding material limitations at full ocean depth as both the watch and strap can be subject to high traction loads. To be honest, I wouldn’t mind if Omega would take the manta lugs into a production Seamaster Planet Ocean at some point. They look cool. 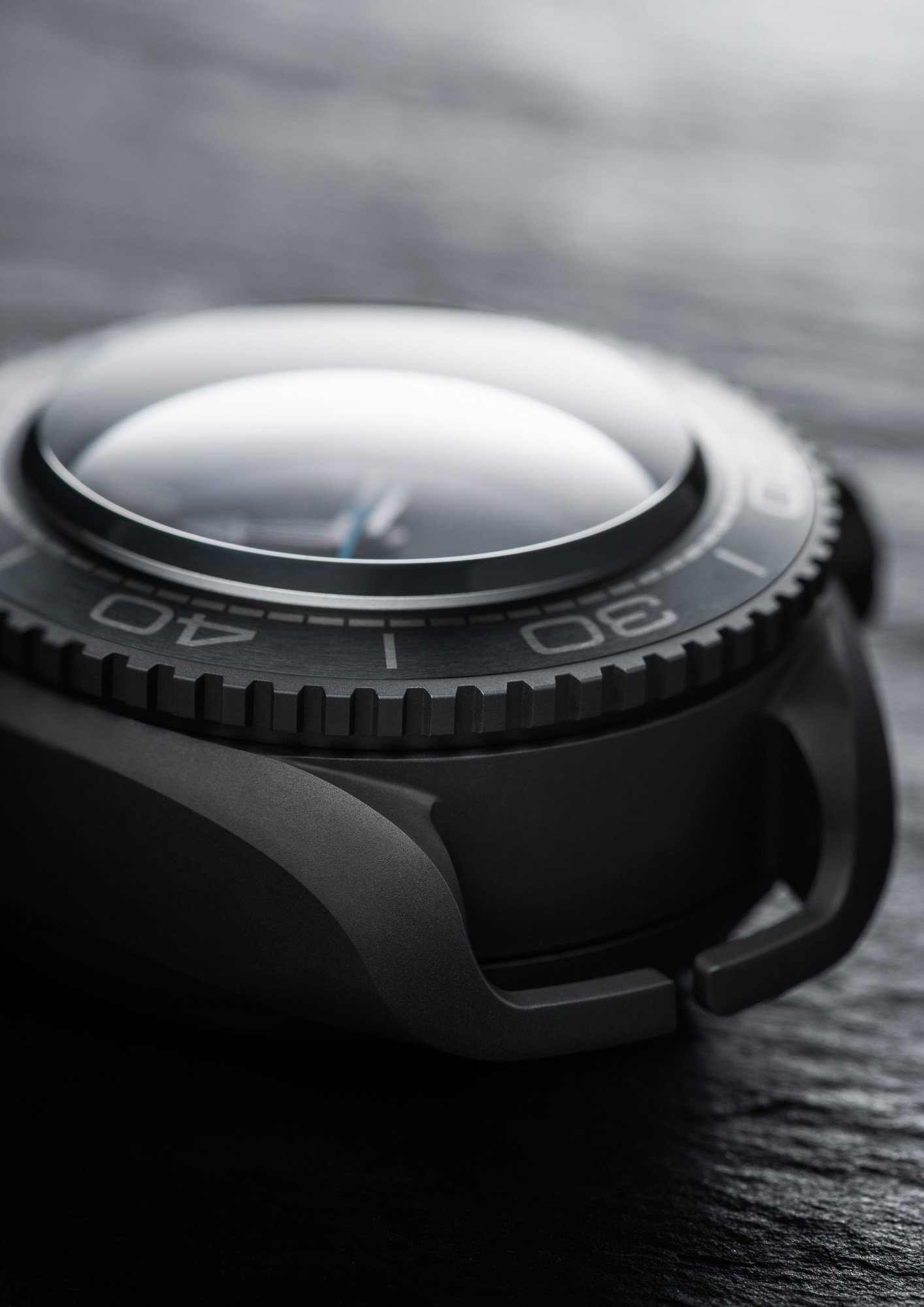 I feel it is a wise decision by Omega to create a design for this Ultra Deep that is based on an existing (and successful) model, like the Seamaster Planet Ocean. It has the typical Omega design code and although this Seamaster Planet Ocean Ultra Deep Professional will never be made for the market, there’s room to create a spin-off (with “Manta” lugs, I hope) for normal wear (and diving).

Looking at this watch from the front, it simply looks awesome. The 28mm thickness is where you know it isn’t really suitable for daily wear. The Seamaster Planet Ocean Ultra Deep Professional (reference 215.92.52.21.99.001) is a watch that demonstrates the knowledge and skills that Omega has in-house, but it also shows a very cool concept that I hope will make it to the boutiques after it has been on a diet.

Hot Topics
Introducing: The Omega Speedmaster Super Racing With Spirate System
165 comments
New Release: The Limited-Edition Seiko Prospex SLA067J1 Diver
65 comments
My Predictions For New Omega Speedmasters In 2023
60 comments
The Best Independent/Microbrand Alternatives To The Rolex Explorer In 2023
53 comments
The Time To Buy Is Now: How The Current Economic Climate Influences Watch Buying And How You Should React
51 comments
Popular
Hands-On With The Seiko Prospex Dawn Grey Series
Robert-Jan Broer
12
Grand Seiko SBGA211 ‘Snowflake’ And Why I Didn’t Buy It
Robert-Jan Broer
23
Two Patek Philippe Nautilus Watches: 3700/1A Versus 5711/1A
Robert-Jan Broer
16