A perfect example of brand growth, this one blew me away.
Rob Nudds
comments 20
Share

You know me by now. I’m a fiery character. I’d love to say it’s in my blood, but my folks hail from Norwich — hardly a town known for its hellraisers. Somewhere along the way, an unnaturally large cachet of passion developed within me. This passion frequently escapes in the form of wild rants either aggrandizing or assassinating the latest watch to pass over my desk and/or spend time on my wrist.  Today, I am pleased to say it will be the former. The Echo/Neutra Cortina 1956 Hand-Wound Chronograph caught my eye the moment it was announced. I went back on forth on whether to get one but finally decided to pull the trigger. My only regret? Not getting one sooner. 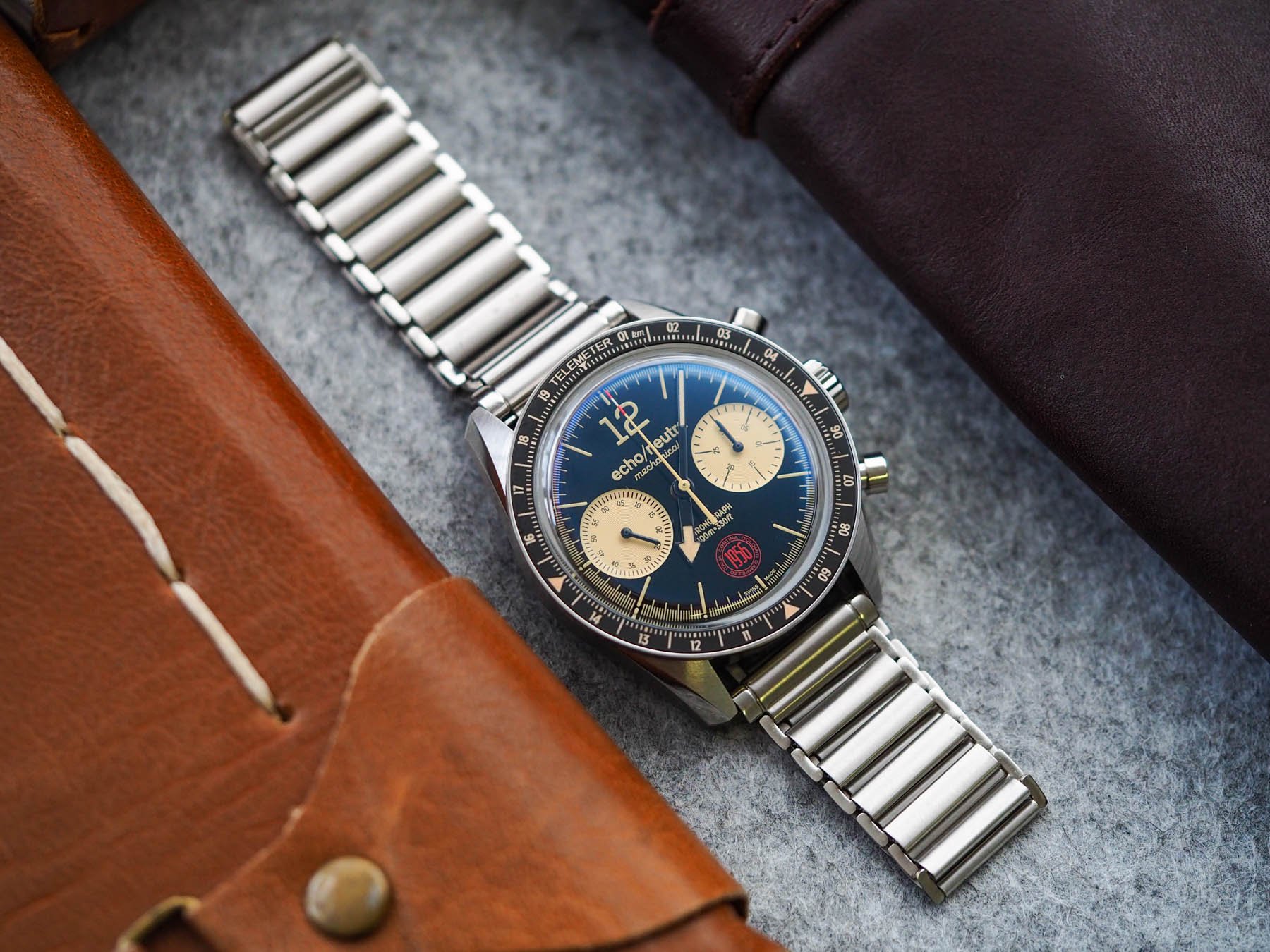 The watch arrived last Thursday. I returned home late from the office to find it waiting for me. It was half-past midnight and I was dead on my feet. However, as I’m most of you will understand, nothing can get between me and a package containing a new watch. After years of practice, I’m able to unwrap deliveries at lightspeed without risking any damage to the goodies within. That skill served me well as damaging the packaging of the Cortina 1956 would have been a real shame. And thus it is here that the story of tangible brand growth begins… 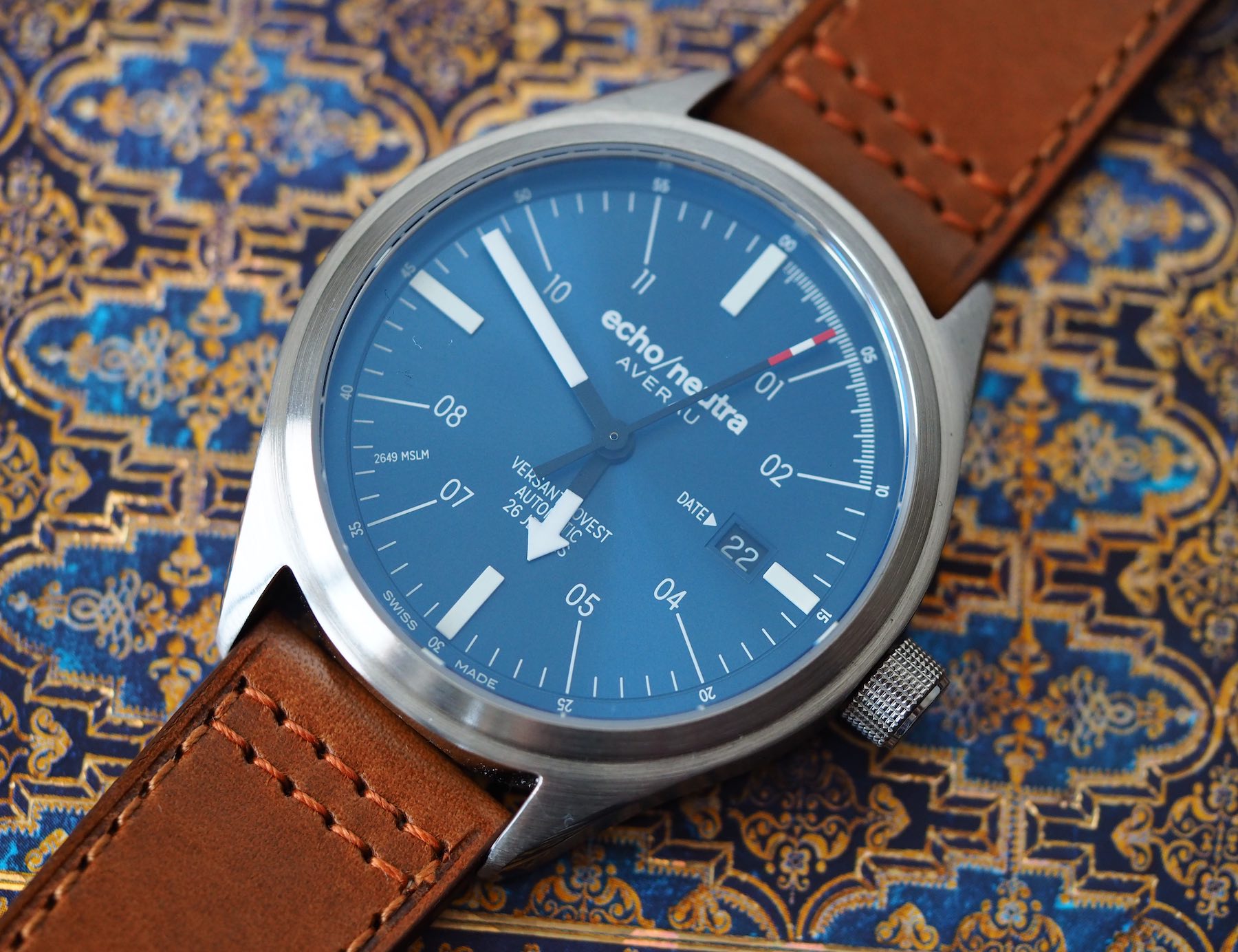 I also own the brand’s inaugural model, the Averau. It was a fine watch that I enjoyed wearing for a while, but there were some things about it I wanted to see changed, specifically the hand length and the case size (I thought the diameter could have been smaller in light of the lug style). I spoke to Nicola, the brand founder, about these takeaways and he gratefully received the feedback and kindly kept me abreast of the Cortina’a development as it progressed. Everything I saw from his sketches to the finished article when it launched online resonated with me. I was not prepared, however, for how well this whole package comes together in real life, in natural light, and on the wrist. 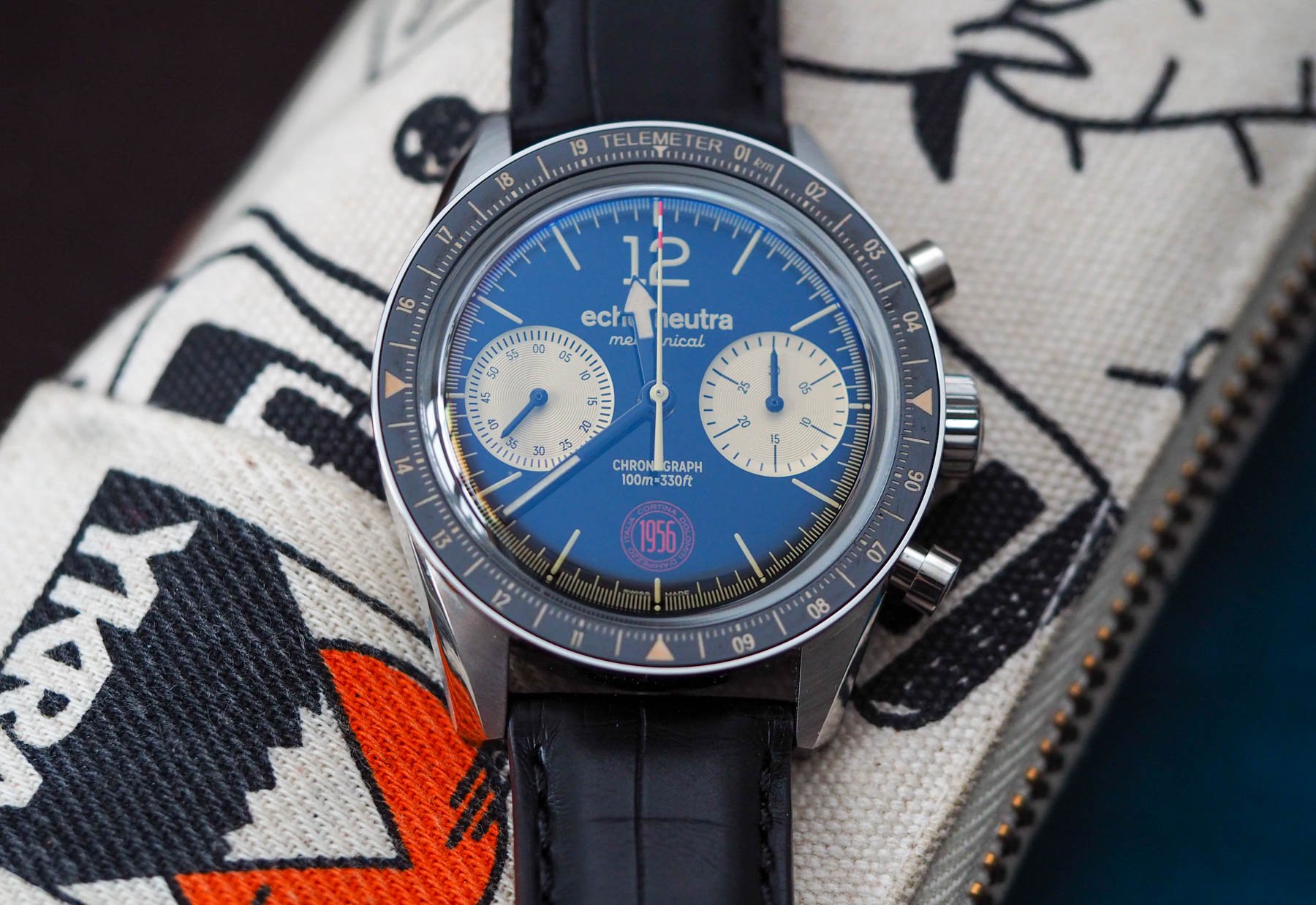 The box set the tone. While the Averau came in a robust cardboard box, the Cortina comes in a wide, satin-finished wooden box with a polished silver button closure. Inside, the watch is safely recessed in high-density foam. There are also boasts cut-outs for the spare spring bars, a polished buckle, and a second strap. I took the watch on the croc-leather (for the vintage vibes) and the tropic rubber (because I find that strap style to be a safe default should I not favor the leather out of the box), but I was seriously tempted by the buffalo leather strap, which is really more my kind of style. 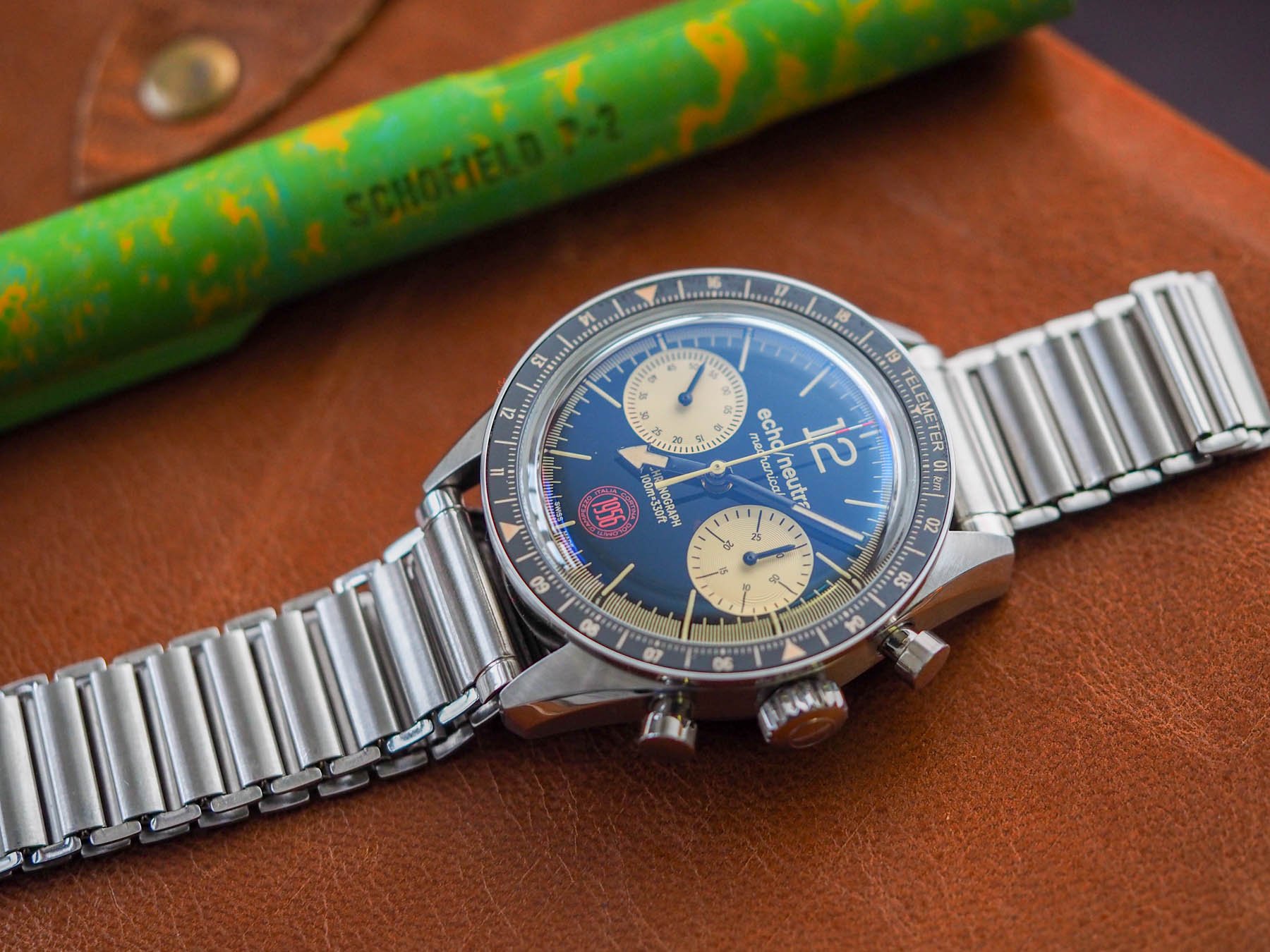 However, I decided to let the watch lead me, so on this occasion, I took the croc, which wore very comfortably on the second-to-last hole straight out of the box. I must admit, though, it didn’t stay on its intended strap for long as on that very day I found myself charged with writing up the Forstner Klip bracelet for last Monday’s Topic of the Week. I fetched my Klip, which had been living on the Nezumi Voiture, and suddenly realized how nice it would look on the Cortina. Immediately I flipped it and found it to be so comfortable, I have kept it on there ever since (check out the photos of the Cortina on the Forstner Klip here). 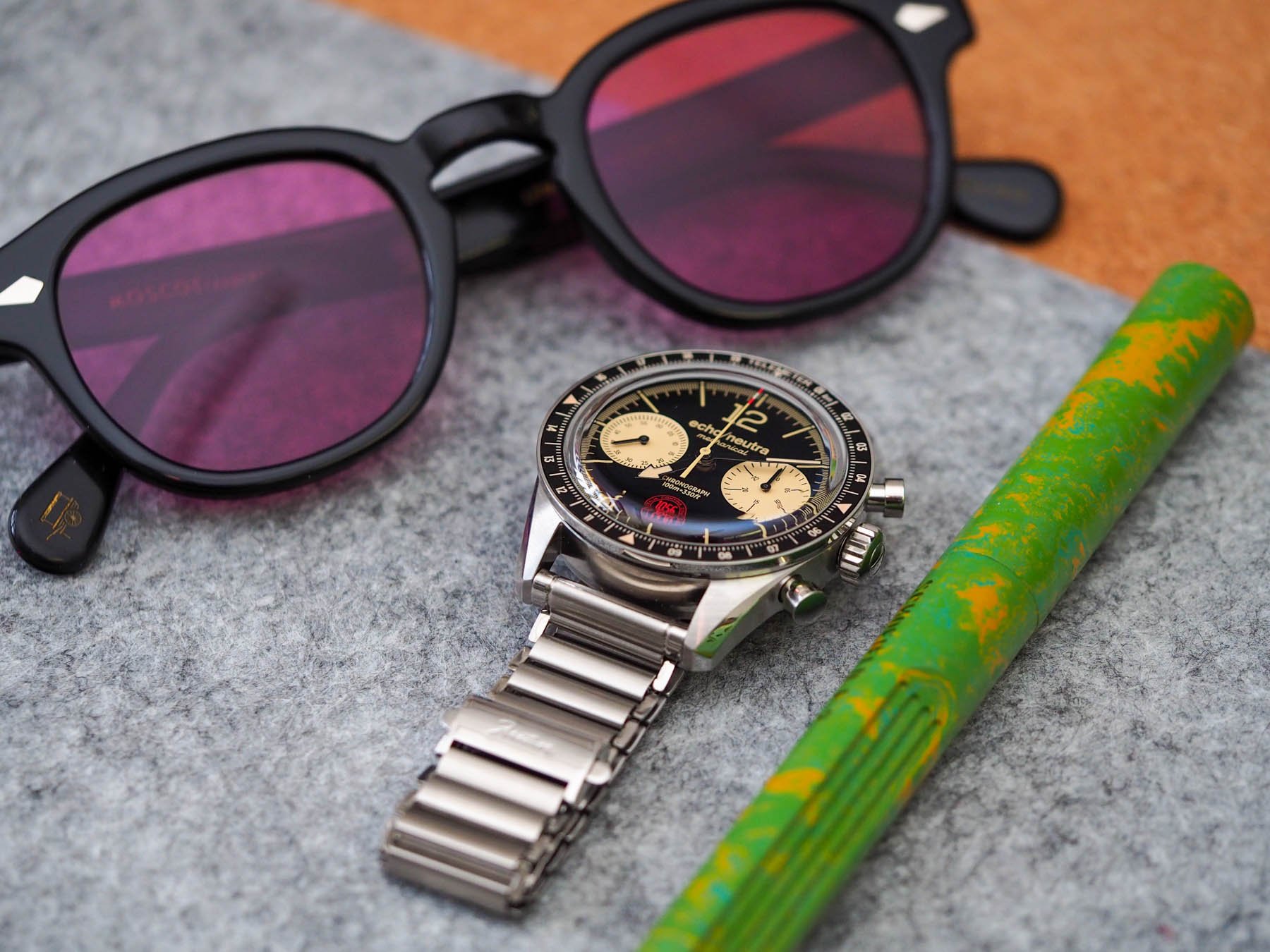 An instruction manual and guarantee card occupy neat leatherette pouches on the underside of the branded box lid, rounding out the impressive presentation of the Echo/Neutra Cortina 1956 Hand-Wound Chronograph. But what about the watch itself? The massive upgrade in packaging promised much. Immediately out of the box, the watch starts to deliver. So clear was this watch’s impact on me as soon as I rolled it around in my hands a couple of times that I started making notes on my phone right away. 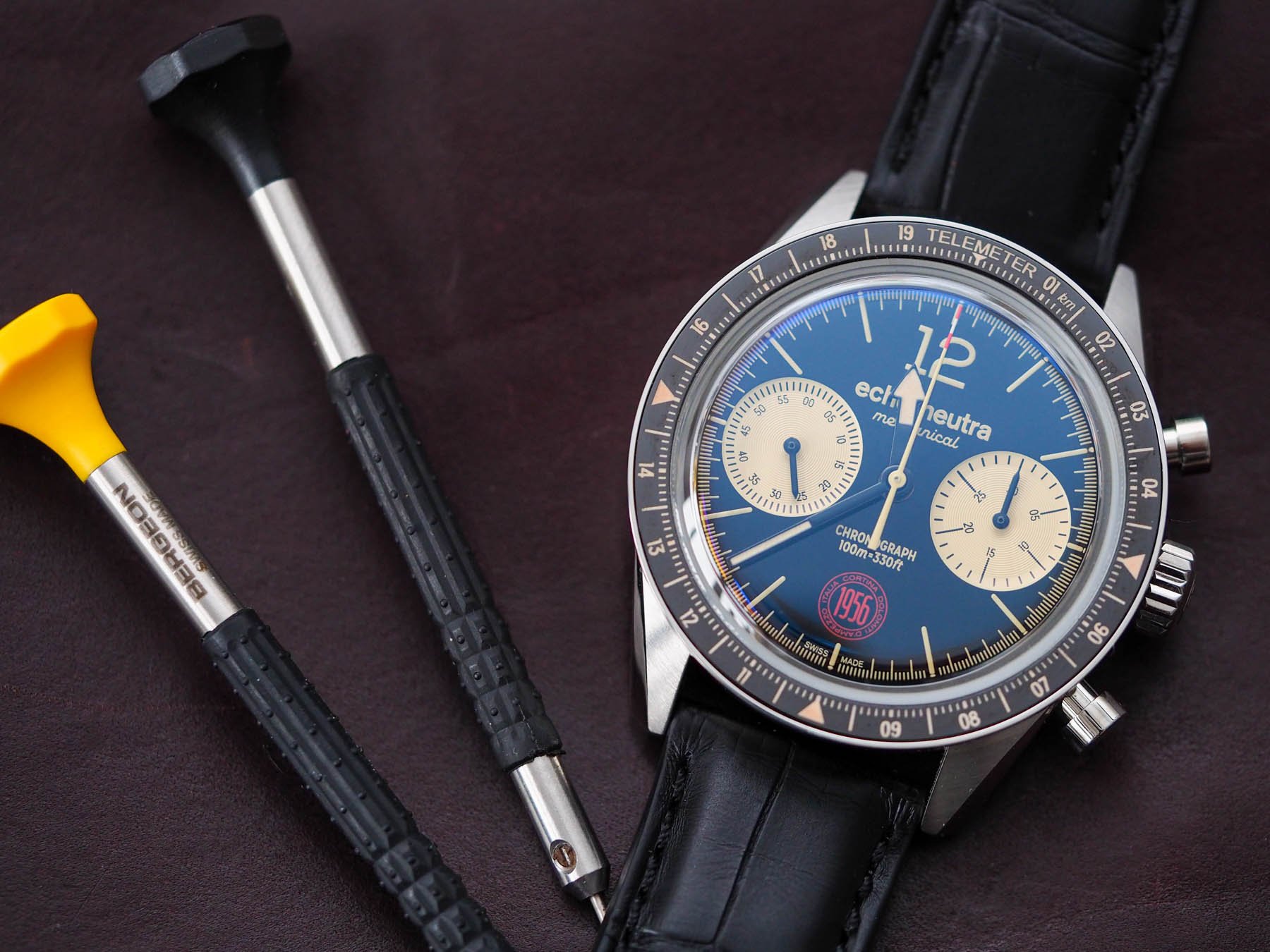 You might think that is normal for a watch journalist, but for me, it is quite unusual. I tend to hit the keyboard immediately and talk through a watch as I’m building a post. In this case, I was desperate to remember every detail that hit me like a runaway train the moment I strapped it on.

Let’s start at the very top. 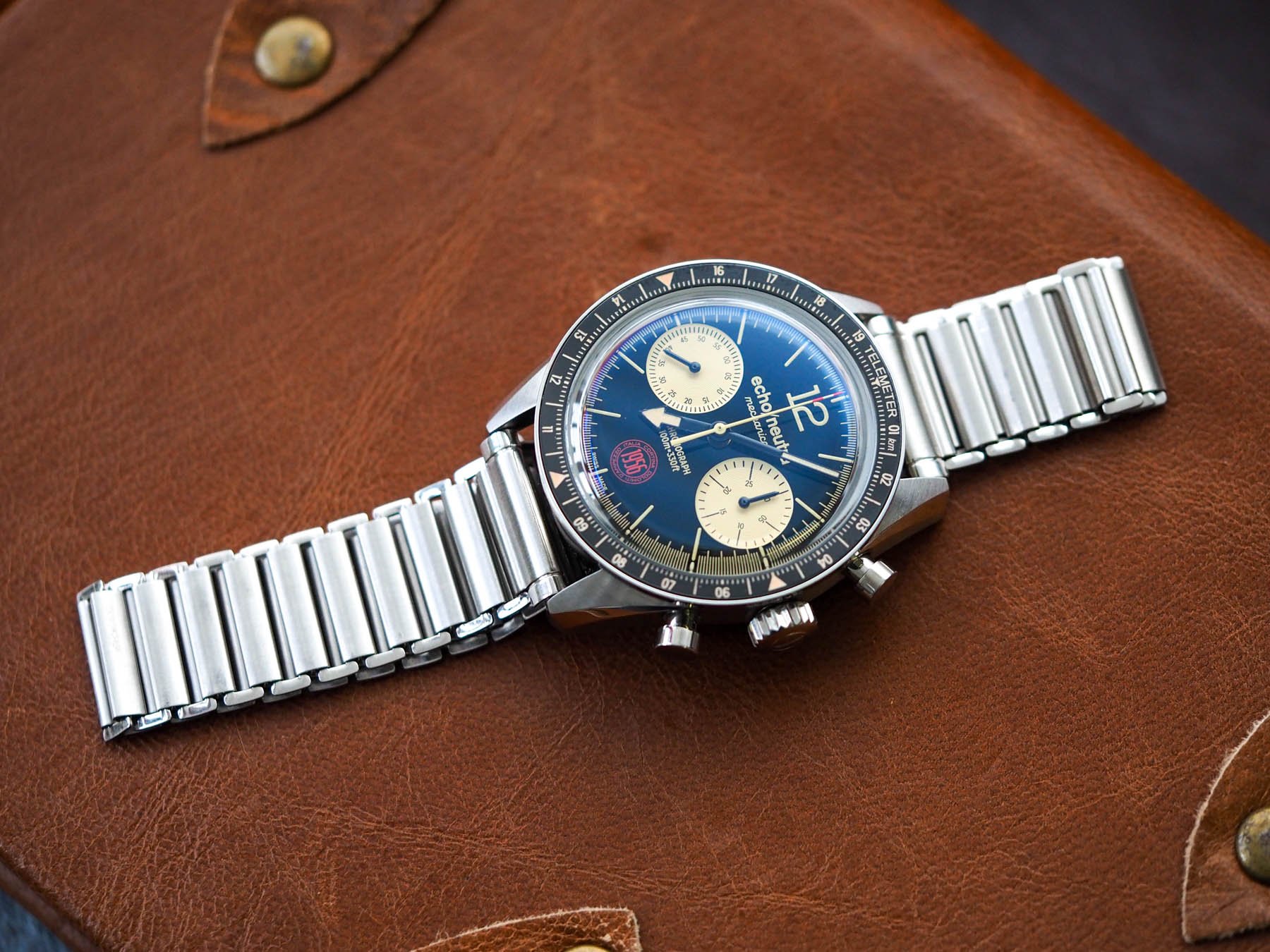 The watch, unsurprisingly, uses a sapphire crystal. More unexpectedly, however, this crystal is a boxy double-dome, angularly reminiscent of a Hesalite crystal from the era that gave this watch its name. Very unusually for 2021, the crystal has been treated with blue AR coating, which used to be very common but fell out of favor in recent years. I’ve always lamented its tumble in popularity as I love, love, love the blue shimmer I get when the light catches this watch in the perfect way. 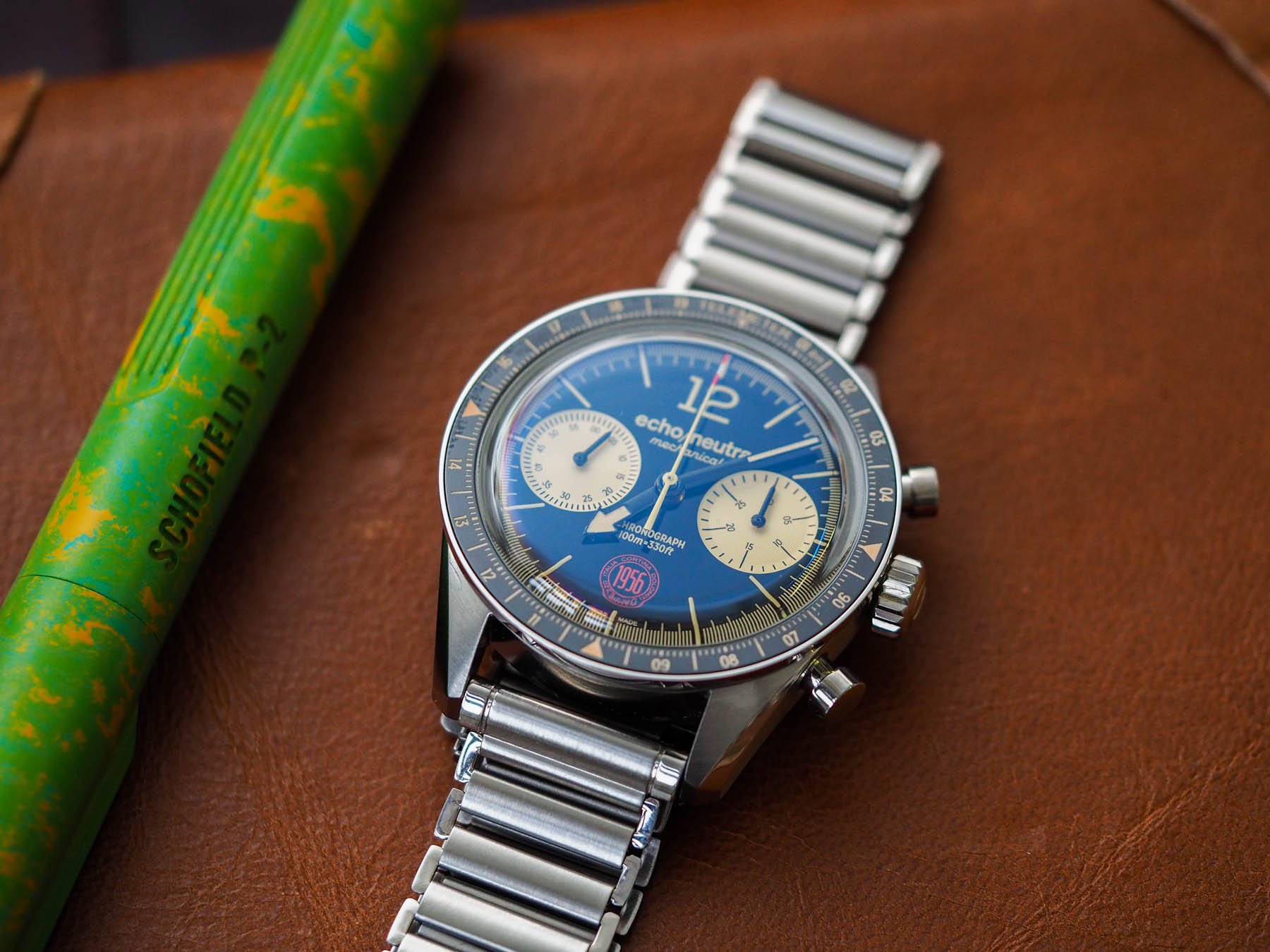 Surrounding this crystal is a fixed ceramic telemeter scale. This scale is very interesting because it looks significantly different in real life from the soldier shots on the website. It looks infinitely better and much more luxurious on the wrist than I imagined it would. Firstly, this bezel is flat, not angled as I took it to be from the press photos.

Moreover, it has a high gloss finish, which, given the use of a bubble sapphire, means this watch has an extremely light-friendly visage that makes it gleam in a far more luxurious manner than its styling or heritage-inspired colorway might suggest it would. 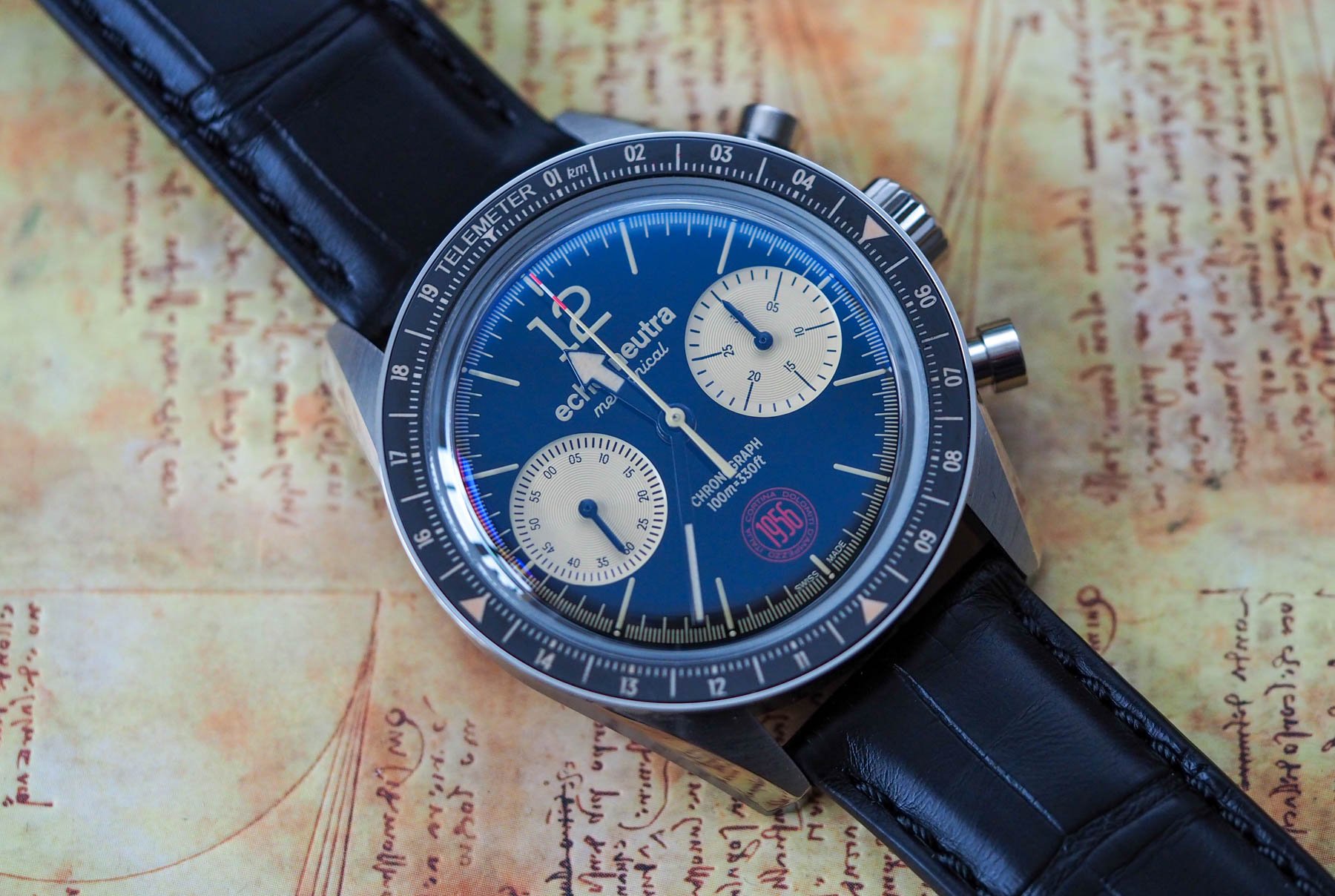 Before we get inside this beauty, let’s look at the case. With a 40mm diameter and a 14.1mm thickness, a telemeter bezel, twin sub-dials, and a lot of contrast-color dial printing, this watch appears even smaller than its pleasingly restrained proportions indicate. This really helps hammer home its vintage credentials which have been sympathetically integrated with what is otherwise a really modern watch. 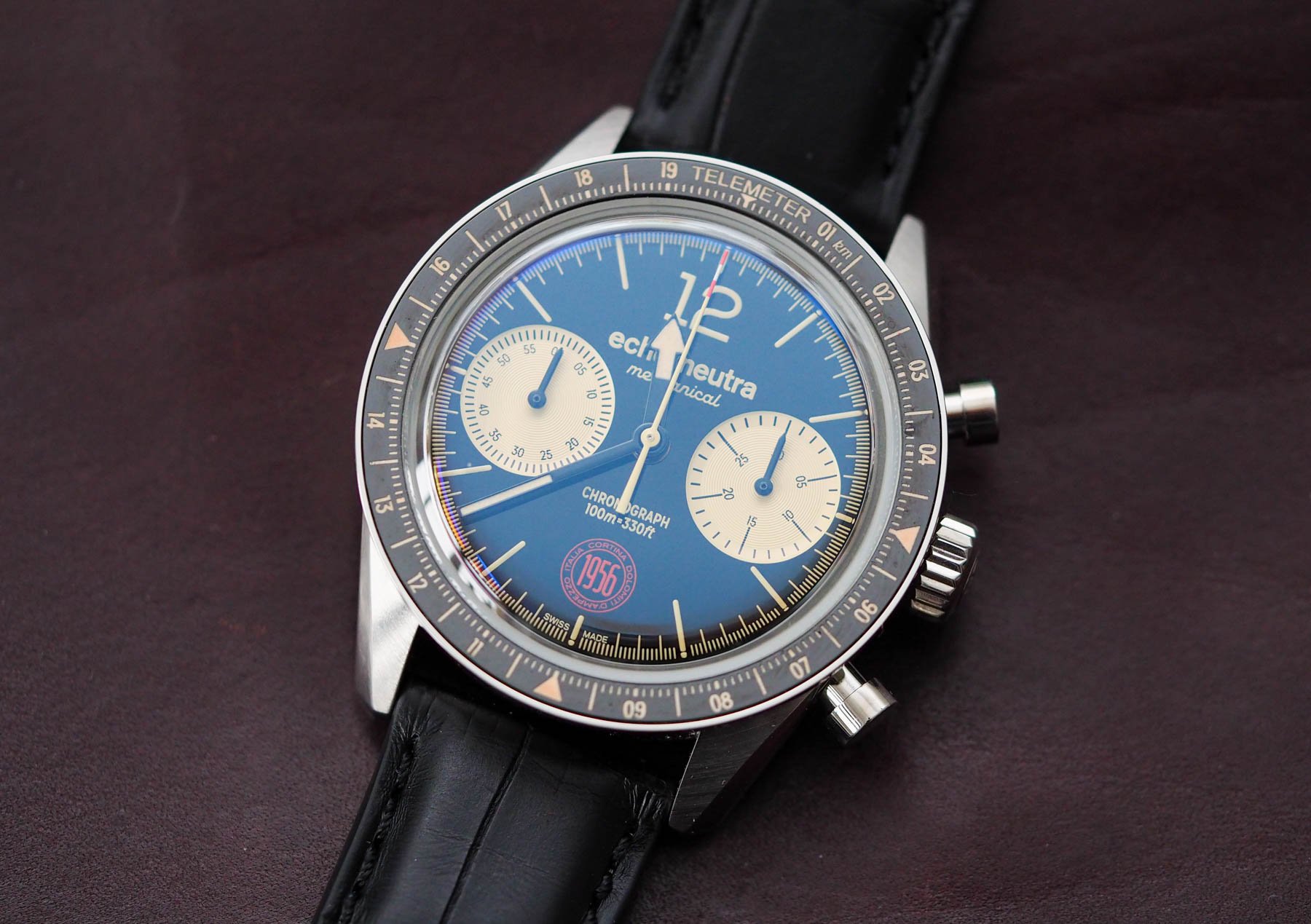 The lug-to-lug is a super compact 46mm still, but these lugs knock the socks off the brand’s first attempt. They are chunky, in perfect proportion with the stout case. The wide, sprawling chamfers are wickedly effective when it comes to reducing the watch’s total bulk (actually and visually). The chamfers are not only extremely flared but are also polished, which breaks up an otherwise brushed finish. 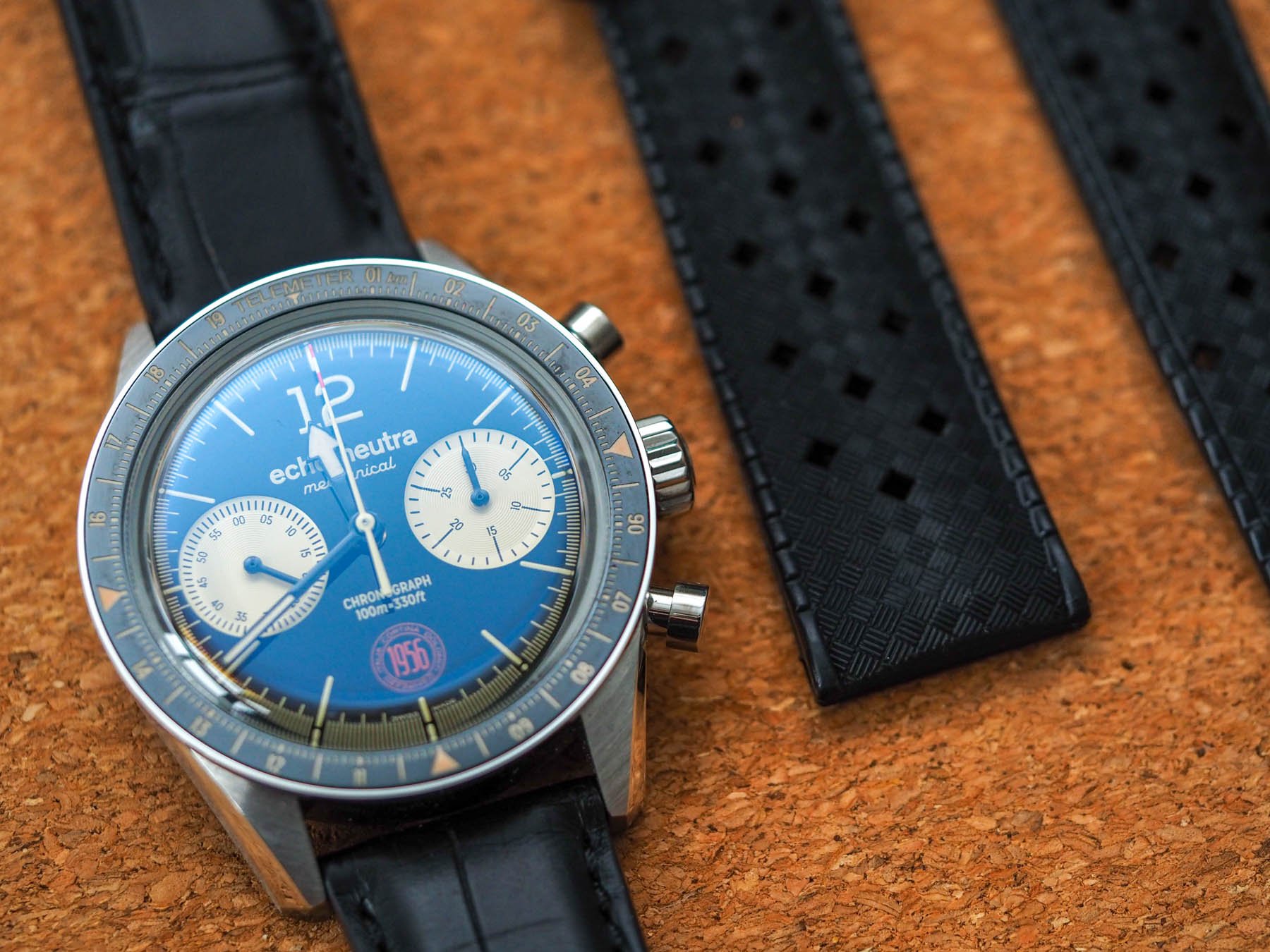 I have to say that the brushing is really good. A lot of much cheaper watches are brushed. But it is clear upon close inspection that not all brushes are created equal. I’ve said this before (often in defense of my favorite microbrand, Laventure) but it is so incredibly hard to see the difference in finishing quality online. I can truly say that the brushing here is very good. It is perfectly in line with the price point and big brand competitors. 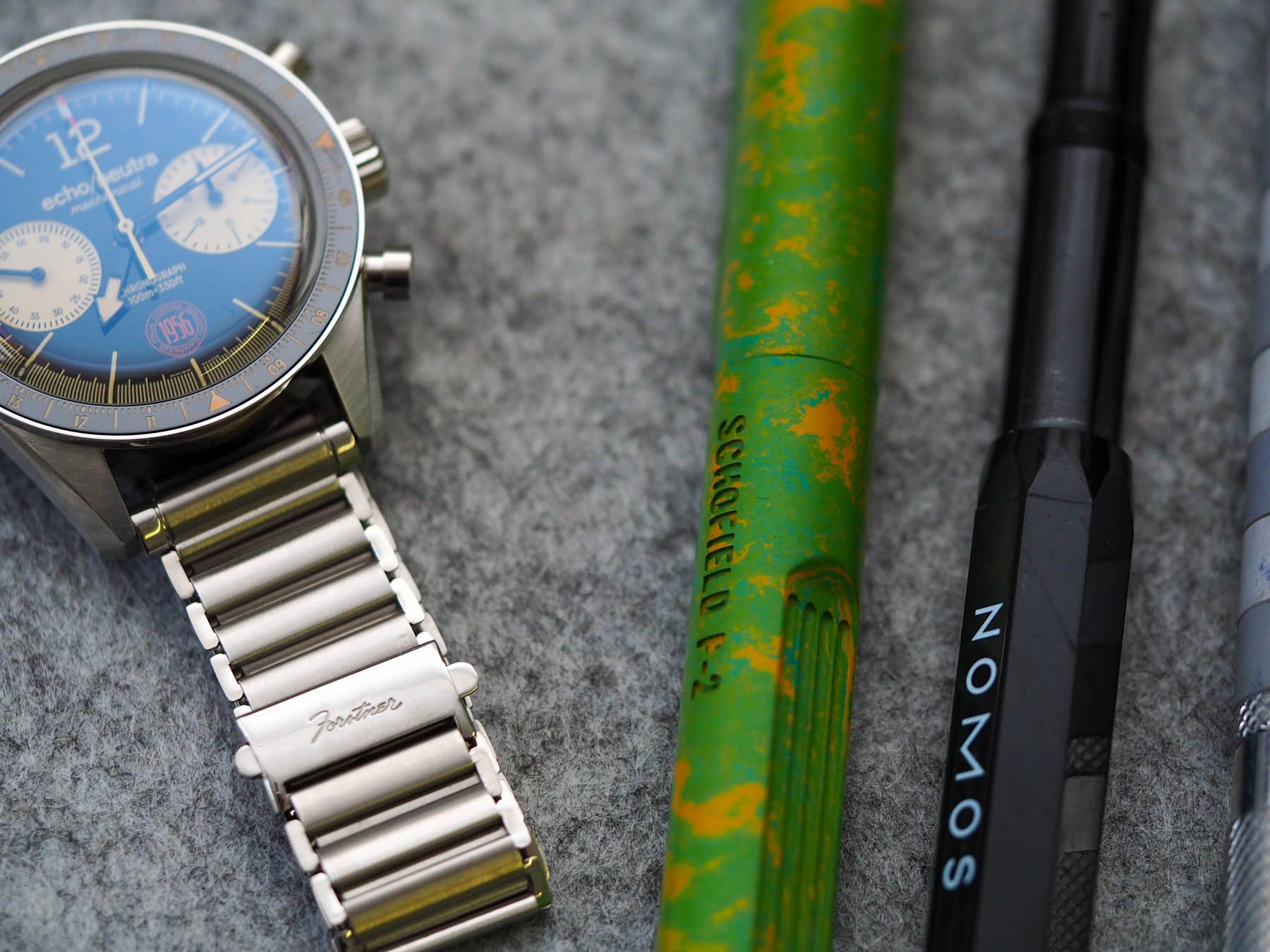 The crown, pushers, and buckles

The crown and buckle both boast a new “mountain logo”, of which I am a fan. I really liked the more complex crown logo of the Averau, but it was a bit too finicky given the small space it had to play with. Here the crown logo (seemingly a new secondary mark for the brand) is perfectly sized, clear, and simple. It does the job well.

The crown itself is not particularly remarkable for the design but is a nice size (7.5mm in diameter up by over a millimeter when compared to the Averau) and very easy to grip and turn. Traditional pump pushers flank it and were the perfect choice for this design (I’m not sure any other pusher style would have worked here). The buckles (that’s right, there are two) both feature the new secondary logo. One buckle (which I call the “rucksack” buckle on account of it looking like the kind of thing you’d find on Sherpa Tensing’s 1953 backpack) is more angular and brushed, while the other is decidedly more “stock-looking”, smoother, and polished. I prefer the square buckle of the two. I liked this feature on the Averau and I like it here. 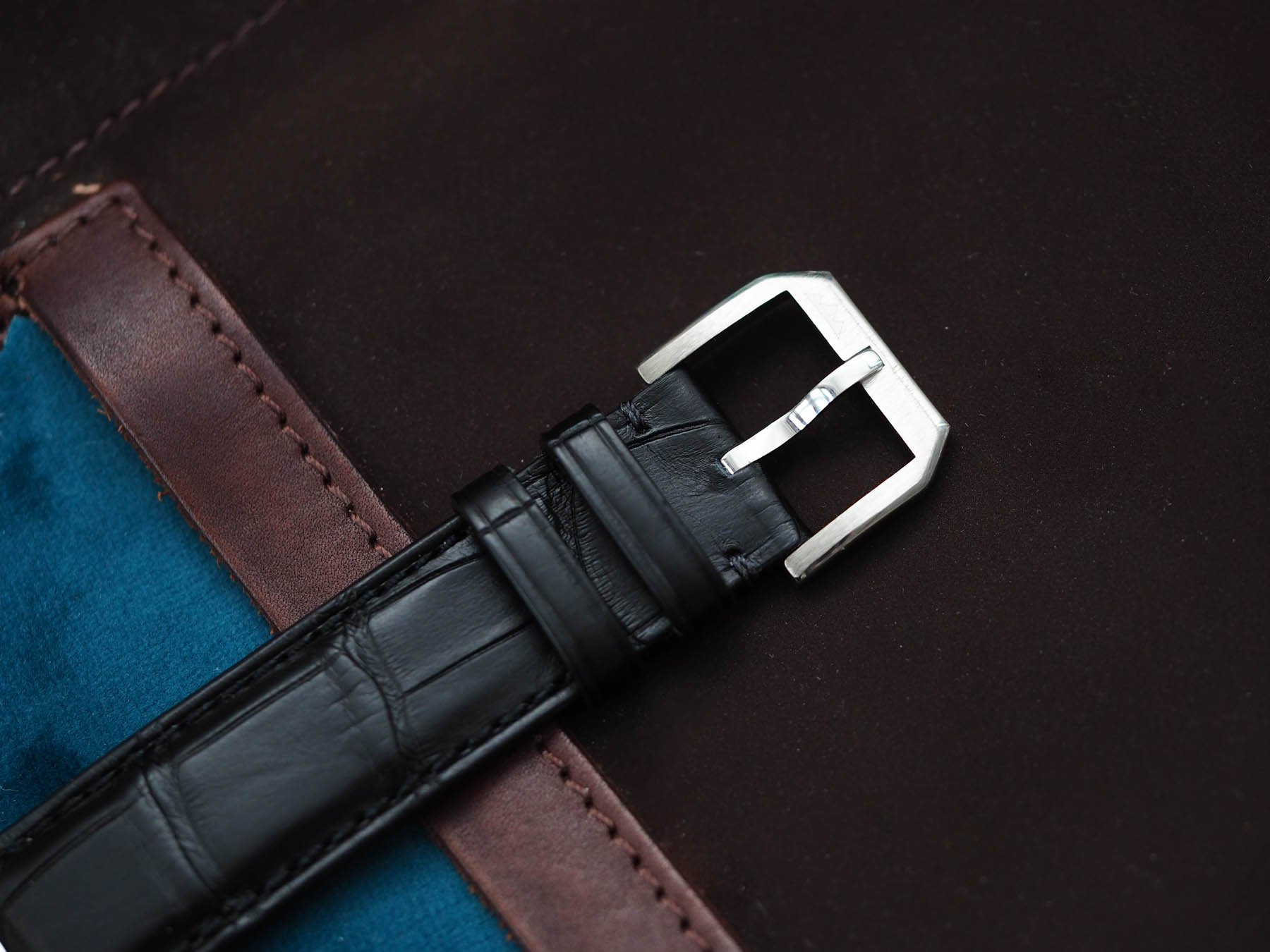 However — and I would like to shout this from the rooftops — Echo/Neutra has done something sneaky cleaver here that I didn’t appreciate until I came to flip this bad boy onto the supplied tropic strap: these buckles are not just different styles; they are different diameters. This is, in a word, genius. I love aftermarket straps; I hate unbranded buckles. I have honestly never known a brand to include two buckles (an 18mm and 16mm) to accommodate for different tapers. It is intensely satisfying and had me whooping with joy when I realized. Smart move. 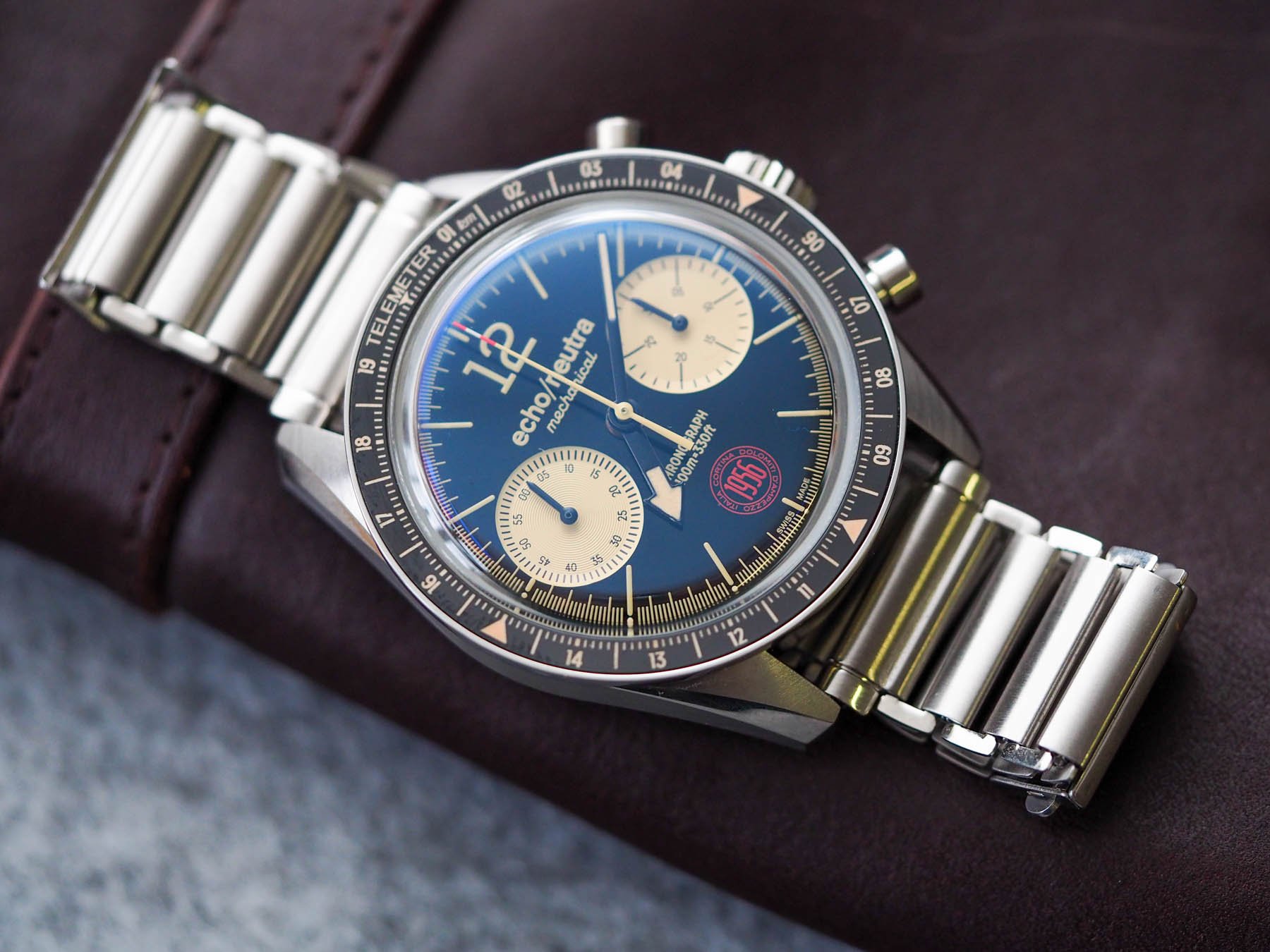 The dial colors and markings

Let me start with the colors: the colors are not as bright as they appear on the screen. They certainly appear redder on my laptop and phone than they do in real life. They are altogether cool in real life. The sub-dials and text are much more yellow (like really aged papyrus) than they are in any way salmony. The red, on the other hand, is not as vivid and actually looks better for it. I must say additionally that the dial balance is superb. The vertical harmony (thanks to that massive 12) is majestic. The long, thin hour markers elegantly draw the eye to the middle of the dial — a job well done. 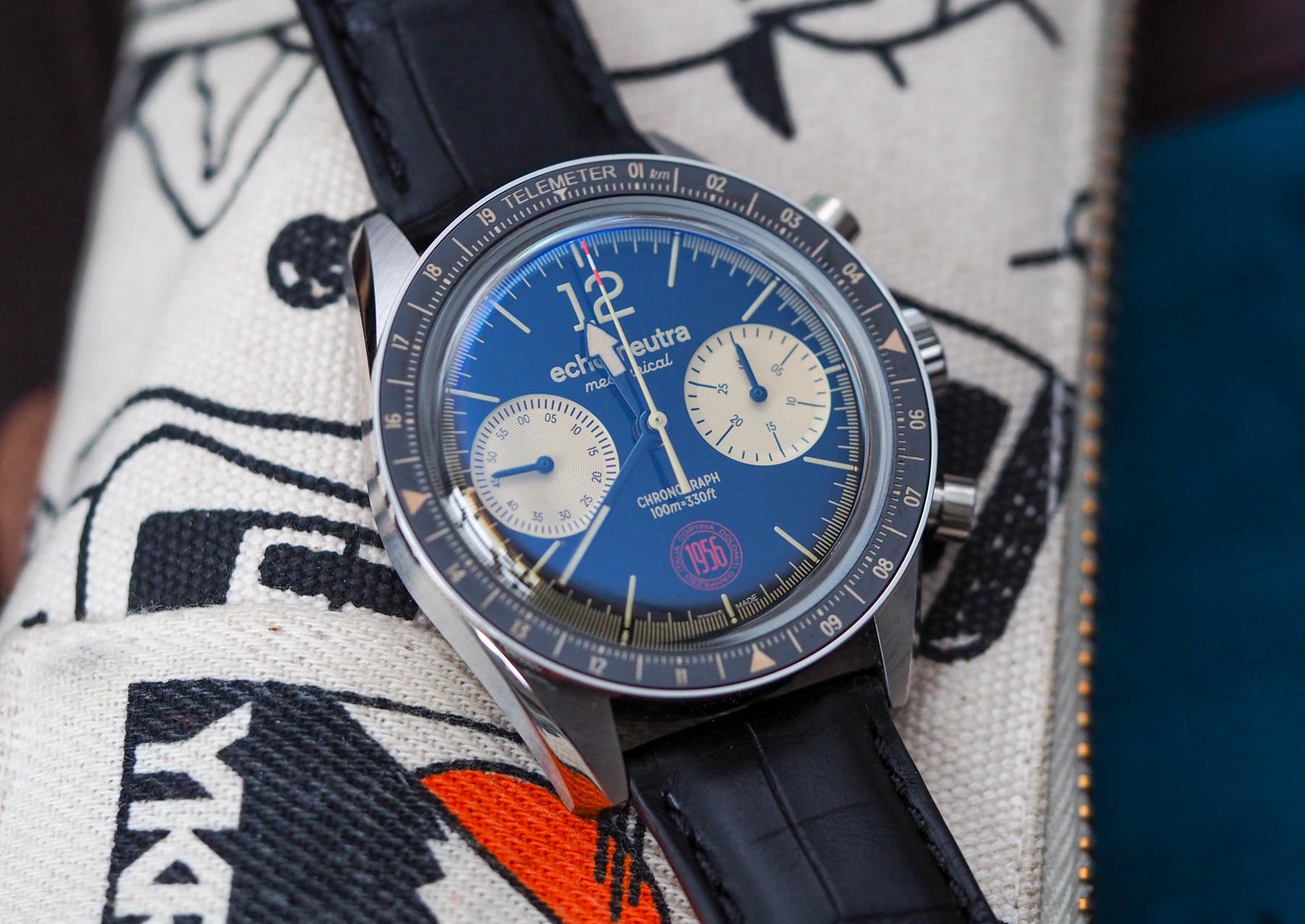 The hand length is much better here. Pleasingly, the minute and seconds hands touching the inner extremity of the split-seconds track. Therein lies my only slight bugbear with this design actually. The movement inside this beast is the Sellita SW510M BH b elaboré, which operates at 28,800vph or 4Hz. A 4 Hz operating speed equates to eight ticks per second. As such, it is always my preference that the markings on the dial reflect this. On the Cortina, the seconds markers are split into five sections, not four. Splitting a second five ways works for 5Hz movements such as the El Primero. Here it means the seconds hand doesn’t land exactly flush with the split-seconds markings.

Does it matter? No, you need a microscope to see what I’m talking about. Would it be remiss of me to not mention it? I believe so. I take all aspects of watch design very seriously and it would diminish my praise for this piece (which is massive) if I tried to sidestep the simple fact that I like these dial markings to make technical as well as aesthetical sense. 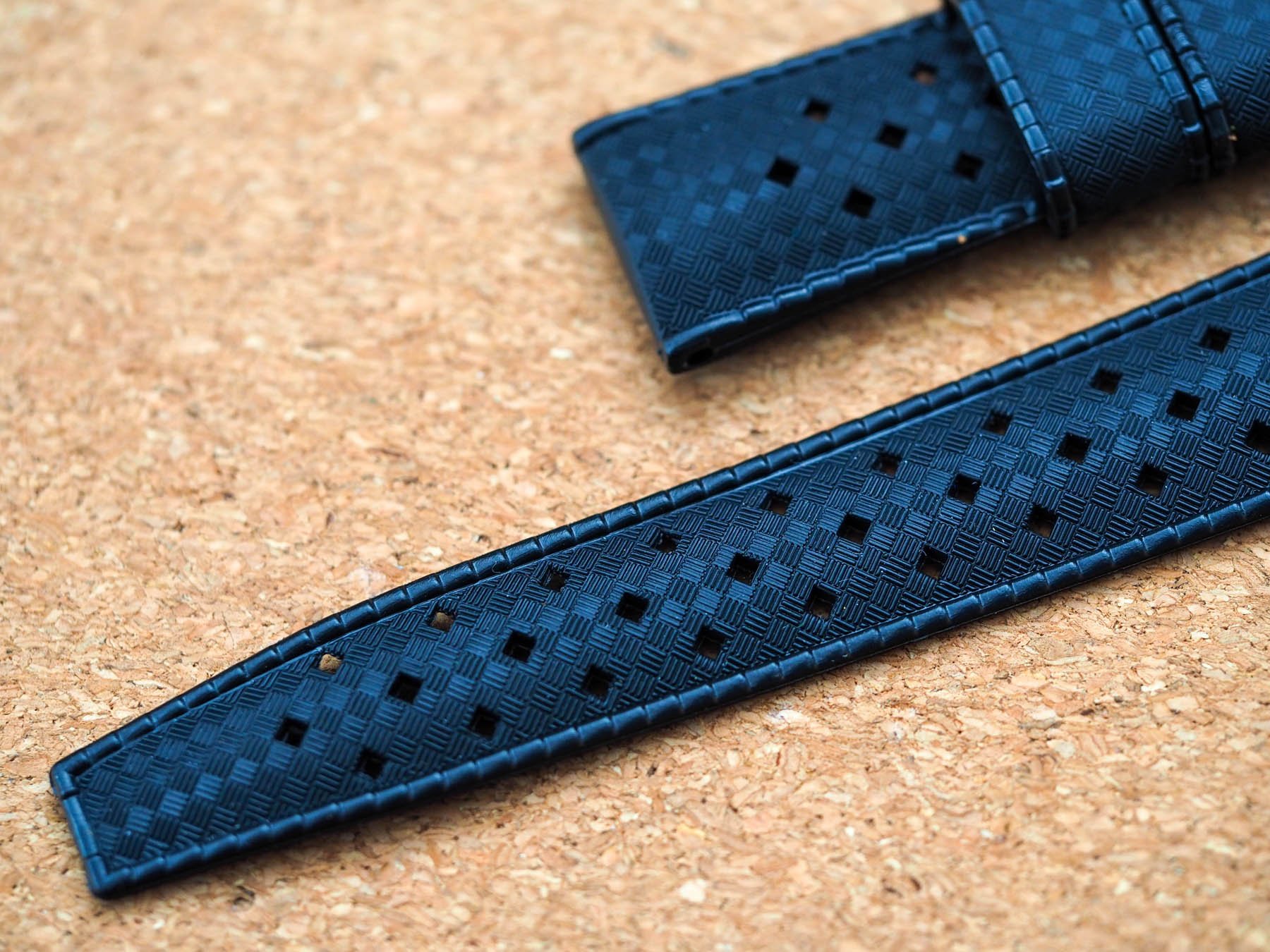 The Sellita SW510M BH b elaboré is expected to perform at +/-5 seconds per day. It has a max positional deviation of 20 seconds. The power reserve is 50 hours and you can fully wind this thing with approximately 35 turns of the crown. That’s right, this watch is manual. You could be forgiven for forgetting given its size thickness and its closed case back. 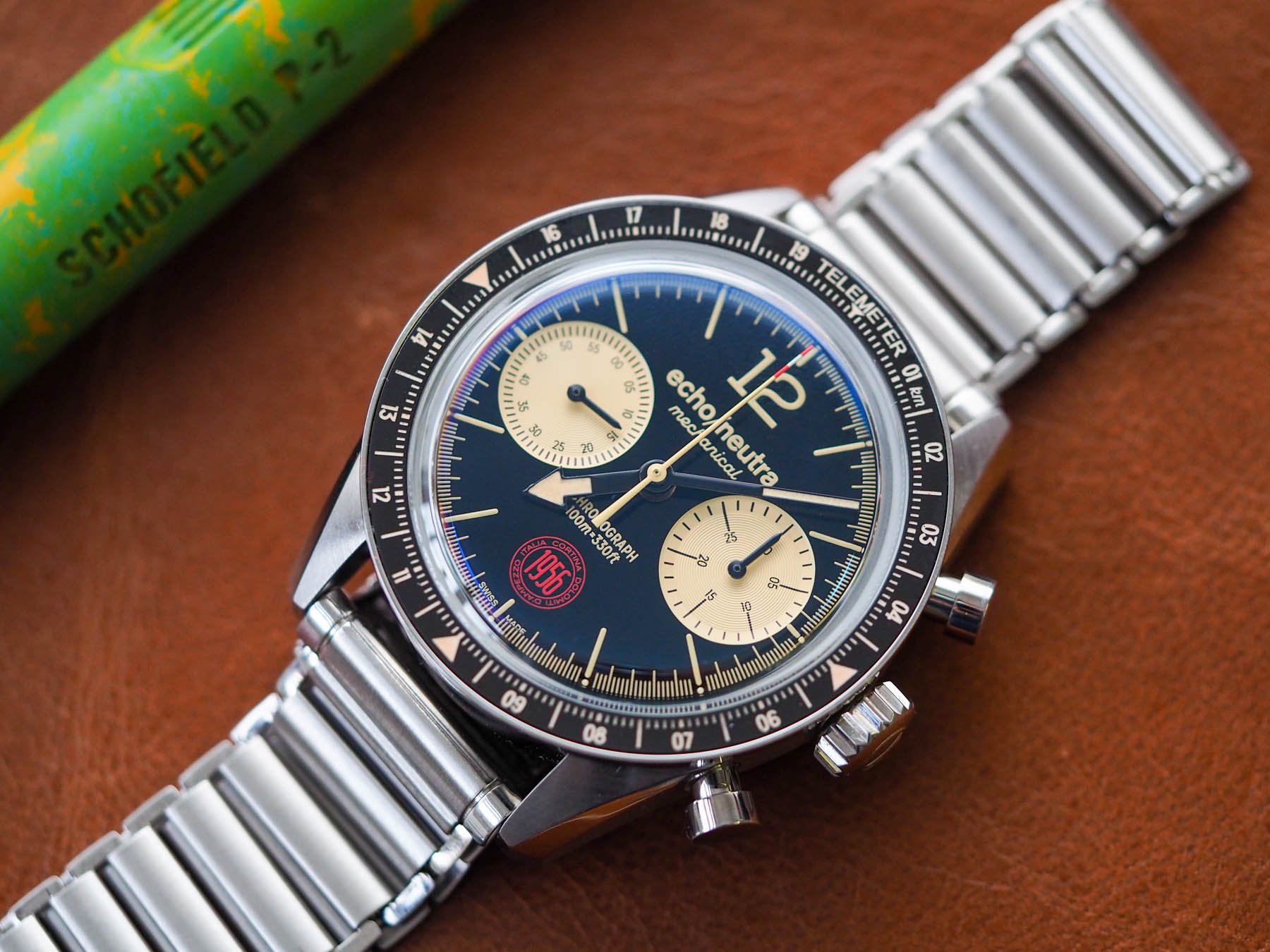 I do generally like a closed case back on the vast majority of Sellita-powered watches. That said, I’m really not tired of the Sellita SW510M BH b elaboré just yet. I find modern manual-wind chronographs fascinating and I wouldn’t have minded being able to see it. Does it bother me? Not too much, because I do like the simple, product-appropriate “1956” design on the back. Most importantly, however, it hasn’t been off my wrist often enough since I got it for it to make a shred of difference. I don’t normally rate watches out of ten but for €1,490, this is about as close to full marks as I’ve seen in 2021 so far. Check it out here.