Before I start with the Eterna Super KonTiki Chronograph review, a few words on the company first. Eterna has a long history that goes all the way back to 1856. However, it wasn’t called Eterna until 1905 (but Dr. Girard & Schild, after its founders). Before I jump to mentioning watches, Eterna is also known for ETA. ETA used to be their subsidiary company for creating movements for their own watches as well as for other brands. Best known is their Eterna-matic movement, which resulted in the Eterna logo with its five ball bearings. ETA became part of what we know today as Swatch Group. Eterna has been in different hands since 1982 (including Porsche Design) but since a couple of years it is owned by Citychamp Watch & Jewellery Group Limited.

The Eterna KonTiki watches are referring to the watches on the wrist Norwegian explorer and writer Thor Heyerdahl and his team during the Kon-Tiki expedition. Eterna didn’t use the name KonTiki (without the hyphen) until 1958. Since then, the KonTiki models have been in the Eterna collection. There was even a re-edition of the very first 1958 model, with the same style elements. This year, Eterna introduced a Super Kontiki Chronograph watch, the one we have here for you today. Powered by an in-house chronograph movement with column-wheel mechanism. Let’s have a look. 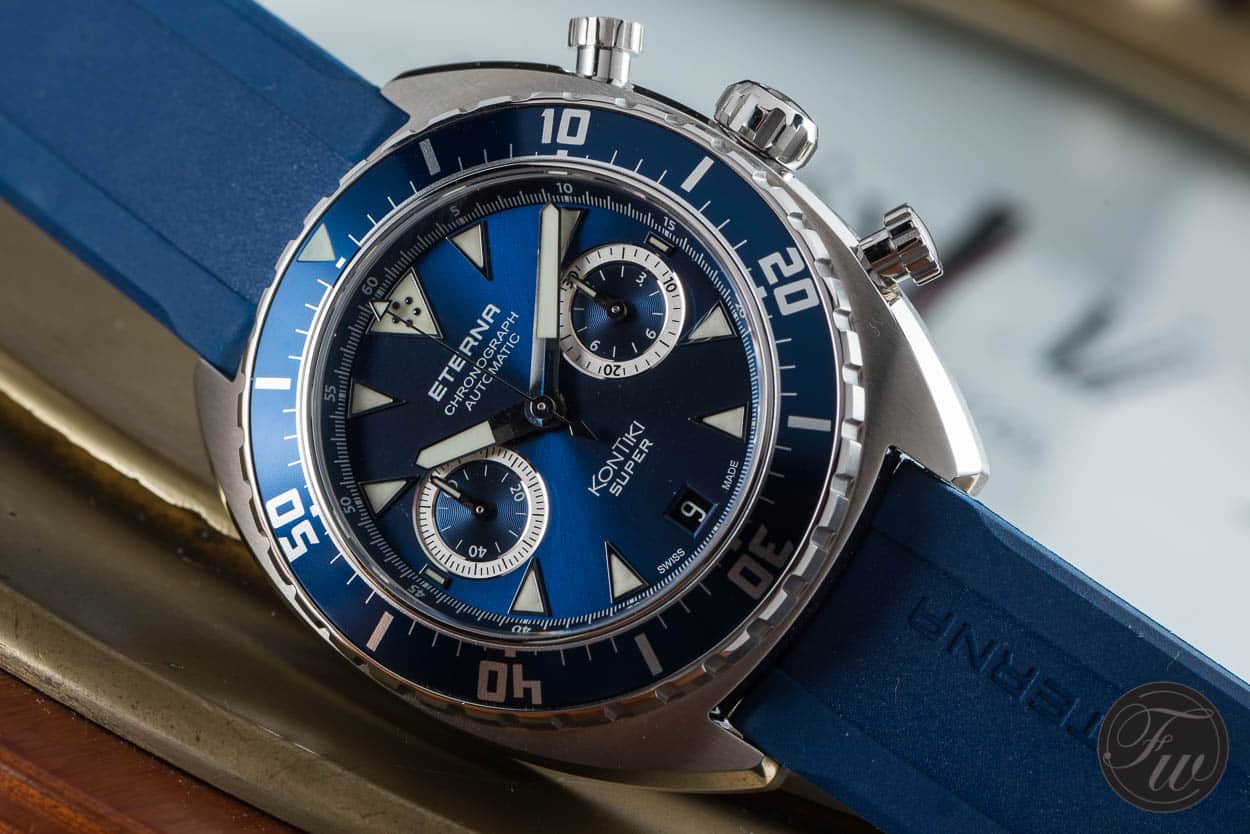 Let’s start with the biggest news. The Eterna caliber 3916A movement. A chronograph movement with column-wheel movement and flyback function. With the flyback chronograph, you can reset and restart the timing without having to interfere with an extra push on the start button. You just push the reset button and the chronograph will restart immediately.

The caliber 3916A movement ticks at 28,800 vph and has a 60 hour power reserve. Eterna made sure to make the movement attractive for the eyes as well, with its rhodium finish, blued screws and microblasting decoration on the rotor. As you can see, the Eterna caliber 3916A movement can be admired via the sapphire caseback. 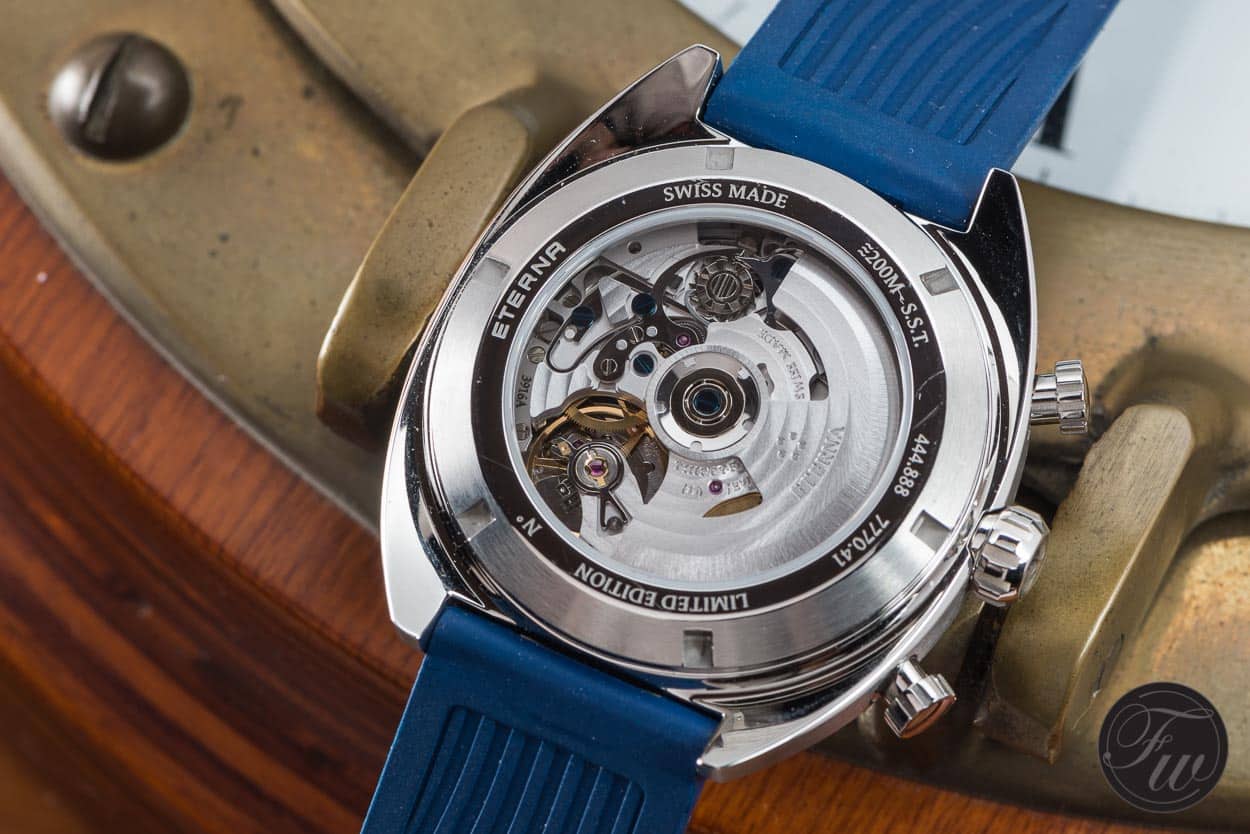 The watch with its 1970s look & feel sits nicely on the wrist. I have fairly large wrists, but was surprised to learn that the Eterna Super KonTiki Chronograph measures 45mm in diameter. It wears much smaller, perhaps due to the shape of the case. The watch is thick though, with a height of 16.05mm. This is what I’ve come across with a lot of recent chronographs with in-house manufactured movements though. Last week I reported on the new Seamaster Planet Ocean 600M titanium models, and the chronograph model is quite thick as well. 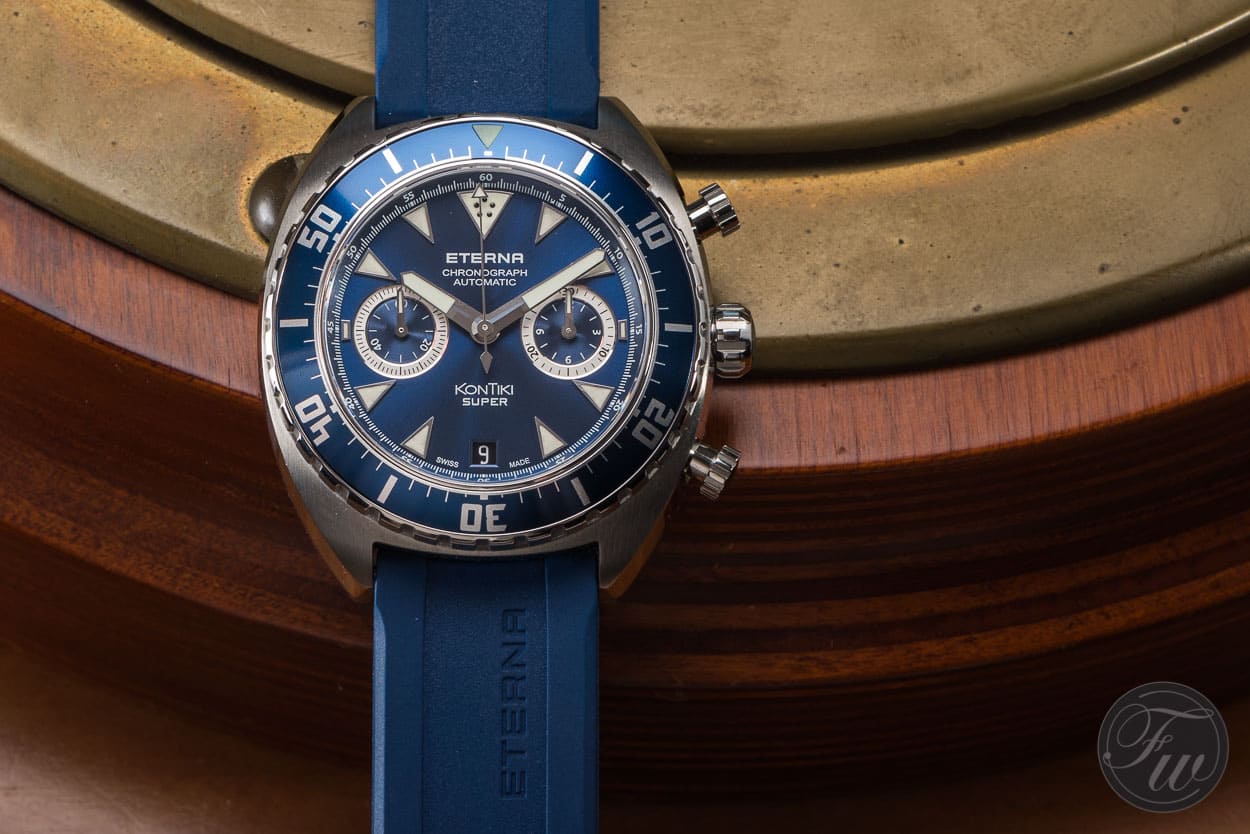 As you can see on the picture below, the pushers aren’t screw-down and the winding/setting crown has the 5 ball bearing Eterna logo. The watch is water resistant up to 20Bar (~200 meters). Now, someone made a comment on our Instagram account on this watch (we already published a wrist shot of this watch there) that a diver’s chronograph with no screw-down pushers is a bit odd. I agree, although the Seamaster 300M Chronograph also doesn’t have screw-down pushers (and can be operated under water). The winding and setting crown is screw-down, of course.

However, they did have some system in place to keep the watch water resistant under water when the pushers are used. With the Eterna Super KonTiki Chronograph it does not seem to be the case. So I assume that you better not use the pushers under water with this watch. And why would you, as it is probably difficult enough to read those sub registers already without good sight. 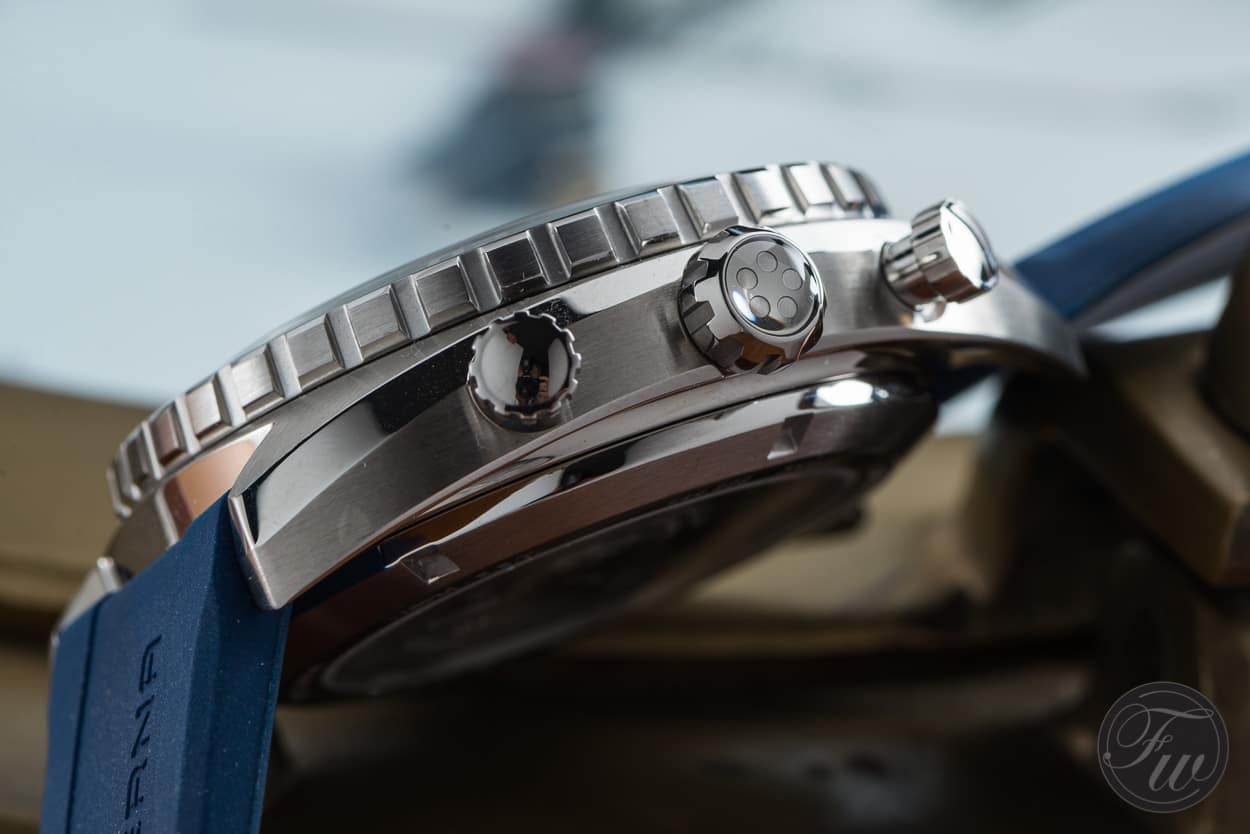 I like the sunburst dial on this blue version of the Eterna Super KonTiki Chronograph. The black version has a matte dial, which is perhaps a bit more ‘tool-watch’ proof. However, this watch is a great piece to wear on land as well, during Summer. So the sunburst will give that nice effect on the dial. The triangular hour markers are filled with Super-LumiNova and perform very well. All hands, including those on the sub dials are lumed up.

On 6 o’clock, you’ll find the date aperture. The Eterna logo with the five ball bearings is located on the 12 o’clock hour marker. All hands are long enough to be able to perfectly read the time. 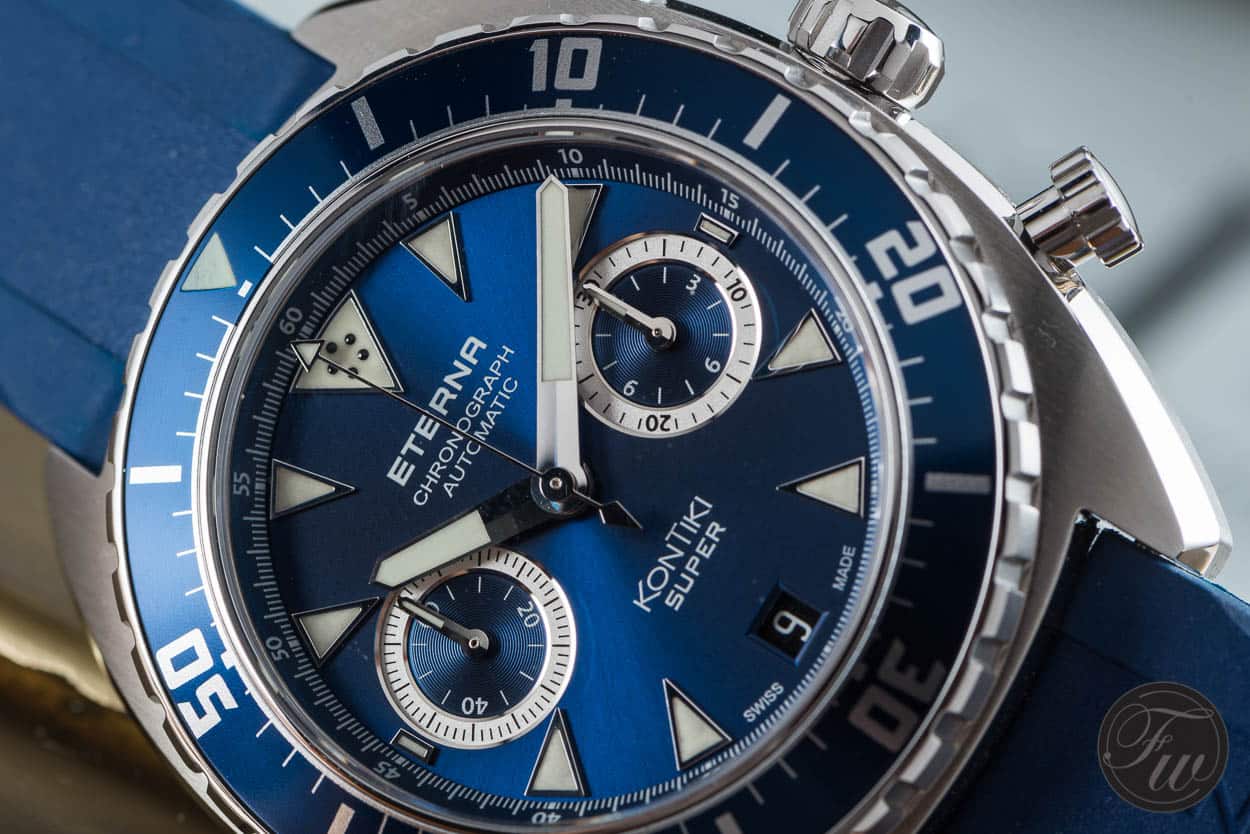 As written above, the case of the Eterna Super KonTiki measured 45mm x 16.05mm. That is relatively big, but somehow it wears smaller and is actually quite comfortable on the wrist. As you can see, I have the rubber strap version (there is also a Milanese bracelet as an option) and that helps making it comfortable. It perfectly goes around the wrist and the watch sits tight.

The case has this typical 1970s cushion shape which I really like. In length, the watch measures 50mm due to the long lugs. The case is nicely finished. Brushed parts as well as polished thick facets. The uni-directional 60 minute scale bezel has this big relief squares on the side for an easy grip. The case band has a satin brush finish as well. The caseback bezel has a satin brush finish on the bottom and a polished side. This screw-down caseback has a sapphire crystal, as shown on earlier pictures. 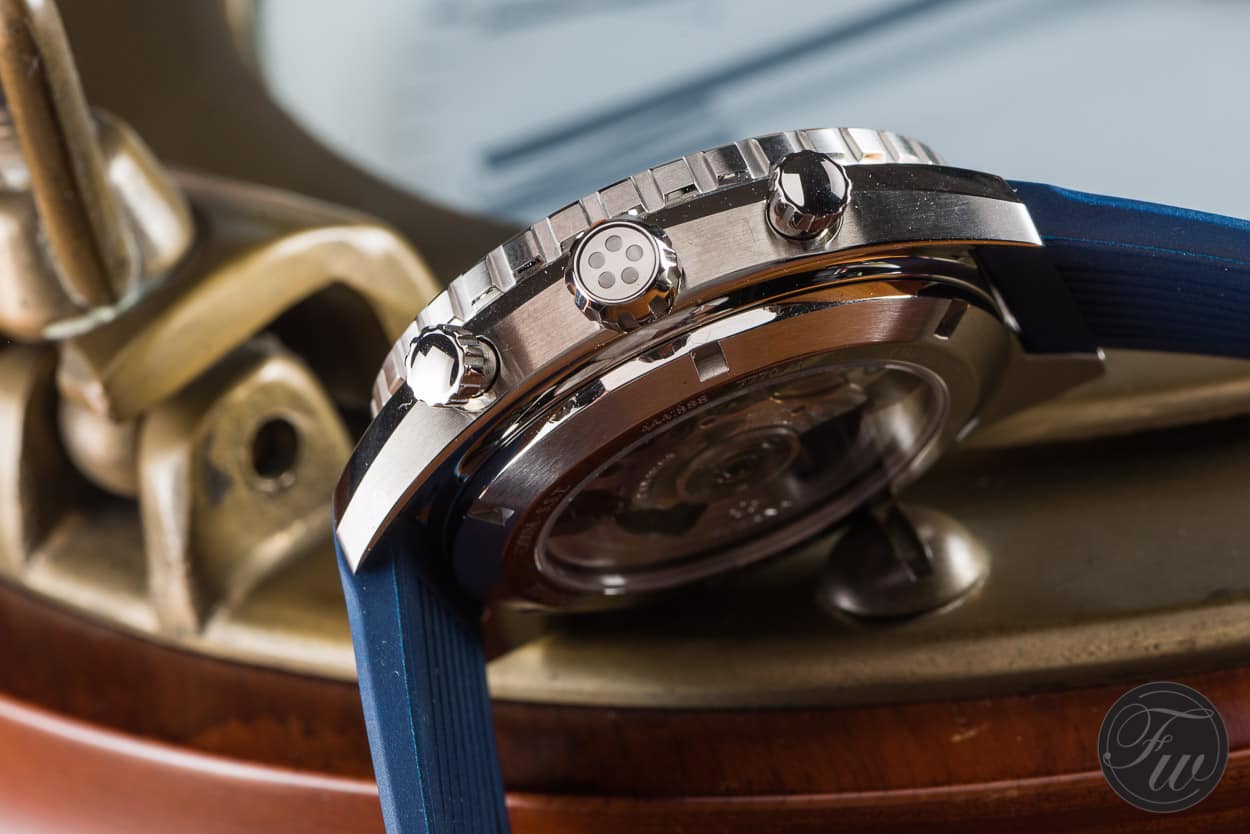 The blue rubber strap is nice and comfortable. On the inside it has these tracks and on the outside it has ‘Eterna’ in it. The brushed buckle has the Eterna logo again and has polished bevels. It all feels high quality. The strap doesn’t need any cutting to be fit (like many rubber bracelets with folding clasps do). I dislike doing that, as this can go wrong quite easily and it also feels very definitive. Not the case with Eterna’s rubber strap though.

The Eterna Super KonTiki Chronograph is also available with a Milanese bracelet. I haven’t seen this one in the flesh, or tried it. It does give the watch that 1970s look and feel, but it might be the case that the whole package will be quite heavy in the end. However, I can’t be sure on this without having tried it in person. 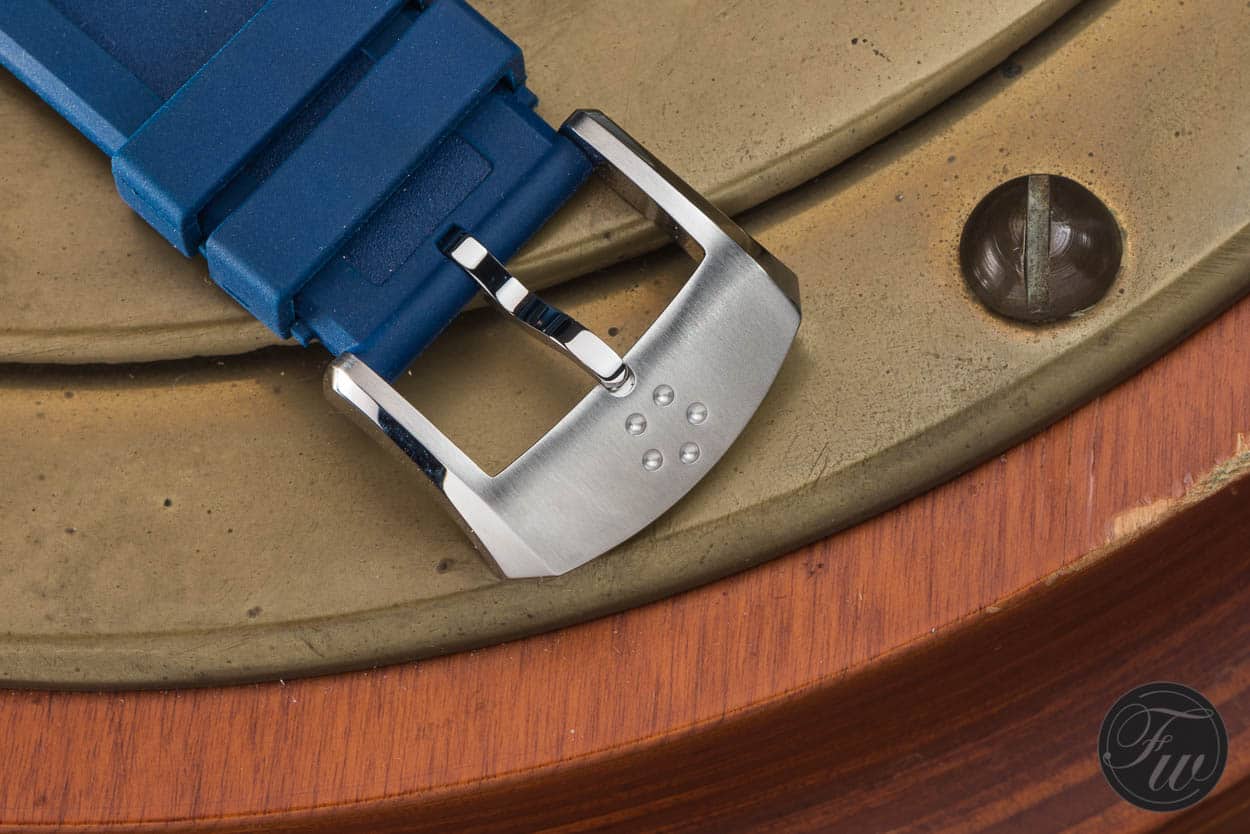 I received a prototype watch, but as you can see, the caseback reads Limited Edition. But on the official Eterna website, you can’t find this watch under the regular collection overview. It is under Special Editions. But in any case, it is not limited. It will be in the regular collection and production. I happen to find the website and the press release a tad bit ‘unclear’ when it comes to product overviews. Something Eterna needs to put a bit more focus on. According to the Eterna press material, the rubber bracelet versions are more expensive than the milanese bracelet versions. That would really surprise me to be honest.

Note: Eterna let us know that this model was initially meant to be a limited edition. Upon further analysis they decided to not to release it as such. It is now a special edition and not limited.

That has nothing to do with the watch itself however. But I do wonder what final production versions will have engraved on the caseback. For the rest, all necessary information has been engraved in the bezel of the caseback. 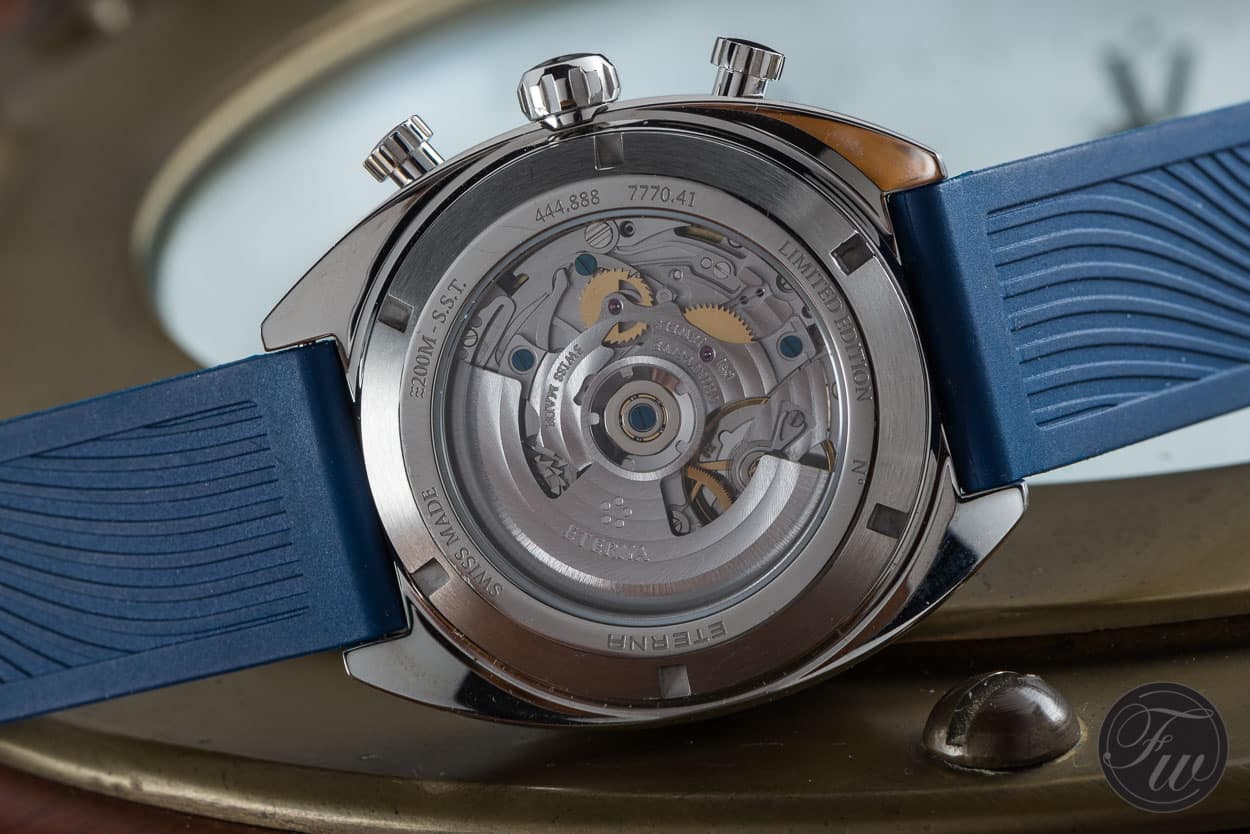 Official Pricing and Some Thoughts

To be brutally honest, it is for the first time in a long time, that I’ve looked at an Eterna in person again and I am very positively surprised. 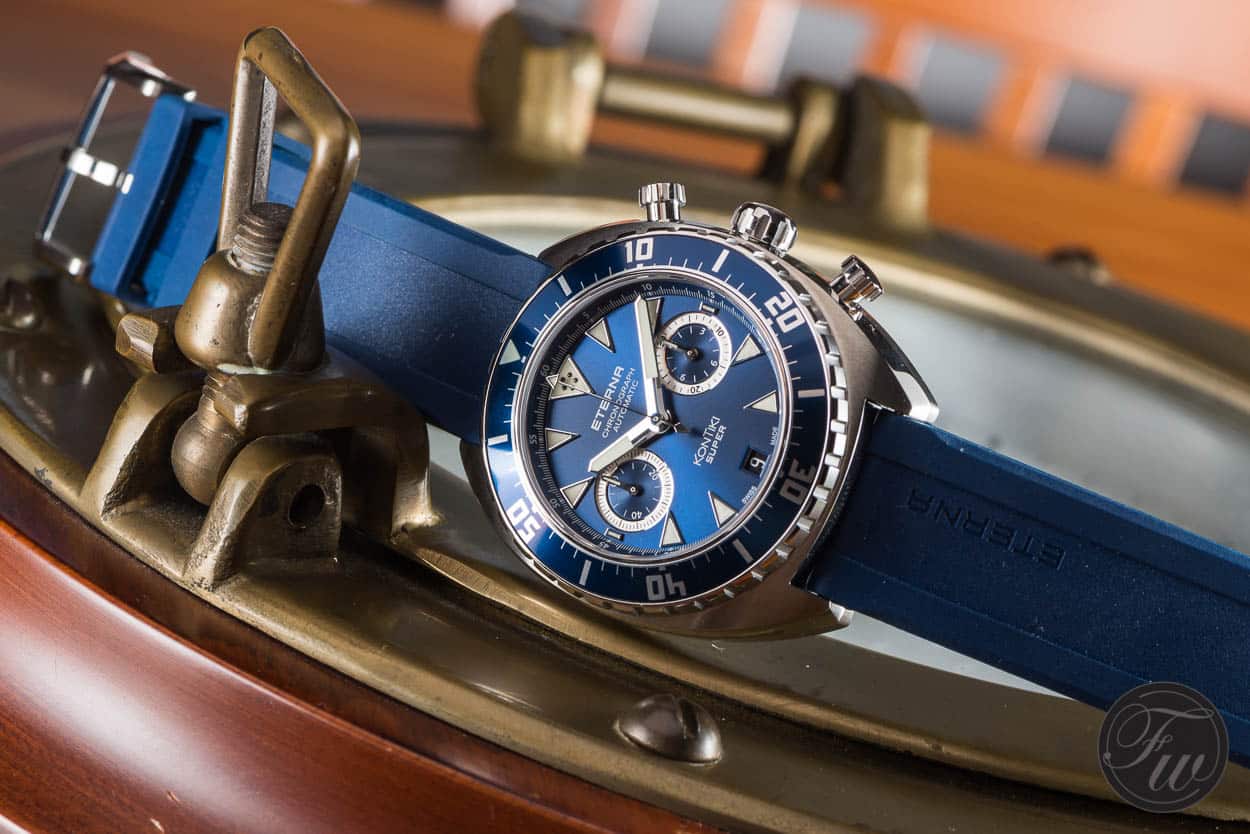 This watch has a lot of ingredients for success. The in-house manufactured movement with column-wheel mechanism and two register lay-out is one of them. There are not many in-house manufactured chronographs out there that offer something for similar price point in this style and quality. Only if you are willing to think beyond the usual suspects you will find interesting watches in this price range, some times even cheaper. The design of the watch is 1970’s on the one hand, but very timeless on the other. I would be surprised if this goes out of style in, let’s say, the next 10 years.  Also important, the watch feels good on the wrists and operates very nicely. Easy to set the time, use the chrono etc.

Out of the Box

The price is definitely interesting. If you look at the usual suspect brands with similar specifications, it is all closer to 10K than to 5K. It can be very worthwhile for you to have a look at this Eterna Super KonTiki Chronograph if you want to own something good and iconic, for a reasonable price.