Bob is offering his Speedmaster Professional 105.012-65 blue dial on eBay and the current bid is already on $7,400.- USD. Why is this watch so special? There is not much to explain about these watches to be honest. These blue dial Omega Speedmaster watches were delivered from the factory this way, not because of a hard life in the burning sun or something. They were produced in this nice blue color that also seem to have a trace of grey in there. The production numbers are unknown (as with most Speedmaster watches) but it is very rare. From what I’ve understood, there was also a (much rarer) original grey dial Speedmaster Pro from that time, but I’ve never seen one in the flesh. 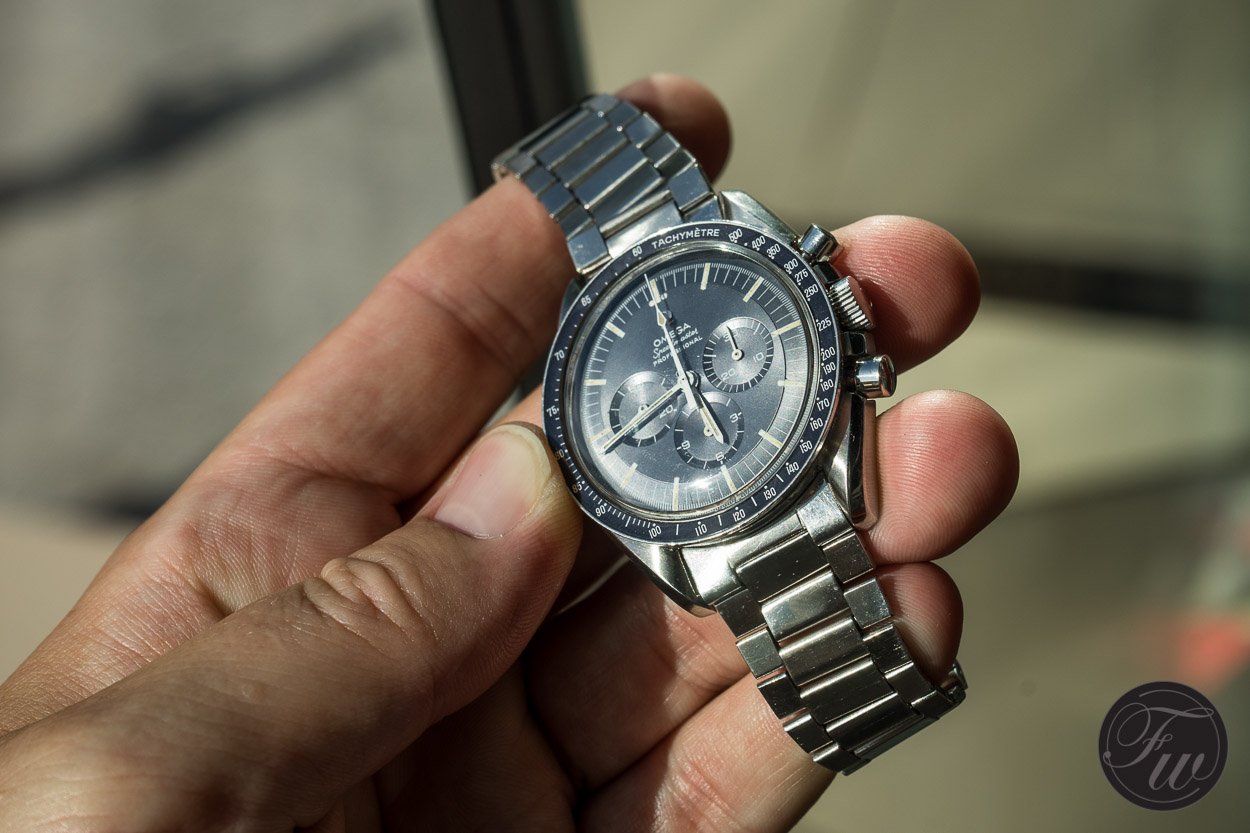 Omega Speedmaster Pro with blue dial from one of our Speedmaster GTG guests in Düsseldorf last year.

The fact that these watches are undocumented by Omega (as far as I know) makes it a bit difficult to say something about its rarity or production numbers. However, from a collector’s market perspective, you only come across these Speedmaster Professional 105.012-65 blue dial watches (or later reference) once in a while.

As you can see below, on the picture of his Speedmaster Professional 105.012-65 blue dial, the bezel is also a bit faded. The blue dial has a gloss finish and you can clearly see the ‘step’. 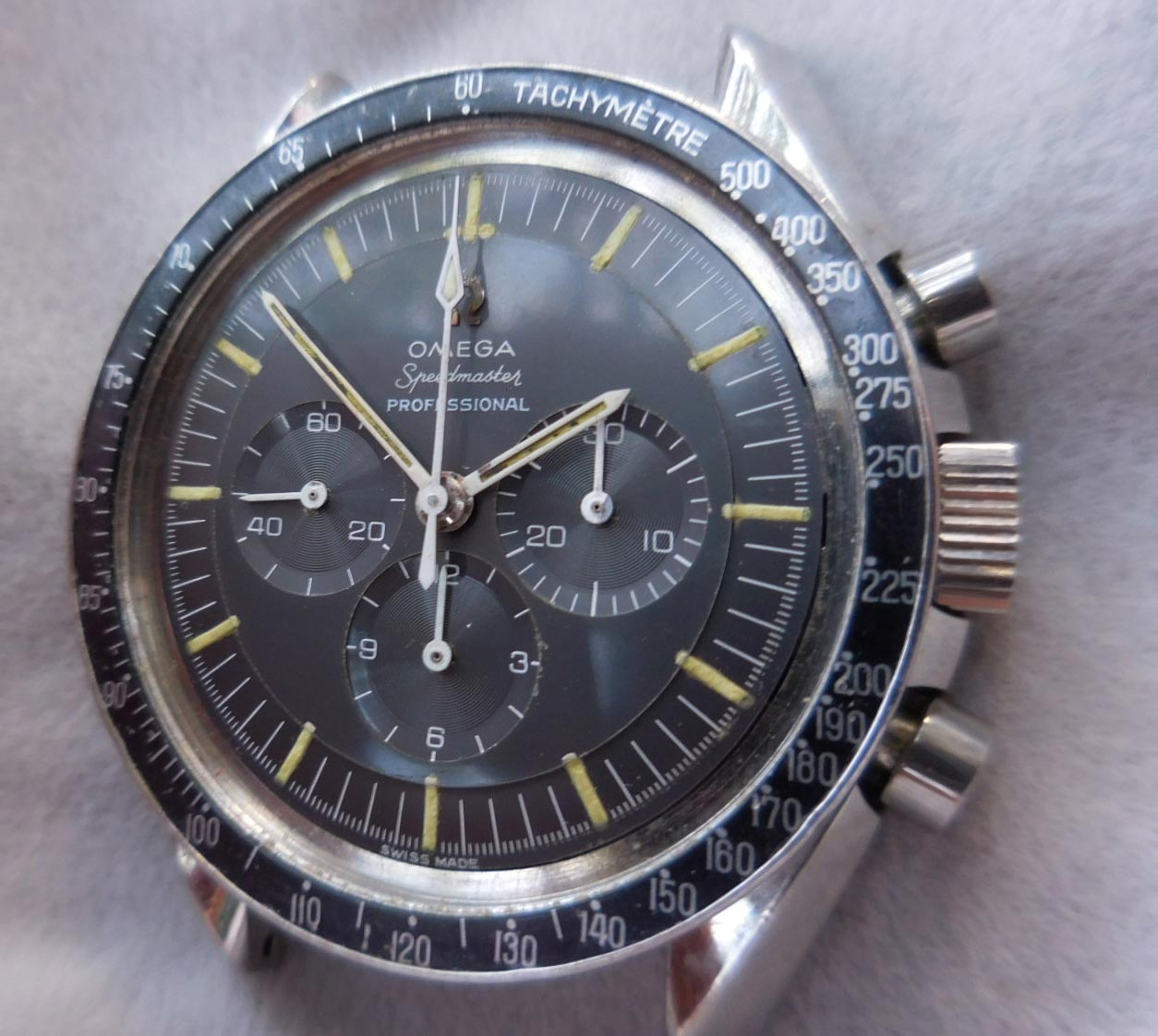 The watch appears to be a bit dirty, but that’s personally how I like them best. It shows the watch has not been polished, cleaned or tempered with.

Now for the concerns, which is important for the collectors of these type of watches, there are a couple you have to deal with (or not). The hands, especially the chronograph hands, look like they have been replaced at some point, as they differ quite a bit from the hour and minute hands. Nothing to worry about it my book, as it was probably done in an early stage as they are tritium hands and have a bit of wear and damage as well. These are not the Super LumiNova replacements or even 1980’s replacement hands I think. The blue glossy dial has no T’s before and after the ‘Swiss Made’ printing. As you can see in the first picture we showed you, of the 145.012 watch from the museum, there are clearly T’s on there. For a regular 105.012-65 dial, there should be T’s, some 105.012-63’s came without T’s. Although this might have been a service dial (no T’s most of the time), it would strike me as odd that Omega delivered this rare blue gloss dial as a service dial for a 1967 watch. This is why it is quite difficult to do any proper assumptions here, as there is no official documentation on this type of dial. The only thing known is that they left the factory like this, it is not a dial like the chocolate brown ones on the 145.022 for example. So whether they left the factory with both T’s on and off the dial, is unknown. If might be wise for the buyer to inquire this at Omega in Bienne.

The reference 1039 bracelet with 516 end-links is correct for this reference, although the clasp is marked ’71’. 1971 was the last year that Omega produced and delivered watches with these 1039 reference bracelets. Either the clasp has been replaced, or the entire watch was serviced in those days (getting a new set of chronograph hands?) and received this – then – new bracelet. Who knows. 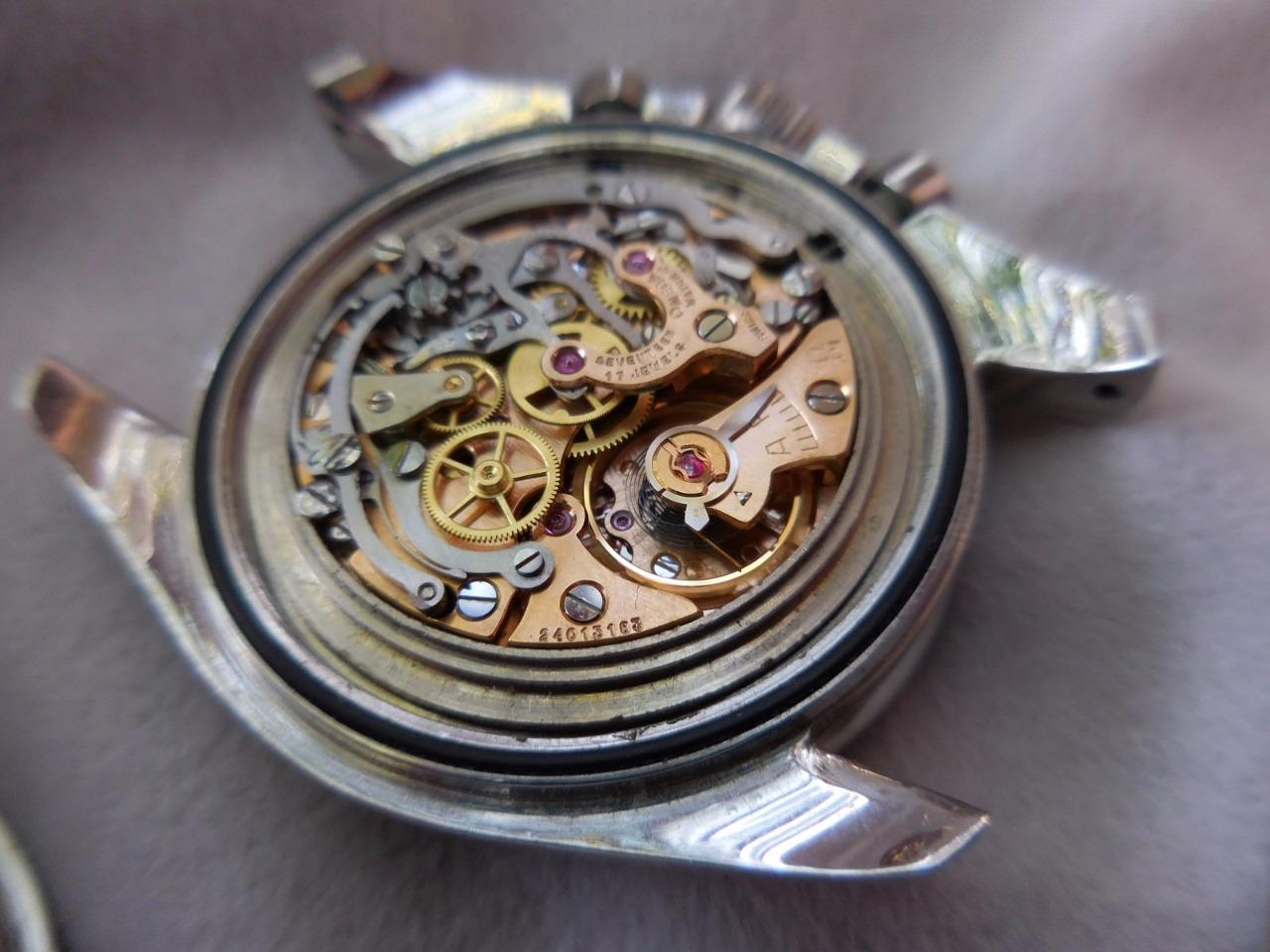 You might not get all the answers on these questions and concerns, but that – to me – is also part of the fun in collecting Speedmaster watches. Some pieces will always remain to be a bit mysterious, but that probably will not affect the value and belief that this is actually a very rare piece.

You can find the Speedmaster Professional 105.012-65 blue dial for auction here.