In this installment we ask a collector to tell us a bit about his Speedmaster watches. He showed us a few pictures in a short conversation on one of the social media channels, and we thought it might be a nice idea to share his story with you.

FW: Clément, please tell us a bit who you are.

C: My name is Clément, I am 28 years old. I am a collector of design and vintage watches since about ten year, and I decided to make it my job three years ago after my law studies (amongst others, I work for vintage dealers like Joseph Bonnie). I travel the world to find the best pieces. I love the quote of Charles Eames : « Take your pleasure seriously ». This decision was daring at first, but I do not regret it because I am a collector and it is all about passion. As such, I always been a reader of www.fratellowatches.com, and it is an honor to be published.

FW: Please tell us a bit about your Speedmaster watches.

My first watch was a Omega with a bumper automatic movement, which belonged to my grandfather. Then, I have two Speedmasters. The Speedmaster reference 105.003-65 and a 145.022-69 with a tropic dial (read our in-depth article on Speedmasters with tropical dials here). The reason why I love Speedmaster so much is the fact that this model is such a cool theme for collecting watches. Every model is specific, you can go wild for quite a bit. Finally, the Speedmaster is just historic. When I wear my pre-Moon, it just feels sensational by the fact alone that this watch was part of the space program. Like a kid with huge imagination, I picture myself taking part in the conquest of space in the 1960s. 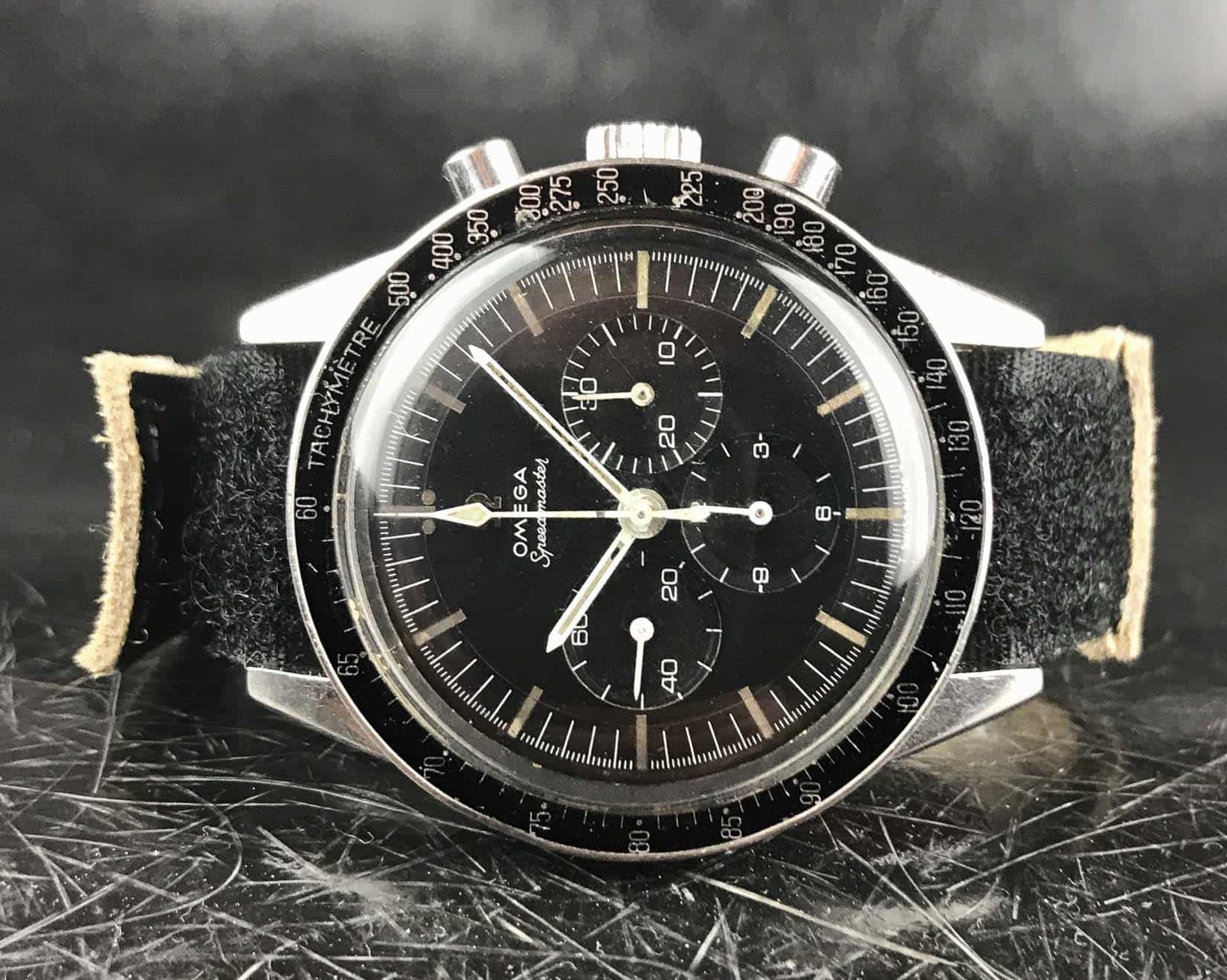 FW: What is the story with your Speedmaster reference 105.003-65? You have the box and papers with that one, which is quite rare.

Sure. First of all, I love the 105.003 reference. It is a watch with perfect proportions. I particularly like the straight lugs case, and its 39mm diameter.

The Speedmaster 105.003 is exactly the reference that I prefer in the Speedmaster collection. My first Speedmaster was actually a 105.003 too. But at some point I bought the current 105.003 that I have and sold the first one. 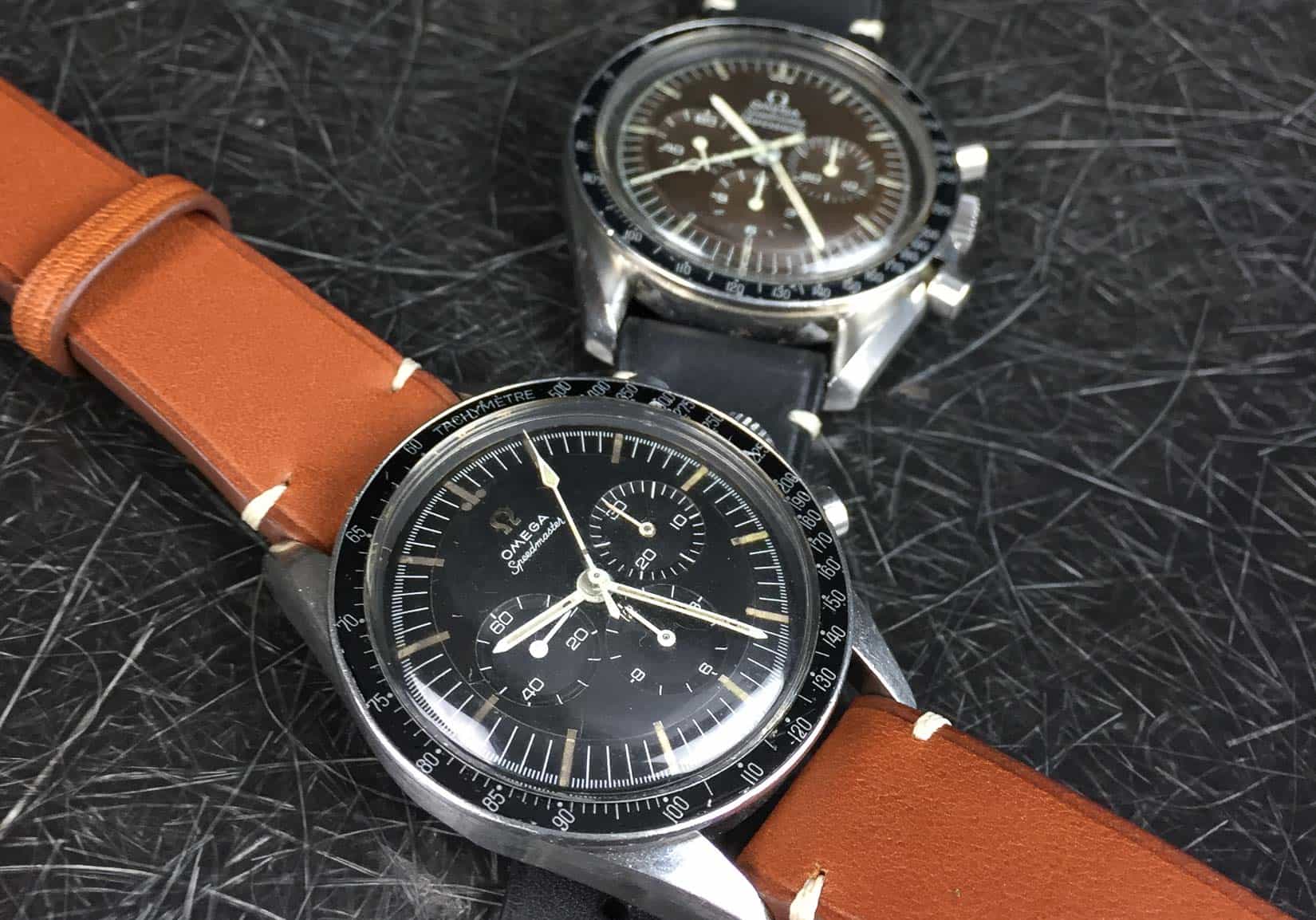 During a trip, I found another Speedmaster reference 105.003. This particular watch had a perfect dot-over-90 (DON) bezel, but also a reference 7912/6 bracelet. I bought this watch from the first owner. He gave me an Omega box with it, but I actually doubted the authenticity a bit. It was probably original, but not to this watch. However, to my big surprise, I discovered that there were papers in this box with the serial number corresponding to the watch. I decided to keep this particular watch and sold my first 105.003 to a friend who was fancying it. 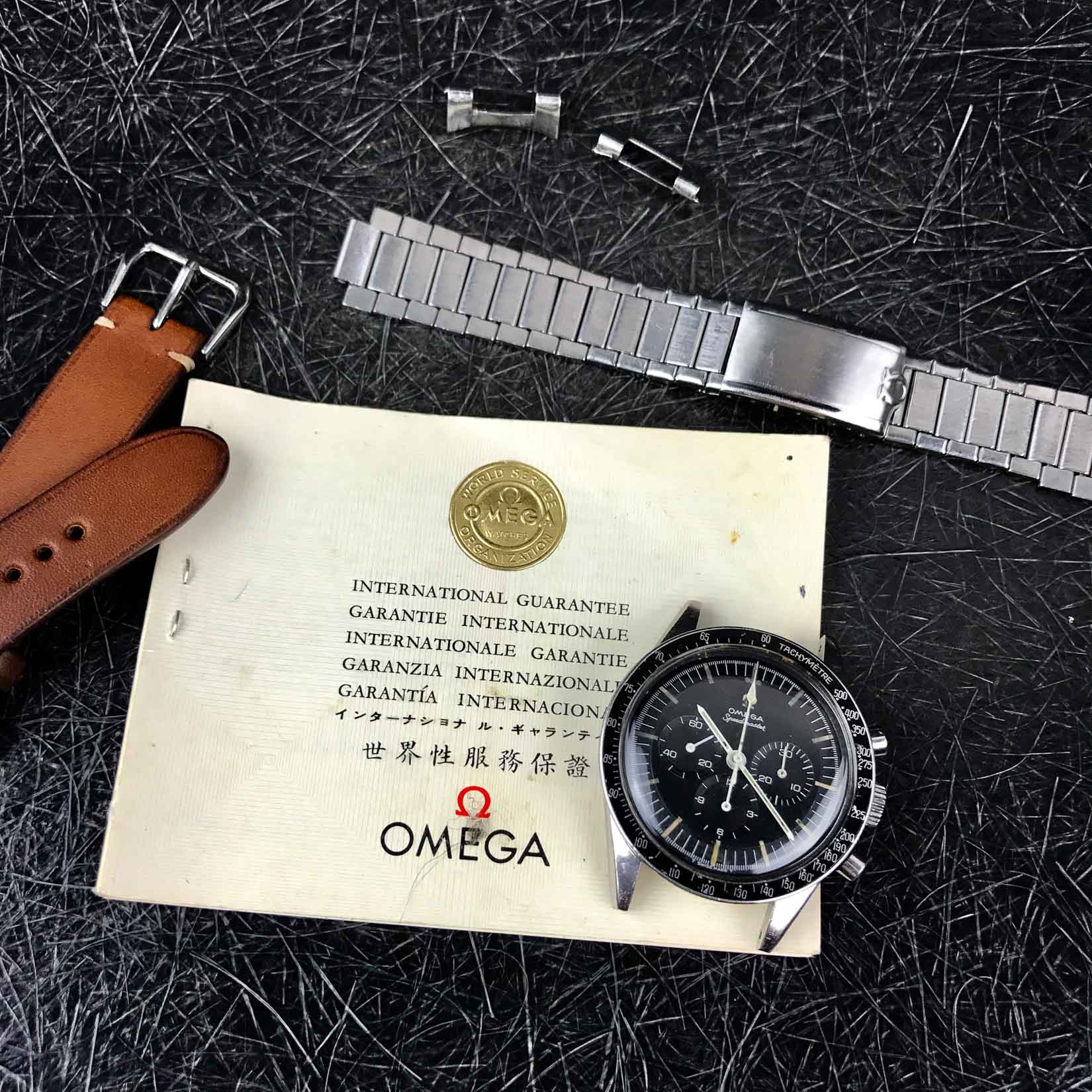 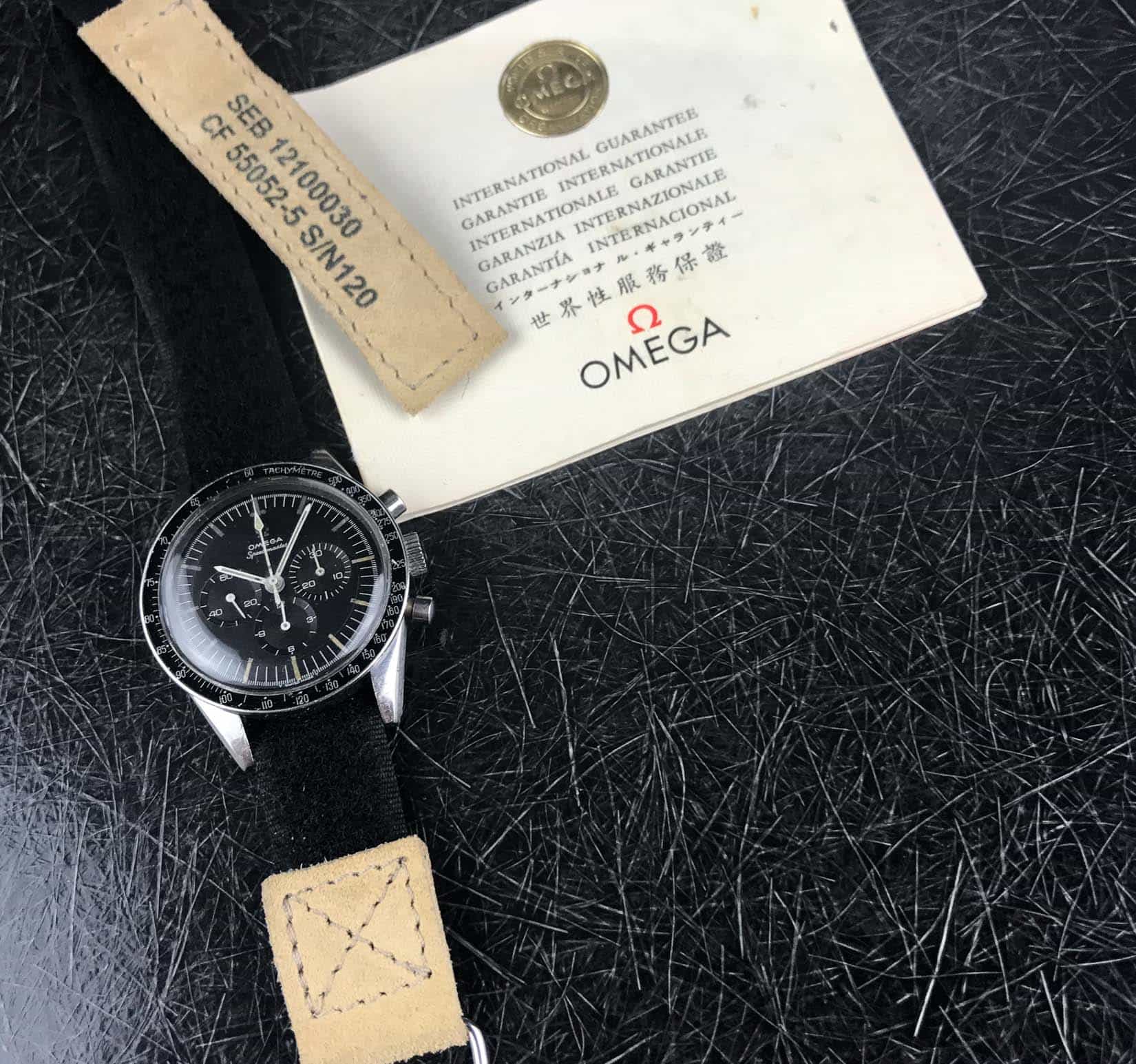 I love to wear this watch on the NASA Velcro by StrapsByFleur. I discovered it thank to your website, so thank you very much!  Quality and design are great and the price is very fair.

This is perhaps a less exciting story, but still a nice watch. This Speedmaster I’ve found on eBay actually. It has this beautiful tropic dial as you can see on the images. Momentarily it is at my watchmaker for a few things. However, I am keeping this in my collection as well. It is such a lovely watch to wear. 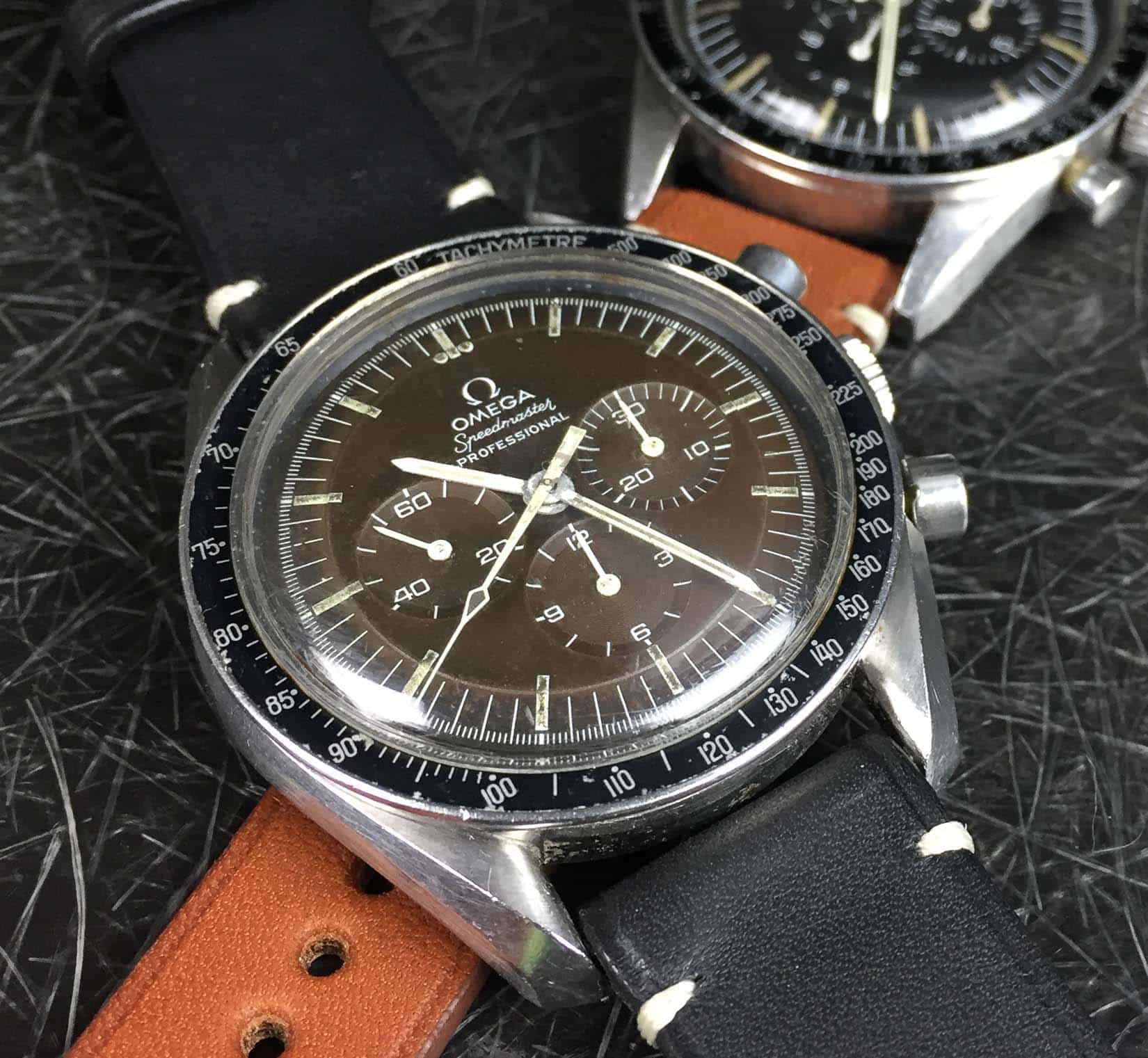 My goal is to build a nice collection of Speedmasters, including a nice condition 105.012CB. I would also love to own an Ultraman at some point.

FW: Thanks for your time. Let us know when you’ve found that Ultraman and we would be happy to have you back again to talk about it.