I never really wanted an Apple Watch. I bought one recently for professional reasons (as in, I didn’t think it was credible to rail against something I didn’t understand, so I picked one up to see if I could learn what all the fuss was about). My girlfriend hated it immediately. She hated the way I was even more connected to work. The constant buzzing of my phone had already been an issue before, and now, this watch made it all the worse. She saw it as blasphemy. Prior to my experiment, my wrist had been holy ground. It was a special place for special things. The Apple Watch is not special enough by itself. However, when enrobed in a Golden Concept case designed in Sweden, it just might be…

Golden Concept is a young company from the blue-and-yellow portion of Scandinavia. Its goal is to dress up your Apple Watch so it looks every bit as luxurious as the luxury watch you’ve chosen not to wear in favor of it. The brand approached me to trial one of its new products, and I was intrigued. Mostly, I was curious to see how well the external housing interfaced with the Apple Watch’s functionality. 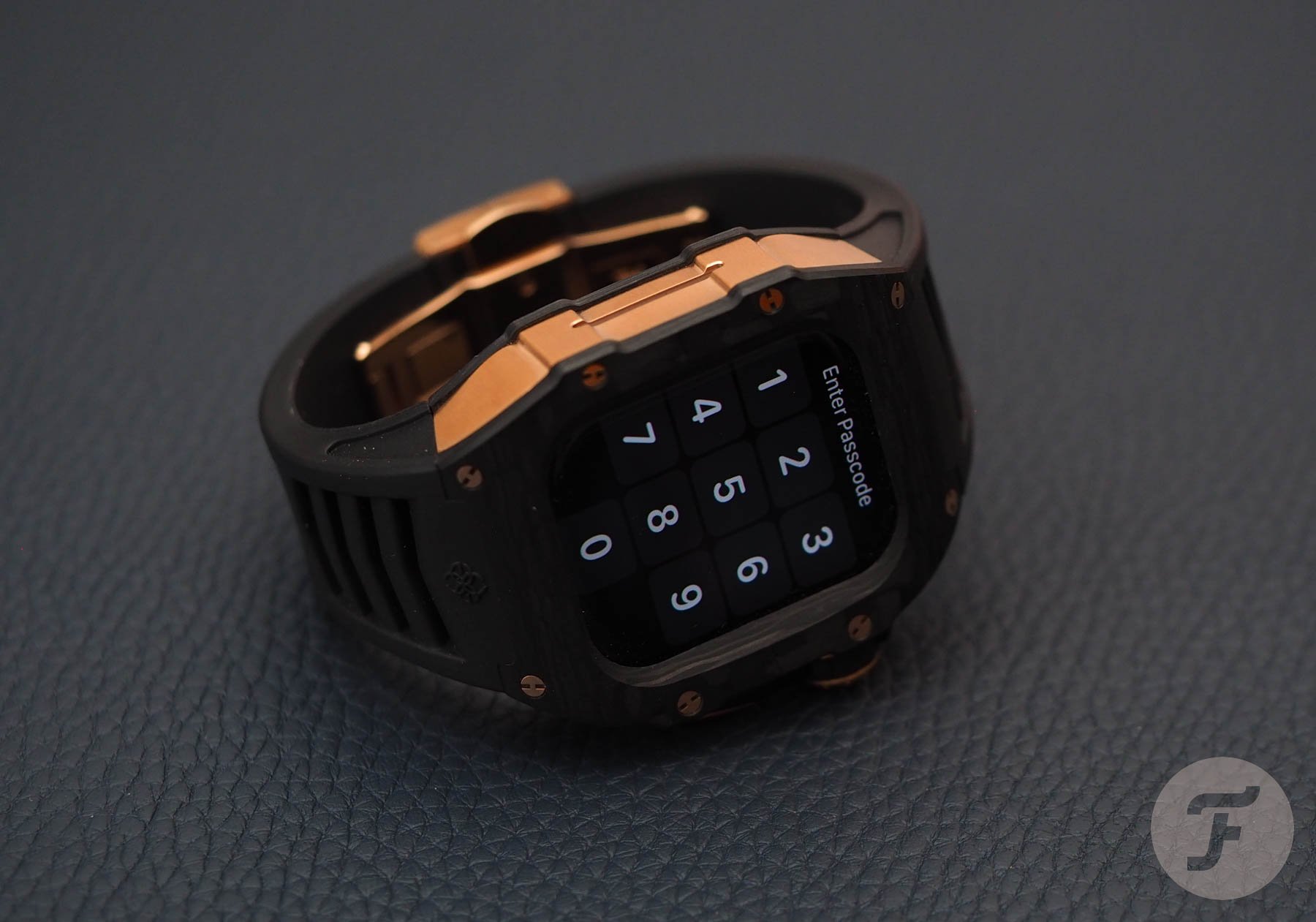 Would the screen be useable? Would the control buttons connect seamlessly to the exterior case’s extensions? Could I still charge the watch while it was in the case? Could I still use the heart rate monitor? Would it be comfortable? But perhaps most of all, would it be cool? Or would I feel like a complete wally for even entertaining the notion that an Apple Watch dressed up like a Richard Mille would scratch any itch on anyone’s body? 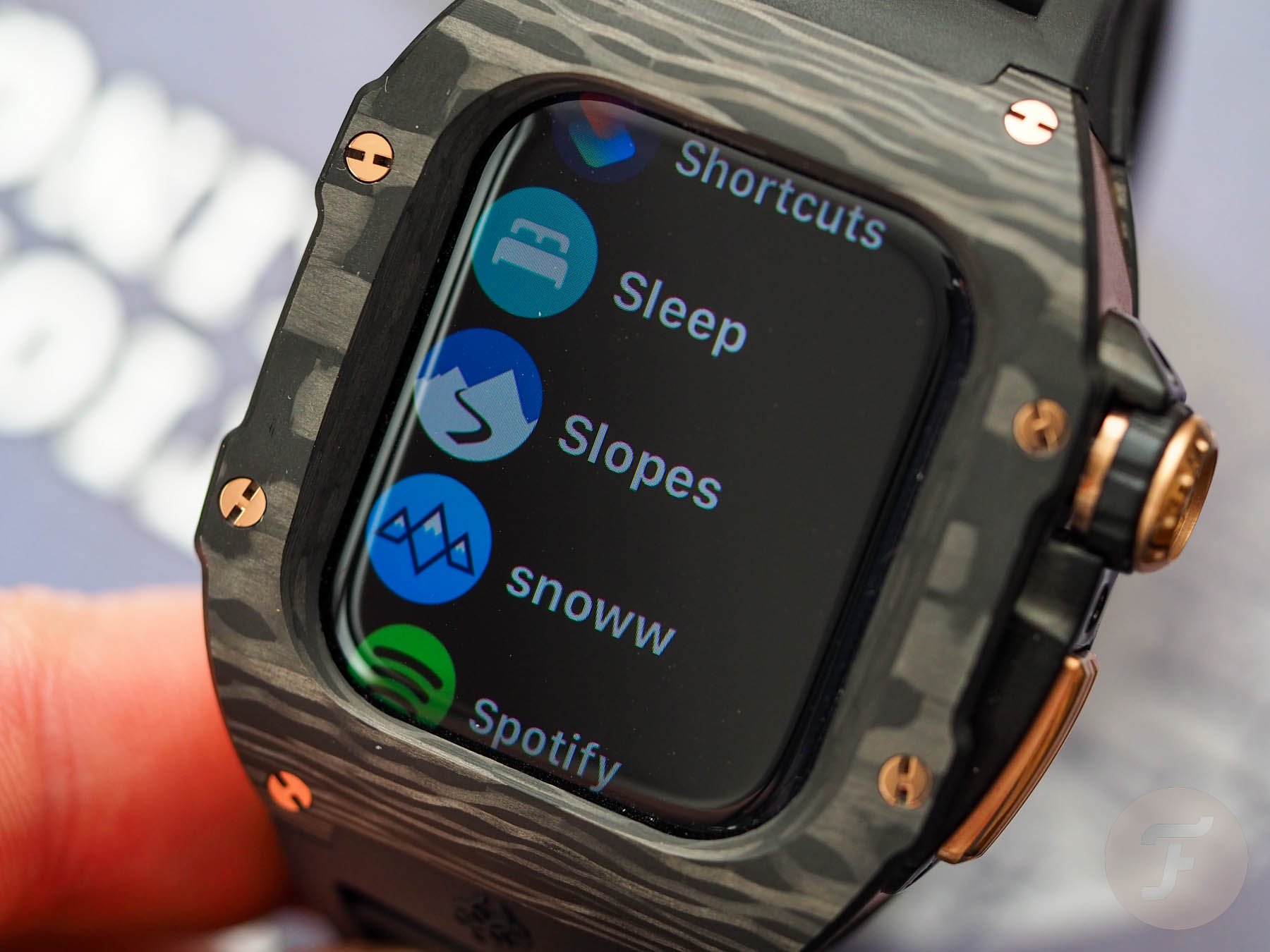 How do you set it up?

Okay, so the first thing you need to do is order the right housing for your watch. There are loads of designs available for a ton of different Apple Watch generations. Just make sure you pick the right one. Golden Concept’s customer service is responsive and friendly, so don’t be afraid to reach out for confirmation that you’ve selected the right case if you’re unsure. Not all designs are available for all products, and there’s no guarantee that this will change. Therefore, you’ll have to make do with the expansive selection the brand has right now. 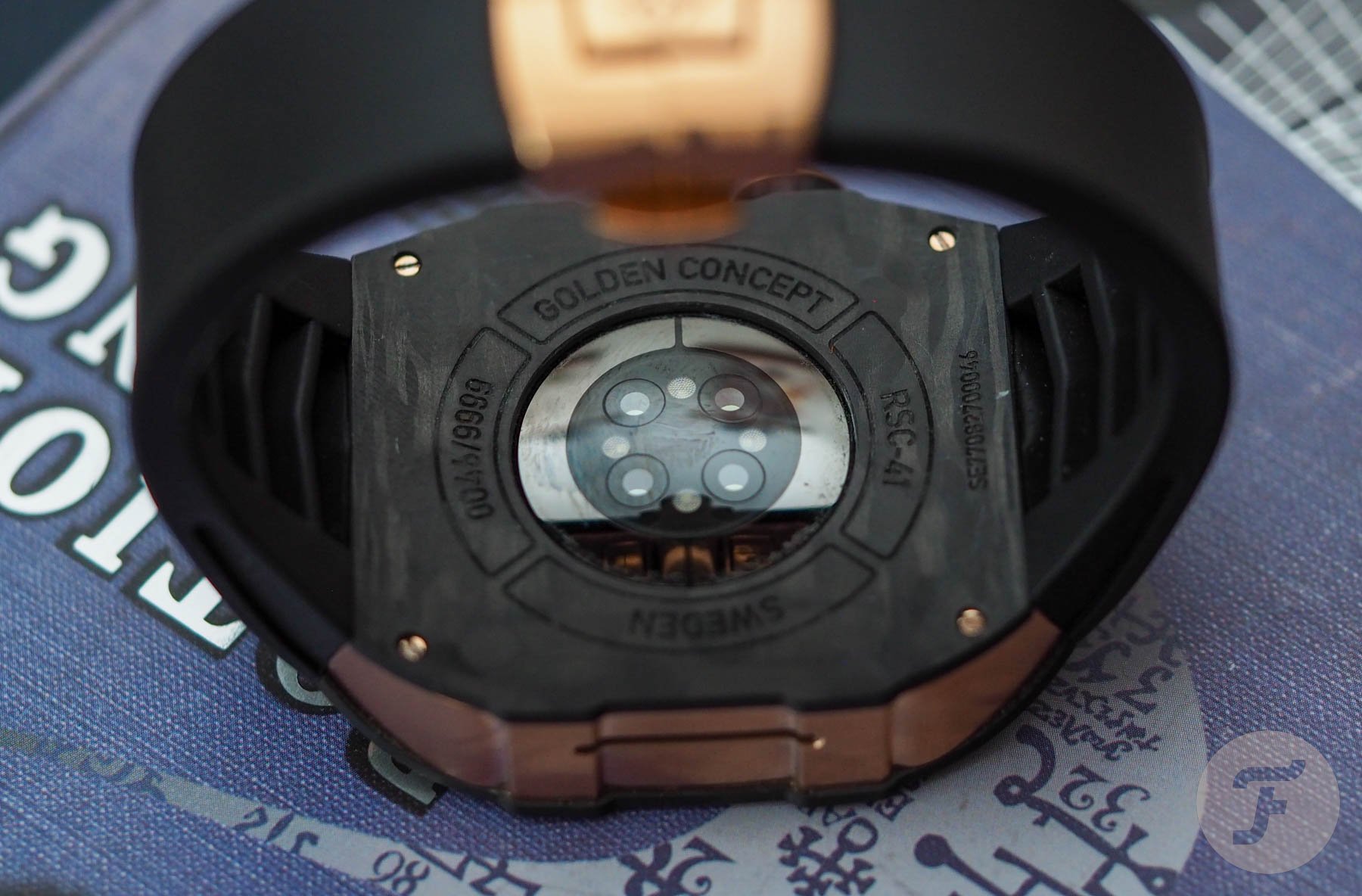 Once you have the case (which comes with a handy screwdriver secured by a magnet to the inside of the packaging), you can begin the metamorphosis. Remove the strap from your Apple Watch and slide it into one of the three “case condoms” provided. I’m sure there’s a more PG-13 term that the brand has come up with, but I deliberately didn’t check because I like “case condoms” very much, and I’m sure you will too. 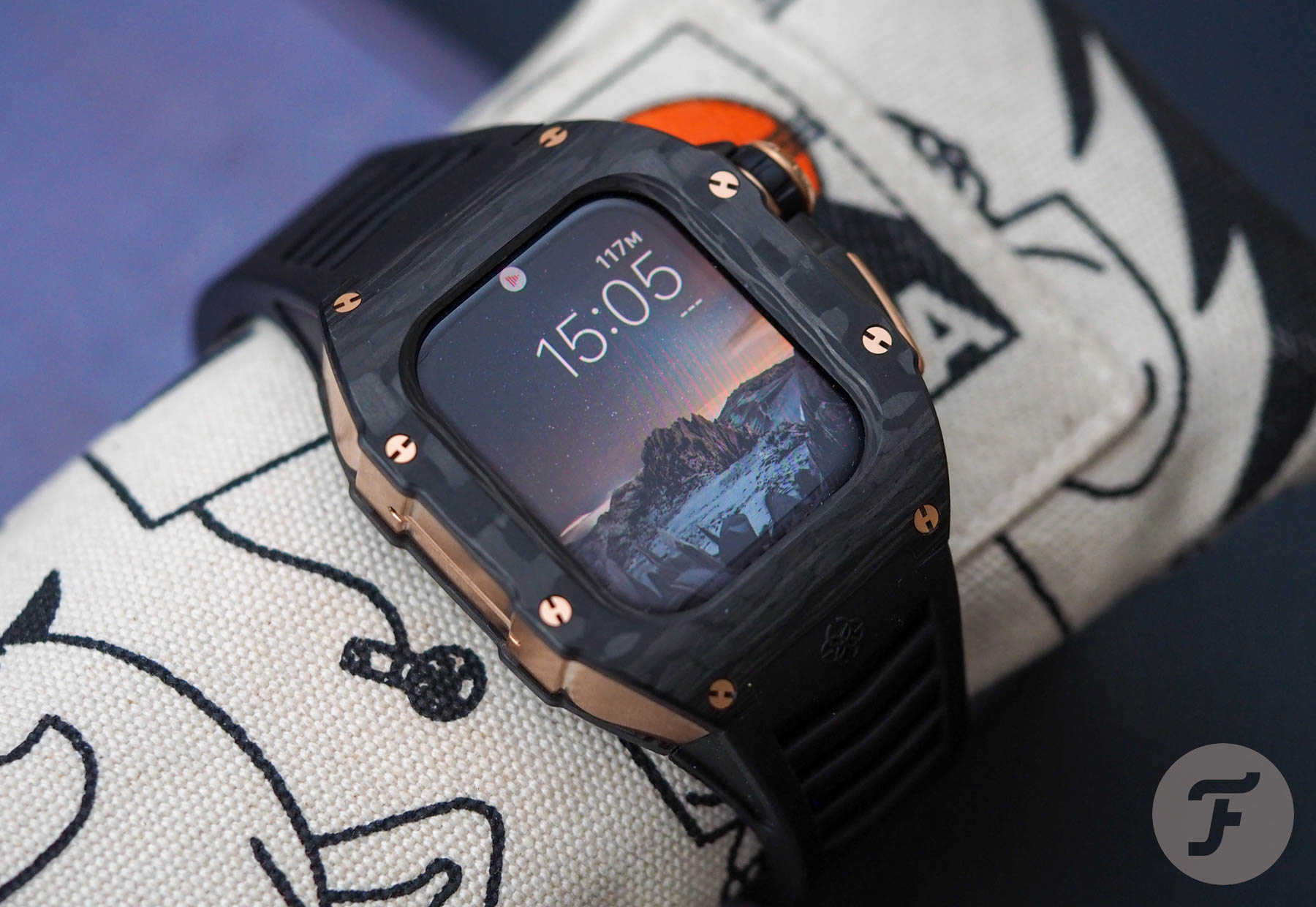 Once you have your watch head safely inside its condom, designed to protect the watch within its new housing and provide a reassuring level of stability, you can slide it into the case. Surprisingly, this stage was as straightforward as could be. I imagined it taking a certain “touch” or requiring a little trick to perfectly locate the watch. Thankfully, however, the condom did its job. Once inside the case, the screen sits just beneath the lip of the bezel. Its camber remains both visible and touchable and therefore fully operational. The watch head doesn’t feel tight in the case, nor does it move about. In short, it fits. In fact, it fits a lot better than I thought it would. 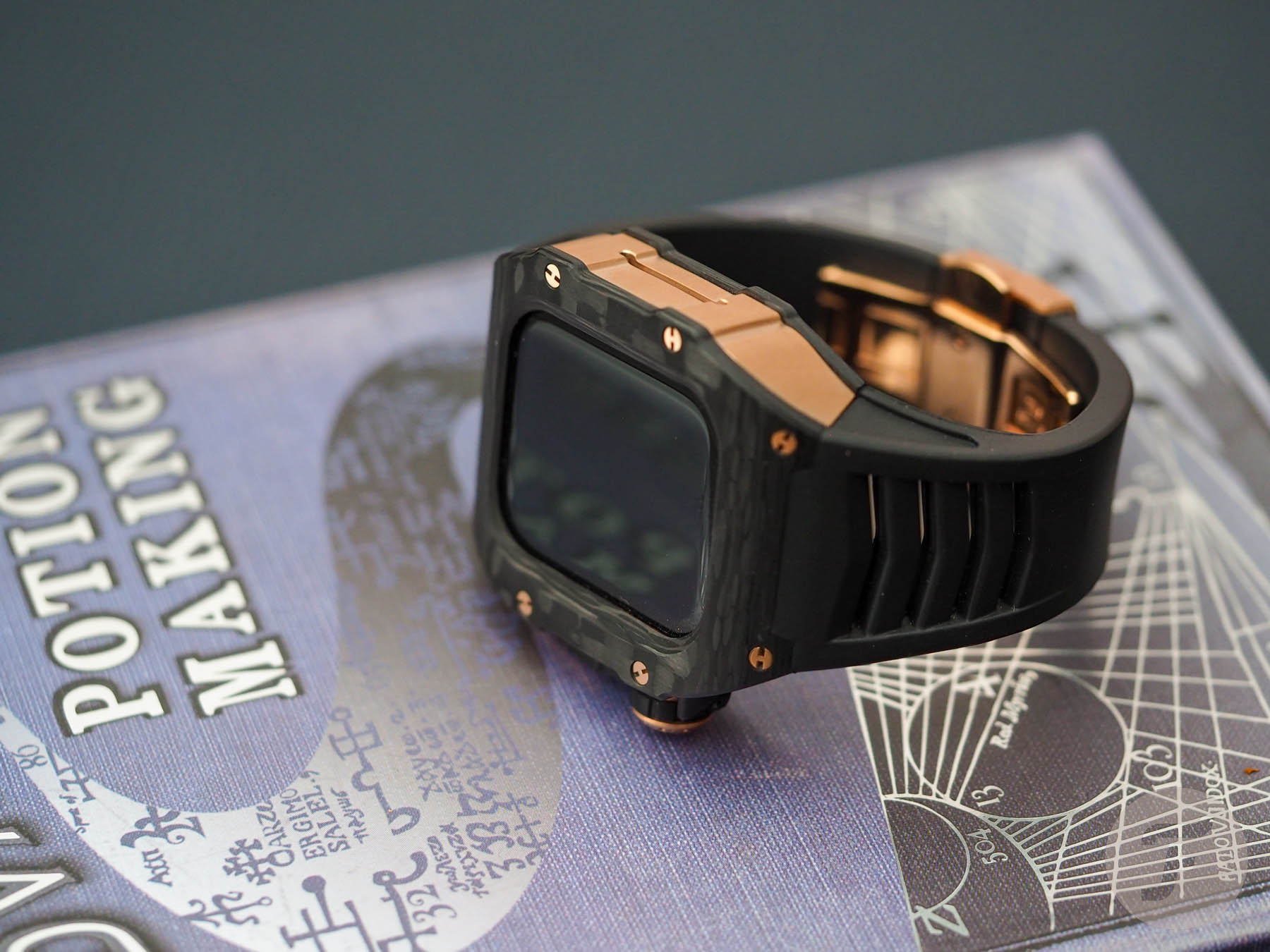 Next, you need to attach the case back. On my model, the Apple Watch Case RSC Onyx Black in rose-gold-plated titanium, the carbon plate is held in place by four gold-plated screws. They, like the case back, are easy to locate and don’t fight back when you try to screw them down. They aren’t the toughest screws in the world, and I put a couple of very minor burrs on mine (the provided screw driver’s blade is not quite thick enough to lock in place in the slot), but I don’t care at all about this. If you are bothered by less-than-perfect screws, you can have a couple of goes at it. Each case comes with a set of spares, which is very considerate. 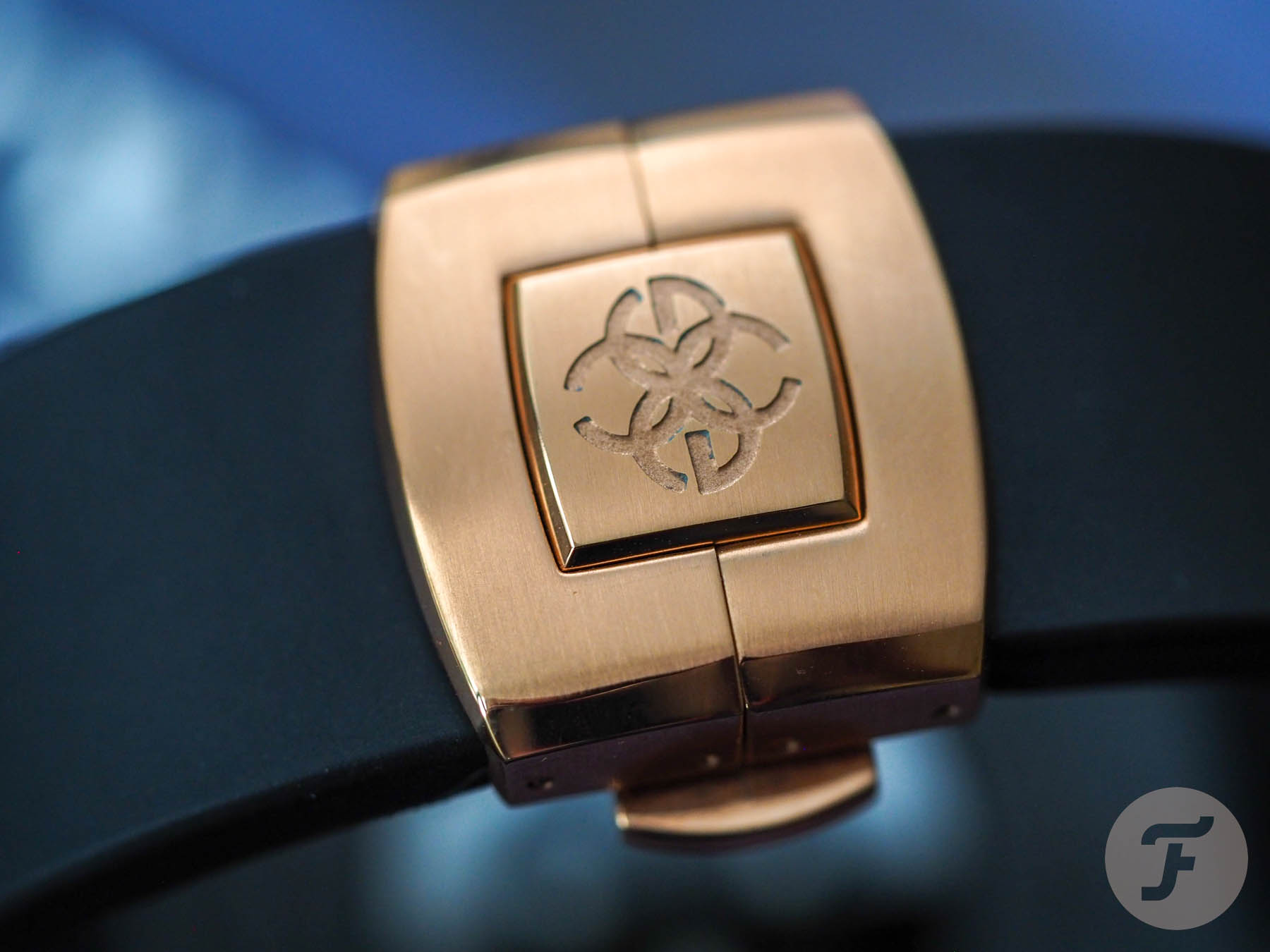 The old adage “measure twice, cut once” is in full force with this cuttable rubber strap. In fact, I think even doing that will not be enough. Do not rush. Seriously, take it one notch at a time and enjoy the process. My advice? Cut from the six-o’clock side first in case you end up with strap ends of uneven lengths. I always prefer to have the shorter end on the inside of my wrist so it pulls the watch head toward me slightly. And while these strap ends look very similar, they are different. 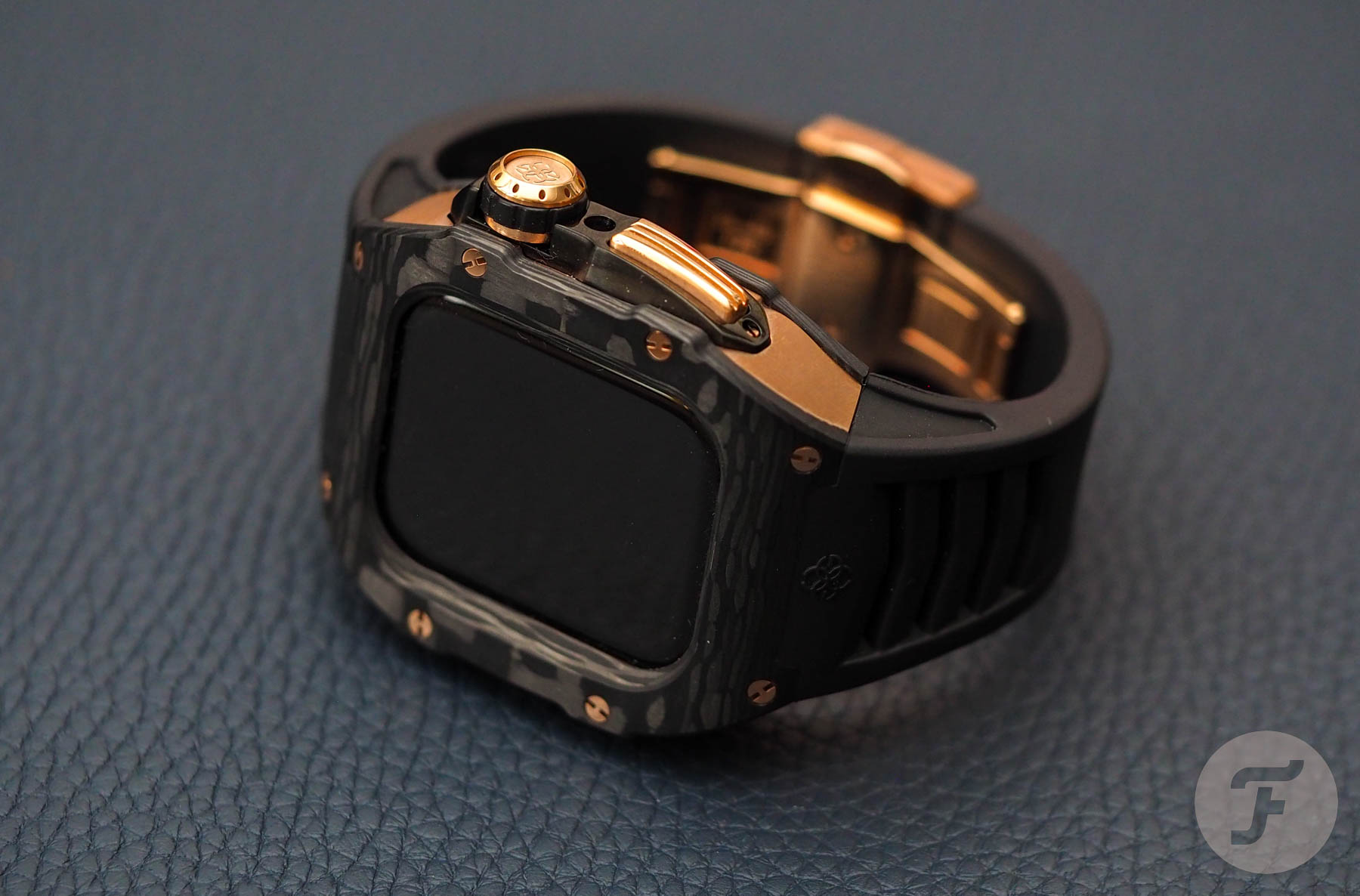 Yes, they both fit between both sets of lugs. However, only one end of the strap (the six-o’clock side) has the logo molded into it. That means if you accidentally overcut the 12-o’clock side, you’d need to relocate the logo to an illegible position to get the best fit out of your watch case.

So how does it wear? The rubber strap is very comfortable. The clasp is secure and reassuringly well made. While the whole concept and even the end result may be preposterously flashy for a man of my tastes and demeanor, I must say everything is rather well made. Had I actually set out looking for an after-market housing for my Apple Watch Series 7, this model from Golden Concept would not have disappointed me at all. 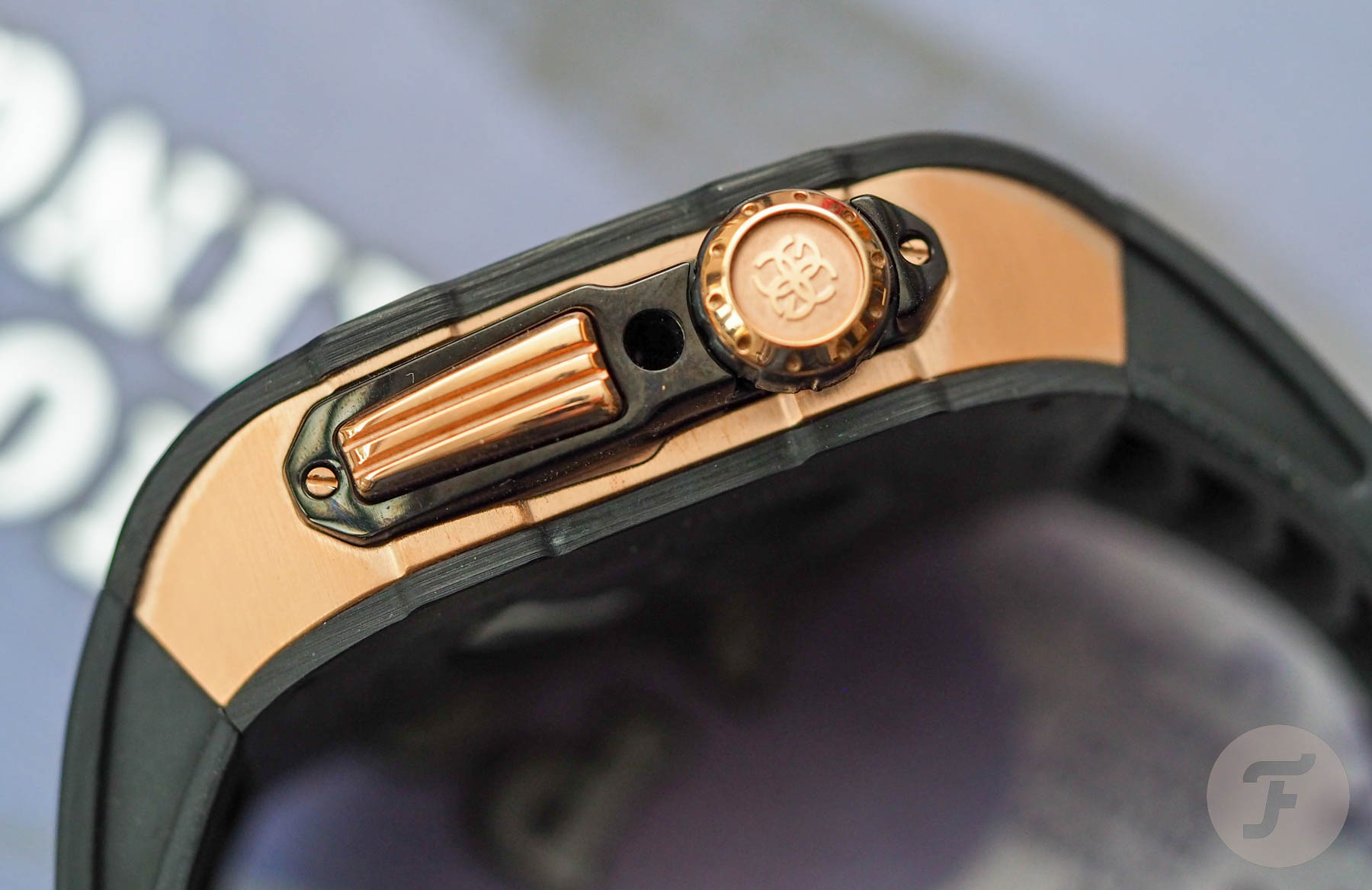 Aside from the strap-cutting tip, which is the most generic, I would, if I had the chance again, go for the uncoated titanium version rather than the rose-gold-plated model. Why? Because plating is not really my thing. I chose this model for review because I thought it was the most “extra” model available. I thought that if I were going to review this, I should review the boldest version available. It’s really well done and a surprisingly well-executed concept, but I do look like a 1980s drug dealer whenever I strap it on. Maybe if I shave the mustache and ditch the tight white slacks, I can get away with it…

The case of the Apple Watch Case RSC Onyx Black is made from titanium and PLY carbon composite. My version (for the 41mm Apple Watch) is 41mm wide and 48mm from “lug to lug”. It is 13.8mm thick and fits wrists up to 25cm in diameter but only down to wrists of 16.5cm (I had to cut away all the rubber notches, and the result fits me perfectly). Bear that in mind if you are a slimmer-wristed person like me. 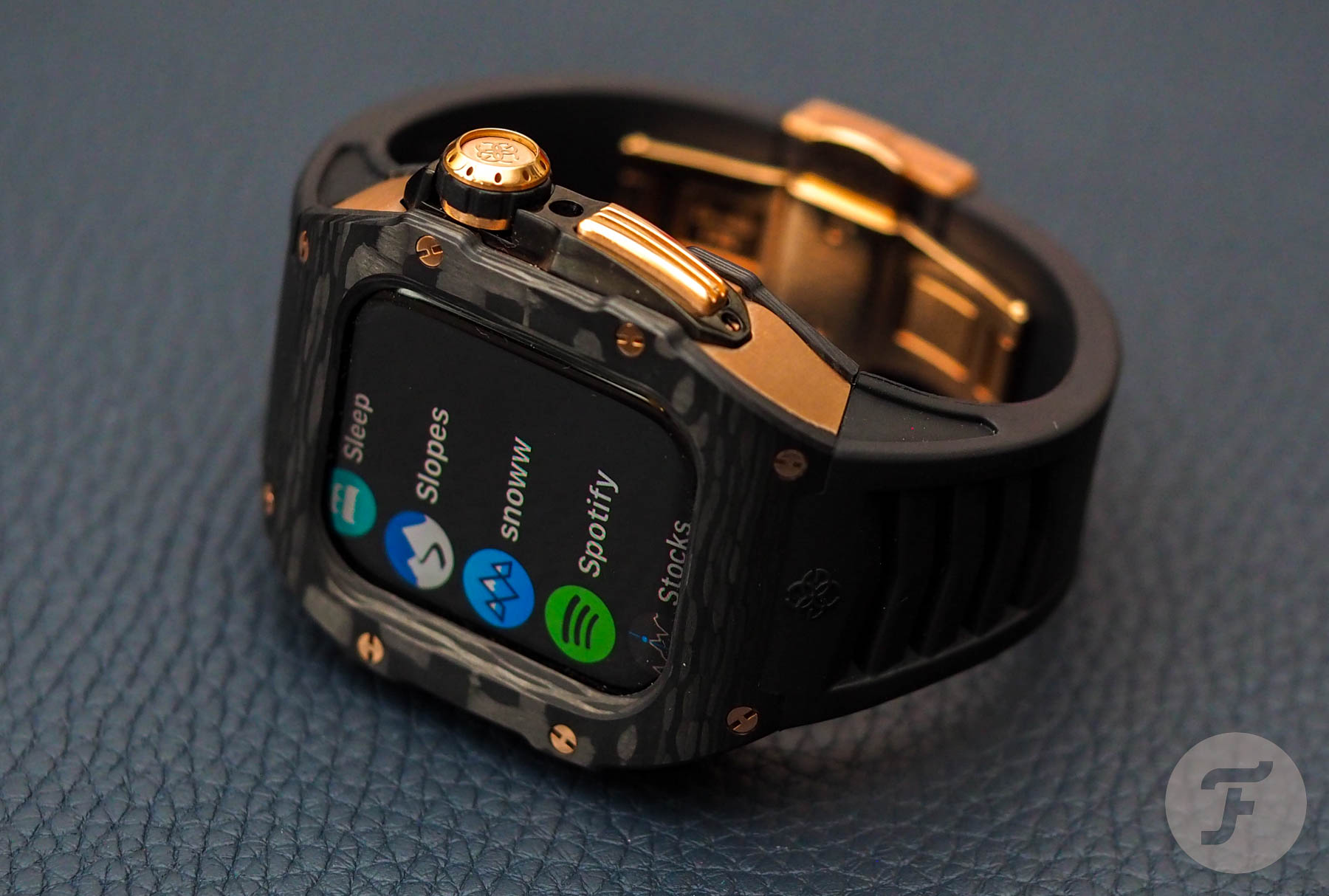 The case has no negative effect on the Apple Watch’s water resistance or functions. The watch can be charged while cased and operated with ease by way of the screen, the crown, and the button. This model from Golden Concept is compatible with Apple Watch Series 7, 6, 5, 4, and SE, but make sure you select the right one from the drop-down menu on the product page because all the images look pretty much the same. 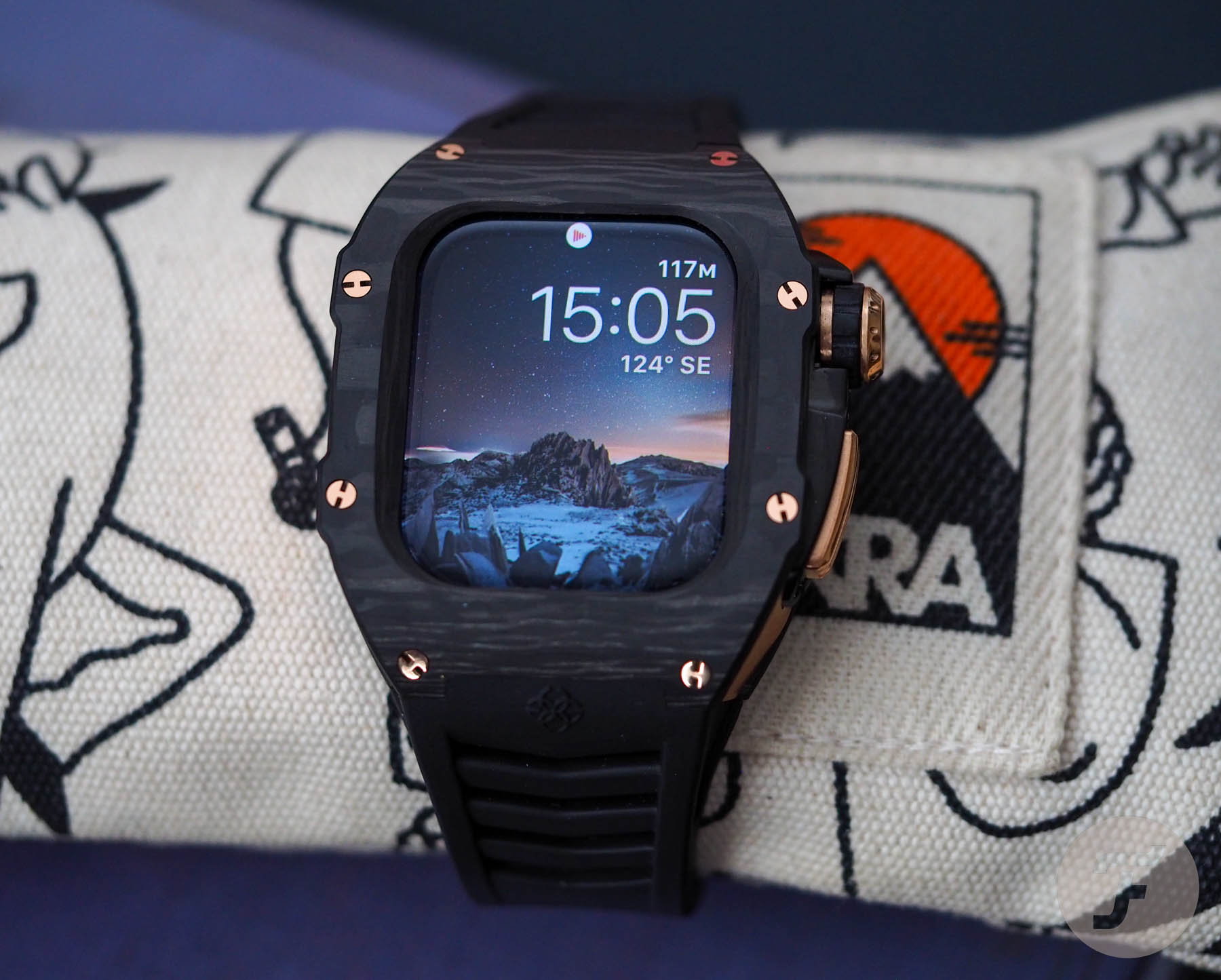 Light on the wrist, less so on the pocket

Amazingly, this watch case weighs only 20 grams. Although my girlfriend hates it and keeps threatening to report me to the police, I’d be lying if I said I didn’t think it was cool. I do think it is cool. And honestly, although I hadn’t been looking for a new housing for my Apple Watch when this one came along and dropped into my lap, I’ll definitely be keeping an eye on Golden Concept to see what else the brand comes up with soon. But save your pennies because these things don’t come cheap. Although the presence of some pretty nifty materials and the clear fact a great deal of care has been taken to get the internal measurements spot on, one of these beauties will cost you $1,599. Learn more about Golden Concept here.