For some reason, I just can’t seem to pass up a rescue project. I’ve been collecting watches for almost a decade and my acquisitions have been wide-ranging. Looking back, it’s clear I had no idea what I wanted. The more I explored the more fascinated I became, the deeper I went down the rabbit hole. Sound familiar to any of you? If there’s a consistent element, it’s my penchant for the forlorn stray, often found at auction…

Most of my collection has come via estate and specialized watch auctions. I usually obtain these pieces by making absentee bids. Buying is always a gamble if you’re working from a few photos and a brief catalog description. I’ve been had a couple of times. I’ve purchased a Heuer “Frankenwatch: and an outright fake Tutima, for my sins. But the auction houses, with reputations to protect, took them back, no questions asked. 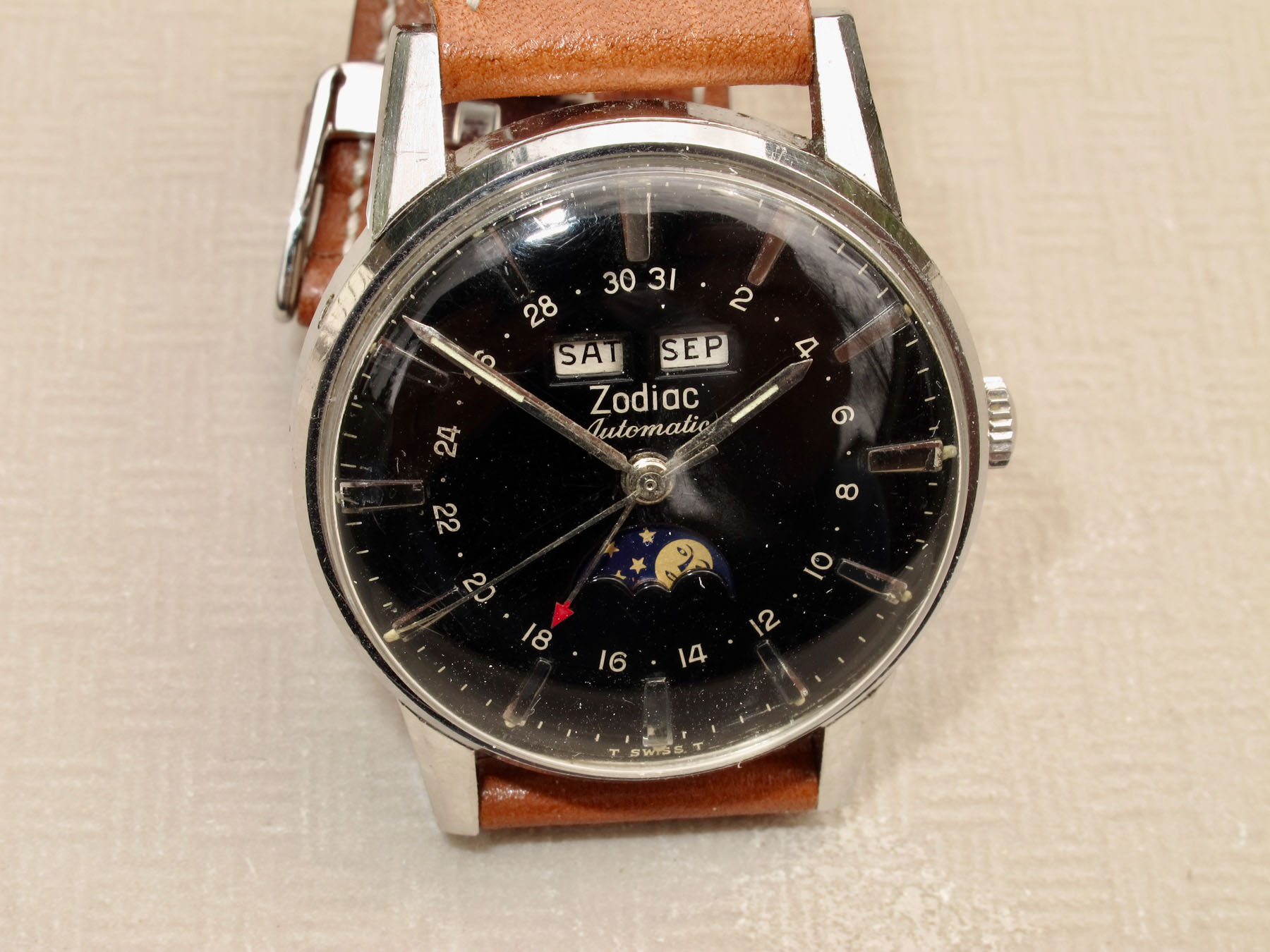 Sensible collectors know that condition is everything. That’s true for watches, Georgian furniture, or classic cars. Whereas most buyers might quickly skip past a listing for a non-functioning piece, for me the term “not currently running” became catnip.

Not every dead watch was stated as explicitly so. I fell for a Zodiac triple-calendar moonphase automatic, Ref. 742-908, which was listed as in good condition. I broke one of my own rules by not inquiring further. When it arrived it was clear all was not well. Winding the watch produced only a few seconds of operation. 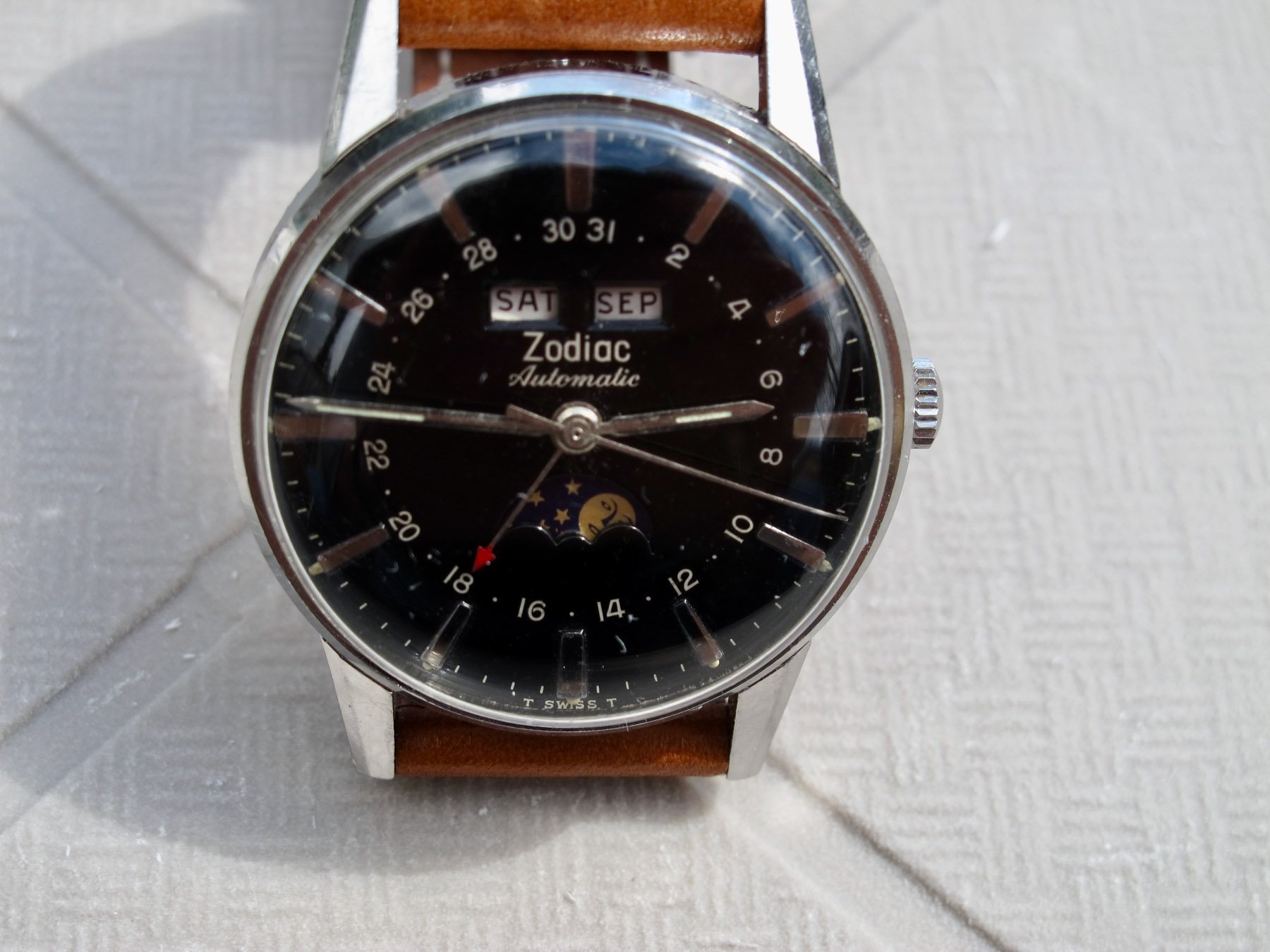 My backstop in these situations is Norbert Zerbes, who operates The German Watchmaker out of a tiny shop in downtown Vancouver’s Yaletown district. He’s vetted dozens of prospective purchases from photos I’ve sent him, saving me from more than one buying blunder.

The Zodiac revealed what looked like an amateurish intervention that left minute scratches on the dial when the hands were removed. Further investigation turned up a damaged reversing wheel and worn bushings. Norbert put those complaints right.

Something similar happened when I won a purportedly working Gallet Multichron triple-calendar chronograph, which included its original box, but it stopped shortly after being wound. Auction houses test pieces by watching them tick for a minute or so. The busy appraiser likely saw the second hand going and moved on.

Norbert diagnosed a broken mainspring in the Valjoux 72C movement. The challenge became sourcing a replacement but a few hundred dollars later, the Gallet was ticking over nicely. 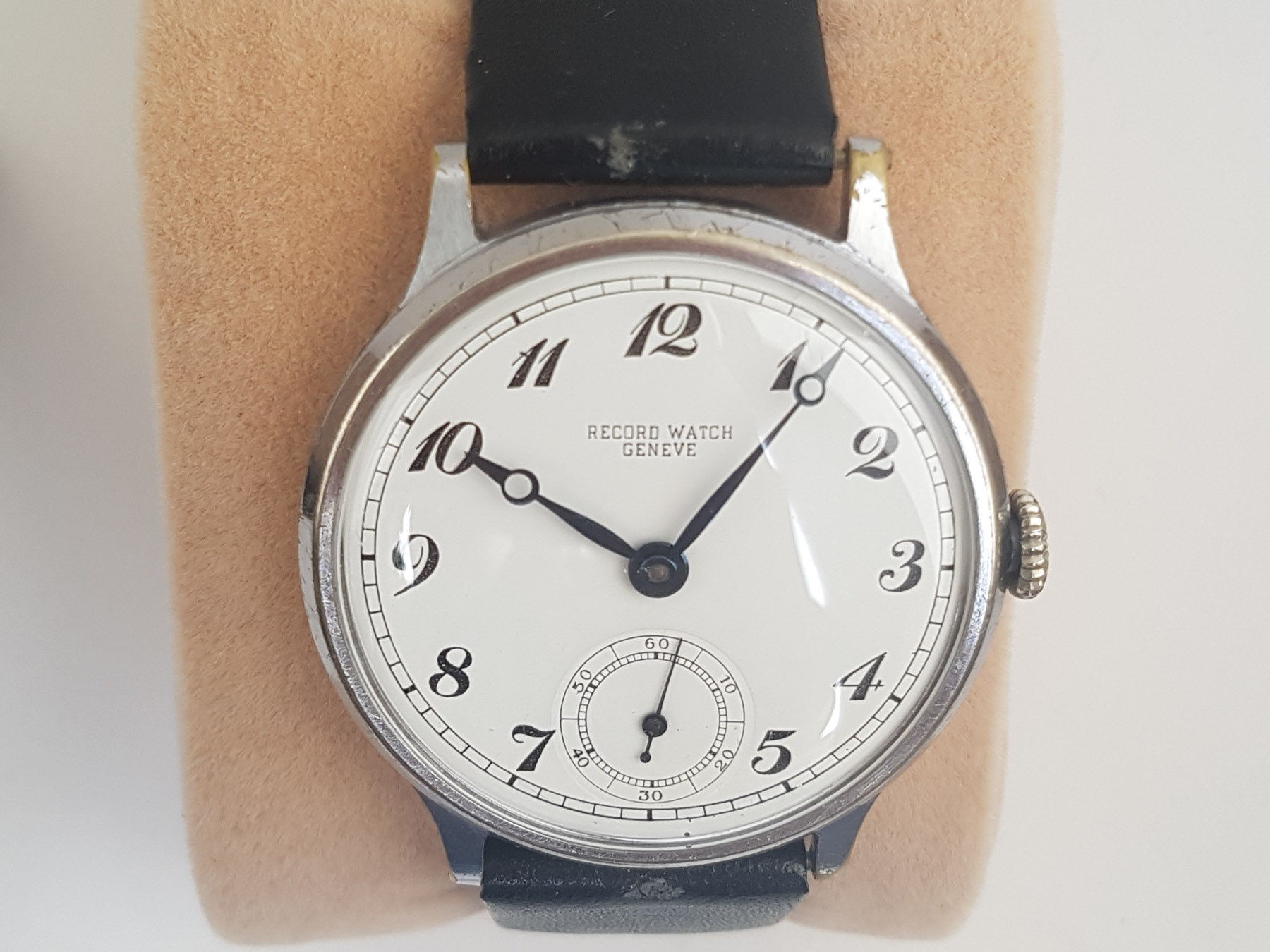 One memorable bargain rescue was a circa 1930 Record. It was a “jumbo” (40mm) wristwatch for a time when most men’s watches were 30-34mm. The movement was one Record used in its hunter-cased pocket watches but this doesn’t appear to be a conversion.

The German auction house’s listing said “uhr läuft nicht,” but I couldn’t resist. The shipping from Germany cost about as much as the watch and Norbert quickly found a mainspring for it. 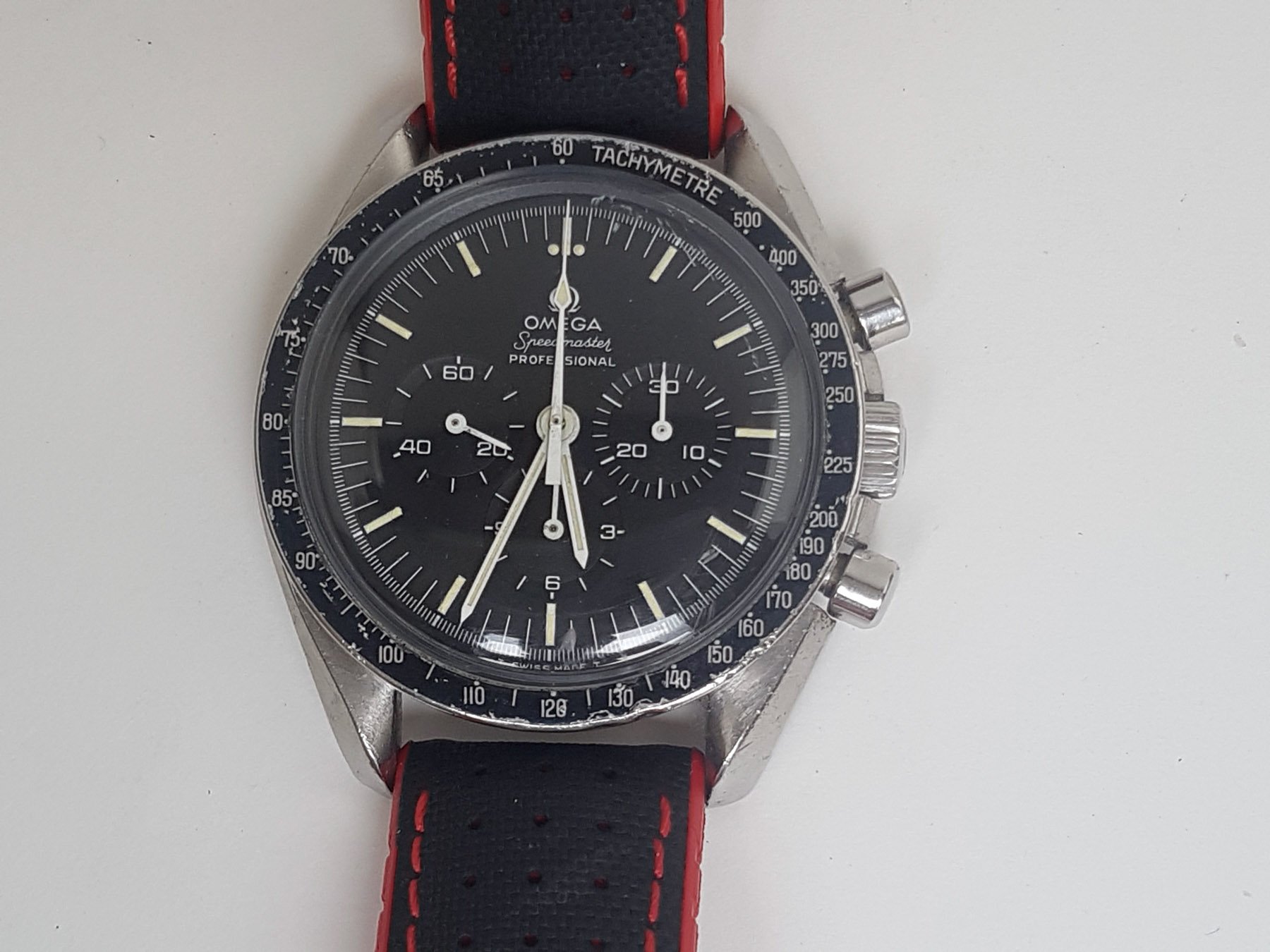 My favorite rescue has to be the Omega Speedmaster Ref. 145.022 ST 71 I won in a well-known British watch sale. I always wanted a Moonwatch but most commanded budget-busting prices. I snagged this one probably because it looked so unappetizing.

The watch ran but the crystal was beyond saving, the bezel looked like a rat had gnawed the edges and the dial had a nasty-looking brown ring around the edge. Rust? And if so, what did that portend for inside? This was probably my biggest gamble.

When we opened it, we were pleasantly surprised. Norbert’s first discovery was the Speedy appeared never to have been serviced since it was new! The inside case back had no watchmaker’s markings. While the case and movement showed some signs of rust, that brown ring turned out to be the remains of the watch’s completely dissolved rubber gaskets. Norbert cleaned and de-rusted the movement and case, carefully cleaned the dial to reveal its original beauty. Furthermore, he swapped the scuffed crystal with an authentic Omega Hesalite replacement.

One thing we couldn’t fix was the original bracelet, which was included in the lot but missing the end links. I suppose if I spent enough I could find a pair but the watch lives happily on a nice Hirsch Robby strap. I elected not to replace the chewed-up bezel because it is part of the watch’s long story, as is the love inscription on the back. Sometimes, I wonder how such a gift ended up at auction instead of becoming a family heirloom. 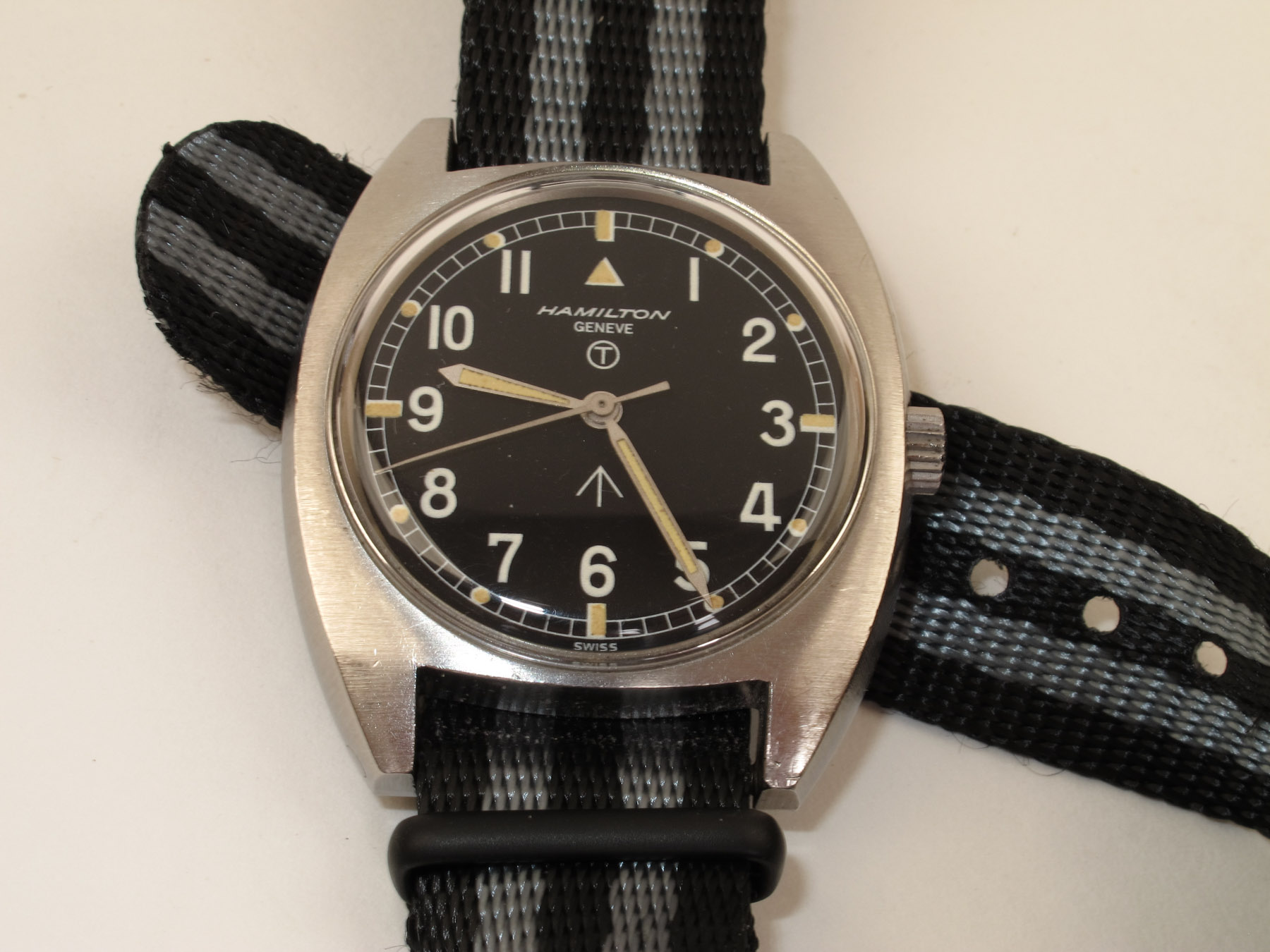 Maybe the most hopeless-looking project was a 1974 Hamilton Geneve RAF 6BB. The listing included the dreaded “not currently running” descriptor. Whenever possible, I ask the auction house to send me a photo of the movement, which I flip to Norbert to assess the condition. In this case, it declined, citing the one-piece design of the case. But the overall condition, including the dial, was very good and Norbert advised that this Hamilton’s caliber was an ETA-based movement. I tailored my bid accordingly, winning it for not much over the auction house’s minimum valuation.

The watch, when we finally opened it, was a disaster. It appeared someone who fancied themselves a watchmaker tried to fix some problem using a pair of pliers and a pointed stick. The hairspring, balance control, and balance wheel were among the casualties of this amateur intervention. Once again, Norbert was able to bring the watch back to life. I discarded the damaged bracelet and the Hammy looks very attractive now on a Bond NATO.

So what lessons are there in my adventures?

I’d start with this: don’t be tempted by non-functioning watches unless you have a good watchmaker backing you up or you have mad skills yourself.

If you clear that bar you still need to do some homework. Whether you’re buying from a private seller, on eBay, an auction house, or elsewhere, get as much information as possible about the condition, including photos, to help you assess repairability.

Think carefully about how much you’re willing to spend in total to buy and restore the watch. If you primarily buy to flip, this calculation is crucial. Research on what a working example sells for becomes more important than if, like me, you buy primarily to build your collection. I normally get a ballpark figure on repair and service and add some margin for the unforeseen.

Parts availability is also a factor. The older the watch, the harder it may be to source replacement bits. That’s not always a deal-breaker. Norbert, for instance, has been able to make or adapt parts in a couple of instances. 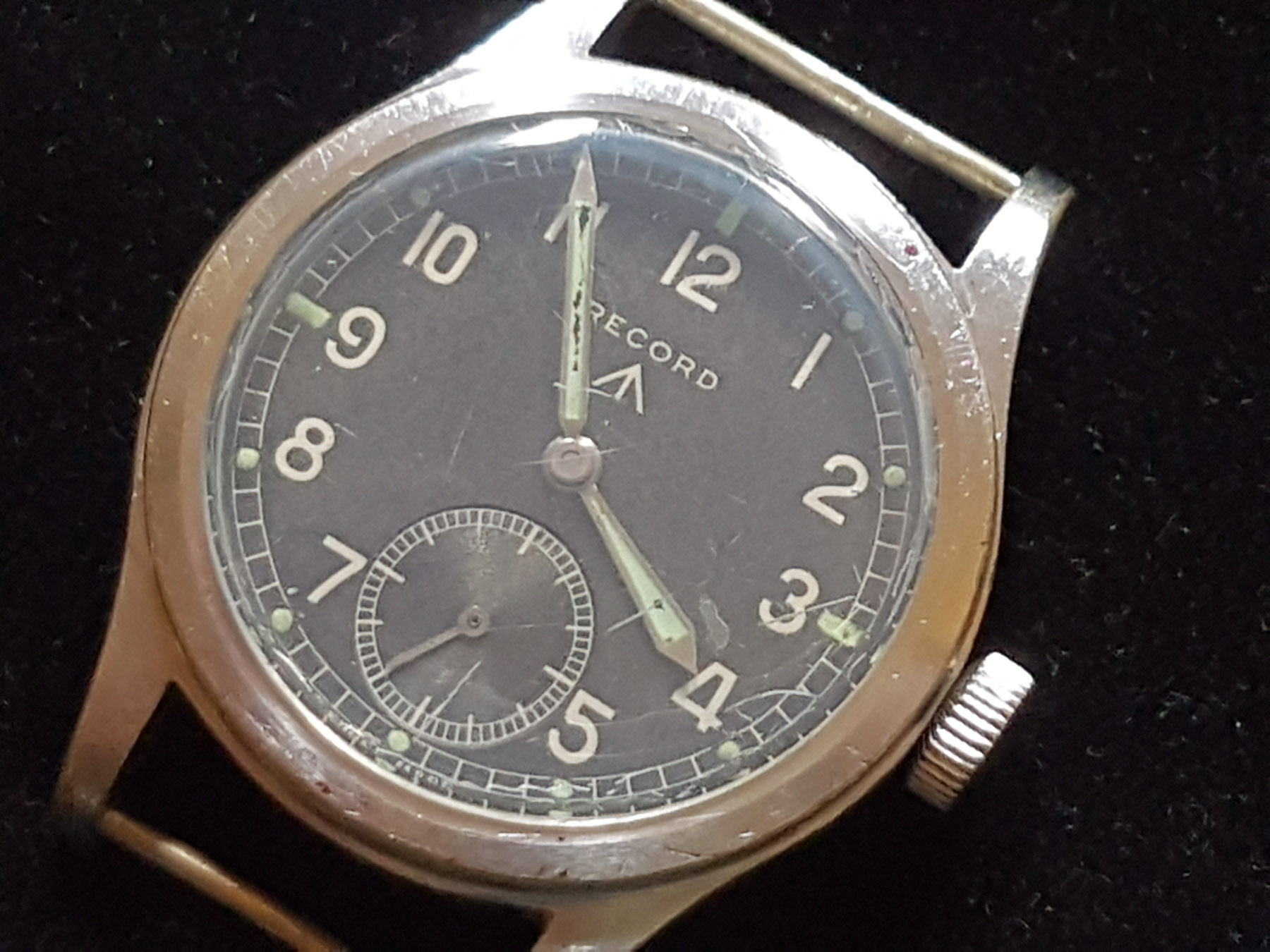 I’m not finished rescuing watches. As I write this, Norbert has just taken in a broken Record to work on — one of the famous Dirty Dozen watches ordered by the British military in the Second World War. The minute hand is floating around the dial and the mainspring appears broken. Based on his estimate, I should come out ahead once it’s repaired.

But that’s less important to me than bringing a quality vintage watch back into the world from someone’s dresser drawer.