There is a fair chance you never heard from this small watch brand from Austria, run by Maria and Richard Habring. We don’t blame you of course, but if this is the case, it is time you do learn about Habring2. This watch company was founded in 2004 and gained a tremendous amount of respect among watch enthusiasts and collectors world wide.

About time we spend some time with one of their watches. Actually, it is the watch that put Habring2 on the horological map of true manufactures. The Habring2 Felix is their first watch with an entirely in-house developed and produced movement, the caliber A11B. I was able to wear one for a couple of weeks and will share my thoughts about the Habring2 Felix with you in this review. 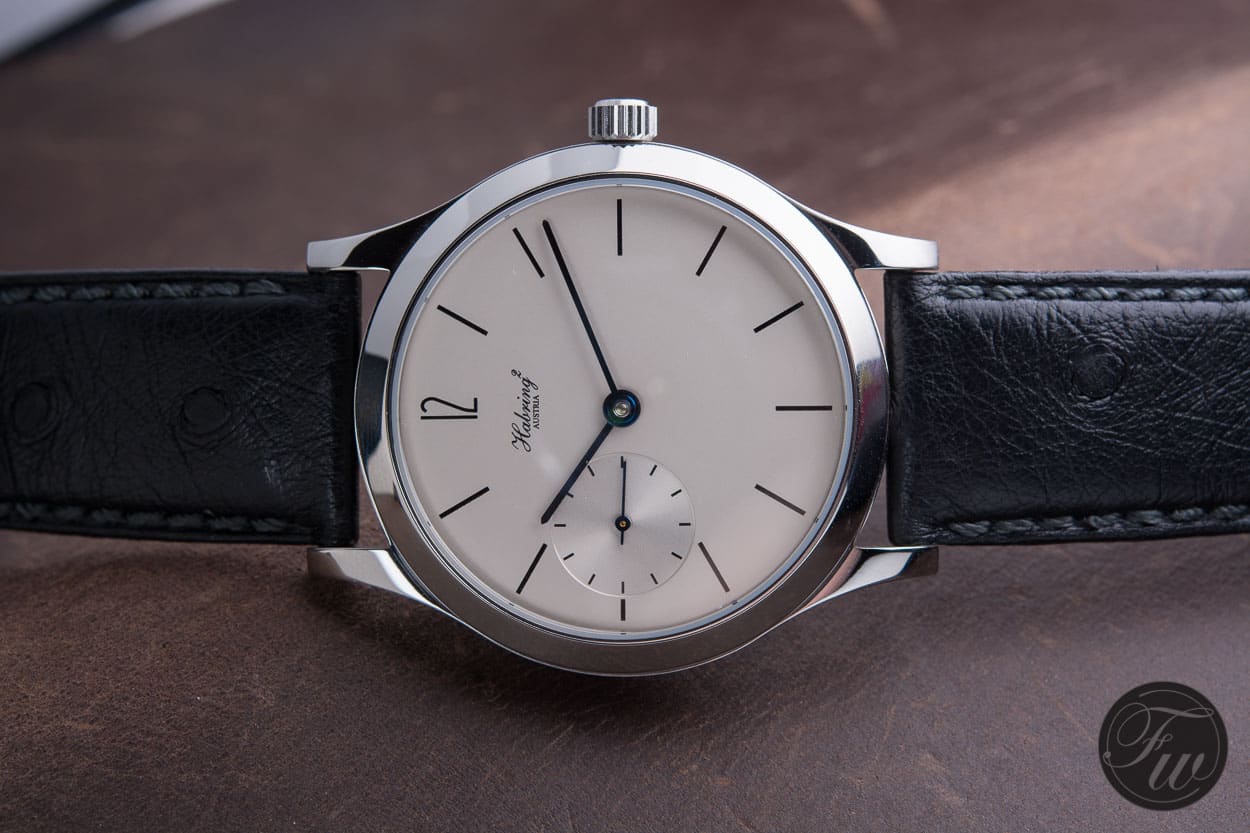 Truth to be told, I don’t own a real modern dress watch today. My wife snatched my Chronoswiss Regulateur and the dress watches I do have (or can keep), are vintage ones with incredibly small diameters (for today’s standards). However, I do feel that I should have one actually – for quite a while now – but many of them are either making me think I am old or are just too expensive for me right now. Therefore, I was happy to see that this Habring2 Felix has a modern cut 38.5mm and only measures 7mm in height. A perfect size for a dress watch in my book.

You might think the Habring2 Felix looks a bit boring at first sight, but I’ve found the opposite to be true. Sure, the silvery white dial with stick markers and slim hands are far away from a cluttered dial, but for a dress watch it should be calm and easy on the eyes. The case is thin and the lugs are long and curved, making it a nice thin watch that will easily fit under any cuff. On top, you’ll find a smooth polished bezel and a spherical sapphire crystal. The winding crown has a perfect size compared to the case, yet big enough to be grasped easily by the owner. Winding the movement with the unsigned crown is a joy, as smooth as silk. I am not sure why Habring2 left the crown unsigned, but I also can’t come up with something they should have engraved in there. 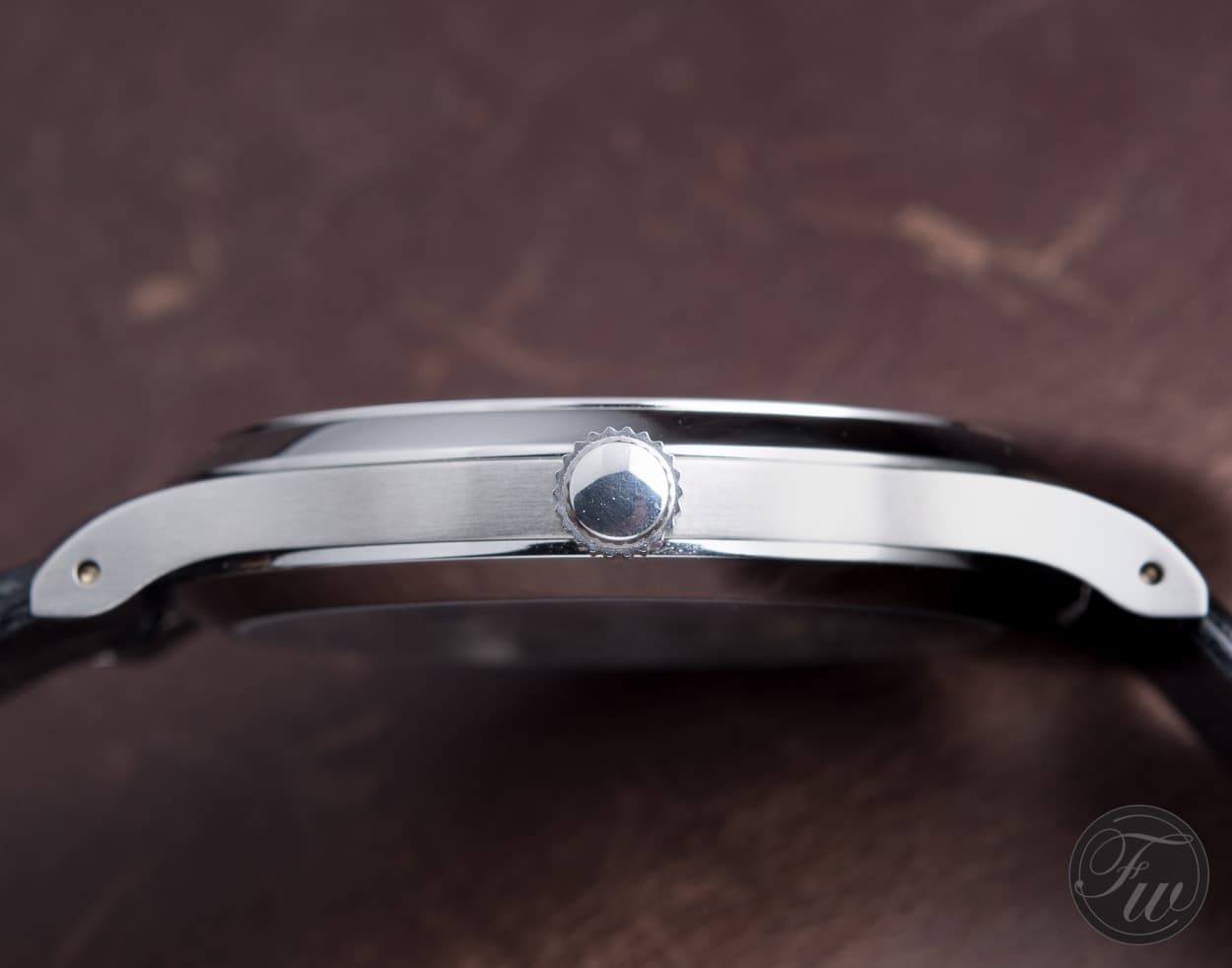 As you can see below, the dial on the Habring2 Felix has some neat characteristics. The small seconds at 9 o’clock (this watch can also be delivered without, making it a two-hand watch) have this fine grain pattern in the sub dial. The Arabic ’12’ on top of the dial goes almost unnoticed, as it perfectly blends in with the eleven remaining stick markers. On request, the Habring2 Felix is also available with a Roman ‘XII’. Although I love my two-hand Audemars Piguet Royal Oak, and many praise it for having only two hands, I wonder whether the Habring2 Felix gets away with it as it will become even cleaner than it already is. The fine grain in the sub dial at 9 o’clock ‘breaks’ the dial a bit and makes it interesting to look at, over and over again. The Habring2 logo is written in this Italic font which looks playful and below there is a proud mention of the country of origin, Austria. 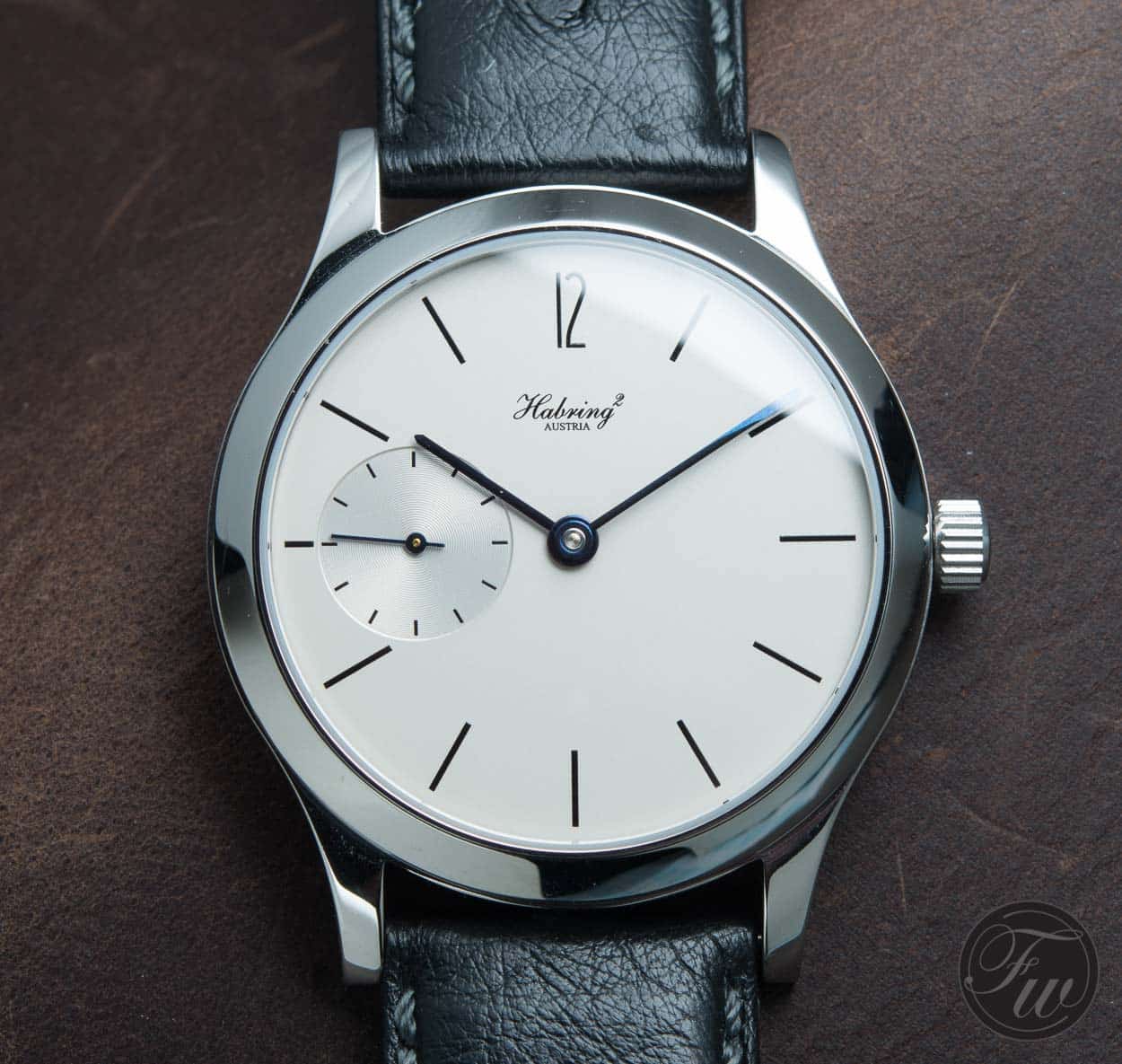 The polished bezel and upper side of the lugs and brushed side of the watch makes the Habring2 Felix playful with sun light. Turning the watch around will give you a nice view on the in-house developed Habring2 caliber A11B movement. The Habring2 A11 movements will have a couple of variants, like the A11D (with date feature), A11S (jumping second) and a A11SD (you guessed it already, a date and jumping second). However, the Felix is coming with the A11B movement. A beautiful 30mm hand-wound movement with 48-hours of power reserve and finished (polished edges, perlage, engravings) by hand.

The escapement is anti-magnetic and the KIF shock protection complies to DIN and NIHS standards. The Habring2 caliber A11B movement has 18 jewels, ticks at 28,800vph and consists of 99 parts in total. 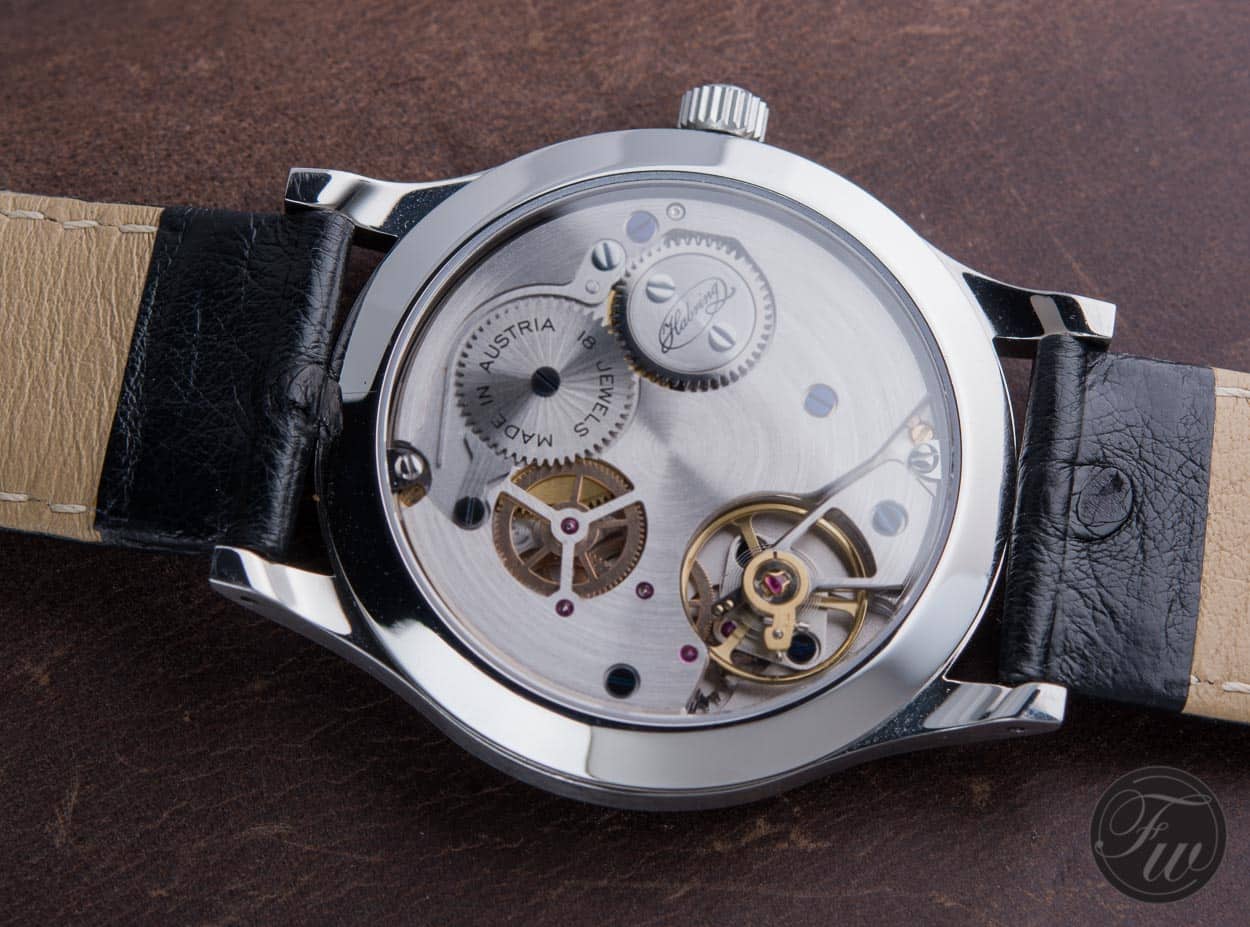 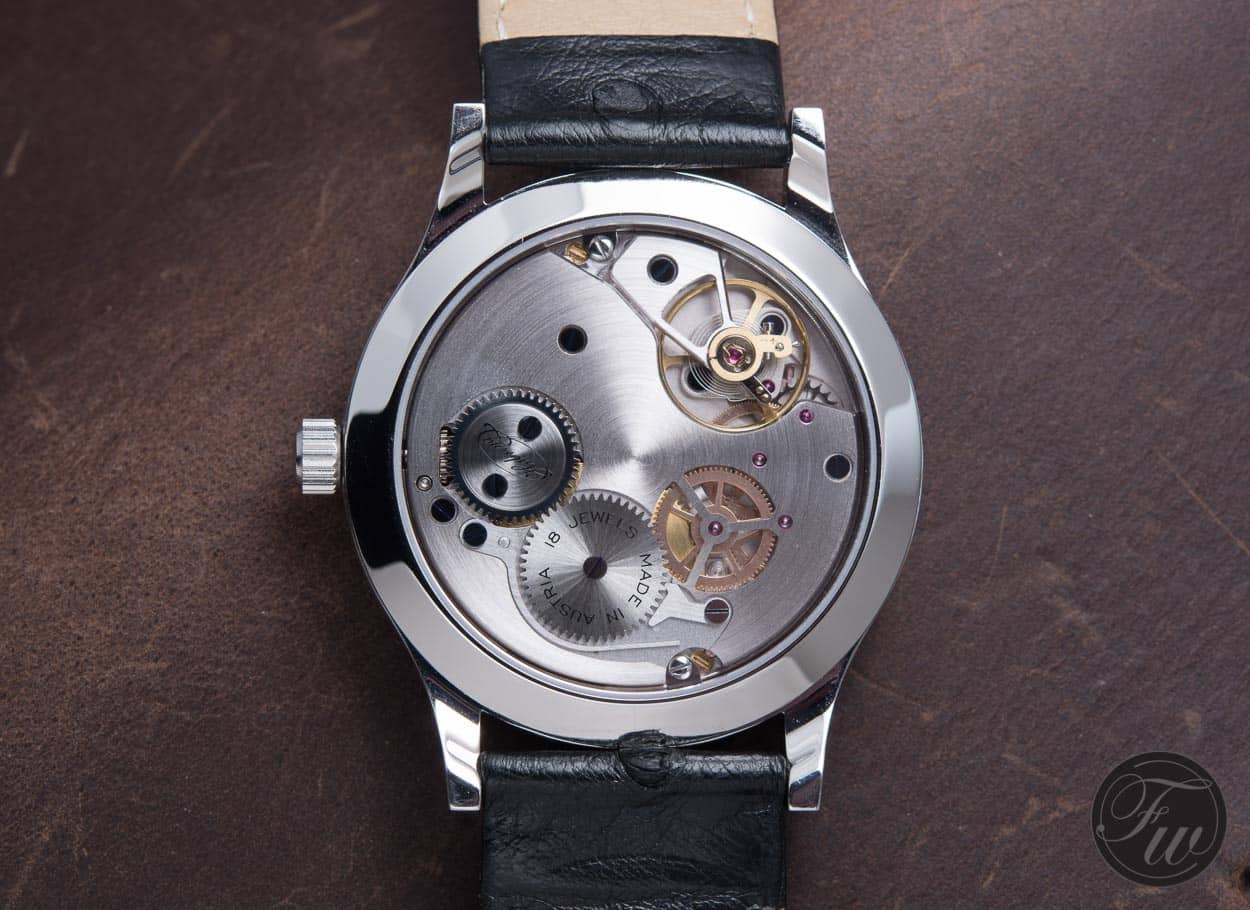 The watch Habring2 sent me came on this beautiful ostrich strap that matched nicely with the dial of the watch. On the official website the Habring2 Felix is being pictured with a brown calf strap, but for formal occasions I’d prefer the ostrich strap it came on.

I’ve worn the watch for quite a while which tells me that it is an easy and comfortable watch to wear. Some watches that I receive for review – or that I even own myself – are becoming uncomfortable or better said, it requires a bit of effort to wear them after a while. This Habring2 Felix, despite the statement I wrote earlier in this review about it being a bit boring looking at first sight, is something I could buy myself and even more important, wear for a long time.

It might not be the conversation maker you’d want it to be, as there is enough you can tell and explain about this watch, but the average conversation partner is not very likely to identify it. However, other (watch) people will surely appreciate the looks of the watch and then it is up to you – the wearer – to show them the nice in-house movement and tell them about this small manufacture from Austria. From the start I liked the in-house movement and the clean look of this Austrian watch, the design was something I started to appreciate even more after time. 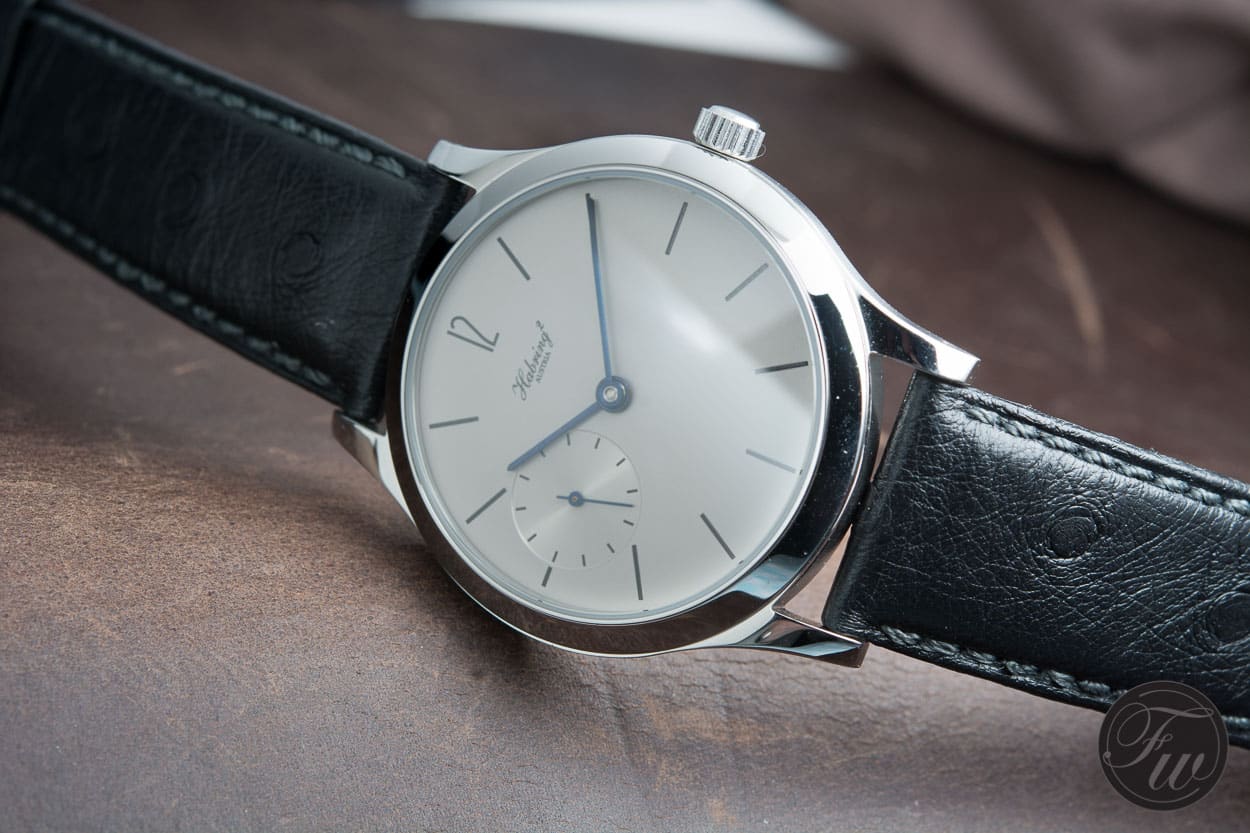 Perhaps the best thing is yet to come, as I didn’t mention the price tag on this Habring2 Felix manufacture timepiece. Where some watch brands are even unable to deliver you a flawlessly working watch with 3rd party movement from ETA or the likes, Maria and Richard Habring decided to put their Habring2 Felix on the market for € 4450 Euro. To be honest, that’s something I didn’t expect when I first looked at the watch and then decided to read all the papers (stating the price) that came with the package. After a short inspection of the watch I really thought this watch would be in a higher price region. The finish is awesome, there are no design flaws and for a small company, they produce their own movements, that won’t be a cheap watch (but my initial guess was still below €8000 Euro).

Not only do you buy a real manufacture watch, you also buy a watch from two nice people that have a visible passion and dedication for what they do and appreciate that you are willing to spend your money on one of their fine timepieces (something big brands are taking for granted more and more as it seems). This is something that goes for a lot of independent brands, but Habring2 is the one that is able to deliver something truly interesting at a very reasonable price point.

Please find more background information and an overview of all their watches on the Habring2 website.