When my interest in mechanical chronographs started somewhere in the late 1990’s, the IWC Pilot Chronograph was quickly identified by myself as one of the nicer chronographs on the market (for me). At the time, the watch came either on a leather strap or on the nicely finished stainless steel bracelet. IWC used a nicely finished ETA/Valjoux 7750 work-horse movement for that model and the dial had that typical 7750 lay-out, sub dials on 12, 9 and 6 o’clock. It was their 39mm reference 3706 model, long-time out of production now. It was followed-up by a 42mm version (reference 3717) with small red seconds hand on 9 o’clock. Today it is a 43mm version (reference 3777) with the typical 3 date aperture frame on 3 o’clock  but still very close to its pre-decessors. IWC decided to expand their collection of IWC Pilot Chronograph watches at some point, with special series like the Spitfire edition, Le Petit Prince edition, Antoine de Saint Exupéry edition and the watch I am reviewing today for you, the Top Gun with ceramic case. There are actually two ceramic Top Gun models, this one in full black as well as the Miramar edition with its anthracite dial and more ‘military’ look.

This watch isn’t a newcomer to the market, as it was already introduced in 2012. However, I never got the opportunity to try one out of a week or so and see what it’s like. Until a few weeks ago that is, when I picked it up in Amsterdam. 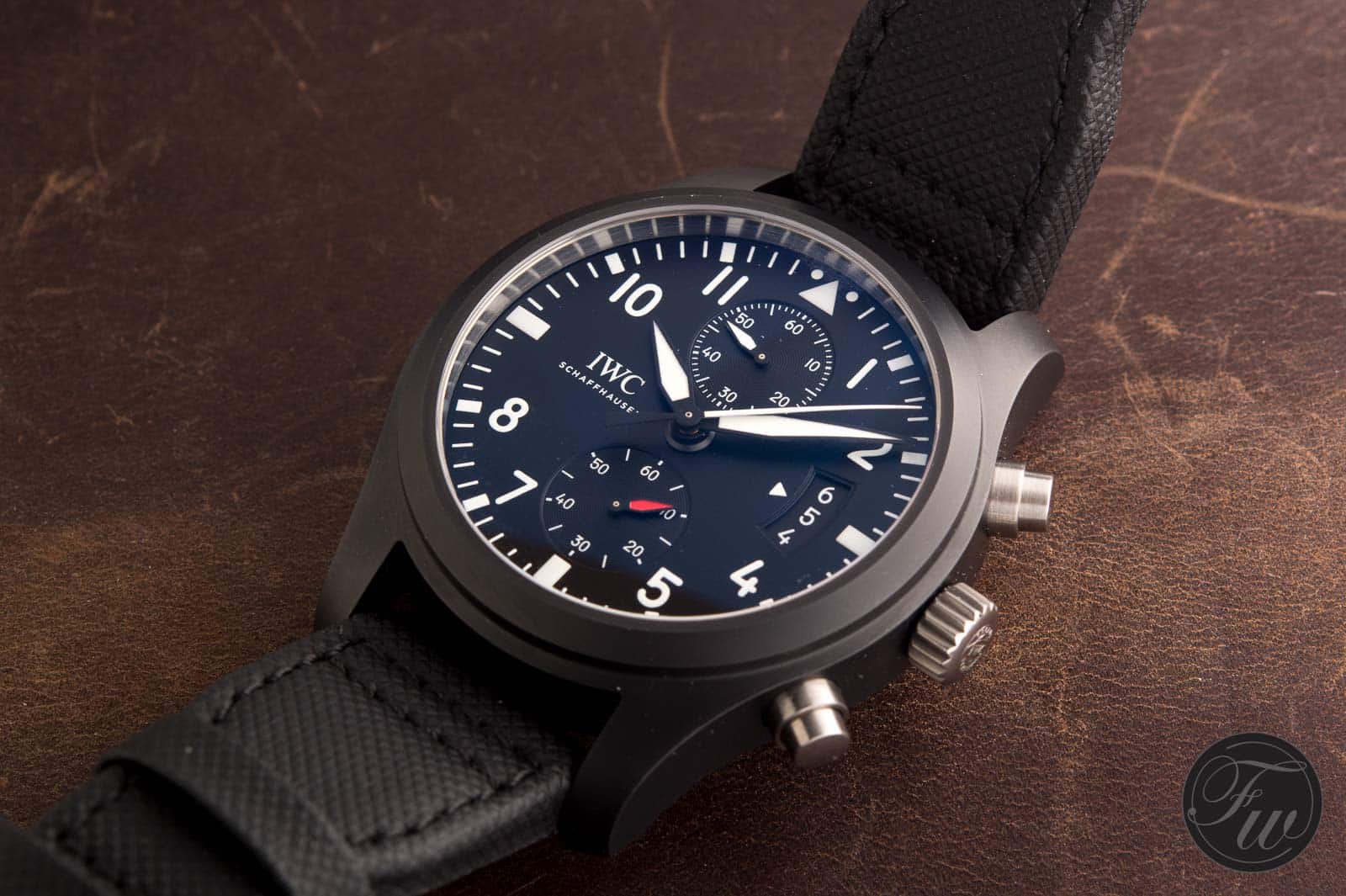 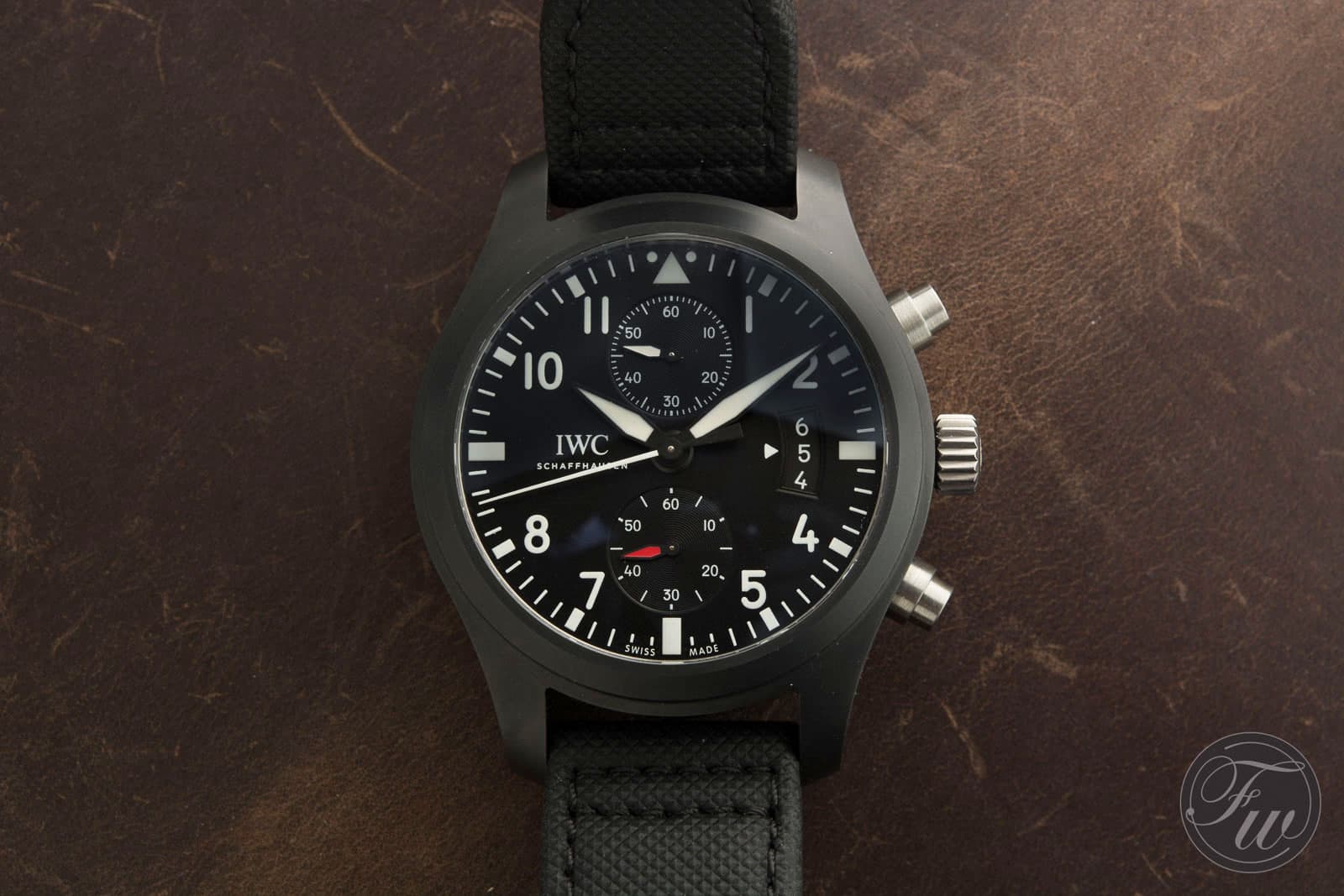 Let me start by telling you that the size of this IWC Pilot Chronograph Top Gun made me a bit hesitant to give it a try; a whopping 46mm diameter. Now, I am by no means a small guy, but 46mm sounds huge. After picking up the watch from Richemont in Amsterdam, I immediately tried it on and although it is certainly not a small watch, it wears more modest than I’d expected. In the meanwhile, I’ve bought myself a 50mm watch and wear it a lot, so specifications on paper with respect to dimensions can be very deceiving. The good part on the size is that the watch is super readable and legible. Although my eyes are still OK-ish, I am wearing glasses every day since a year or so (before that I occasionally wore them when driving my car) and the high contrast dial in combination with the size makes the IWC Pilot Chronograph Top Gun one of the best readable chronographs I’ve ever tried.

The case is made of ceramics and beautifully designed and finished. The influences of the earlier IWC Pilot Chronograph watches are clearly there but have been super-sized. It sits nicely on the wrist and looks – to be honest – expensive. But I guess that is what most buyers of these watches expect it to be.

The black soft strap the watch comes on is very comfortable and feels like high quality. If I am not mistaken the strap I had for my IWC Ingenieur 3227 a few years ago was made of a similar material. Although the 39mm IWC Pilot Chronograph reference 3707 I mentioned above also came with a metal bracelet (optional), I always considered the IWC Pilot watches to belong on a leather strap, NATO strap or something like the IWC soft strap. In my opinion the stainless steel bracelet was beautiful, but perhaps a bit too “smooth” for a real tool watch like the Pilot Chronograph. The soft strap comes with an IWC folding clasp that works perfectly. 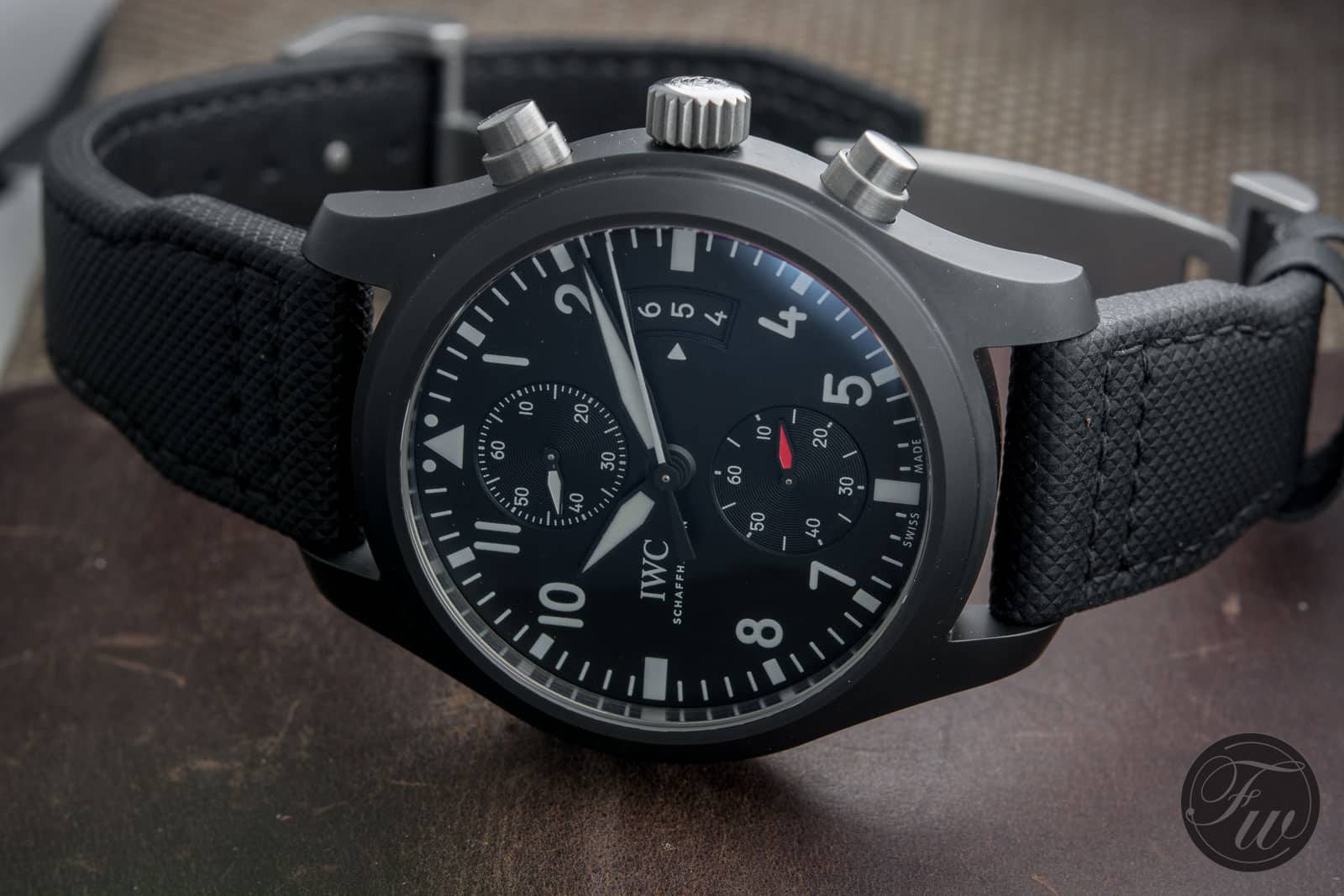 As I already mentioned, the black dial and white hands give a great contrast. The time is readable under almost all circumstances, which is exactly the point of a tool – in this case pilot’s – watch. The dial lay-out is a bit different from the other IWC Pilot Chronographs, as this model uses the in-house IWC 89365 caliber chronograph movement. This means the watch has two registers, located at 12 and 6 o’clock. On 9 o’clock you’ll see the brand’s logo in white and on 3 o’clock the 3 dates aperture. The large aperture is not for everyone I’ve noticed when reading some forum comments on this watch somewhere, and I am still a bit in doubt about it myself as well, but when the large minute hands indicates 15 minutes, you’ll be able to read today’s date by seeing the date before & after.

The sub dials at 12 and 6 o’clock have nice circular grain and the small seconds hand has been filled with red color. The hands themselves are black, ensuring the high contrast. 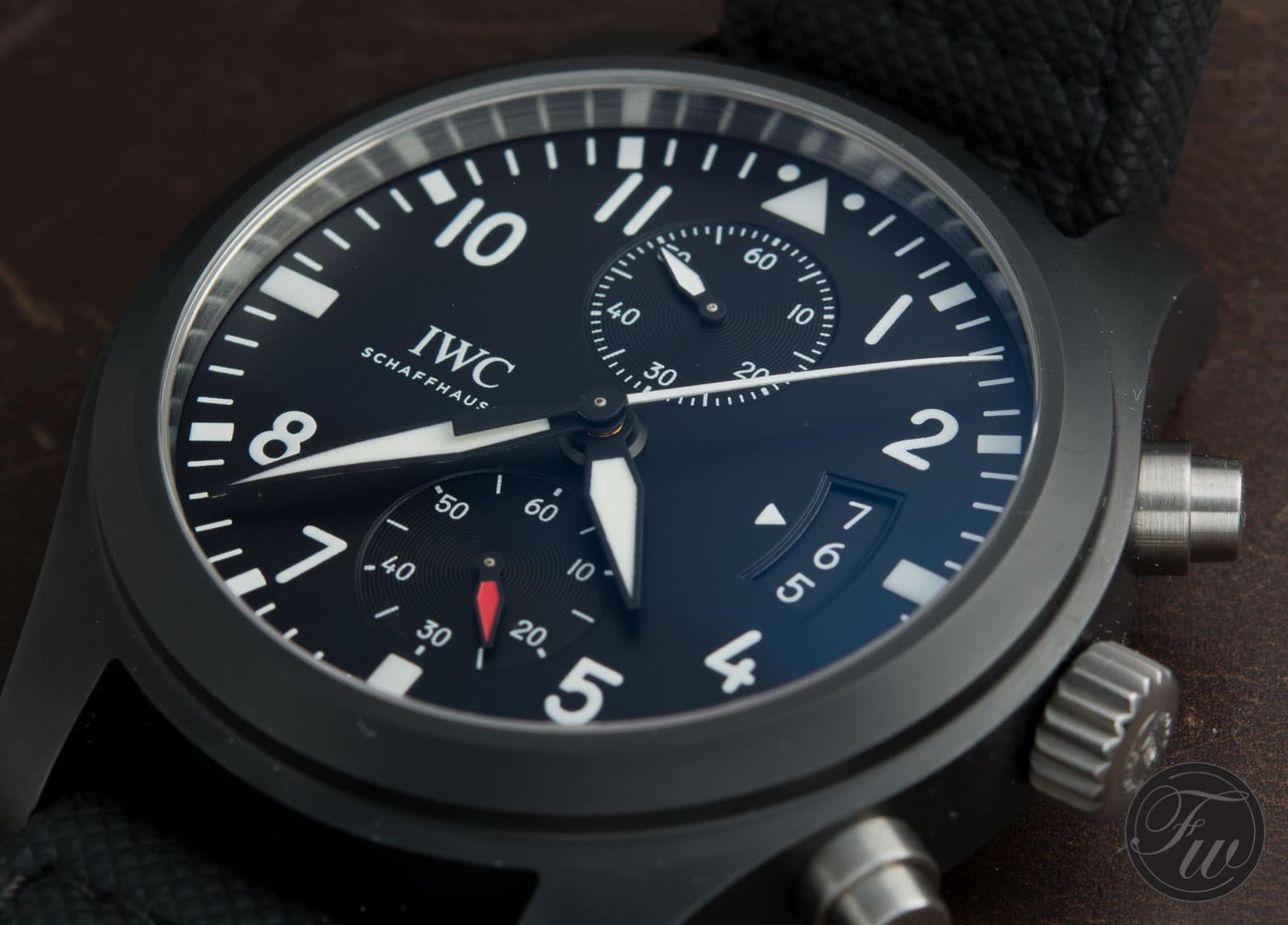 IWC does not use a modified ETA 7750 for these watches, but an in-house developed 89365 chronograph movement instead. As you can see on the dial, there is no hour counter so it’s only minutes and seconds that can be measured. However, the watch does feature a flyback function. Aside from the normal start/stop and reset procedure, you can also quickly restart the chronograph by simply pressing the lower pusher at 4 o’clock. This saves you two pushes (stop and reset) if you need to restart the chronograph quickly again. The self-winding movement has a 68 hour power-reserve, so you can use another watch on Saturday and Sunday if you want.  Of course, IWC chose to use a column wheel mechanism for their own in-house manufactured chronograph movement.

The action on the chronograph is precise and didn’t fail on me during use. The titanium pushers (and crown) are easy to operate and feel very solid. No play or whatsoever. 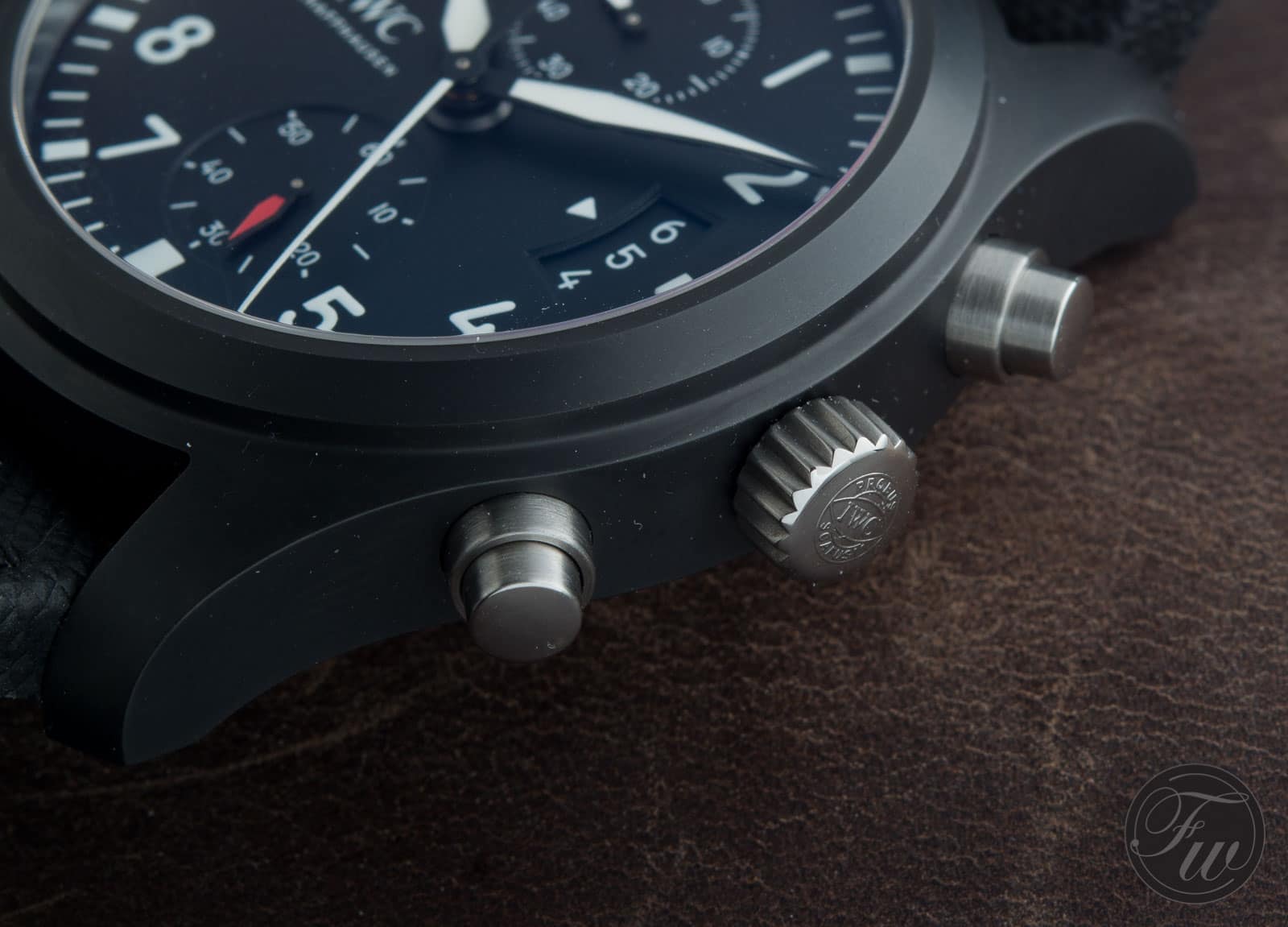 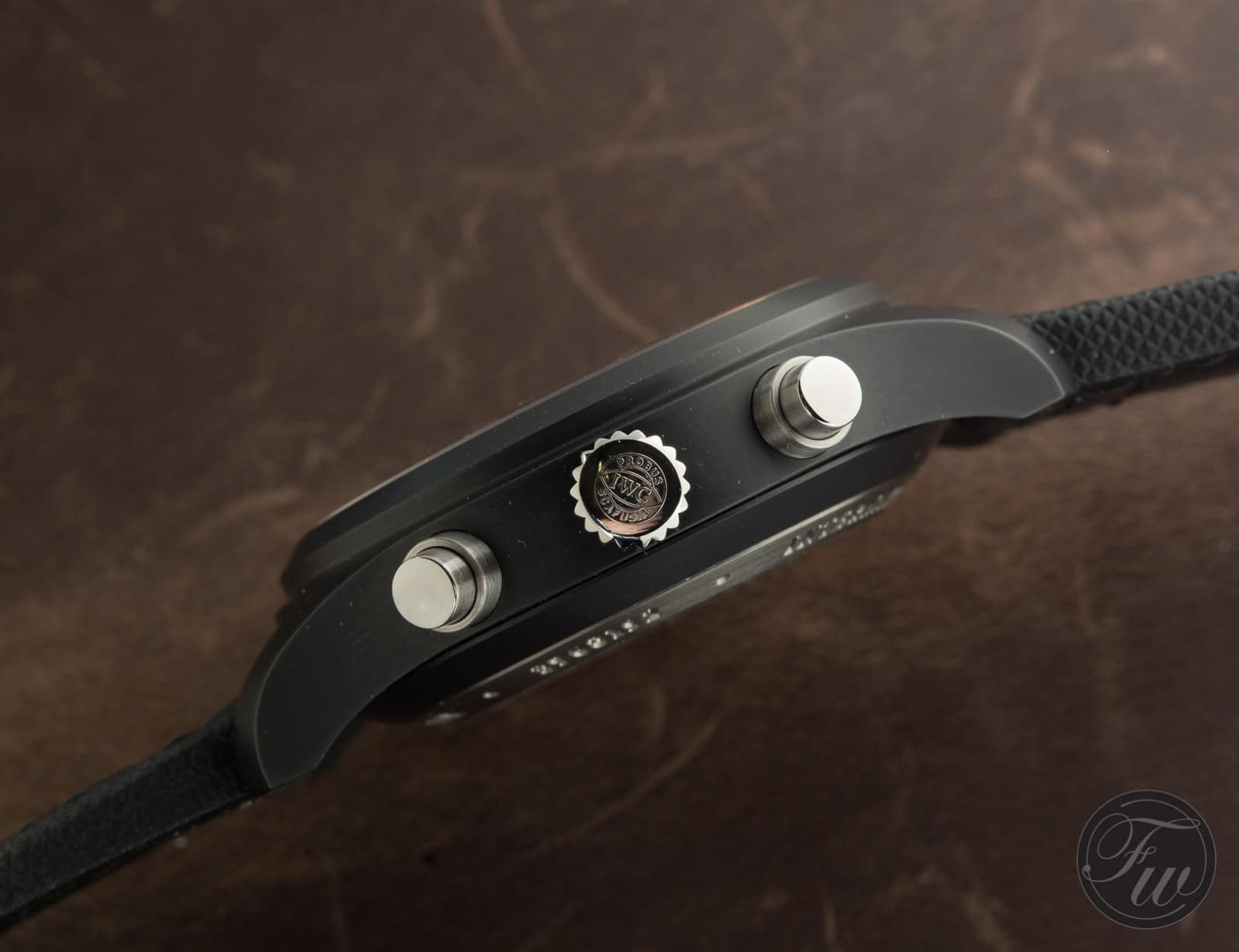 The caseback of the IWC Pilot Chronograph is the only thing that indicates we are talking about a Top Gun timepiece here. This watch, together with the Miramar edition, pays tribute to the elite pilot team from the United States. A few years ago, in 2012, when these watches were introduced, we had a thorough introduction on Top Gun by one of their pilots who came over to The Netherlands to visit. Click here for that report. I am unsure whether Top Gun pilot’s are issued with these watches to be honest. I assume that it is a commemorative Top Gun watch and not an official issued watch. So if they like it, they can buy one, like you and me.

The titanium caseback shows the Top Gun logo and has the necessary engravings. No transparent caseback, which – as loyal readers know – I don’t really mind. The finish on the caseback is nicely done and between that and the Top Gun medallion, you see the round incisions to be used by IWC watchmakers to open and close the caseback. 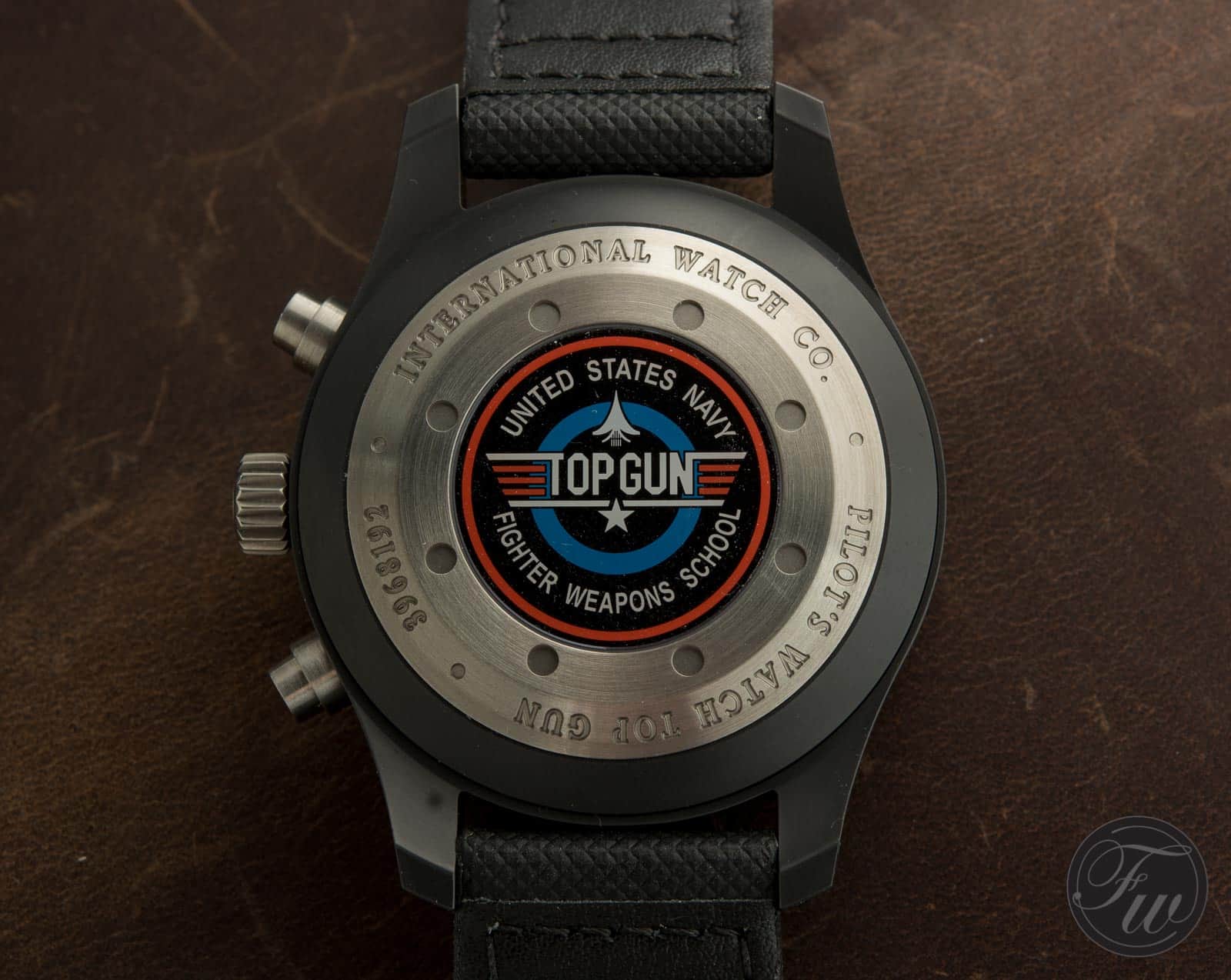 Originally a tool watch, but now brought to the market as a life style pilot’s watch. No matter how the IWC Pilot’s Chronograph watch of today is marketed, it is a very well made and finished timepiece. Personally, I am not that sensitive for the Top Gun batch but I can imagine that there are a lot of people out there who have some kind of relationship or admiration for this team of fighter pilots. I think that IWC did a nice job not too make this piece ‘Top Gun’ all-over, like some other brands like to do with commemorative watches. Only the caseback reveals the Top Gun part of the watch. If you leave the medallion out (and it is nice looking nevertheless by the way), what’s left is an awesome chronograph made of ceramics and titanium.

The flyback function of the movement is a very welcome complication and operating the watch is smooth like butter. The soft strap makes the 46mm case wear quite comfortable on the wrist, although this size is probably still not for everyone. Make sure you give it a try before buying it.

I do have to admit that this watch didn’t give me that same thrill as the original IWC Pilot Chronograph, although it is a big step forward from that relatively small 39mm watch with Valjoux movement. But I am very sure that the old reference I am talking about doesn’t thrill many of today’s buyers of a Pilot Chronograph like this Top Gun edition. Anyways, the IWC Pilot Chronograph Top Gun watch is impressive, not only due to its size but also by the level of finish of all parts and its legibility.

The list price of this IWC Pilot Chronograph Top Gun is €12000 Euro (including VAT). This opens up an entire range of similar chronographs from IWC but also from other interesting brands. If you narrow it down to ceramic chronographs only (with in-house developed movement), there are just a few serious competitors there.

More information can be found on the official IWC website.

Hot Topics
Everyone Needs At Least One Of These Iconic Dress Watches In Their Collection — Top Picks From Cartier, Rolex, Grand Seiko, And More
115 comments
The Omega × Swatch Speedmaster MoonSwatch Six Months On — Is The Hype Still Alive?
85 comments
Introducing: The New Omega Speedmaster X-33 Marstimer
80 comments
The Best Of The Bunch — Meet The New Omega Speedmaster ’57 In Blue
72 comments
Not Every Watch Enthusiast Needs To Own A Rolex
70 comments
Popular
(From The Archives) Shut Up & Read The Truth About Cartier Watches
George Cramer
21
You Asked Us: Tissot Powermatic 80 Seastar 1000 or Longines HydroConquest
Robert-Jan Broer
19
BaselWorld 2018: Certina DS PH200M
Balazs Ferenczi
0