According to Laco, only flying is better.
Gerard Nijenbrinks
comments 10
Share

We were pleased to get our hands on one of just 200 pieces of the Laco München Pilot Chronograph. With an authentic instrument look, Laco pays tribute to the historical observation watches from the 1940s. It is, pleasingly, a watch with the classic Laco Flieger appearance and with the bonus functionality of a chronograph.

Laco introduced this exclusive chronograph model at end of 2020. It was initially made available to the brand’s existing customers during a special pre-sale period. Watches ordered during this period were entitled to a free overhaul service within five years of purchasing. I haven’t seen this kind of premium before, but I think it is a really nice gesture to make to loyal customers. 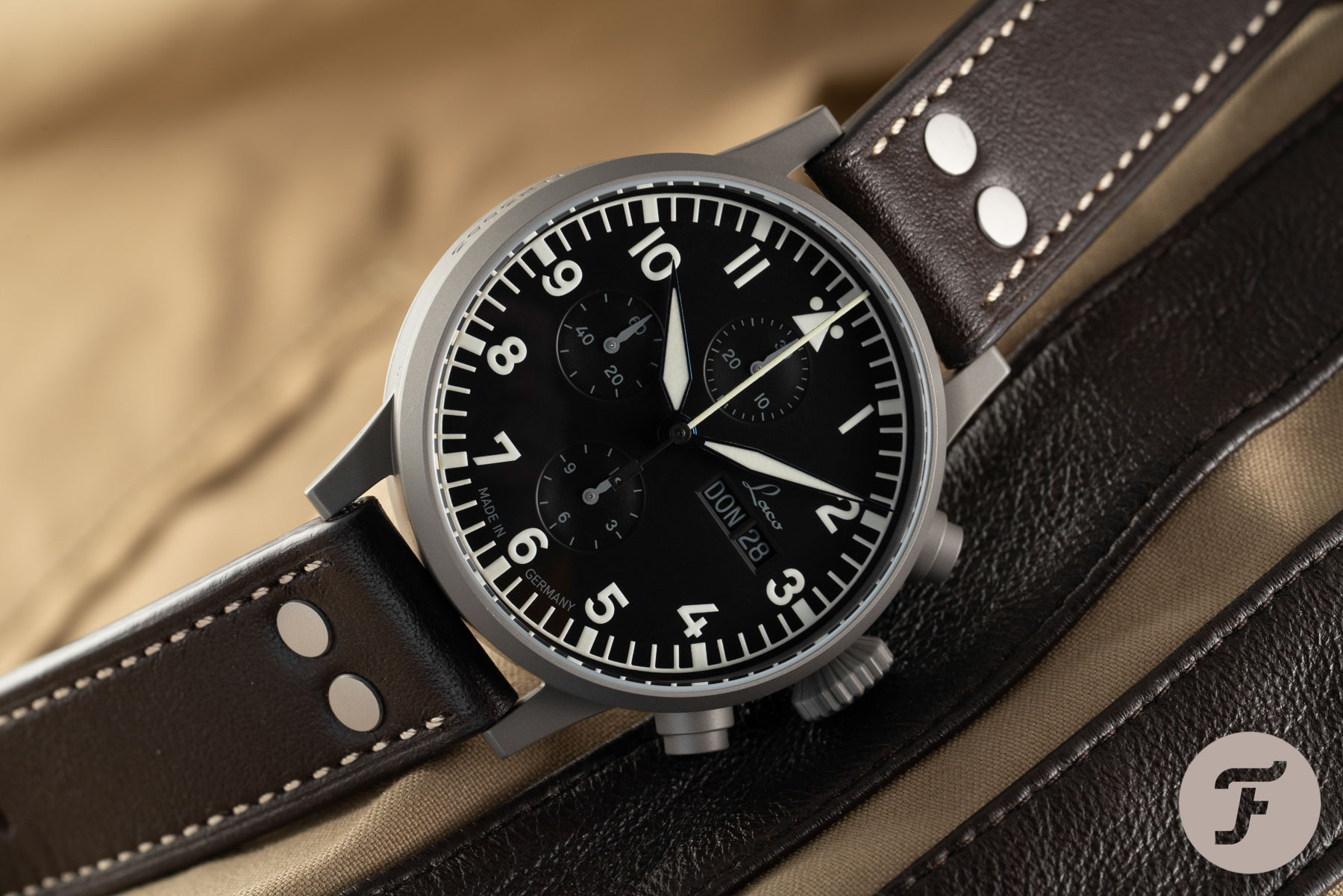 Strictly 200 pieces will be — or have already been — produced. One might argue that it’s a pity that such an attractive chronograph like the München doesn’t become a part of the regular Laco collection. But hey, that’s how brands roll nowadays — initiating a desire to sell a certain amount of watches in a delimited period of time. By the way, at the time of writing, a few of the 200 pieces of the Laco München Pilot Chronographs are still available for sale. 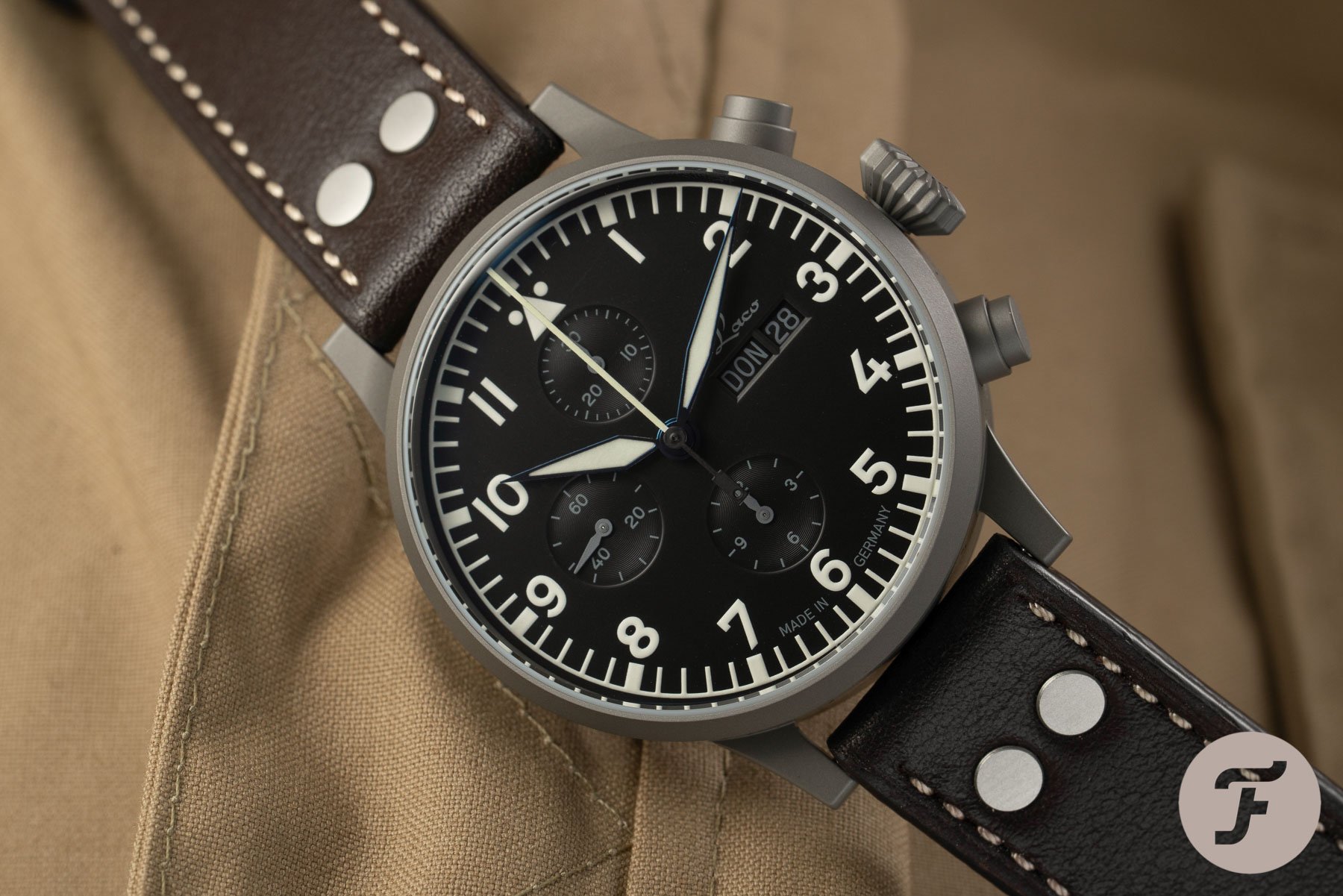 At first look, the München Chronograph really appears like a regular classic three-handed pilot watch. Although, rather quickly, it becomes apparent that the large second-hand isn’t moving. And, of course, that there’s not only the winding/setting crown on the right side of the watch but two additional pushers as well. Upon the second glance, this Laco reveals itself as a chronograph. Laco managed to obtain this dual image by using optically withdrawn gray printing and hands for the chronograph. I stole this term from Sinn and translated it from their German optisch zurückgenommen indication used in the EZM series, in case anyone was wondering where my spike in creativity had originated from.

Like all pilot watches in the current line-up, Laco names this chronograph after a German city with an airport. In this case — obviously — München. Laco’s history lies in a company named Lacher & Co. Founded in 1925, they became one of the most important in the German Pforzheim region. Lacher & Co. was one of five manufacturers in that area to produce reliable pilot watches. 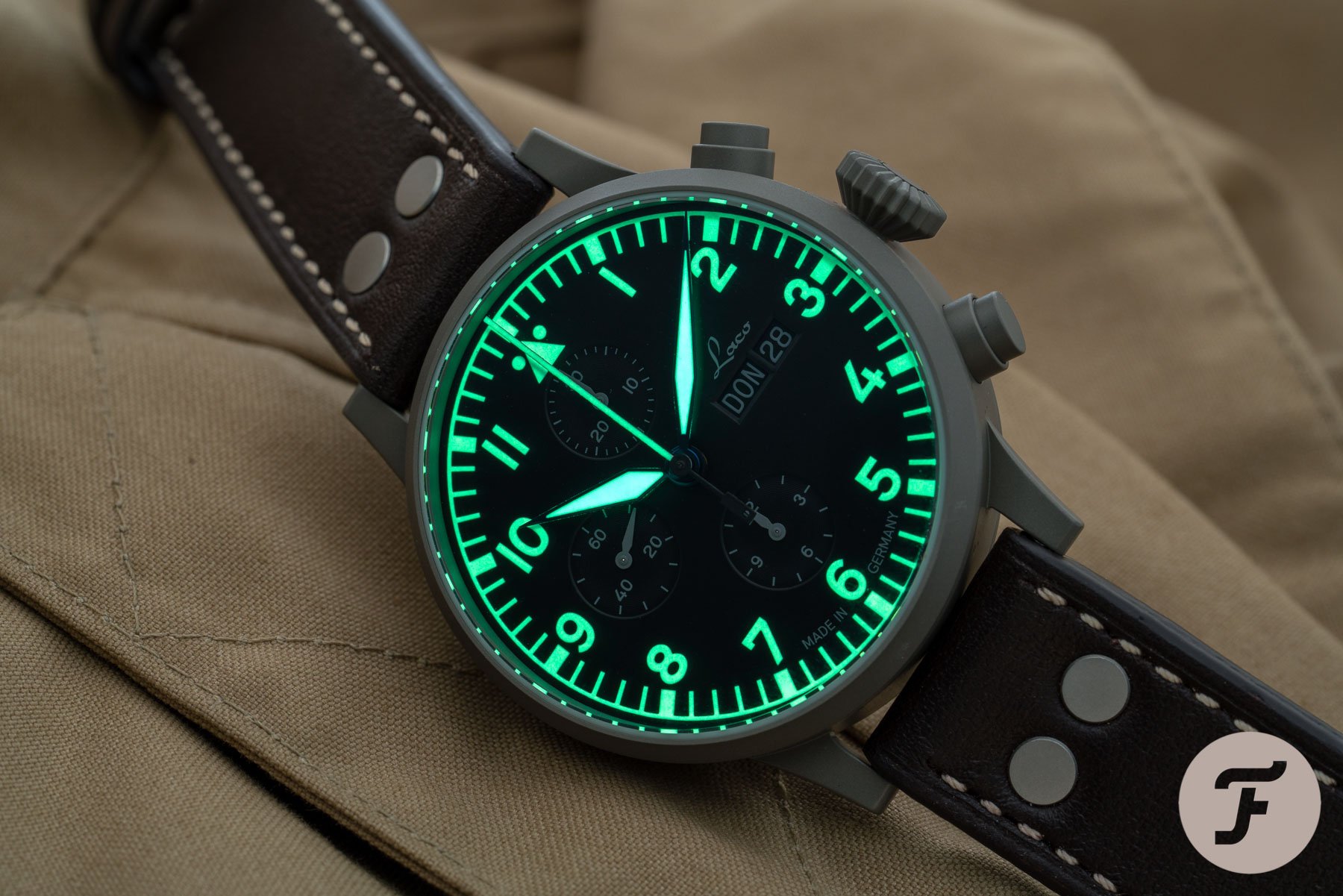 The Laco München, how does it wear?

Okay. This thing looks good. But how does it wear? With its rather cylindrical shape, a diameter of 42.3mm, and height of 14.75 mm, the Laco München is quite a statement. But I won’t say it’s excessive; it’s very much the statement you’d expect from a classic pilot’s watch. Laco indicates a lug-to-lug distance of 50 mm. However, the push-pin-to-push-pin distance (the measurement that determines the point where a strap bends downward to your wrist) is only 45 mm. And because of this, the watch comfortably fits my 17.5–18cm diameter wrist. 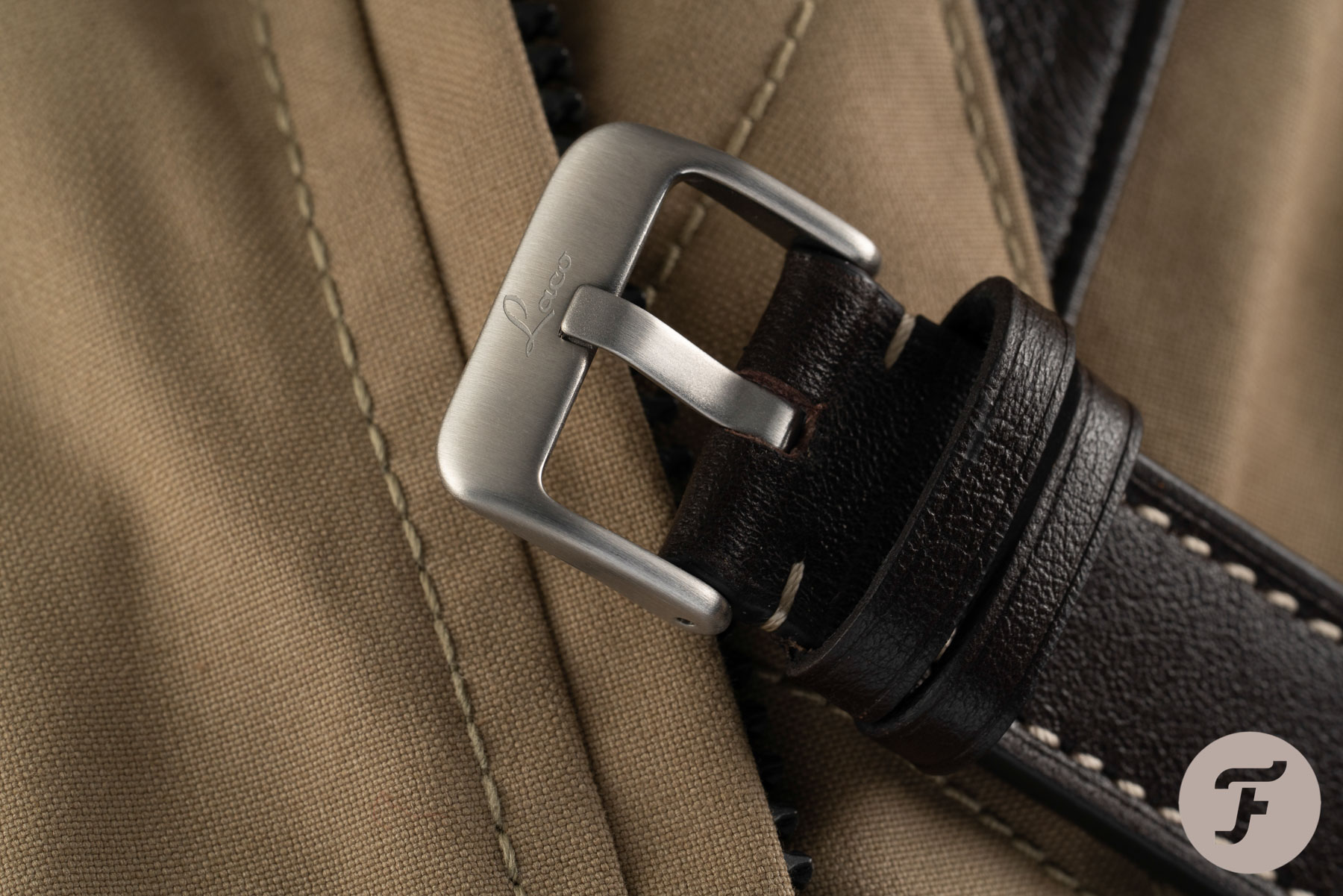 Talking about the strap, it’s seriously fat. This brown leather pilot style strap is over 4mm thick! It also features two rivets on each side towards the lugs. The strap width is a convenient 20 mm. That’s handy if you want to change the strap for anything else. Laco offers some nice straps, but in 20 mm, there are a lot of after-market straps to choose from as well.

It has to be said that the Laco strap that comes with the watch is, despite its thickness, extremely soft and comfortable. It is far more pliant and wearable than one might expect when looking at pictures. There’s a regular pin buckle in brushed stainless steel, unfortunately not exactly matching the dark-gray shot-blasted material used for the watch’s casing. 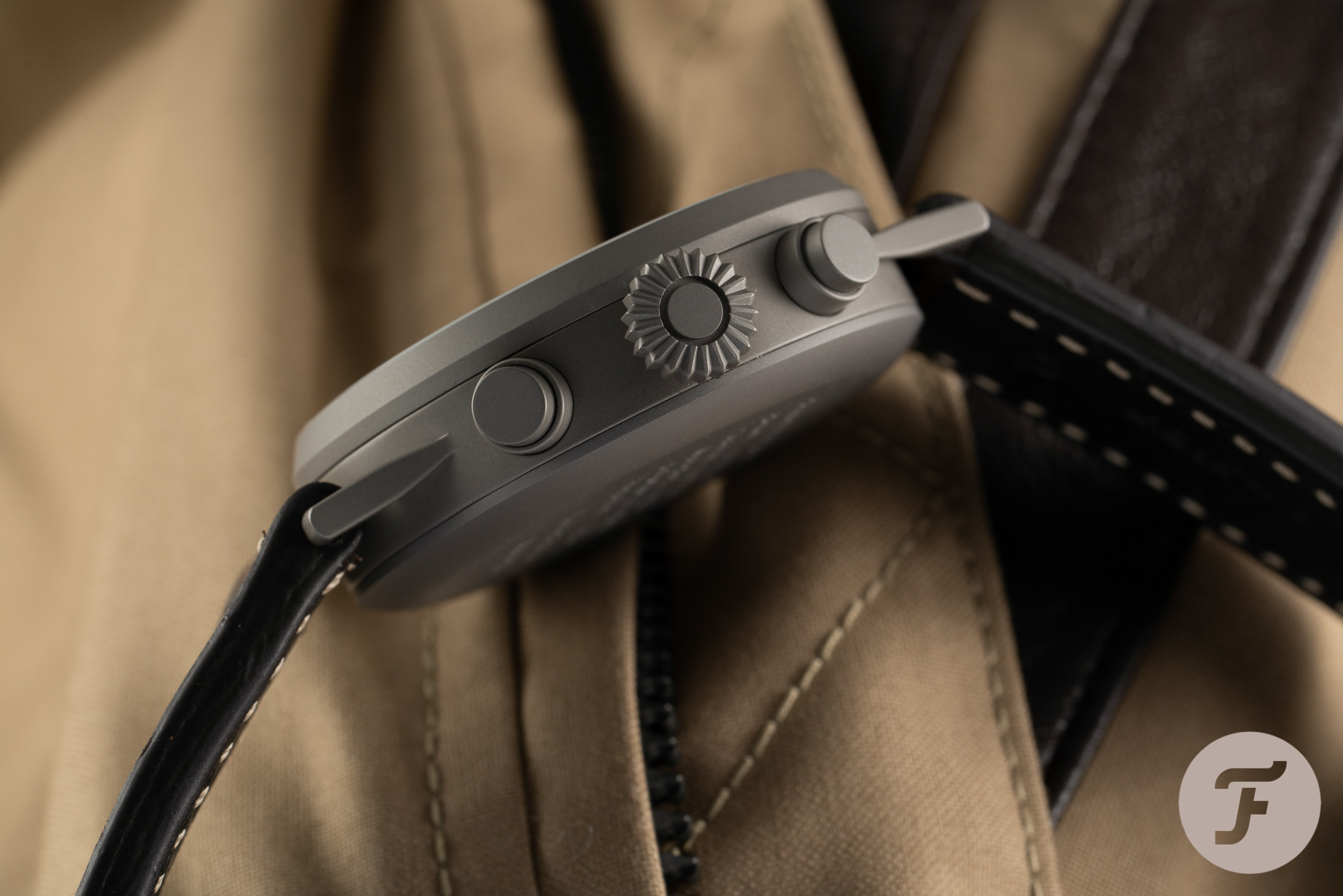 I mentioned the case’s dimensions, and now the shot-blasted finish as well. This style of finishing produces a dark-gray surface. While I was writing one of my earlier Laco articles, I learned that this dark-gray appearance is caused by titanium-sand-blasting. Using this type of sand (or “dust”), gives the case its dark, almost titanium-like, finish. I like it, and think it’s very appropriate for this type of watch. 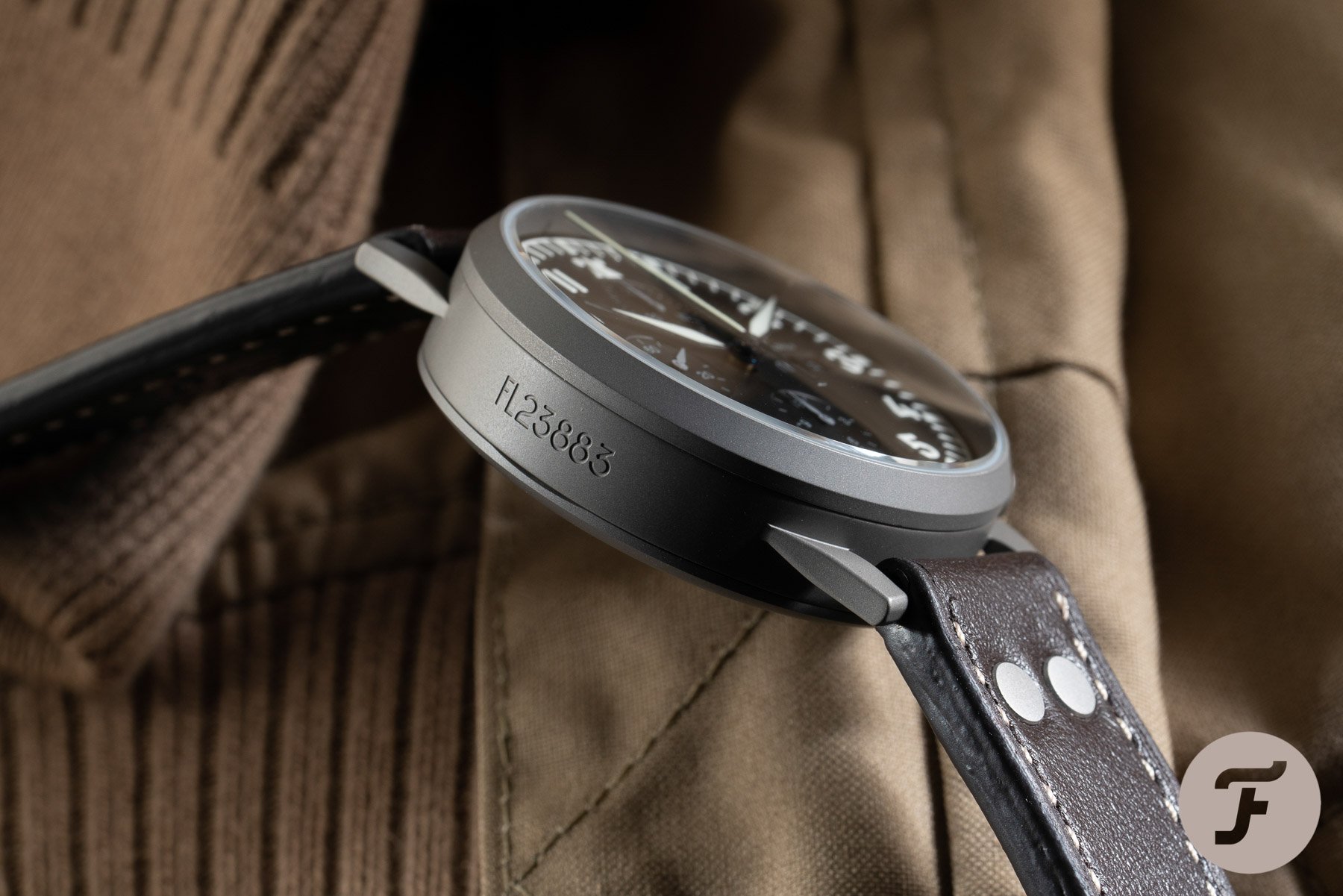 At one side of the case — at 3 o’clock — there’s an FL 23883 marking engraved. We’ll find this same marking on the solid case back in a column with some more markings. They’re based on historical Luftwaffe Contract Numbers and say something about the instrument we’re looking at. 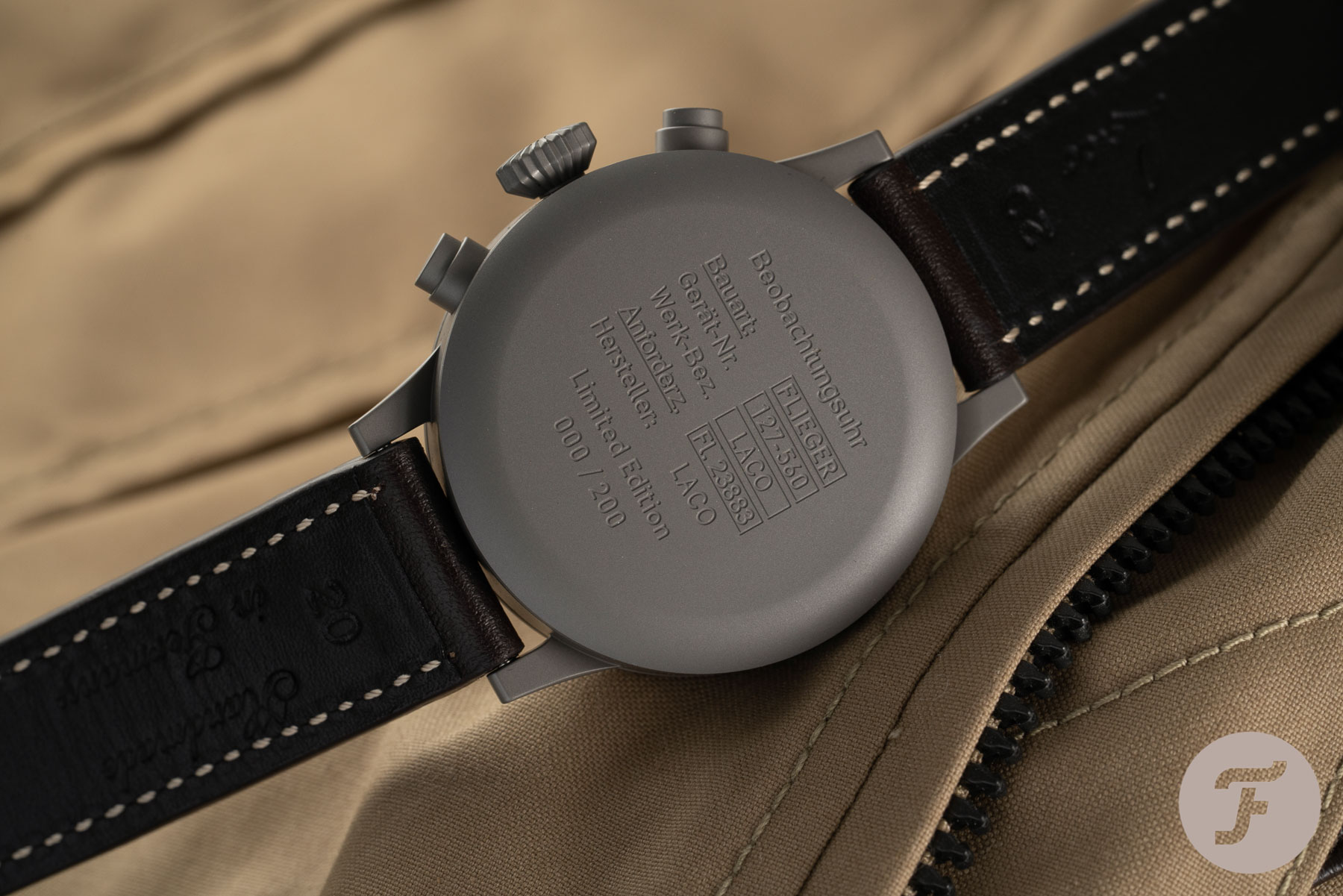 Starting with the function of the instrument, Beobachtungsuhr, which strictly translated means observation watch. The Bauart, or design-type in English, obviously is a Flieger and translates to pilot. There are Werk-Bez., or model number, the manufacturer (Laco), plus the Anforderz. FL 23883 that I mentioned already and is found on the side of the case as well. By the way, I noticed that Laco uses the same marking and numbers on other models, like the Dortmund and Memmingen.

The München Chronograph dial and hands

A starring role of the Laco München Chronograph goes to its dial and hands. They give the watch a dual appearance. The dial is as matte-black as can be. It is the perfect background for a pilot’s instrument. The hour and minute hands are made in era-appropriate blued steel and filled with Superluminova C3. The straight large second hand of the chronograph is painted with Superluminova as well, just like the minute indexes and hour numerals.

… a chronograph for people with good eyesight

But as for the rest — the chronograph minute and hour registers, plus the small seconds-register — everything is painted in non-luminous gray, and thus hardly visible. Even the Laco brand name and the day and date indication are in this same gray color. The (rather dark ) gray paint means these elements are hardly visible at first glance. This really helps clean up the dial and makes it more legible. At the same time, offering a chronograph function if you really want to use that (and have good eyesight). I think that the wrist shot below, taken in natural light, makes it all clear. 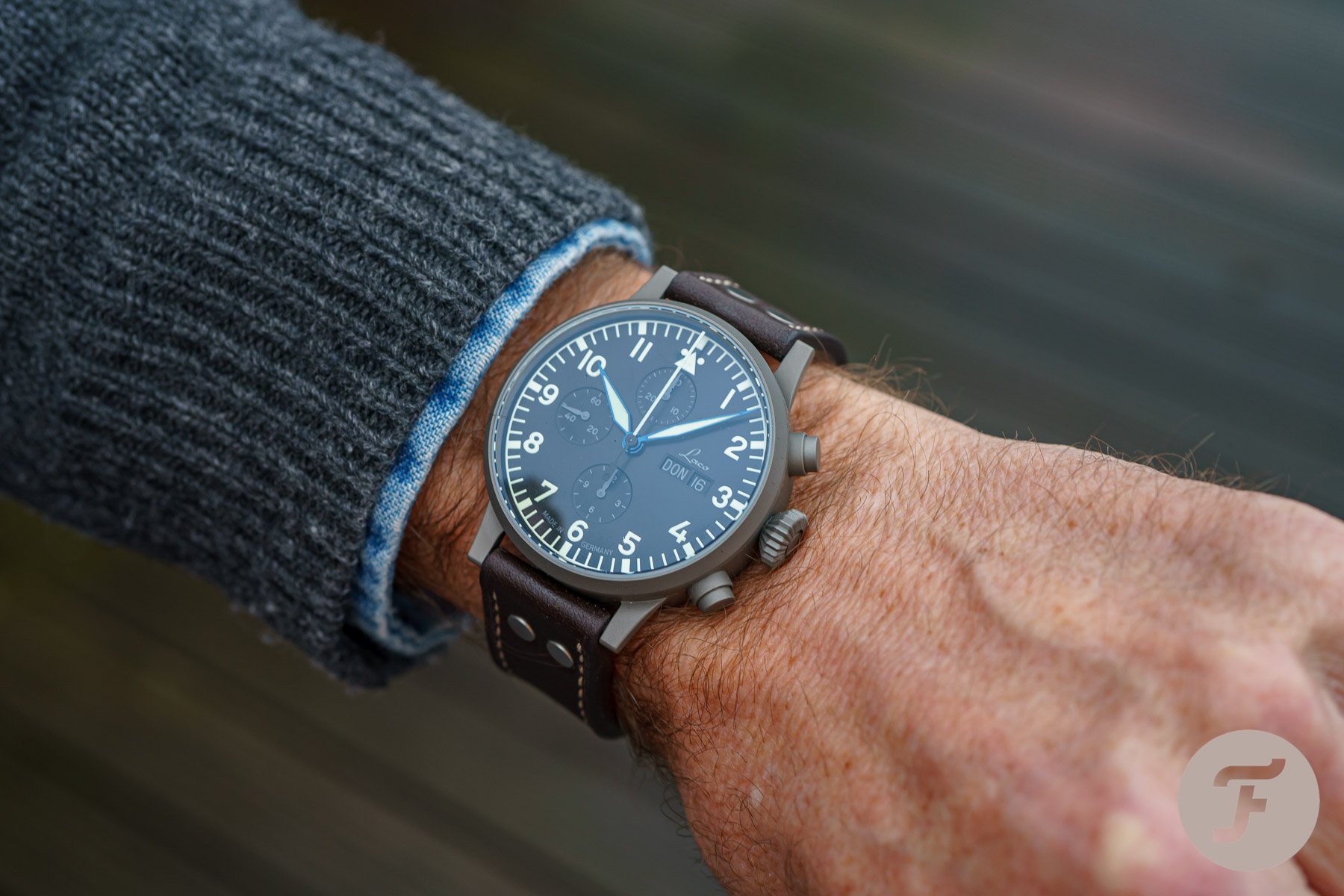 The Laco caliber 50 that powers the München Chronograph, is based on the trusty Valjoux 7750 in Elaboré grade. Elaboré is Laco’s standard, but if that isn’t good enough for you, the brand offers the Valjoux 7750 in Top grade as well. It’ll set you back an extra €130. While the slightly domed standard sapphire crystal received an anti-reflective treatment inside, a dual-sided coated sapphire glass is available as well. The price tag? Another €130. Of course, a watch Made in Germany gets a German day-indication disc. But if your German is a bit rusty, you can always opt for an English one for €70 extra. 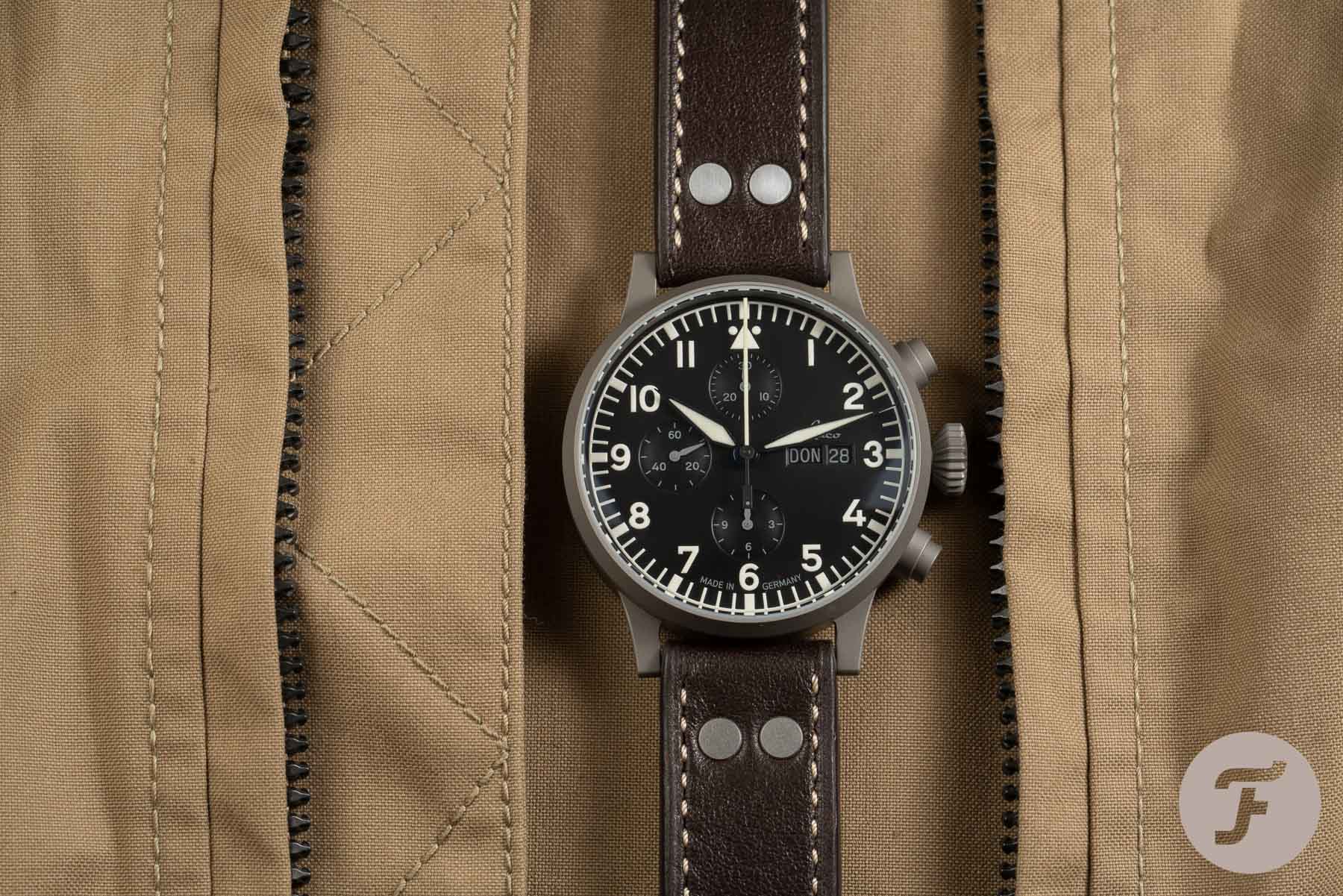 For € 1,990, the Laco München Chronograph Limited Edition makes for a solid purchase. The technical specifications do not disappoint, and if the style of a historic pilot watch attracts you, I would definitely consider this chronograph. Even as a general-purpose or daily watch, it’s an attractive companion. I enjoyed wearing the watch and found it very comfortable to wear. Every time I looked at it, I was positively surprised by how easy to read it was. The fact that the large chronograph seconds-hand is stationary at 12 sometimes distracts a bit. But that’s easily solved by having the chronograph permanently running.

Additional information and the possibility to order (as long as stock lasts) are found on the Laco website. You’ll find me @gerardnijenbrinks