Making your mark in an overcrowded corner of any market is hard work. It takes vision. It takes tenacity. And perhaps more than anything, it takes an unshakable belief in your message and that your target demographic will latch onto it and carry it home on your behalf. During any endeavor of this nature, you will meet with strong resistance. You will meet with naysayers, detractors, rivals who may be jealous. All of these people will tell you, “No, don’t do it — it is a fool’s errand.” If you make it through that gauntlet, you’ve got a shot at success. But does the Bohen Dive Watch have what it takes to make it over the line?

This has been a long journey. While it may sound odd to look at “missed” deadlines as a positive thing, when it comes to getting the product right, they certainly can be. And in this day and age, the delivery timelines of pretty much every brand we work with are up in the air thanks to the ongoing COVID-19 pandemic. Bohen, a small, first-time brand that will live or die on the execution of its founder’s vision, knows that all too well. We’d originally planned to put this watch through its paces six months ago until the factory producing the model’s end-links (seriously) ground to a shuddering halt. 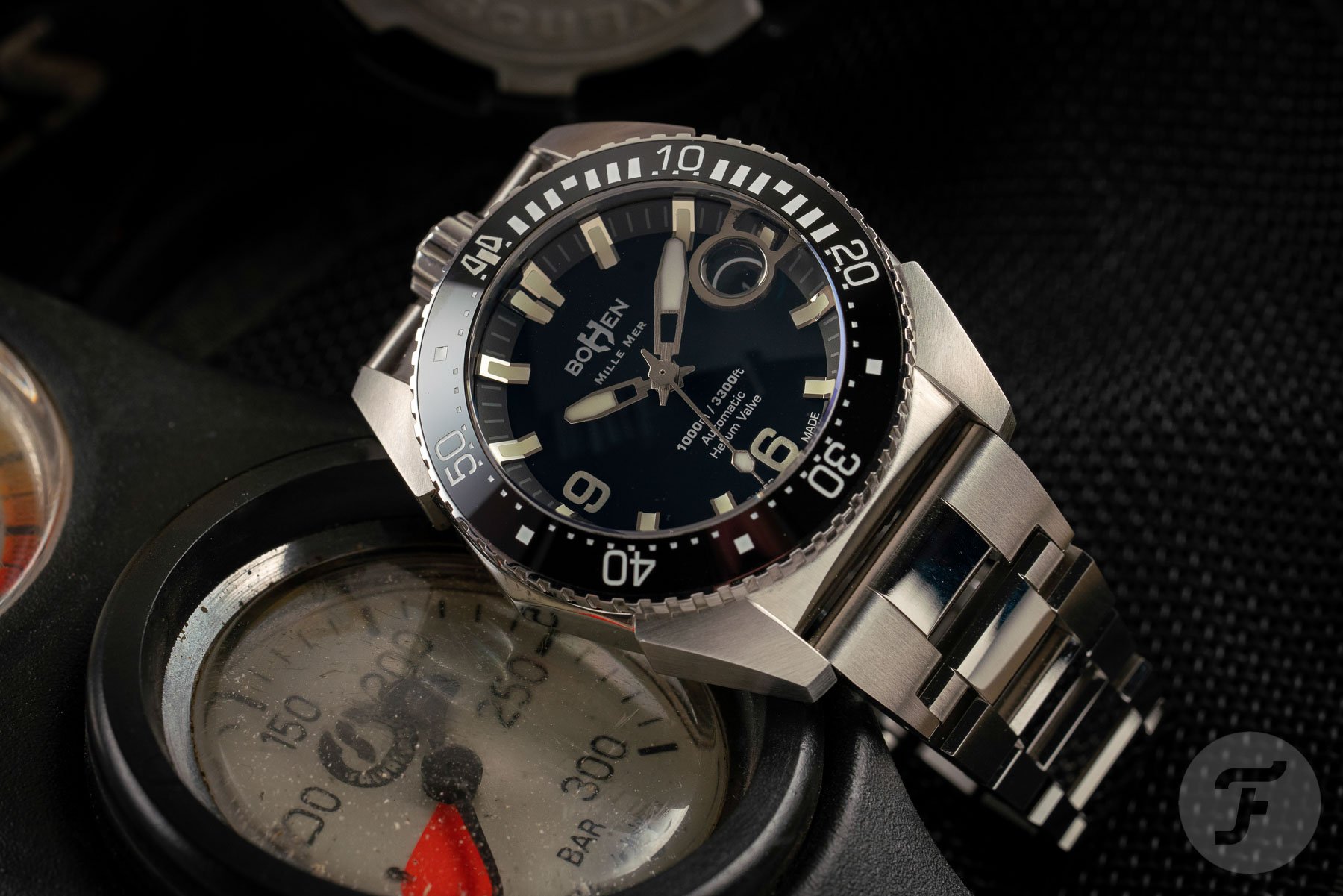 At first, Bohen was torn. The brand considered sending what it had already, but I advised against it. In times gone by, we frequently reviewed crowd-funded brands’ pre-production samples until I realized that was entirely less than useful for our audience. A brand can promise to make up for all identified ills prior to launch (I mean, why wouldn’t they?), but in our position of responsibility, we have to be able to comment on what is, rather than what might be. 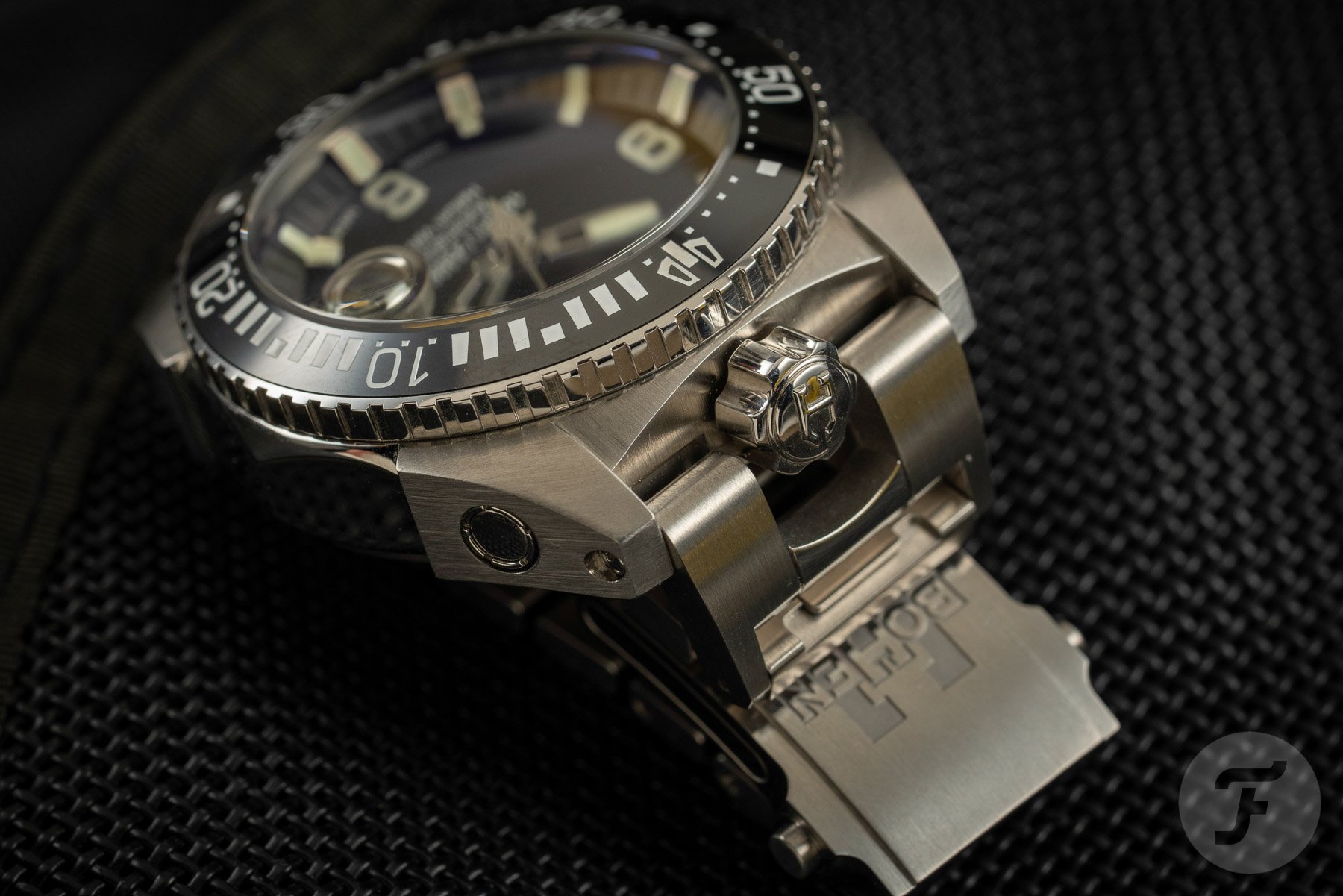 It sounds harsh, I know. I’ve had many new brand owners wailing on me for this decision. I stand by it, however. Too many times, I’ve seen horror shows come to life on the back of misleading or downright inaccurate reviews. I wasn’t going to add to that morass of inaccuracies, so here we are. We waited, and now I have the real deal on my wrist. What I see here is what you will get. So let’s find out if it deserves your hard-earned cash. 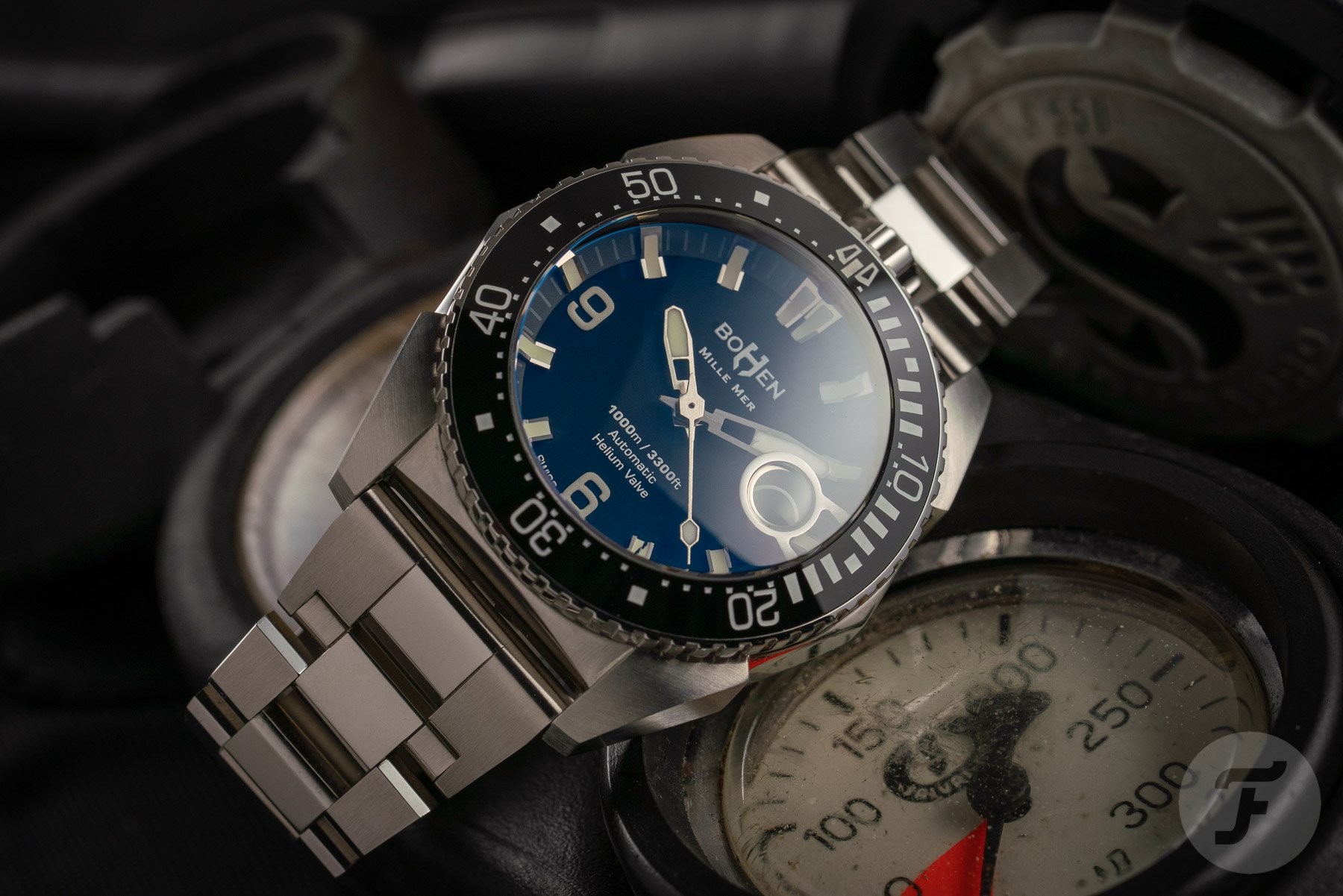 The monkey on the back of the elephant in the room

You’ve got to love a busted idiom, right? What do I mean by this “monkey on the back of the elephant in the room” nonsense? Well, the elephant in the room is the price (€1,659) for a watch powered by a Soprod M1000 caliber. Now that’s a much more interesting caliber than a bog-standard Sellita but it doesn’t vault it into the next level like something proprietary would. Bohen communicates this caliber as Soprod’s “anti-magnetic caliber”, which the brand further protects by wrapping in a soft iron cage and closing the case back.

The monkey on the back of that elephant is that despite this model being a production-grade sample, there is little chance you will get to try it on before it launches to see if it’s worth it regardless. So you’ll have to just go with your gut a little bit.

You know my take on these products. There’s nothing necessarily wrong with that movement choice assuming the right amount of capital has been poured into the case and bracelet execution, not to mention the general aesthetic of the watch. Bohen claims that if this watch were distributed through regular retail channels it would command a price of €8,300. The cleanest and most direct example I offer here is Laventure. The early models from that brand now seem like a steal given how quickly it has grown in the estimation of those within the industry and more privy to what goes on behind the curtain. But there’s no denying that the increase in retail price raised the eyebrows of anyone wont to work with spec sheets alone. 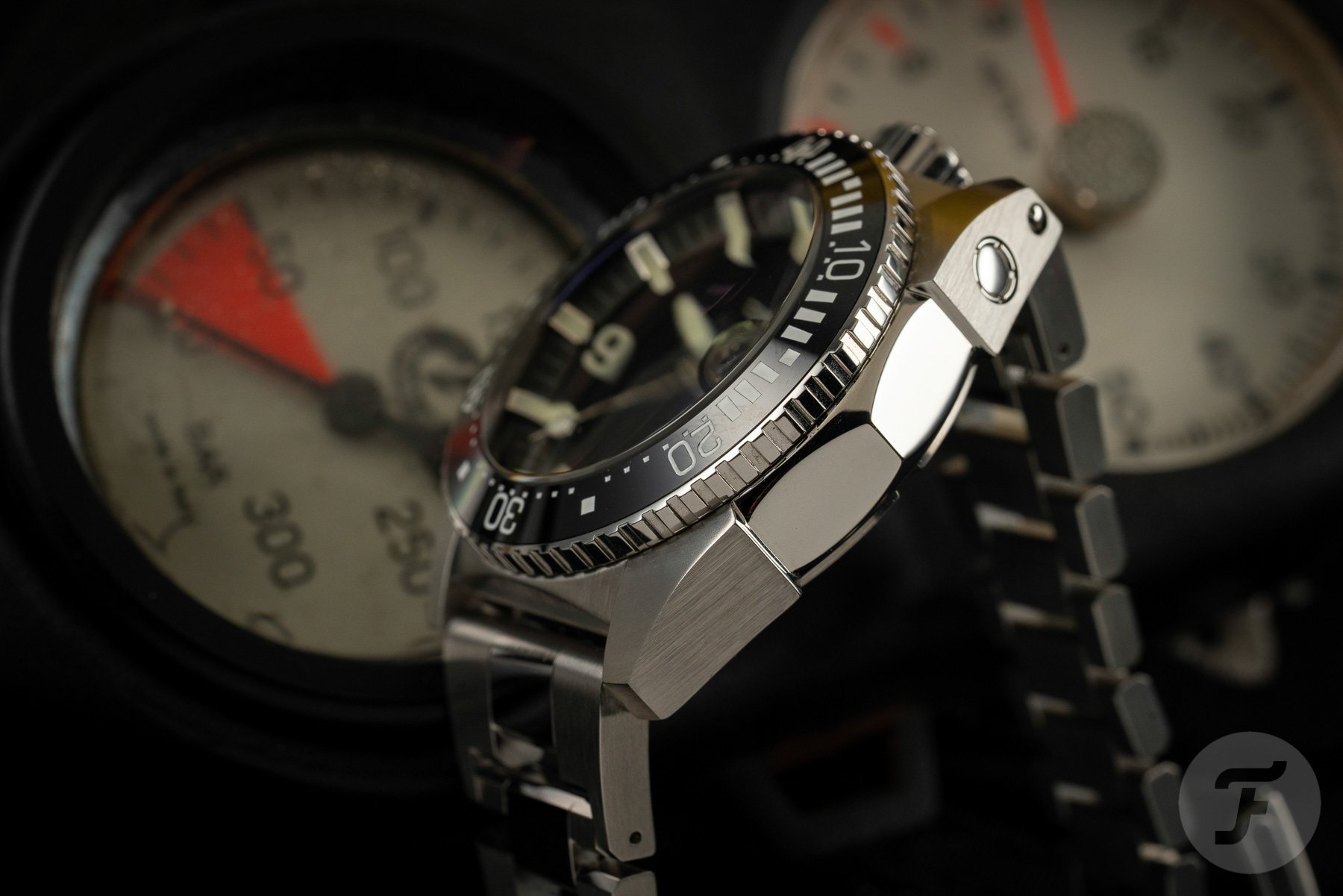 Currently, there are 649 Laventure watches “in existence,” with the bulk of the last 99 yet to be delivered. That means you’ve got a significantly better chance of seeing one in the wild than you have with this Bohen (which boasts a grand total of two production-grade prototypes behind closed doors). Given that, I’m going to use the Laventure Sous-Marine as a baseline comparison to give you an idea of how well the Bohen Dive Watch really stacks up against its kind of like-for-like competition. 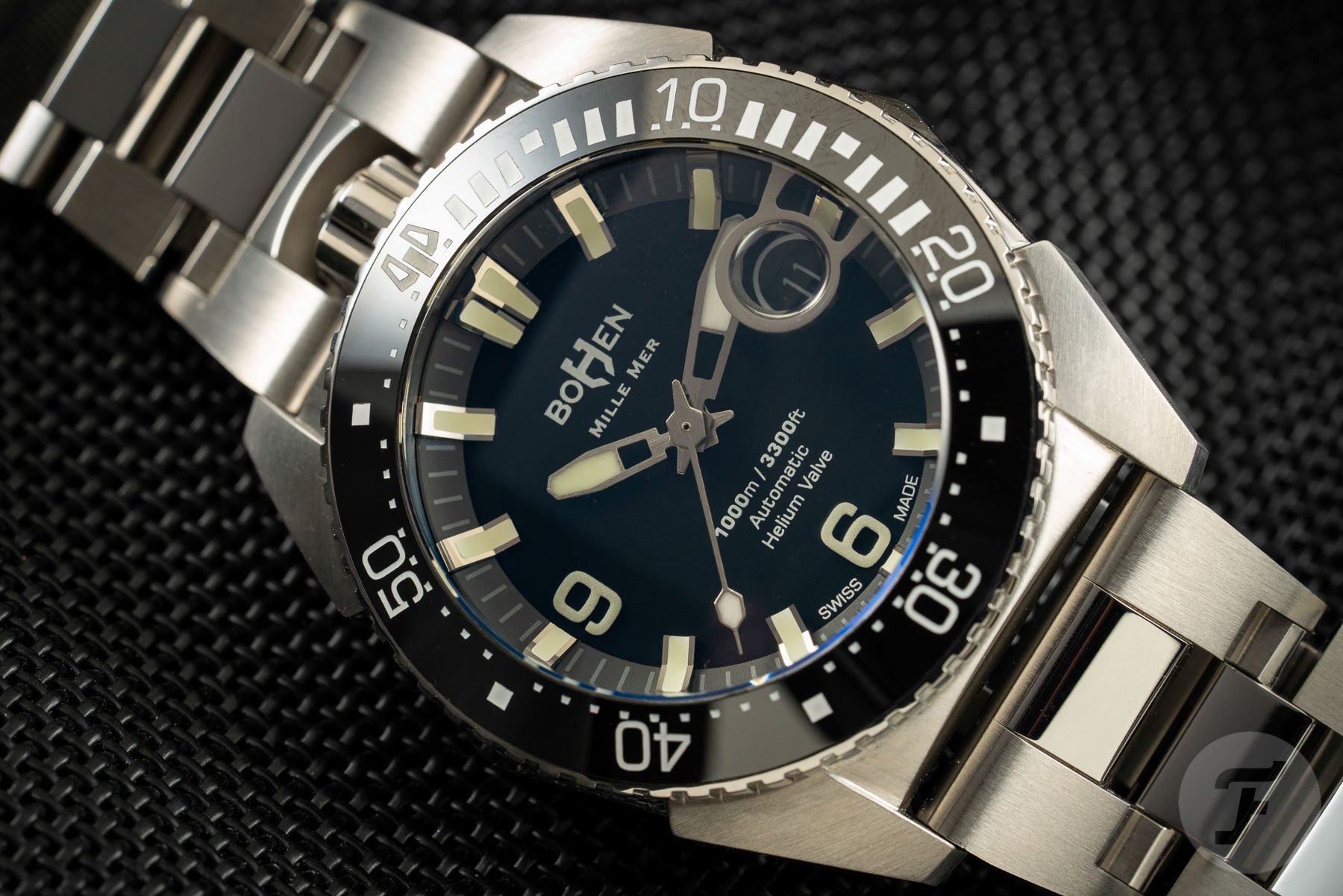 Right off the bat, I want to address the design codes employed by Bohen. This is an ambitious watch. Truthfully, it is a hyper-aggressive watch. It will appeal to fewer people than the Laventure (which borrows heavily from well-established model families, blending several deferential references with style).

The Bohen reaches for something new. It tries to upend a cart full of stale apples. Honestly, it is a laudable attempt and a worthy mission, as very little in our industry can really be considered “new”, these days. But does it get away with it? 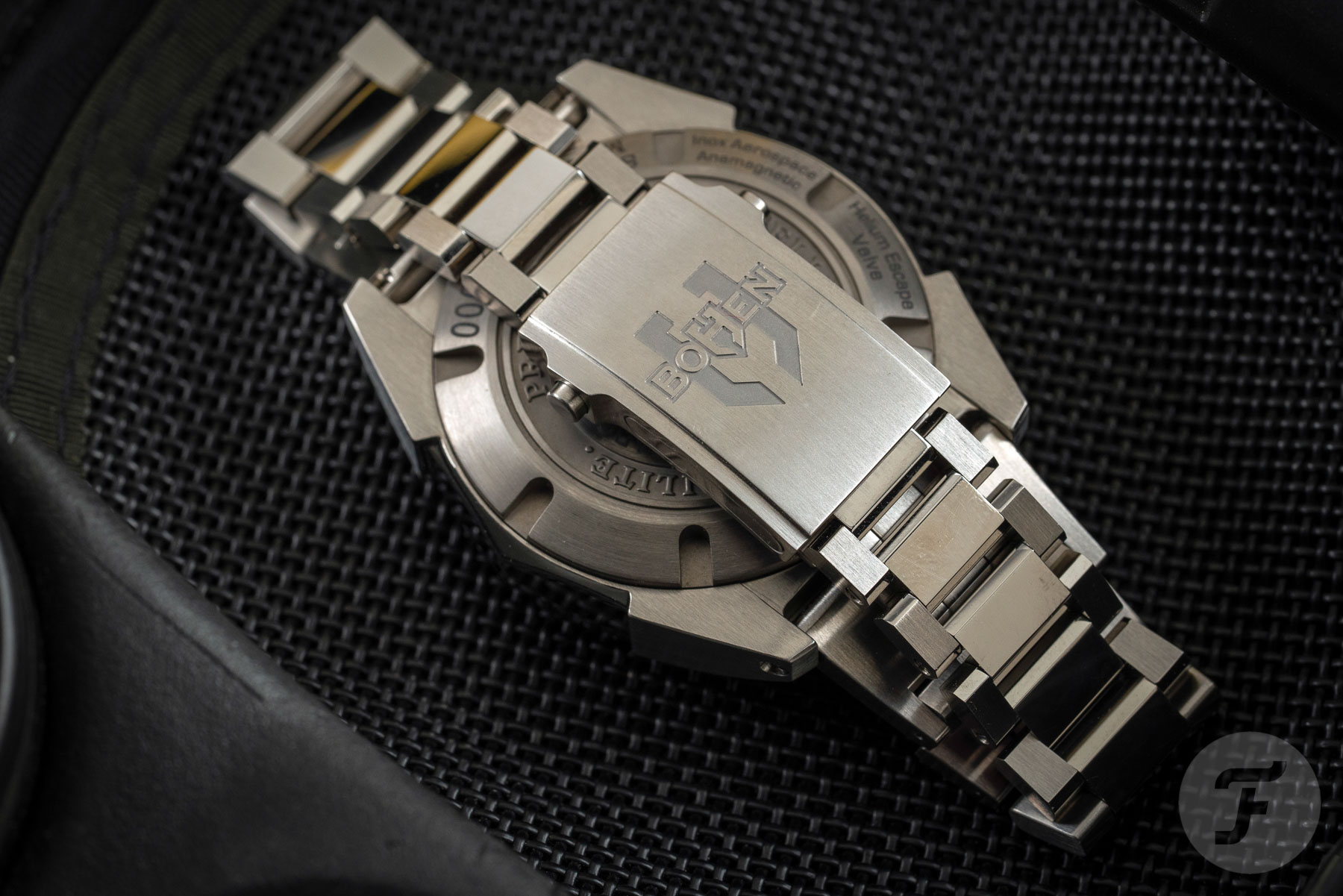 You know what? I’m going to say that it does. I have no doubt it will split opinion. I’m positive if both the models I’m using in this head-to-head comparison were on general release with no limits attached to them that the Laventure would blow the Bohen away in pure sales numbers. But does the brand really care? Does Artya care that Omega outsells it? Does Akrivia cry into its cereal every morning because it will never be as well-known, widely-loved, or as accessible as Patek Philippe? Heck, no. The punks and the rebels of this industry have a place. And, for anyone who was wondering, it’s on the wrists of punks and rebels who never doused the fire within. 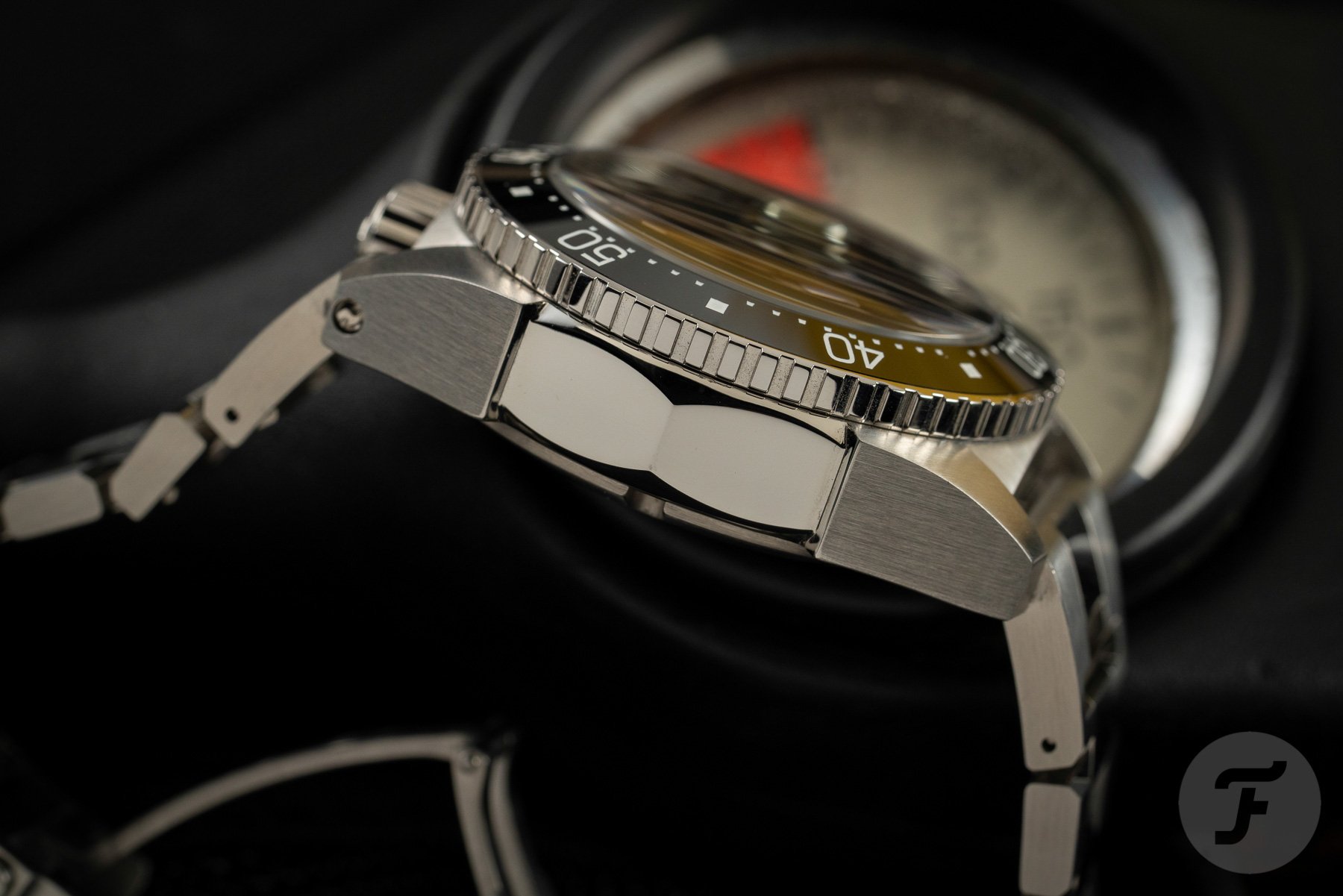 Never assume that the outward chaos of a punk’s attire smacks of laziness. The image is just as important as the music. Watches like this are a perfect embodiment of that edgy counterculture many middle-aged luxury watch buyers will find relevant. Every element of the punk image is designed to jar and elicit a strong reaction. Perhaps one of revulsion. Perhaps one of fear. In this case, however, I believe it speaks to the curious buyer that finds them drawn in by something so quintessentially different. 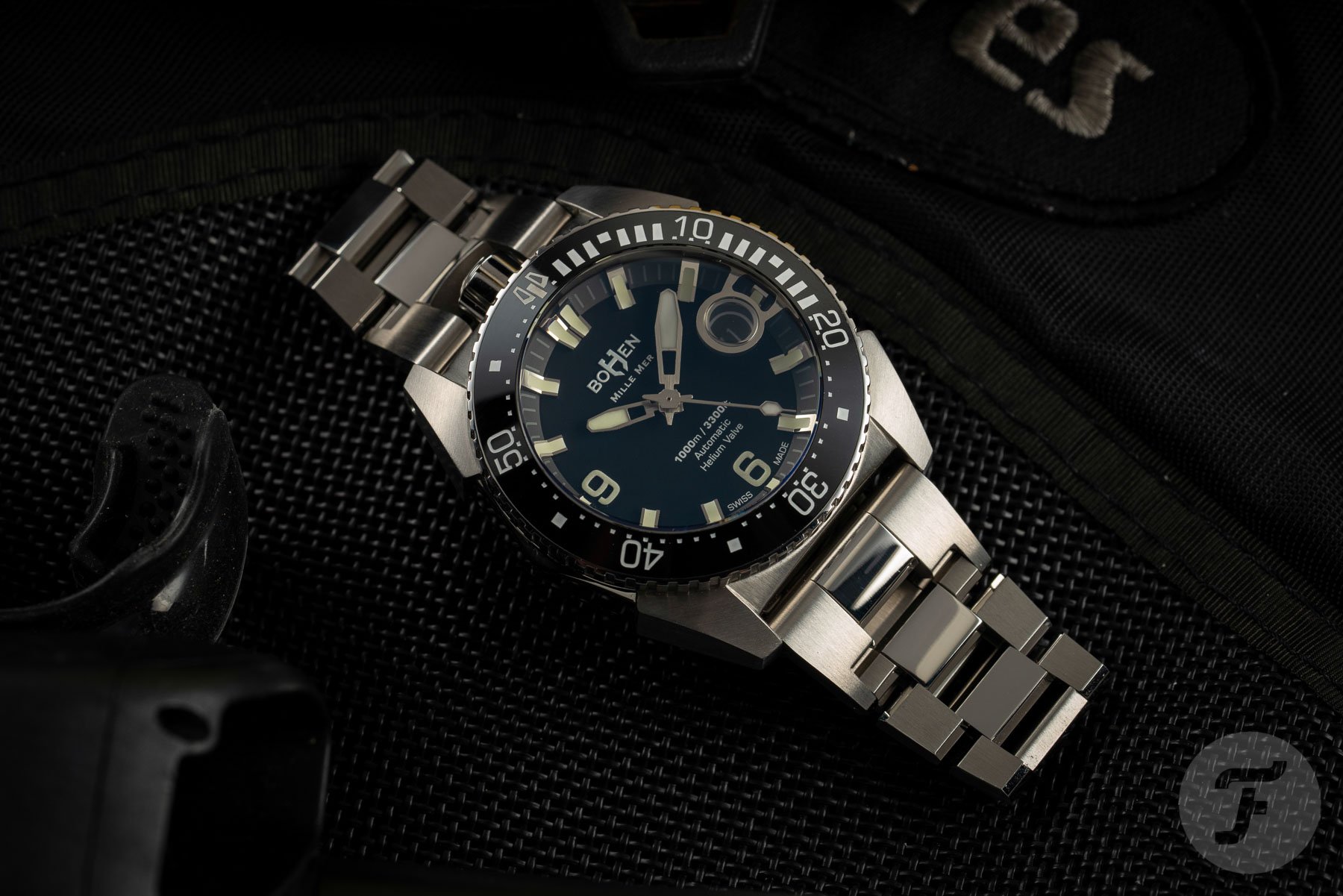 You’ve all seen the Submariner. I’m guessing if you hang around these pages often enough, you’ve seen the Seamaster too. You know what the regular fare looks like. Maybe, over time, you’ve convinced yourself that you like it more than your heart actually does? I think that’s happened to me, on occasion. I don’t think it’s true of any of the watches in my personal collection, thankfully, but I feel myself softening to models I never “got” when I hear endless praise directed at them. This… this is something different. That much is clear from the get-go. But is it as well-executed as it is well-conceived? 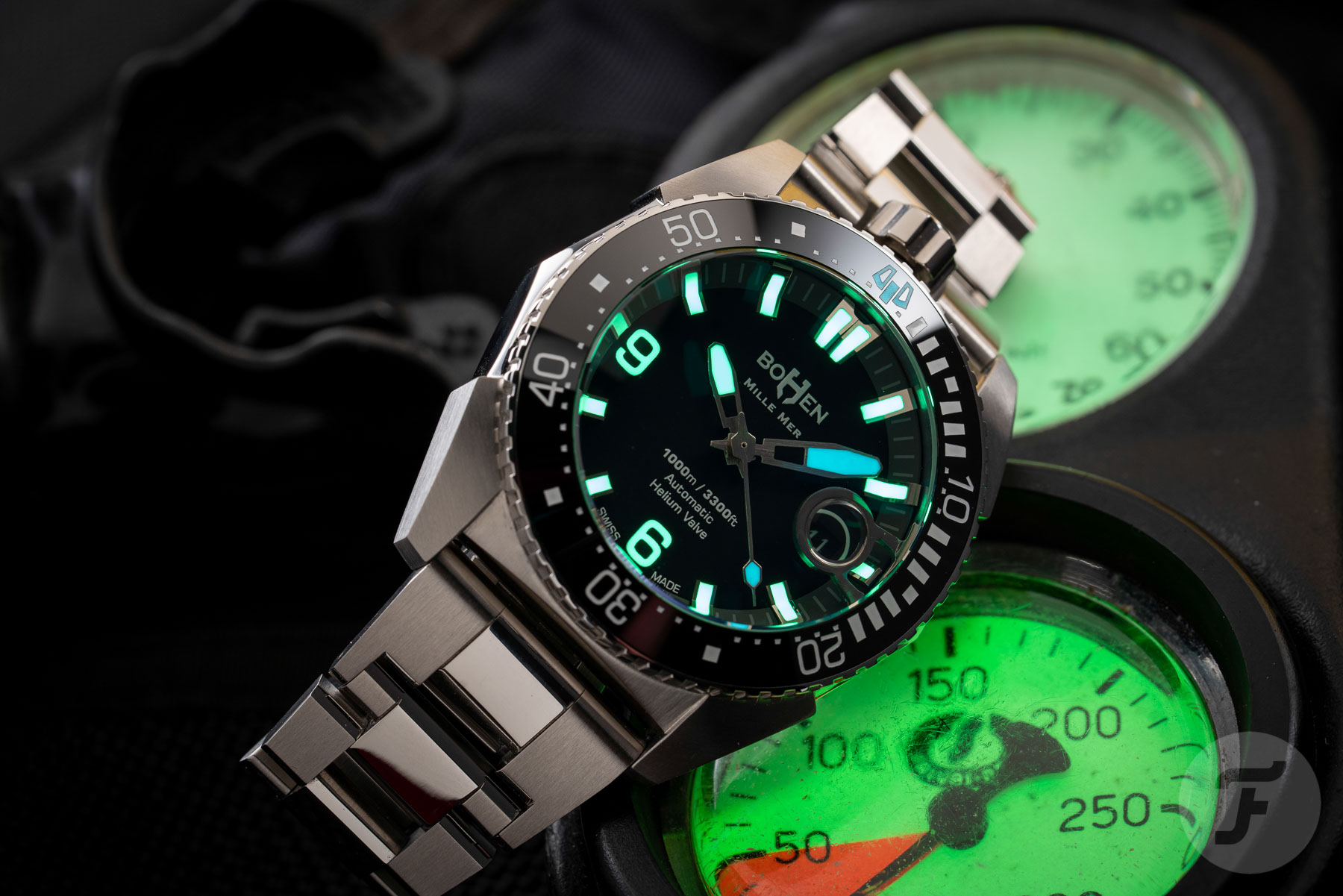 From renders alone, I was intrigued. “That’s a big ask,” I remember saying to Dave. “If they pull that off, it could be pretty decent. There’s a lot that could go wrong, there, though.”

“A lot that could go wrong…” I stand by it. Sharp edges here. Death-defying angles there. Ambitious curves that stop on a sixpence and merge into something that looks like it might take your eye out if you look at it askance. This is a big boy design that can only be handled by a big boy machining company. And I have to say, Bohen found one. 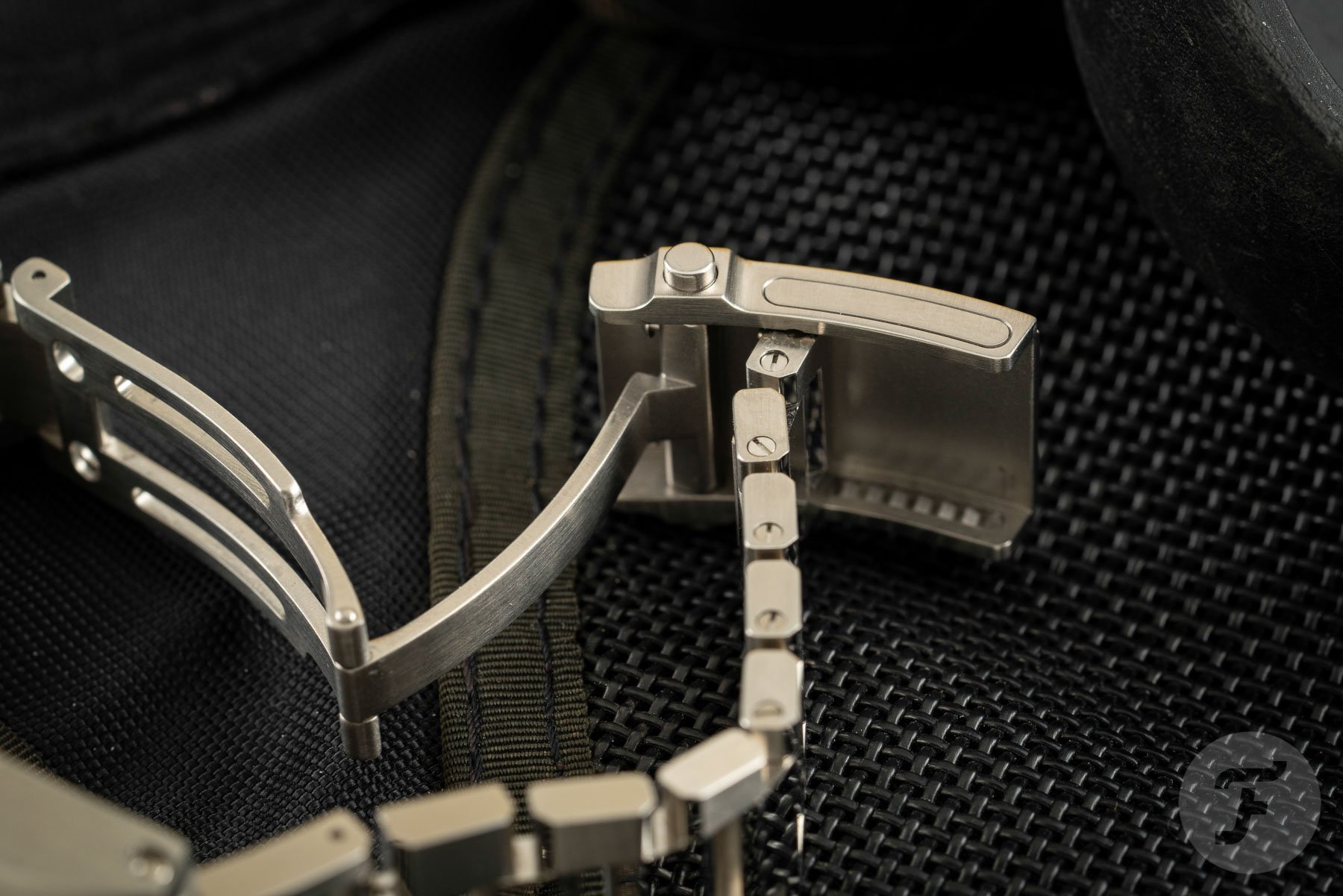 This is the closest value-add to the Laventure I can point to. Both of these watches are expertly machined. I do not say that lightly. While they are not made in the same place, I have a working knowledge of both plants (which I can’t name directly because of many an NDA I have signed in my time), but they work to a similar standard. I would still give the edge here to the guys behind the Laventure case because the portfolio of brands that manufacture works with easily out-punches the list of collaborators Bohen’s factory has in its locker. Nevertheless, this work is right up there.

Simply put, it is the kind of product that speaks to its retail cost. I could buy many a watch at one-third of this price and be less than one-fifth as satisfied as I would be if I bought this at full retail. The question for the audience, however, is how broad is its appeal? This watch is a palatable 43mm wide but a staggering 17.5mm thick. While the 1,000m water resistance might explain that to a point, it’s still a massive timepiece. The bracelet is divine and the buckle — loudly signed as it is  — is superbly machined. The 12 o’clock crown means this watch sits better than you might expect on the wrist, but there’s so much material here, it reminds me of a slimline PloProf on the wrist.

Weight-wise, however, it is surprising. By using a mixture of steel and titanium in the case construction, the wearability has been vastly improved.

A question for the Fratelli

I’ve enjoyed awaiting the arrival of this watch. Being intrigued for this long was good for me. The Bohen did not disappoint me, and, in fact, reminded me of a brand I used to love called Clerc. It’s a brand that peaked before I had the means to buy one of its excellently-made watches, but one that I would love to see more corollaries of. Clerc was a relatively short-lived project, but one whose exit left a hole in the market that a brand like Bohen should aim to fill.

With the question of the product answered (in my mind, at least — feel free to disagree with me from afar), I will turn my attention to the communication strategy. Will this model spark the imagination of those at whom it is aimed? Will the press pick up on it and spread the Good News like wildfire as was the case with Laventure? What do you think? What is the will of the Fratelli? Does this model seem like a good buy to you, or is there something stopping you from hopping on board? If so, let us know in the comments below. Learn more about Bohen here.

Hot Topics
Introducing: The Omega Speedmaster Super Racing With Spirate System
162 comments
Design Vs. Specs — Which Is More Important To You When Buying A Watch?
86 comments
The Time To Buy Is Now: How The Current Economic Climate Influences Watch Buying And How You Should React
51 comments
My Predictions For New Omega Speedmasters In 2023
48 comments
A Regret-Free Guide To Buying Your First Luxury Watch — Part Three: Higher-End Options From Omega, Rolex, Grand Seiko, And More
48 comments
Popular
Rolex Submariner – Historical Overview Of A Diving Legend
Robert-Jan Broer
22
Grand Seiko SBGA211 ‘Snowflake’ And Why I Didn’t Buy It
Robert-Jan Broer
23
#TBT A Vintage Seiko Buyer’s Guide to Affordable Goodness
Michael Stockton
32