Looking at Blancpain’s collection, you might think that the brand offers a fairly small selection of watches with just four collections. It does keep things simple. But you might be surprised to learn that the Fifty Fathoms collection holds more than 80 references. It’s nowhere near the 200+ references in the brand’s Villeret collection. But still, 80 Fifty Fathoms references is still quite a significant number. It triggered my curiosity about the relevance of all the pieces. More specifically, how this Bathyscaphe Chronograph Flyback holds up against the other iconic Fifty Fathoms models. 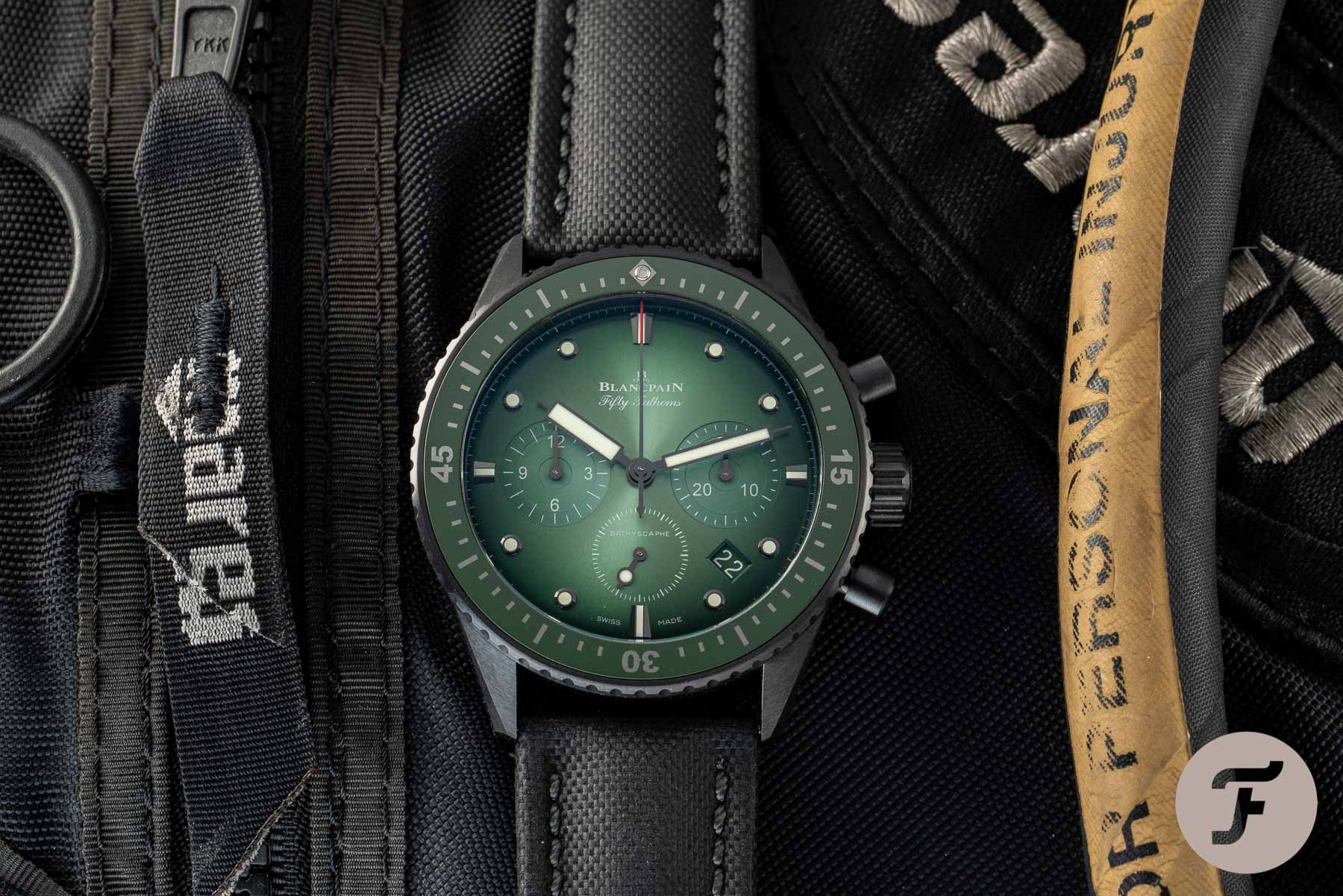 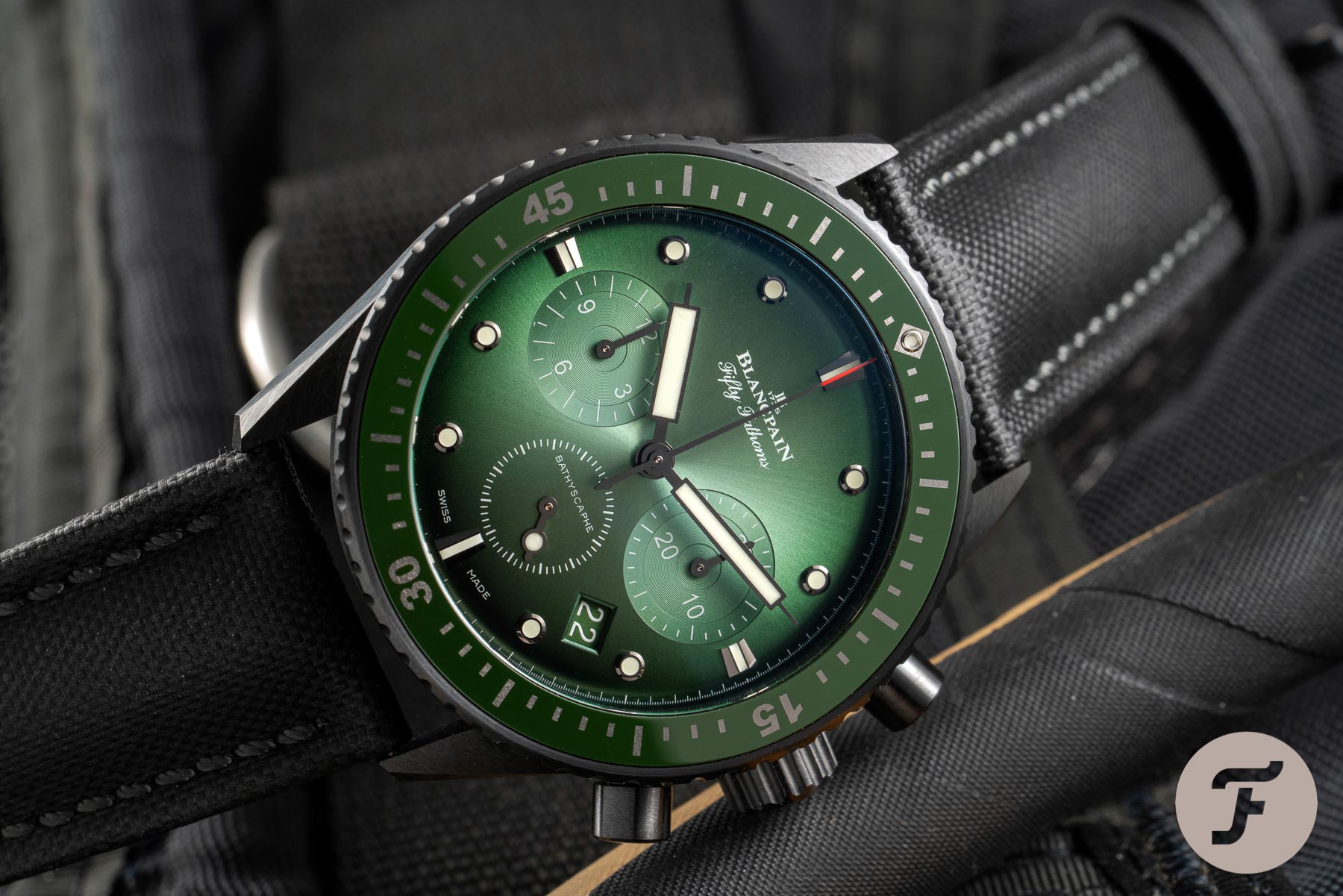 It has made the Fifty Fathoms one of the industry’s classics, and it feels like it has always been part of the Blancpain collection. But that’s not true. The Fifty Fathoms was delisted in the late 1970s at a time when the quartz crisis hit Blancpain hard. We saw the first return of the Fifty Fathoms in 1997. In that year, Blancpain released the limited-edition Fifty Fathoms Trilogy that Gerard wrote about here.

But it was a successful limited edition run of 150 pieces to celebrate the 50th anniversary of the Fifty Fathoms in 2003 that initiated a permanent comeback. Because of the success of this limited edition run, Blancpain decided to reintroduce the legendary diver. After four years of development, Blancpain introduced the new Fifty Fathoms in 2007. And with a growing number of references, it has been a successful part of the collection ever since. 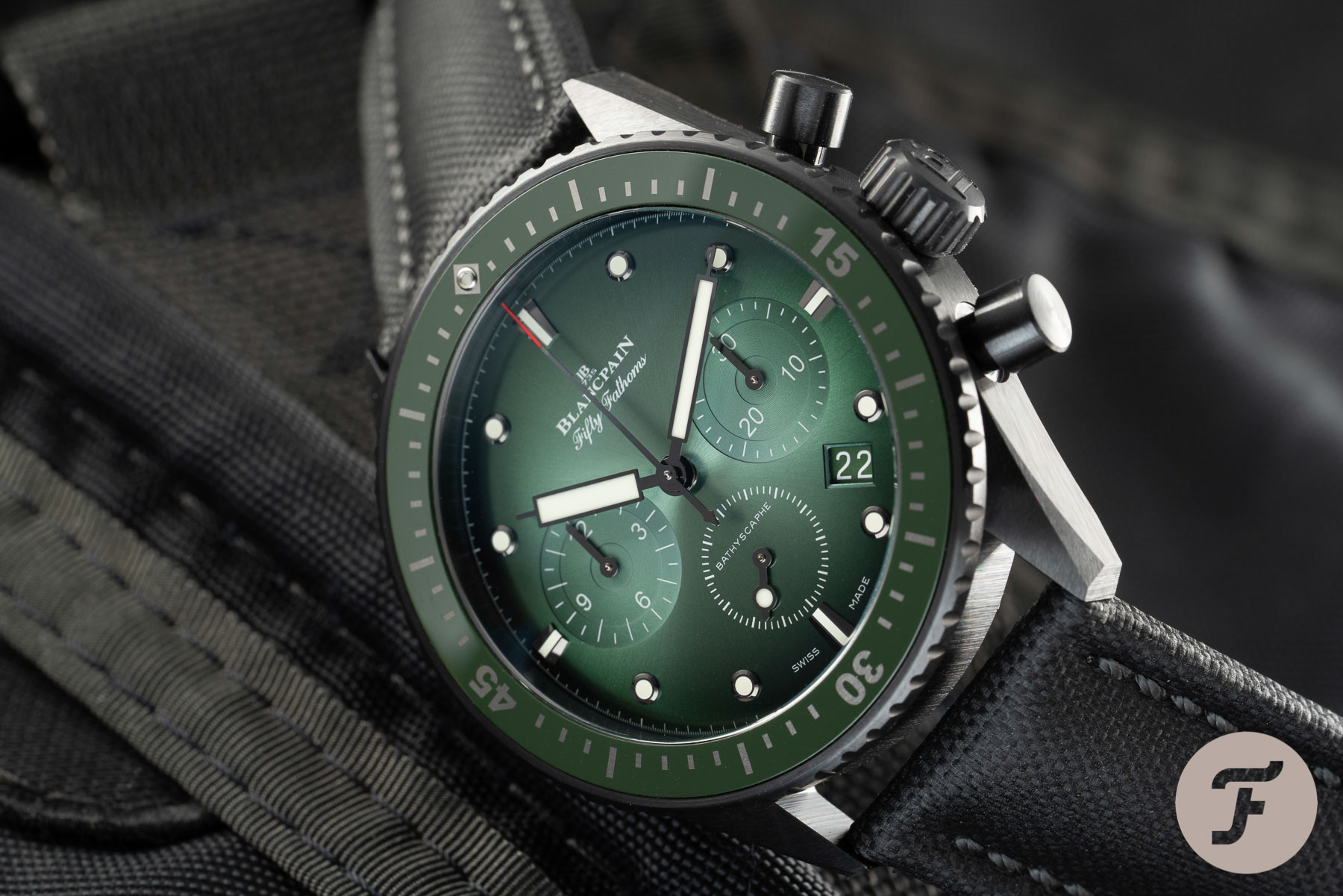 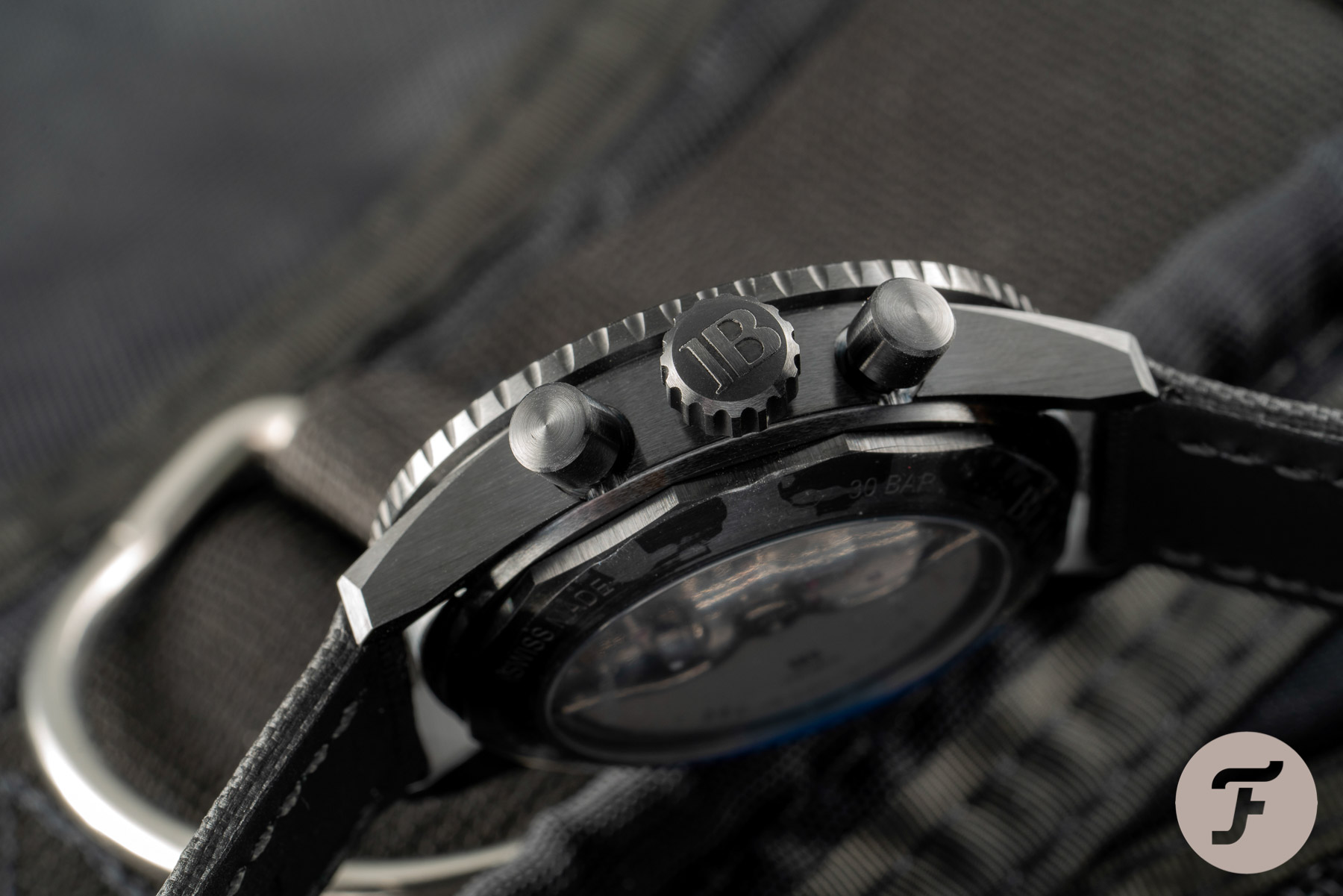 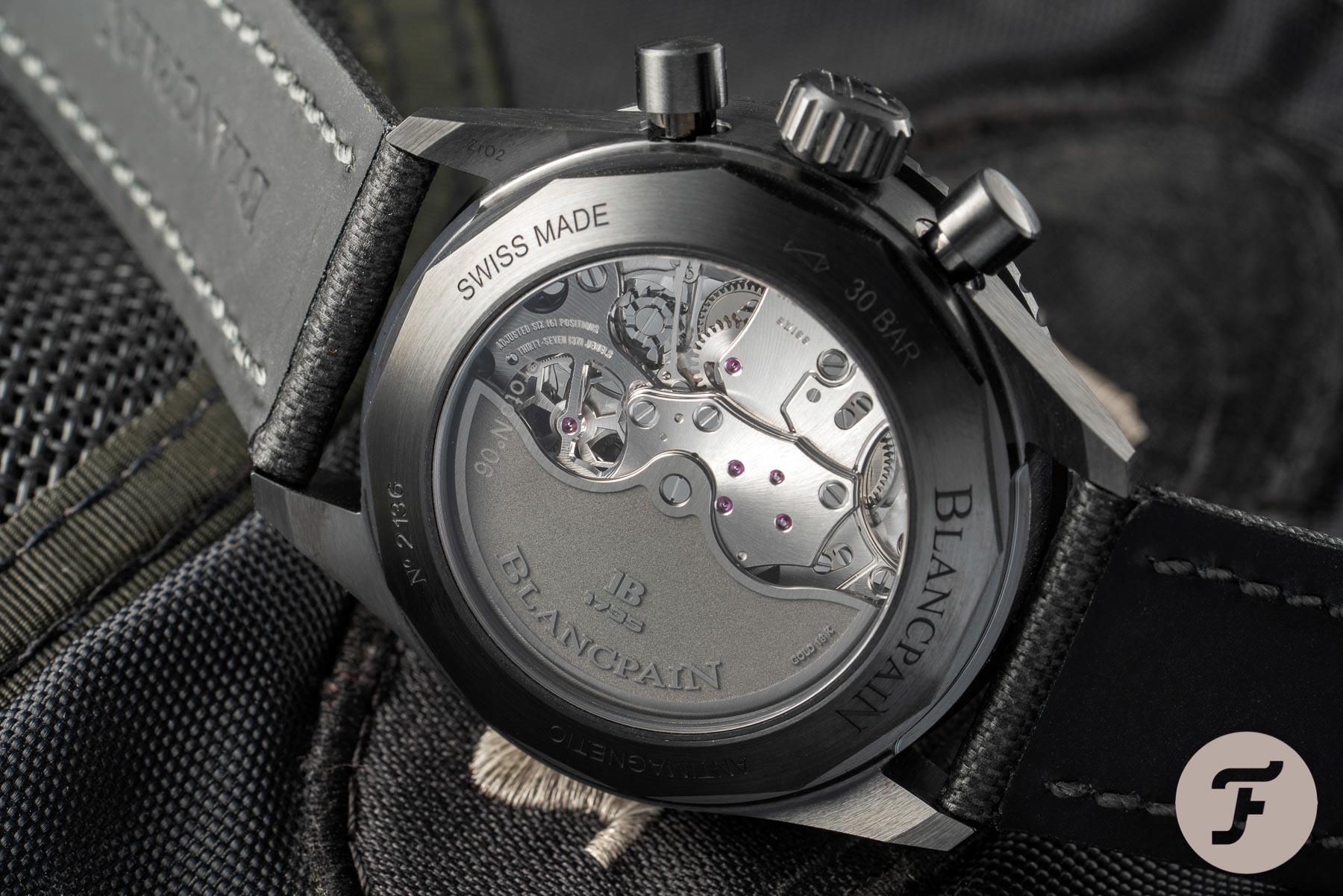 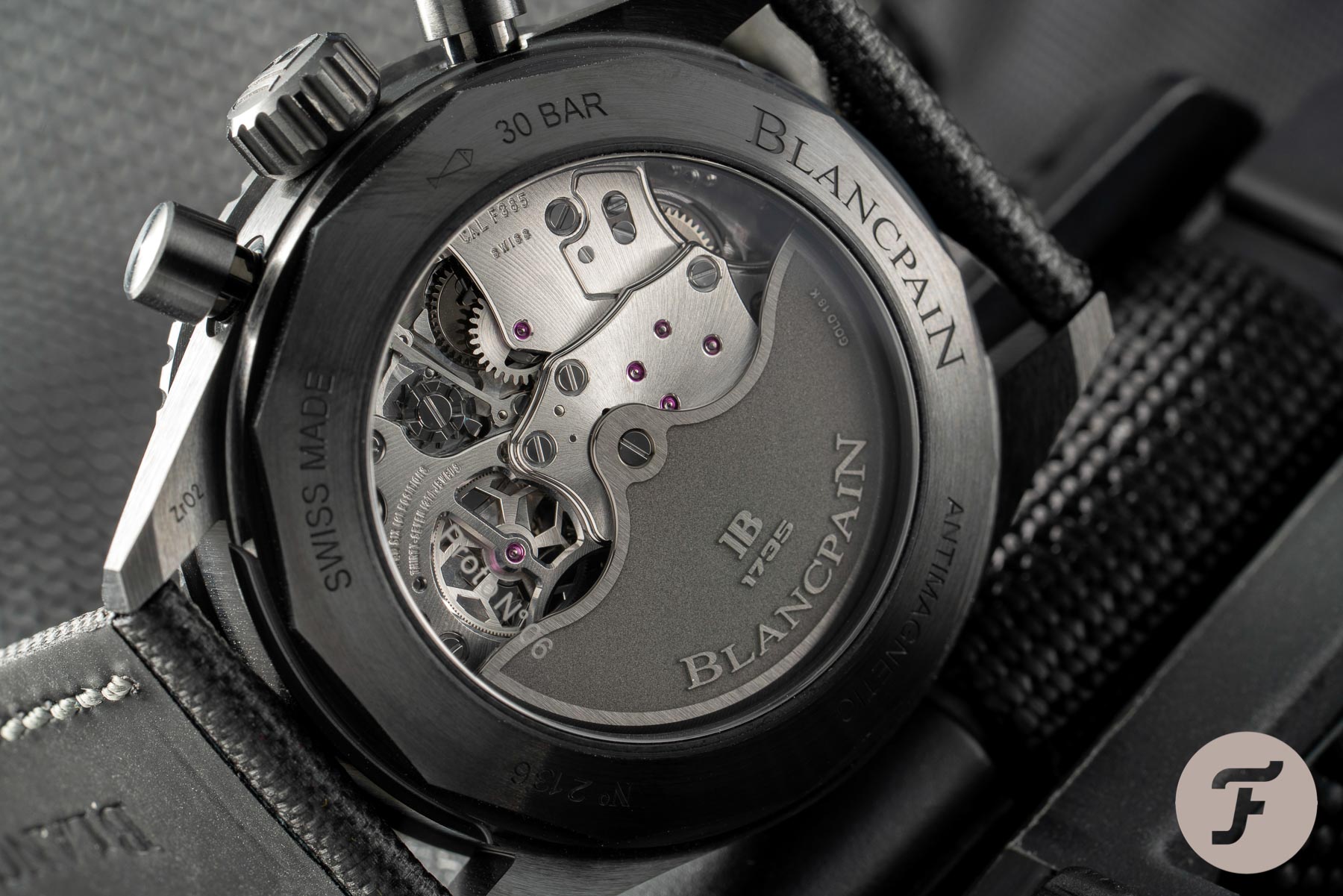 The movement saw Blancpain step away from the Frederic Piguet calibre 1185 that the brand used previously to power their chronographs. The Calibre F385 is an integrated chronograph movement fitted with a column wheel, vertical clutch, and an anti-magnetic silicon balance spring. It beats at 36,000vph like Zenith’s El Primero and Grand Seiko’s Hi-Beat movements, resulting in greater overall accuracy. On top of that, it allows for the chronograph to measure up to 1/10th of a second. 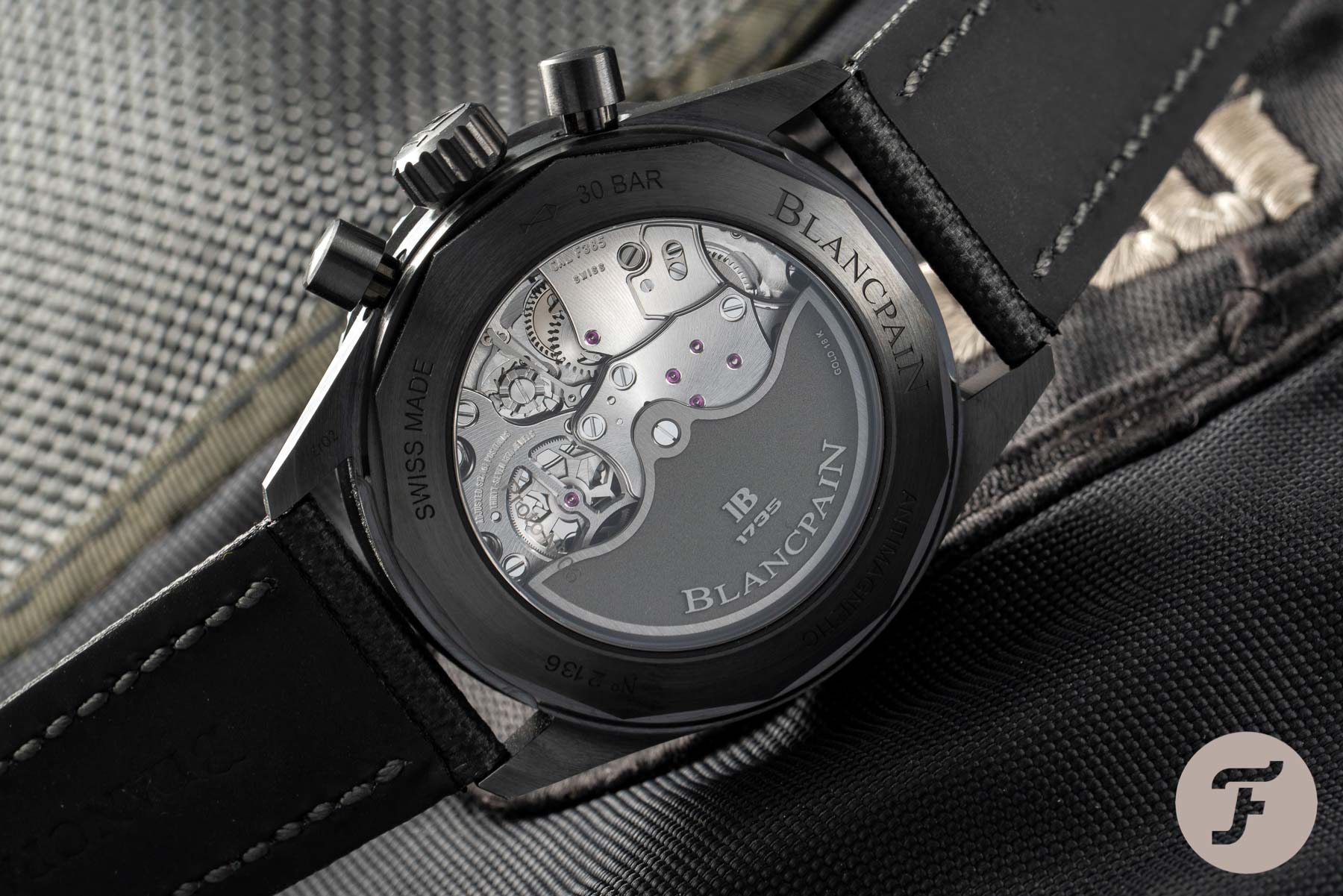 The movement also features a flyback function that allows you to stop, reset, and start the chronograph hands with just one press of the pusher at 4 o’clock. Using the chronograph feels very qualitative and smooth. Operating the pushers is a joy, and it’s evidence of great quality and craftsmanship. More evidence can be found when you turn the watch around. The movement is visible through the sapphire case back and features a technical finishing that fits the overall look of the watch. 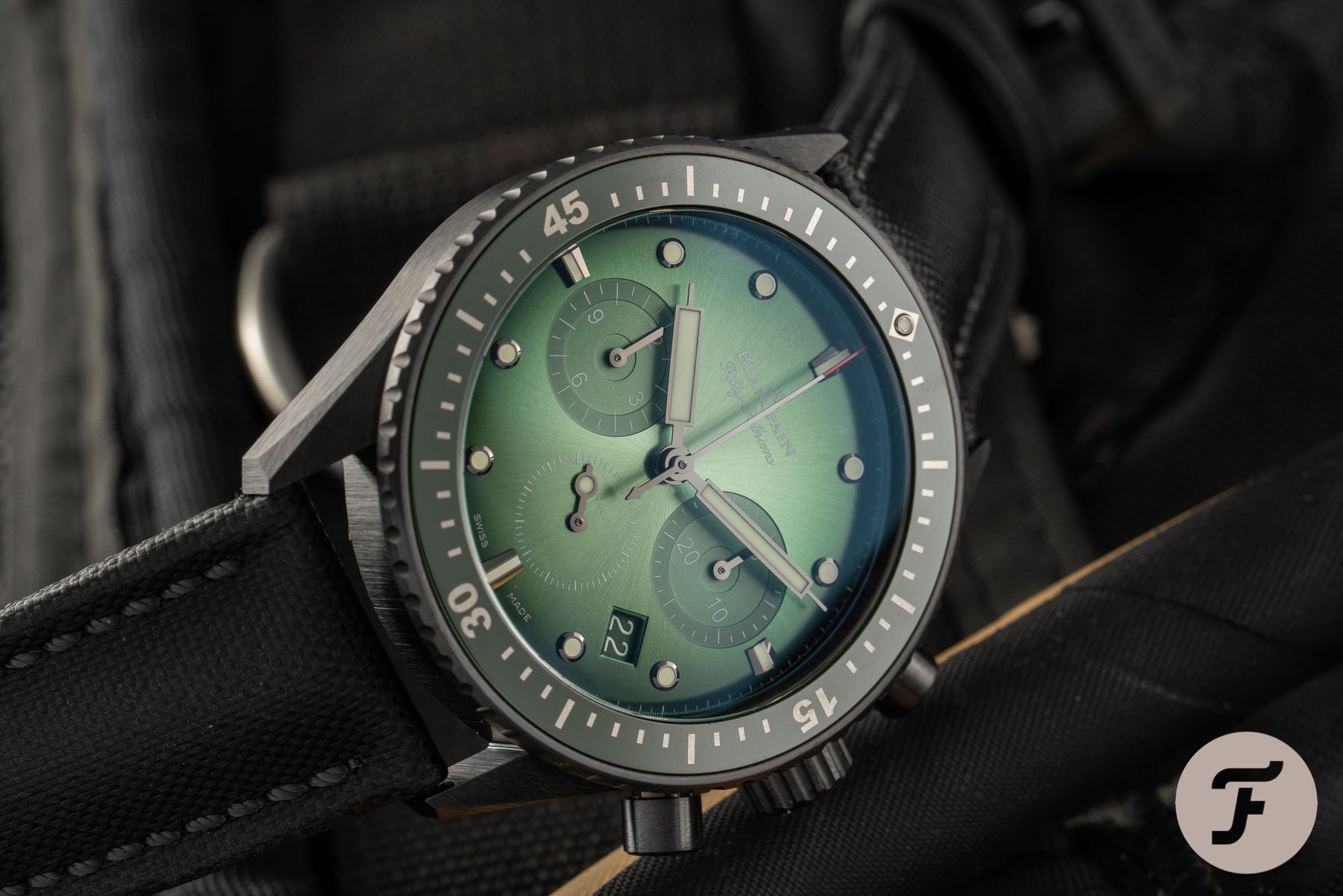 Speaking of looks, that’s the true novelty of this particular watch. This new Fifty Fathoms Bathyscaphe Chronograph Flyback comes with a black ceramic case, a green dial, and a green ceramic bezel inlay filled with liquid metal for the numbers and markings. At 43.6mm and 15.25mm thick, the case is slightly larger and thicker than the usual 43mm diameter and 13.8mm thick case for the regular Bathyscaphe. Until now, the watch had been available with a black, grey, or blue dial in combination with a black or blue bezel. The green color does create a rather different aesthetic from the other available models.

What to make of this green version? I am a fan of clean-looking, almost minimalist watches. But I have always been on the fence about the looks of the Bathyscaphe. Despite its 1950s-inspired clean looks, the watches have always felt a bit distant and impersonal to me. It’s not to say I am not intrigued by the fully black versions of the Bathyscaphe series. That stealthy appearance certainly has its charm. 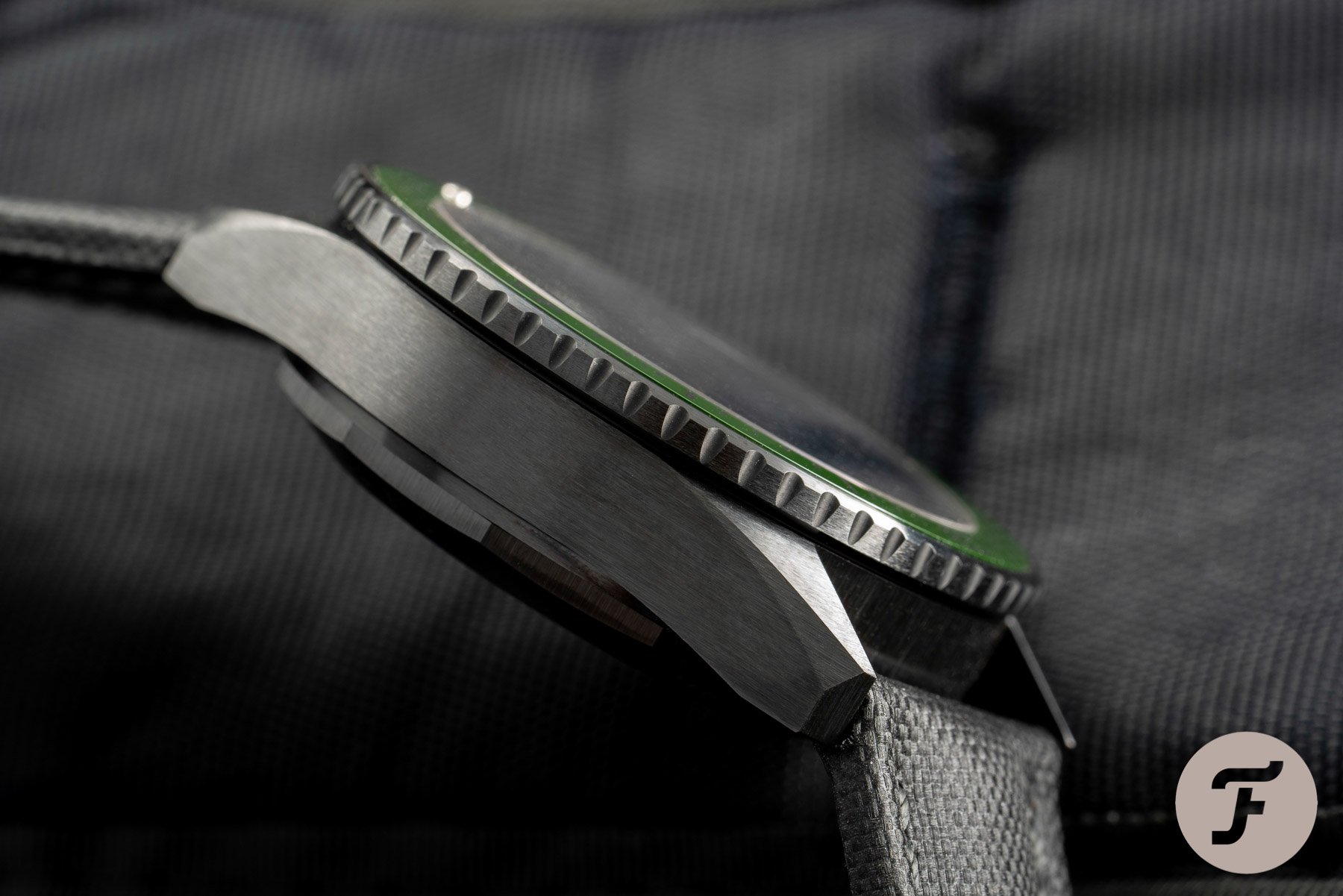 This vibrant green color version is something else, however. This is the most lively version of the collection. Honestly, I am not the biggest fan of this particular green color. Depending on the light, the color of the sunburst dial will definitely change. But overall, in the daylight, the green color has too much of a yellowish glow for my personal taste. Another thing that took some getting used to is the big contrast of the black case and the green color. It goes from very stealthy to incredibly intense. Obviously, that is a deliberate choice, but it was hard for me to get used to it. 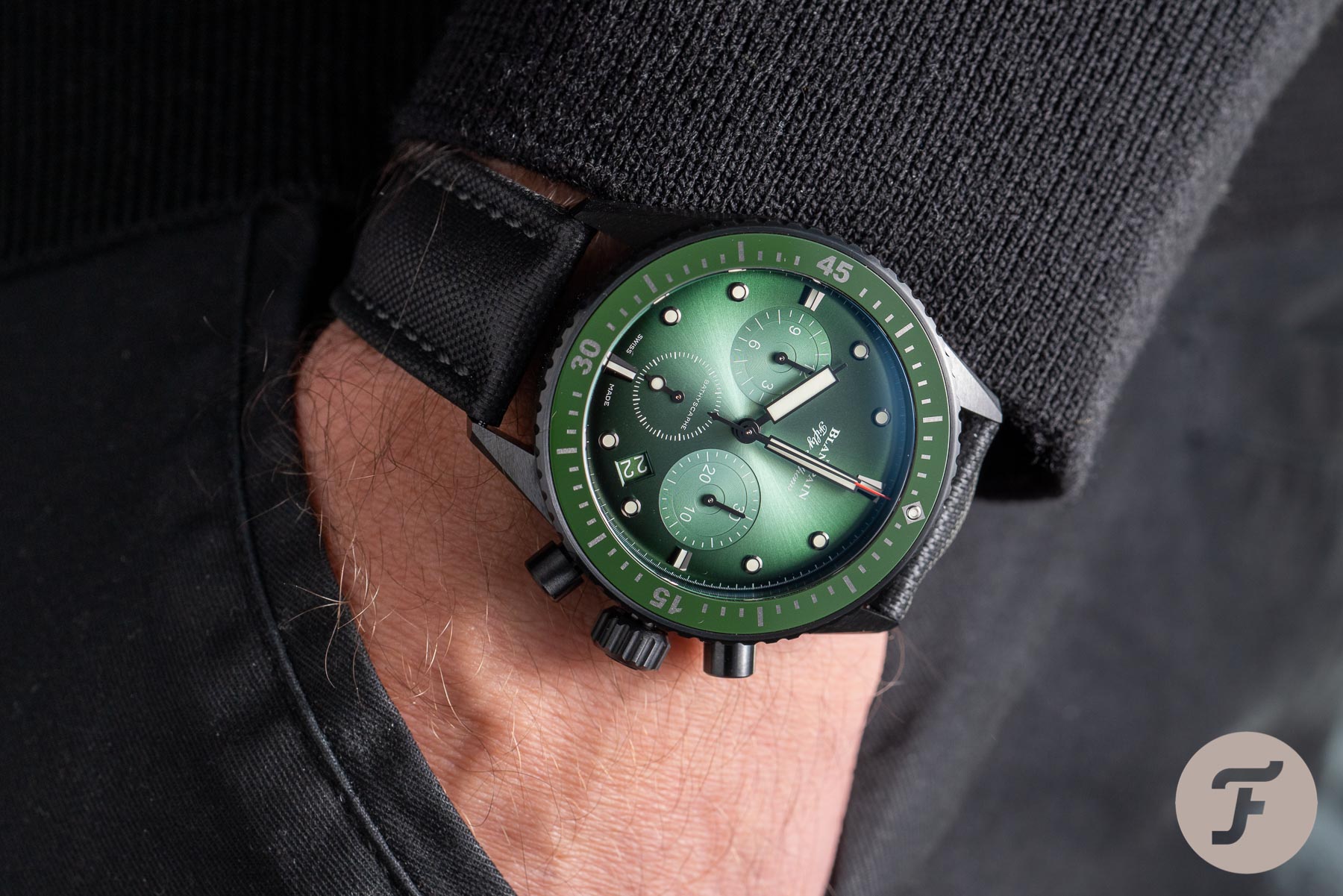 But there is no better way than getting a feel for a watch than wearing a watch. I got a better overall feel of the Bathyscaphe Chronograph Flyback after wearing it for five days. First off, the watch is very easy to wear. It is very light due to its brushed ceramic case, and the 43.6mm size was a good fit for my wrist. Combined with the “sail” canvas strap, it was very comfortable to wear. 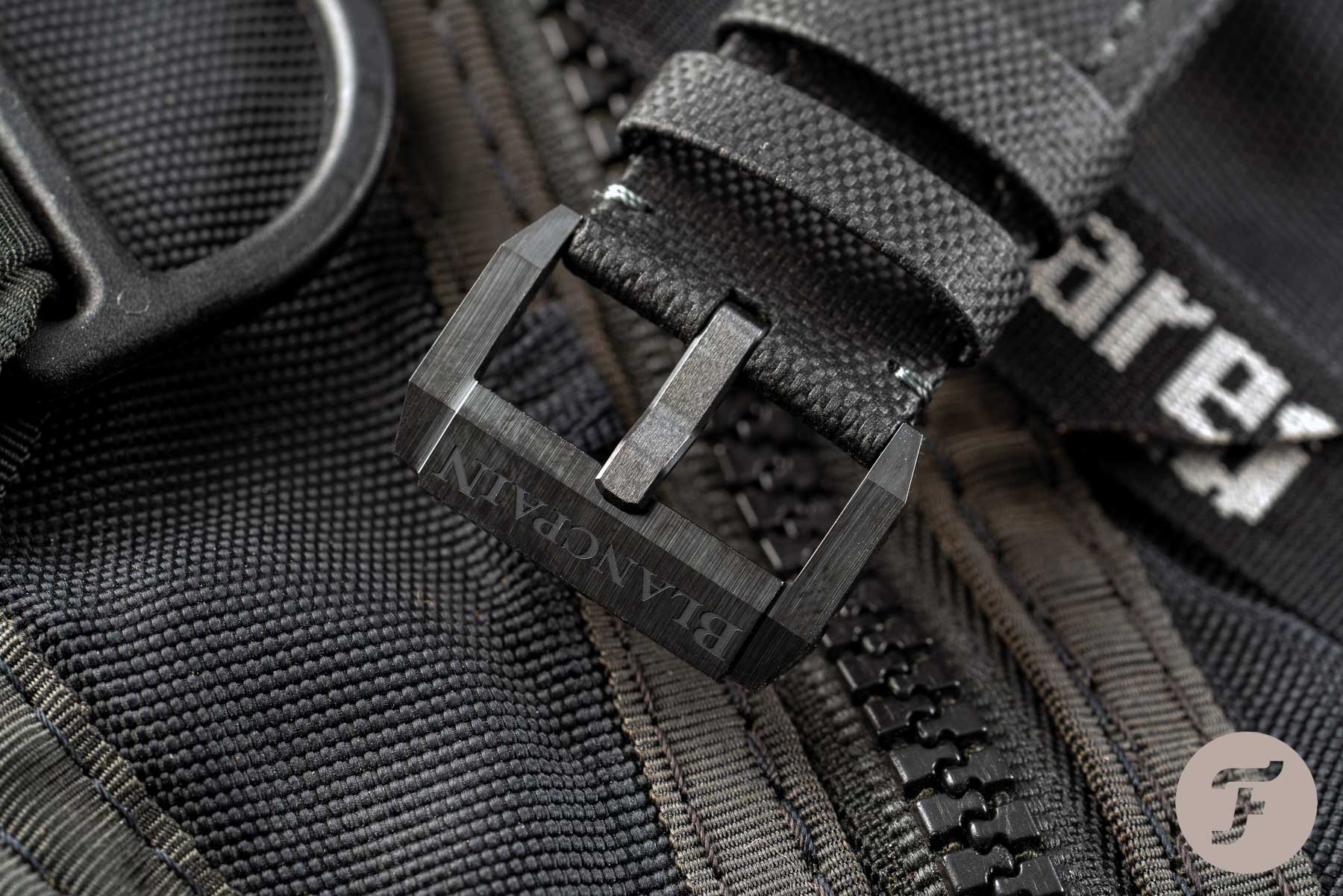 What immediately stands out is that overall the legibility is great.  Because of its minimalist looks, it’s easy to read all the necessary information, which is essential for a divers’ watch, of course. The 30-minute counter at 3 o’clock and the 12-hour counter at 9 o’clock are very easy to read. Both counters have an added depth because they are regressed into the dial and feature a snailed finish. They are complemented by the small seconds counter at 6 o’clock. 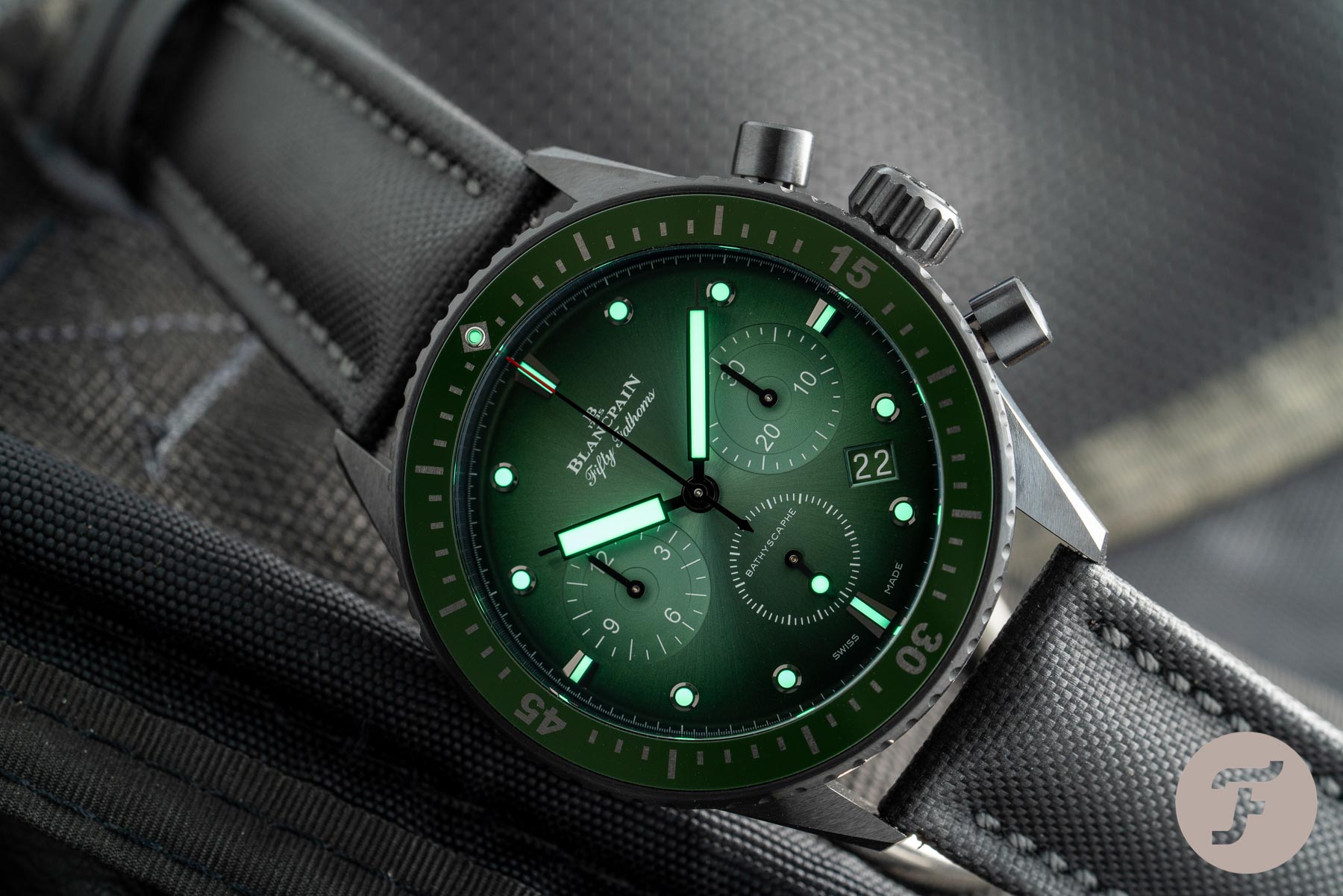 If there would be one thing I would have liked to see differently, it’s the placement of the date. Placed between the 4 and 5 o’clock marker, it feels slightly too far down and too tilted for my liking. The black hands are filled with Super-LumiNova, as are all the hour markers and the lumed dot on the bezel. It guarantees great legibility in darker light conditions. A nice little detail is the lumed small seconds hand. You will see a lumed dot moving in circles on the lower part of the dial when it’s dark.

After five days, another thing stood out to me, and that is the incredible quality and craftsmanship that goes into making the watch. Blancpain is part of the most exclusive brands of the Swatch Group, and you definitely experience that. It is most evident in the overall finishing of the case and the movement and in the feel of operating the chronograph. Every press of the pushers is met with a modest click, and it’s a joy to see the black chronograph hand with the red tup move smoothly across the dial. 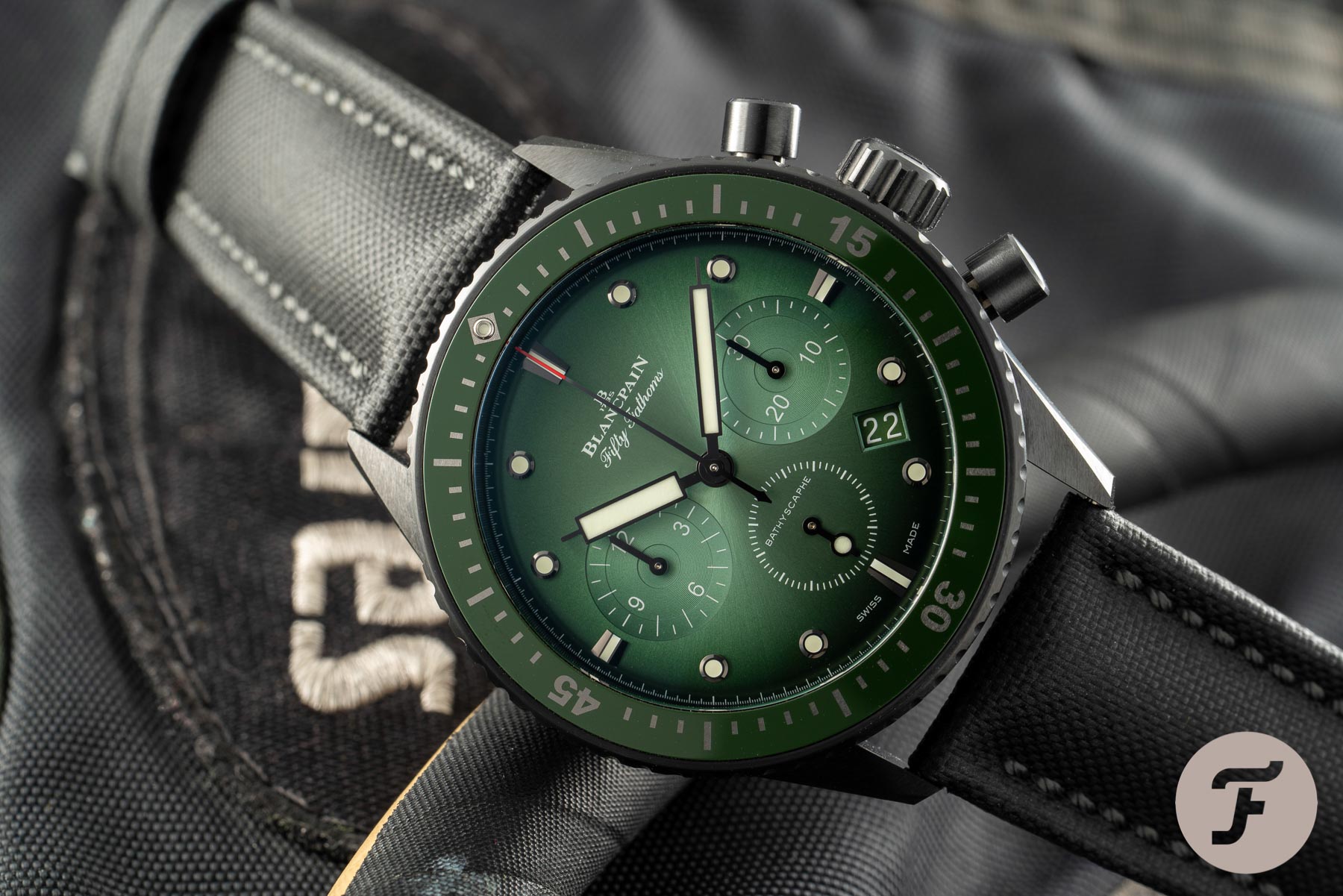 Which brings me back to the question of relevance. After experiencing the Fifty Fathoms Bathyscaphe Chronograph Flyback from up close, I can see it has a lot going for it. But despite its outstanding movement, use of great materials, and impeccable build quality, I am left with the question of why I would choose this? And the answer remains somewhat unclear.

After wearing the watch for five days, I still haven’t connected to it. There are these small details that stand in the way of really liking it. The placement of the date, the paddle-style hands that are really prominent, the sharp edges of the lugs, and the shade of green. And when you are planning to spend the list price of €16,100 on this Fifty Fathoms Bathyscaphe Chronograph Flyback, those details should not be popping up constantly. 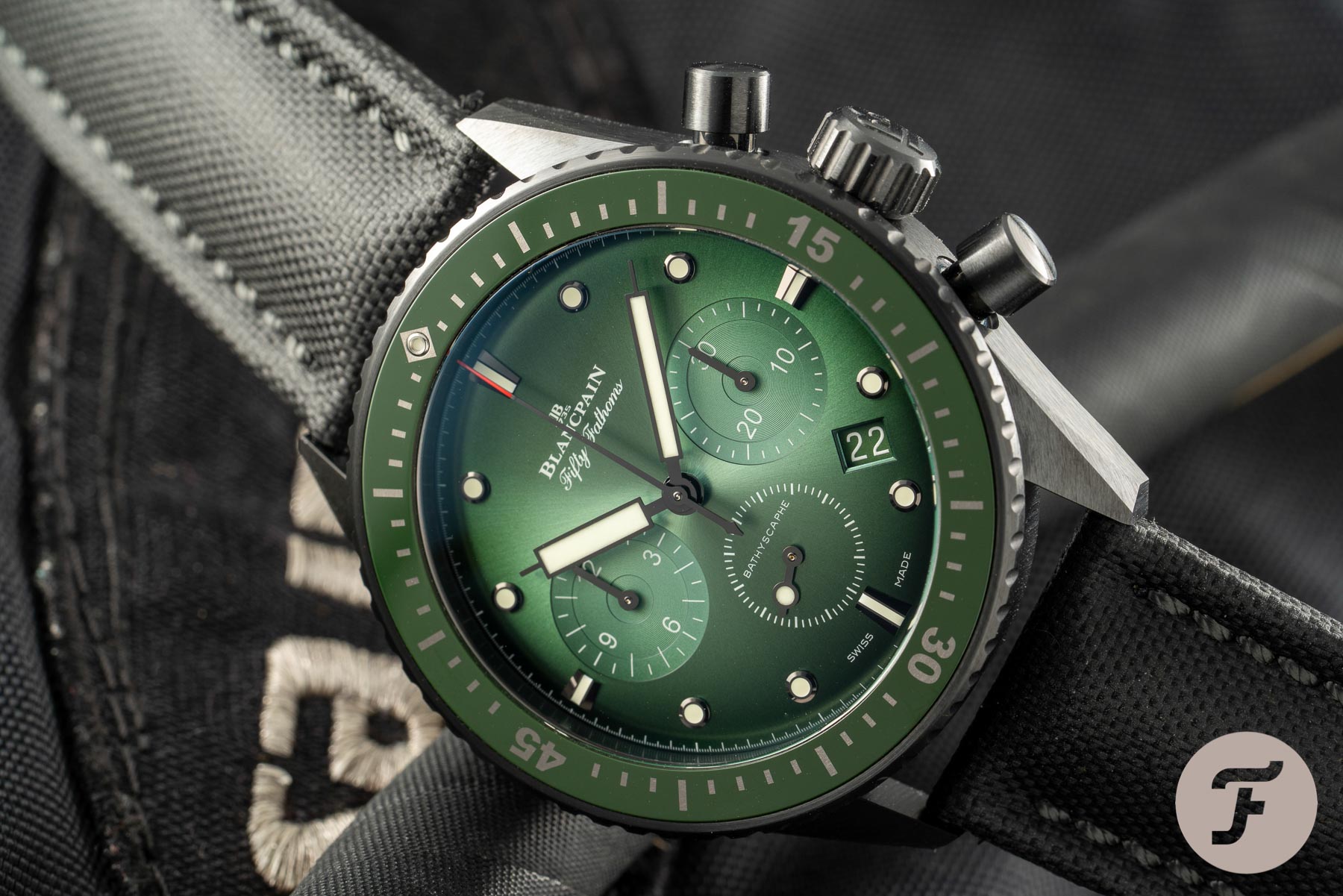 Obviously, these details are very personal. I understand that. But since I like the minimalist design trades of the Bathyscaphe, I really wanted to like it. Would the easy answer be that this green version is just not for me? And maybe a stealthy black version or the all-black version with a steel case are better options? Yes, for me, they would be at first glance.

But the more elaborate answer would be that I would look at all the Fifty Fathoms options that Blancpain has in that same price range. Because, if anything, those five days have confirmed once again that I would like to add a Fifty Fathoms to my personal collection at one point. And although this green Fifty Fathoms Bathyscaphe Chronograph Flyback might not be my first choice, if you are in the market for a modern green version of a Bathyscaphe Chronograph Flyback, this definitely is the way to go.