In 2015, the Speedmaster Silver Snoopy Award watch was introducing during BaselWorld. A watch that sold out in one day at the show, to Omega’s network of dealers and boutiques. This watch commemorated the 1970 Apollo 13 mission where the Speedmaster played a very important role in the safe return of astronauts Swigert, Lovell and Haise. The full story can be read here, and we also included it in our Speedy Tuesday magazine that came out last year. 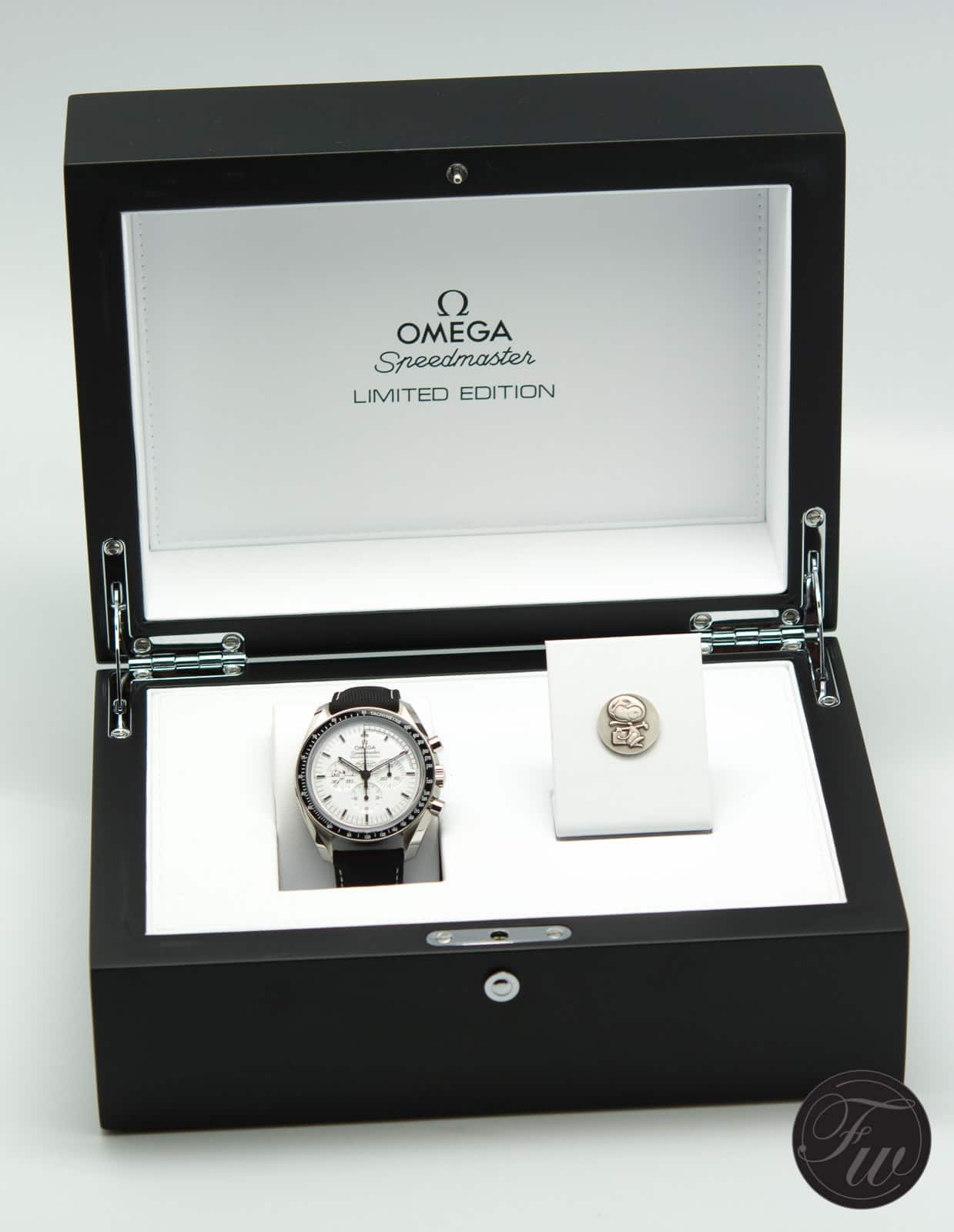 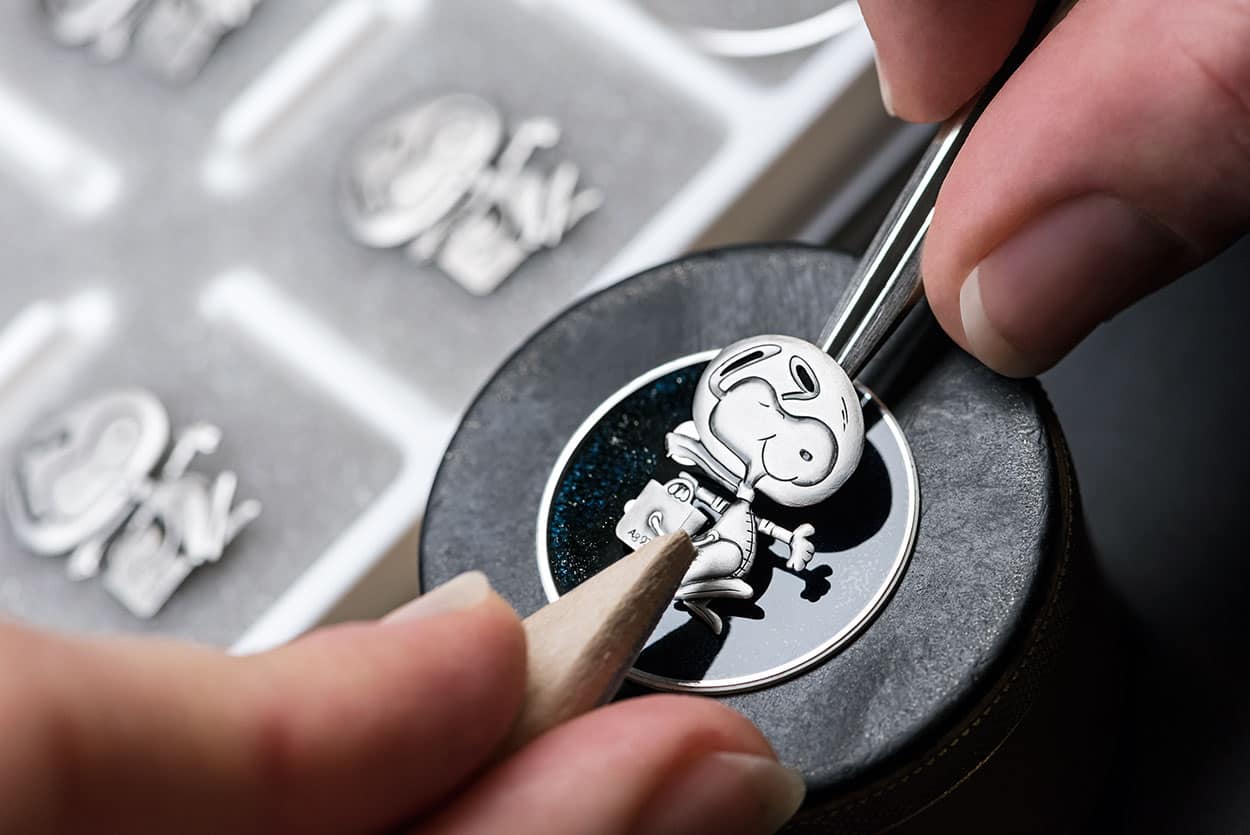 Omega produced 1970 pieces of this watch, featuring a white dial with Charles Schulz’ beagle on the 9 o’clock subdial and the text “Failure is not an option” as well as “What could you do in 14 seconds?”, referring to the Apollo 13 mission. The biggest treat perhaps is the caseback, that features a silver applied Snoopy with a space helmet on a background of blue and black enamel, with silver dust (stars). If you remember correctly, the delivery of the Speedmaster Silver Snoopy Award watches was somewhat delayed. This was because of the caseback, it seemed to be more complicated and time-consuming than they had foreseen, so many of these Speedmaster Snoopy watches were delivered near the end of 2015 and a few more in 2016. As written above, these watches sold out on the first day of BaselWorld and it became virtually impossible to get one unless you had some pretty good contacts with a dealer or boutique. Prices on the market for these watches quickly went over 12.000 Euro / USD and then they just disappeared entirely. Since we have our Speedy Tuesday feature for six years now, you can imagine the number of emails and messages we received from collectors who wanted to have one. Even some hopeful people, that thought they would be still around for the retail price. A few weeks ago, one was auctioned for over 20.000USD and just the other day one popped up at Govberg for $27950USD (no typo). Looking at some private sales, we see they’ve come up in the last 3 months between $17000USD and $19500USD. Remember, this watch had a retail of €6000 in 2015.

And Then Prices Went Up For All 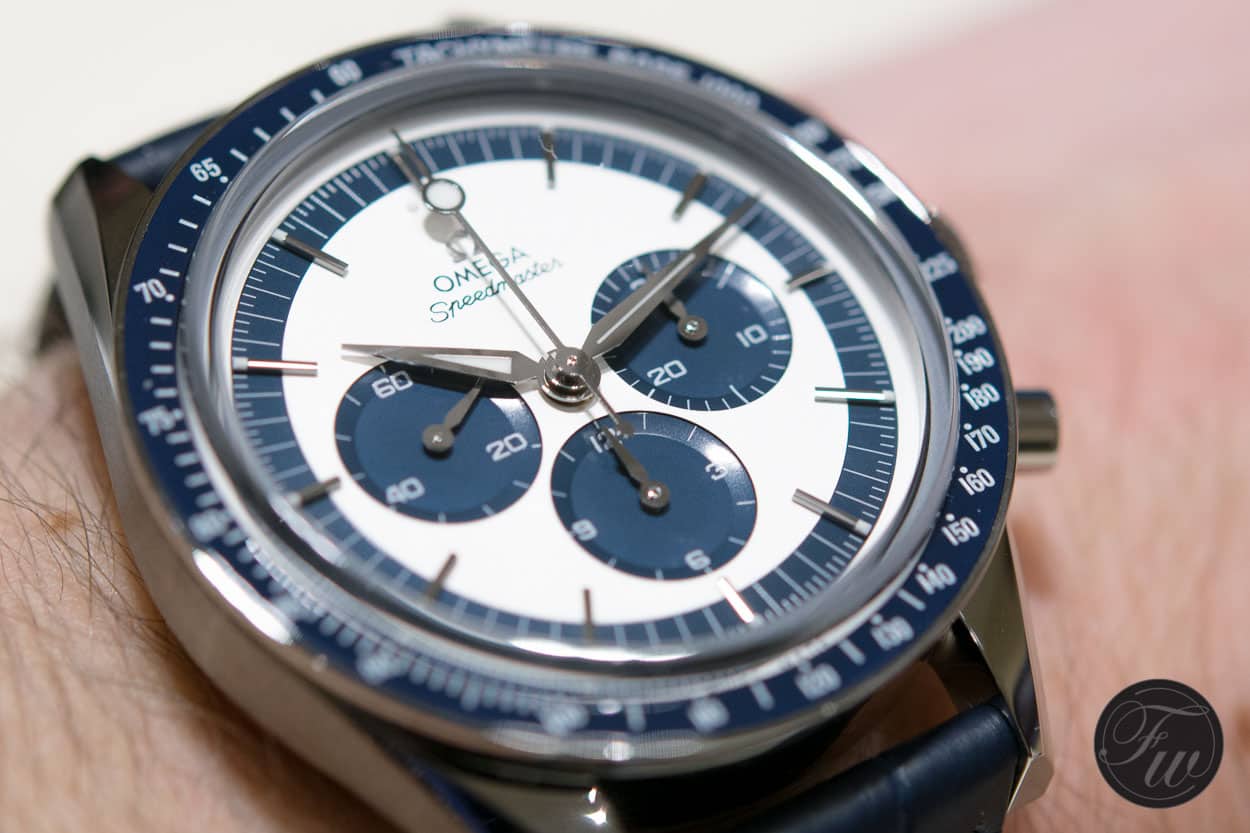 I don’t mind people buying a watch cleverly, so they won’t lose any money on a watch. Now, I also don’t mind anyone making a buck or two when selling a watch from their collection. The price on these watches will definitely increase over time, and that’s not a bad thing. That’s the way the market works. But if the value increases so steep like this, it makes me worry about the state of the collector’s market. But the possible bubble in the current pre-owned and vintage watch market is a topic for another time. My worry is about collecting Speedmasters and not even about the vintage ones. I am pretty confident that the times are over when you could find a nice calibre 321 Speedmaster below $5000USD and I actually don’t mind either. Not because I have one, but because I feel the true value of those calibre 321 Speedies is way more than $5000USD. No, my worry (and frustration) is about the new Speedmaster watches coming out. Ever since the Speedmaster Silver Snoopy Award came out, the demand for the next limited and special edition Speedmasters has gone through the roof. And that’s a good thing for Omega you would say, and it probably is, but a portion of those watches are being bought and delivered to speculators. Speculators who buy watches to make some big bucks over the craving for these watches by collectors. As everyone could witness the mass interest in the Speedmaster Silver Snoopy Award, they thought the same would happen to the limited edition Speedmasters that came after. The CK2998 with the blue and white dial that came out in 2016 and of course ‘our own’ Speedmaster Speedy Tuesday last year. And not only for those watches, it became interesting for speculators to order them, also the previous limited or special editions were sought after in a strange and unnatural way. Think Alaska Project from 2008 for example, a watch that didn’t move that quick at first, but since a few months fetches prices around $12000USD and more. The Japanese racing model is another and the prices for the Tintin model are going up rapidly as well. 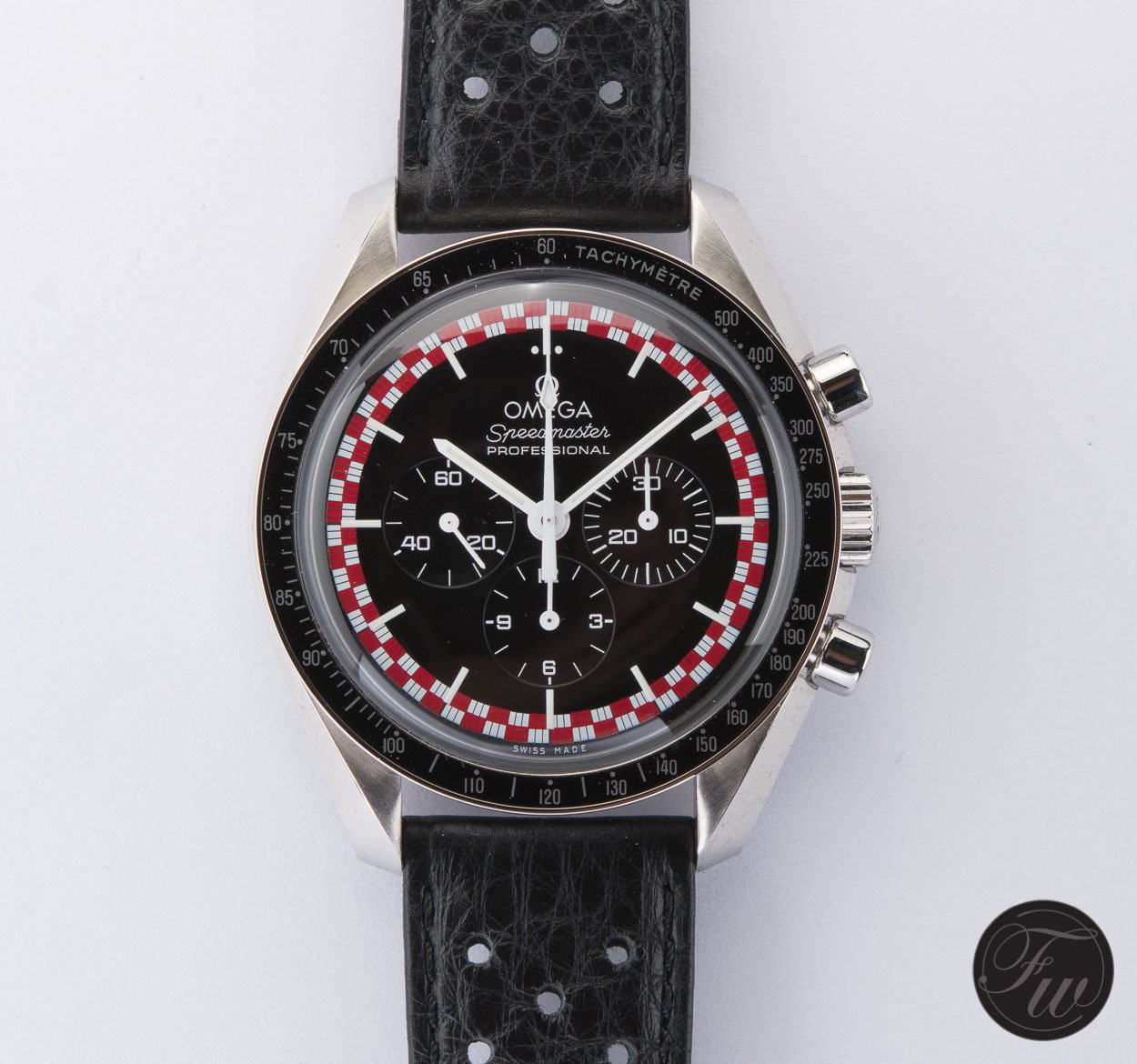 What Can We Do About It?

We get several emails from our readers who are bothered by the fact that if you don’t have a good contact at a retailer or boutique, you will miss out on these watches these days. With all due respect, that can’t be the intention for these Speedmasters. They are meant for collectors and enthusiasts, and sure they will end up with them in the very end, but not before some speculators made some good profit on them. 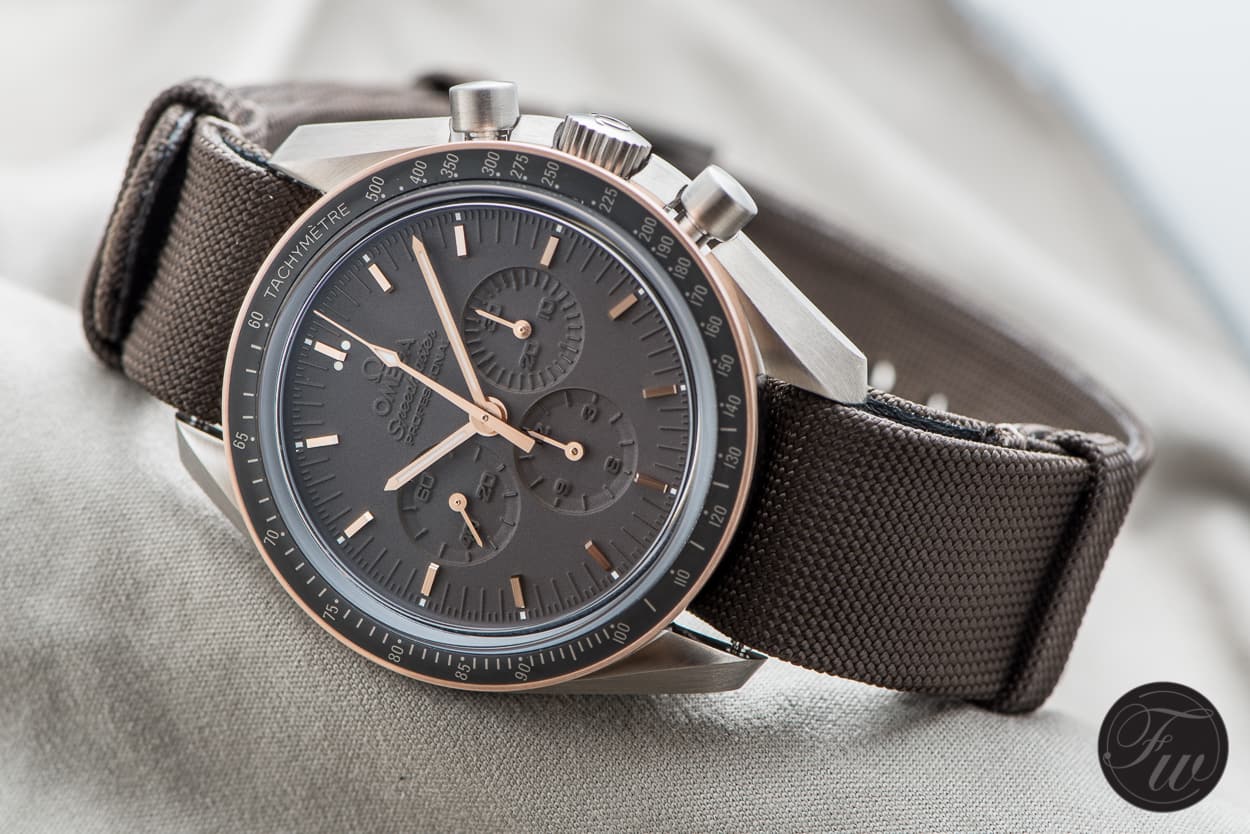 So, how can you make sure you will end up with the Speedmaster that you really want? Personally, I made the mistake by waiting for too long with the Speedmaster Apollo XI from 2014. The titanium model with Sedna bezel that is. I wanted it very badly, but since The Netherlands is only a small market, only a few were destined to be delivered to a couple of dealers here. Then, I noticed one in Italy in the Omega boutique when I was there. It retailed for around €6000 if I am not mistaken, but at the time I said to myself: Let’s wait till they drop a bit in price. But that never happened. Instead, they went up to the 10000USD mark as well in the last two years. I still want it very bad, but I don’t feel like pulling out 10000USD (or Euro in my case) from the ATM even when I feel that this watch will go up much higher in the future. It is a thing of principles I guess. Since this mistake I made (and corrected again with the 2015 Snoopy), I learned that you should not wait. Pay retail, do a down payment if necessary and be quick. That’s the only way, for now. Until Omega (and other brands) come up with a solution on how to deal with this. I am confident that Omega also rather see you in their boutique to buy a watch rather than you buying one via a non-authorized dealer who adds a premium to it. The brands have absolutely no gain or interest in losing you as a client to one of these dealers. The problem is, that the dealers are still able to source their pieces from retailers and ‘friended’ boutiques. I assume that this is a difficult thing to stop and here’s where direct selling of these limited editions might be the answer. That said, even with the Speedmaster Speedy Tuesday last year that was only being sold online, there were orders from speculators (of course). But at least those with no good contacts or relationship at all with a dealer could order one directly from Omega. The only thing we didn’t expect was the massive run on them, I thought it would take a few days at least. But these things need time, to be able to analyze and address the things that should be optimized or fixed.

Although I cherish my Speedmaster Silver Snoopy Award a lot, and the ‘associated’ Snoopy model from 2003 and the Apollo 13 limited edition from 1995 as well for that matter, it did create something that I see as undesirable. There are basically two types of watch collectors, those who really have a passion for watches and speculators. The last type we’ve seen for years now on the market of vintage Rolex and Patek Philippe, but our beloved Speedmaster also has become pray of the speculator. Will it be just a matter of time before the bubble bursts? Pushing a brand new Patek Philippe Nautilus 5711/1A (retail €28000) in the market for well over €40000 sounds realistic to you? That’s the stuff that is happening right now, and I hope collectors won’t fall for it. The only way to get speculators away from a watch is when there’s no demand for these watches at such crazy premium prices.

Go here for our Speedy Tuesday Archive with over 300 Speedmaster articles.