The King Seiko 44-9990 Is An Undeniable Vintage Masterpiece

The King Seiko 44-9990 is a classic reference from the Japanese brand that seemingly makes (or has made) a watch for everyone. Incredibly, this dressy watch is approaching its 60th birthday. Good design is good design, though, as it is the basis for an incredibly popular current series of watches with the King Seiko name. Today, we’ll look closely at this style icon and discover why it’s still relevant.

A quick gander at the interwebs will reveal a number of well-informed articles on the history and development of the King Seiko 44-9990. I’ll refer to some of those along the way and keep the historical exposition brief. So, why feature this watch on Fratello at all if plenty of other reference materials exist? We’ve covered the return of King Seiko extensively. However, the original watch has never been featured in its own article. It was time to change that. 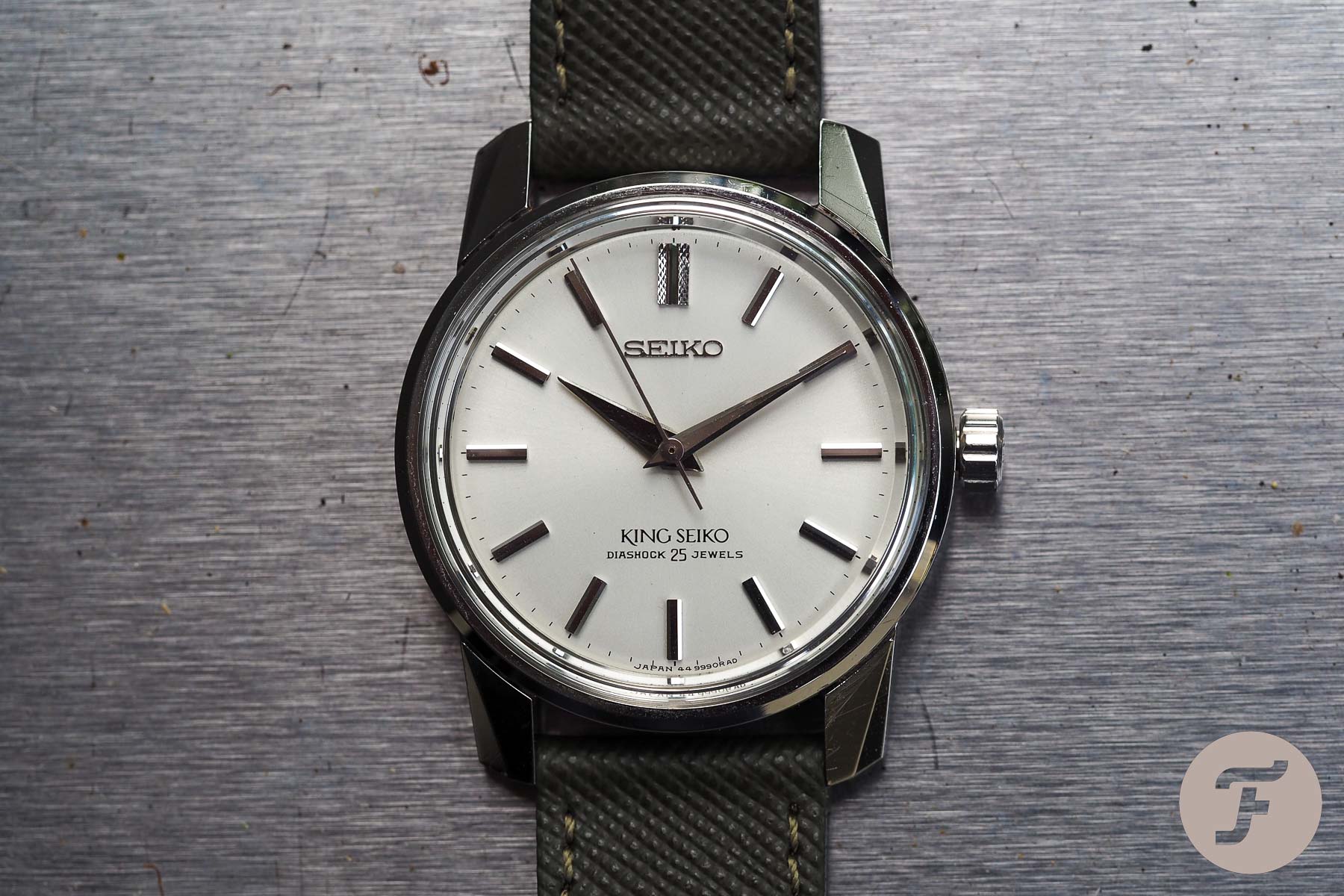 Lore — and an incredibly well-written article on Beyond The Dial — tell us that the King Seiko 44-9990 was first introduced in 1963 and produced through 1968. The watch marked the second generation of King Seiko models and was the first under the sub-brand to feature Taro Tanaka’s “Grammar of Design” traits. Rather than detailing the four fundamental tenets of this design language, I’d simply prefer to remark that this watch was King Seiko’s first unique design. Both the first-generation King Seiko and the earliest Grand Seiko models are nice, but they hardly stand out versus dress watches from other brands of the day. A watch like the 44-9990 was King Seiko, and really Seiko on the whole, gaining confidence and establishing itself as more than a workaday watchmaker. 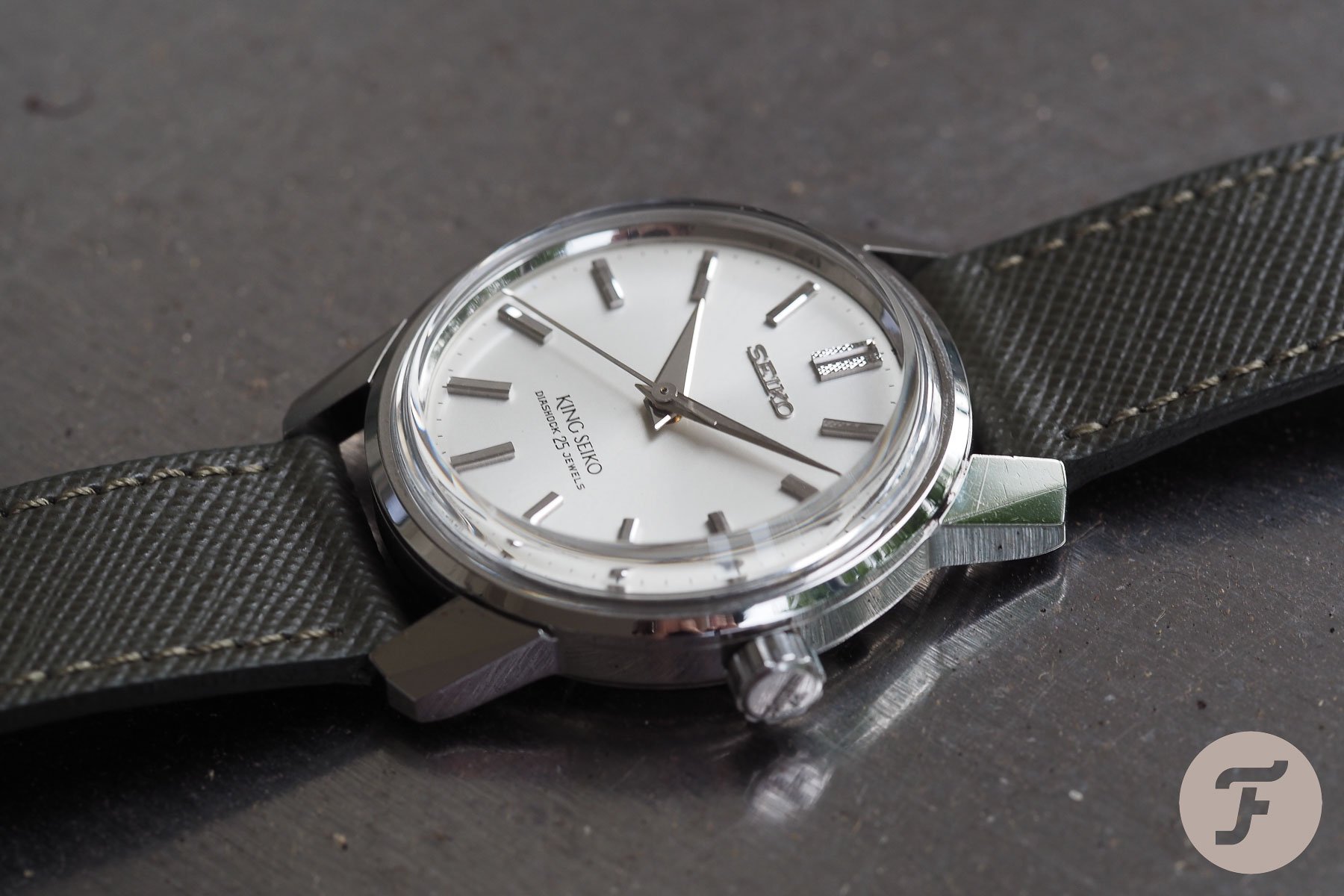 The King Seiko 44-9990 is a stainless steel dress watch measuring 36.5mm × 43mm × 11.5mm with a 19mm lug width. It features a screw-in case back adorned with a gold medallion, model info, and serial number. Seiko outfitted the watch with a tall, thick acrylic crystal that adds welcome depth to the silver dial. It has a signed “Seiko” crown with a “W” denoting water resistance. Finally, although it is missing on my model, an ornately signed pin buckle would have been part of the package. 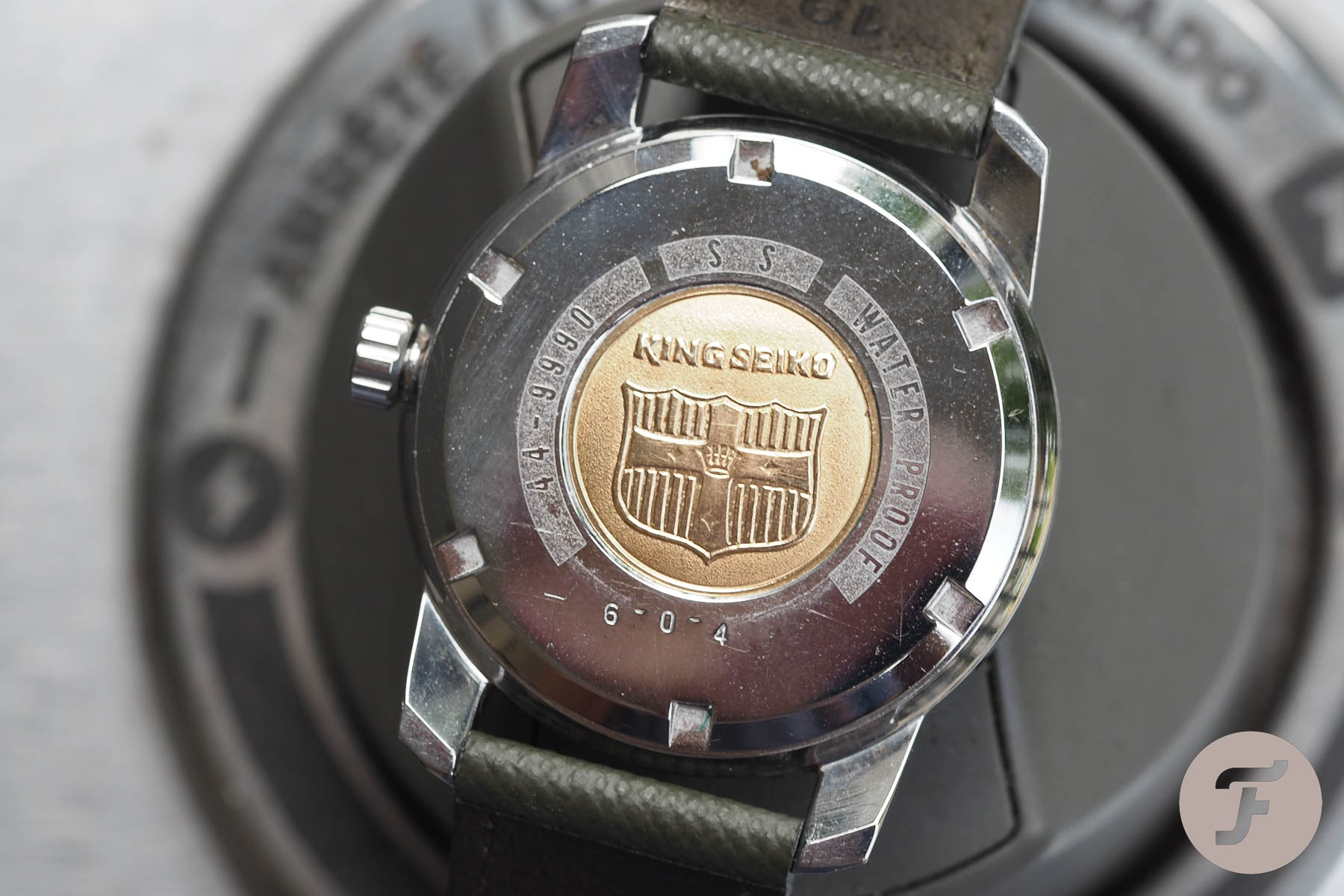 Unlike today’s King Seiko models (and I consider this a near-cardinal sin), the original had an in-house hand-wound movement. The 25-jewel 44A movement (often referred to as the 44KS) features hacking and runs at a leisurely 18,000vph. It’s a famous caliber within Seiko’s history and is known for its accuracy and robustness with a slight caveat. The original version of the movement used a thin hacking lever that frequently broke due to fatigue. As such, Seiko made a change somewhere around 1965, integrating the hacking mechanism into the barrel bridge. The movement, as noted on the dial, has Seiko’s Diashock shock protection system. 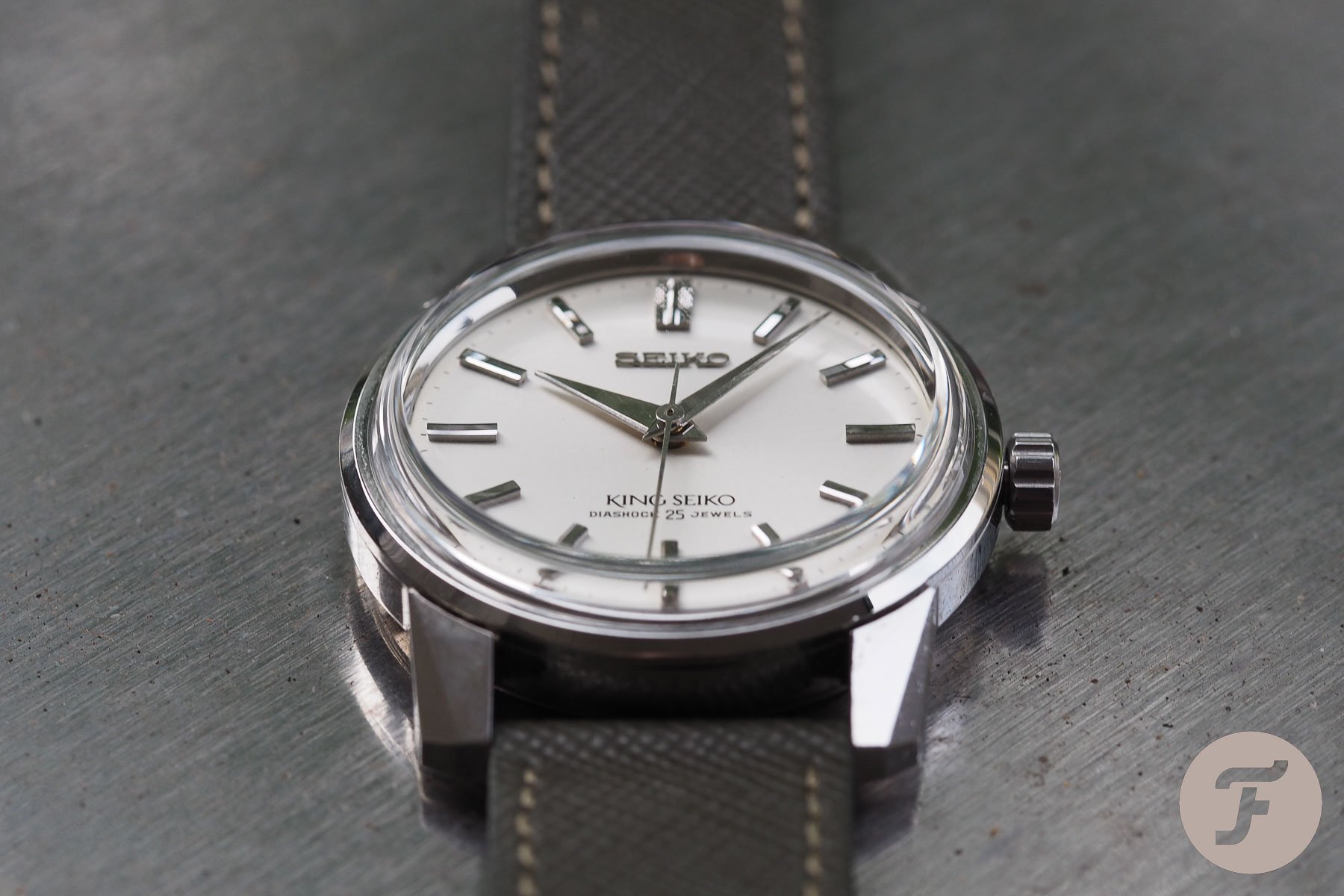 Now that we’ve covered the key specifications, let’s get into why the King Seiko 44-9990 is a watch worthy of its iconic status. One of Tanaka’s non-negotiable points was the elimination of typical round watch cases. The outcome of this regulation spawned some of the most beloved Seiko designs thus far. Some, such as the Grand Seiko 44GS or King Seiko 45KS, are incredibly dramatic with their sweeping lugs, hard angles, and stark surface transitions. This 44-9990 is far more subtle. Until one examines it a bit more closely, that is. 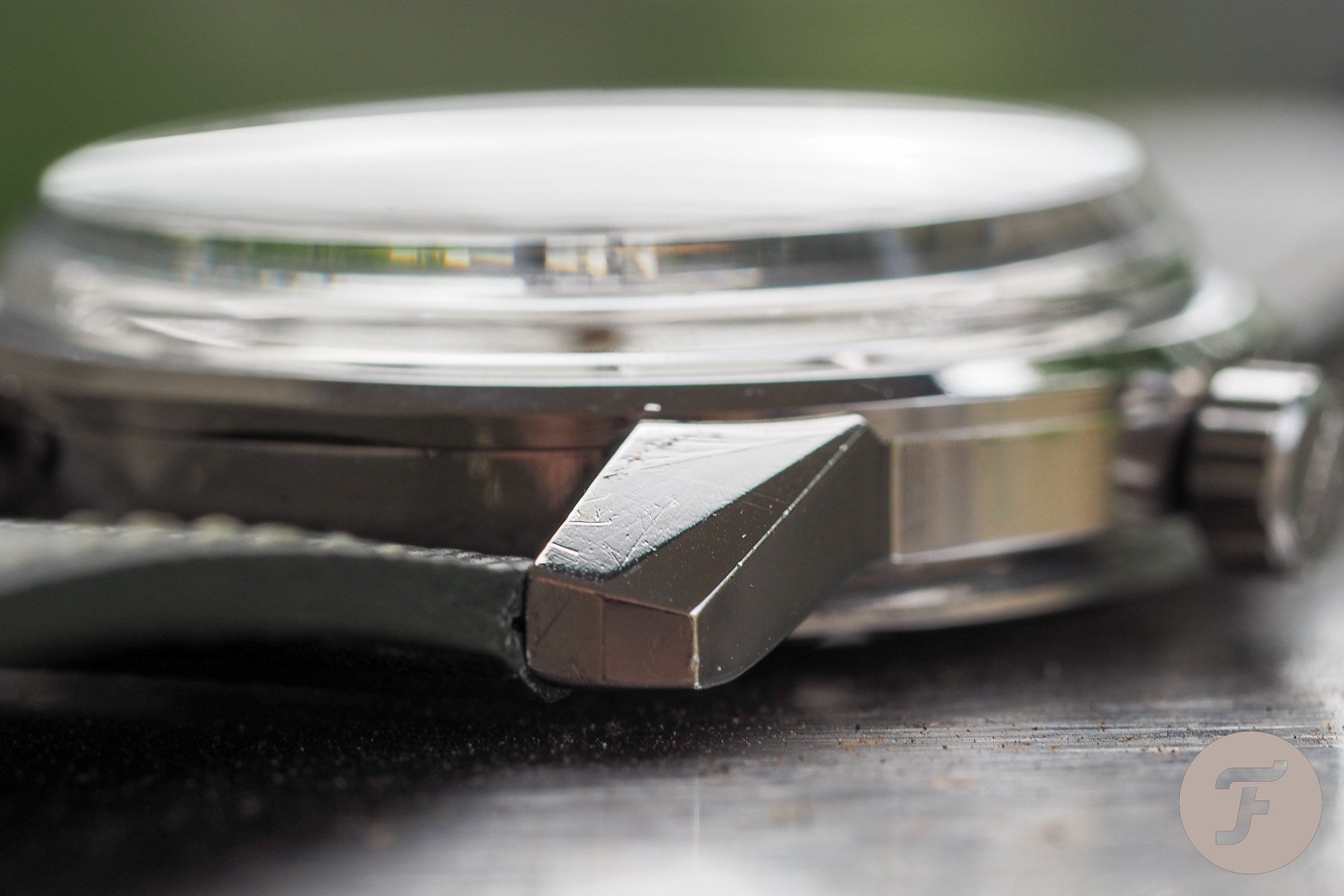 The lugs are the silent killer in a leading role

Depending on how the King Seiko 44-9990 is viewed and if there is sufficient lighting, it can either masquerade as a homely snoozer or it can light up the room. Frankly, this dual personality is what led me to dismiss it up until now. For whatever reason — perhaps it was a photograph in the right lighting — I rediscovered the most magical characteristic of this watch. That epiphany set me off hunting and led to an eventual acquisition. The detail I’m referring to, of course, is the lug design. Taken head-on in bad lighting, the watch is fine, but the lugs simply look thick and clumsy. Add just a bit of a reflective angle, though, and things change dramatically.

Tanaka added a massive mirror-polished (was it Zaratsu?) triangular chamfer that began at the case and finished at the lower edge of the lug. In some environments, the chamfer is illusory and makes its portion of the lug disappear into thin air. The result is a lug that looks smaller and as if it flows from the case organically. When viewed from other angles with the right illumination, the chamfer is loud and proud, almost sparkly and jewel-like. Almost all Grand Seiko and King Seiko cases are worth owning, but the multiple personalities embodied within the King Seiko 44-9990 just might make it the most endearing. 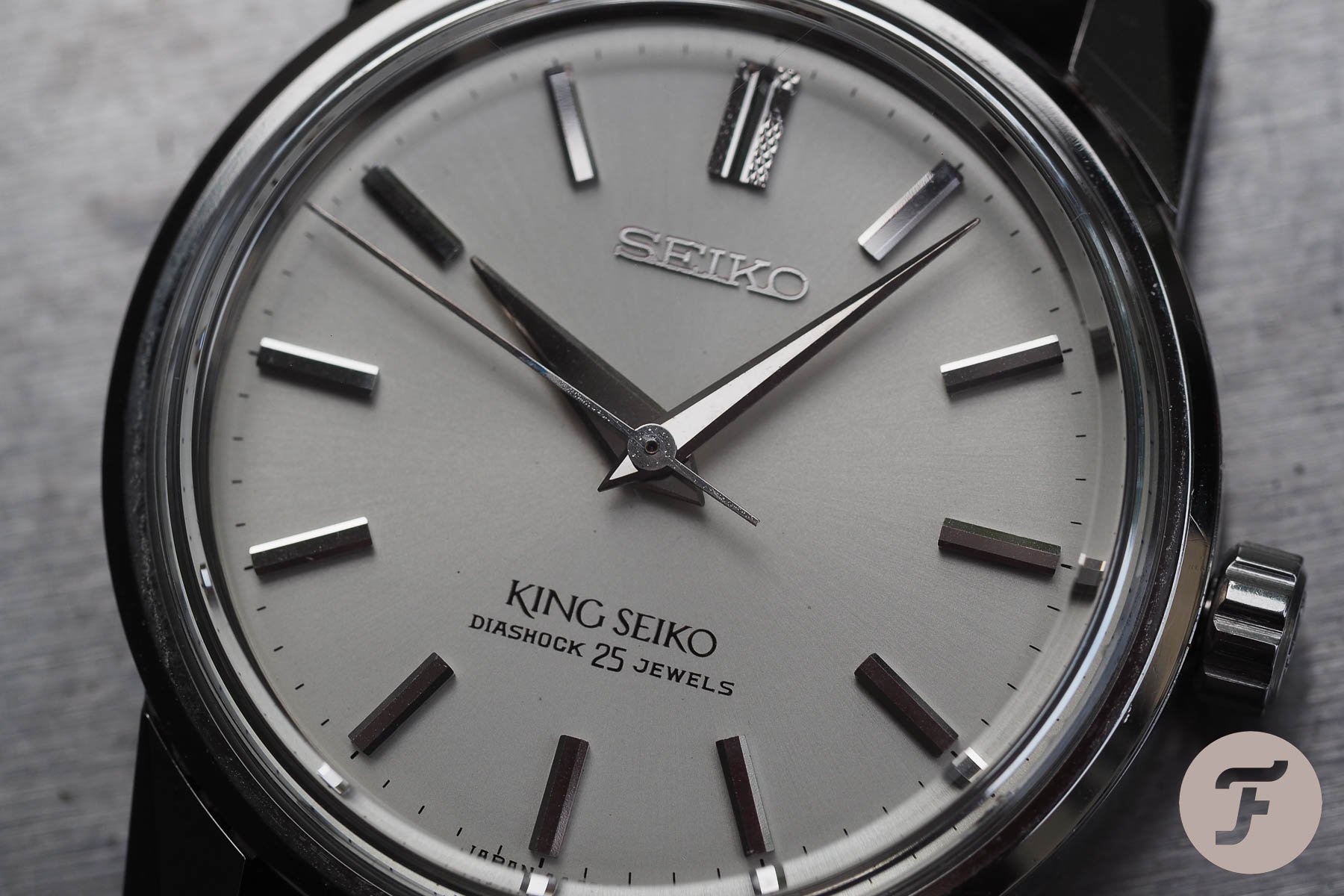 When the supporting actors aren’t bad either…

Of course, the King Seiko 44-9990 wouldn’t make its way to legendary status based on a case design alone. The dial composition is also memorable. The ’60s and ’70s championed the use of austere silver dials on dress watches. The 44-9990 is no different, but it subtly adds its own take on the standard format. King Seiko used rhodium-plated applied elements for the indices, logo, and hands. Nearly 60 years on, they still stand brightly. What I find memorable here are the proportions. The indices are slender and sculpted, with a knurled double version at 12 o’clock. It’s evident from a side glance that all have decent height, and they come off as exquisitely crafted. I also enjoy the oversized dagger hands and how they set off against the needle-like sweep hand. The overall balance, which includes the font placement and sizing, is spot on, and the execution is only aided by the omission of a date window. As an aside, that latter comment is evidence of yet another clunky mishap on the two most recent limited-edition King Seiko models. 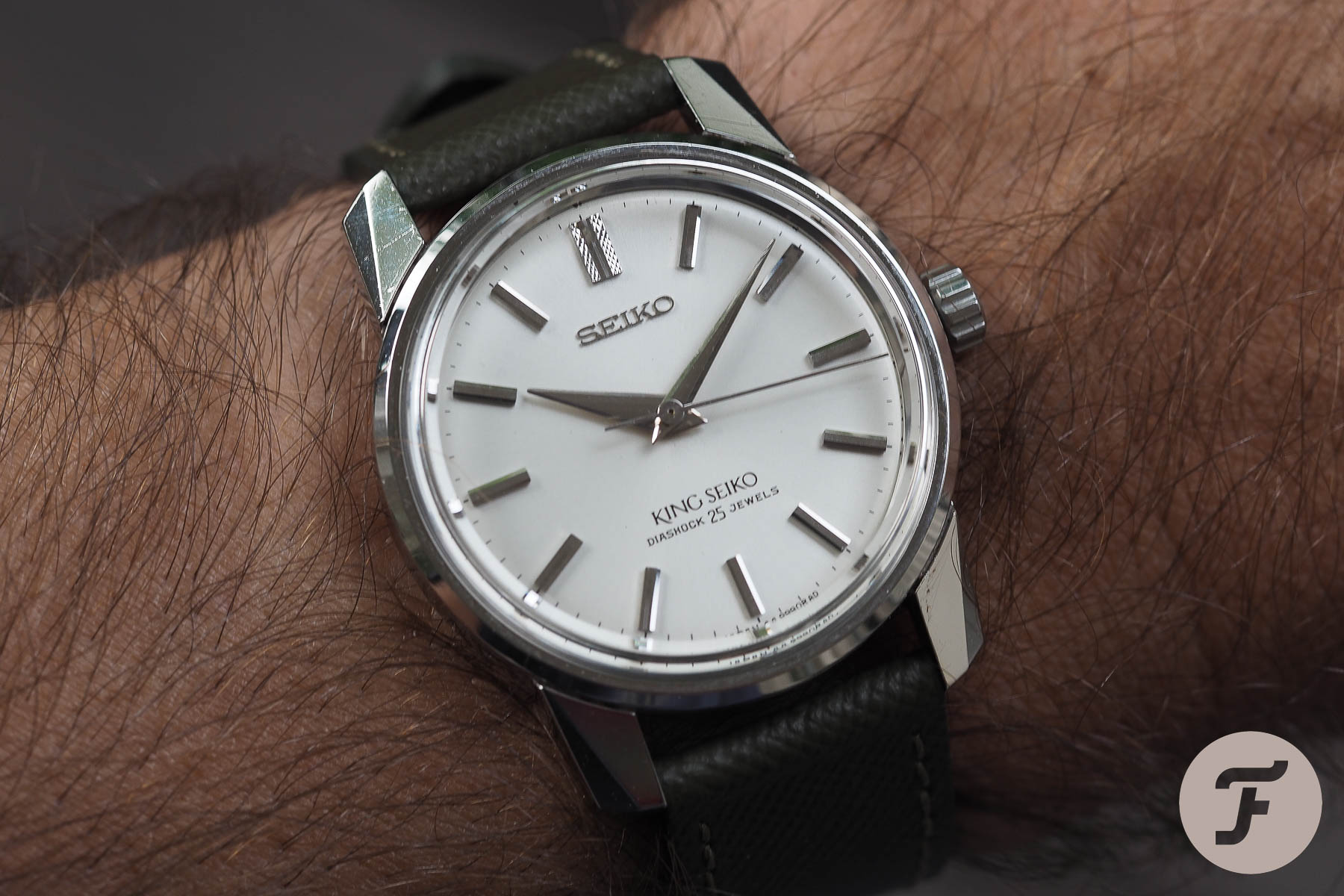 Wearing and living with a classic

Despite its age and dressy intent, the King Seiko 44-9990 acts like a modern everyday watch. I credit the thick lugs and the slim bezel for upping the visual size quotient. It was common practice, and still largely is, to pair watches like this with a black or dark brown reptile strap. That’s fine, but I’m learning a lot from my podcast partner Balazs, and he has pointed me in the direction of Saffiano leather. For these photos, I’ve paired the watch with an olive-green piece from GLC Straps in Rome, and I think it’s perfect. It has also allowed me to wear this watch with just about anything, thereby excusing it from functioning solely as a formal piece. Plus, with the typical solid Seiko build quality, it actually feels like a watch that I could wear every day. 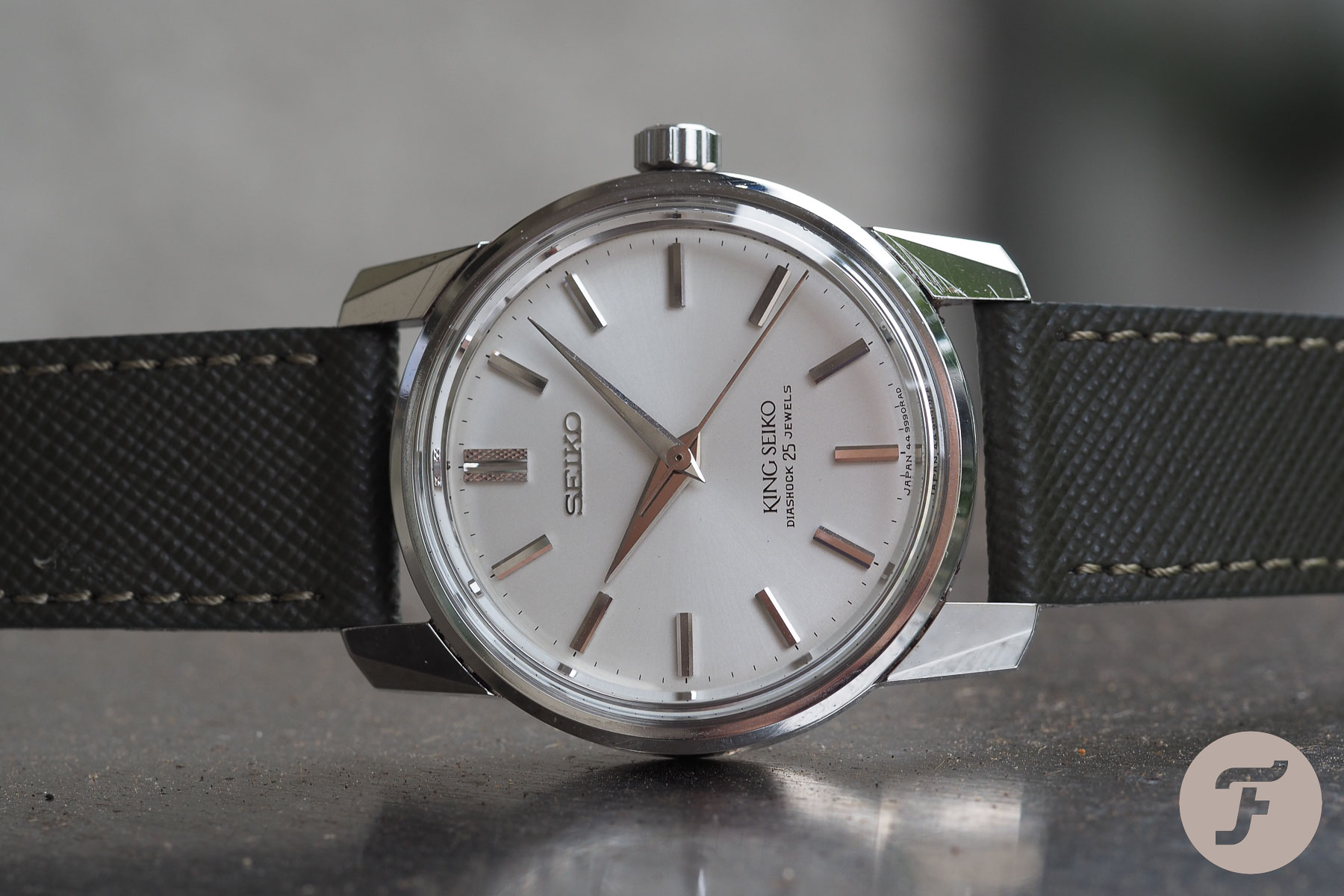 Final notes and finding yours

The King Seiko 44-9990 is a popular watch with collectors, but examples are available on typical Japanese auction sites. There are some Western-based sellers with vintage Seiko as well, and that’s a nice alternative. Sure, buying close to home is often more expensive, but customs and servicing are covered. Since the re-emergence of the King Seiko name in Seiko’s greater lineup, the 44-9990 has received more attention. For a nice example, consider somewhere in the range of $1,500. Look for typical issues such as dial spotting, missing/rotten case back medallions, and broken hack mechanisms. Most crucially, though, check for case polishing. Owning a polished example of a 44-9990 where the case dimensions have been lost is simply not worthwhile. The positive is that at least there are reputable case-restoration services specializing in Seiko that do a fantastic job.

In my mind, there’s little doubt that vintage Grand and King Seiko are still criminally undervalued. The quality of the watches and the movements were as good as the best in Switzerland during this period. Most importantly, though, the watch world should sit up and recognize the creative impact of Taro Tanaka in the same way that it considers, say, Gérald Genta. His watches were so different than most of what was on offer at the time. For certain, many of Tanaka’s designs weren’t available globally and, thus, are still not as well known. If you’ve ever considered adding something like the King Seiko 44-9990 to your collection, now seems to be as good a time as any.