If the name sounds familiar to you, it is no coincidence. There already was a Longines Heritage Military before but in the current collection, there’s only this one today and we review it today for you. 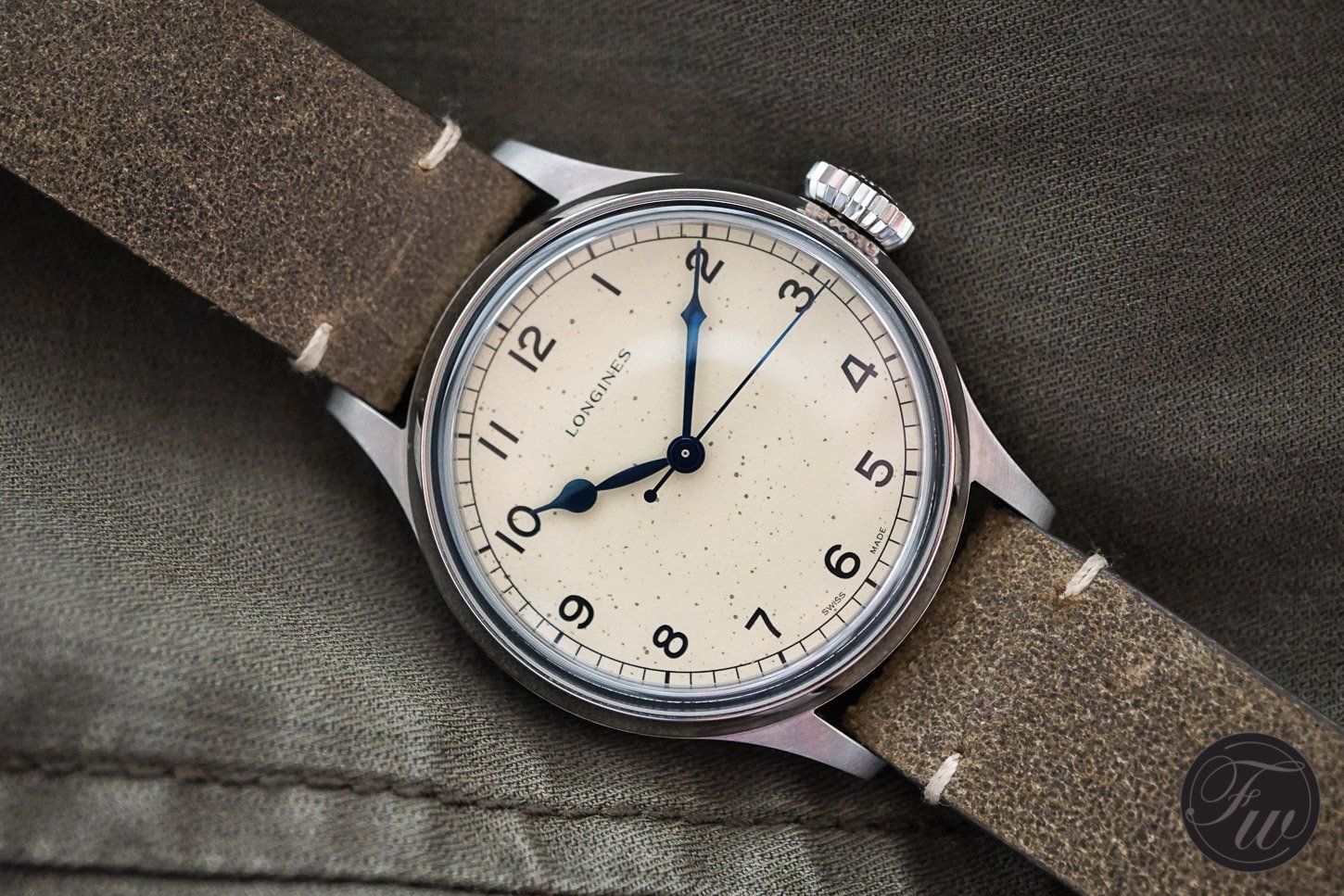 The Longines Heritage Military takes inspiration from the pilots watches used by the British Royal Air Force during World War II. You might have seen very similar models from Omega, most recently in the movie Dunkirk – as Tom Hardy’s character, an RAF pilot, is wearing one. Though that watch had a large steel bezel it is essentially the same design. Longines produced the same watches with and without the steel 60-second bezel just like Omega. They were special orders from the British Ministry of Defence (MoD) and were delivered at the beginning of the war. Royal Air Force used them, pilots and other personnel alike. The watch that Longines used as inspiration actually belonged to a highly decorated radiotelegraph operator. 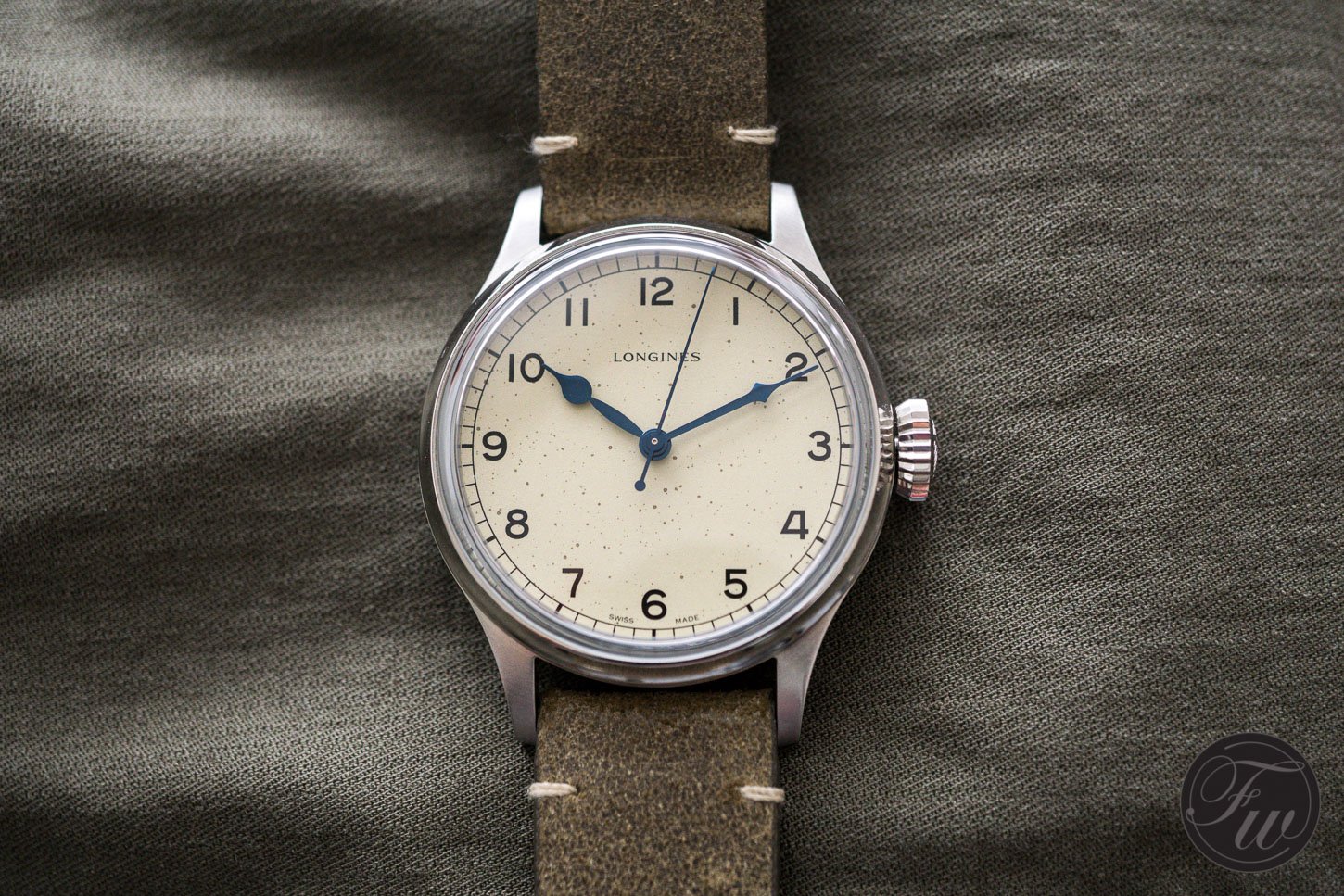 The watches were simple and easy to use. They had a 32mm steel (or chromed) round cases, often with fixed spring bars. The originally drilled lugs were welded in. The dial was simple light – not sure if they initially were white or cream in color. For easy readability on the cream dials, you would find large, black, contrasting, Arabic numerals. The name of the brand was in the same color at 12. The Longines logo was not present, only the name. As the Royal Air Force came to existence in 1918 with this timepiece, Longines not only came out with an amazing Heritage model, they also celebrated the 100th anniversary of the RAF.  No mentions on the watch at all regarding this though. 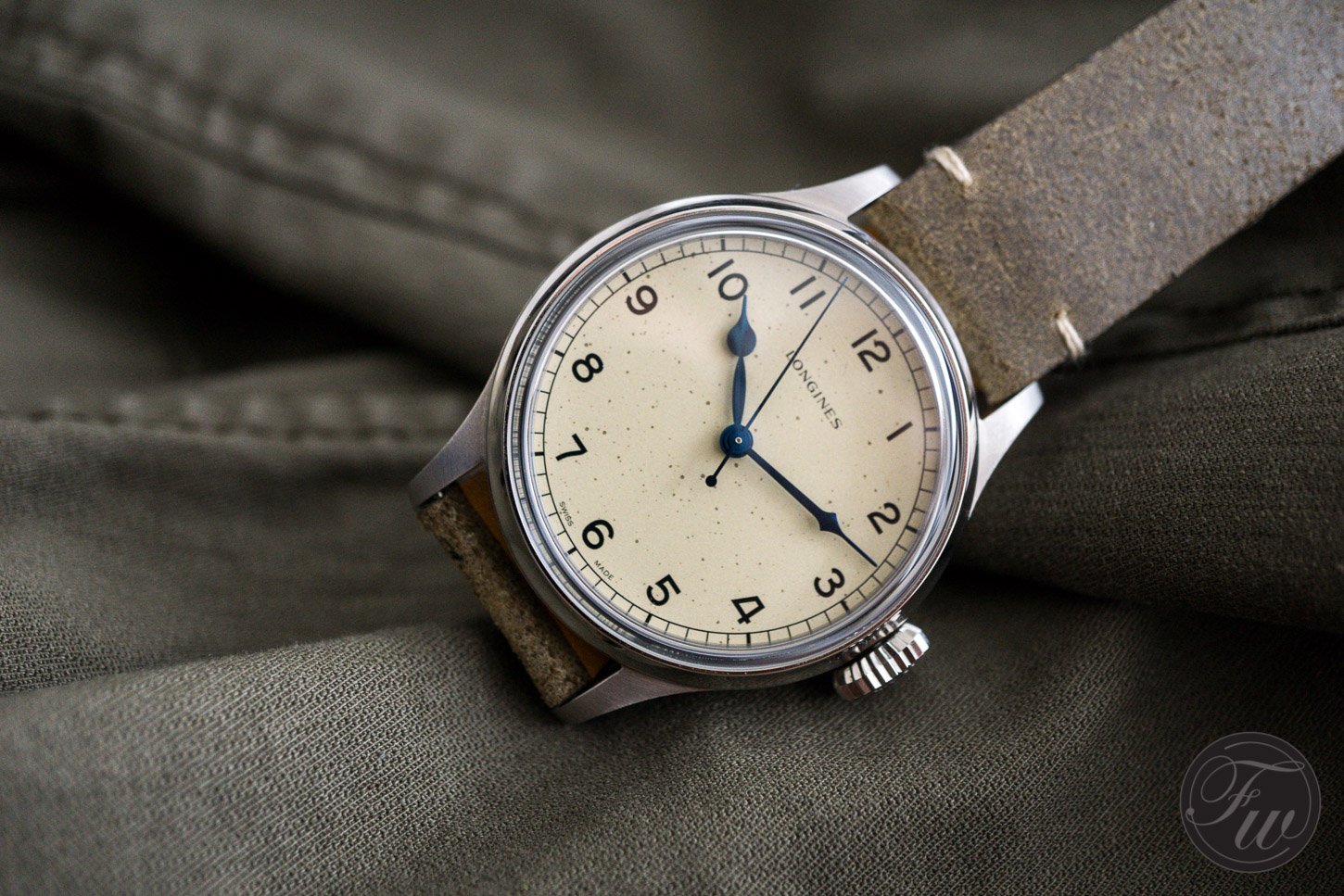 Although this Longines Heritage Military is a beautiful homage to the original watch, these days watches don’t have a 32mm diameter anymore. It is however not overly huge at 38.5mm. As you’d expect from a military piece the case is brushed all around. The only polished part is the bezel giving a nice shiny frame to the dial. For the size of the case, the lugs are rather short and thick. The antique-style crown is larger than the case size would suggest but it was the case on the vintage piece. It is so, that personnel could set the time (or wind the watch) even while wearing gloves. I felt that it was a bit too large at times and even left a mark on the top of my hand. I could have always moved the watch further up on my wrist, I guess. 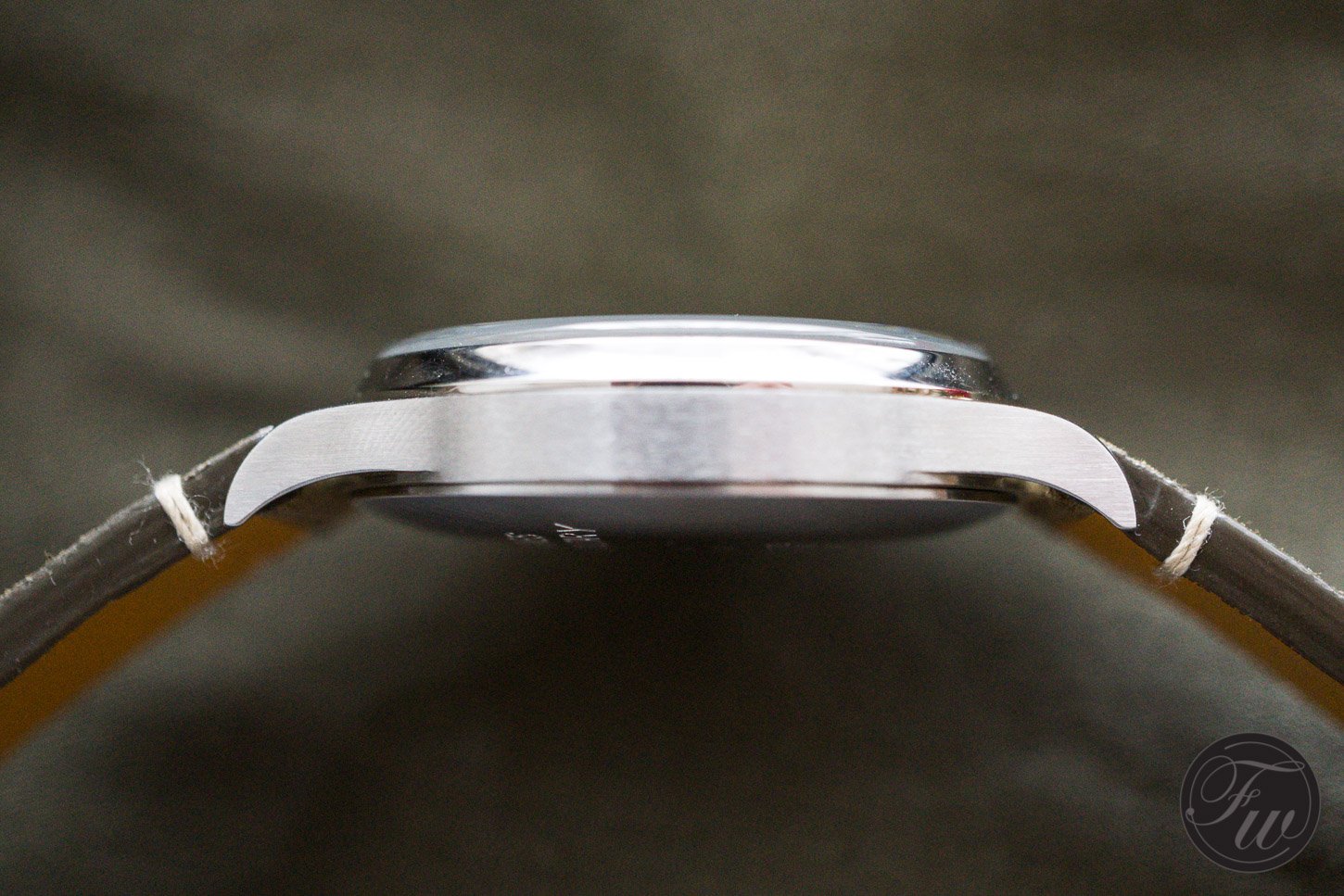 The case back, just like the rest of the watch, is clean and simple. It is as plain and vintage-inspired as the whole Heritage Military. Longines also did not put too much on it. You would see the model name, the reference number and some basic features like water resistance (30 meters) the case material (steel) and the fact that it comes from Switzerland. All in all, the watch has great size and if it wasn’t for the large crown it would have been a perfect fit for me. I know many of you might say that the faux patina on the dial is too much. I hear you. However, this is not an everyday watch but a reinterpretation of a vintage model. Just like all Longines Heritage pieces. You have to look at it as such. And then all of a sudden it becomes a pretty good timepiece. 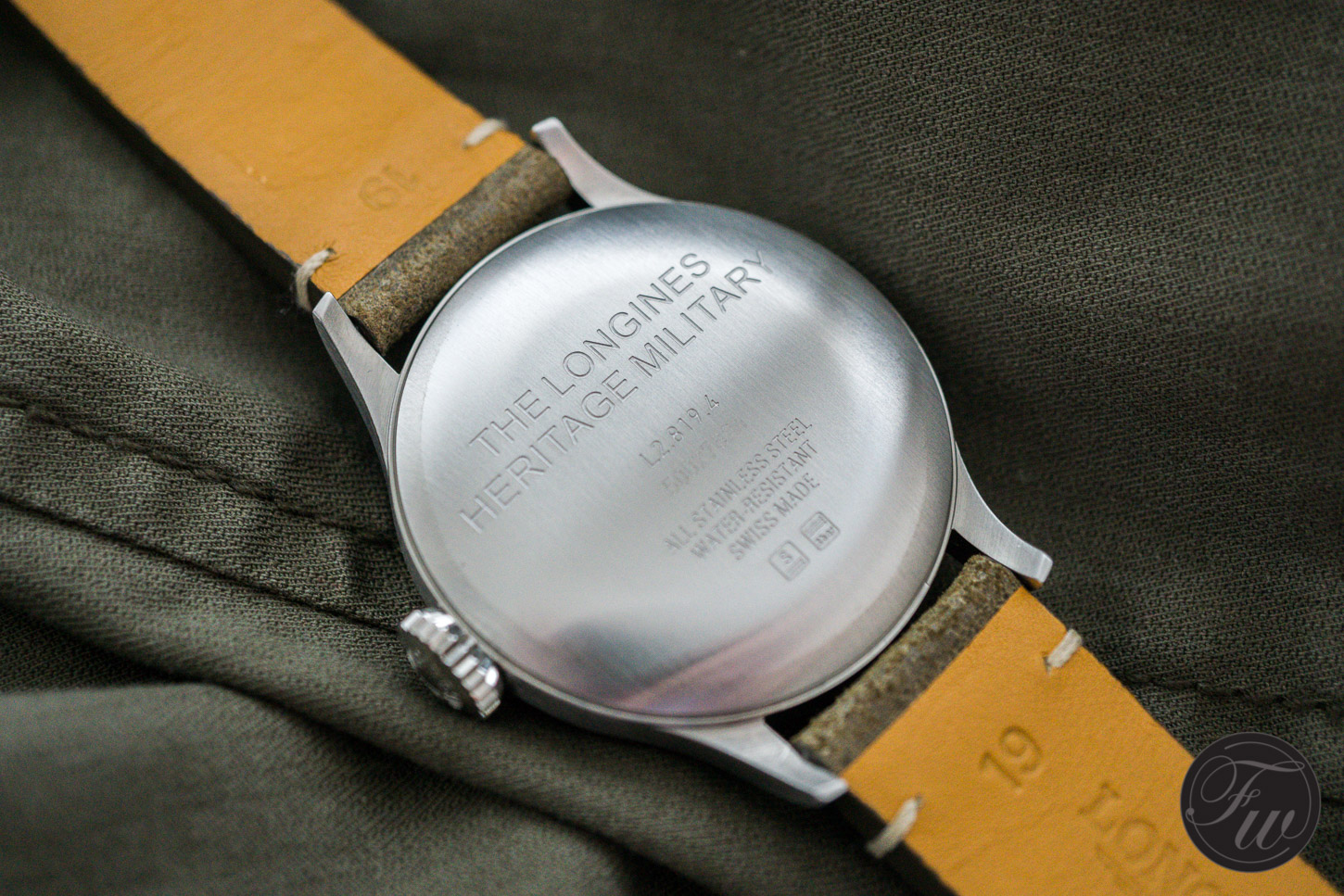 As vintage as it gets

I already talked about the dial a bit above, but let’s look at it in more detail. According to Longines, the Heritage Military has a “silvered opaline” dial but it rather looks yellow – in certain angles greenish. It’s actually a very honest color, one that gives back the look of the 1940’s pieces extremely well. To add to this vintage touch Longines hand sprays each and every dial with black paint. As a matter of fact, the whole dial looks so convincing that I often had to look twice when I came across other watches during my research for this article. The indexes and the name are painted just like the minute scale around the dial. As it is a military (homage) piece the face is clean, simple and easy to read. The beautiful blued steel, spade-shaped hands are exactly the same as the one you’d see on the predecessor. 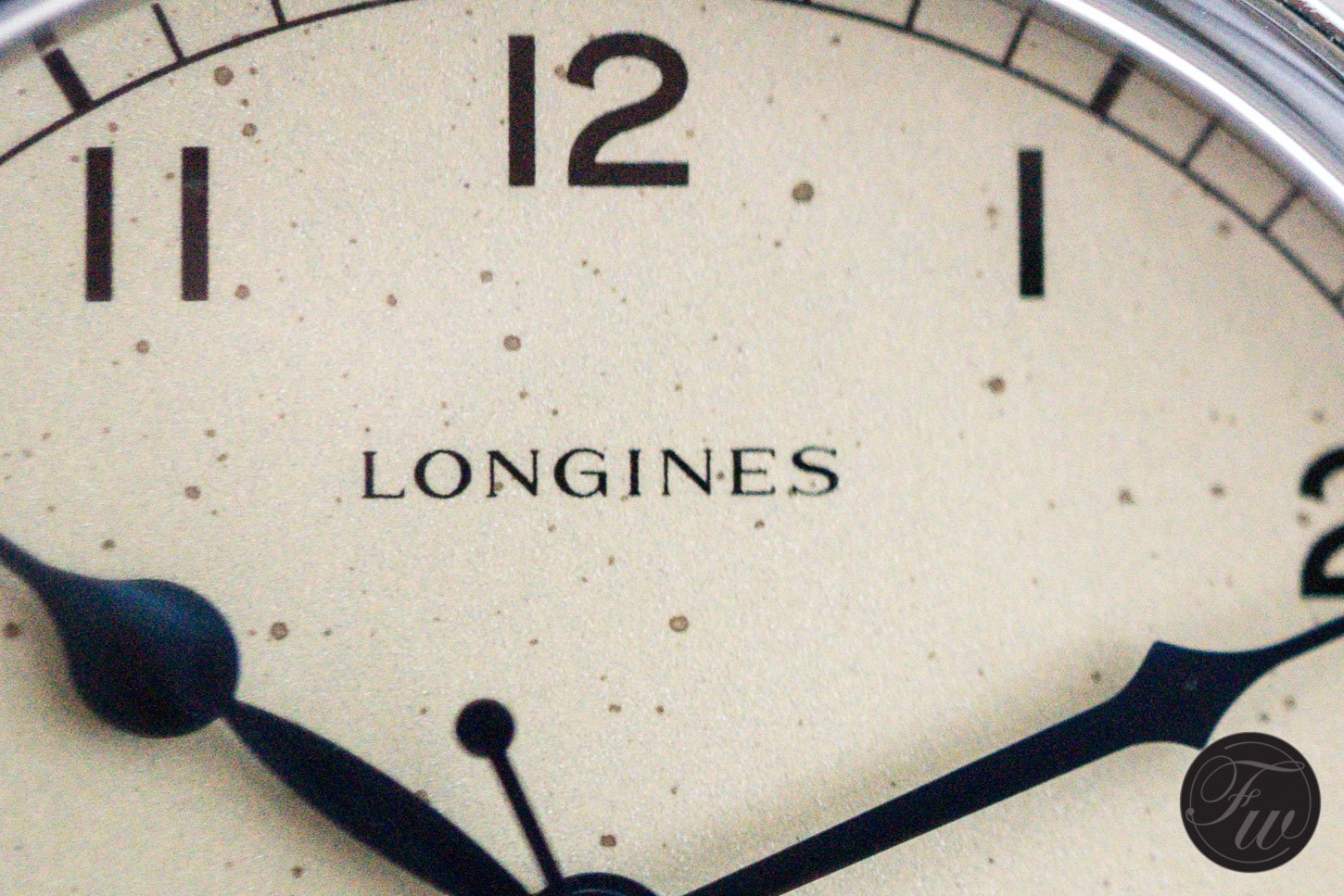 The simplicity of the dial and case continues inside the watch. As a true homage of a bygone tool watch the Longines Heritage Military has absolutely no complications. Not even a date, thank God. The brand a few years ago release the Legend Diver with and without date and the no-date version are much more popular among watch guys than the dated version. Though the no-date Legend Diver is not in their current collection anymore. Inside the Heritage Military is the Longines’ caliber L888.2 (ETA A31.L01) an automatic movement with 21 jewels, 64 hours of power reserve and a 25.200 vph. It is a sturdy caliber, does a good job and for this piece, this is all that matters. 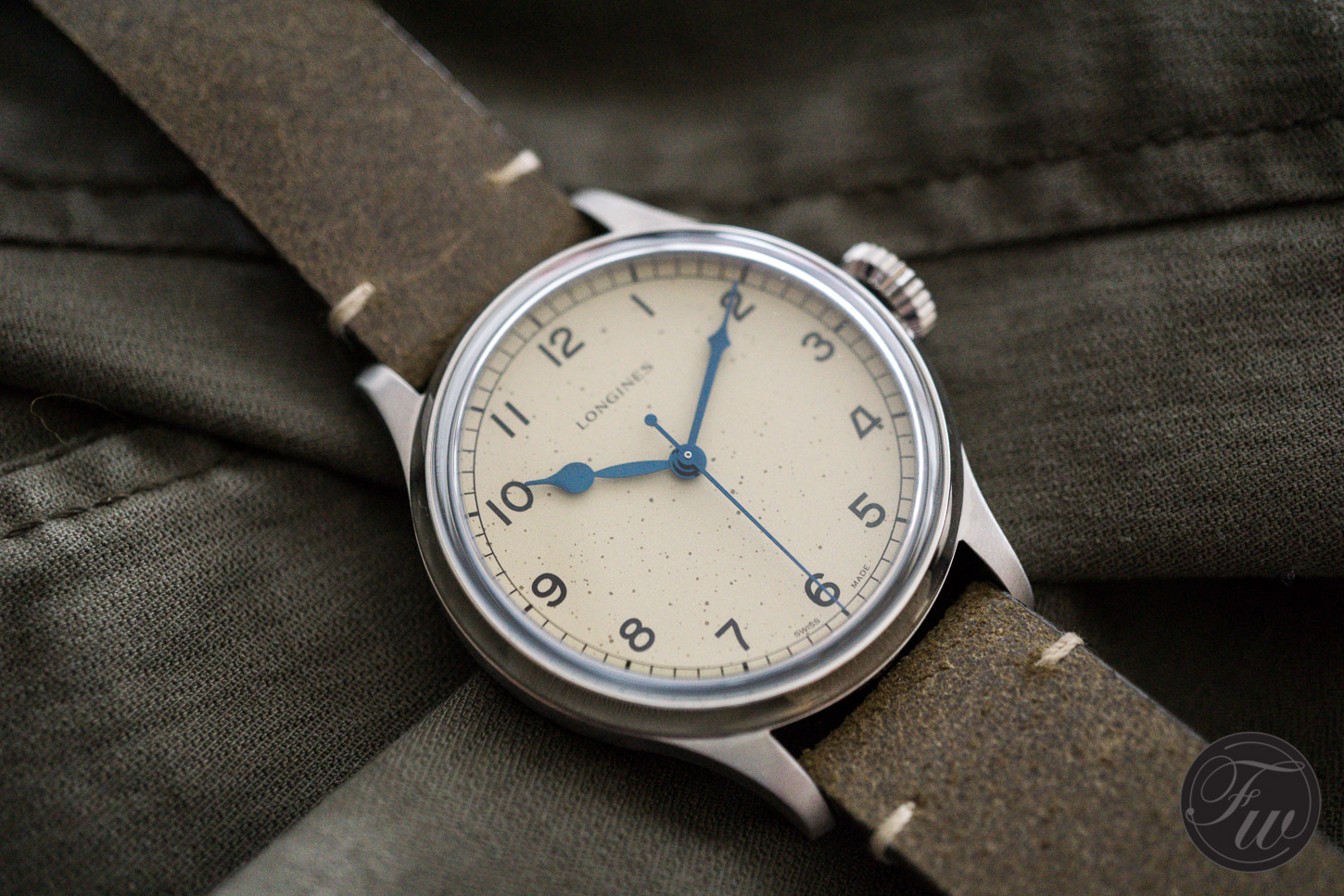 Since the original watches had fixed lugs and came on a leather strap the new Longines Heritage Military has no bracelet. Instead, you can get it on a vintage style green calf leather strap. Now, I know might sound a bit antipathetic when it comes to the straps of certain brands from the Swatch Group but this one is also not the most comfortable in my opinion. The leather is a bit stiff though with time it might change. The edges are a bit sharp and it does not have a nice smooth feel when on the wrist overall. I prefer the suede strap that is on the Longines Heritage 19945 much better. However, the price is very reasonable that makes you forget about the strap if you had an issue with it in the first place. It is €1,840 very reasonable considering what you get for this amount.