A bulldog no more… One of MB&F’s most beloved modern pieces, the Bulldog, was given a facelift in honor of the Only Watch Auction due to be held in just over a month’s time. Now sporting a new panda-inspired livery and a pair of cutesy ears, the horological tricksters once again look to win hearts and minds while drawing attention to a good cause.

Uncharacteristically, I’ve had a pretty good week. As such, smiling is a little easier than usual. However, even on my glummest days, efforts like the MB&F HM10 Panda for the Only Watch auction can’t help but tweak the corners of my lips skyward. It’s not just that this is a desperately cute object that even the stoniest hearted person would find aesthetically titillating, but it’s also the fact this is a genuine, fully loaded, top-to-bottom-credible horological machine in name, canon, and execution. 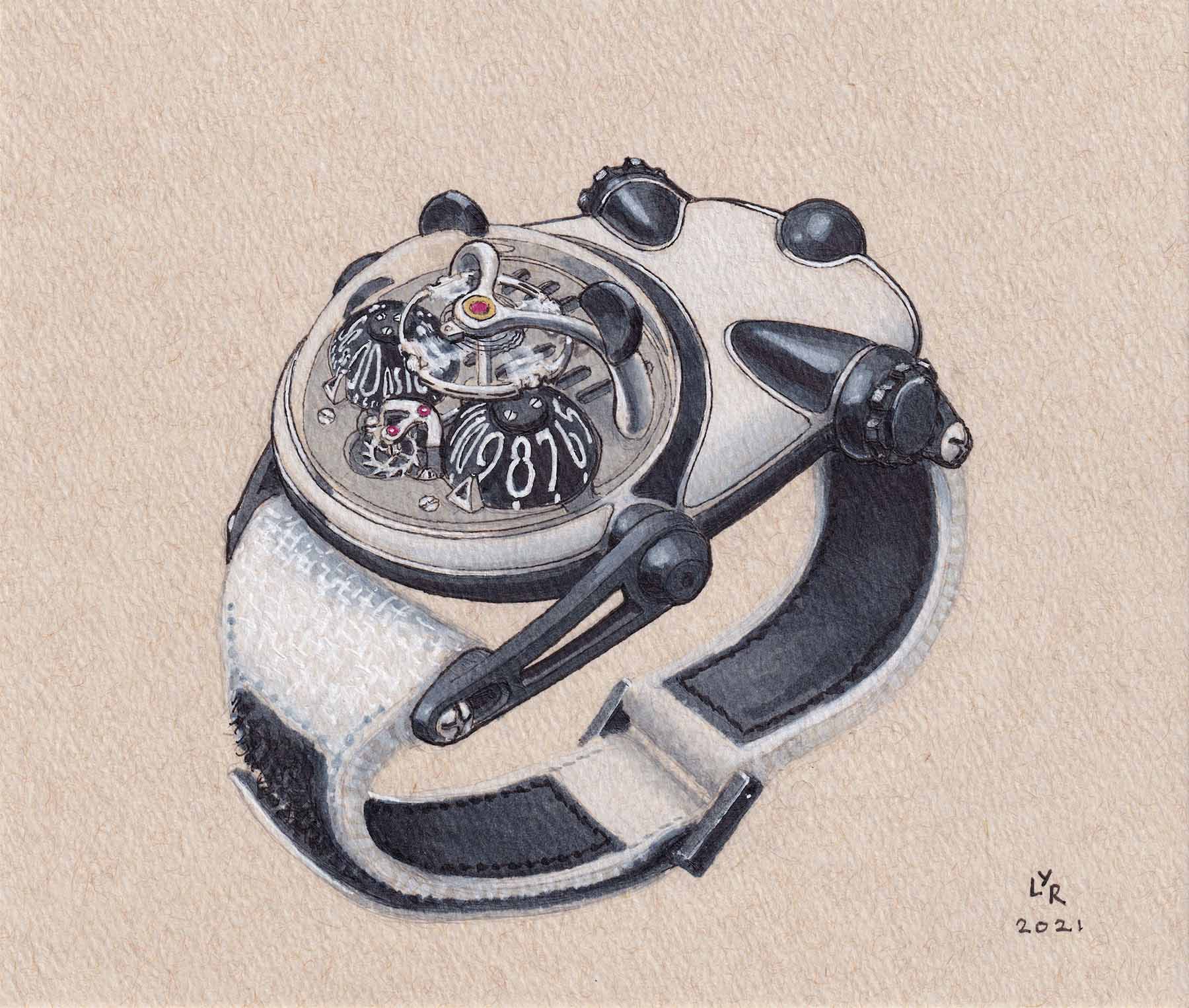 I’m just teasing you with this sketch because… Well… It’s gorgeous. Courtesy of @OneHourWatch.

“This year marks the ninth edition of Only Watch, a biennial charity auction of one-of-a-kind timepieces where 99 percent of proceeds go to fund research into Duchenne Muscular Dystrophy, a genetic disorder characterized by progressive muscle degeneration primarily affecting young boys. This is the sixth time MB&F has contributed one of its Machines to Only Watch, once again going above and beyond in the creation of a truly unique timepiece.”

Up until now, only sketches have been available of this piece. However, unlike with some previous “sketch-first” releases for the Only Watch auction, this one got the message across very effectively thanks to the fact this is an easily communicable update to an existing model. Nothing about the way the Panda works or tells the time differs from the HM10 Bulldog. 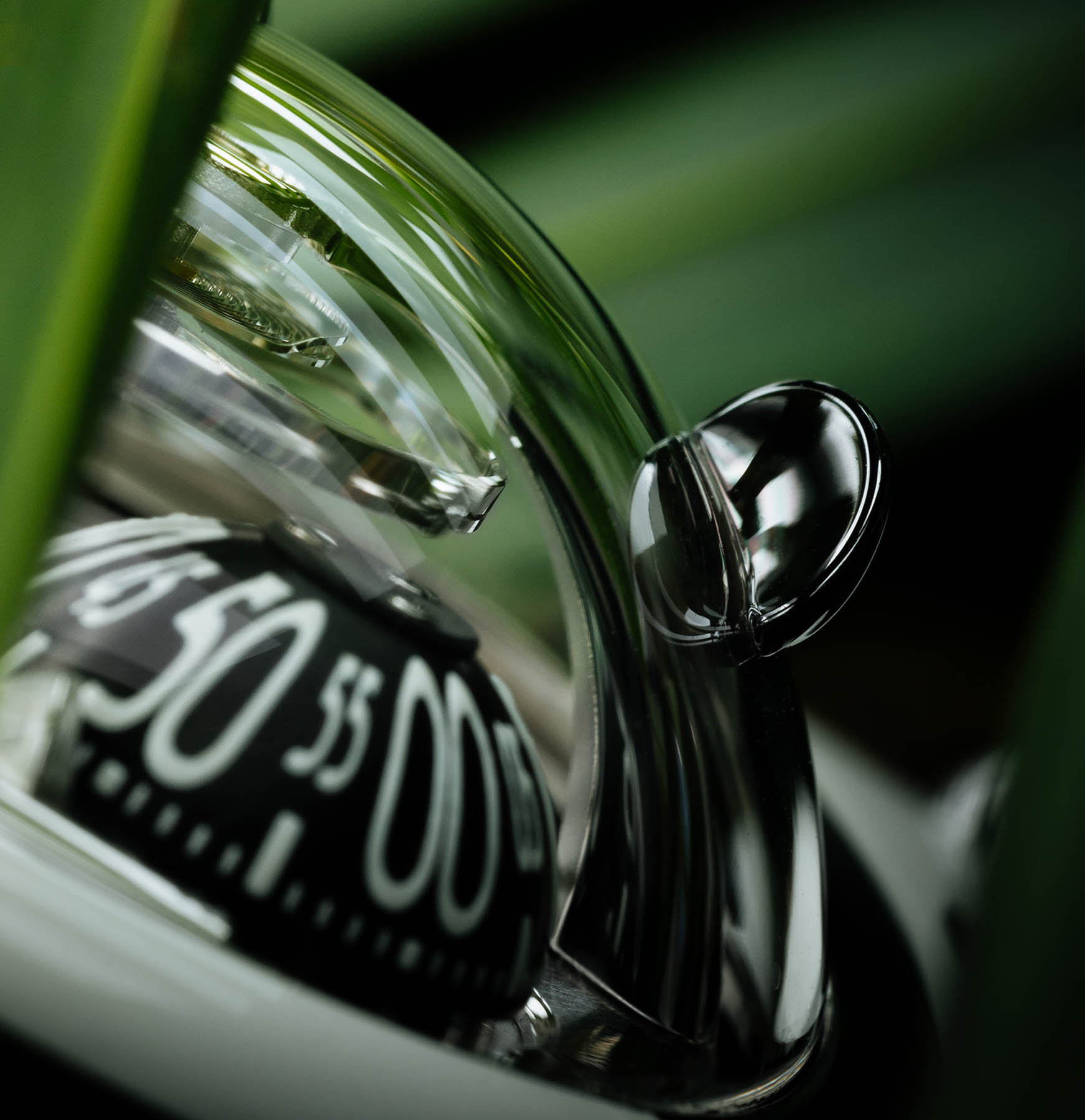 Given MB&F’s insistence that a creative adult is a child that never grew up and the fact that Max Büsser’s first cuddly toy was a panda, it is perhaps unsurprising that this is not the first time we’ve seen the horological collective turn to the rare and beloved creature for inspiration. In 2011, in support of the fourth edition of Only Watch, a miniature panda riding atop a unique HM4 jet was submitted by the brand in collaboration with Chinese artist Huang Hankang. It was, needless to say, a bit of a show-stopper. 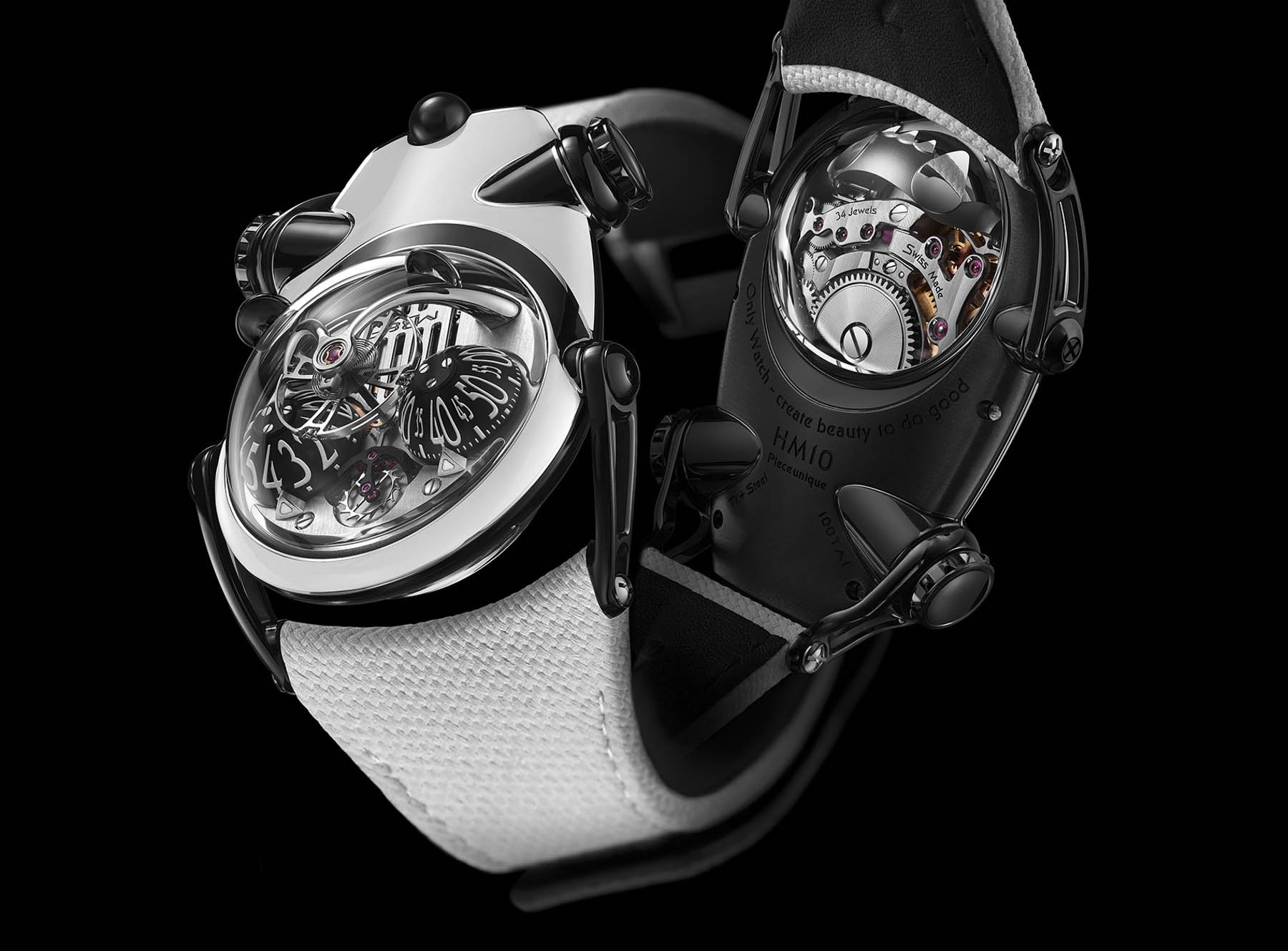 However, I must say, this one is just simply better in every way in my opinion. Now, that is a very personal opinion and I expect some people will put the HM4 at the very top of their grail list and think I’m mad for saying so. In fact, I hope some people think I’m mad for saying so. Why? Because every single one of Max Büsser’s horological machines inspires strong opinions. You might love them all; you might hate them all. Chances are you have your favorites and regard some as failures. Rarely, however, do you find someone with nothing to say on the subject of MB&F.

It is living on the ultimate level. So why not live with a smile on your face?

You may well find the addition of “tiny titanium ears” to be a step too far for your tastes, but for some of us (myself included), it’s the kind of irreverence that makes high-end horology that little less ridiculous and that little bit more credible for the shot of self-awareness it provides. I’ve always thought it was somewhat indecorous and certainly tone-deaf to act like Haute Horlogerie was, by its nature, hyper serious. The pursuit of horological innovation and the acquisition of the ultra-expensive pieces that truly achieve it is, or at least should be, about fun. It’s about as far from survivalism as can be. It is living on the ultimate level. So why not live with a smile on your face? 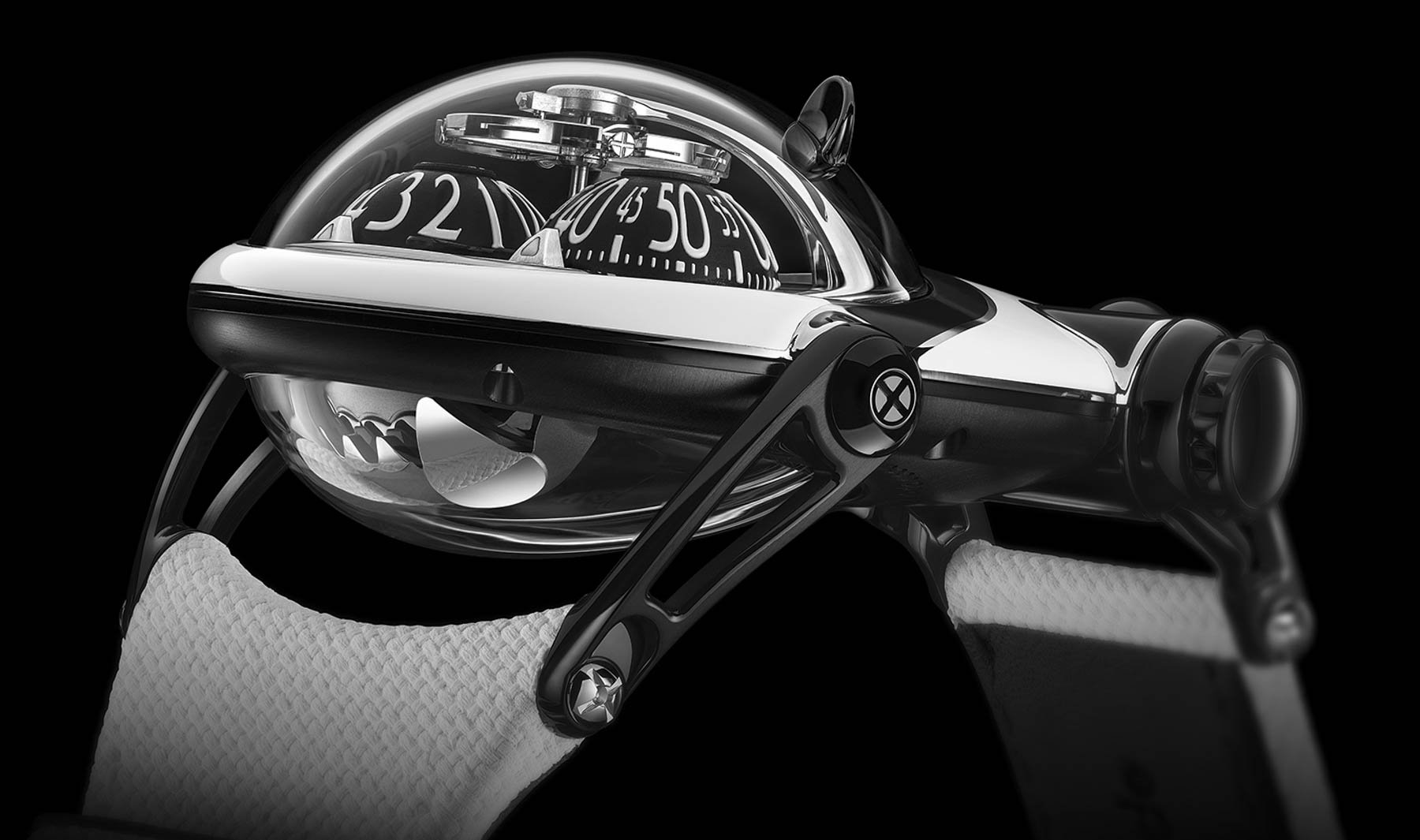 “Much like the panda’s unmistakable eyes, two black aluminum time-display domes dominate the face of the watch — a nod to the other use of the word ‘panda’ in the watchmaking world, where white watch dials with black counters are fondly called panda dials. Other panda bear features include stout yet flexible “legs” that wrap firmly around your wrist and those important panda teeth that are constantly munching on bamboo shoots.

Amazingly, the teeth act as a power reserve indicator. When the panda’s mouth is fully closed, he is exhausted and needs a little poke in the tail to wake him up again. It’s a pretty practical addition to a watch that seems totally silly at first glance. However, its dimensions (45mm across and 54mm “nose-to-tail”) means it is, by virtue of those flexible legs, quite comfortable on the wrist.

While its 24mm height means it’s no shrinking violet, it’s not as if you’re likely to strap this one on as a discreet daily wear whenever you need to pop to the grocery store to top up on bamboo shoots for the weekend… 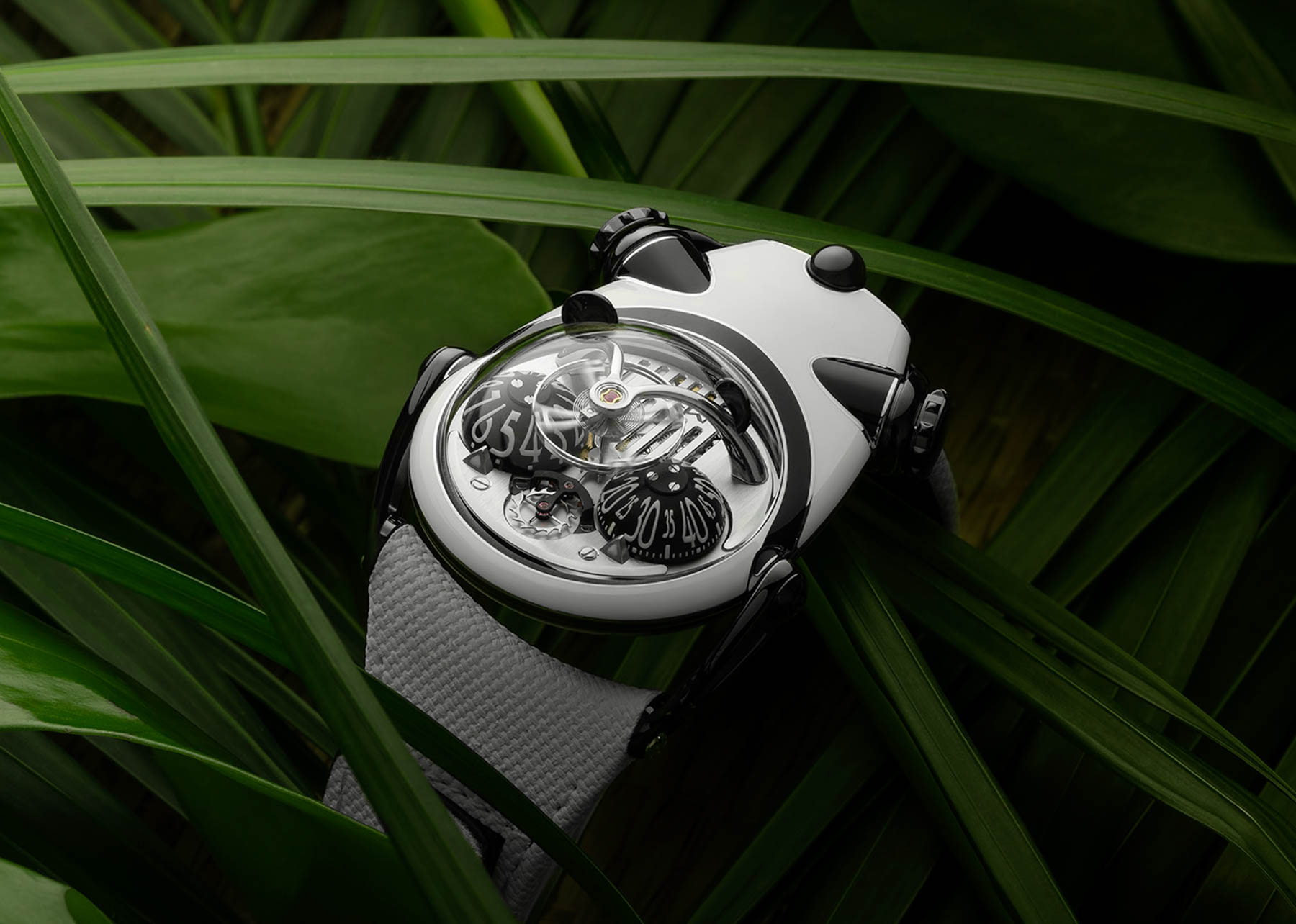 The tech beneath the fur

Beneath the black and white lacquer that covers the stainless steel exterior of the MB&F HM10, there is 18,000vph in-house movement that comprises 301 components. It is a manually-wound movement, driven by a single barrel that imparts 45-hours of power reserve to the mechanism. Time is indicated by way of the panda’s “eyes”, which take the form of two large 3D black discs with white print atop them. There’s only going to be one of these little critters out there in the wild before availability goes extinct. If you want it, be prepared to pay top dollar (although it is all for a good cause so if you have a few hundred thousand burning a hole in your pocket of pure silk why not have a bid?).