The Mondaine Stop2Go wristwatch in all aspects has a movement (cal. 58-02) which looks as close as it gets to the original Mobatime Swiss Railway Station Clock. Of course Mondaine had adapted the design(*) many years ago already, however with the Stop2Go their watch now runs and stops like the original clock as well. 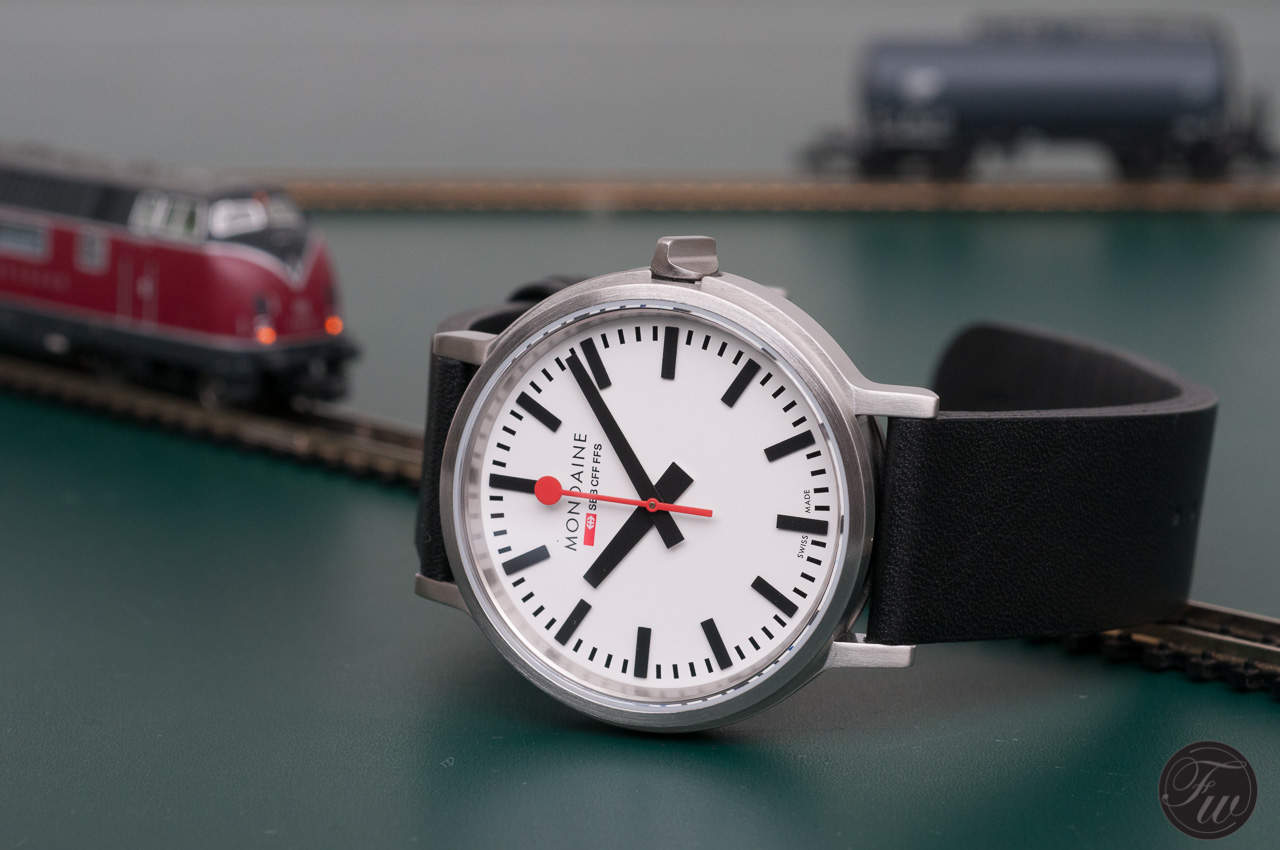 Although being a quartz controlled watch, the Mondaine Stop2Go watch’s second hand doesn’t tick to the second. It’s hard to count exactly, however I’d say the second hand ticks approximately 3 times per second. By this it looks to run much smoother, almost like a mechanical, or more like an electrical watch. 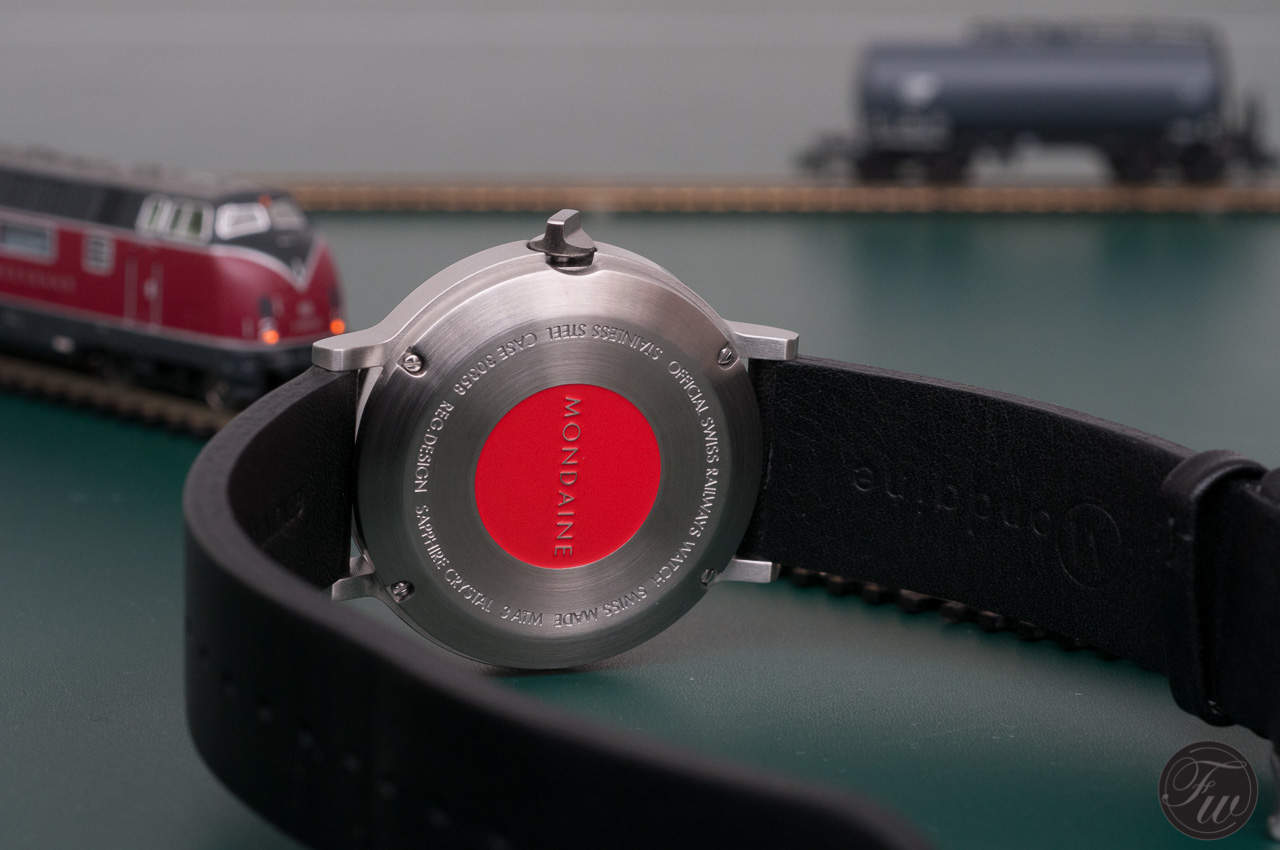 But here comes the trick. The second hand of an official Swiss railway station clock rotates the dial in 58 seconds in stead of 60. Exactly at 12 o’clock they take a rest. This rest enables the clocks on all Swiss railway stations simultaneously to be synchronized to the second, in fact to the minute, by a central master clock. 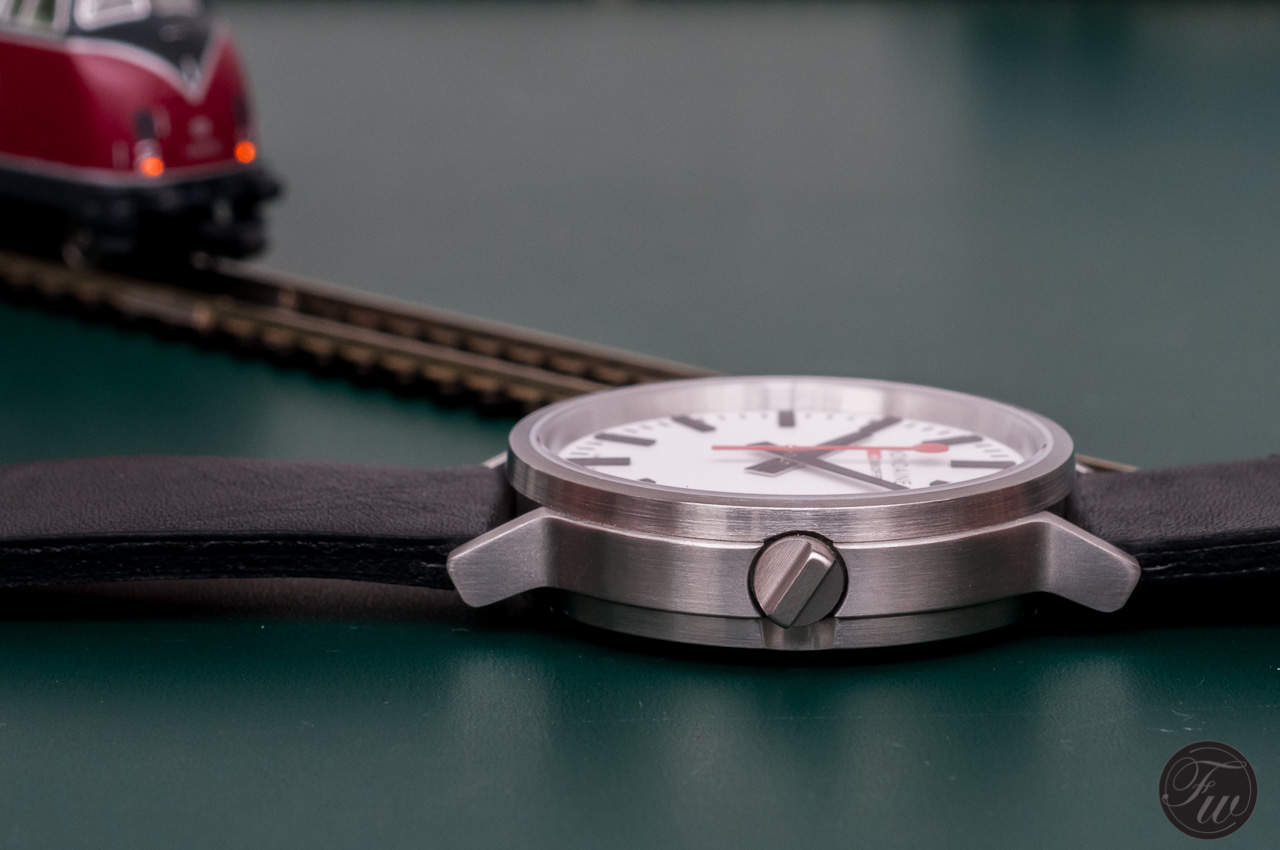 As mentioned the Mobach Swiss railway clocks are synchronized by a master clock at every full minute, the Mondaine Stop2Go watch isn’t. It’s controlled by its own very accurate quartz movement; in the few weeks I have worn the watch I couldn’t notice any deviation from the atomic time. 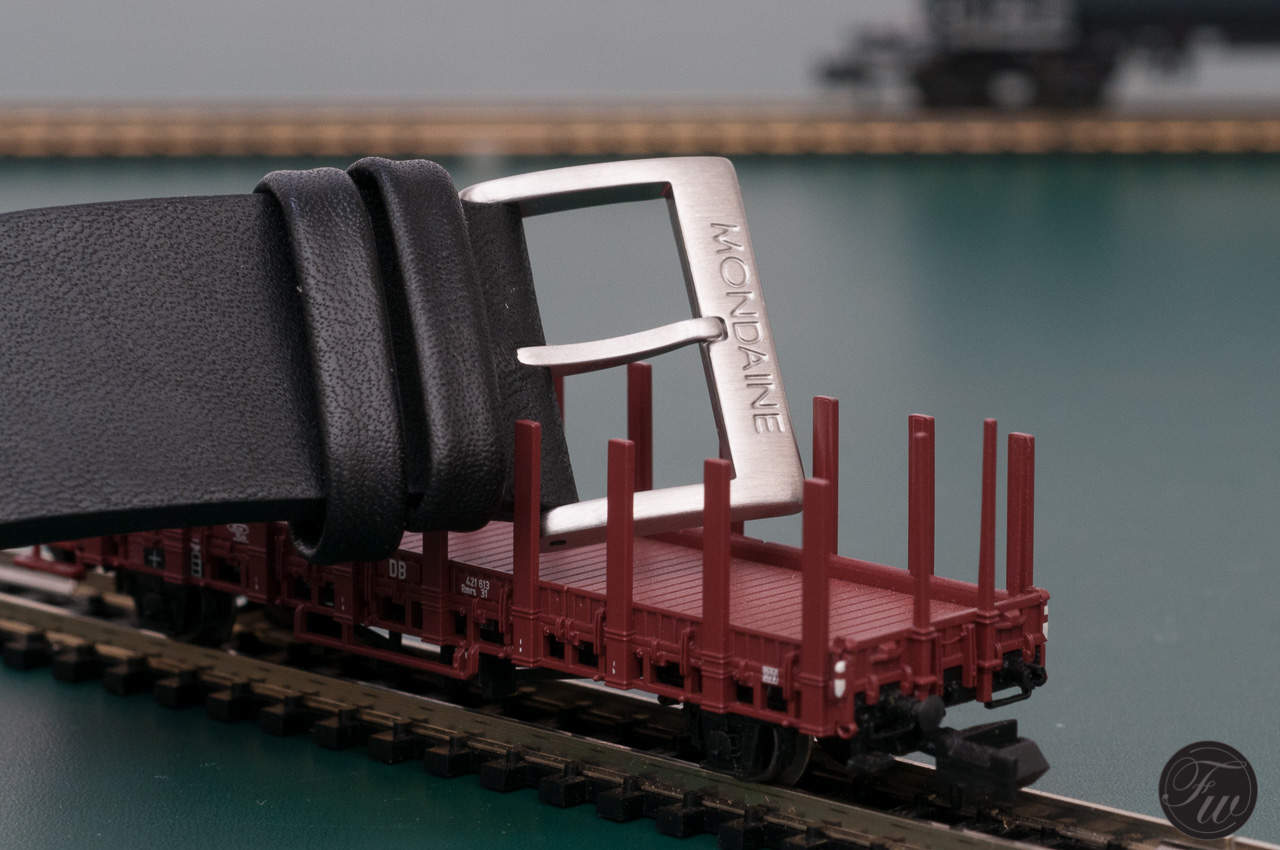 So what’s all the fuzz about? Just a slightly smoother running second hand which stops 2 seconds at every full minute? Yes, that’s just what it is. But it gives the watch exactly the touch which makes it so special and stand out from all other quartz watches. 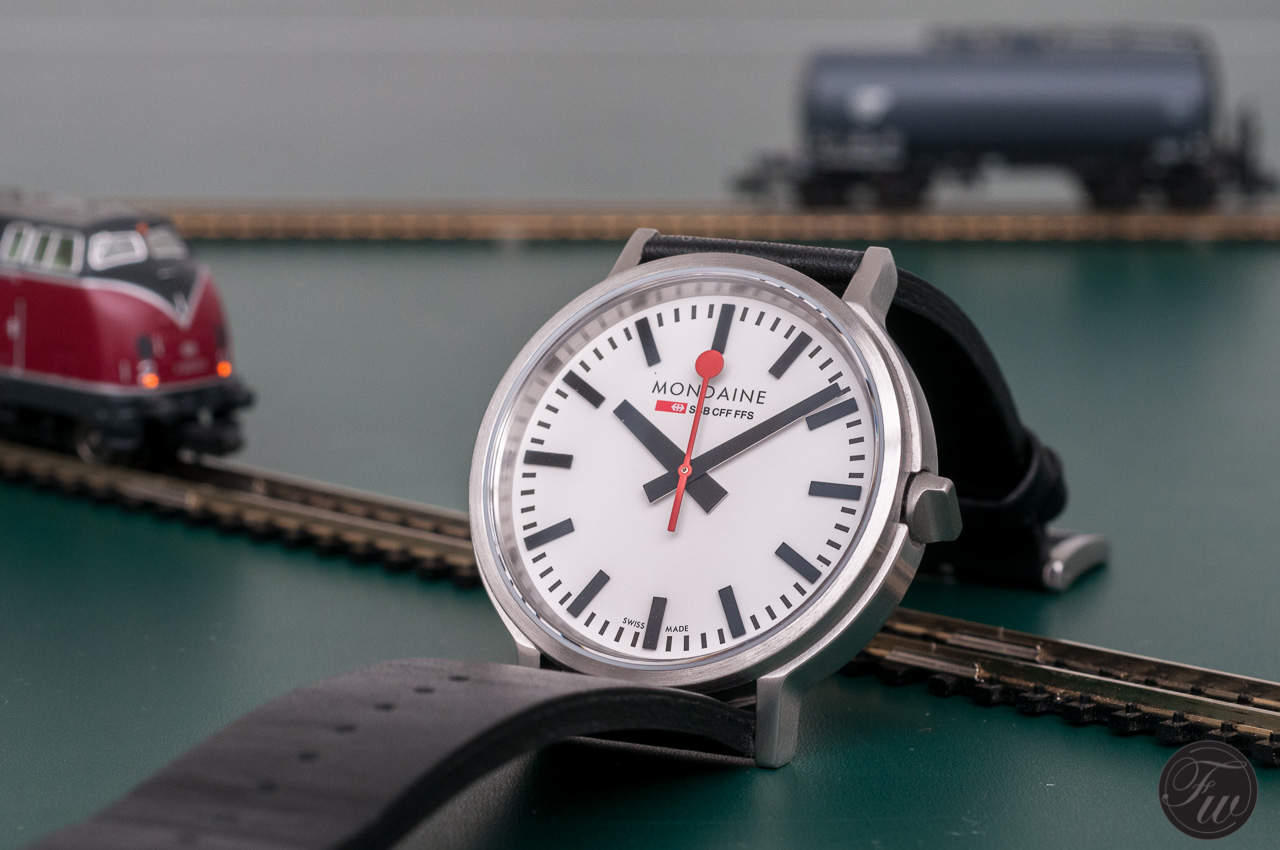 Additional to that, the casing of the Mondaine Stop2Go is quite a bit more robust than the regular Mondaine railway clock watches. It also sports an anti-reflective sapphire crystal and a screwed solid case back. A beautiful thick leather strap with a heavy buckle, being comfortable at the same time and suiting the 41 mm casing very well, tops it all off. 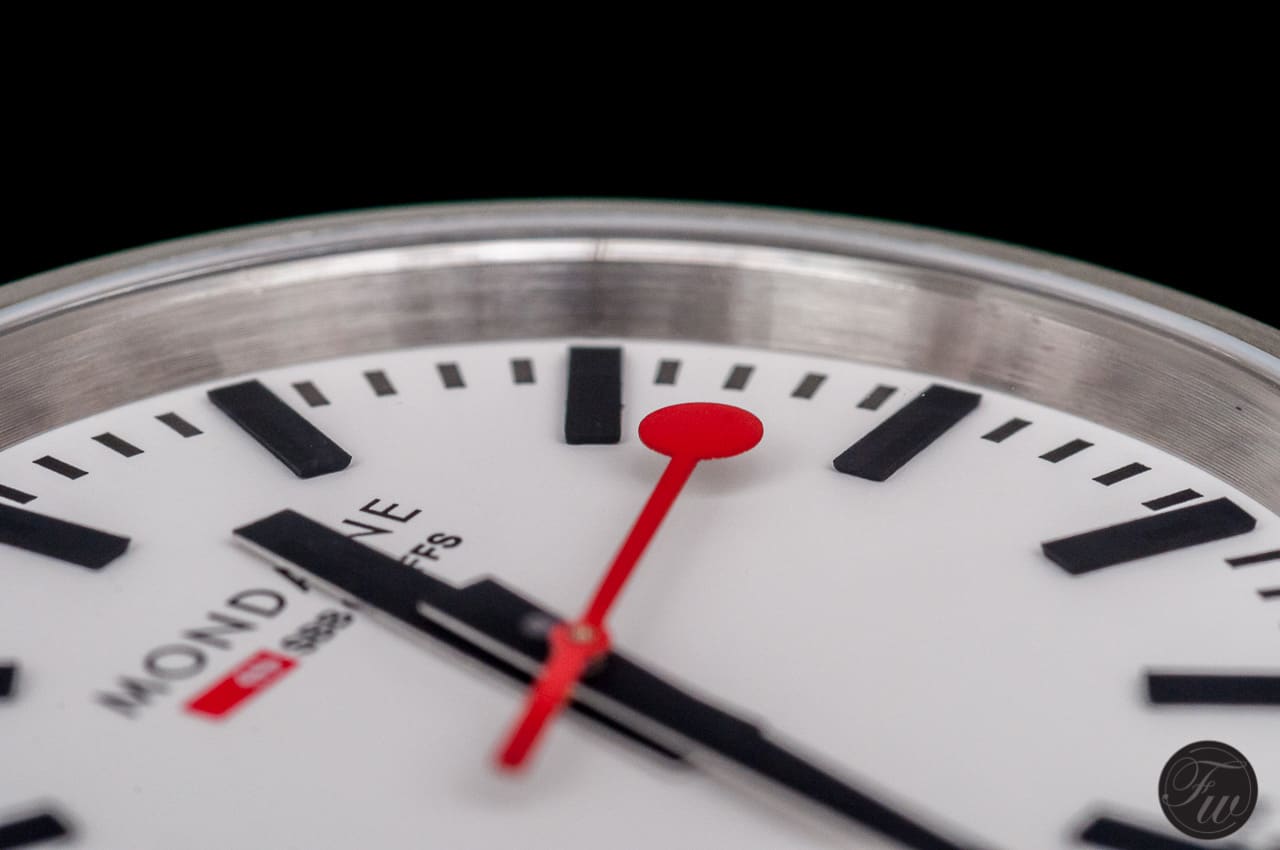 The dial has nice raised minute markers, something you won’t see on other Mondaine station clock watches as well. All in all this watch is just a league higher. When wearing it you feel to have a real watch on your wrist. 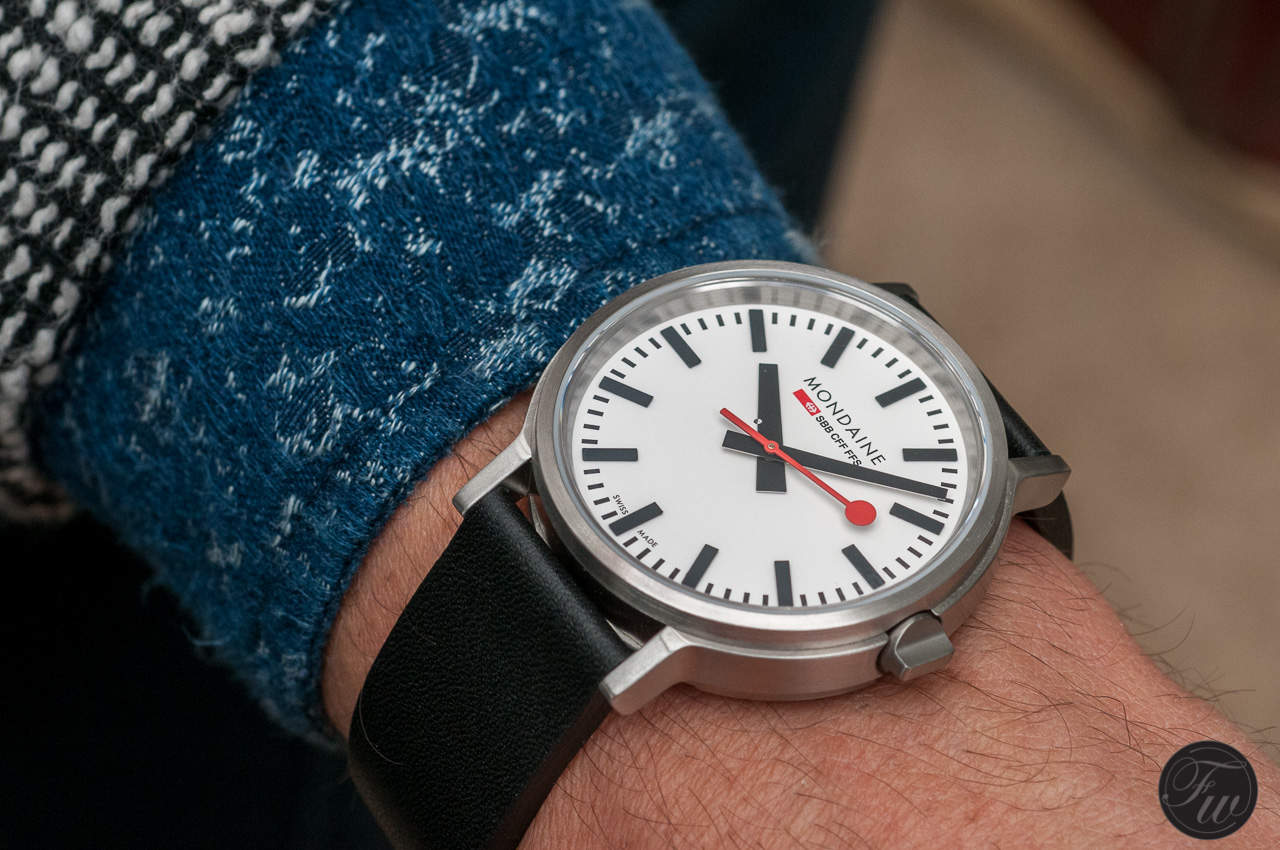 A last note should be made here about the crown, which effectively isn’t a crown. It operates more as a switch. When pulled out the second hand runs towards the 12 and stops. At that point the minute, and hour hand in relation, can be moved fore- or backward by turning the knob slightly to the left or to the right. Kept in a turned position the minute hand will first move per minute at a time, then faster per many minutes. When the knob is released the hands stop moving. Pushing the knob in makes the watch run again, starting exactly at the minute of course. 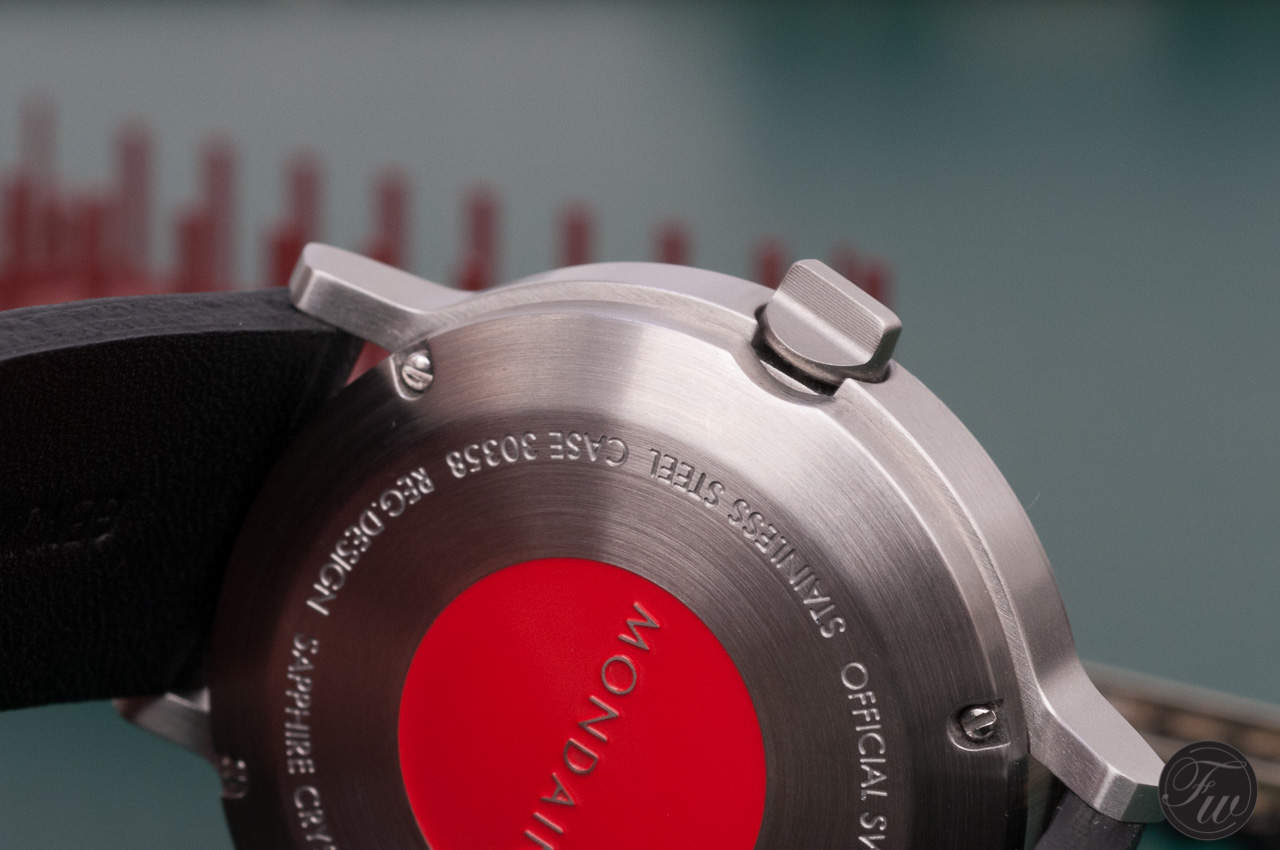 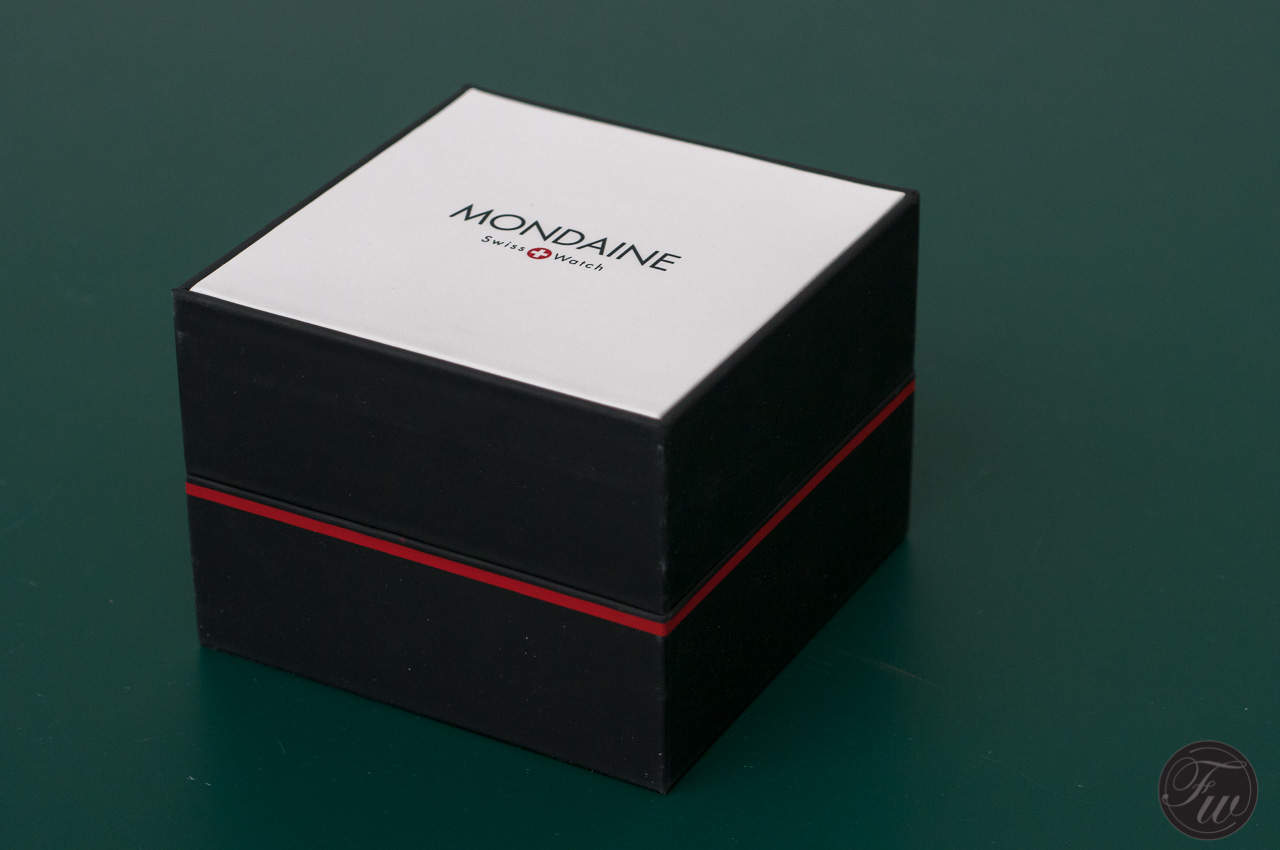 To get a good idea of the Mondaine Stop2Go functionality, you could have a look at a Mondaine video here.

(*) The Swiss railway clock was designed in 1944 by Hans Hilfiker, together with Mobatime, for use by the Swiss Federal Railways as a station clock. In 1953 Hilfiker added a red second hand in the shape of a railway guards signaling disc. [Wikipedia]