1858 refers to the founding year of Minerva, a watch company that was located in Villeret, Switzerland. A brand that struggled through its last years of existence, but also a brand with a lot of watchmaking history. If you put some effort into it, you will find – for example  – the most beautiful chronograph watches that were made by Minerva.

About 10 years ago, the Minerva brand was sold to Richemont Group, who also owns Montblanc. Montblanc, well-known for their writing instruments, was ready for the next step in horologie as well. Haute horlogerie, to be precise. What better way to have an awesome kickstart if you can depend on movements and watchmaking knowledge from a company like Minerva?

Montblanc has already been introducing ‘Minerva Villeret’ watches since a couple of years. At the beginning there was Minerva Villeret on the dial as well, but those names have been relocated to the movement only. The dial will just say ‘Montblanc’.

Inspired by the military chronographs that Minerva produced in the 1930s, Montblanc introduces this stunning 1858 Chronograph Tachymeter Champagne watch, limited to 100 pieces only.

As you can see, a beautiful large chronograph with mono-pusher movement. Large Arabic luminous numerals on the black dial and the typical Minerva logo at 12 o’clock. 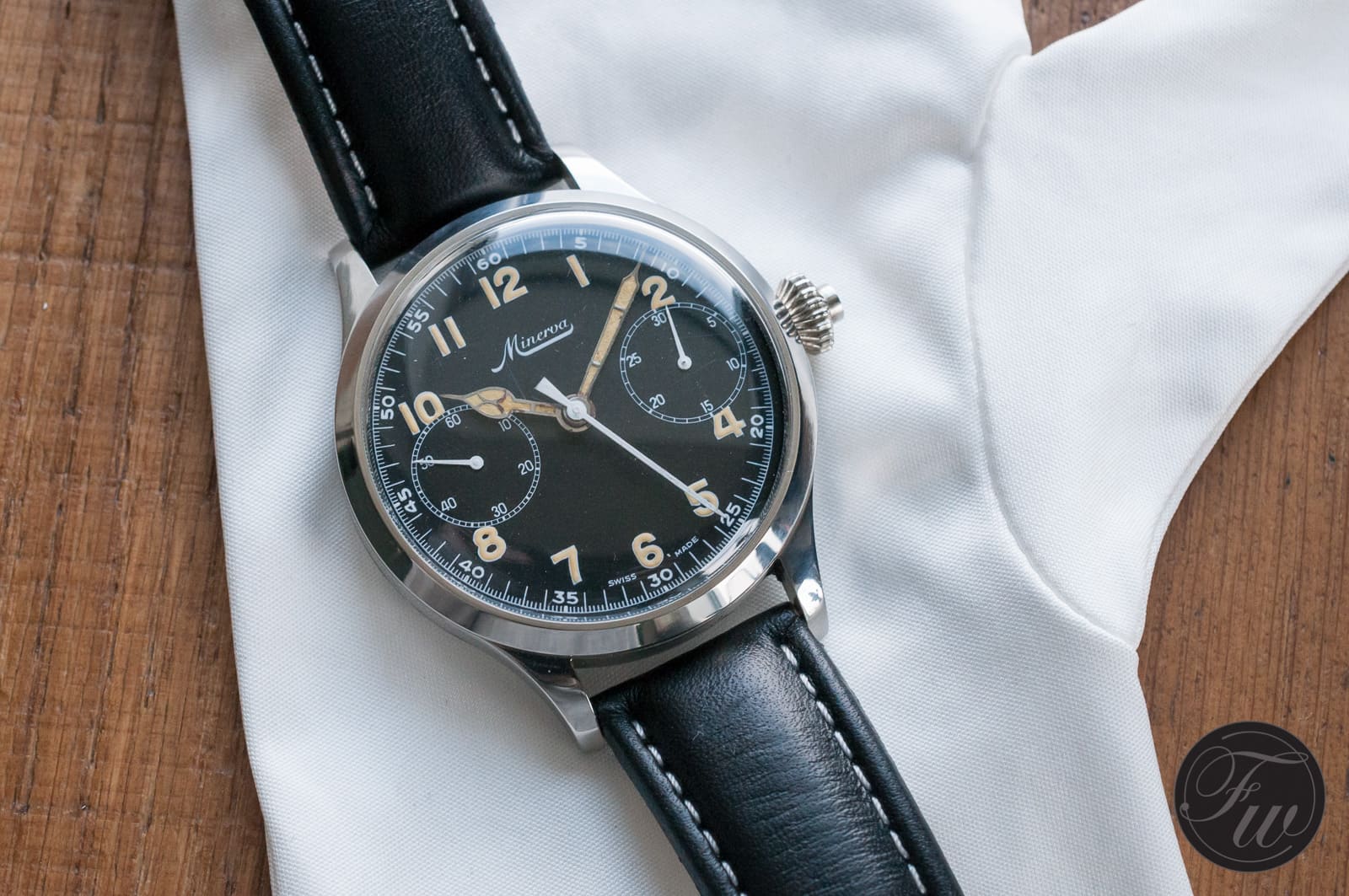 Inspired means not an exact copy, but with the respect of the original design codes of the Minerva. This means the large case, large cathedral hands with their cloisonné design, Arabic numerals, the design of the large crown and railway tracks around the smaller registers.

As written above, Montblanc does not and will not put Minerva on the dial of these watches, as this will work confusing (especially in some markets). Instead, they decided to use an older typography of the the Montblanc logo for the dial, including an emblem of the Mont Blanc mountain. Although historically the Montblanc logo might be correct (1930s), and it sure as hell does look good too, I am not sure whether it really makes sense to put an old Montblanc logo on a watch that never was a Montblanc, but a Minerva. Again, I admit that it does look neat, but it somehow also feels a bit weird to see a logo of the brand (when they made writing instruments only) on a vintage looking timepiece. But I am no marketeer, so what do I know. 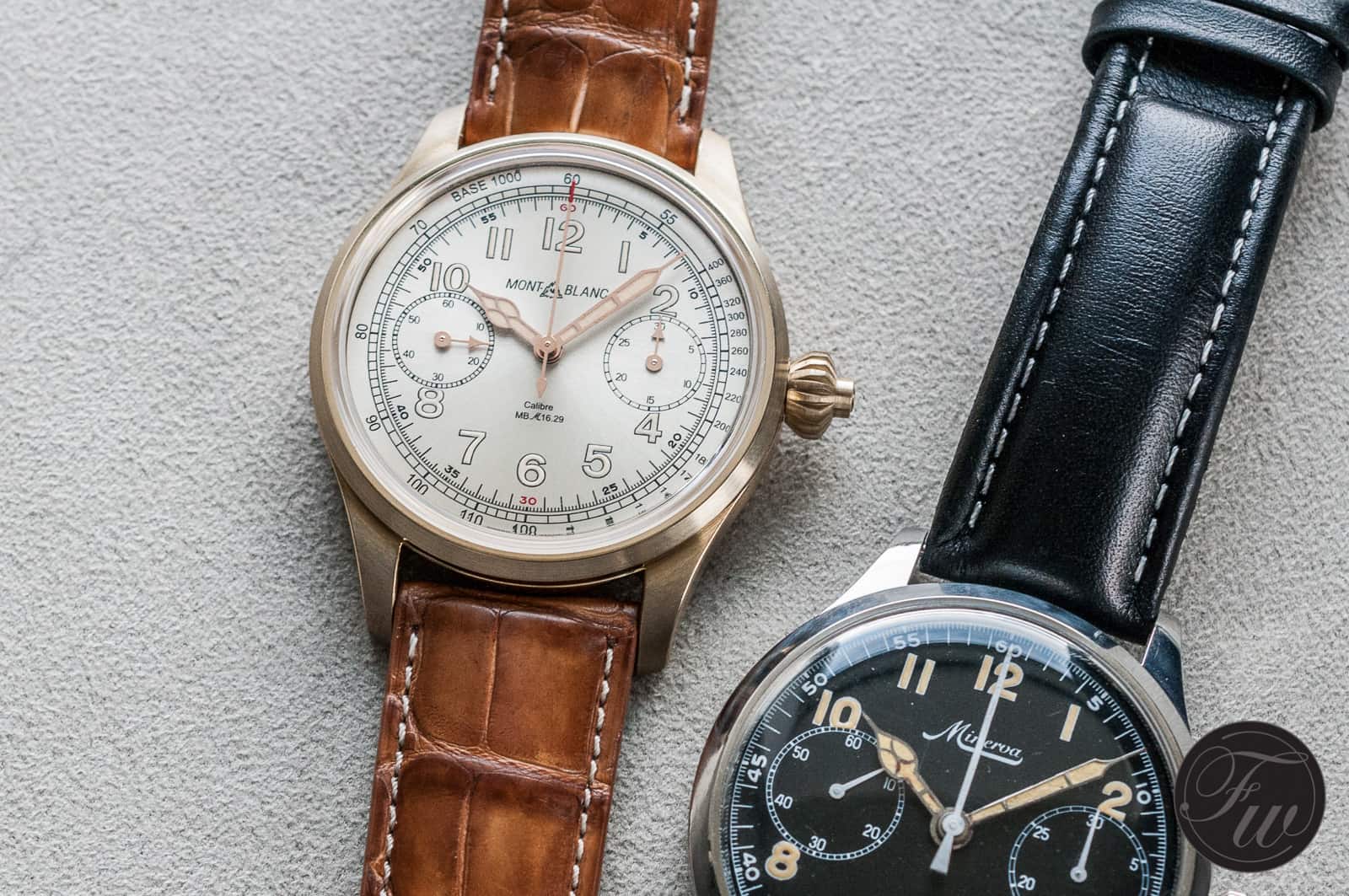 As you’ve noticed by now on the images, the Montblanc 1858 Chronograph has a bronze case. Something that does give the watch a vintage look & feel, and especially after a certain period of time it will create a beautiful patina.

This limited edition is housed in a 44mm bronze case with a matte finish. The bronze coloured case back is actually made of titanium, to avoid allergies. 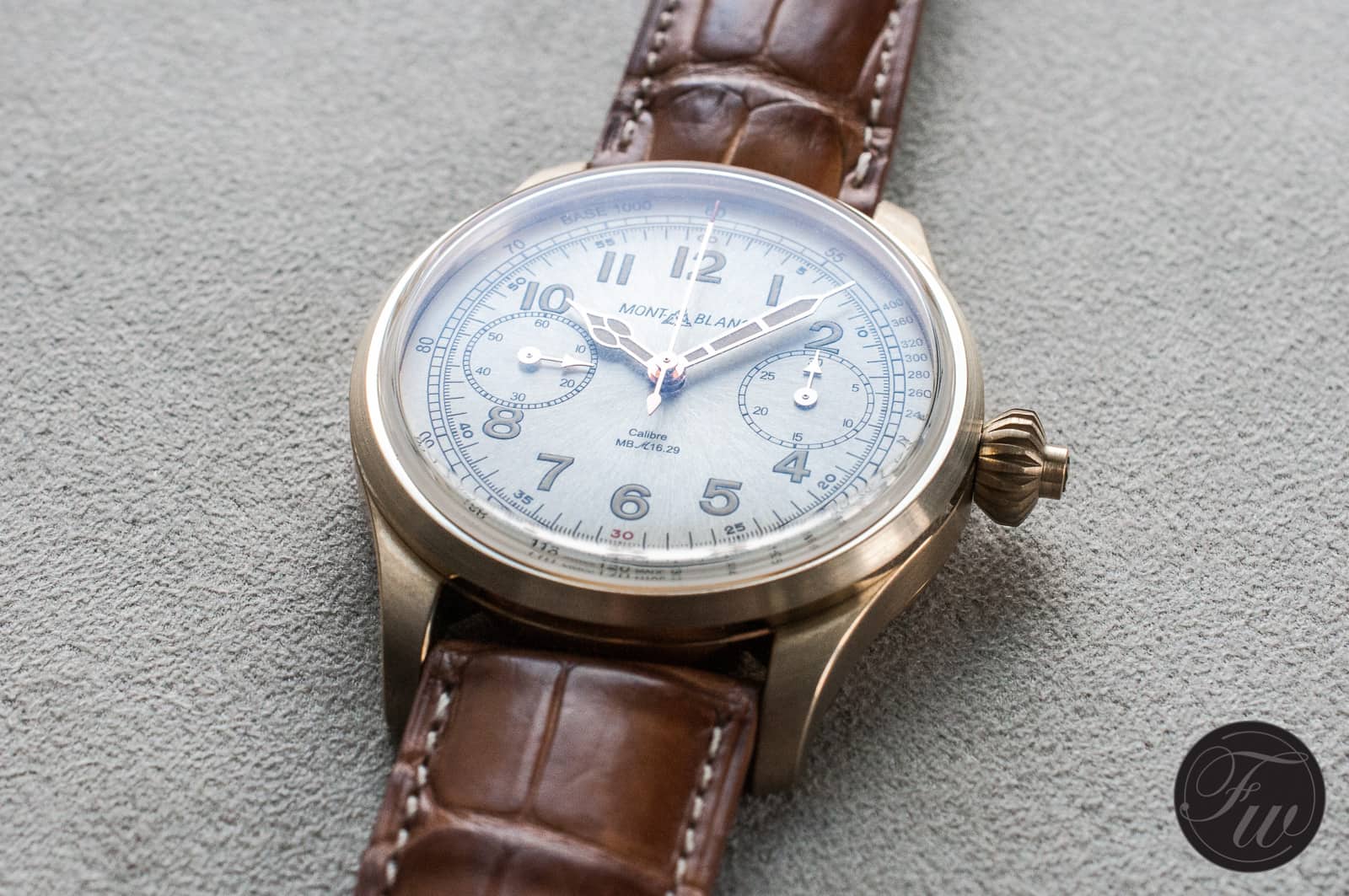 The Montblanc 1858 Chronograph houses a stunning mono-pusher movement, caliber MB M16.29. It has a column-wheel mechanism, chronograph bridge in a “V” shape, a large screwed balance wheel with a frequency of 18,000 vph and a power reserve of 50 hours. 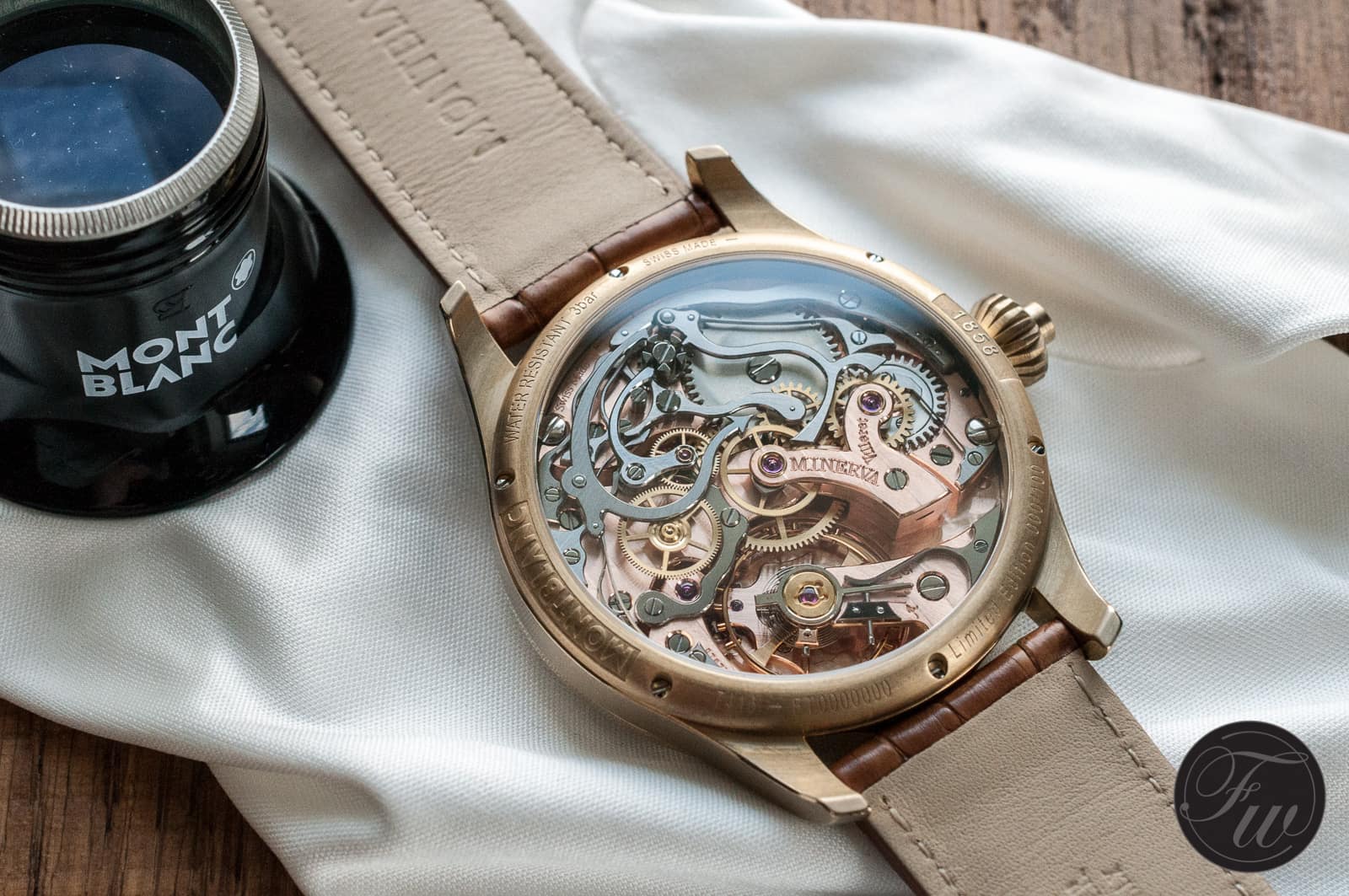 This movement is not only based on the original 1930s chronograph movement (caliber 17.29), it is also made entirely in-house in the Villeret manufacture. The movement has  almost the same shape of components, but with a different type of finish such as inside angles, Côtes de Genève stripes and circular graining.

As you can see, the copper colored parts of the movement match nicely with the bronze color of the case. In total, the movement consists of 252 components, of which 22 are jewels. The ‘copper’ color is actually a rose gold (4N) plating of the bridges and plate.

The Montblanc 1858 Chronograph will have a retail price of 27.500,- Euro and only 100 pieces will be made available. The Montblanc 1858 Chronograph isn’t the only piece that will become available in bronze in the collection, there will be two more pieces (1858 Automatic and 1858 UTC) that will have a more friendly price tag (starting at 3490 Euro).

Hot Topics
Theft And The Fear Of Watch Ownership: When Watch Collecting And Crime Both Increase
130 comments
Fratello Top Tip: A Cartier Watch Does Everything A Rolex Does
111 comments
Sunday Morning Showdown: Gold Chronographs Part Deux — Rolex Daytona Vs. Omega Speedmaster Moonshine Gold
81 comments
Hands-On: The New Omega CK 859 — A Manual-Wind Master Chronometer With 1930s Flair
79 comments
Weekend Contemplation: Why Is Everyone Always Wearing A Rolex Submariner? Or Any Diver’s Watch, For That Matter?
68 comments
Popular
Top 10 Rolex Watches – Overview of Models Favoured By Our Readers
Fratello
22
You Asked Us: Nomos Orion as a dress watch?
Gerard Nijenbrinks
7
You Asked Us: Rolex or Tudor
Gerard Nijenbrinks
8