If you’ve been paying attention since 2017, you might have noticed that Omega has been up to something. Every first (Speedy) Tuesday of the year, the brand has released either a new Speedmaster or something Speedmaster-related, like the caliber 321 re-introduction in 2019. This year, the 65th anniversary of the legendary chronograph brings us the Omega Speedmaster Calibre 321 in Canopus Gold, reference 311.50.39.30.01.001.

I am very proud and honored to be able to go hands-on with this new Speedmaster Calibre 321. It’s an incredible reproduction of the first Speedmaster CK2915, but in Omega’s own white gold alloy, Canopus Gold. As the name suggests, it features the beloved 321 chronograph movement. Back in 2017, Omega released the Speedmaster ’57 60th-anniversary piece. It was available both separately and as part of the Trilogy set, consisting of the Speedmaster, Seamaster 300, and Railmaster. Those watches were in steel, and in the case of the Speedmaster, powered by the then-common 1861 movement. 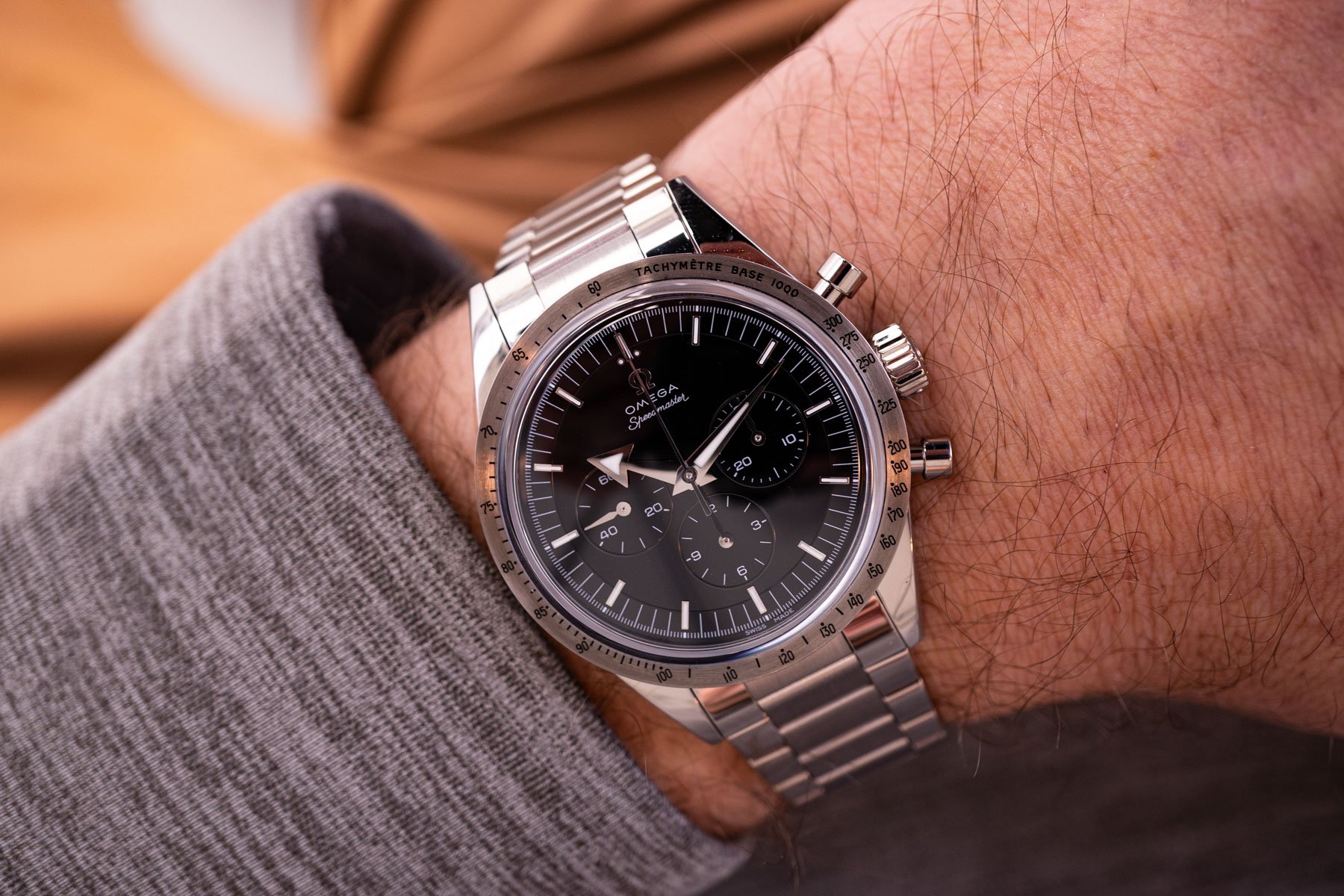 The re-introduction of Omega’s caliber 321 came only in 2019 in the form of the platinum Speedmaster Professional. The re-edition of the 105.003 followed in 2020. Although the Speedmaster from 2017 with its Broad Arrow hands was an incredibly nice reproduction of the first Speedmaster, there are some differences with this new Speedmaster Calibre 321 in Canopus Gold, of course. 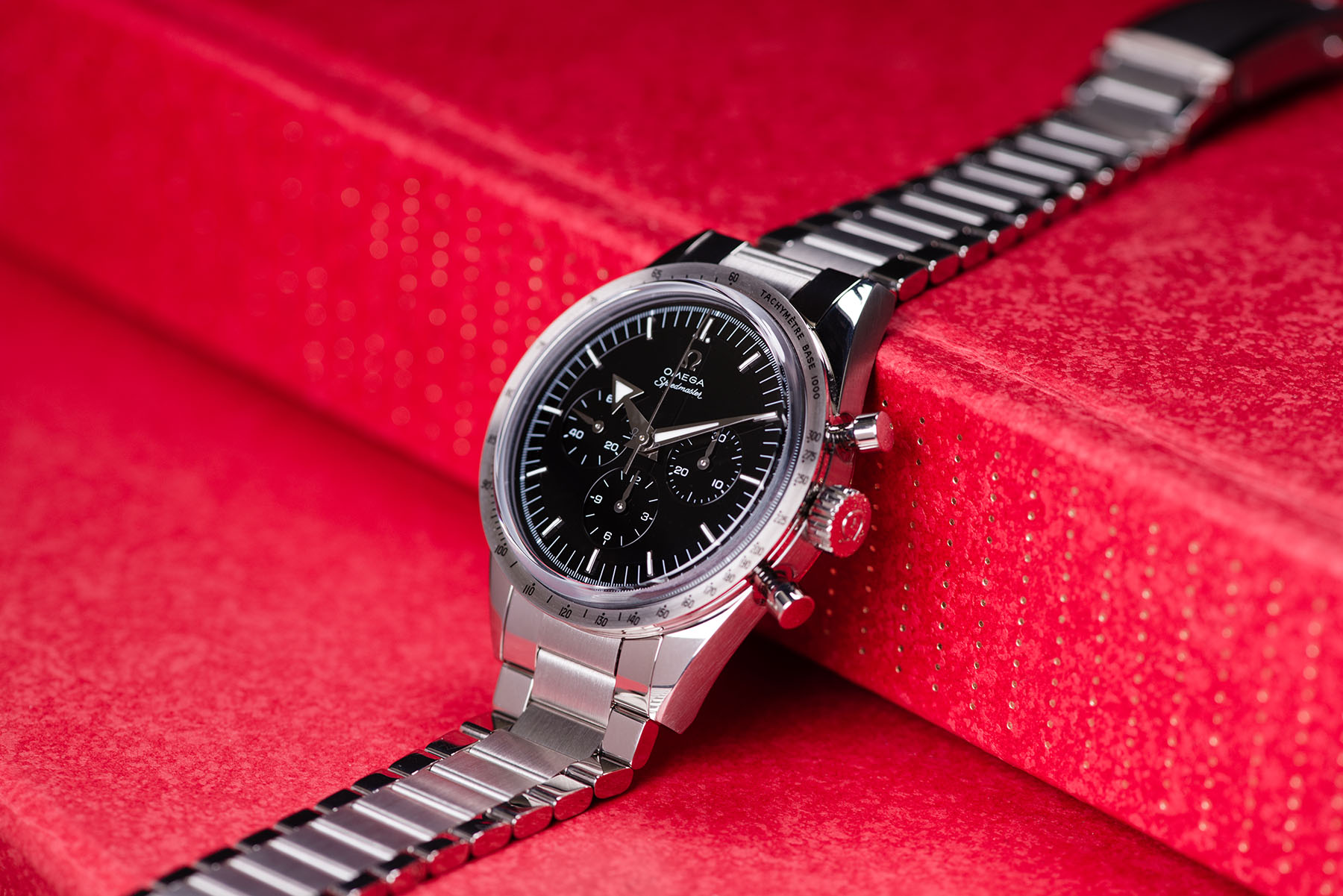 This new Speedmaster Calibre 321 in Canopus Gold shares the exact same dimensions as the original CK2915. It has a diameter of 38.6mm, a lug-to-lug length of 48mm, and a thickness of 13.92mm. The Omega Speedmaster Calibre 321 Canopus Gold has a sapphire crystal, instead of the Hesalite that was used on the original model. Nevertheless, the thickness is exactly the same. 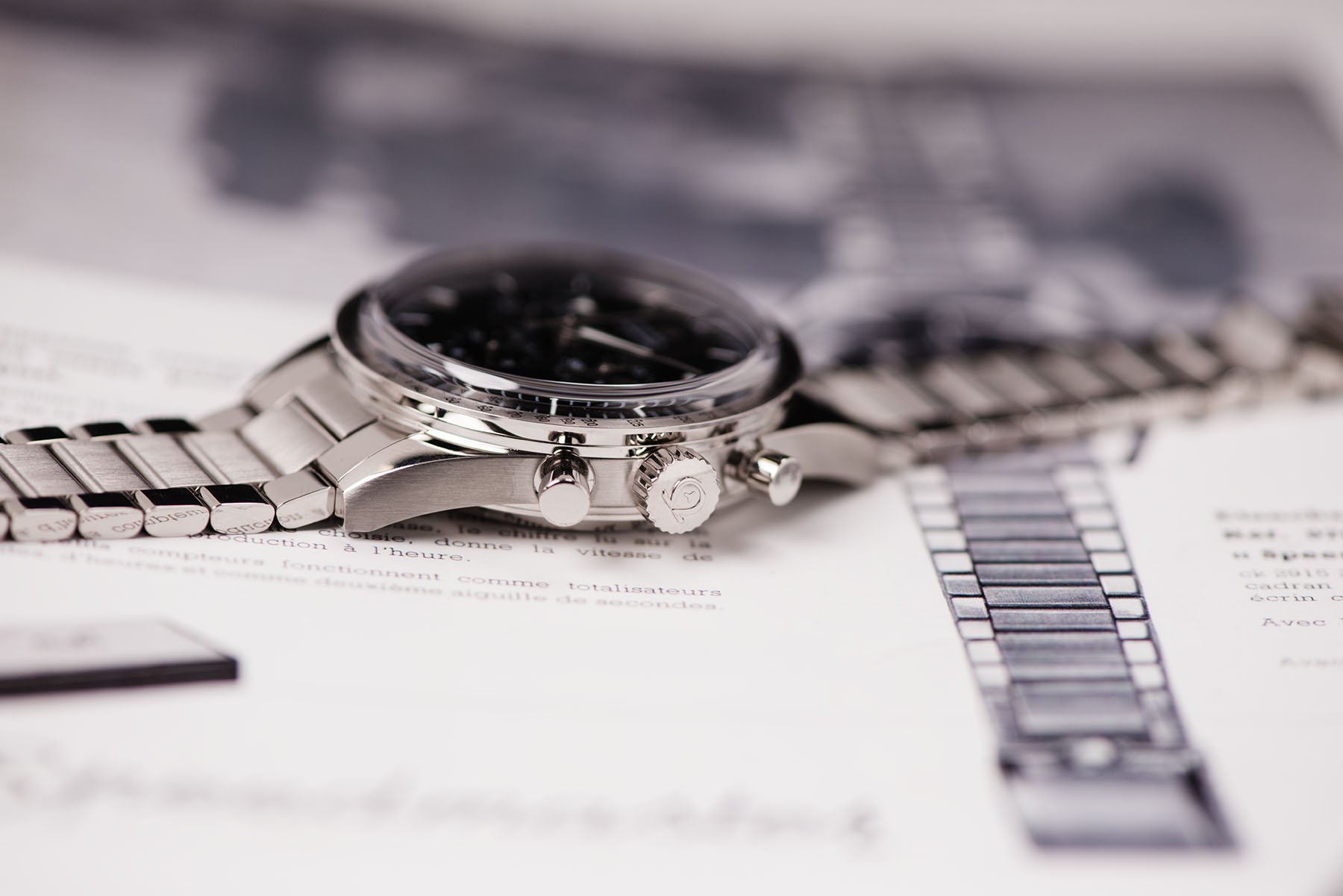 The crown has the NAIAD logo inside the Omega logo

You could say that the middle case is similar to the one on the steel Calibre 321, as it was in the past. The first three generations of the Speedmaster had identical middle cases, while the bezel basically determined the diameter. The CK2915 has a 38.6mm diameter, while the 105.003 has a 39.7mm diameter, merely due to the bezel itself.

Did you know: The first Speedmaster CK2915 was delivered on September 23rd, 1957 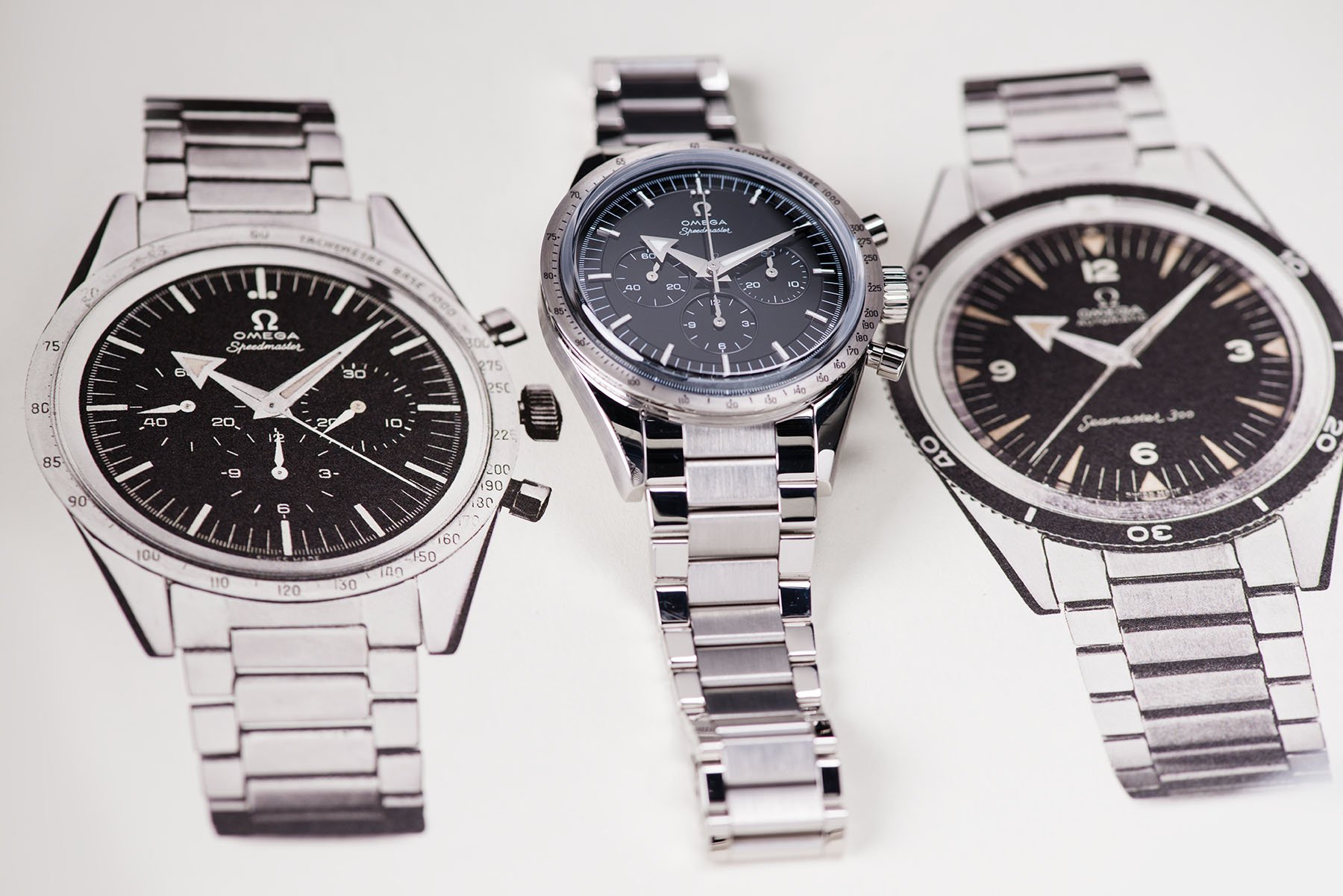 The bracelet on this new Speedmaster is of course also made of Canopus white gold, and it is nearly identical to the one on the stainless steel Speedmaster Calibre 321. It tapers from 19mm between the lugs to 15mm at the clasp and is 2.6mm thick. Aside from the material, the difference in this bracelet is the easy-extension system inside the clasp. Omega refers to this as the “comfort release” adjustment system. 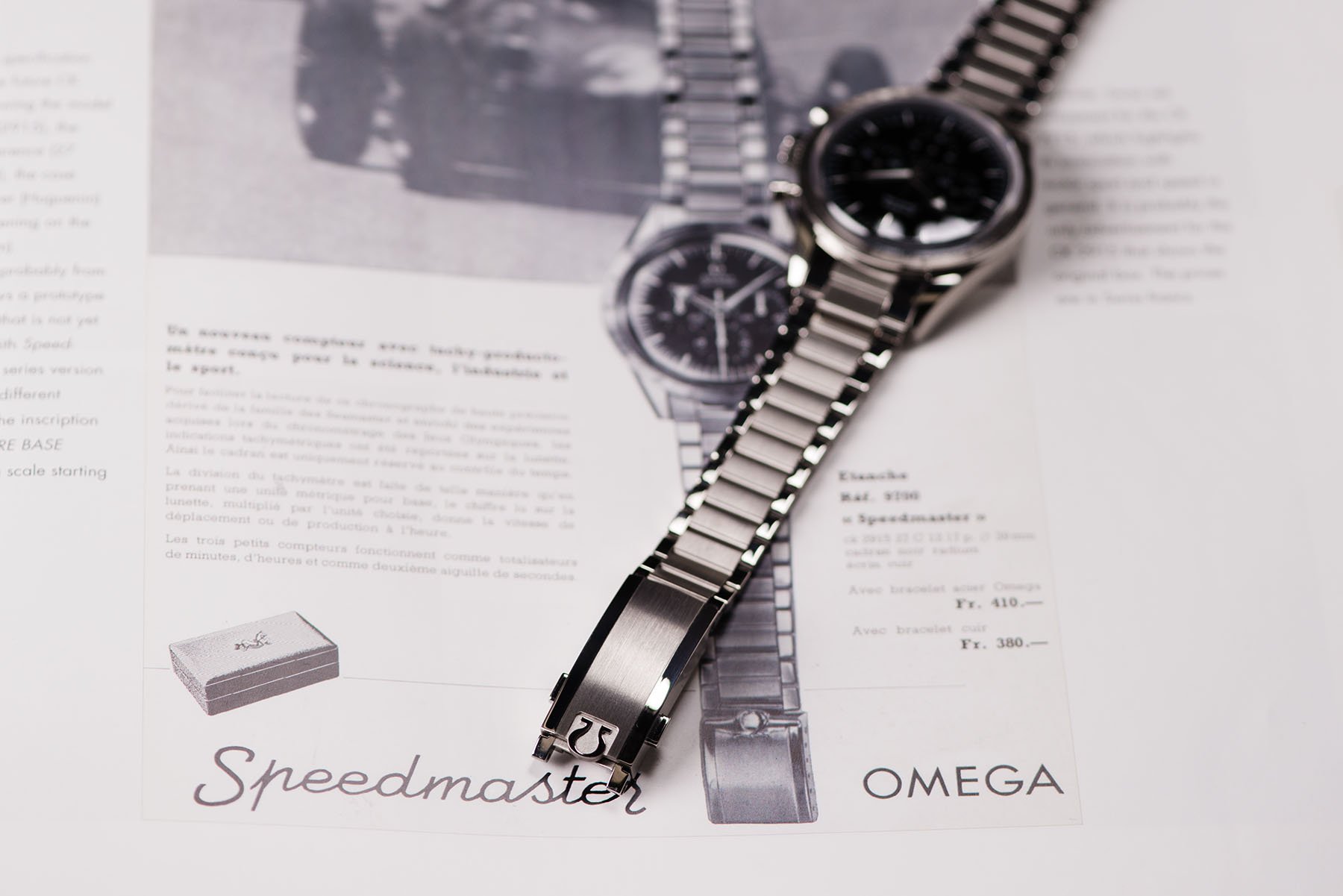 With it, you can extend the bracelet by 2.3mm, which is especially convenient on hot summer days. Even without this extension system, this bracelet is extremely comfortable, and it looks as amazing as it feels on the wrist. The white gold does add some heft to it, which I like. In the picture above, you can see how similar the bracelet looks to the original one. 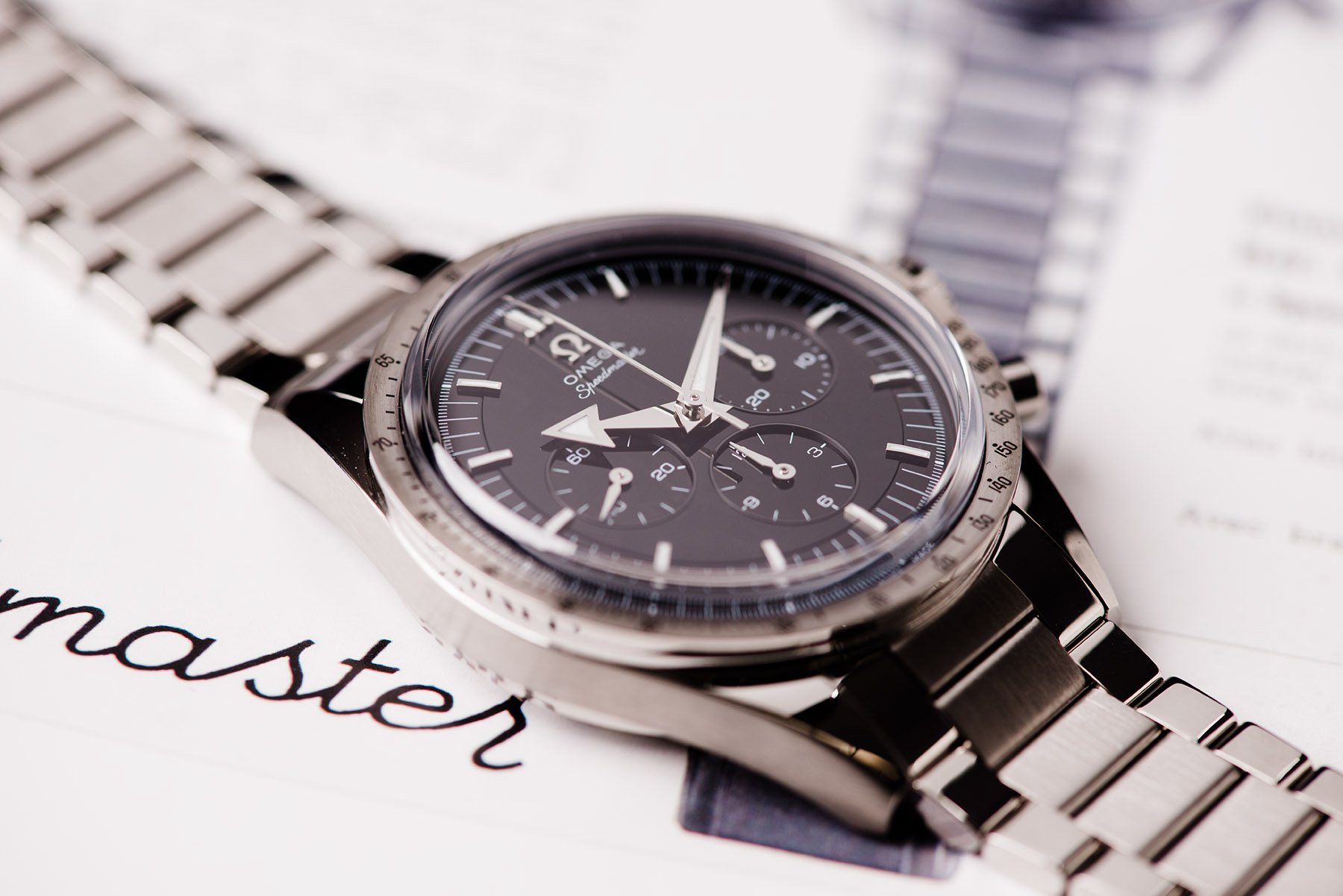 The dial of the Speedmaster Calibre 321 Canopus Gold reference 311.50.39.30.01.001 is something truly special. It is a modern interpretation of the original CK2915 dial, including the 0.05mm step. For this special version of the Speedmaster, the dial is made of black onyx and consists of multiple layers. There is one base plate made of black-coated brass, three subdials made of onyx, and an onyx layer with three cutouts for the subdials on top. There is also a black onyx outer ring for the minutes and chronograph seconds track. 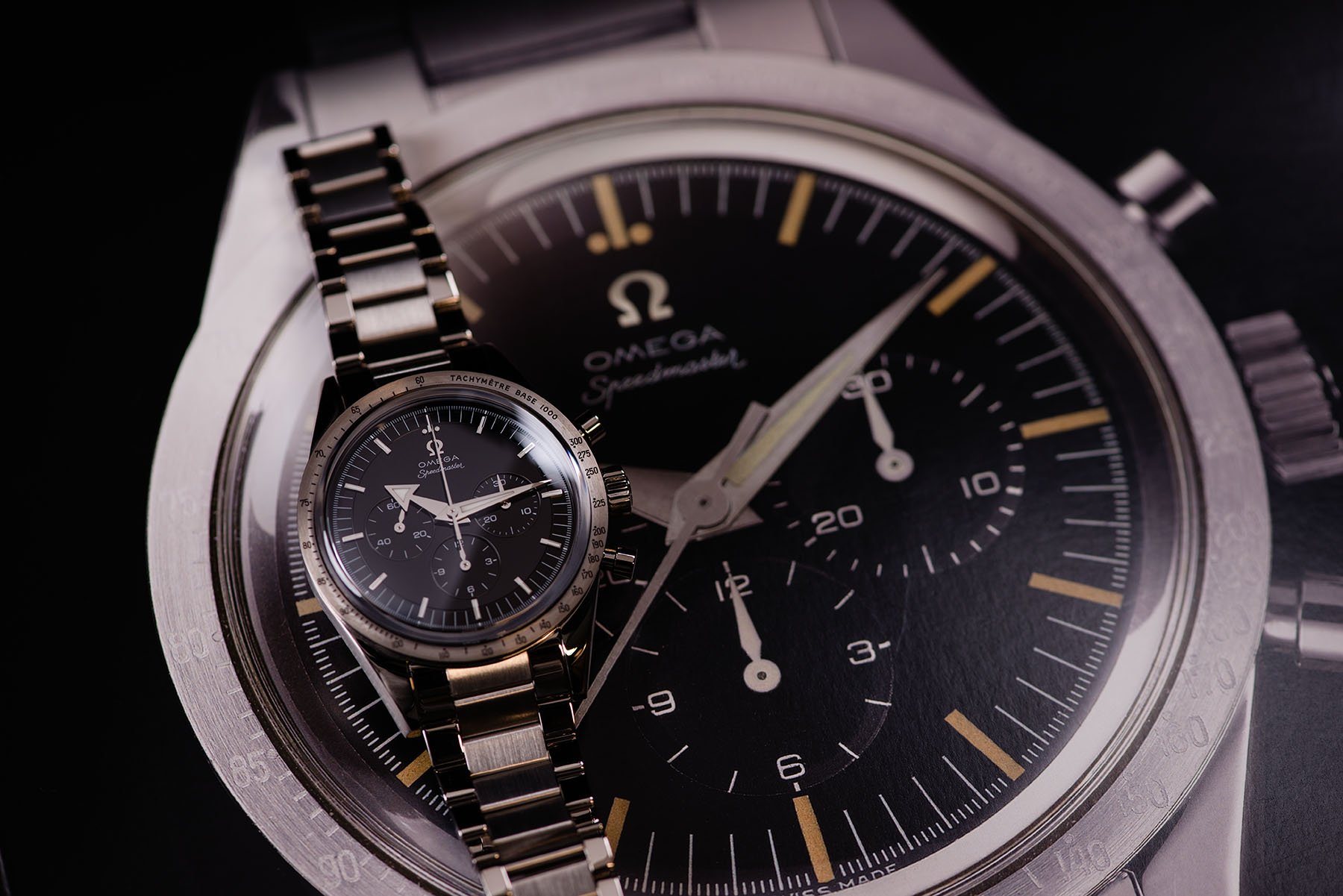 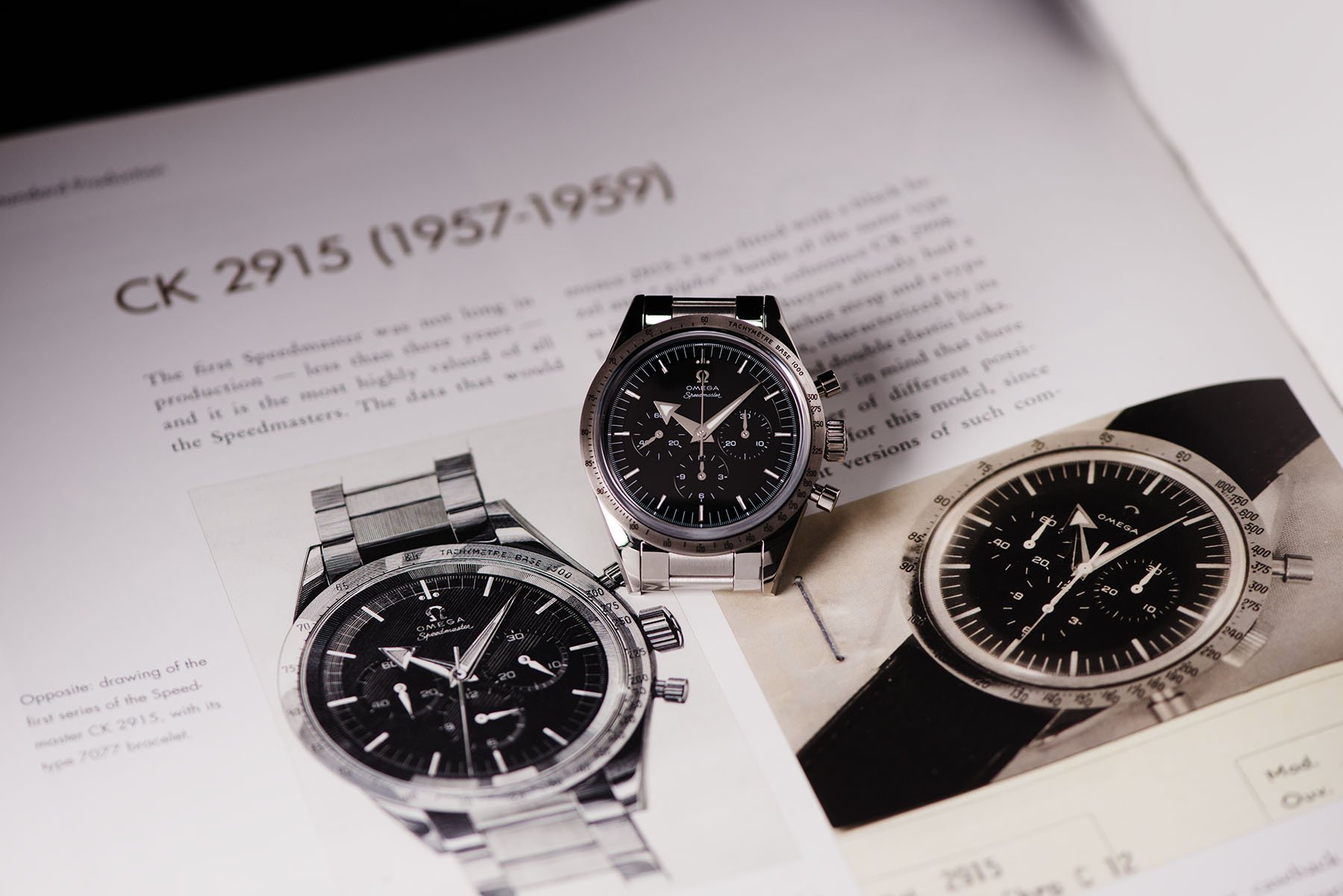 Single-AR coating for a reason

Because Canopus Gold is a different alloy than standard white gold, it is more difficult to polish on very small components. Because of this, Omega used a regular 18K alloy to make all of the white gold elements on the dial. Omega then polished and finished them to perfection, and applied a Canopus Gold PVD treatment to match the color of the case. This is also true for the hands, of course. The watch features a sapphire crystal on the front, which has the Omega logo laser engraved on the inside. Gregory Kissling, Head of Product Management at Omega, told us that the sapphire crystal is treated with an anti-reflective coating on the underside only. A double-AR coating would make the watch look too modern, too perfect. 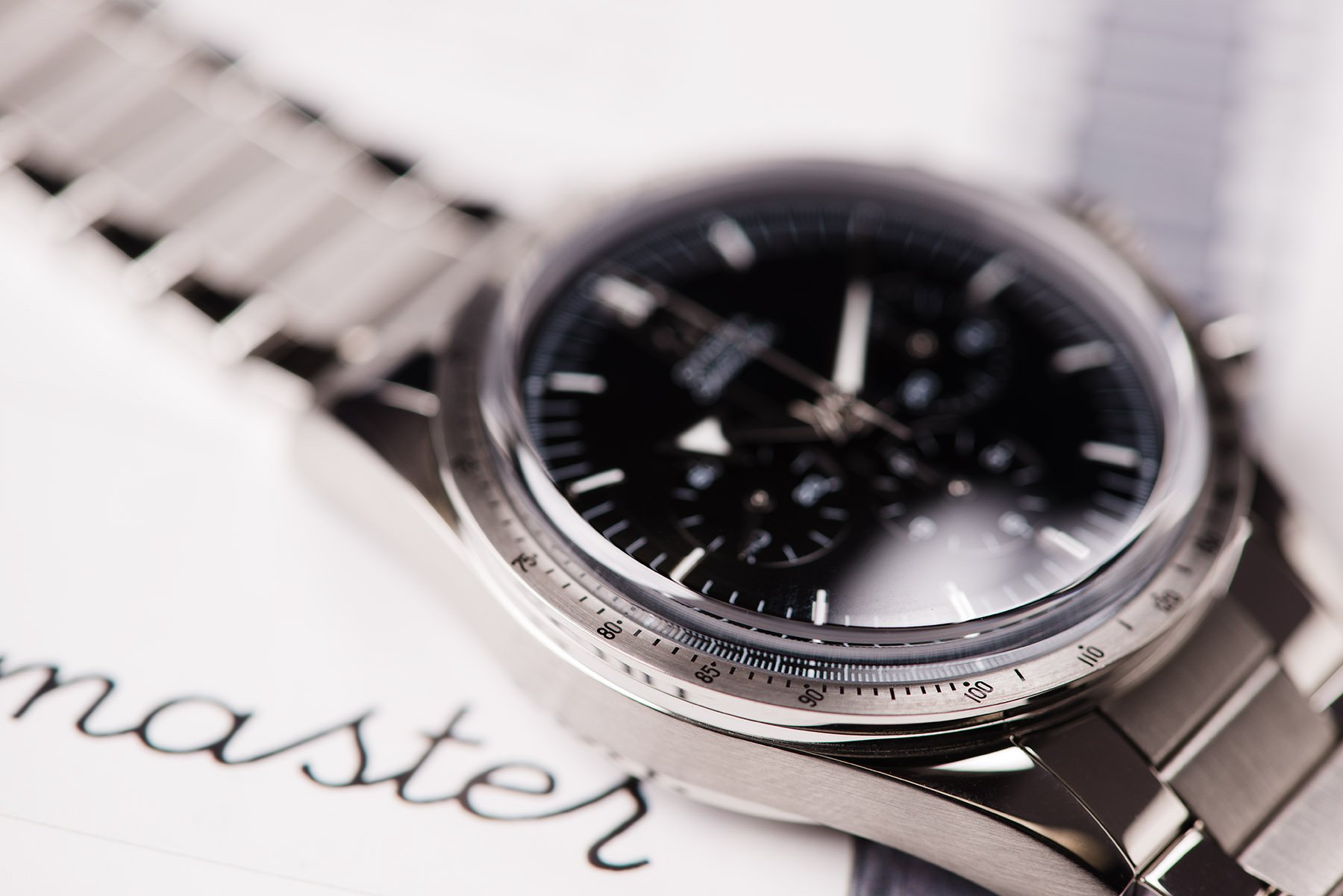 Canopus Gold consists of 75% gold but also contains 20% palladium and two smaller portions of rhodium and platinum. This ensures that the white gold case and bracelet will stay white, and won’t start to get a yellow-ish hue as the years go by. It’s Omega’s proprietary white gold alloy, and it was used for the Omega Speedmaster Professional Moonwatch Canopus Gold with caliber 3861 in 2021. Just like the case of this new Calibre 321, the bezel itself is also Canopus Gold. This tachymeter bezel is a literal work of art, made by the artisans at Omega. Instead of going the easy way and using black lacquer, Omega decided to use Grand Feu enameling for the tachymeter scale. 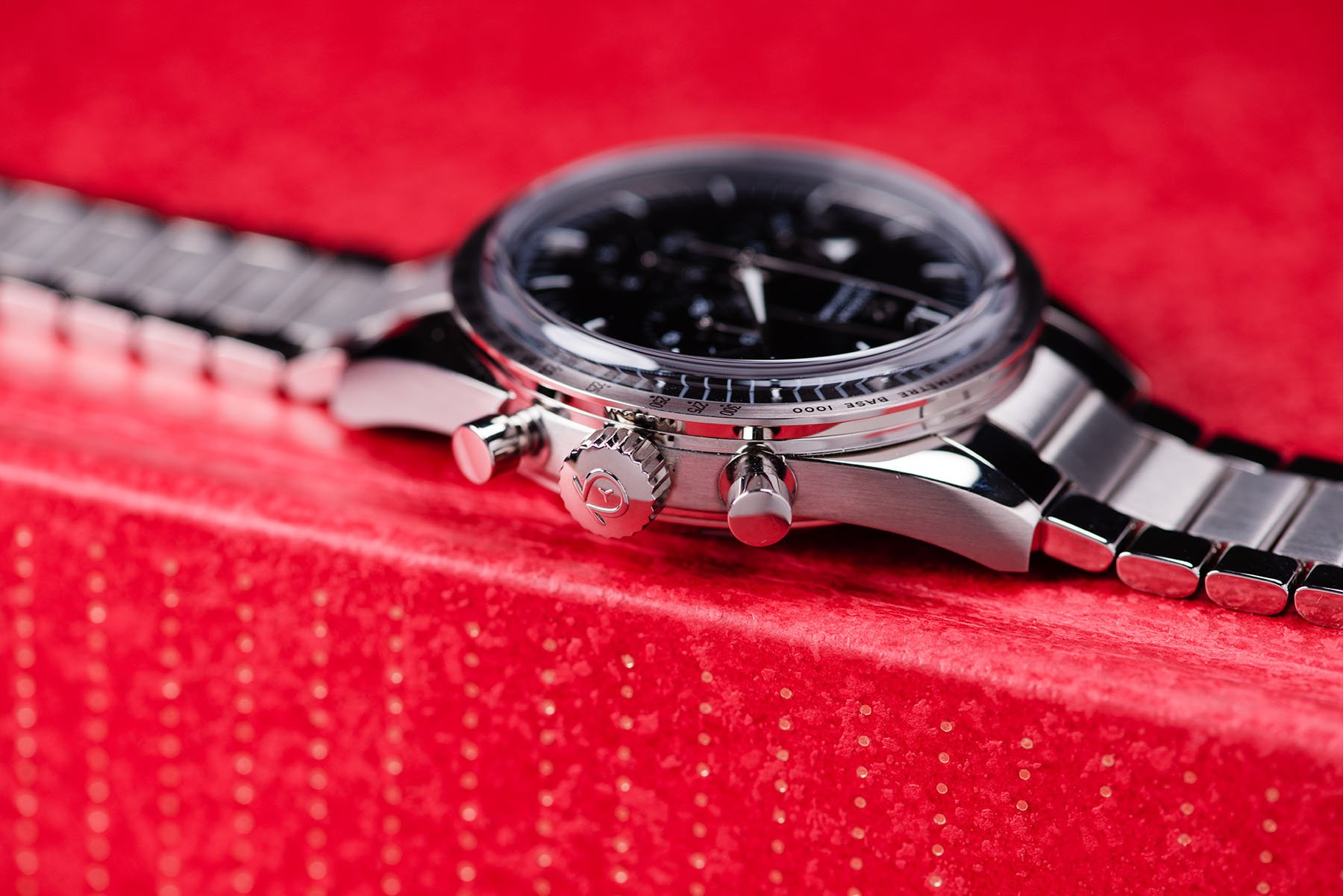 To do so requires three layers of enamel fired at 850 degrees Celsius. Then, in order to get the glossy finish, it goes back into the oven at 800 degrees Celsius. You can compare the process a bit with the enameling of the case back of the Speedmaster Silver Snoopy Award. In total, the Omega Speedmaster Calibre 321 in Canopus Gold weighs no less than 226.5 grams on a full-length bracelet. 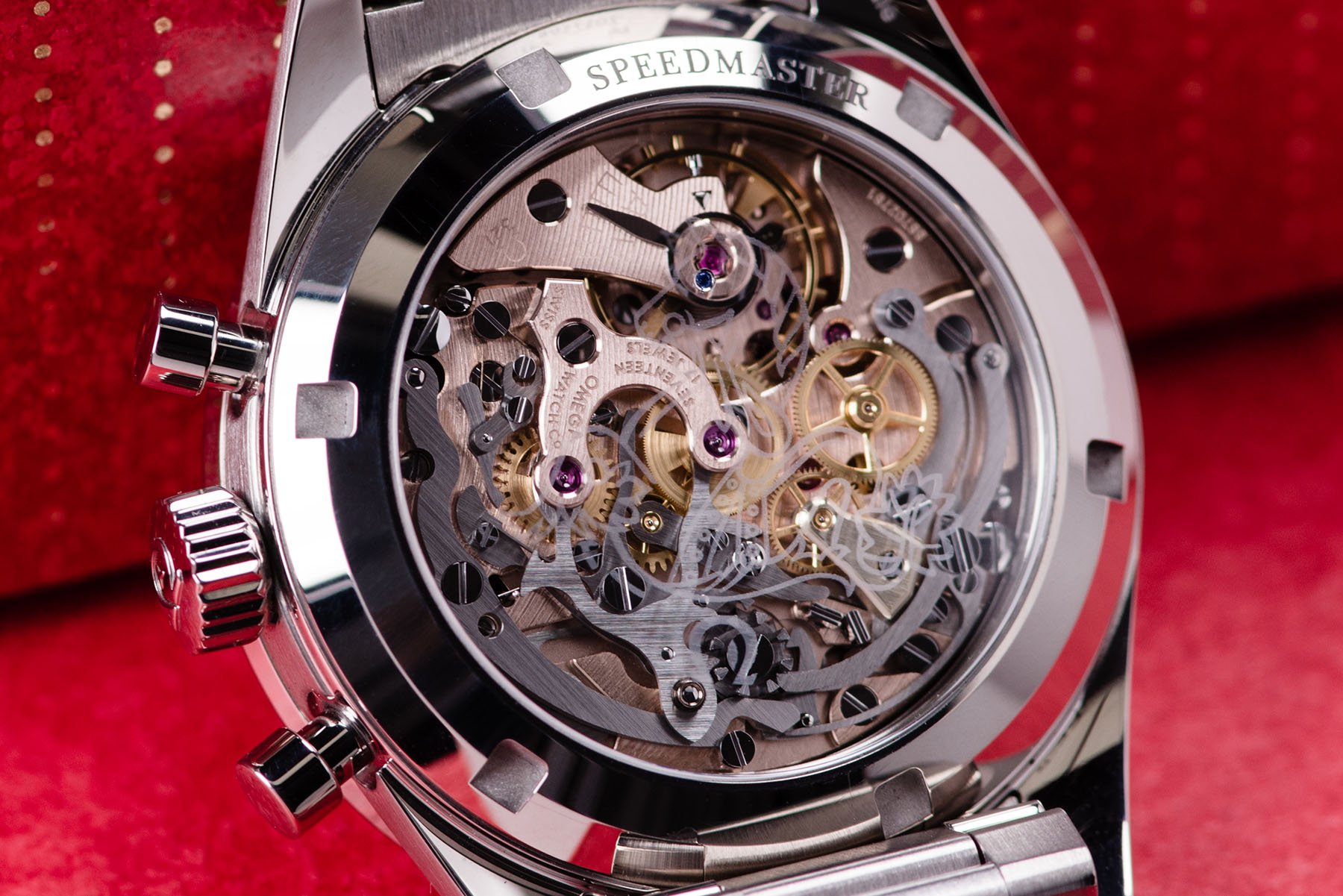 Hippocampus with a blue sapphire eye

On the case back is where we’ll find a true gem. The double-bevel case back has a sapphire crystal, so you can admire the caliber 321 in all its glory. On that sapphire crystal, you will find a laser-engraved image of the mythological sea monster, the hippocampus. The eye of the hippocampus, however, is a blue sapphire stone set into the crystal itself. Blue sapphire refers to the 65th anniversary, of course. Omega used Liquidmetal technology for setting the blue sapphire inside the sapphire crystal. First, Omega engraves a cavity in the crystal with lasers, then presses a heated amorphous piece of platinum into it. The blue sapphire stone is then placed within it. This type of closed setting is patented by Omega. 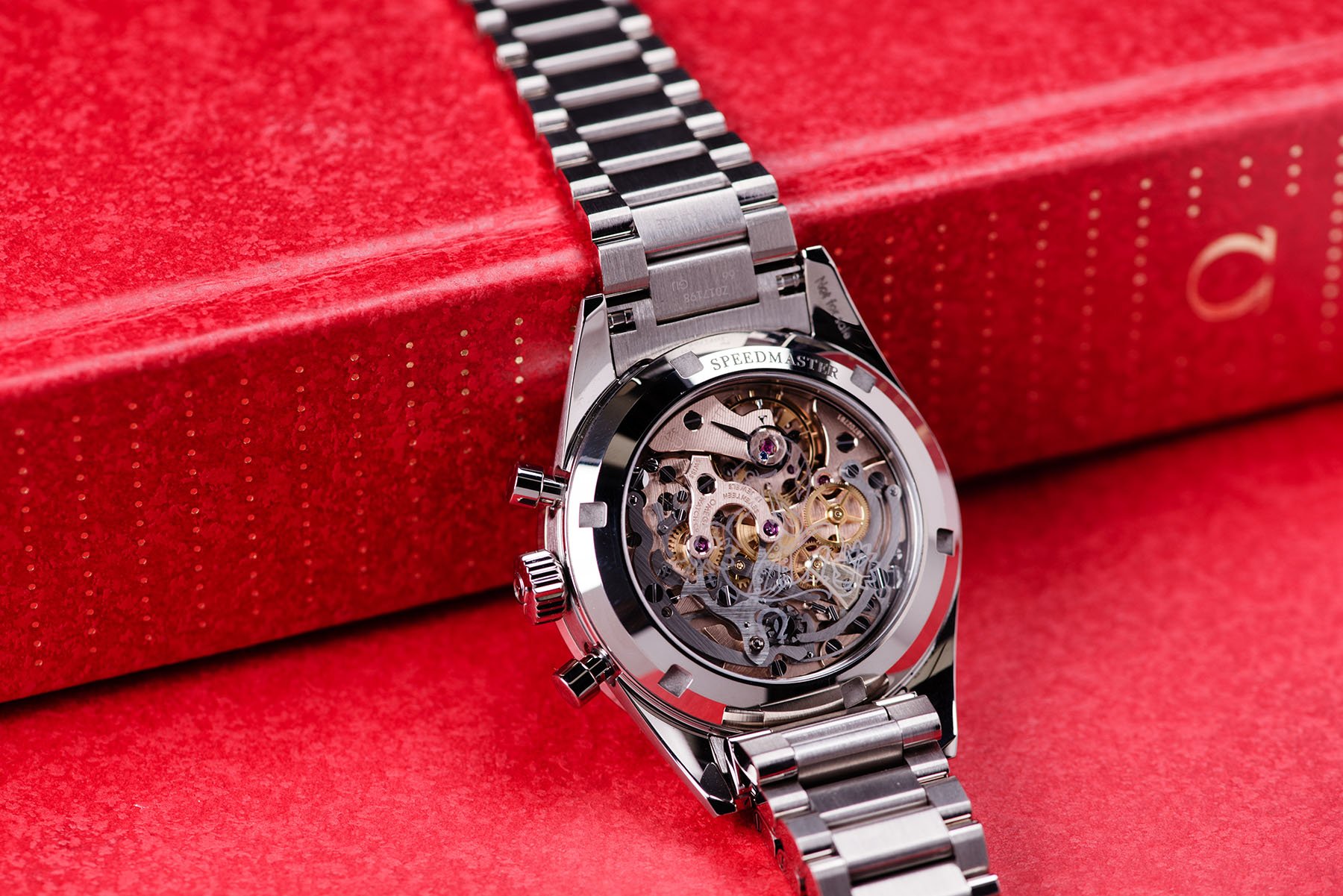 Under the case back you will find the caliber 321, a legendary column-wheel chronograph movement. It is the same movement found in the Speedmaster Professional Moonwatch in platinum and the Speedmaster Calibre 321 in steel. It is based on the second generation of this caliber, found in the 105.003, 105.012, and 145.012 references. These were the only Speedmaster references, and thus the only movement, used on the Moon in the 1960s and early 1970s. At first, I wondered why Omega didn’t use Canopus plating for the movement instead of Sedna Gold. My second thought, however, was that the Sedna Gold plating gives a very nice contrast to the white gold case. 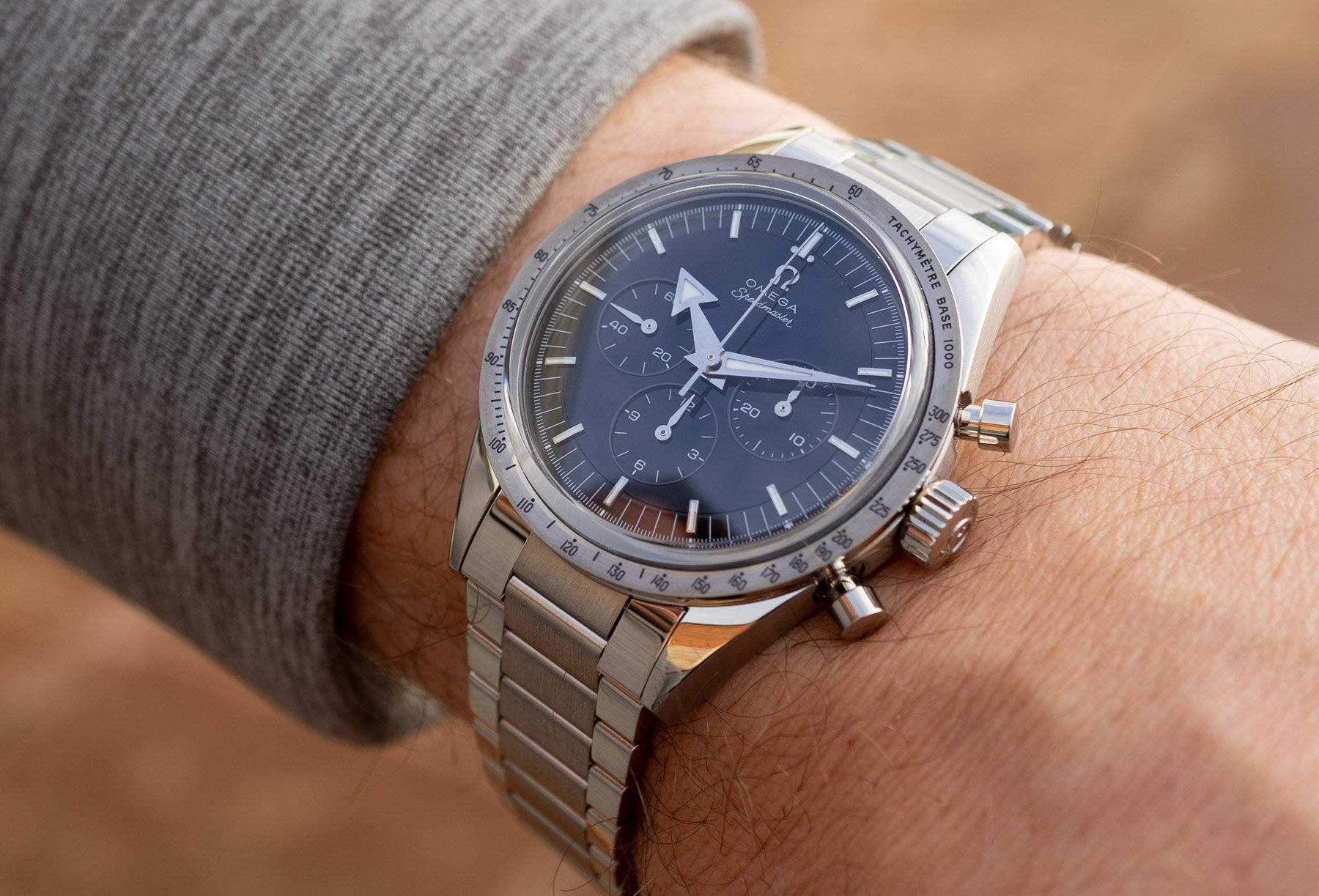 Final thoughts on the Speedmaster Calibre 321 in Canopus Gold 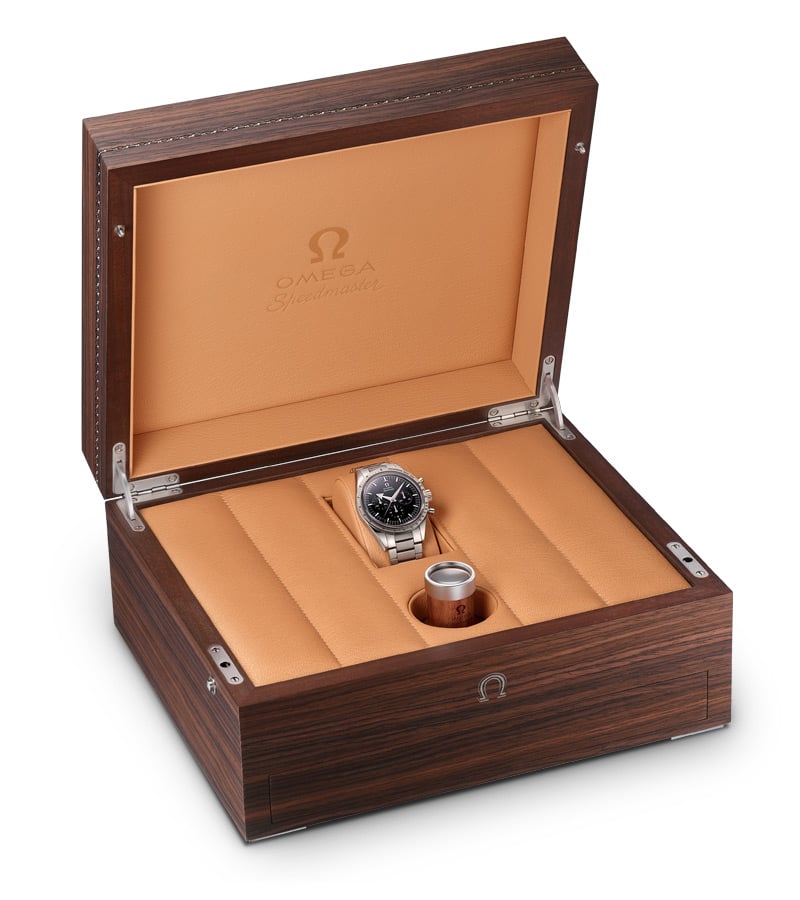 The watch will come in a huge wooden box, which bears a resemblance to rosewood (an internationally protected wood). Inside, with all the booklets and the warranty card, is a magnifying glass for your close-up ogling pleasure. 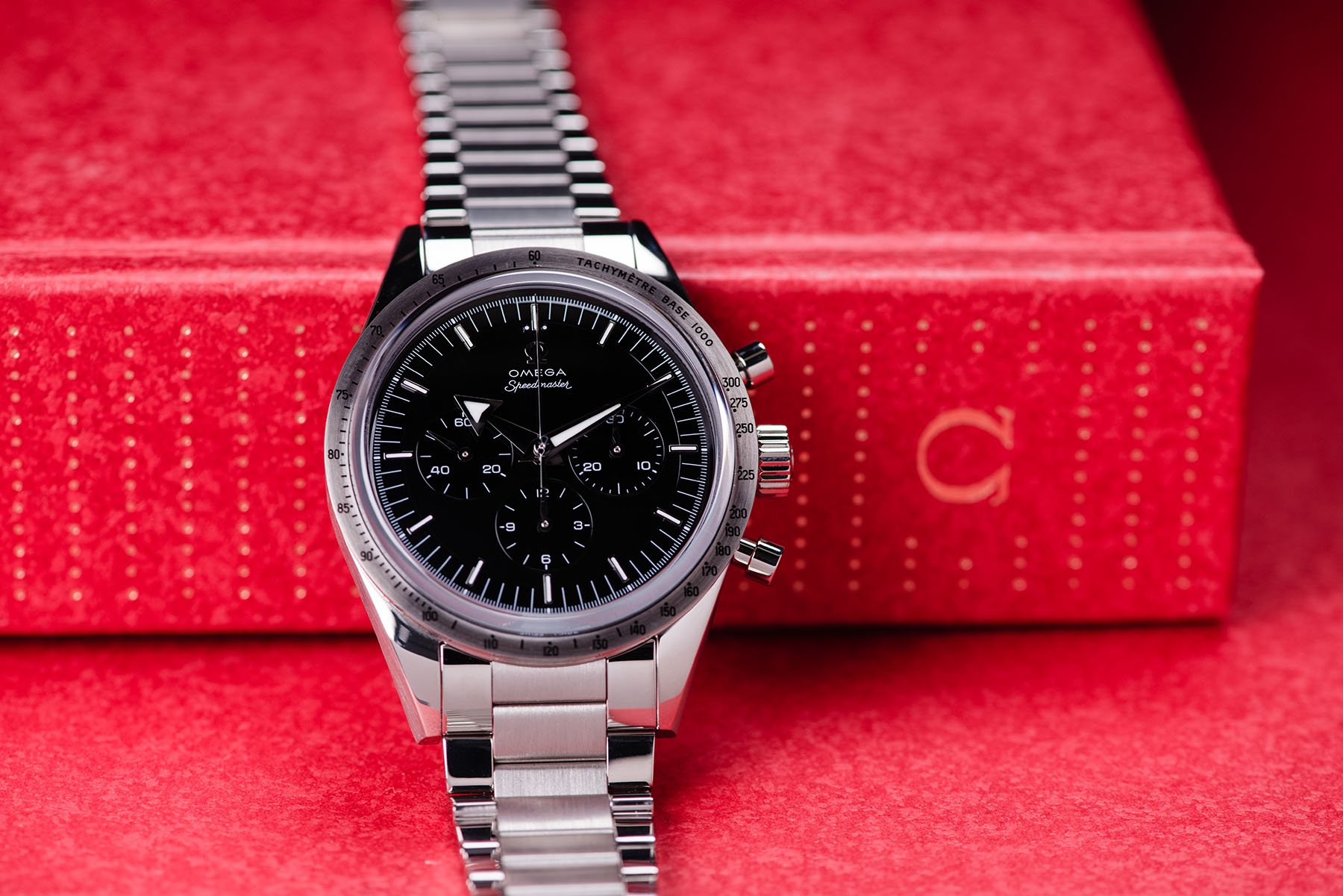 This is now is the most expensive Speedmaster in the current catalog. It makes me wonder what will happen to the second-best option for the fans of this “Broad Arrow” watch, the 60th-anniversary model from 2017, the Speedmaster ’57 reference 3594.50. If the Speedmaster Calibre 321 Canopus Gold is out of reach for you, will one of those discontinued “Broad Arrow” models be the solace you need?

You can find more information on the official Omega website, and read much, much, more about the Speedmaster here.