Oris has been making big steps over these last twelve months. Obviously, we were delighted to work with the brand on our Fratello × Oris Big Crown Bronze Pointer Date. Next to that, the brand released its new Calibre 400 to much critical acclaim. And we have seen a string of new releases, the latest being the Carl Brashear Cal. 401 Limited Edition. Now Oris is back with a new release for its “Change for the Better” campaign. The new Whale Shark Limited Edition might just be the best in the series yet. I had a chance to check it out.

Back in August of last year, I had the pleasure of trying out the Oris Aquis Hangang Limited Edition. It was a nice break from most of the watches released in the series for the “Change for the Better” campaign with its standout green colors. I greatly credit Oris for its initiatives to improve life in and around the waters of our planet. On top of that, the Aquis series is the perfect watch for the series. Not only is it fitting as Oris’s modern diving watch, there are also a great number of variations available to keep coming up with interesting limited editions. For this new Whale Shark Limited Edition, Oris releases another stunner based on the Aquis GMT divers’ watch. 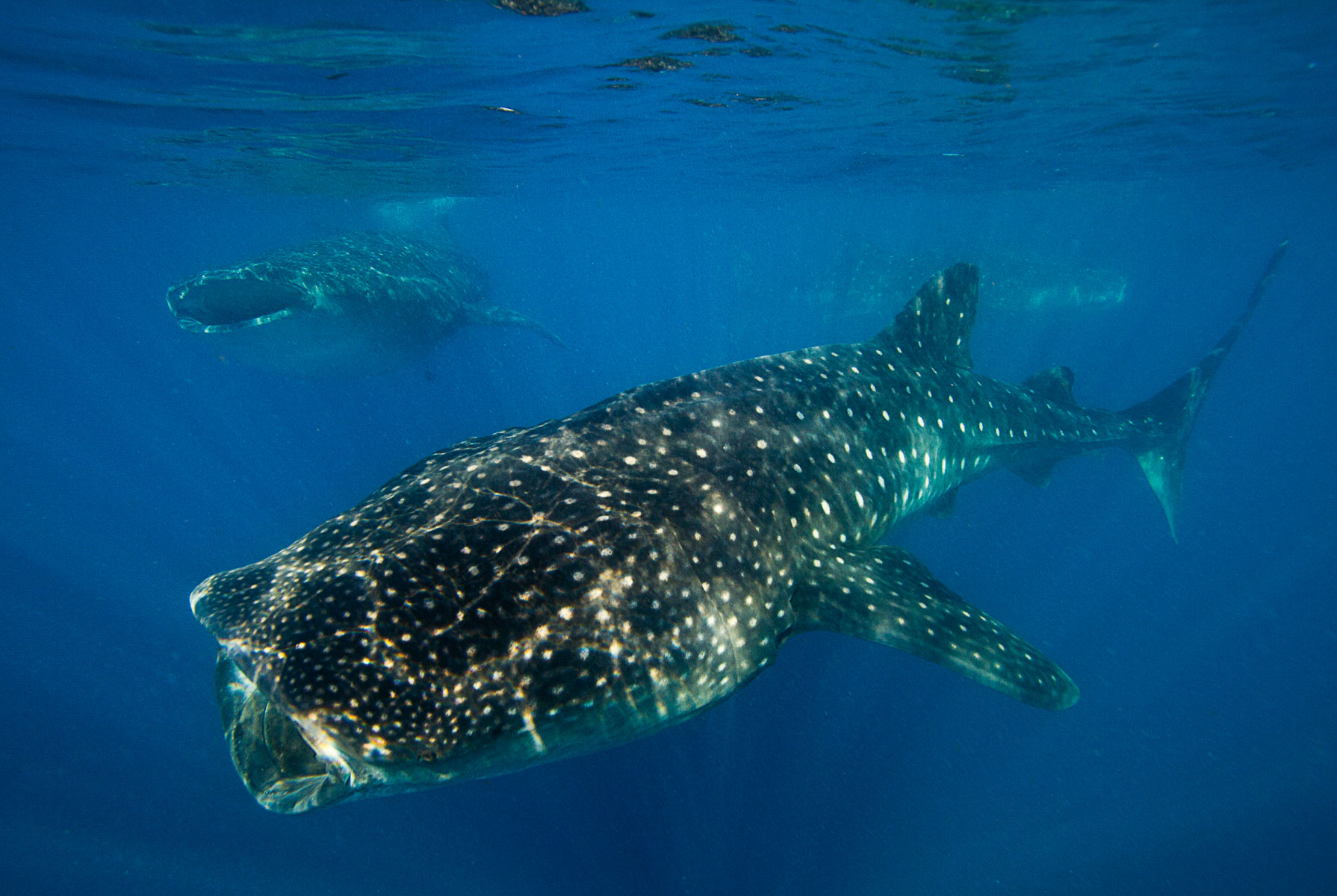 Change for the Better

Let’s freshen up our memories a little more info about the “Change for the Better” campaign: for well over a decade now, Oris has been supporting good causes all over the world with this campaign. “Change for the Better” focuses on supporting projects to clean, restore and protect the world’s water. Whether it is reef conservation, cleaning up the ocean, coral restoration, protecting the animals that live in our waters, or awareness of the overall importance of water.

The whale shark is an endangered species.

In order to support a great number of causes, Oris releases multiple limited editions per year. For this new Whale Shark Limited Edition, Oris teamed up with the International Union for Conservation of Nature (IUCN). The IUCN declared the whale shark an endangered species in 2016. The global population of the whale shark has decreased more than 50 percent in the last 75 years. According to the IUCN legal and illegal fishing, entrapment in fishing gear, and collisions with boats were responsible for the most deaths. In other words, human activity is largely to blame. 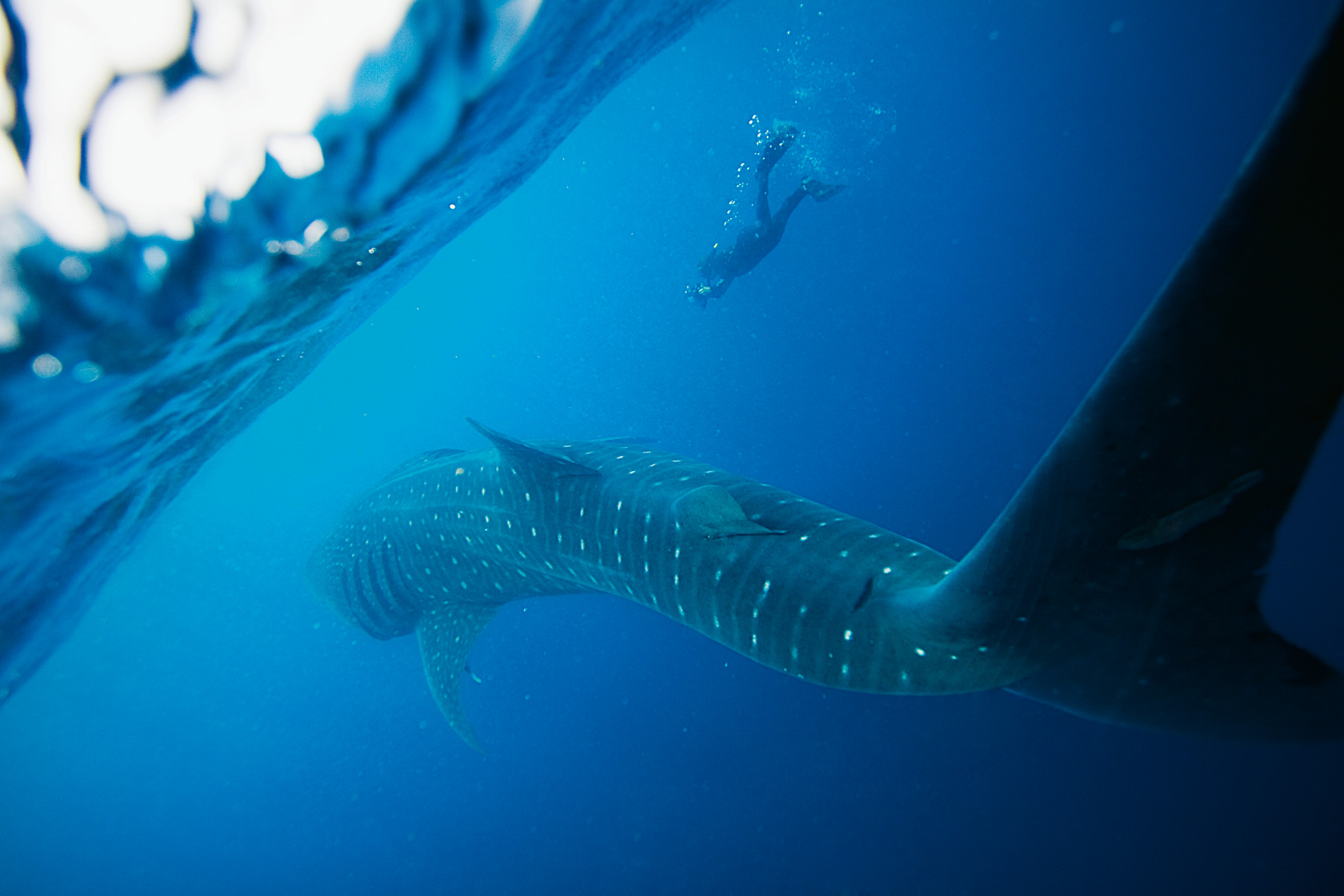 Whale sharks are the world’s largest fish and considered the ocean’s gentle giants. Oris ambassador Gerardo del Villar, an experienced explorer, and photographer has been photographing whale sharks for more than 15 years. He has been fascinated by these gentle giants because the species originated 60 million years ago and they are the only members of the prehistoric Rhincodontidae family.

Oris supports this great cause with the sale of 2,016 pieces of the Oris Whale Shark Limited Edition.

When asked how to save the whale sharks, Del Villar explains: “We need to create marine protected areas. And we need to educate people about the importance of whale sharks and curb pollution of the sea. And we need to fight against climate change. These are all essential to the conservation of this species.” As you can see, there is plenty of work to do. Oris is planning on supporting this great cause with the sale of 2,016 pieces of the Oris Whale Shark Limited Edition. 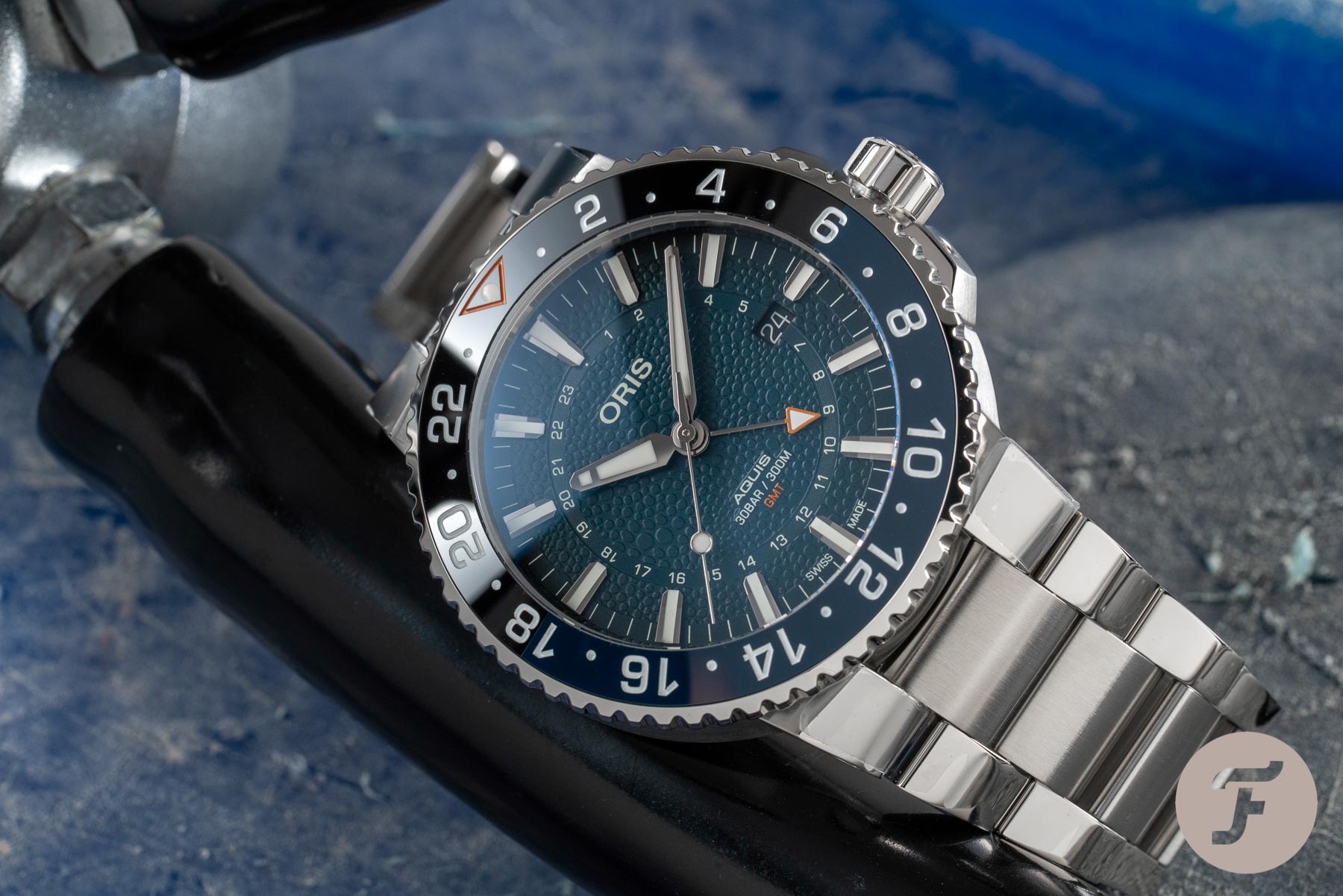 As mentioned, Oris has released watches for the “Change for the Better” campaign for over a decade. And, in that time, the brand has released some great watches supporting great causes. Last year I compiled a list of my five favorites in the series. For this new Whale Shark Limited Edition the brand chose to use the Aquis GMT dive watch as the foundation. The Oris Aquis GMT Date was introduced in 2019 and features a GMT complication that can track up to three different time zones. 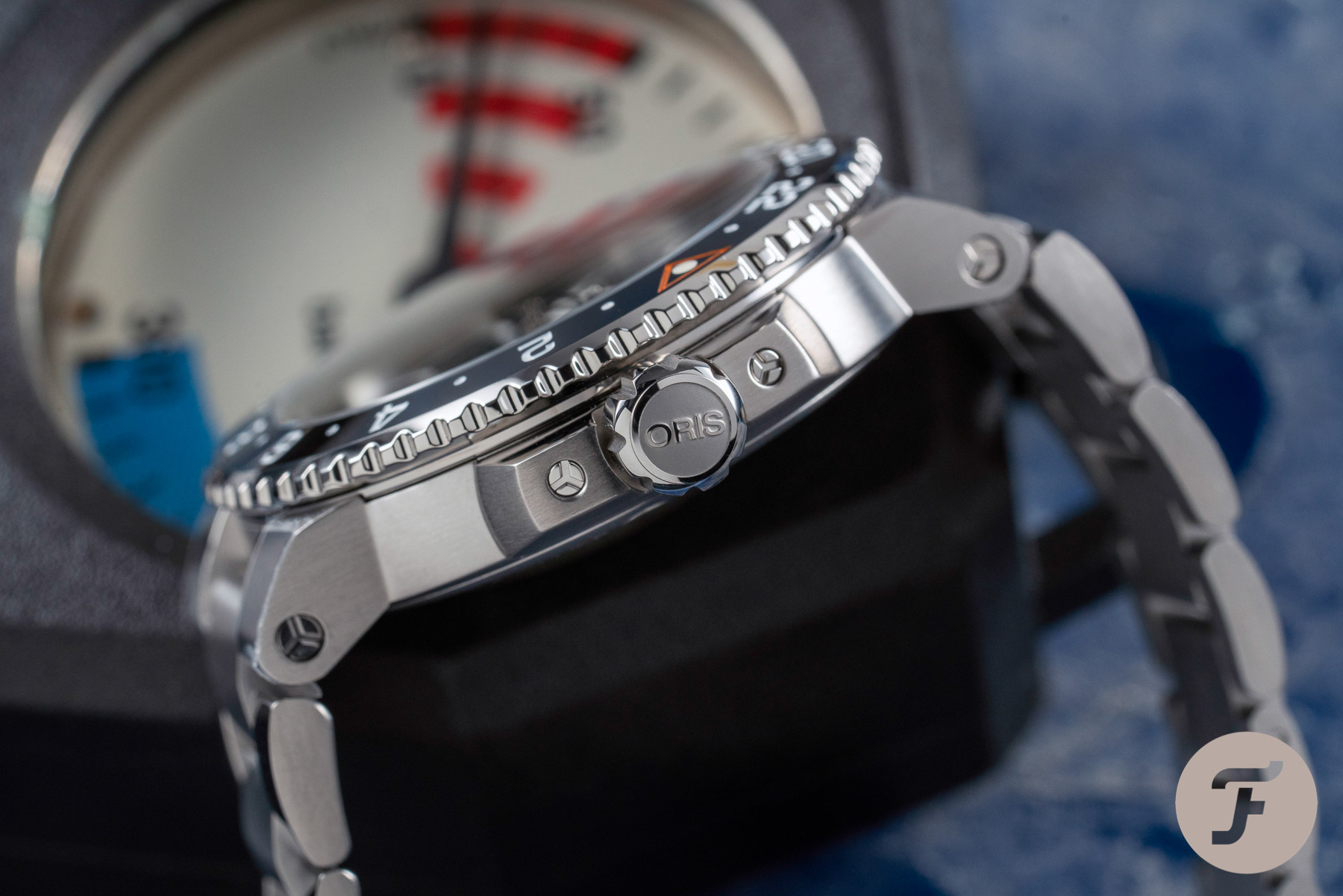 The same watch was also used for the Carysfort Reed Limited Editions that were released last year. The steel version of the Carysfort Reed Limited Editions came in third on my list of favorites. As such, it won’t be a surprise to find out that I also like this new Whale Shark Limited Edition. The 43.5mm stainless steel watch comes with the same bi-directional rotating ceramic black and blue GMT bezel that makes you look twice to see it’s actually two different colors. It’s a very nice detail. Together with the blue dial and the little orange accents on the dial, bezel, and the GMT-hand, it creates something rather refined for a divers’ watch aesthetic. 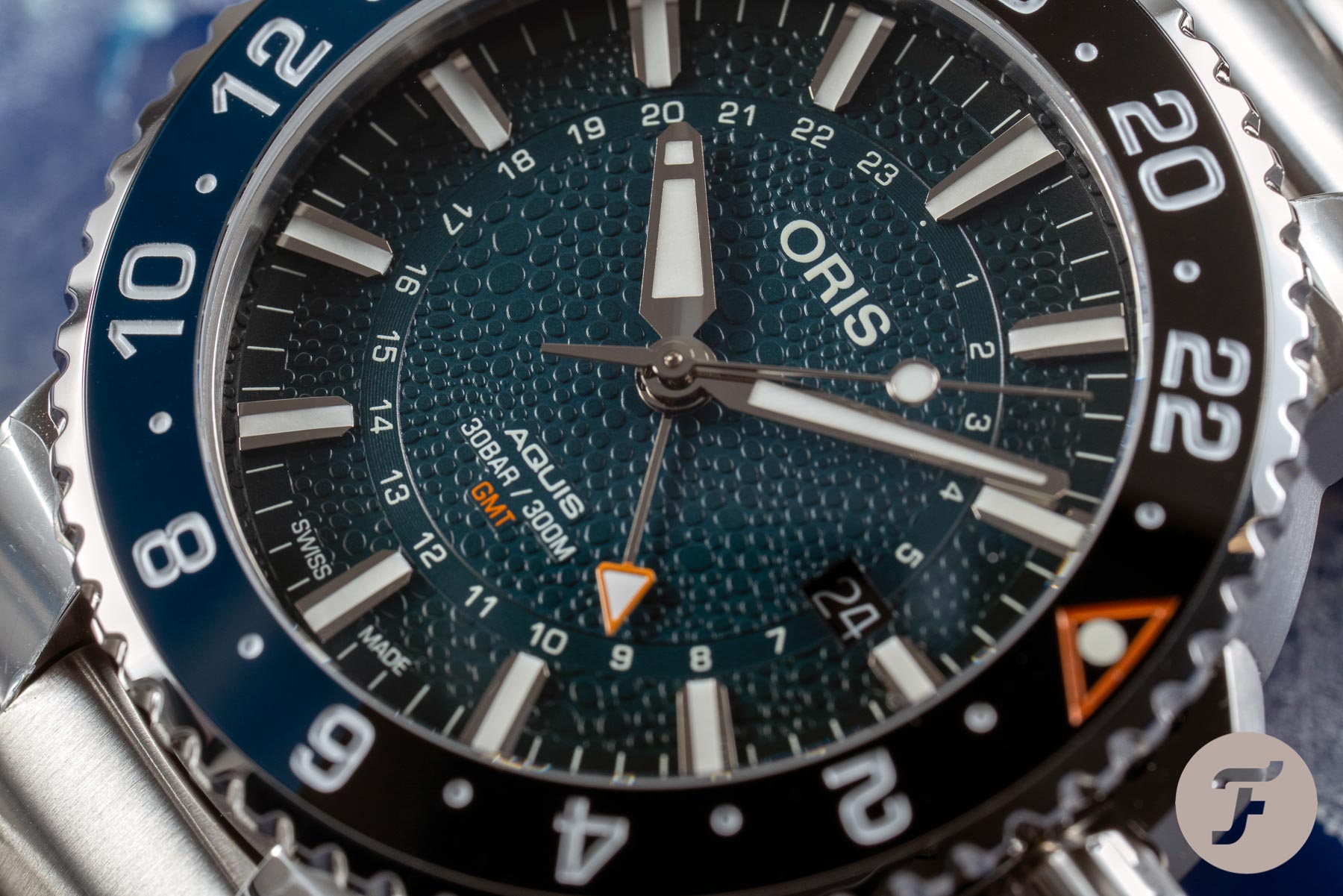 Speaking of the dial, it is the main element connecting the watch to the good cause. For the blue/green dial, Oris decided to use the whale shark’s skin as inspiration. And I have to say it’s rather stunning. Not only does it create a really nice dial texture, but it also reminds you what this watch is all about whenever you look at it. It’s a clever move because for previous editions, the connection was never this obvious. 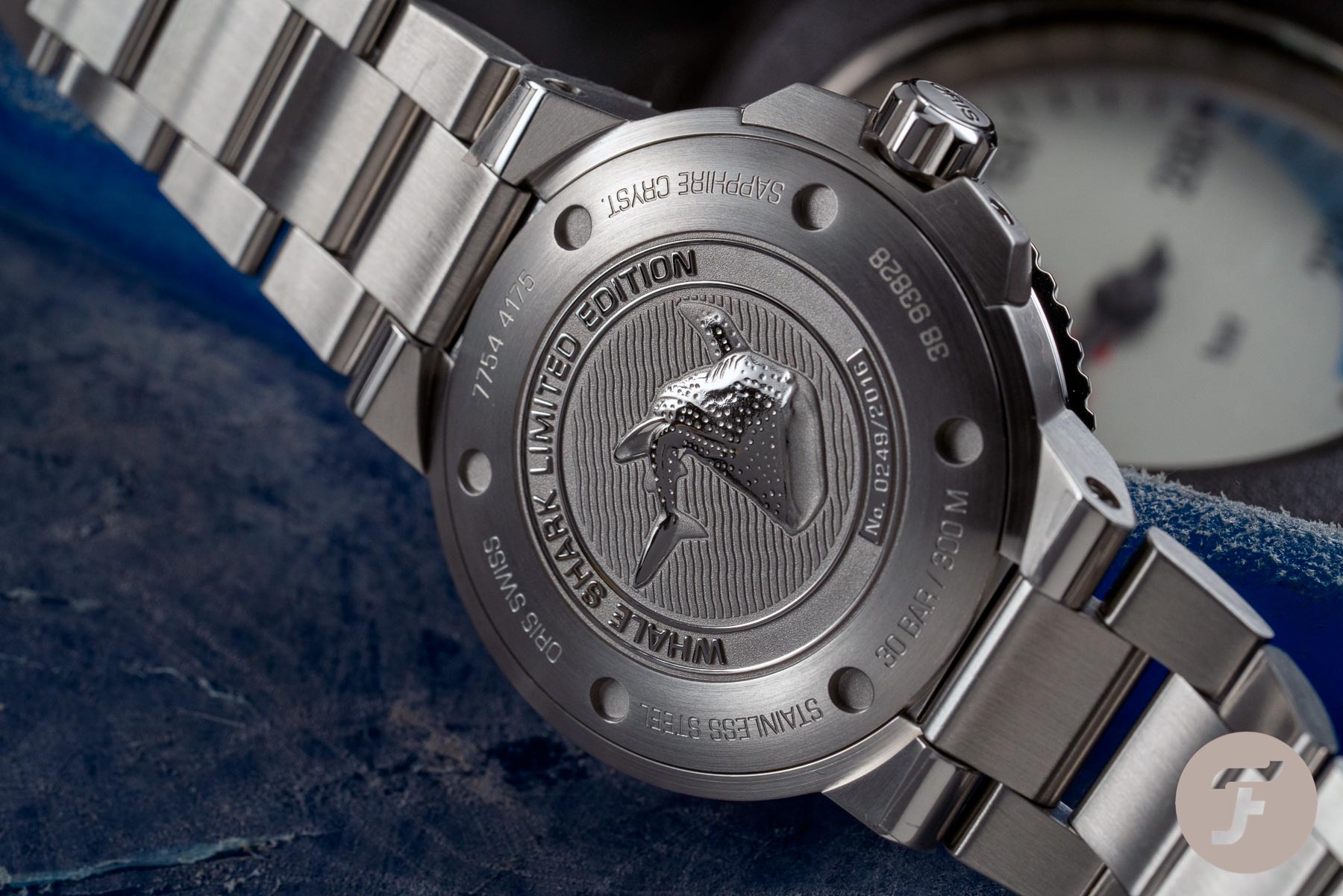 Previously the connection to its good cause came in the form of a special caseback. Either it was engraved or came with a special medallion. For the Whale Shark LE, Oris decided to have the backs engraved with an image of the whale shark itself. On top of that, it mentions the name Whale Shark Limited Edition and the personal number of your piece out of the 2,016 available pieces. Oris chose to produce 2,016 pieces to reference the year the IUCN declared the whale shark an endangered species. 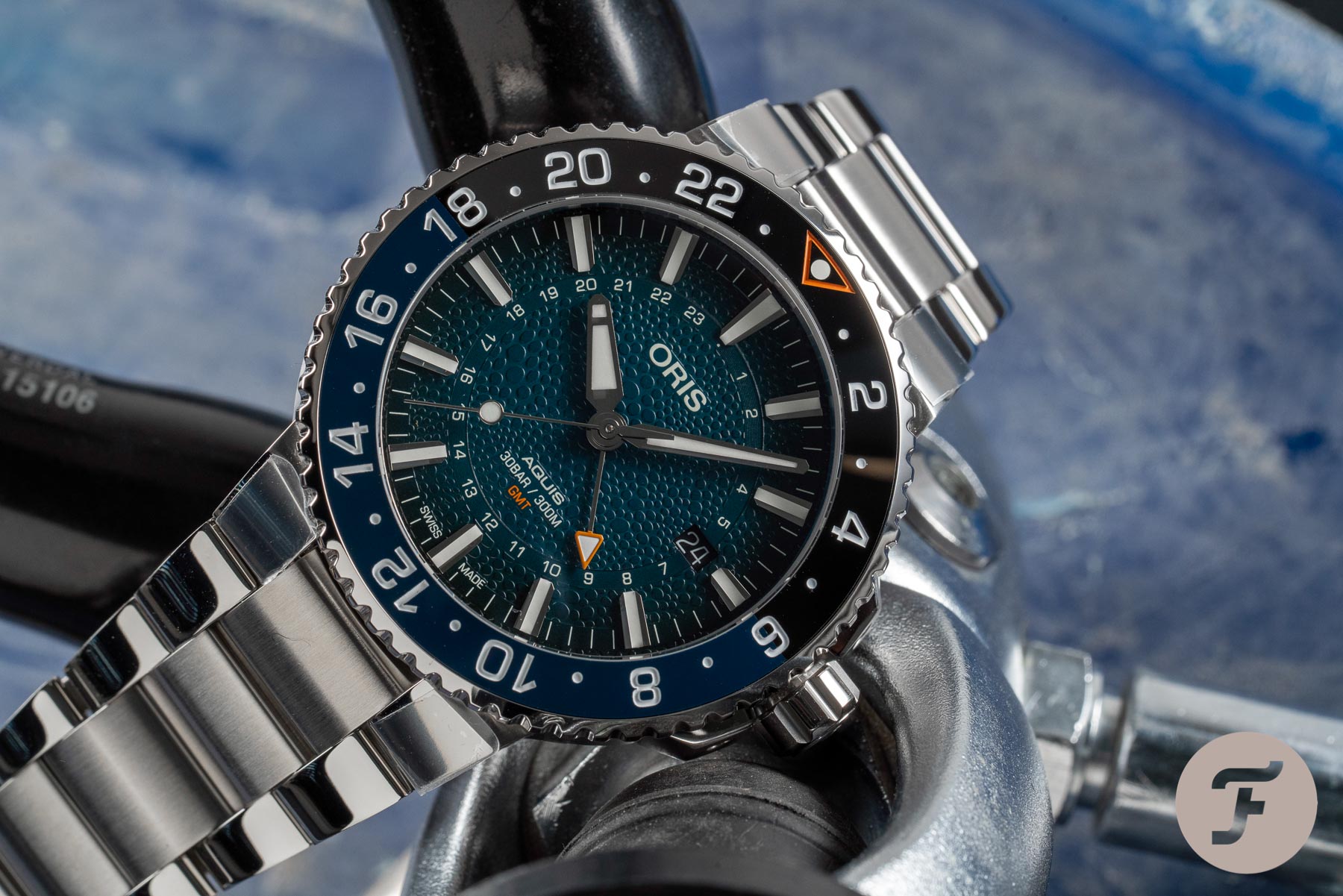 Just like with the normal Aquis GMT Date, the Whale Shark Limited Edition is water-resistant up to 300 meters and is powered by the automatic Oris Caliber 798. The movement is based on the Sellita SW 330-1 and features a GMT complication and a date indication at the 3 o’clock position. It operates at 28,800vph, has 25 jewels, and has a 42h power reserve. 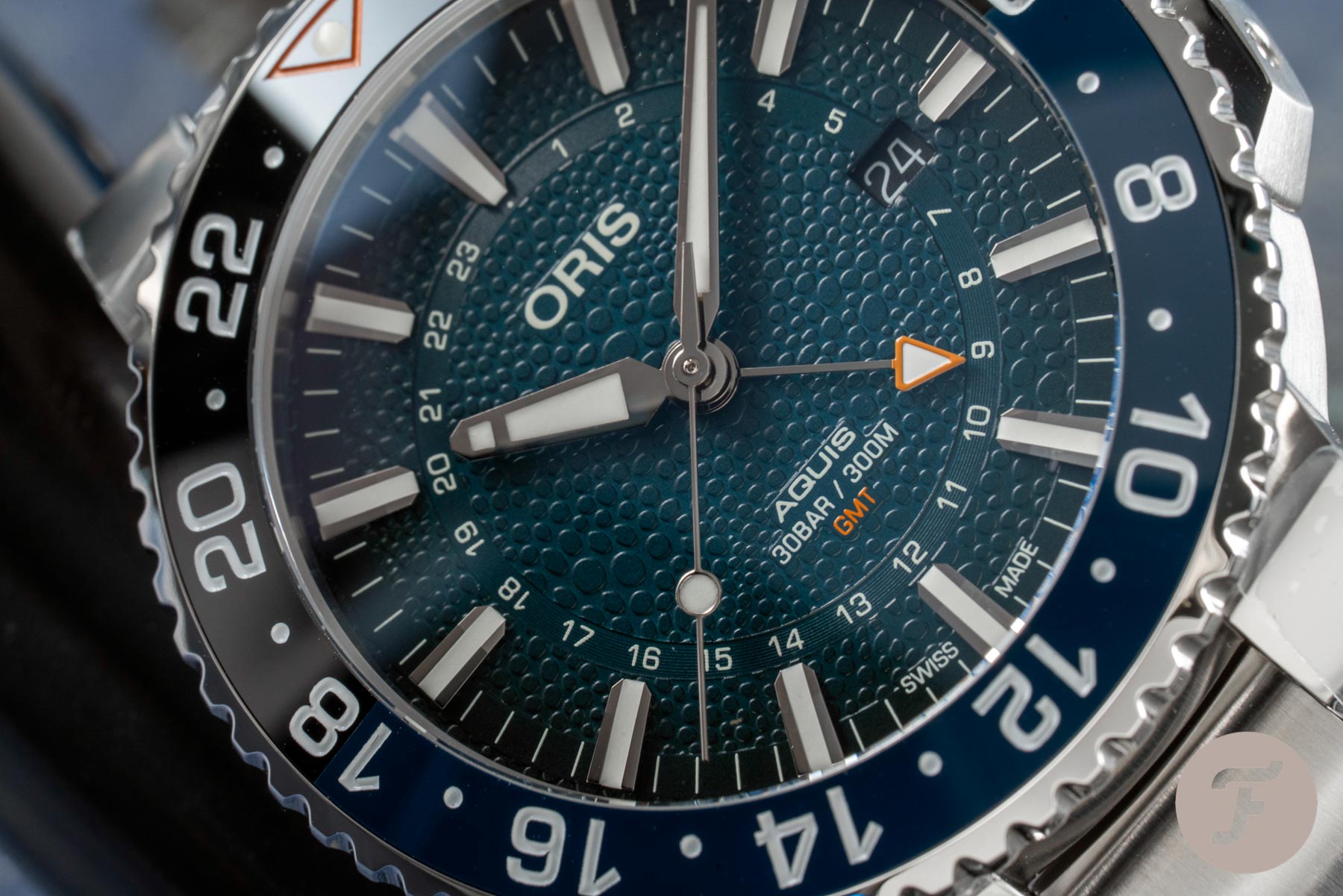 The Aquis GMT Date possesses the ability to show three different time zones. Local time can be set using the standard hour hand, home time using the GMT hand, and a third time-zone can be set by using the bidirectional GMT bezel in combination with the GMT hand. In his review of the Aquis Date GMT, Robert-Jan explained that the GMT hand can be set independently using the screw-in crown. By pulling the crown out to its first position, turning it one direction moves the GMT hand by one-hour increments. Turning it the other direction changes the date. 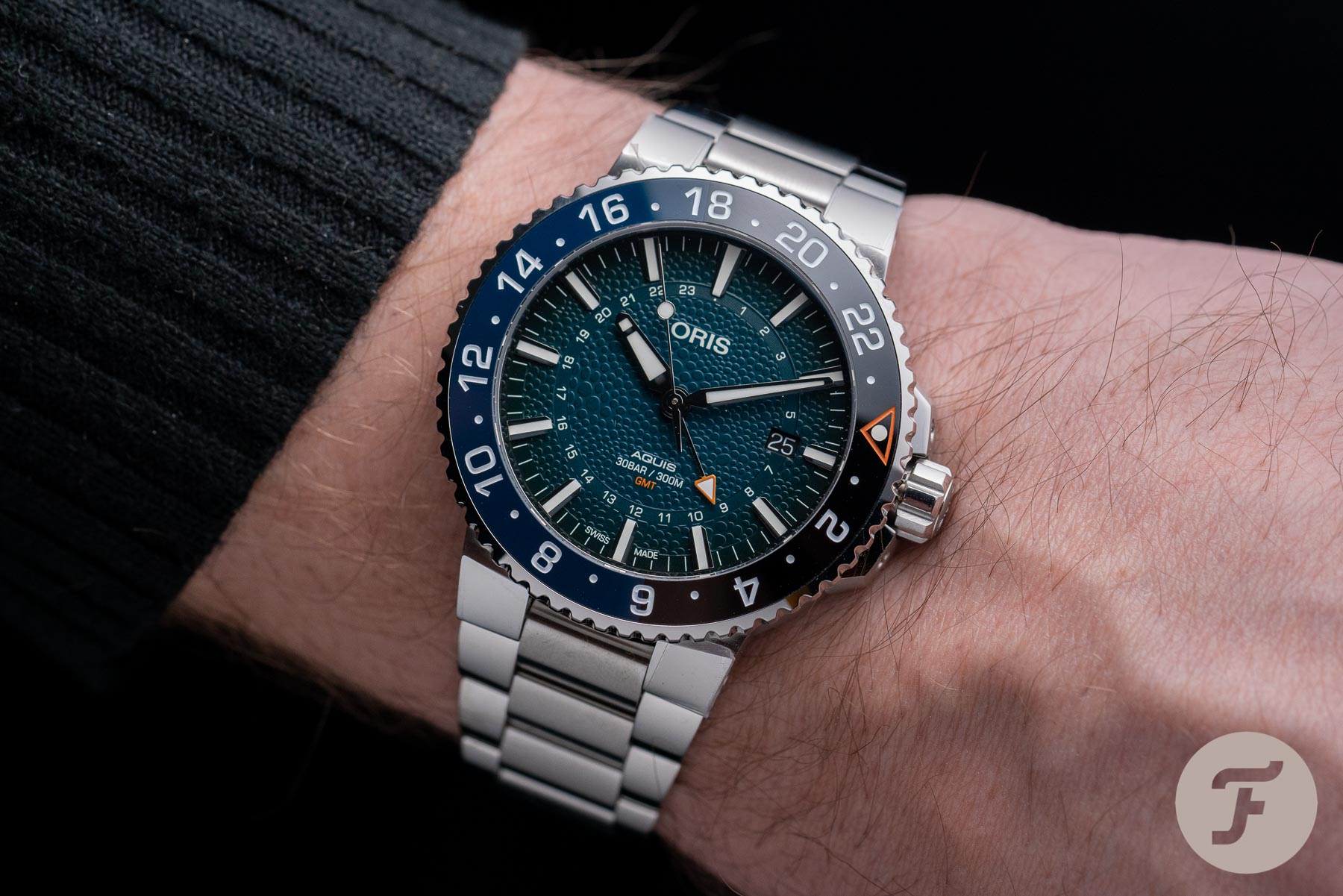 The moment I put the Whale Shark LE on my wrist, I was reminded how much I like wearing the 43.5mm Aquis models. Just as with the Hangang Limited Edition I really enjoy its size in combination with the Oyster-style stainless steel bracelet. The size is perfect for my 18cm wrist and it actually wears smaller than its size might have you think. The great quality bracelet features a combination of brushed center links and polished outer links. And like with any of the Aquis models, this Whale Shark LE would also look great on one of the available Oris rubber straps. 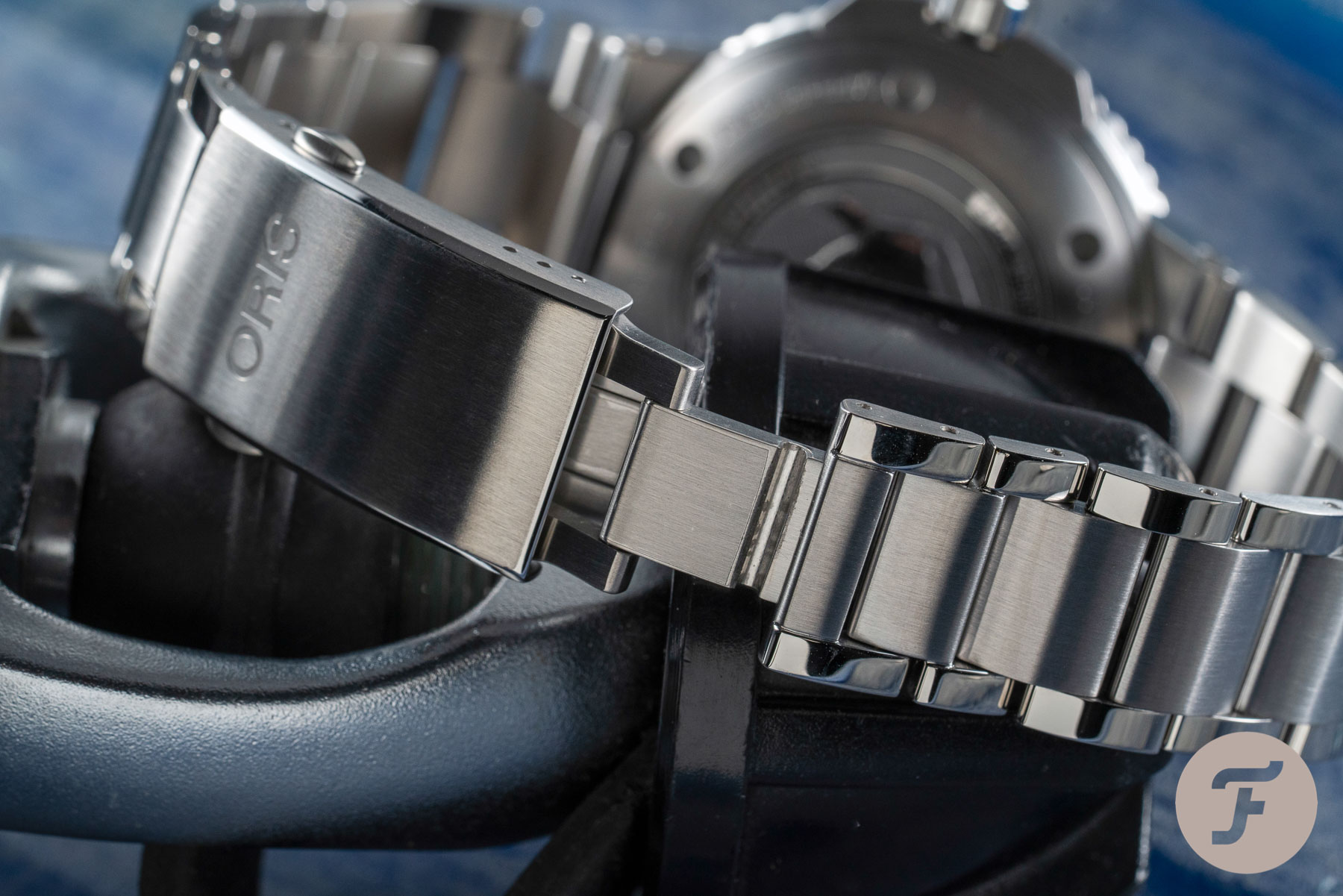 But the big star of the show is without a doubt the beautiful dial. The dials of the Aquis have always been a joy to look at but this time around it’s so different it cannot help but catch every eye lucky enough to fall upon it. As I explained, the engraved whale shark skin pattern is not only visually beautiful, but it also serves as an instant reminder of the great cause you support with the purchase of this beautiful Whale Shark Limited Edition. 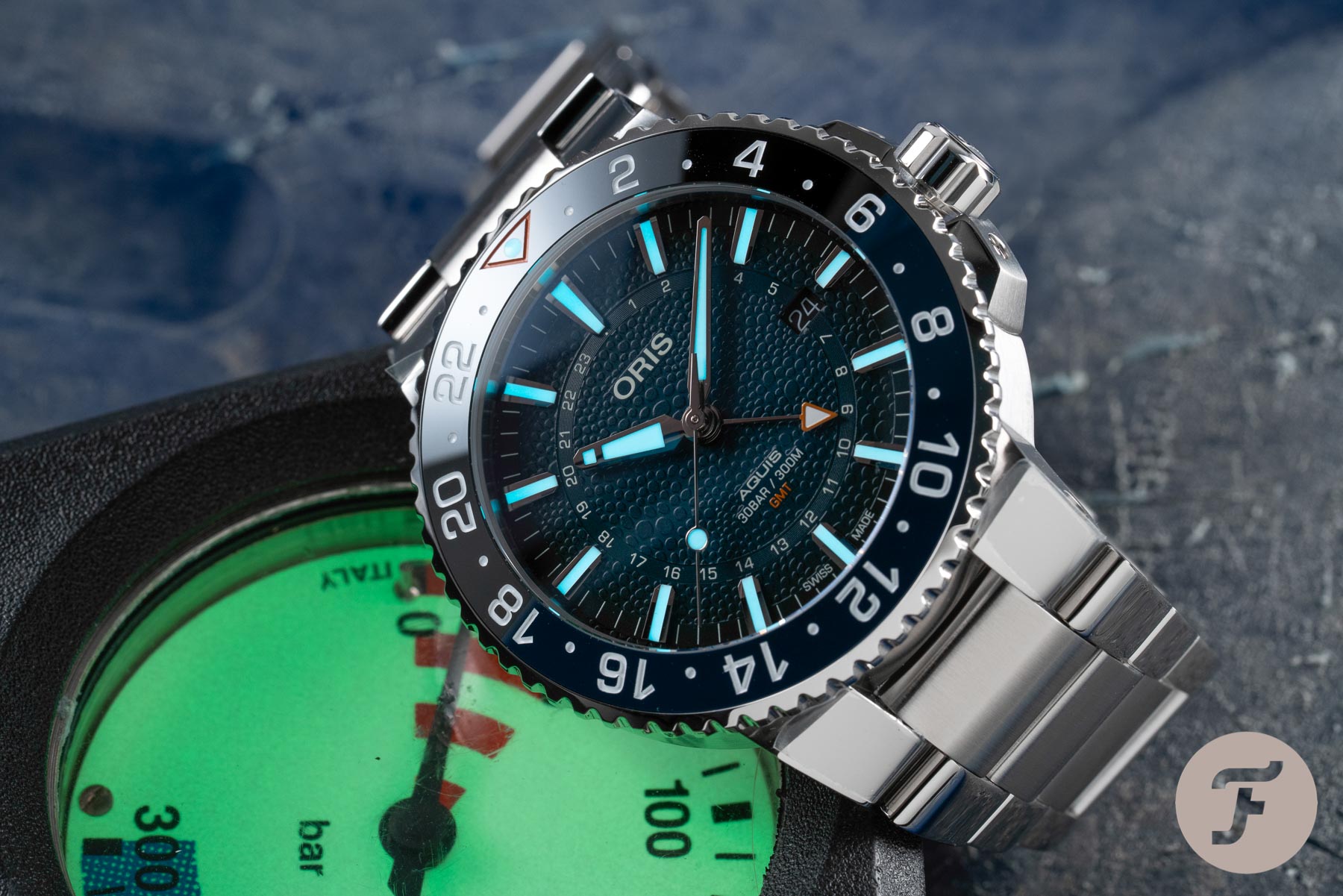 Despite a dial with many talking points, legibility remains high. The big hands and indices are filled with Super-LumiNova ensuring reading the time is never an issue. The smaller GMT hand with orange tip is humble but it’s easy to read in the 24-hour track. The date indication is not intrusive at all, creating a dial that is busier on paper than it is in practice. 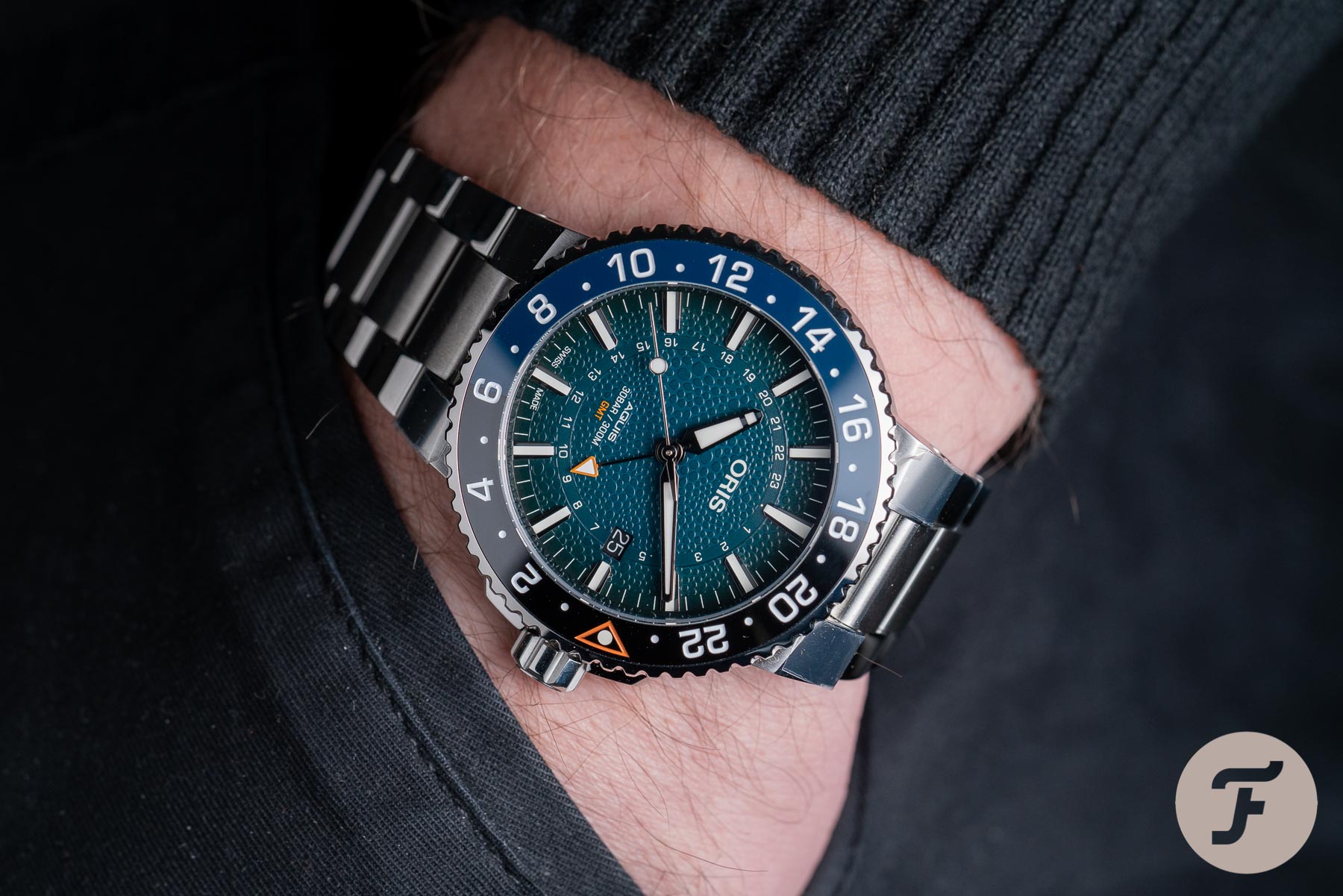 The new Oris Whale Shark Limited Edition is available now at selected retailers for €2,650. That makes it 100 Euros more expensive than the regular Aqus GMT Date. This is completely reasonable considering the terrific dial and the special engraving on the case back. On top of that, you know that you are boosting the whale shark’s chances of survival by purchasing the watch.

I have great respect for Oris and its “Change for the Better” campaign. Over the course of more than a decade, the brand has assisted many great causes vital to the preservation of our planet. In doing so, the brand has created a great series of watches. The Oris Whale Shark Limited Edition is a stunner and welcome proof that the Aquis collection can keep on surprising us with hitherto unseen dial textures. Let’s hope Oris continues experimenting in that vein in the years to come!