The Seiko Astron GPS Solar receives an update that will make it thinner, smaller and less energy consuming. Oh, and there is a very cool new bracelet that comes with it. Although this watch will be available from December onwards, we had the opportunity to see, try and photograph it already.

Besides the impressive technology and its specifications, the watch really looks good. Perhaps you remember Michael Stockton’s hands-on review of the previous/current Seiko Astron GPS Solar (find it here), I think it is a safe bet to say that this new version (we have reference SSH003 here) would fix the minor issues (mainly based on size) he had with that one. 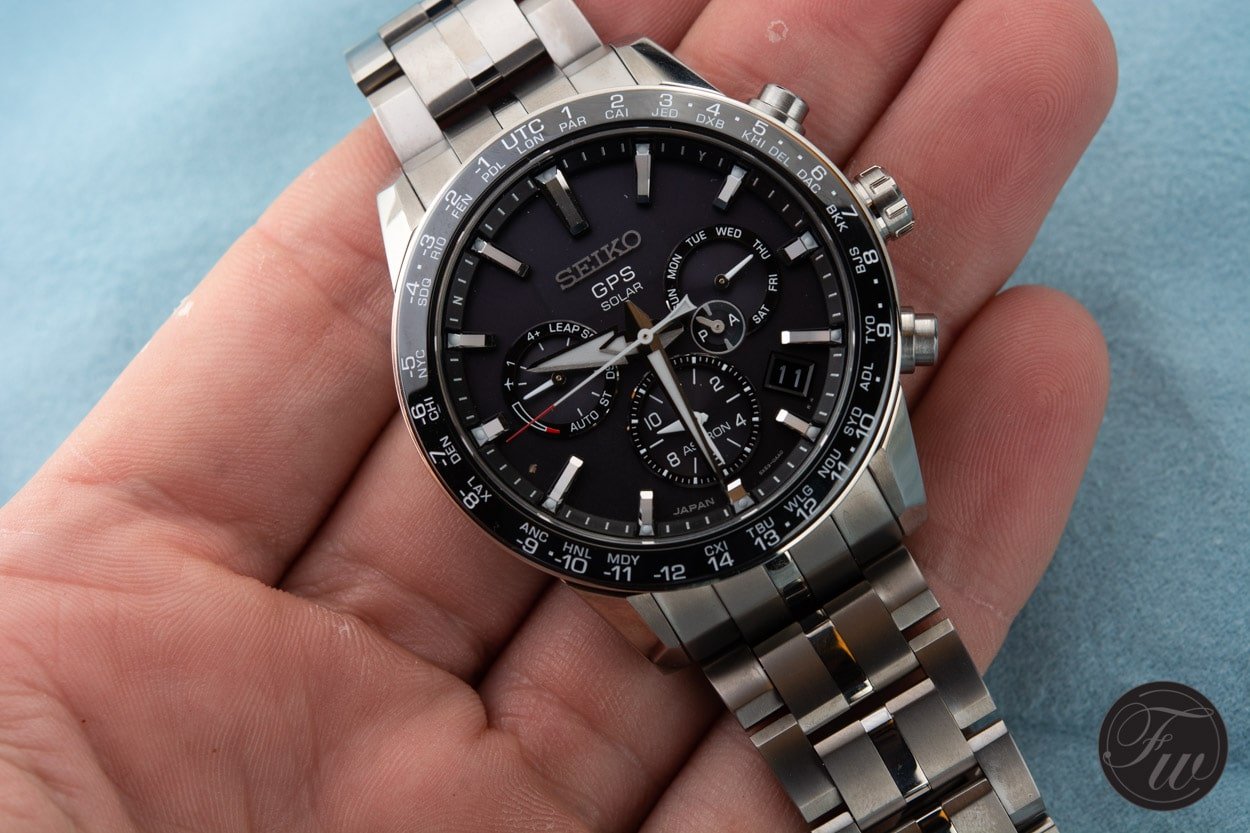 An in-depth article on the previous Astron GPS Solar collection, that was introduced in 2012 and updated in 2015, can be found in this report we wrote a while ago. In short, the Astron has nothing to do with the original 1969 quartz watch from Seiko (the watch that singlehandedly started the Swiss watch crisis you could say), but everything with being a GPS controlled watch. You have radio-controlled watches that get an impulse via one of the transmitters that are based at several locations in the world. These watches are very accurate, but GPS is even more accurate. This Seiko Astron GPS Solar SHH003 is using a new caliber, the 5X series, that has a number of advantages compared to the previous 8X series.

For starters, the new movement is smaller and thinner than its predecessors. This enabled Seiko to design and manufacture an Astron GPS Solar watch with very interesting dimensions. The previous Seiko Astron GPS Solar had a diameter of 44.6mm and Michael commented in his review that “I do hope that Seiko continues to hone and miniaturize the Astron’s technology in an effort to create a piece with a 40-42mm diameter.”. A case diameter of 40mm wasn’t possible apparently, but Seiko managed to bring it down to 42.9mm x 12.2mm. Despite being smaller and thinner, the Caliber 5X also allows the Astron GPS Solar watch to be faster and more intuitive. This is because every single component in this movement has been re-engineered. For example, all hands are now able to move independently, which allows the hands to move to the correct/actual timezone within a few moments (advancing 14 hours from Tokyo to New York, for example, takes just 3 seconds). The accuracy remains unchanged of course, as it is GPS controlled and has the precision of one second every 100,000 years. 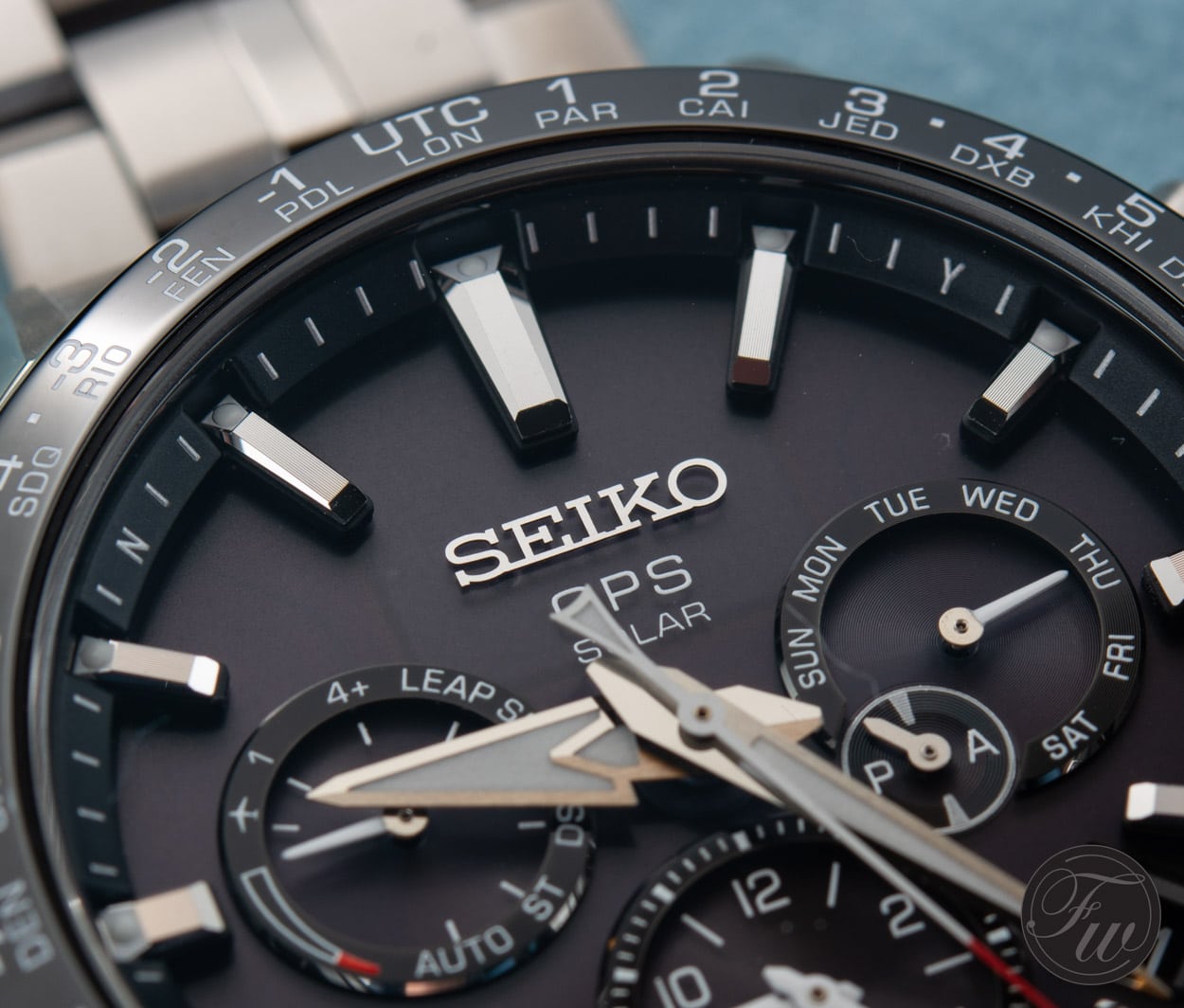 The new Seiko Astron GPS Solar SSH003 connects twice a day to the satellite network, once when the sensor in the dial is triggered by sunlight and the second trigger is set by the owner of the watch. Of course, the watch can also be adjusted by using the pusher. According to Seiko, this watch will never need a battery replacement as it is solar powered. I do wonder what the life duration is of a battery cell though, even when it is rechargeable. But, given the fact that nothing is forever, it is something you can probably deal with, even when it has to be replaced at some point.

As you can see, the Seiko Astron GPS Solar SSH003 has a second timezone feature. In the subdial at 6 o’clock you will find the home time located. The 9 o’clock subdial shows a selector and the subdial at 3 o’clock is the day indicator. Part of that subdial is the AM/PM indicator. The date aperture is located at 4.3o. 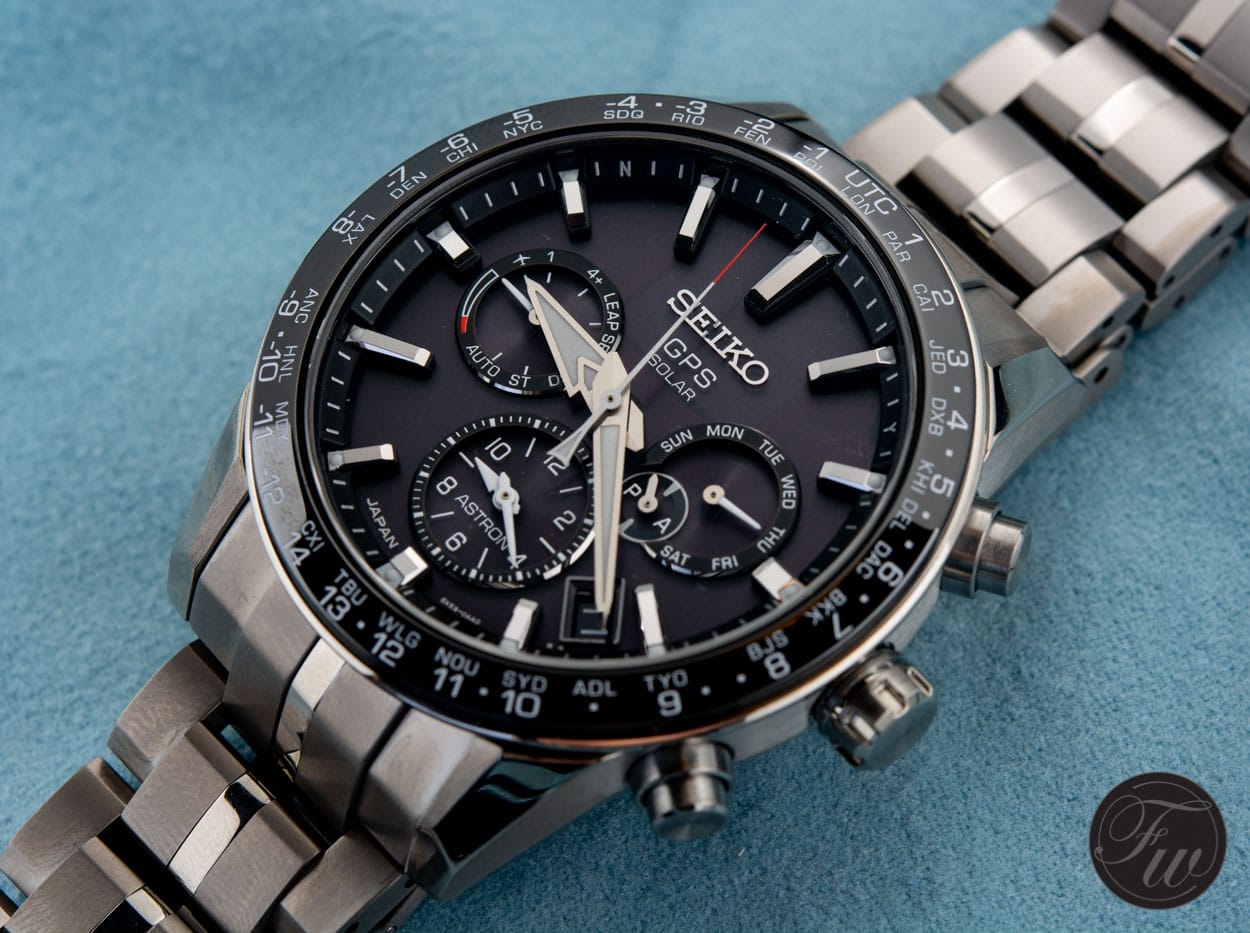 To start with the bracelet, it is very light-weight because it is made of titanium and very comfortable. The design changed a bit from the previous version, and the clasp now has a micro adjustment feature. A very welcome addition to the bracelet, especially when the temperature is changing, a micro adjustment definitely increases the wearing pleasure. No need to fiddle with a little pin or toothpick, you can just push the buttons on the clasp and slide the bracelet in and out a bit. I gave it a try and it works like a charm, I wish they will incorporate this functionality in other bracelets as well. The overall impression of the titanium bracelet is very good. 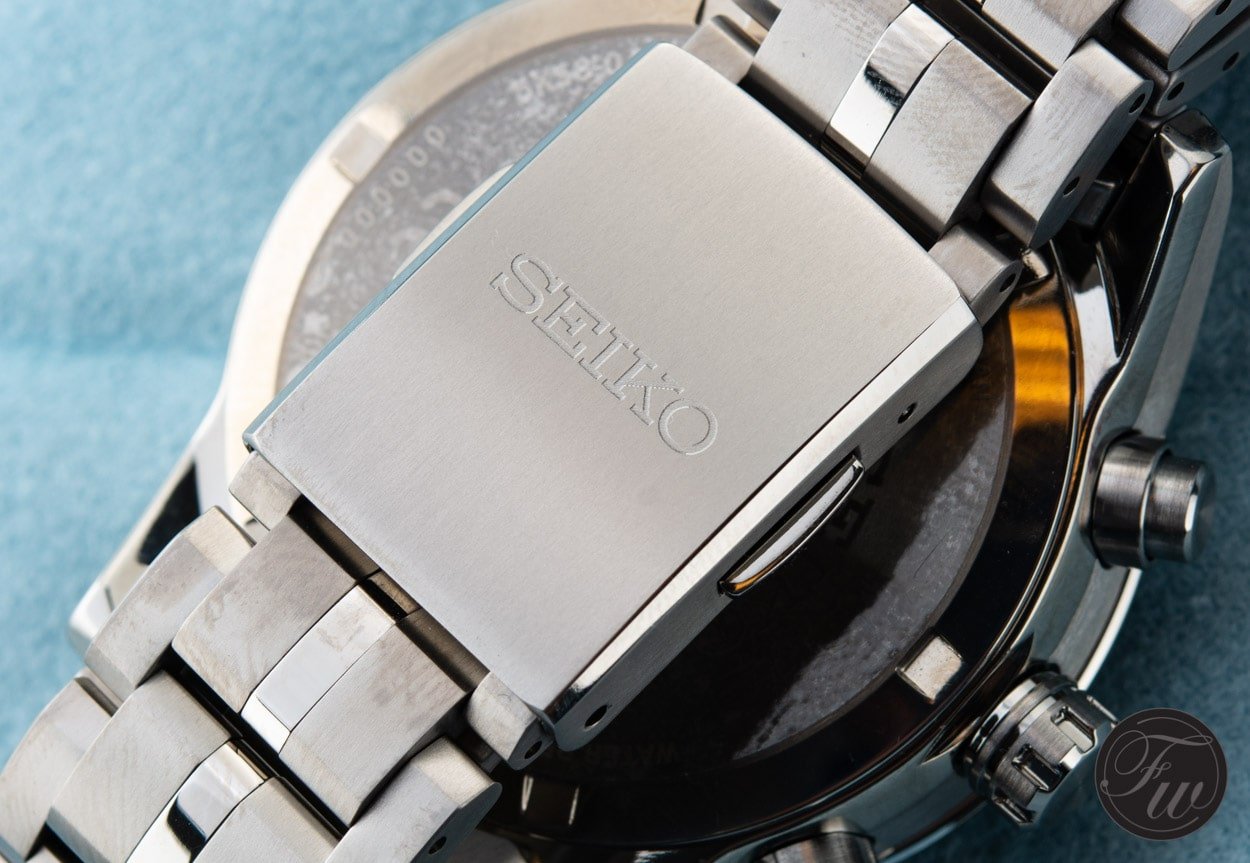 Now, the case is also made of titanium and just like the bracelet has been treated with a super-hard coating. Seiko applied their famous Zaratsu polishing, creating a lot of different facets on the case. The lugs reminded me a bit of the famous 44GS case, but the case is a bit thinner than those. Looking at the case and hands through my macro lens, I felt that Seiko is applying some typical “Grand Seiko” elements to some of the Astron, Presage and Prospex watches. That’s very good news for the potential buyers of these watches, including the Astron GPS Solar, but it makes the necessity for owning a “Grand Seiko” perhaps a bit less relevant for those who buy one of these watches with some of these typical GS features. On the other hand, it can also inspire them to – finally – pull the trigger and buy a Grand Seiko. It is basically what happened to me in recent years, I was so impressed by the Sumo that I started longing for a Marinemaster. The Marinemaster (and its quality and finish) made me realize that I should own a Grand Seiko at some point (and I do now). 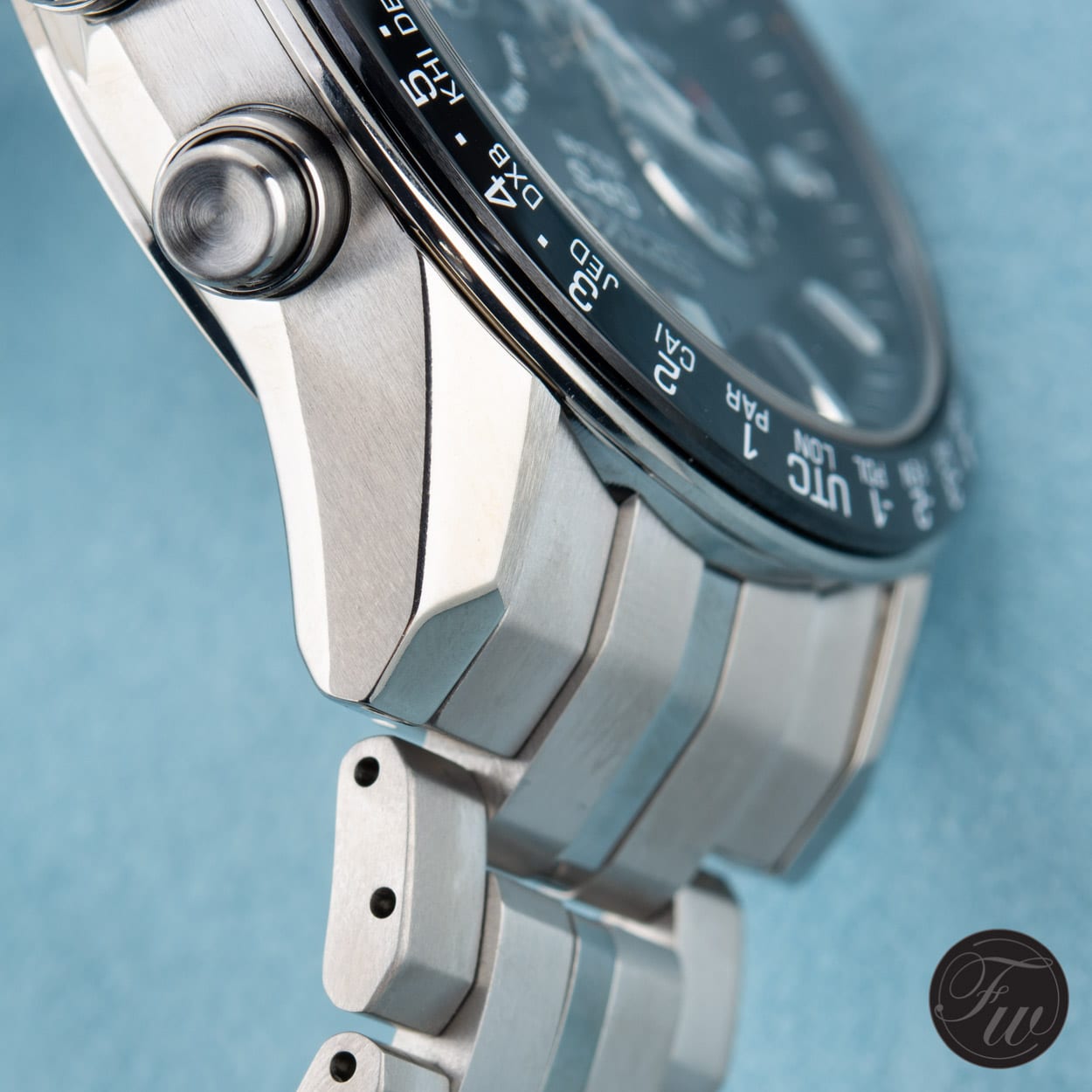 The Astron GPS Solar SSH003 reference will be available in December, but there will be more versions that have the new calibre 5X movement, of course. In total there will be four variations, including a limited edition of 2000 pieces. The limited edition is inspired by the remarkable astronomical phenomenon of the supernova, a star that, at the end of its life, explodes and releases vast amounts of energy. We will see what that means when it will be announced. In February 2019, Seiko will release two more Astron GPS Solar variations. 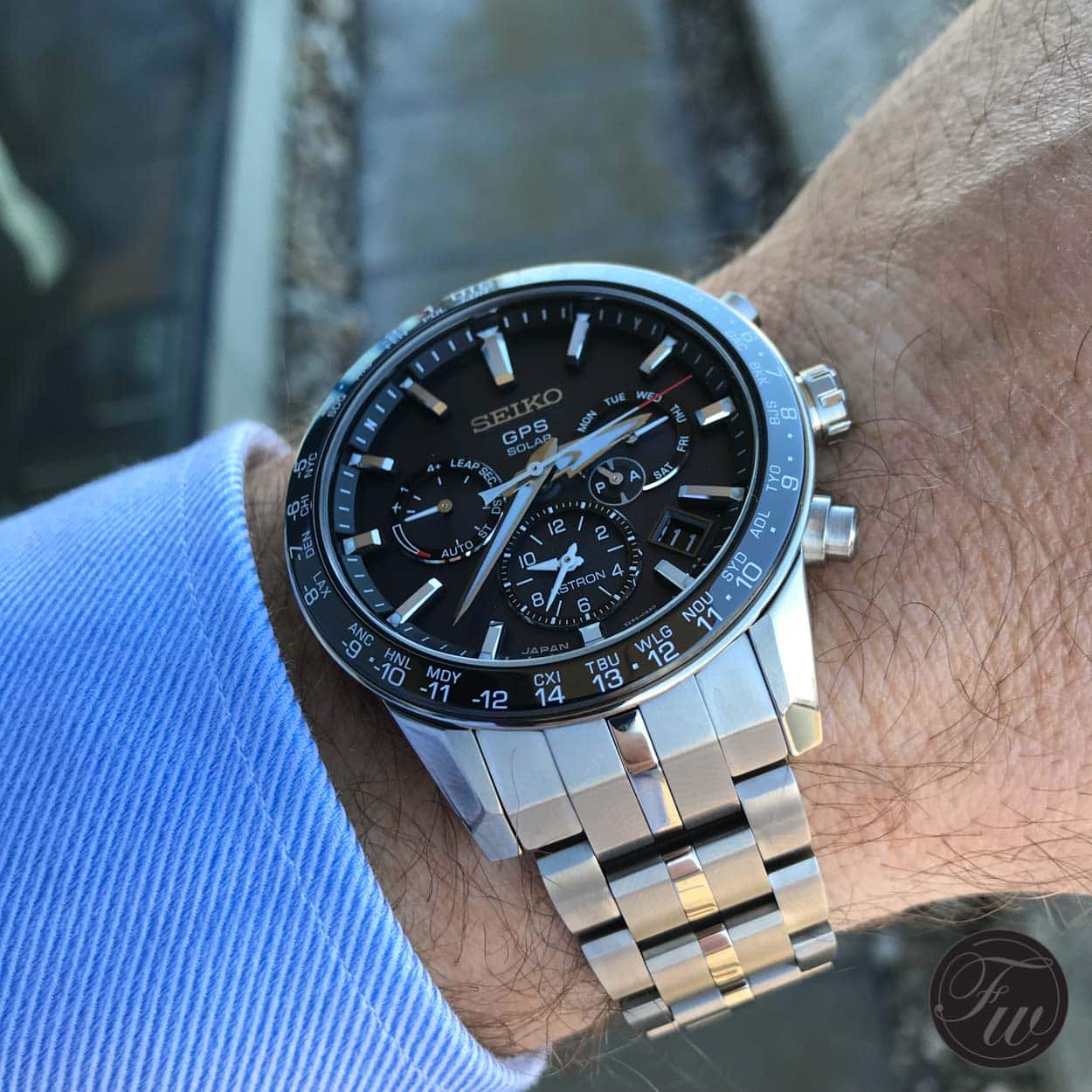 Last but not least, an overview of the specifications of the new calibre 5X movement:

Hot Topics
Introducing: The New Seamaster Professional 300M 60 Years Of Bond — With A Special Animated Case Back
105 comments
Are You Still After An Omega × Swatch MoonSwatch?
97 comments
It’s Time To Invest In A Dress Watch — Our Picks From Breguet, Omega, Grand Seiko, And More
73 comments
Introducing: The Oris Divers Sixty-Five Fratello Limited Edition
68 comments
The Rolex Waitlist Conundrum — How Much Will The Price Of Your Watch Increase While You Wait?
50 comments
Popular
Rolex Submariner – Historical Overview Of A Diving Legend
Robert-Jan Broer
22
Two Patek Philippe Nautilus Watches: 3700/1A Versus 5711/1A
Robert-Jan Broer
16
Speedy Tuesday – Olympic Games 2020 Speedmaster For the Japan Market
Robert-Jan Broer
3