We rarely cover watches promoted on the crowdfunding source Kickstarter, but today we’ll take a look at what I’d consider to be a very well executed “retro racing” inspired piece, the Straton Syncro. I think that what you’ll see after reading this is that we are in a new era of flexible manufacturing and this allows for near limitless customization. Think of these micro brands as semi-analogous to craft beer because they answer the call for so many watch collectors and buyers – the desire to buy something off the beaten path that’s made to an individual’s tastes. These small brand products are something that large companies with large management structures and other internal requirements struggle to offer quickly and, most importantly, affordably. 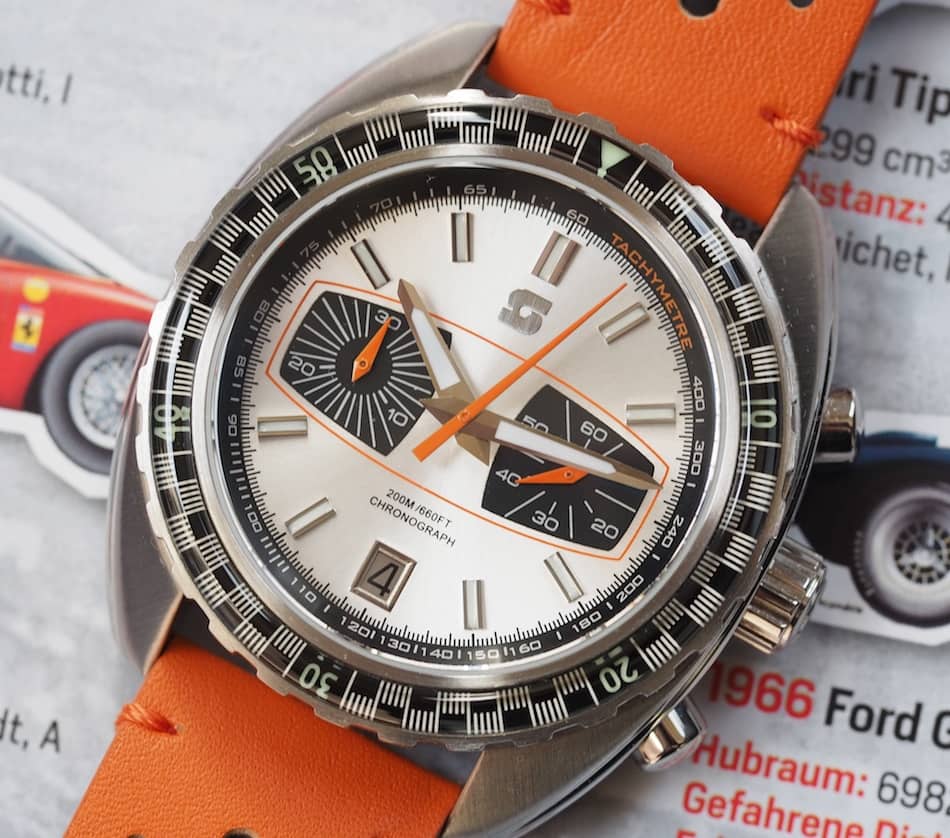 Straton Watch Company was started by Kyle Schut, a South African now living in Switzerland, in 2015. Since that time, Straton has “kicked off” two different watches on Kickstarter, first the Vintage Driver Chrono and then the Curve-Chrono. The watches collectively raised about 350,000 CHF and, furthermore, Kyle and his company have received rave reviews for their customer service and the quality of the pieces overall – a 24 month warranty is standard. The watches bring in a very 1970’s racing style complete with color combinations evoking legendary racing teams such as Martini. Since that time, Straton has also released some great looking lifestyle products such as leather bags and gloves, but we’re here to talk about watches, right? And so just a couple weeks ago, on February 1, 2017, the Straton Syncro was launched on Kickstarter. With 21 days to go, the watch has raised over 155,000 CHF and actually funded its 15,000 CHF goal in less than 1 minute. We’ve been going hands-on with two examples of the Syncro and you can color us as impressed. 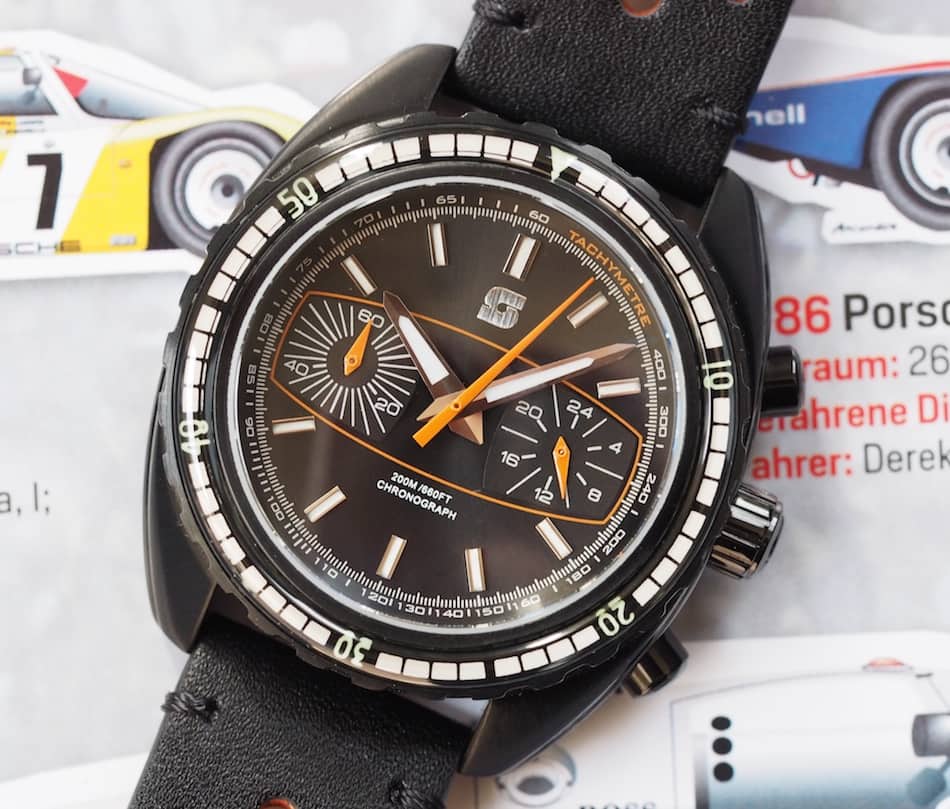 Offered in both 40 and 44mm diameter cases, with a height of 14.9mm, in either full stainless steel or DLC black, each is offered in five different dial styles. Somewhat similar to a 1970’s styled Autavia, the Straton Syncro comes with a rotating bezel. The unidirectional bezel is domed itself and either a checkered “rally style” version or a more traditional diver style can be selected. Also, like the dial, the bezels feature bright C3 Superluminova. 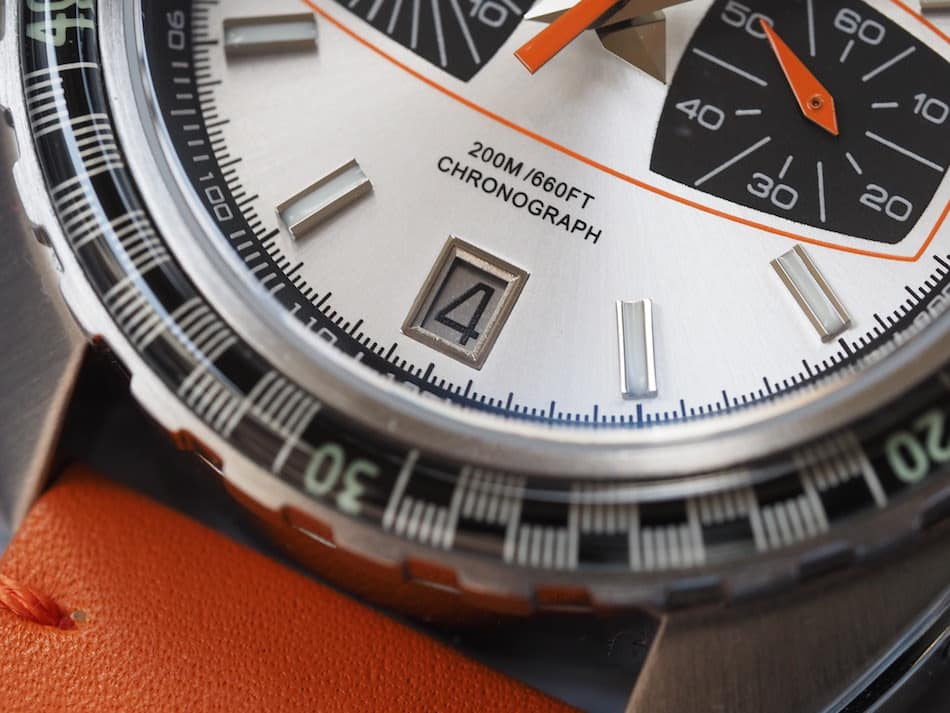 Dial-wise, the Straton Syncro reminds me of either Valjoux 7733 or 7734 chronographs from the 1970’s. I reference both vintage movements because they’re bi-register pieces and, in another nod to customization, the Syncro can be ordered with or without date. If chosen, the date window is tastefully placed at 6:00 like so many of our favorite old-time references. 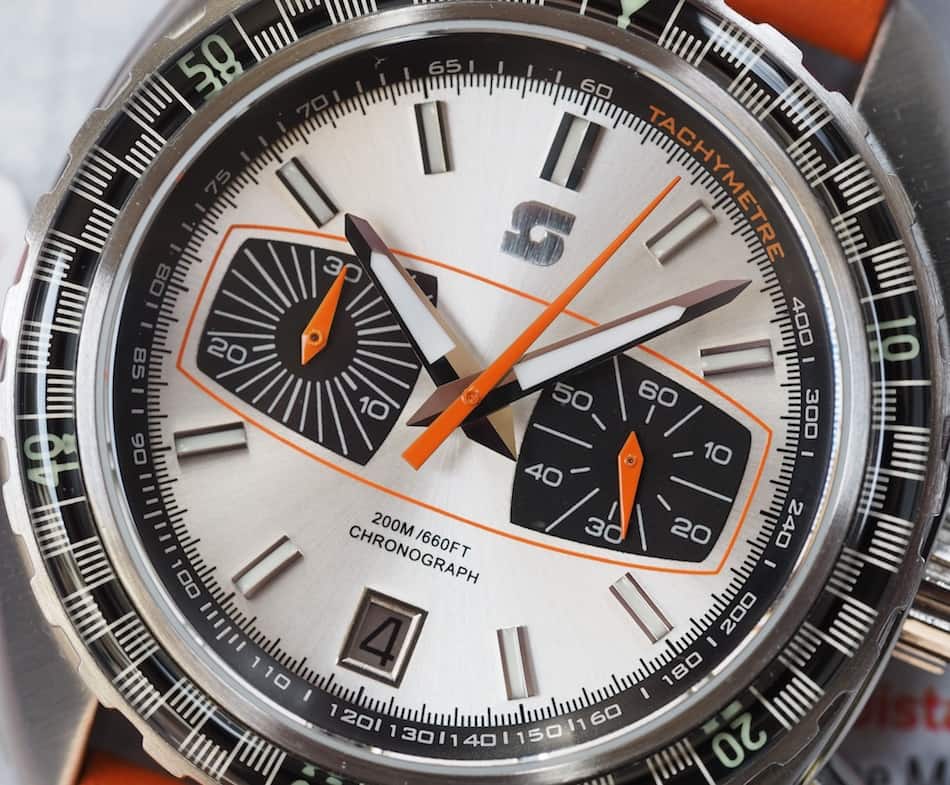 The dial itself on the Straton Syncro is adorned with a surprising amount of detail. If a date is chosen, the window receives a bezel. Hour indices are applied and lumed the company logo, an “S”, is also brushed and applied. Hands are well finished as well and I saw no “orange peel” from the paint used on the chronograph hands.  Additionally, you can see a tachymeter inner bezel that helps complete the look. 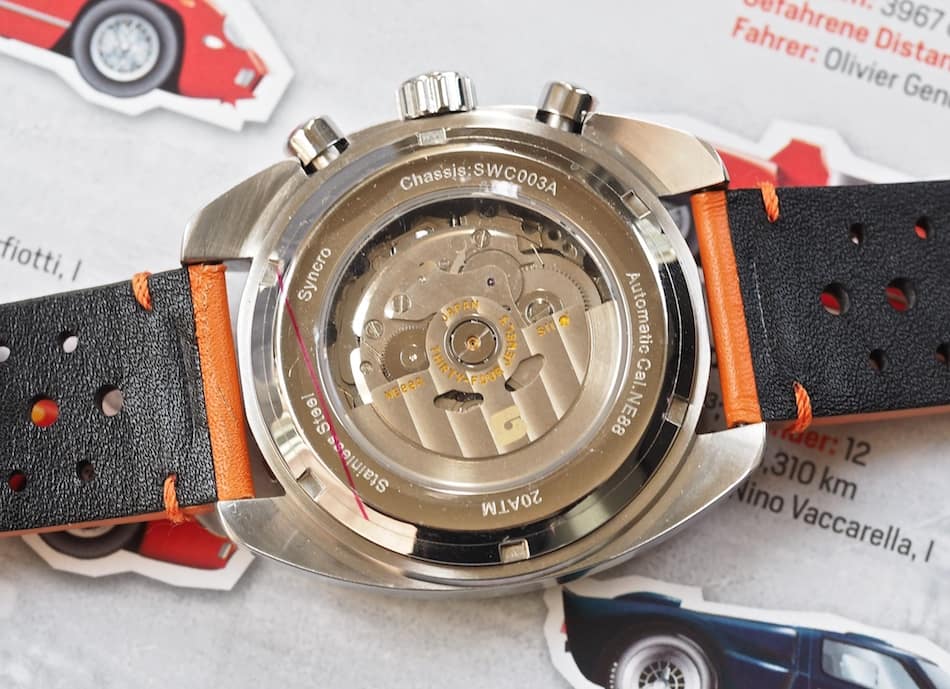 Movement wise, there’s serious quality chosen for the Straton Syncro and I say that because both come from Seiko. First, and available in a first production run of 200 pieces, is the automatic column-wheel chronograph movement, the NE88. This is a 34 jewel movement that runs at 28,800 bph with a 45 hour power reserve and I’ve found it to be a great timekeeper. It can be hand wound and is nicely finished and viewable through a sapphire case back. The second available movement is Seiko’s VK64 meca-quartz chronograph movement. This is a popular movement for micro-branded chronographs as it’s affordable and does a great job of impersonating a true mechanical watch with its gliding chronograph hand. Both movements can be ordered with or without date window and in either sized case. 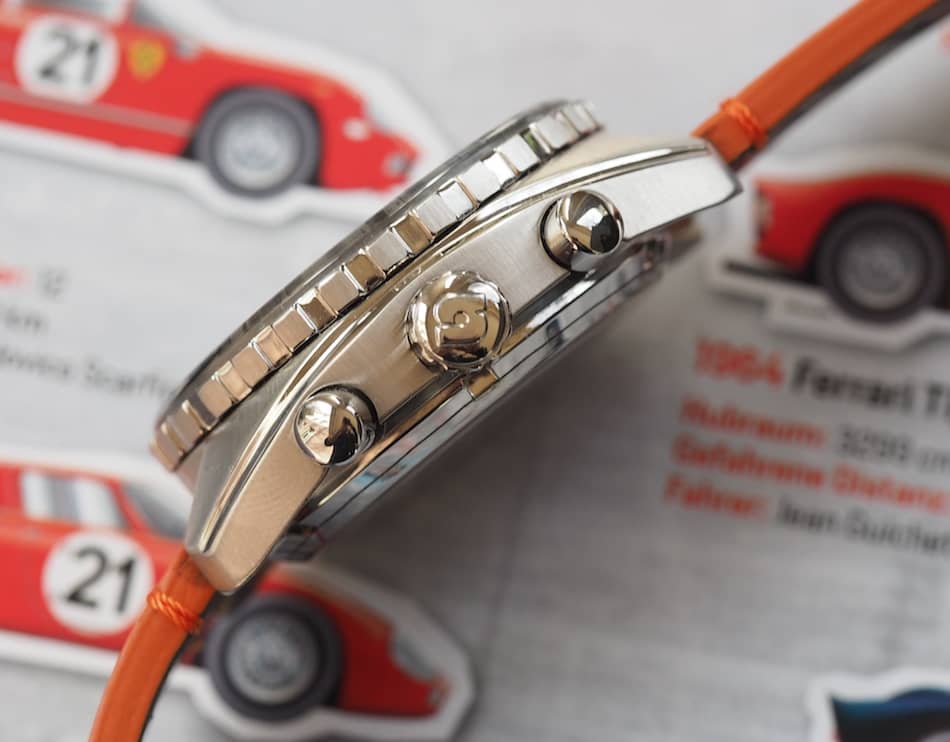 Regarding the cases on the Straton Syncro, both are fitted with screw down crowns, sapphire crystals and 200 meters of water resistance. I found the case finishing to be of high quality and while the edges or purposely soft, there’s a nice consistent transition from matte to polished finishing. 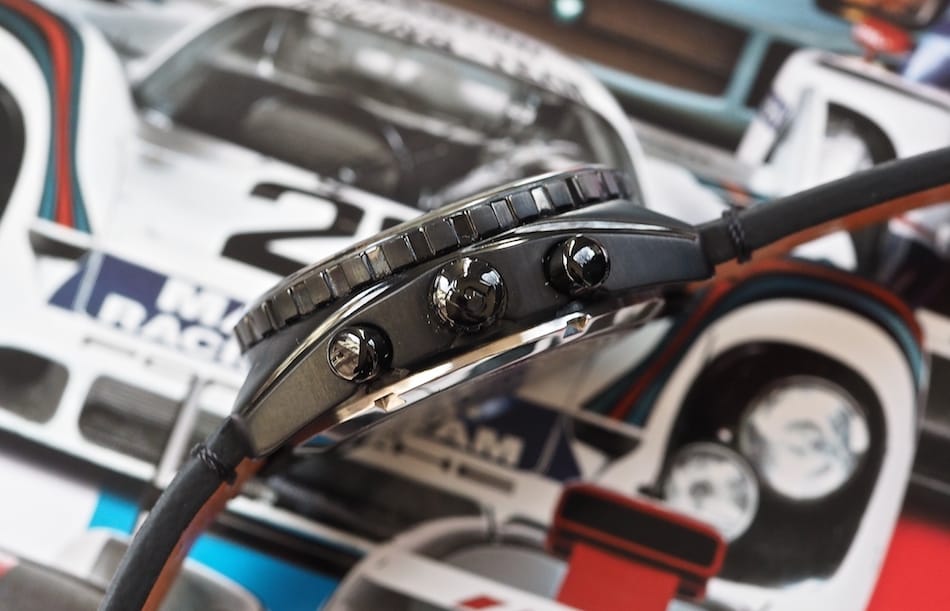 I tend to be more of a fan of the natural stainless case, but the DLC coating is attractive and when we come to the discussion on pricing, I think you’ll agree that it’s a low risk opportunity if you’ve ever wanted to trial a black-cased watch. 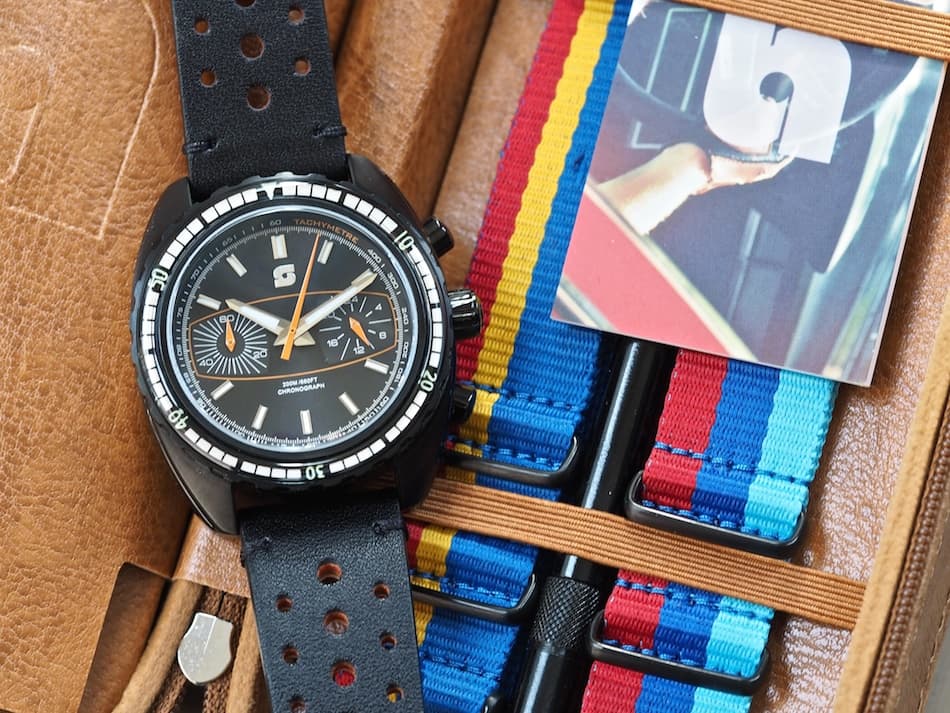 The Straton Syncro is Affordable

The way the ordering works for the Straton Syncro is fairly simple. One chooses a combination of case size, movement, dial style, date or no date and either a leather strap (one of two styles) or mesh bracelet. Then, within the cool padded zipper case, two more NATO straps (11 to choose from) are chosen free of charge and delivered with the instructions and a strap tool. I won’t get into all the special pre-funding offers, but there are loads and as in most cases, the more you buy, the better the deal. 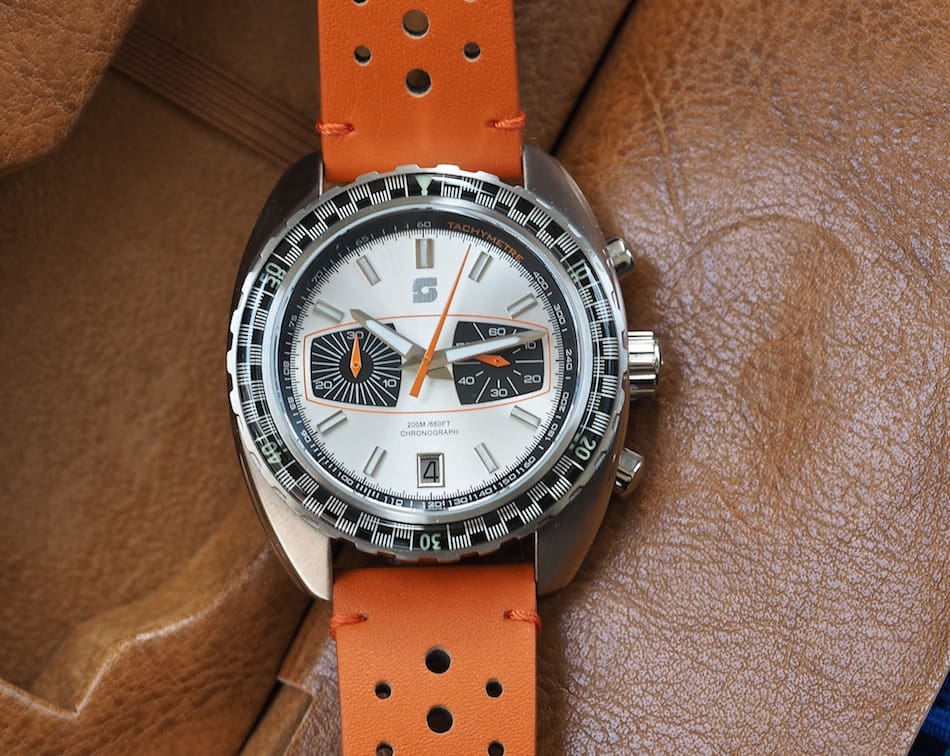 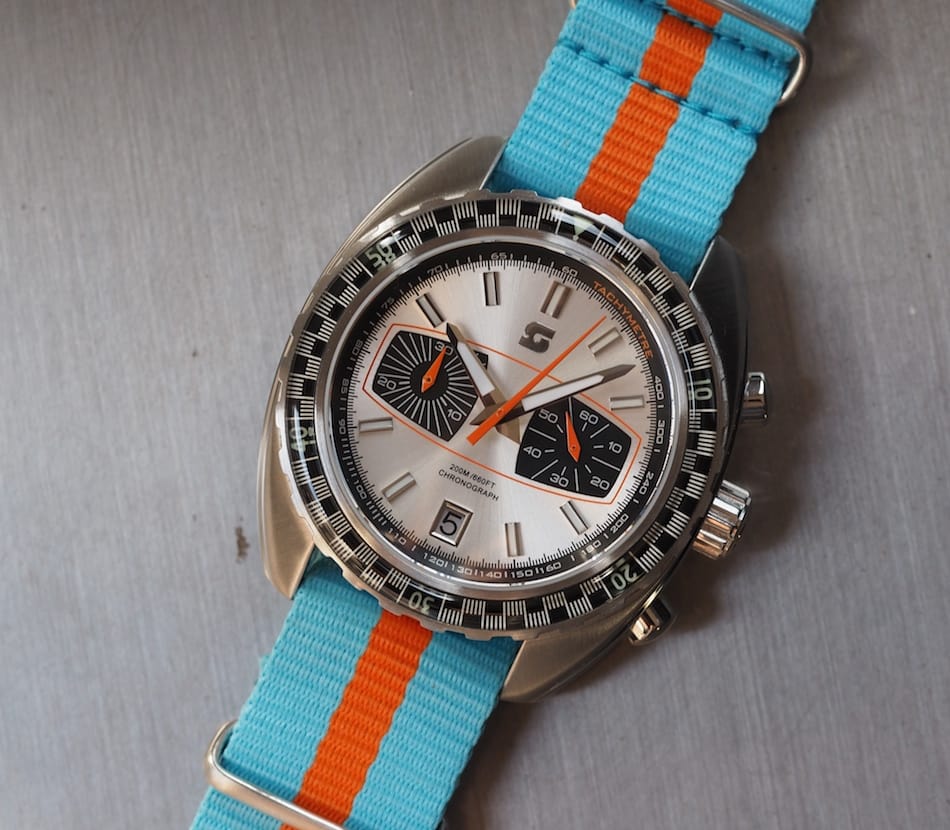 The Stainless Syncro is a Favorite

As mentioned I received two Straton Syncro watches in for test. Both impressed me, but naturally, the automatic stainless version impressed me most. First, and I think you’ll concur; this version jumps off the page. The silver dial is really, really nice. 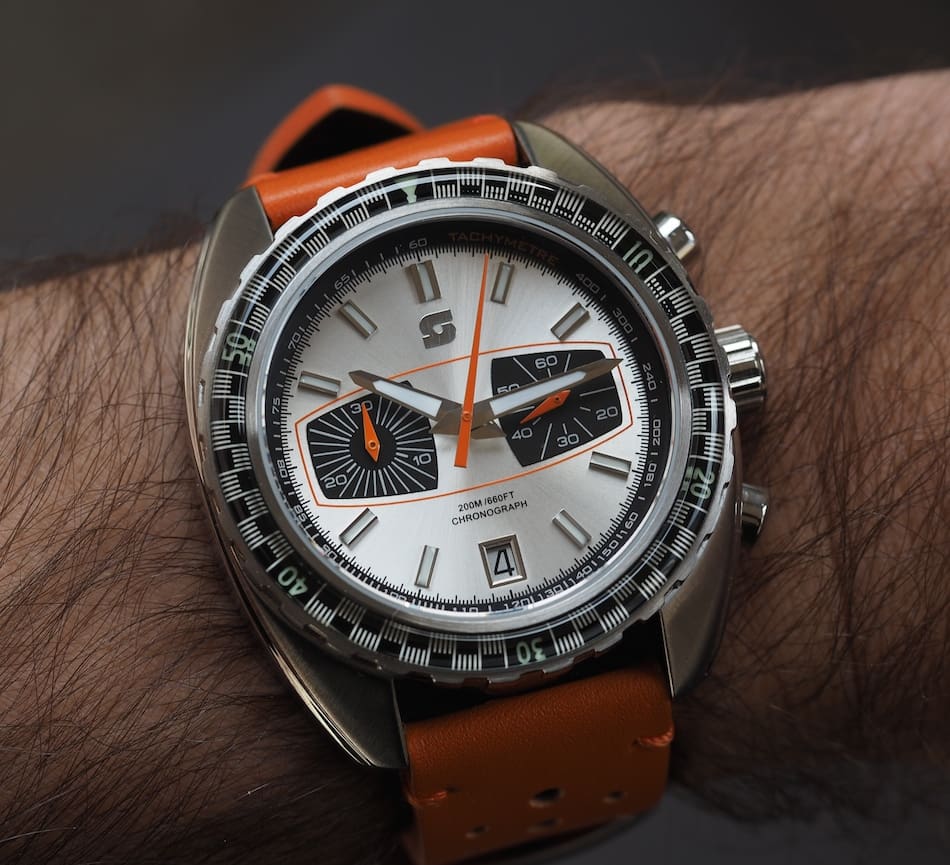 It’s an absolute dream to photograph and looks formidable on the wrist at 44mm. I didn’t even mind the date window and would likely go that direction if I were to order. It totally captures the 70’s chronograph vibe, but it’s nice to know you’re wearing something affordable and reliable in the sense of it being a modern watch. 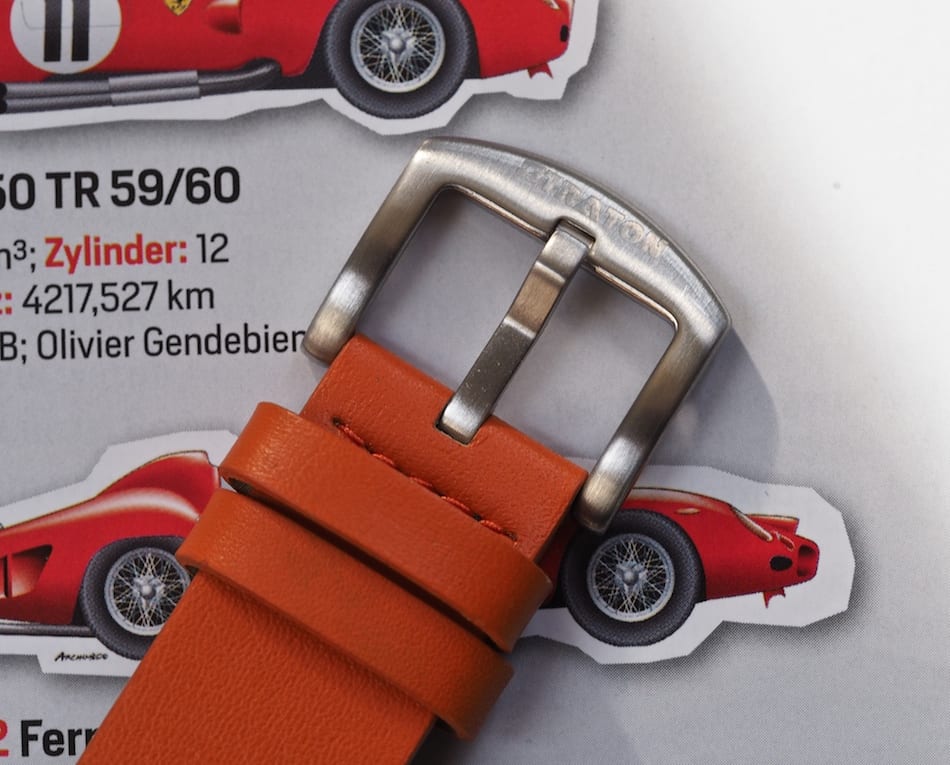 Plus, the little details such as the rally-inspired strap with signed buckle and the well-finished movement make it feel like a whole of lot of value for the money. 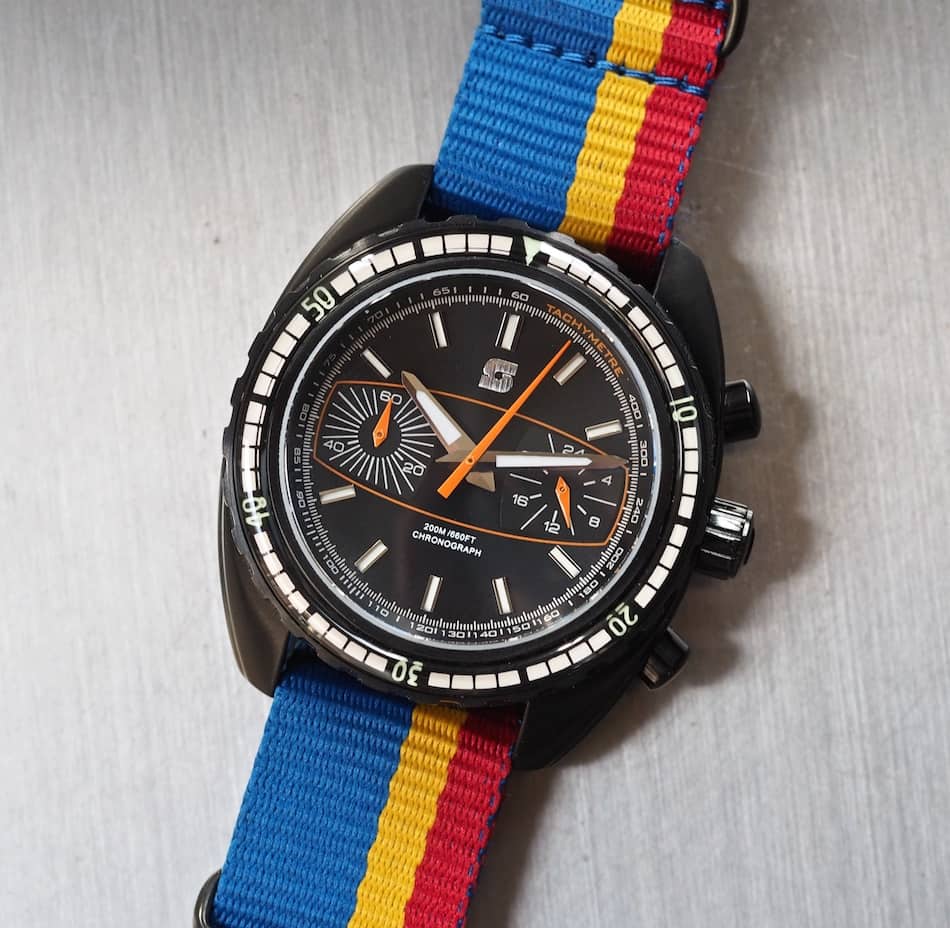 Regarding the second Straton Syncro, I received, I liked it but it’s an odd situation where I actually think bigger is better because it’s bold. Yes, I liked the 44mm case size better, but perhaps the black coating made the watch seem smaller than reality. 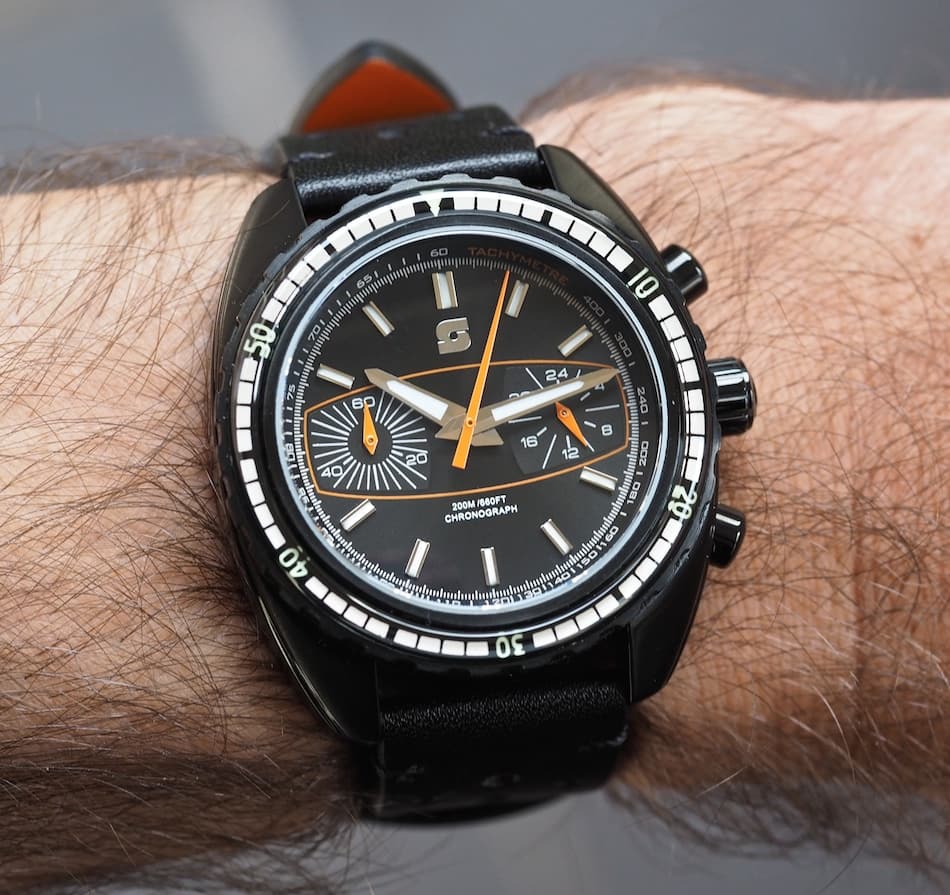 Still, it was a good-looking watch and I think the brightly striped retro NATO straps helped to augment the entire look. The meca-quartz is really a nice movement and while I favor mechanicals, it’s more than simply a battery-operated chronograph. 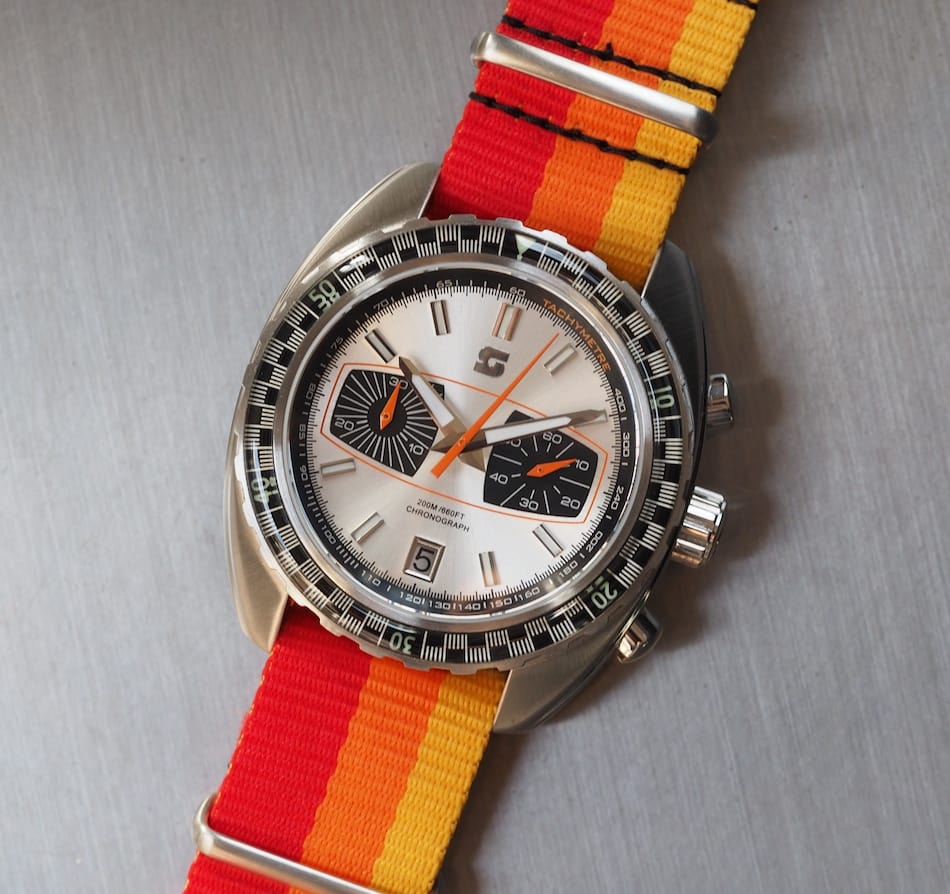 Let’s exorcise an elephant in the room and that has to do with country of origin. These watches are manufactured in China – period. Normally I’d follow that up with loads of “buts” and “howevers” but I don’t think it’s necessary. Look on the label of most of your luxury goods – whether they be electronics or clothing or even parts within your luxury car and I think you’ll see the word “China” everywhere. 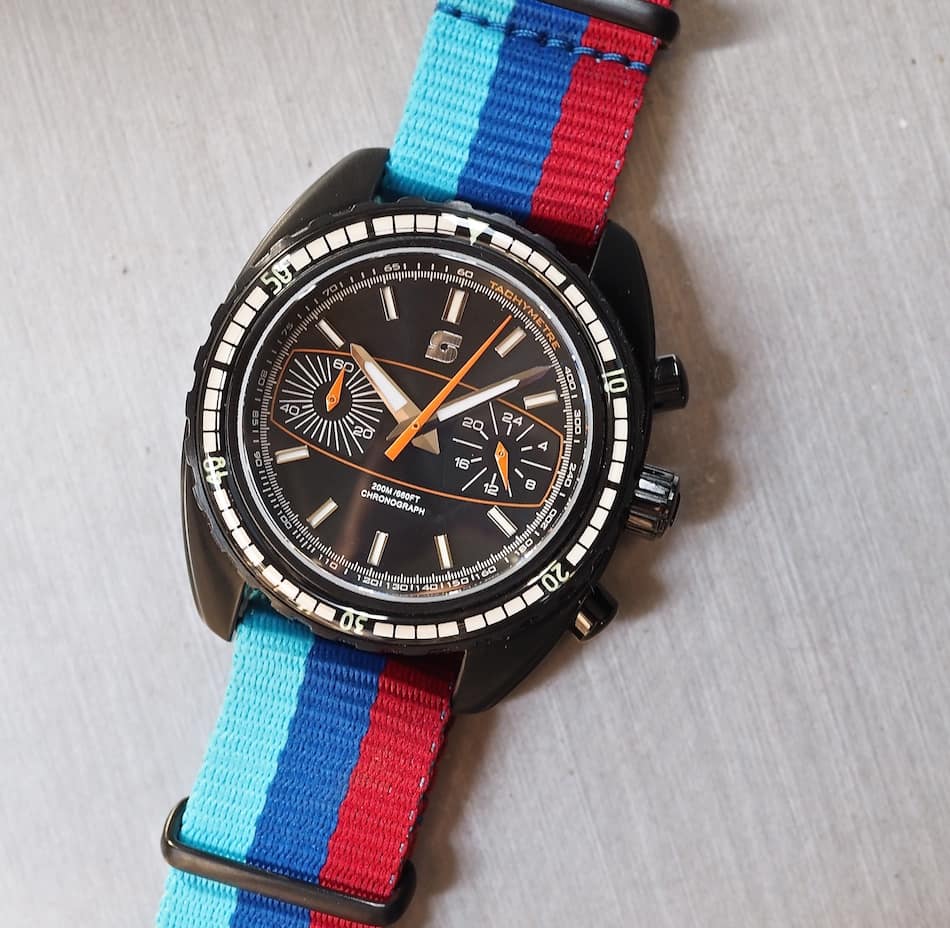 Furthermore, we know that the Swiss watch companies have increasingly made use of China’s less expensive workforce for the production of parts. In any case, China is for real and for customizable watches such as the Straton Syncro (and so many other micro brands), it’s the perfect place for affordable quick-turn programs. 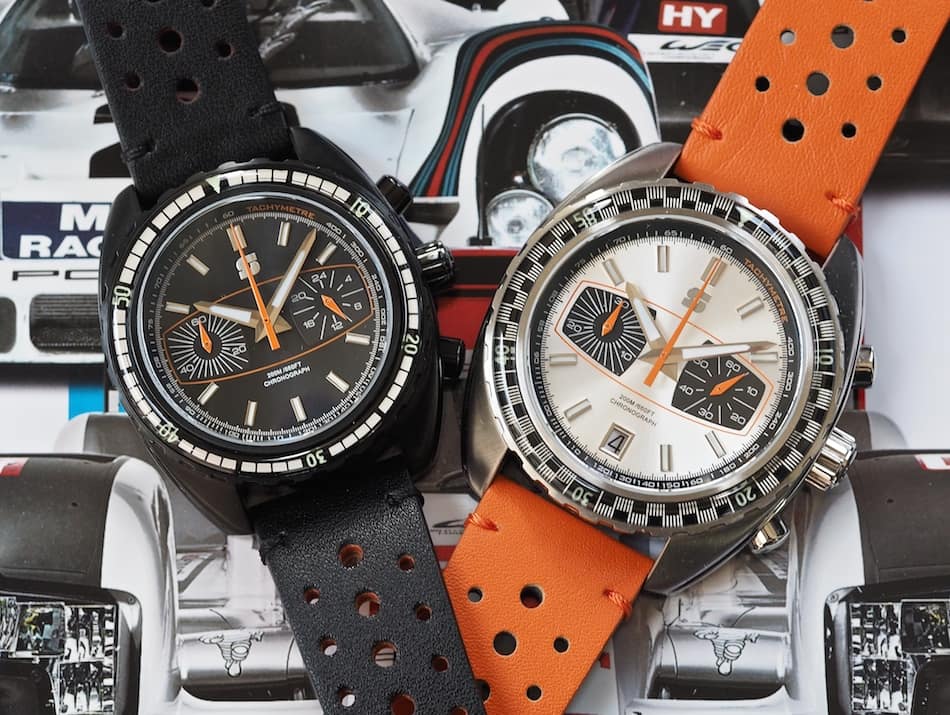 The Straton Syncro delivers in August 2017 and if a funding total of 200,000 CHF is reached, early funders will receive another leather strap in the package. With a few weeks left, this seems probable. These were fun watches to spend time with and, as mentioned, well thought out and produced. Go take a look!

More information on Straton Watch Company can be found here.

Hot Topics
Introducing: The New Seamaster Professional 300M 60 Years Of Bond — With A Special Animated Case Back
105 comments
Are You Still After An Omega × Swatch MoonSwatch?
84 comments
It’s Time To Invest In A Dress Watch — Our Picks From Breguet, Omega, Grand Seiko, And More
72 comments
The Rolex Waitlist Conundrum — How Much Will The Price Of Your Watch Increase While You Wait?
50 comments
The Best Omega Speedmaster Watches Of 2022
40 comments
Popular
Omega Speedmaster Hodinkee 10th Anniversary Limited Edition
Robert-Jan Broer
7
The Omega Seamaster Diver 300M Returns – On The Wrist Of Daniel Craig
Paul Dezentjé
17
#TBT Top Vintage Seiko Divers – They’re All Here!
Michael Stockton
16