In today’s installment of #TBT, we’ll take a closer look at a watch that is still technically on the market – although buying it is a bit difficult outside of Germany – the Sinn Chronograph Tachymeter. This is a watch that gathers near universal praise whenever I post a picture on Instagram, but the plaudits are normally followed by questions of “what is that” and “where can I buy one”? Have no fear, Fratello Watches is here to shed some light on a watch that Robert-Jan previewed all the way back in late Summer 2012 when the watch debuted. Personally speaking, this article is a nice opportunity to share info on a watch that I actually find to be one of Sinn’s best – it’s just a shame that it’s so obscure. 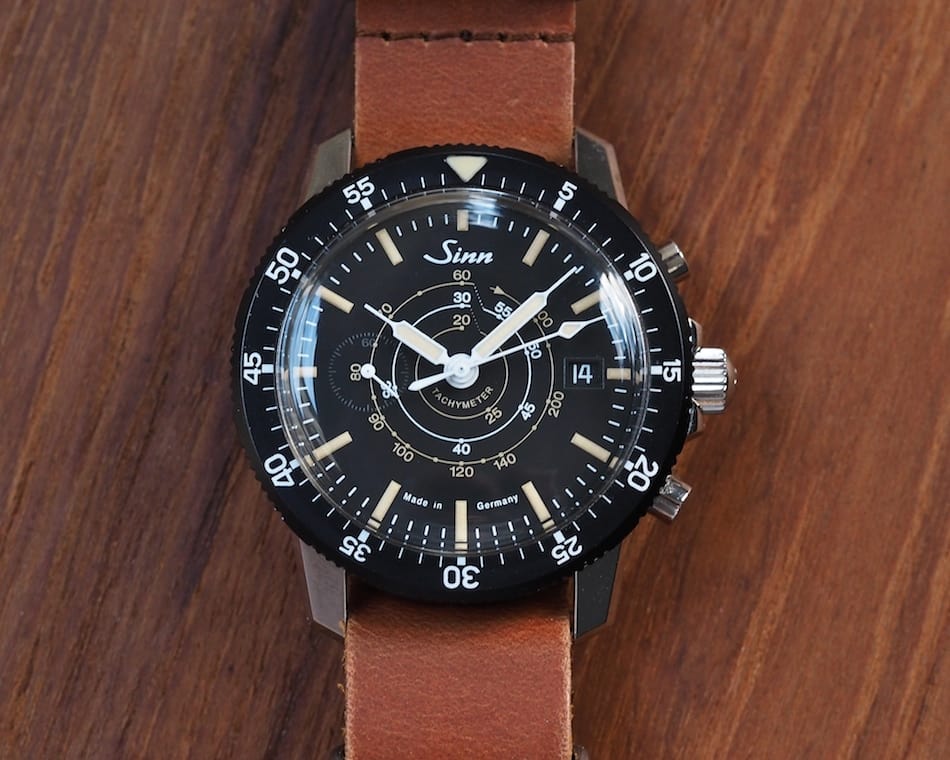 Back to 2012 for the Sinn Chronograph Tachymeter

Traveling back roughly 5 years ago, Frankfurt-based watchmaker Sinn Spezialuhren collaborated with near-Dortmund-based retailer Manufaktum to create and market the Sinn Chronograph Tachymeter. This wasn’t a very strange collaboration in itself as the retailer had collaborated with others – including Sinn – previously and continues to do so. Manufaktum, for those unfamiliar (and who could blame you if you live outside of Germany), reminds me of the old Brookstone stores in the USA mixed in with Hammacher Schlemmer. They carry all kinds of high quality odds and ends – everything from gardening implements to specialty liquors and, oh yes, watches. And so it was that during November of 2012 that I stepped into the shop in Frankfurt and came upon today’s watch and I was taken by it from the first; its intsrument-like looks and great color scheme sold me right away. But the odd thing, and this is why the watch is still technically available today, is that it seems neither side (Sinn nor Manufaktum) heavily marketed the “Tachy Chrono”. So, we’ve ended up with a watch that people pine for, but don’t know the origin or how to obtain it. 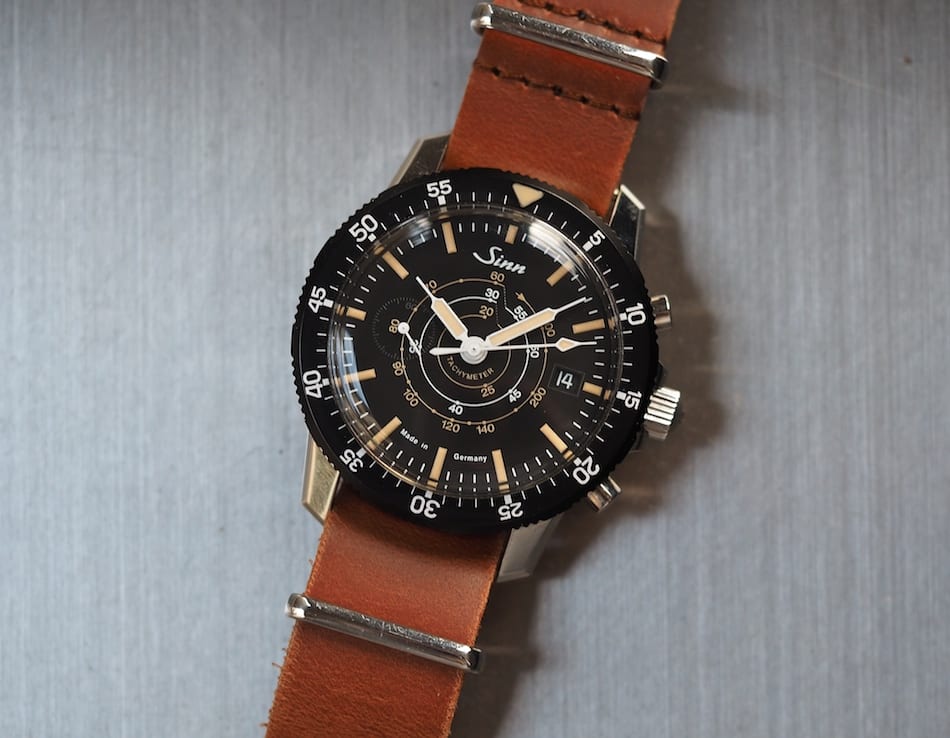 I’d been in Frankfurt for roughly a year by this time and was looking for a Sinn to help mark my time of living in the city – a perfect keepsake. As one who likes to acquire different types of things, the limited edition (I originally thought 100 pieces and now it seems 200) Sinn Chronograph Tachymeter sounded like the right item. But, forgetting the limited edition argument, the looks just flat out did it for me. 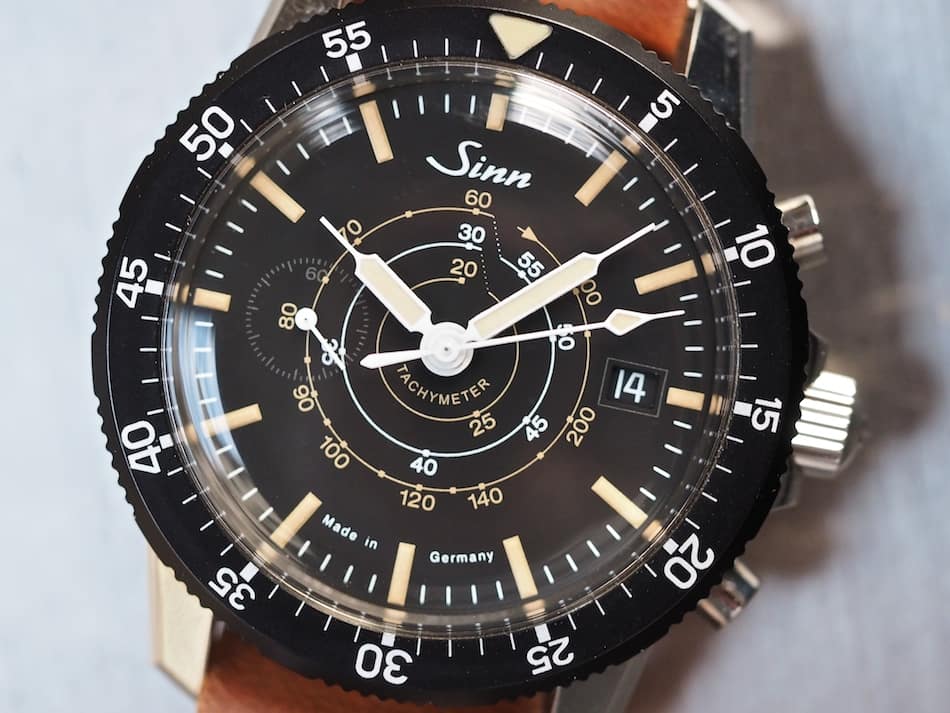 A Chronograph Without Registers

Make no bones about it, the Sinn Chronograph Tachymeter is a weird style of chrono. The watch is technically part of Sinn’s popular 103-series of Instrument Chronographs and, true to form, is powered by the ETA 7750. Here, though, you’ll note that the dial is oddly sans any sub registers aside from a small running seconds needle at 9:00. It does, however, contain a centrally mounted chronograph hand and two pushers in the normal location. So, what is this watch? Simply put, the central chronograph hand can be used in conjunction with the spiral-shaped tachymeter scale on the dial to read average speed in kilometers per hour. 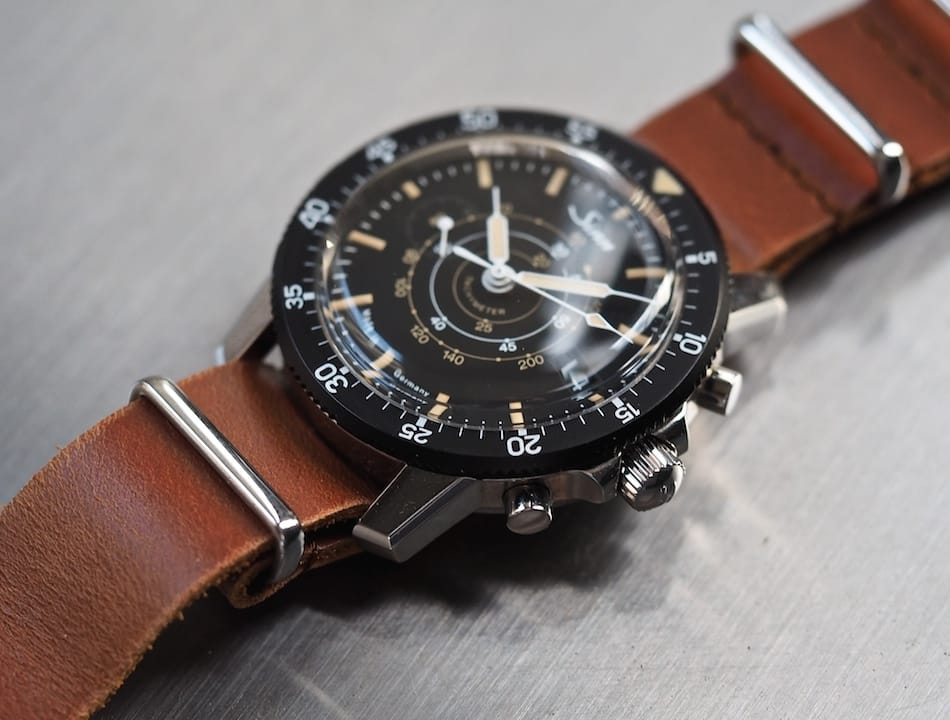 Other features abound on the Sinn Chronograph Tachymeter such as a decidedly retro acrylic domed crystal, aged looking superluminova, and a polished stainless 103 case that is nearly identical to a Heuer Autavia 2446C or Wakmann “Big Boy”. Guards surround the signed crown and, in order to aid the listed 200m of water resistance, is a screw-down. The matte-finished rotating bezel is apt for diving. 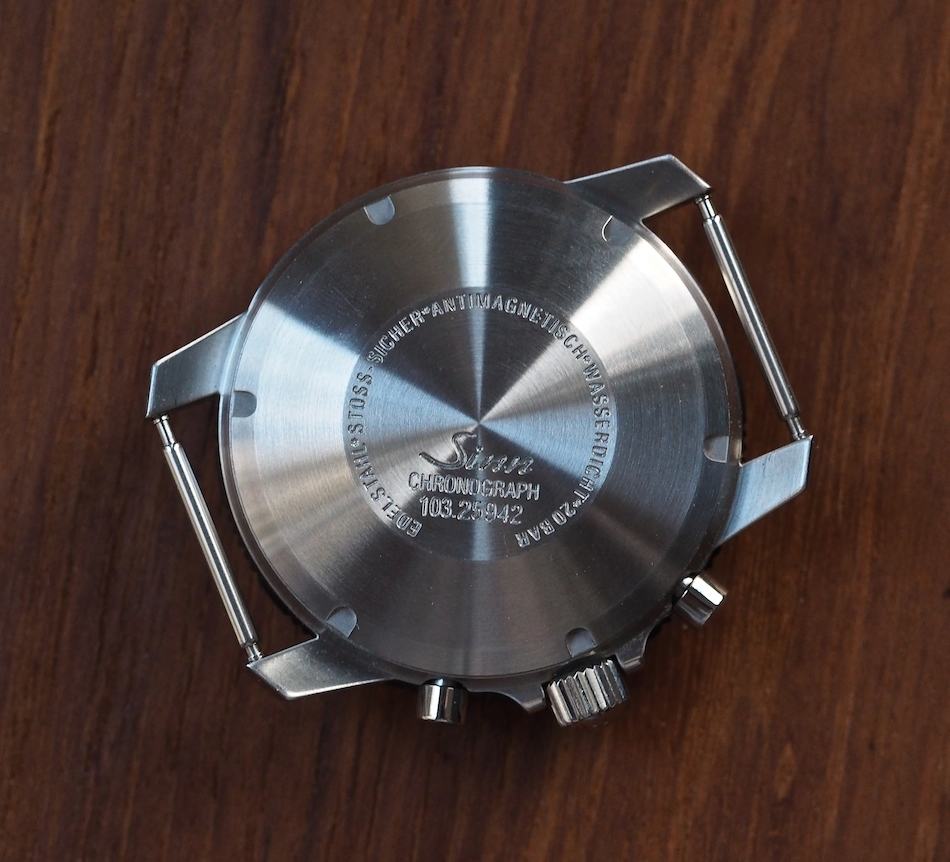 Specs aside, let’s return to the looks of the Sinn Chronograph Tachymeter because, if we’re honest, the functionality of the piece is a bit esoteric. Retro, as a style, has been popular for some time now with so many brands having joined the movement. This Sinn, though, for me, hits the mark because it’s at once classic and inventive at the same time. It doesn’t ape a prior Sinn watch, but it does contain many heritage-inspired details. Syringe-shaped hands, that crystal again, and applied lume indices come together with a very well laid out dial. The classic “Sinn” signature is also well sized. I don’t even find the date window intrusive! 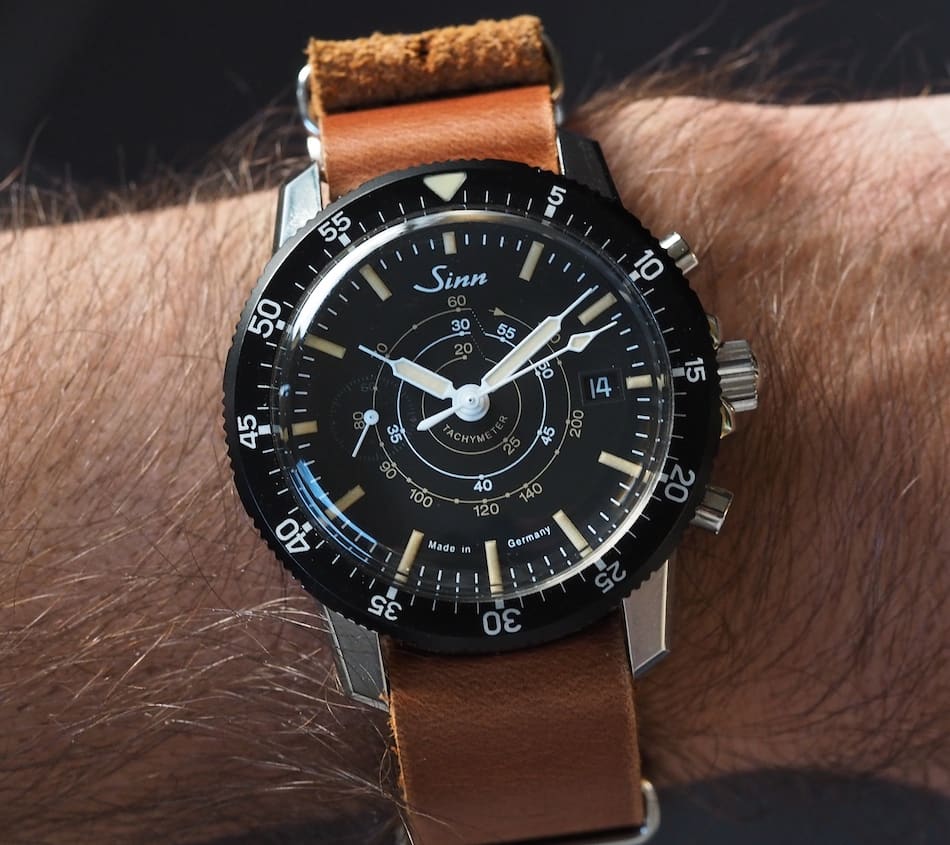 Originally, the Sinn Chronograph Tachymeter was shipped with a brown leather strap containing large holes (rally style) and a signed pin buckle. I found it a little stiff and with too much padding, so I’ve generally worn it on a leather or fabric NATO strap. The color of the lume on the watch makes it pair well with anything earth-toned and gives it a really warm look. At 41mm, it’s also commanding, but not overbearing. 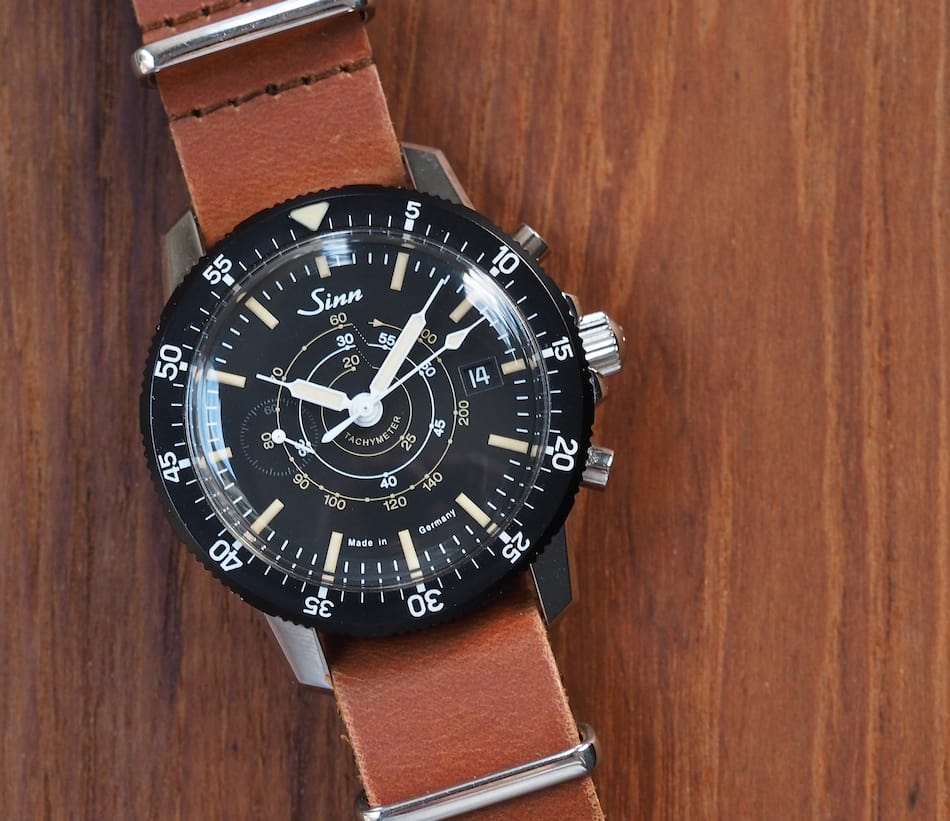 You Can Still Buy the Sinn Chronograph Tachymeter

I mentioned that the Sinn Chronograph Tachymeter is still available on the Manufaktum website. You can even read the description in German or English! However, ordering this watch outside of a EU country is a bit difficult because you’ll likely have to deal with customs and the site’s shipping costs are less than clear. The good news is that Manufaktum now accepts credit cards – I recall reading 2-3 years ago that only wire transfers were accepted and this is not something that the rest of the world outside of Europe commonly does. When I purchased the Sinn, the price was somewhere south of 1200 Euros, but this was also when the Euro/Dollar exchange rate was far different. Looking today, the Tachy Chrono lists for 1490 Euros (within Germany) and, to me, that makes it an absolute steal for such a well-built and attractive watch. When you look at what is available on the market for this price, it’s tough to find a new chronograph boasting this much character and quality.

Yes, I am aware that #TBT is really meant to focus on vintage watches, but a look at a vintage-inspired piece is worthwhile at times. The Sinn Chronograph Tachymeter, in some instances, fills a niche for me when I want something modern and robust but entirely old looking – think of travel where it’s likely to be raining or you stand a good chance of smacking a watch into an airplane armrest and you get the idea.

Hot Topics
Everyone Needs At Least One Of These Iconic Dress Watches In Their Collection — Top Picks From Cartier, Rolex, Grand Seiko, And More
115 comments
The Omega × Swatch Speedmaster MoonSwatch Six Months On — Is The Hype Still Alive?
85 comments
Introducing: The New Omega Speedmaster X-33 Marstimer
80 comments
Not Every Watch Enthusiast Needs To Own A Rolex
70 comments
The Best Of The Bunch — Meet The New Omega Speedmaster ’57 In Blue
63 comments
Popular
A Question From A Reader: “Which Modern Speedmaster Is Closest To The Original Moonwatch?”
Robert-Jan Broer
13
Rolex Submariner – Historical Overview Of A Diving Legend
Robert-Jan Broer
22
(From The Archives) Shut Up & Read The Truth About Cartier Watches
George Cramer
21