Today on #TBT we’ll take a look at a Rolex that has “flown” below the radar for some time. It’s a watch with sporting intensions, but it’s not considered as a sports watch per se. Despite this, the Rolex 1625 Turn-o-Graph was actually issued to pilots in one of its earlier guises and features a “toolish” rotating bezel. Oh, and if you haven’t figured it out yet, this Rolex just happens to come in gold. 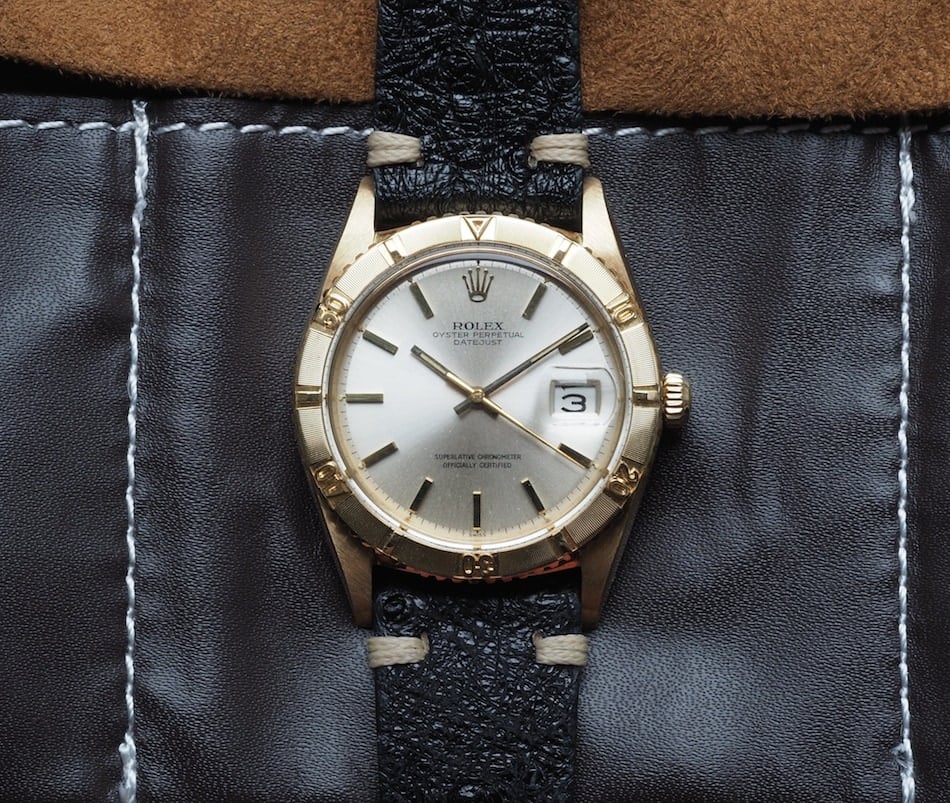 Let’s get into a little bit of history (for more, head here to this more extensive article). The original Turn-o-Graph was introduced in 1953 and the 6202 that appeared looked an awful lot like the Submariner that was still to come. It featured a black inlay rotating bezel and was offered with either a black or white honeycomb dial. With its introduction, it was actually the brand’s first production model with a rotating bezel. These models are scarce and rather expensive as they were only made for roughly a year until being replaced by the 6309 reference. Notably, the 6309 introduced a gold metal bezel, a trait that stayed with the model until it ceased production in 2011. At this time, it also became an official sub-model within the Datejust line. Also, during the 6309’s production, the watch became the official watch of the US Air Force Thunderbirds demonstration team and took with it the “Thunderbird” nickname that was often used in American Rolex advertising. In roughly 1959, though, the Rolex 1625 Turn-o-Graph was introduced and it was produced until 1977. 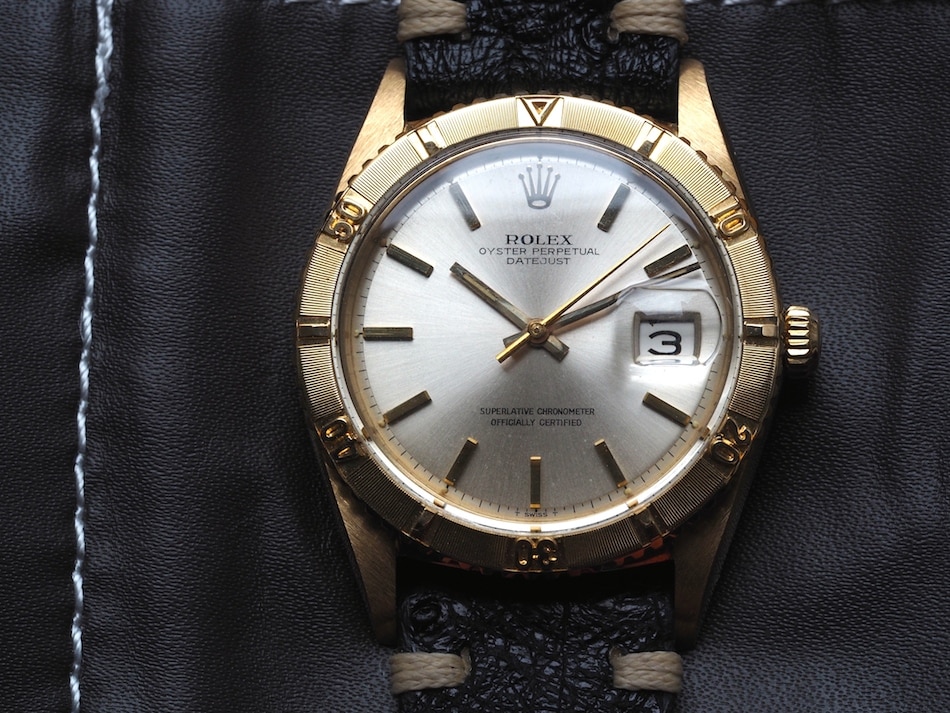 At first glance, it’s hard not to think of a Datejust when looking at the Rolex 1625 Turn-o-Graph. After all, the dressy dial, thin stick hands, applied rectangular markers and Cyclops over the date window are pure giveaways. Of course, the word “Datejust” on the dial seals the deal as well. It’s a funny thing because I’d wager that most think of a Datejust and the fluted bezel comes to mind. So, perhaps it’s this adder of the rotating bezel that comes off as a little incongruous to some because they’re so used to seeing something else in its place when paired with such a dial. That being said, the bezel is worth a closer look. 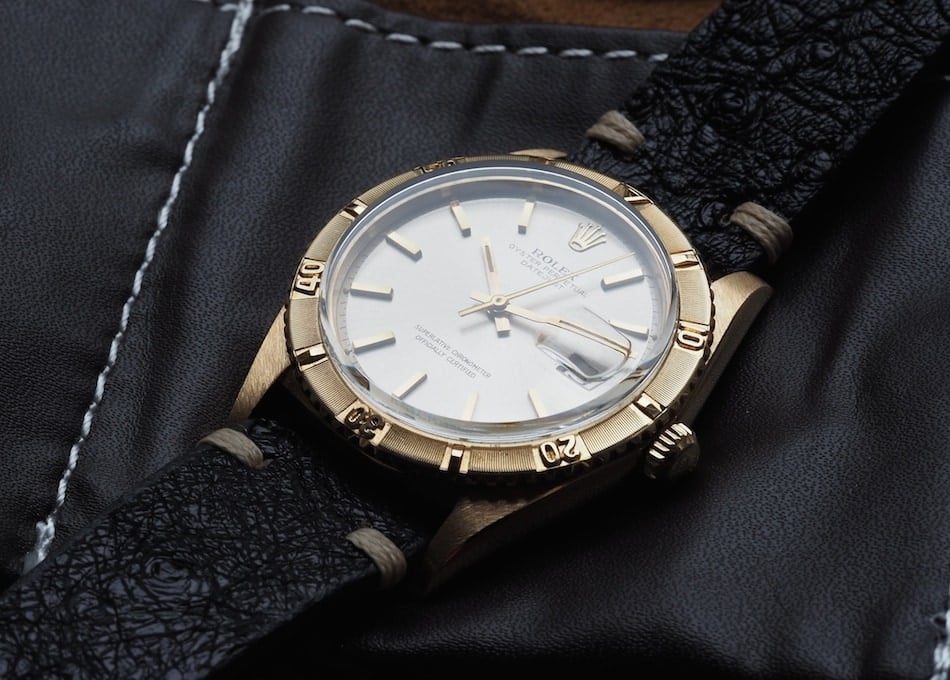 While this watch did become famous due to its association with a seriously skilled set of pilots, the Rolex 1625 Turn-o-Graph was apparently created for everyday professionals who may have wished to time something. That “something” could have been anything and not necessarily an activity involving life or death. Some may find that a bit boring, but when watch people sit down and honestly discuss how, or if, they use any watch functionality, a 60-minute bezel usually ranks amongst the top-most in terms of practicality. 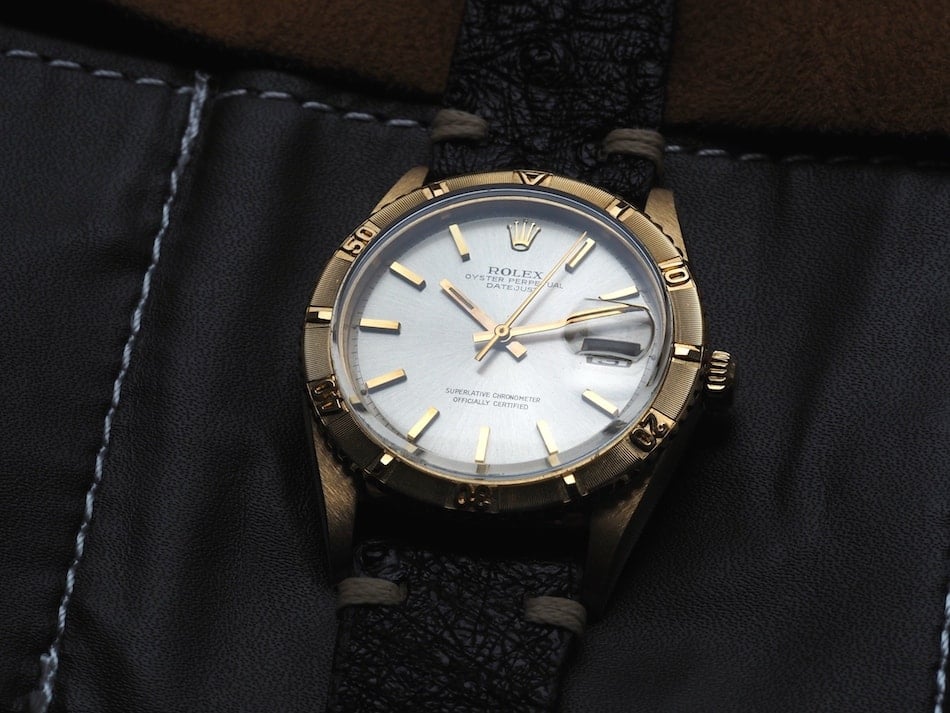 When viewed up close, it’s actually a gorgeous piece of finishing that’s often tainted by wear or, somewhat offputtingly, by dirt and grime. The whole thing is cast as one piece in 18-karat gold and, therefore, the numbers are in relief at the tens along with the stick markers at the 5’s. In between, there’s fine ridging that almost makes the whole thing so bright that it’s truly difficult for the eye to take in at once. Yes, there’s that much lighting contrast. Plus, all of these topographic features become collectors of daily detritus and make themselves accessible to dents and dings. This example, as you can see, is really in lovely shape. 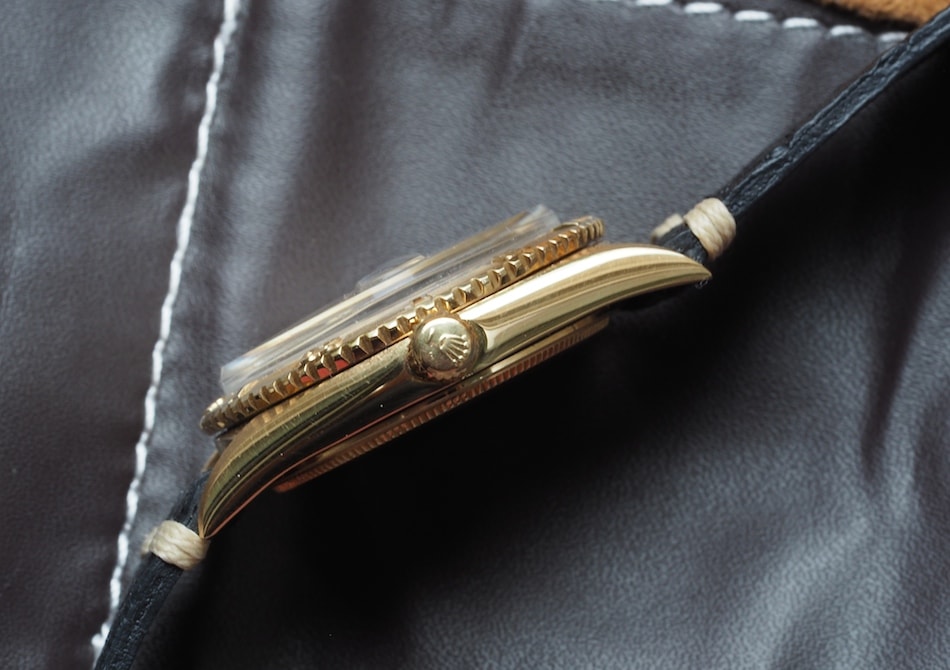 The bezel of the Rolex 1625 Turn-o-Graph is bi-directional and relies on a tight friction fit to keep it from turning without the use of force. With decent knurling around its edges, the bezel is ok to use, but the gold feels less edgy and tactile when compared to something like steel on a Submariner. Still, it does the job with little fuss. 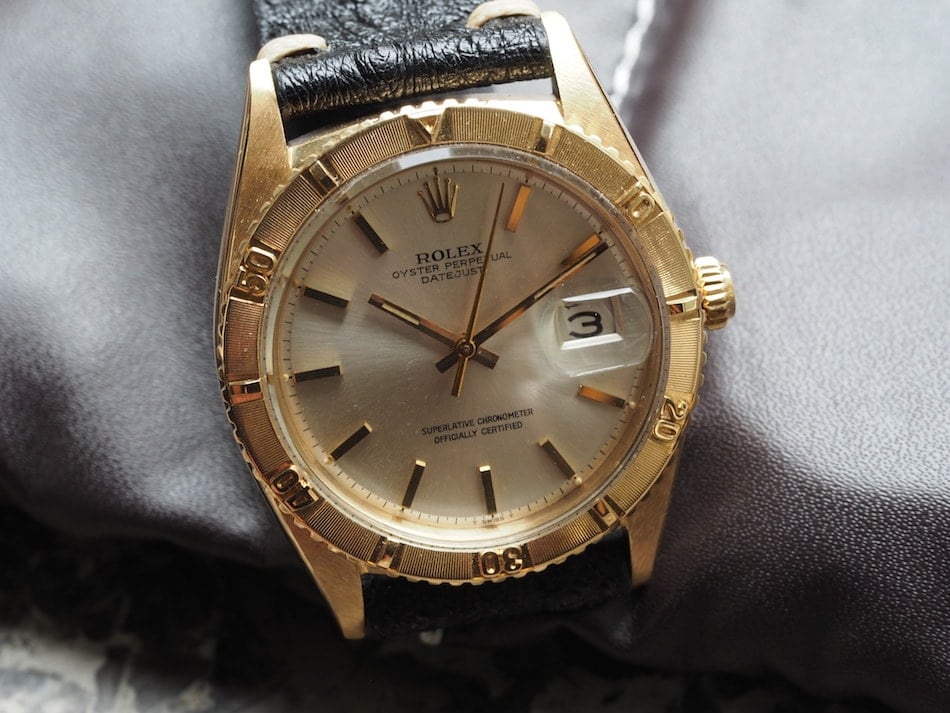 The partners in crime for measuring some event are the tritium filled hands. These are done in gold and with their thin slice of lume, match the dots of tritium found on the outside of each applied gold hour marker. This rayed silver dial is capped off with a lovely applied coronet at 12:00. 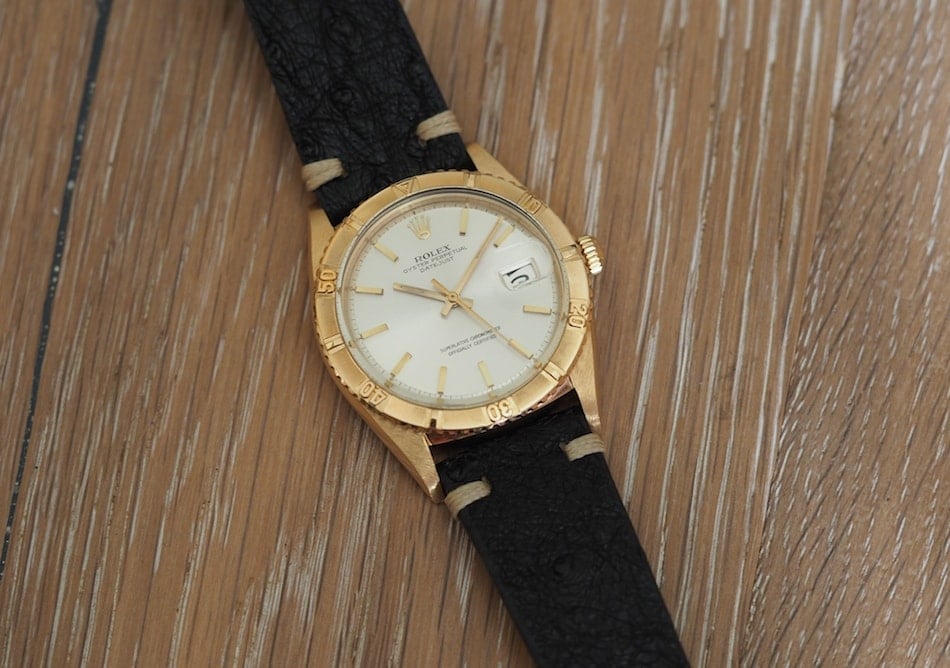 Case-wise, the Rolex 1625 Turn-o-Graph, once again, won’t be a stranger to anyone familiar with a Datejust. It comes in at a familiar 36mm in diameter, but the size is aided with decently lengthy lugs. This piece likely received a highly professional polishing at some point, but you can see the lovely matte finishing on the tops of the lugs and the beautiful polishing on its sides. And like many older yellow gold Rolex watches, this “ToG” has turned a brassy shade of yellow. You can also see that the lugs are still thick and even: this is sadly not a guarantee with gold. Take special note of that lovely hallmark of gold Rolex cases, the small area of reinforcement along the inside of the lugs where they meet the case. The crown of the 1625 is a screw-down along with the case back. The thick acrylic crystal is also a cool throwback that reminds us that we’re dealing with something a bit older. 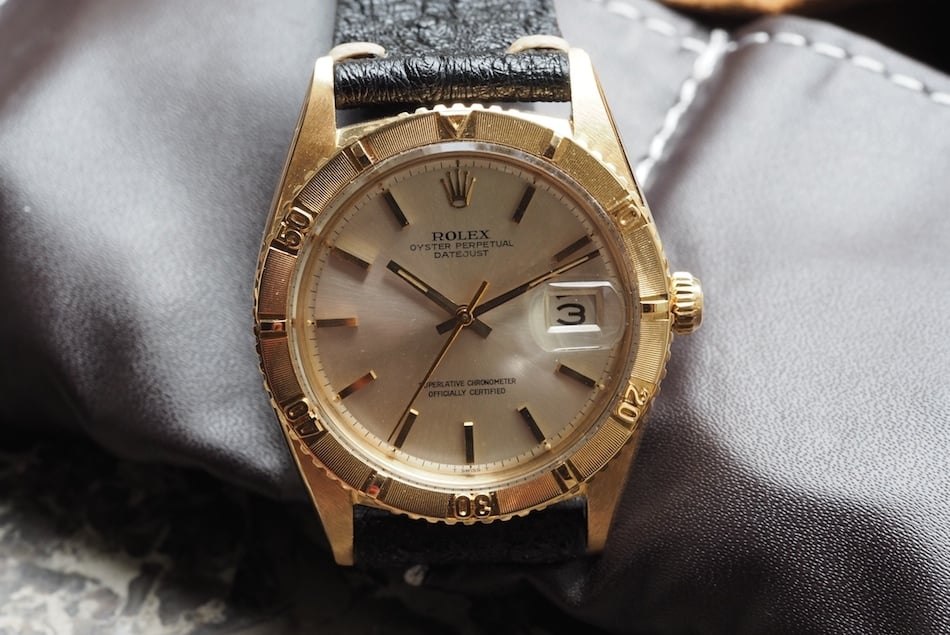 This Rolex 1625 Turn-o-Graph dates to roughly 1974 and contains a caliber 1570 automatic movement. From the dial, you can read that it’s chronometer certified. Unfortunately, it doesn’t contain a quick setting date, but it does hack. The 1570 runs at 19,800 bph and contains a power reserve of roughly 48 hours. Like most movements from this family, I find it hard to fault and rather bulletproof. 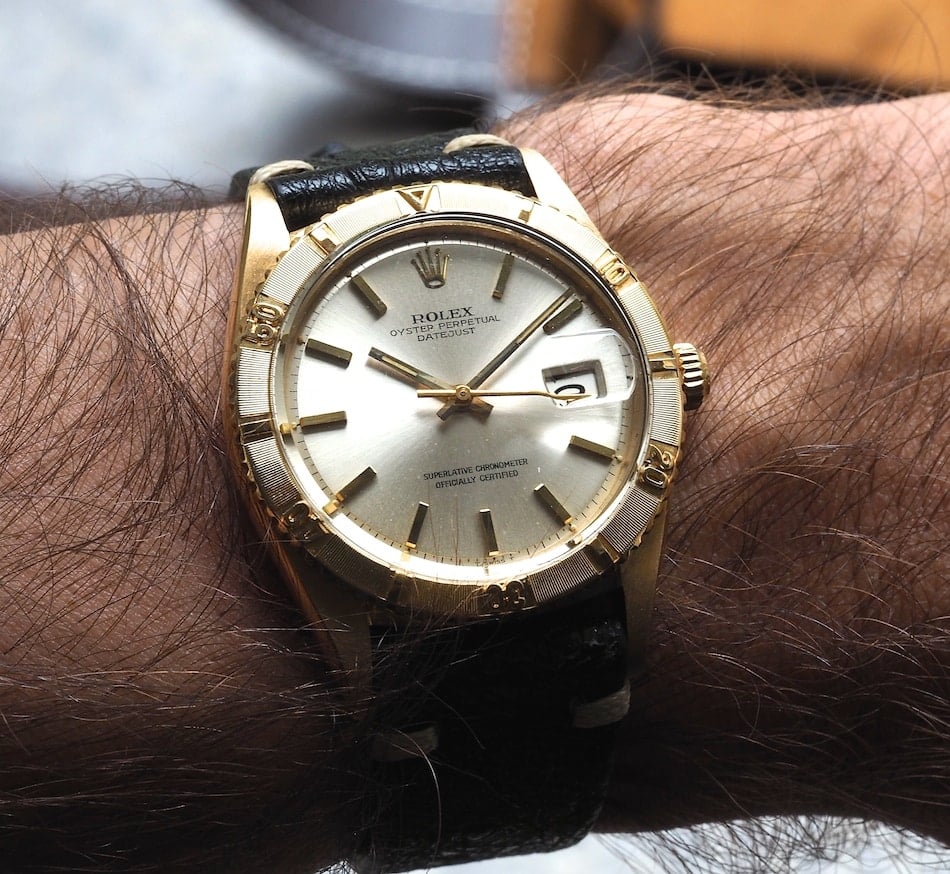 On the wrist, I find this watch fascinating. On the one hand, the Rolex 1625 Turn-o-Graph somewhat splashy, but it gives off an entirely different look versus the gold 16758 GMT that I own. It’s dressy, but somewhat sporty depending on the style of 20mm strap chosen for duty. I bought this watch from the Davidoff Brothers who found it at a watch show (I had put it on my wish list) and I’m rather happy with it. I’m slowly getting into vintage Datejusts and Day-Dates, but felt that a good Turn-o-Graph represented something quite different and maybe even a little undervalued.  Prices, by the way, for good gold pieces start somewhere in the mid $5,000’s and work their way up: condition is king. 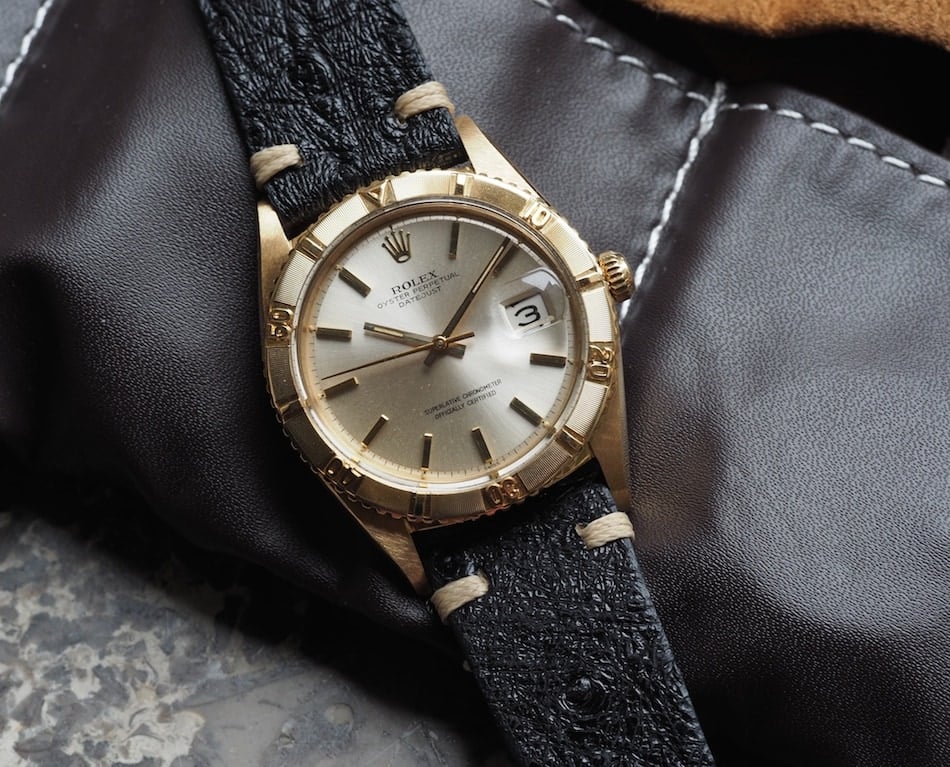 The Rolex 1625 Turn-o-Graph was available in a wide variety of dial colors, bi-color case and a steel version with white gold bezel. Therefore, there’s likely a variant to fit almost anyone’s desires. Why the ToG hasn’t found more fame is anyone’s guess. As mentioned, perhaps the fact that Rolex ended the line in 2011 hasn’t helped or perhaps most who wish for a turning bezel would rather have a GMT or a Sub. Whatever the reason, I’d consider it a rare bargain for collectors. Find one with a nicely preserved bezel and case and it’s hard to go wrong. And with Rolex, you just never know when a formerly unloved model all of the sudden becomes interesting again.