Welcome back to #TBT where, this week, we take a look at one of the more likeable watches I’ve picked up over the last year or so: the Wakmann Big Boy Chronograph. Now let’s get something straight, the term “Big Boy” was decided upon by @watchfred and I over a series of communications. Honestly, we had both acquired examples of these pieces over the last year or so and were at once excited by them and puzzled about what to call them. So, we came up with “Big Boy” because, well, the watches are, umm, big and they needed some sort of name other than “diver’s chronograph” or the like. There’s no real common reference for these watches and as I’ve used the word “these”, the term Big Boy actually refers to a family of pieces. So, yes, today’s #TBT will focus on a Wakmann-branded version of this watch, you’ll see and read proof that the term “Big Boy” refers to an alarming number of variants on the theme. 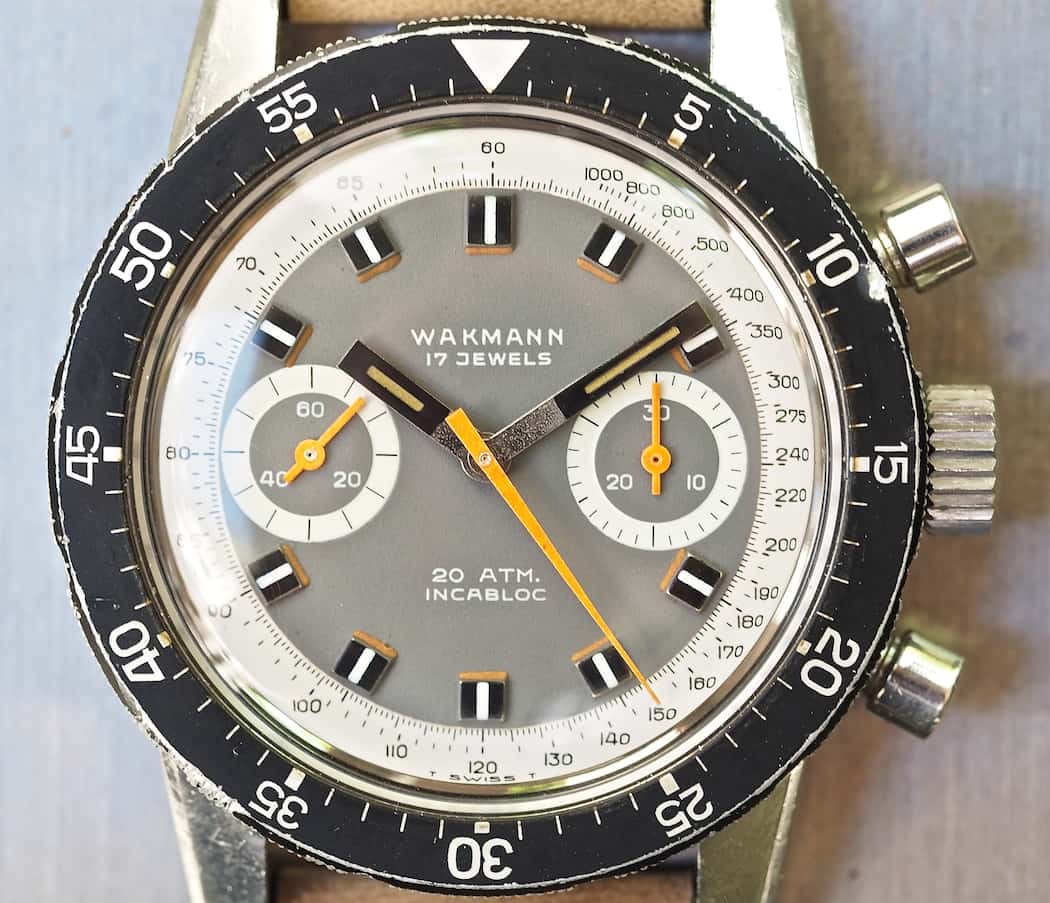 In my opinion, the Wakmann Big Boy makes a strong case as a visually more compelling watch versus the very similar Heuer Autavia 3646C

The Wakmann Big Boy – similar to another chronograph

The Wakmann Big Boy, at its core, is a diver’s chronograph. It’s equipped with a prominent, rotating diving bezel and, as stated on the case back, is water resistant to 600 feet. It comes in at roughly 40mm in stainless steel (we’ve seen chrome plated as well) and features convenient 20mm width lugs. When taking one’s eyes off of the interestingly colored dial, we’ll get to that later, and focusing on the case and bezel construction, it’s hard not to notice a similarity to another watch: the Heuer 2446C/3646C Autavia. Yes, the snap-back compressor cased 2446C/3646C has what appears to be the exact same case and coarsely ridged bezel setup as on the Big Boys. The only major difference on the Wakmann is that it uses a conventional screwback case. It’s interesting and in my opinion, makes the Wakmann – and its same case stablemates – all that more desirable. On the other hand, we really don’t know who made the Heuer cases (possibly EPSA, but they’re unsigned) or the Big Boy cases. Still, the design similarities strike me as more than coincidence. 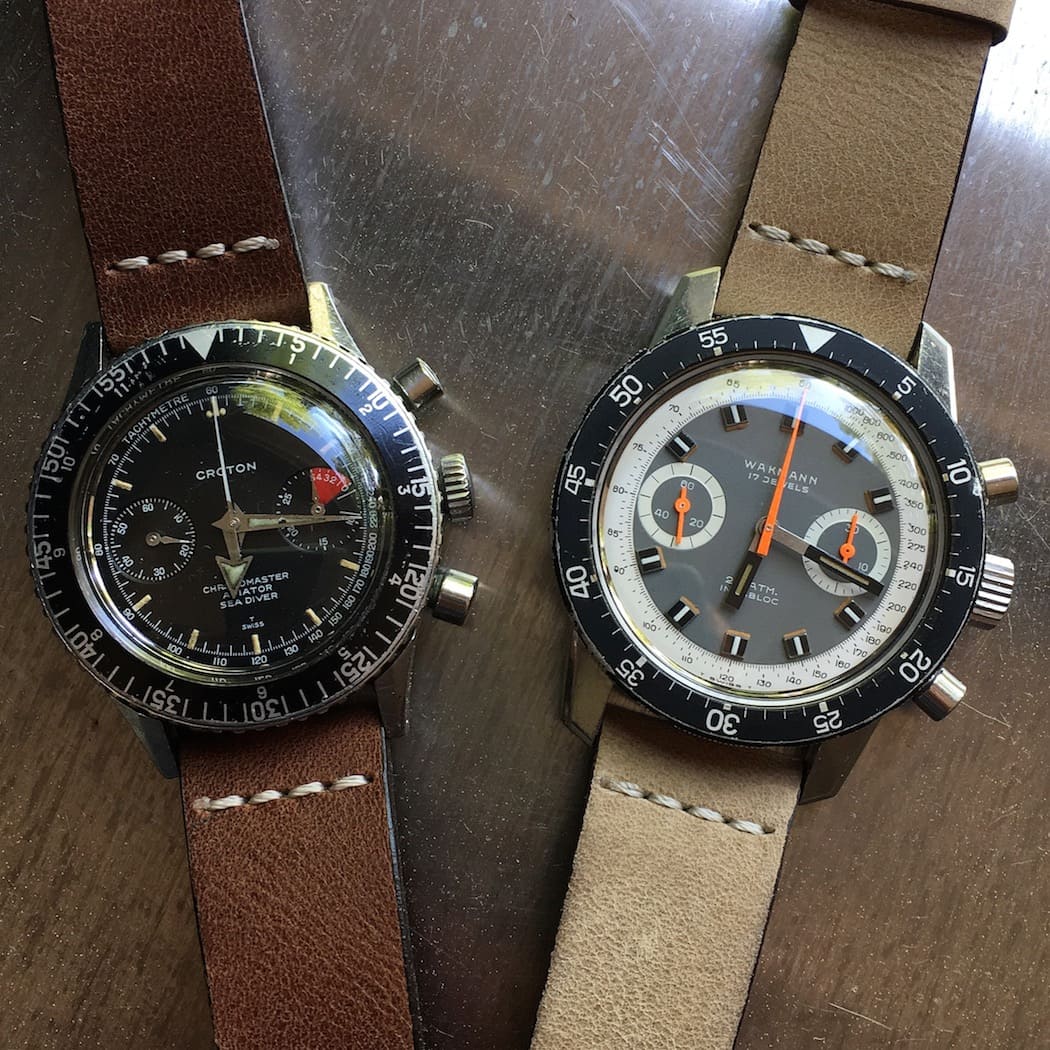 The Big Boys are found with loads of movements

We don’t quite know when the Wakmann Big Boy was produced but the best guess would point to the late 1960’s – early 1970’s. One thing we do know is that they were assembled by Gigandet as the markings are on the inside case backs. 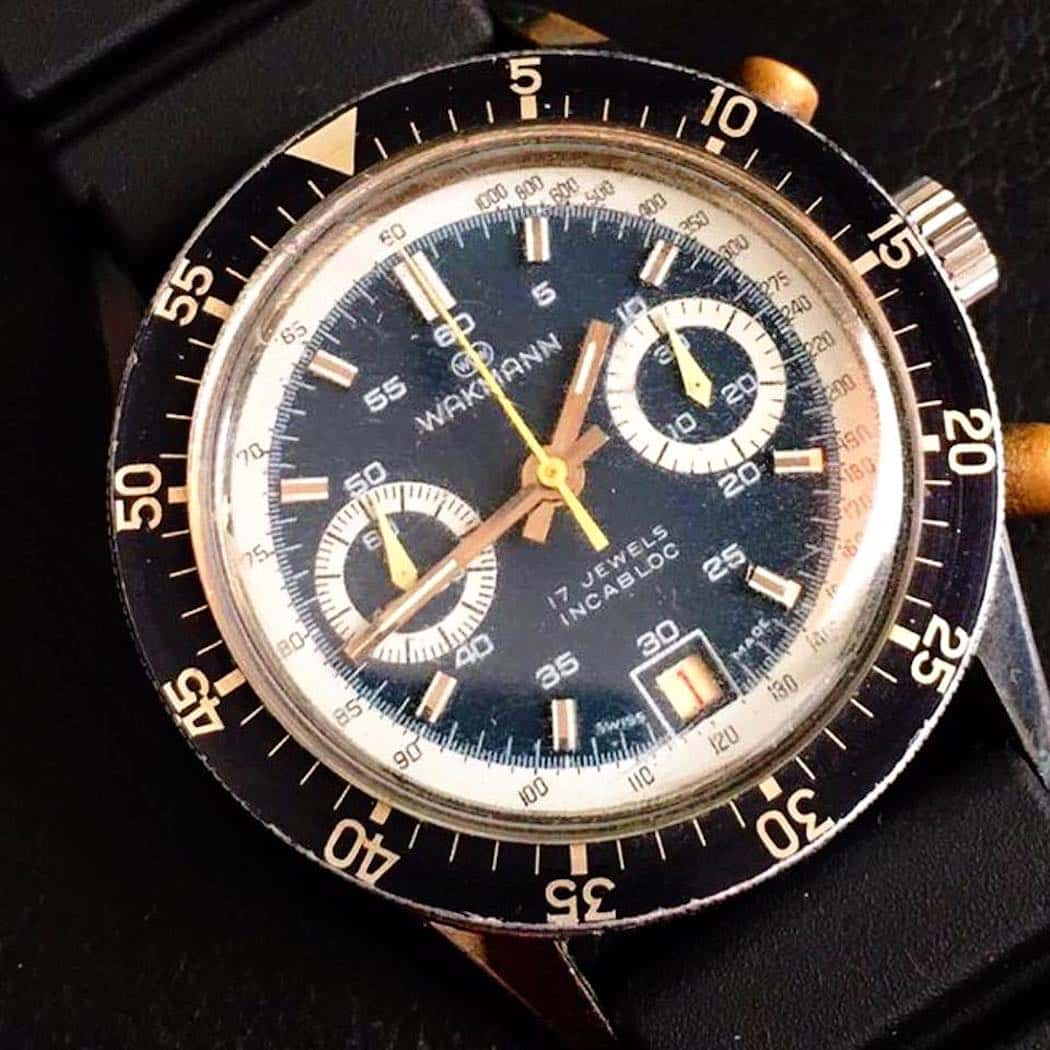 The other interesting fact is that they were branded as Wakmann’s, Gigandet’s and even Dugena’s – and possibly more. The movements used? Along with the close cousins (different case, but a watch made in loads of variants) Croton/Nivada-Grenchen Chronomaster Aviator Sea Diver and Wittnauer 7004A, the Big Boys take the cake with a true laundry list of utilized powerplants. 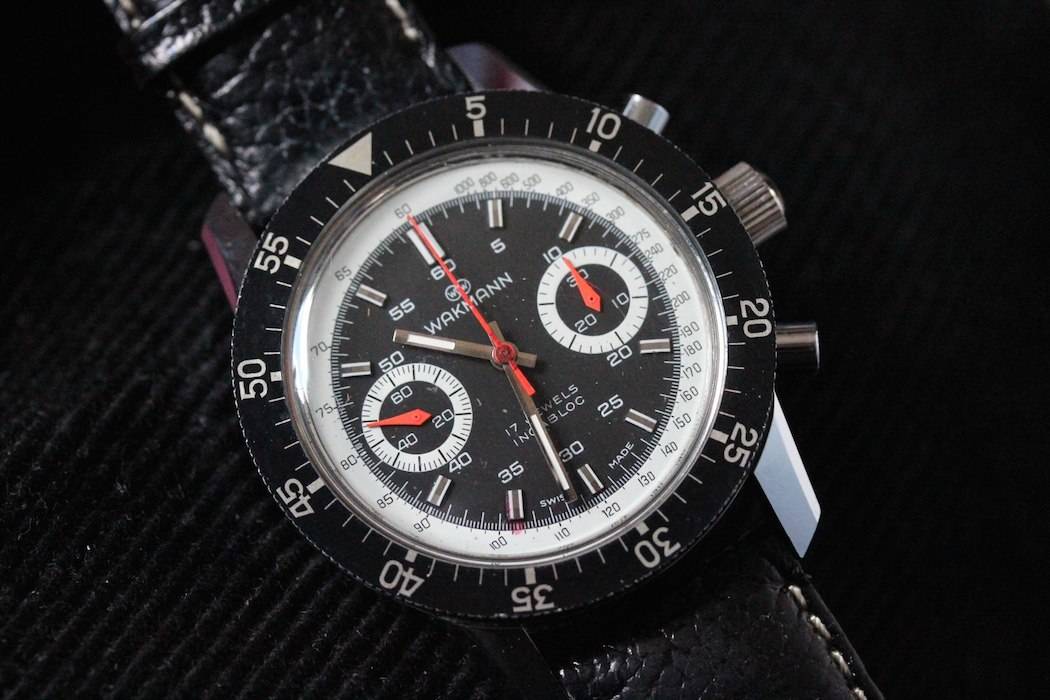 A Wakmann Big Boy with a Valjoux 236 (photo credit: @watchesandart)

Thus far, we’ve found versions with the Lemania 1872, Valjoux 234, 236, 7733, Landeron L148 and even the Caliber 12 automatic. And then there are the dials – there are loads of variations. In fact, too many to try and even describe but you can see just some of the different variants throughout the article. 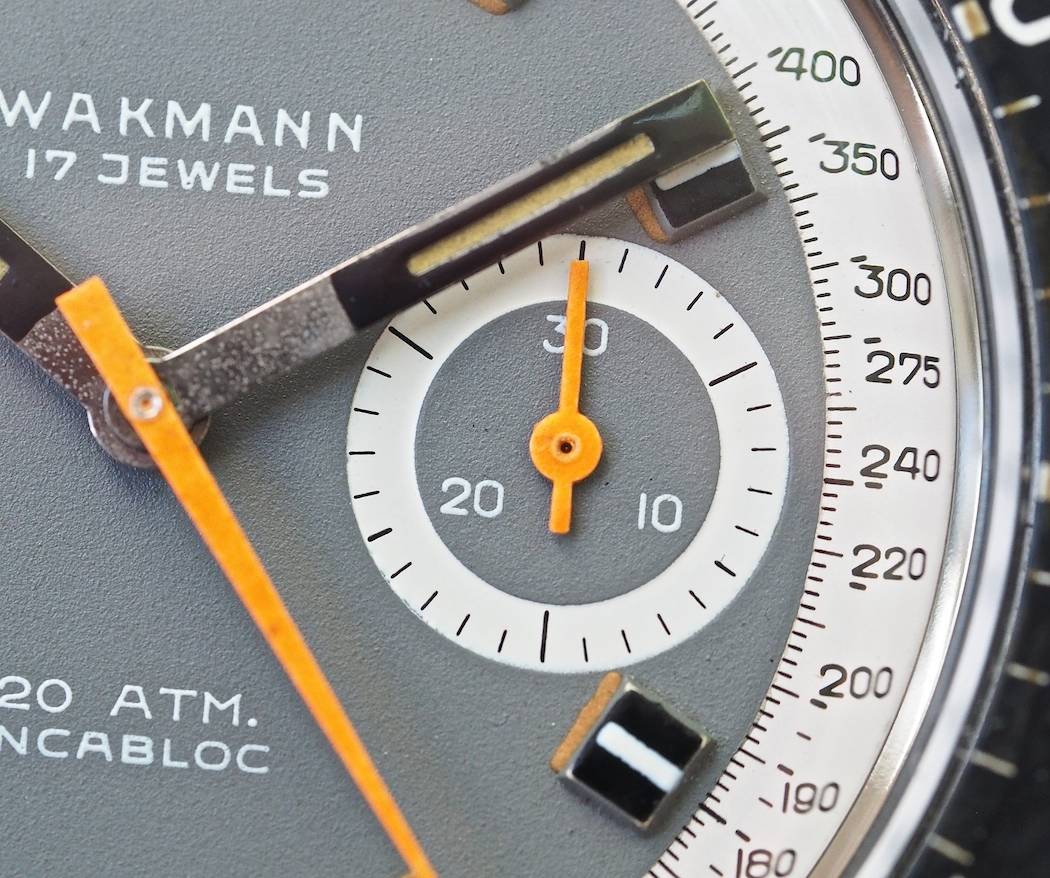 In this macro if the Wakmann Big Boy dial, you can clearly see how the grey is painted onto the dial

The Wakmann Big Boy has a superb dial

Coming back to the featured Wakmann Big Boy chronograph in this article, we have a version with a very “Monte Carlo-esque” color scheme. The dial is essentially grey with a white tachymeter ring and similar rings around each of the two sub registers. At a glance, it appears as if the grey bits are separate pieces than the white, but it isn’t the case. No, the grey is actually painted on the dial and – it’s fantastic. In fact, it’s done with such great quality that, and I hate to say this, I actually find it more visually compelling than a similarly equipped Heuer 3646C. Of course, it isn’t just the dial itself that makes things interesting. 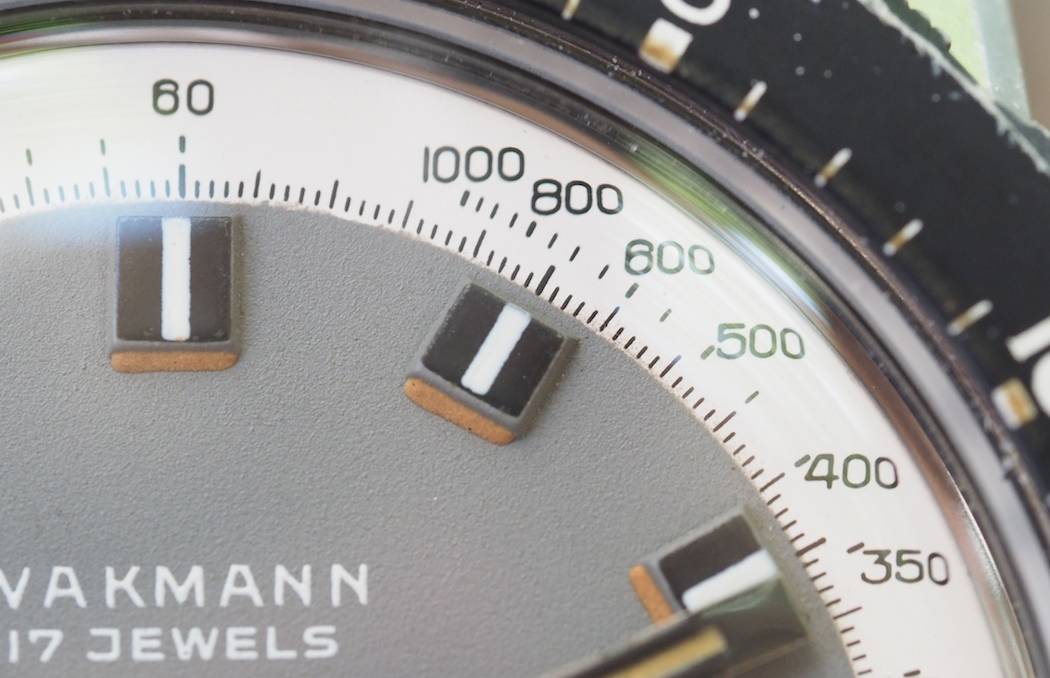 On the Wakmann Big Boy, simple, tri-striped applied indices are bordered on one side with now-orange tritium

The applied indices are appropriately weighted for the large dial without being overbearing and are basically tri-striped with alternating black and white. On the inside, leading edge of these indices one finds lume that has, coincidentally, turned a bit orange. Of course, this works beautifully because the sub hands and central chronograph hand is, you guessed it, orange.  The main hands are simple rectangles that, once again, are beefy enough to fit the dial and they really do thematically align with the design of the hour indices. 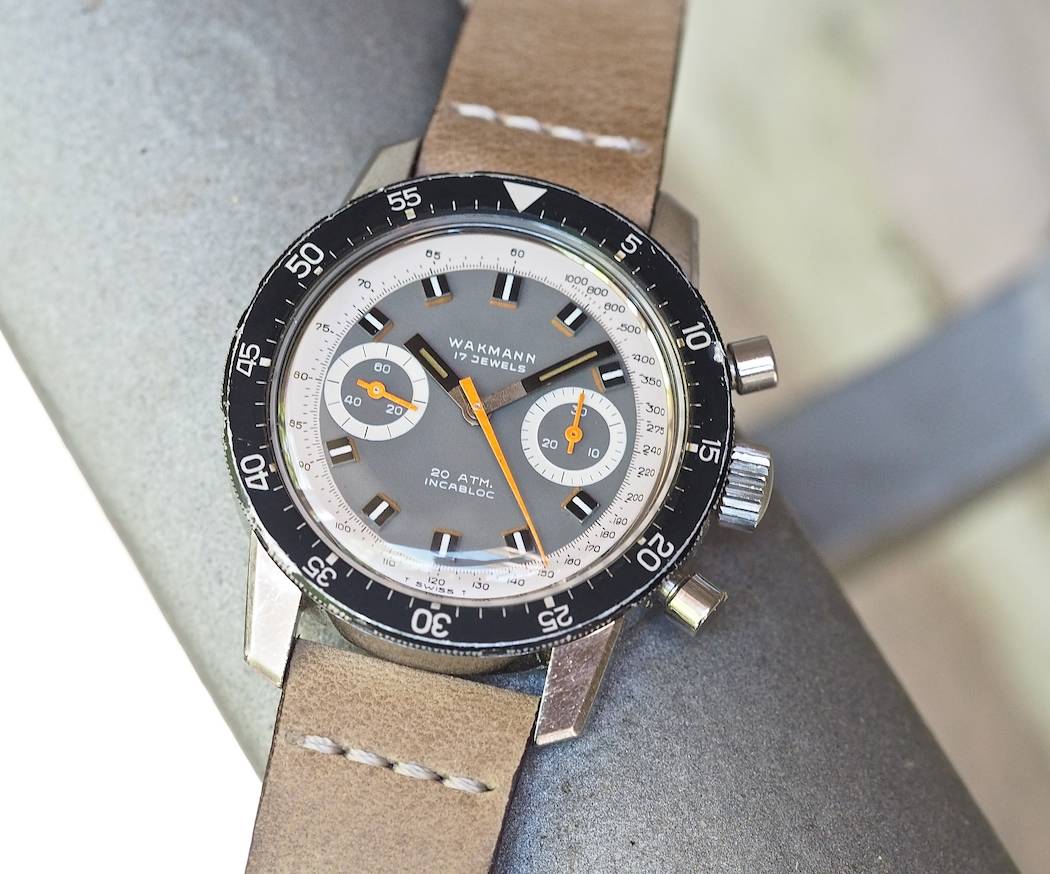 Note the knurling on the rotating bezel of the Wakmann Big Boy – it’s effective for operation and for picking up dings!

Topping the dial of the Wakmann Big Boy is a nicely domed crystal and, of course, the bold rotating bezel. You can see that this bezel has its share of minor bumps and bruises, but it does overhang a bit – this makes turning it easy – and it’s a big watch. 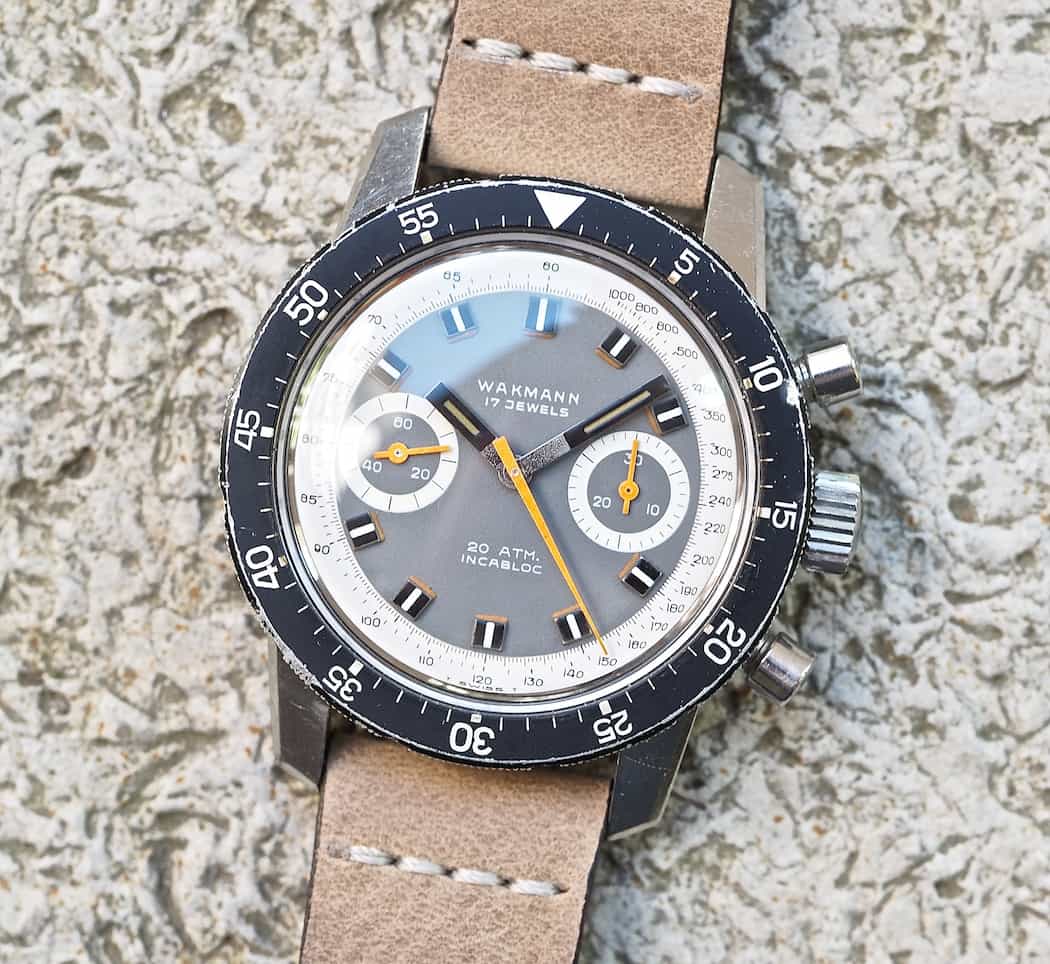 Big, sturdy pushers and a fat crown round out the bold looks of the Wakmann Big Boy

On the side, one finds big, sturdy capped pushers (lately, I seem to have purchased chronographs with small pushers or pieces with some rather wobbly devices) and a gloriously large winding crown. This crown is unsigned, as it should be, and is perfectly suited for such a big watch. 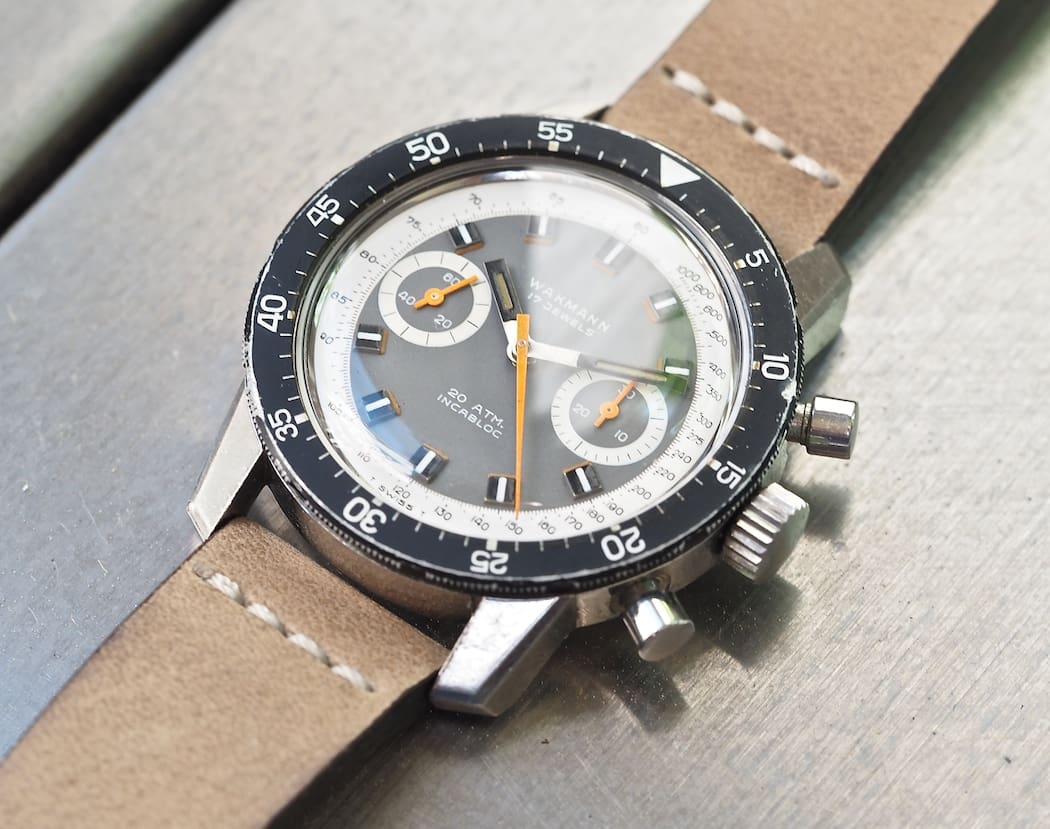 Note the broad chamfers found on the well-proportioned, not overly long lugs of the Wakmann Big Boy

The case design itself is extremely simple with big chunky lugs that do feature nicely executed chamfers, but the overall design was definitely built to take a bit of a beating. As much as I like my finely detailed chronographs, and I do like them, there’s something simply perfect about the execution of this watch overall – it’s just so nicely proportioned. 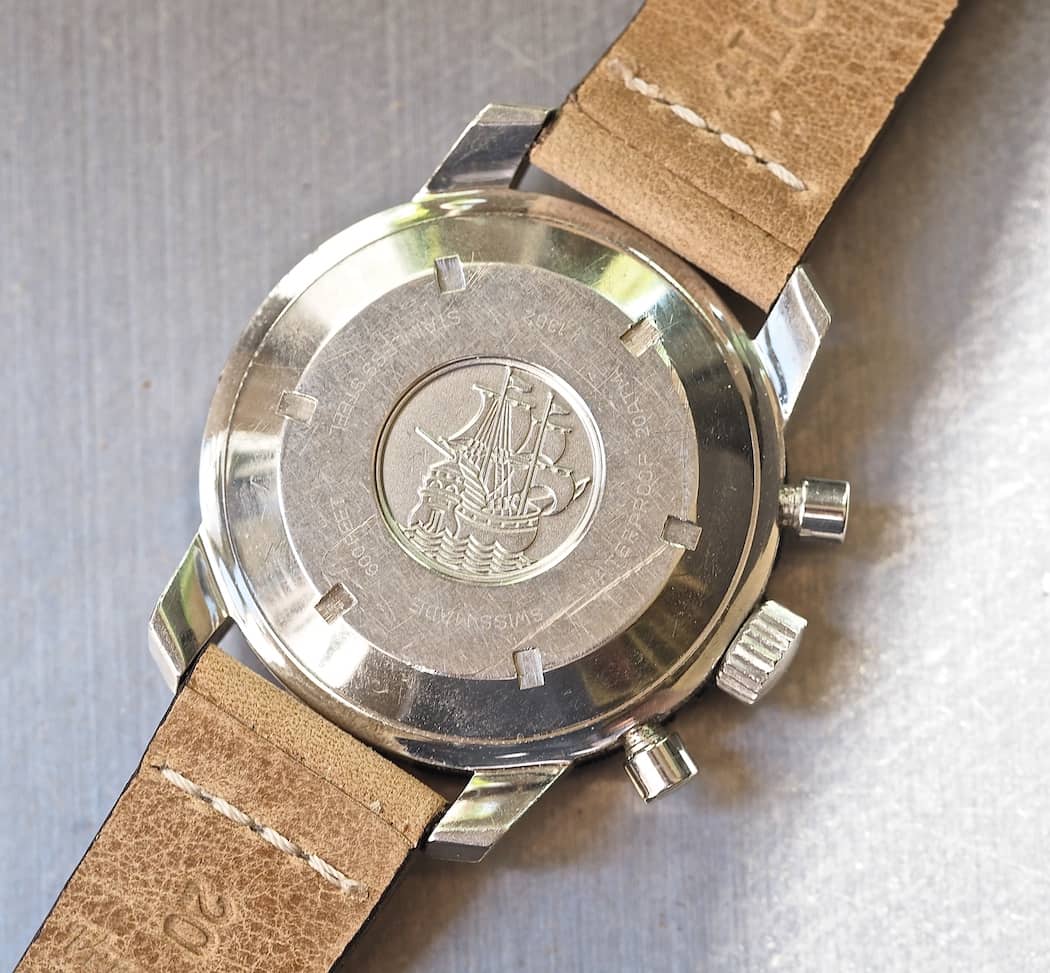 Lastly, I can’t leave out the inscribed case back on this piece that features a ship. It’s awfully dated but it least speaks to some level of attention to detail. Everything seems to be in harmony and did I mention that I really enjoy that dial?!?! 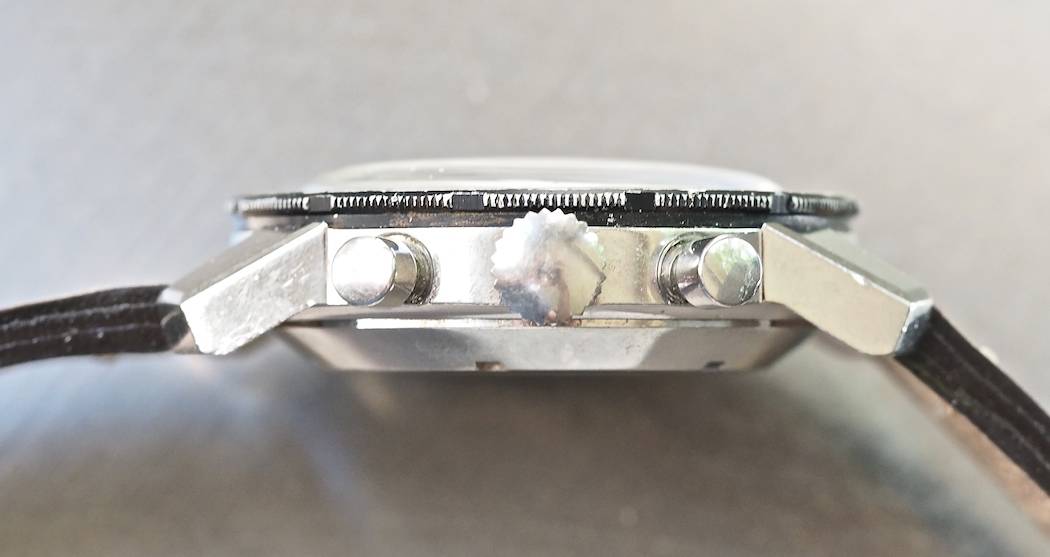 The side view of the Wakmann Big Boy

I can’t remember when I came upon this Wakmann Big Boy, but I do know that the seller had it listed for what was then a silly price and it didn’t sell. When it came back on eBay, it was reduced but I ultimately made an offer and bought it for around $700. I had no idea what was inside the watch – it turned out to be the venerable, if not exotic – Valjoux 7733, and the details were sketchy. Still, the tealeaves seemed to show a good case and bezel along with a nice dial under a heavily scratched crystal. The seller mentioned that the watch worked – it didn’t – but I kept it anyhow as prices were already on the rise and pieces were becoming less prevalent on the market. I ended up sending the watch to Andreas and he ended up sending it to the UK to one of his trusted watchmakers. The watch needed some fairly serious work, but, as you can see, it is now in lovely, unaltered condition and runs perfectly. 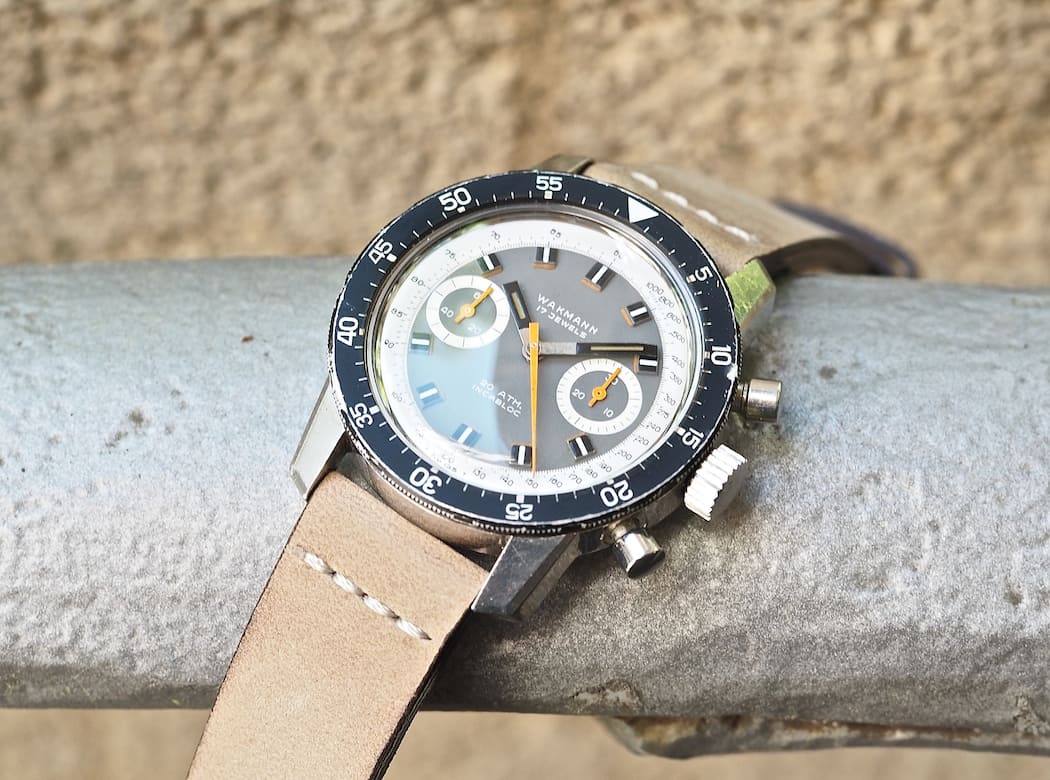 This lovely 20mm leather strap as seen on the Wakmann Big Boy was a great purchase from Andreas at gregoriades.com

I’ve paired this watch with a lovely, and affordable, strap from Andreas. They’re new and out of Italy and really suit a big-cased watch like this. I toyed with a number of shades but ultimately settled on a light brown as it helps augment the dial. 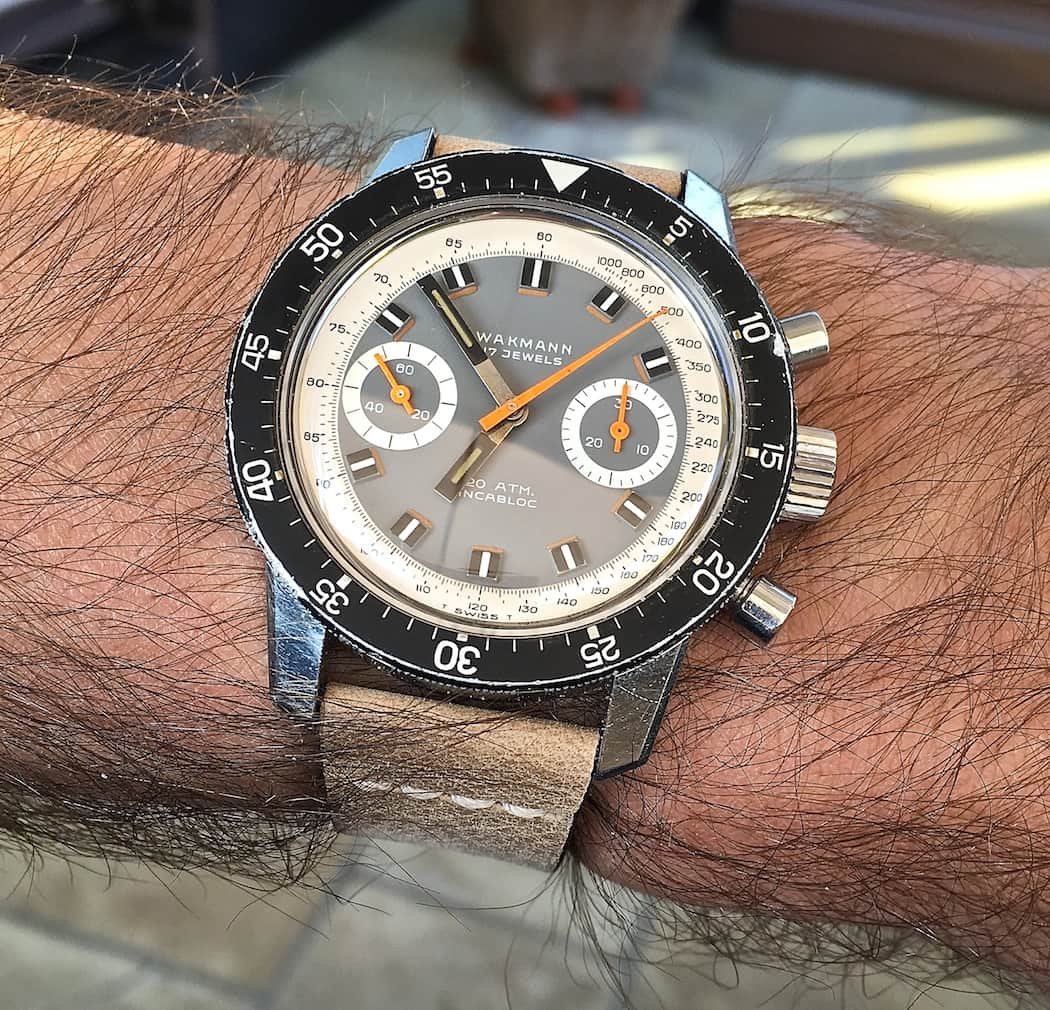 The Wakmann Big Boy on the wrist

Wearing the Wakmann Big Boy is great as it’s rugged and large, yet manages to fit well under a shirtsleeve due to its reasonable thickness. The lugs, by the way, aren’t actually that lengthy so it does help the watch fit on a smaller wrist like mine. 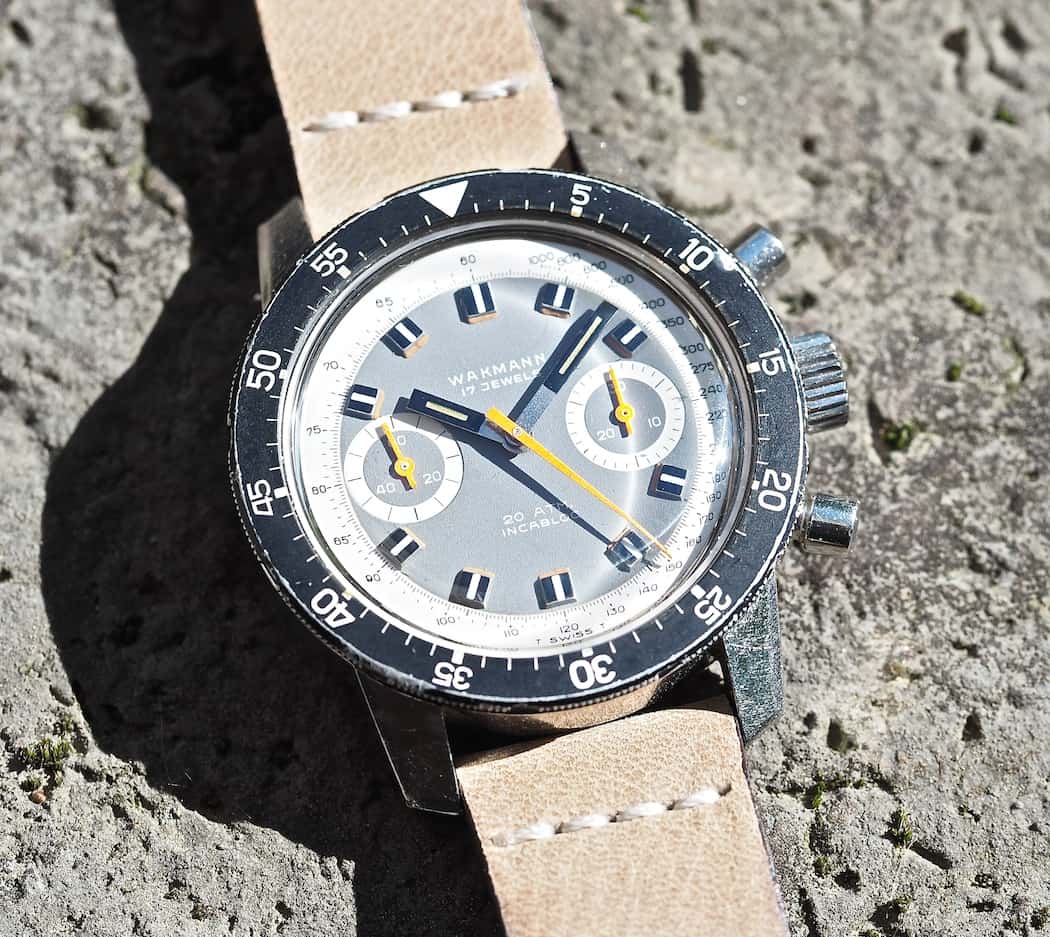 Assessing the market for the Big Boys

Value wise, it’s hard to say what a Wakmann Big Boy, or any of the familial pieces, should be worth, as pricing seems to be all over the place. For sure, the column-wheeled 236 pieces are likely the most desirable, but the dial design also comes into play and counts for just about as much as the movement. Prices were in the sub $1,000 realm, but have now climbed to anywhere from $1,750 – 2,500. On the upper end, that feels like a lot of money for watches with relatively unknown or “private brand label” names, but when compared to the similar Heuers, they’re downright bargains. In fact, in the case of the 3646C, we’re talking about a watch with a 7733, so there’s very little difference other than the snap back and the name on the dial. 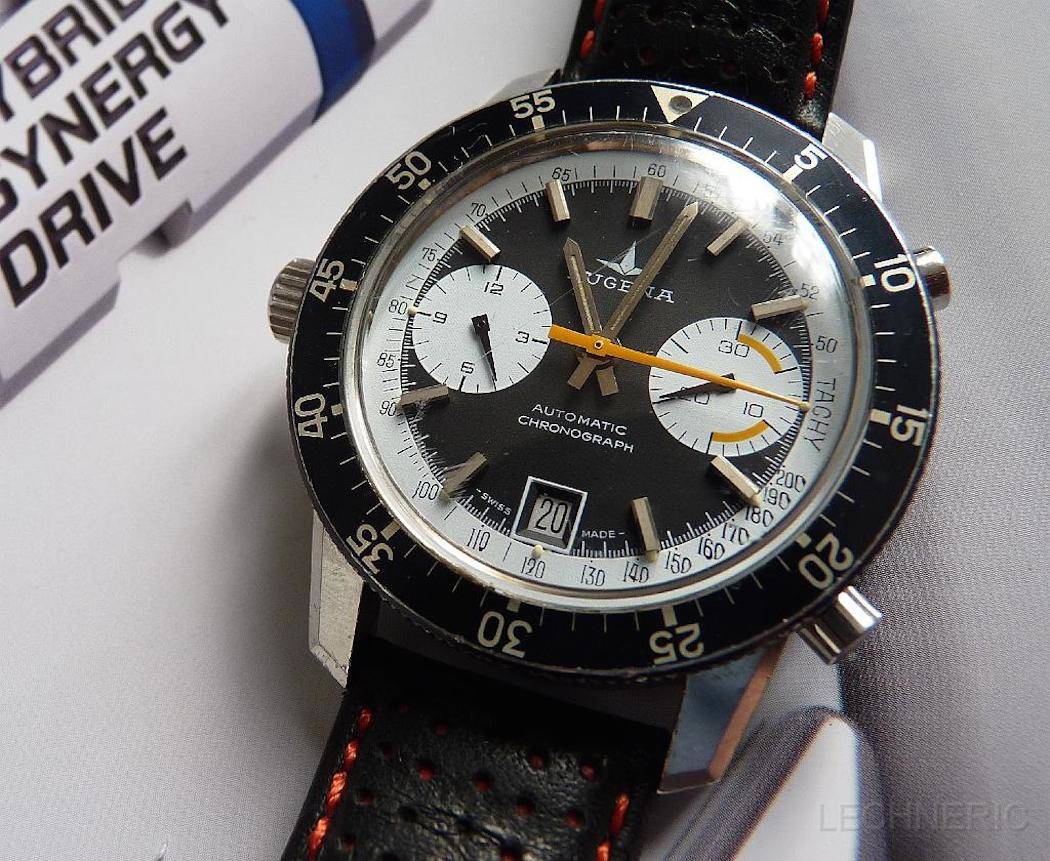 As far as availability, I’ve seen far less of these than I have of the aforementioned Nivada/Wittnauer pieces and while that doesn’t make Big Boys rare, they don’t seem to be available in droves. 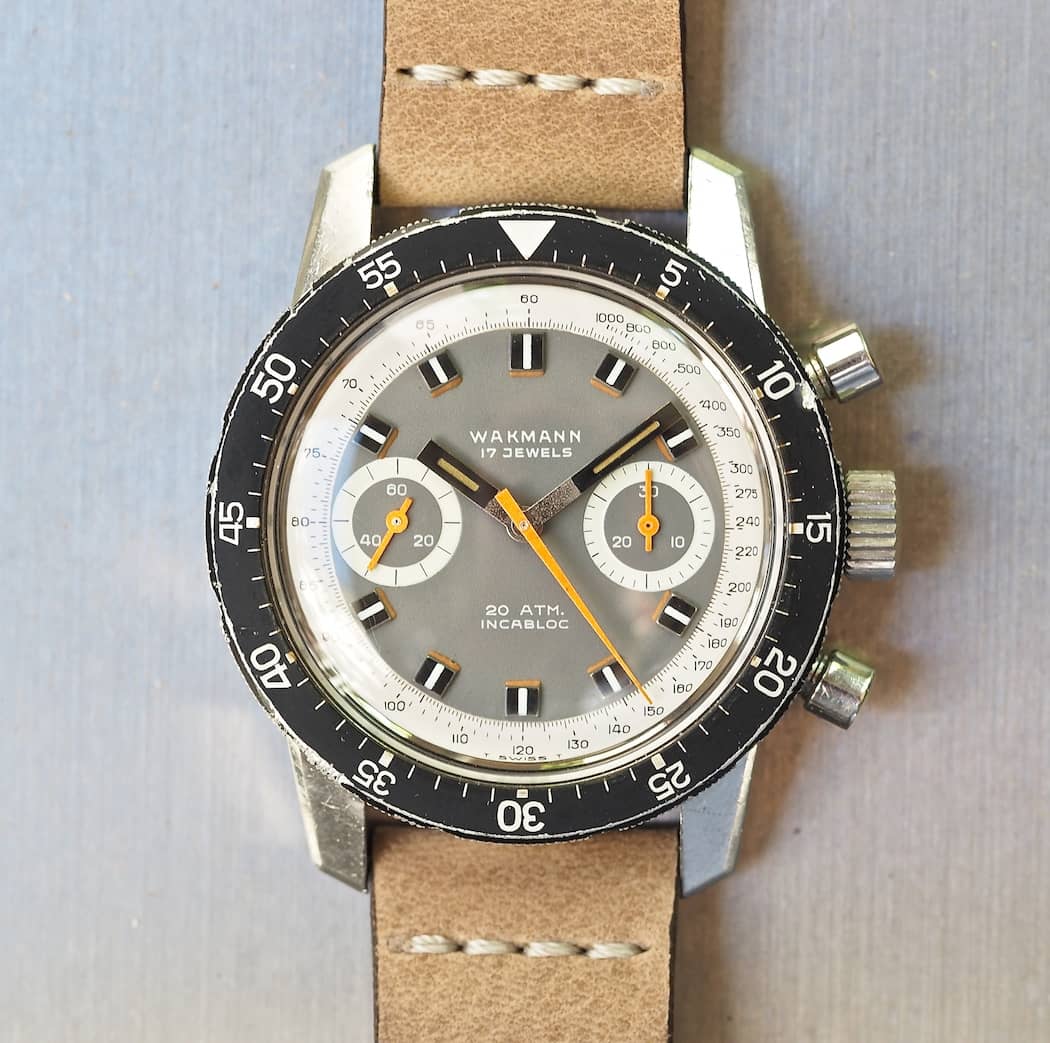 As you can see, there’s not a lot of published history on the Wakman Big Boy or the variants, so if you know more, please get in touch. Still, at face value, this is a great looking and wearing watch and with the ever-increasing popularity of the vintage chronograph, it represents a highly attractive piece at a, dare I say this, non-eye watering price. Until next week…

A Wakmann Big Boy with a Valjoux 236 (photo credit: @watchesandart)

The side view of the Wakmann Big Boy

This lovely 20mm leather strap as seen on the Wakmann Big Boy was a great purchase from Andreas at gregoriades.com

Note the knurling on the rotating bezel of the Wakmann Big Boy – it’s effective for operation and for picking up dings!

Note the broad chamfers found on the well-proportioned, not overly long lugs of the Wakmann Big Boy

On the Wakmann Big Boy, simple, tri-striped applied indices are bordered on one side with now-orange tritium

Wakmann, perhaps a name most associate with the more well known triple date

Simple writing, and not too much of it, is found on the Wakmann Big Boy

In this macro if the Wakmann Big Boy dial, you can clearly see how the grey is painted onto the dial

In my opinion, the Wakmann Big Boy makes a strong case as a visually more compelling watch versus the very similar Heuer Autavia 3646C

Big, sturdy pushers and a fat crown round out the bold looks of the Wakmann Big Boy

The Wakmann Big Boy on the wrist