Today, finding a great vintage watch for an equally attractive price can be a real chore. The word has been out for several years now with few secret corners to discover when it comes to either models or places to look for them. Sometimes, though, a bit of patience and luck converge, and that old magic feeling returns. Today’s Technos Sky Diver is a perfect example.

After something like seven years of writing for Fratello, it’s hard not to become reflective and somewhat sentimental. I look back at my older articles from time to time and the watches often define a point in time.  For example, I can recall buying the watches, where they were from, and how it felt when I finally saw them for the first time in person. I enjoyed telling those stories on #TBT, but at some point, I had to slow my roll. I had purchased a lot of the pieces I liked and turned my attention to vintage Japanese watches.

Typically, those aren’t as expensive or quite as notable as many of the big Swiss watches I bought in the past. While I could write once per week for the next two years on each of those models, I want to make sure you don’t get too bored. So, I dole those articles out selectively. It isn’t so often these days, but when I finally pick up more of a “big gun” vintage watch, I like to return to old form with a tale. I’d like to think that the Technos Sky Diver represents a watch worthy of a comeback, even if my return only lasts a page or two. 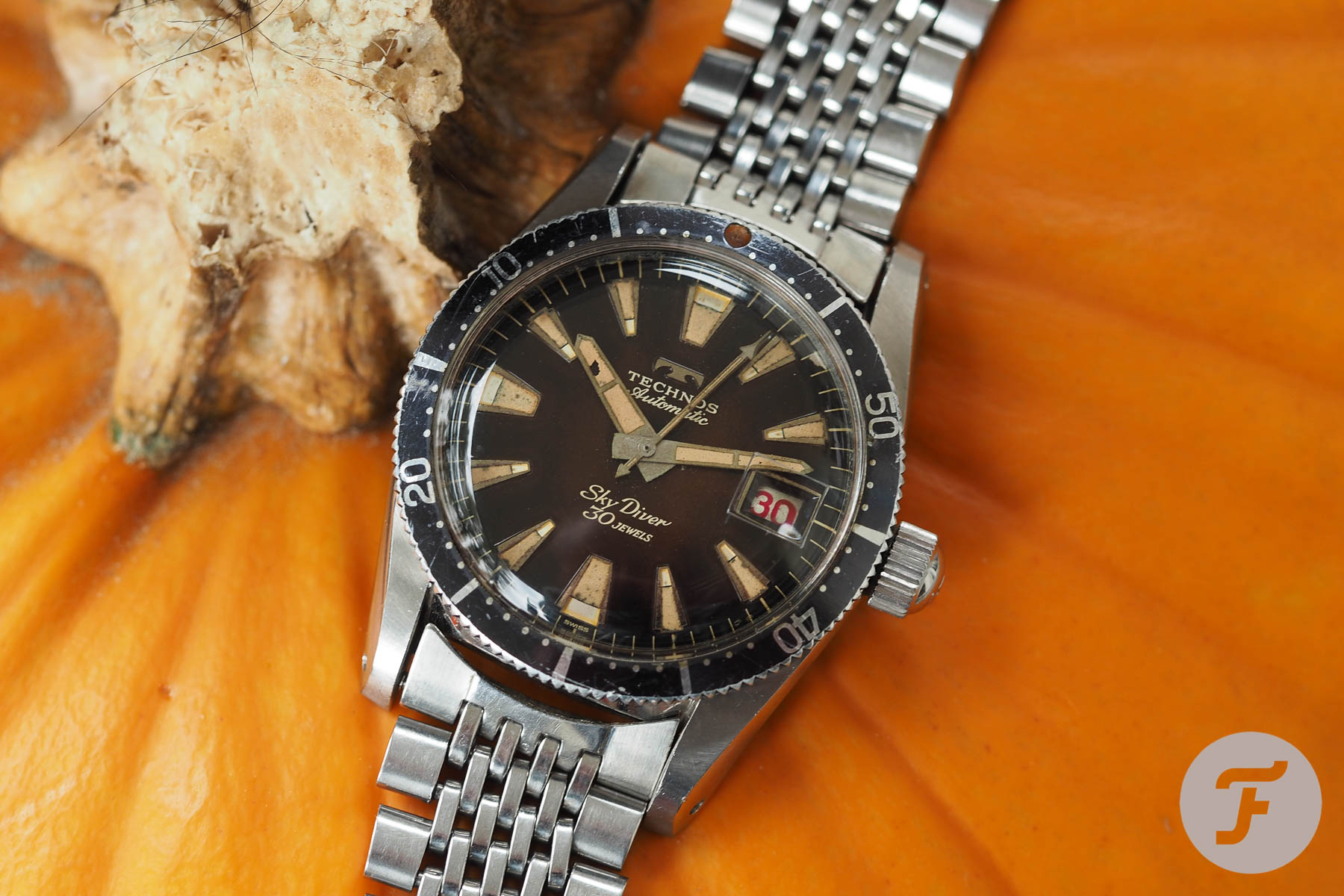 It’s important to note that these days, I literally keep less than a handful of watches on my wish list. Things have gone very expensive, and I feel like I accomplished an awful lot over the past decade or so. It’s time to enjoy what I have, monkey around with different strap options, and spend money on services. Occasionally, though, a watch like today’s Technos Sky Diver shows itself and falls into my clutches for a song. Simply put, there’s no wish list for such things. A hibernating collector has to decide whether to pounce or return to slumber. Thankfully, I chose the former. 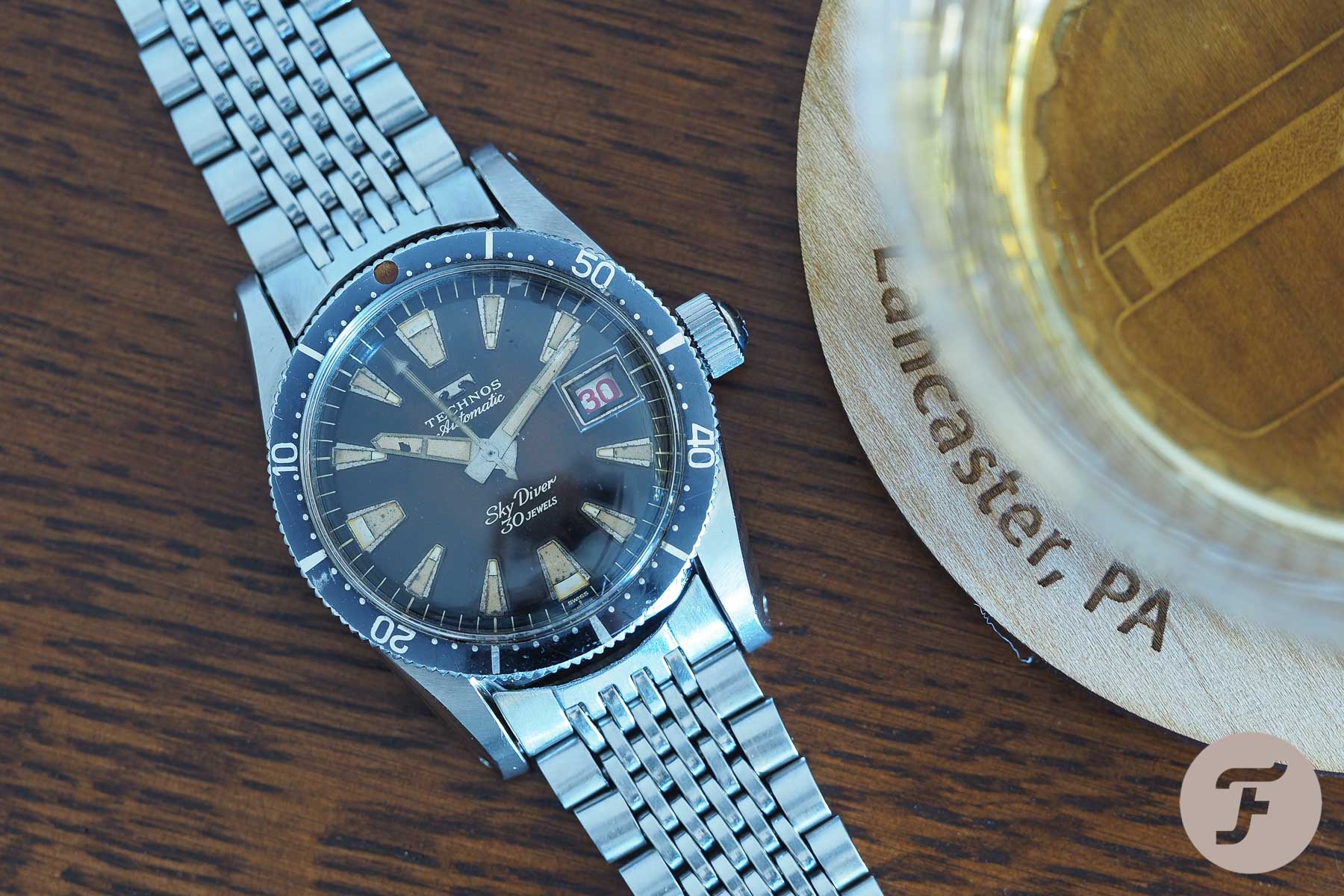 The Technos Sky Diver is a beauty

The Technos Sky Diver isn’t a truly notable dive watch as far as accomplishments, history, or brand name. What it manages, though, is to be incredibly attractive. Technos, from history, is a historic Swiss brand that made decent, middle-run type watches. For whatever reason, they chose to focus on the Brazilian and Japanese markets. Put that latter country in your memory bank because it’s relevant. Technos made dress watches, chronographs, dive watches. These pieces used third-party movements and often shared cases used by other brands.

The Technos Sky Diver uses a case found on several other watches, but that doesn’t mean that it isn’t special or high quality. Collectible watches such as the Titus Calypsomatic and Universal Geneve Polerouter used this 37.5mm stainless case with unique dials, hands, and, at times, bezels. It features a screw-down crown and screw-in case back complete with “Brevet” Swiss patent numbers indicating that the watch is more than a snorkeling watch. 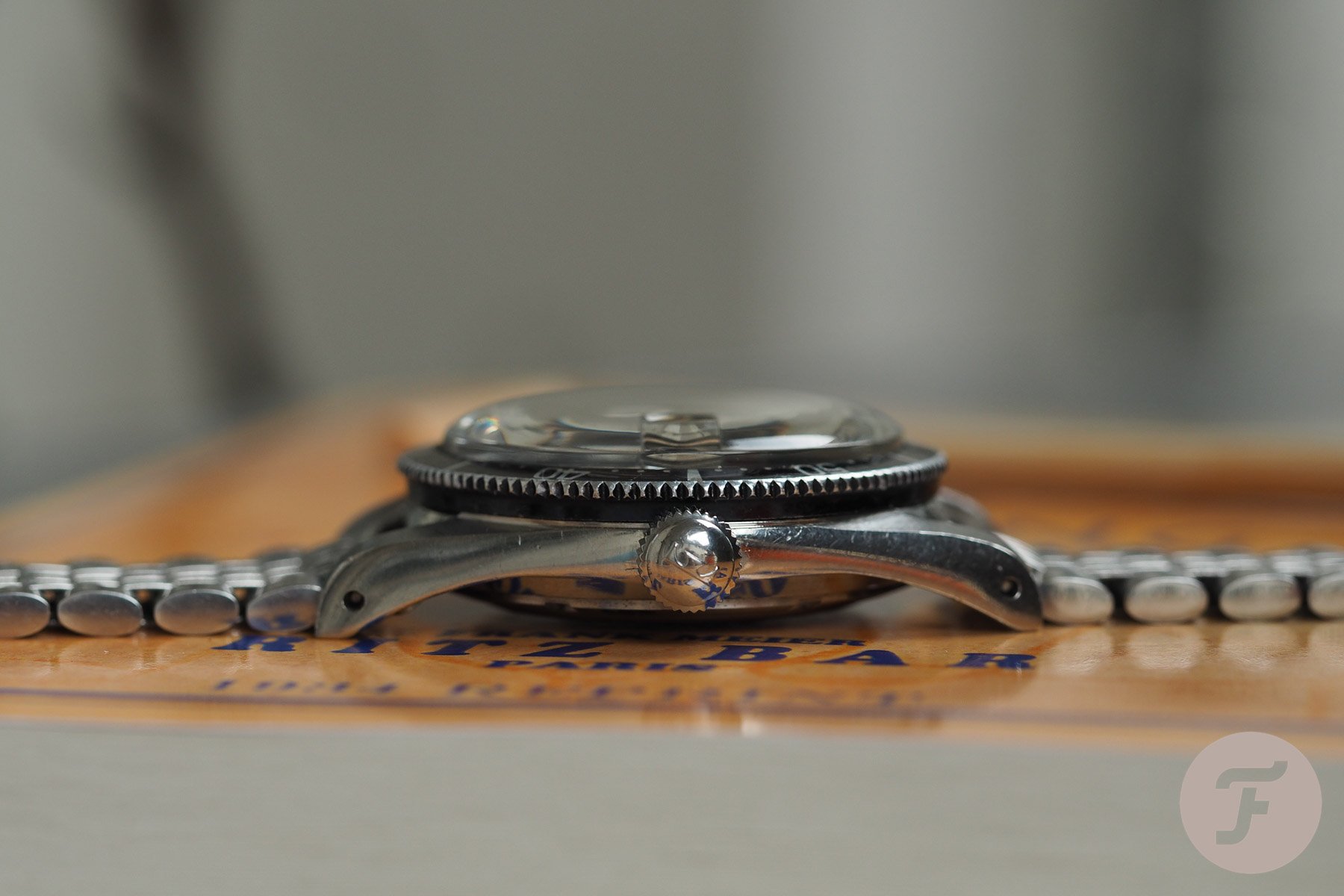 A high-quality case shared with others

What I like about the case of the Technos Sky Diver is that it contains some beautifully sculpted lugs. What it lacks in chamfer detailing on the edges, it more than makes up for with complex shaping on the sides. The flanks almost seem to twist as one moves their eyes from the crown down towards the drilled lug holes. Plus, the lugs are thick and purposeful, yet graceful in a vintage diver manner that seemed pervasive from the late ‘50s to the mid-‘60s before things became more brutal. 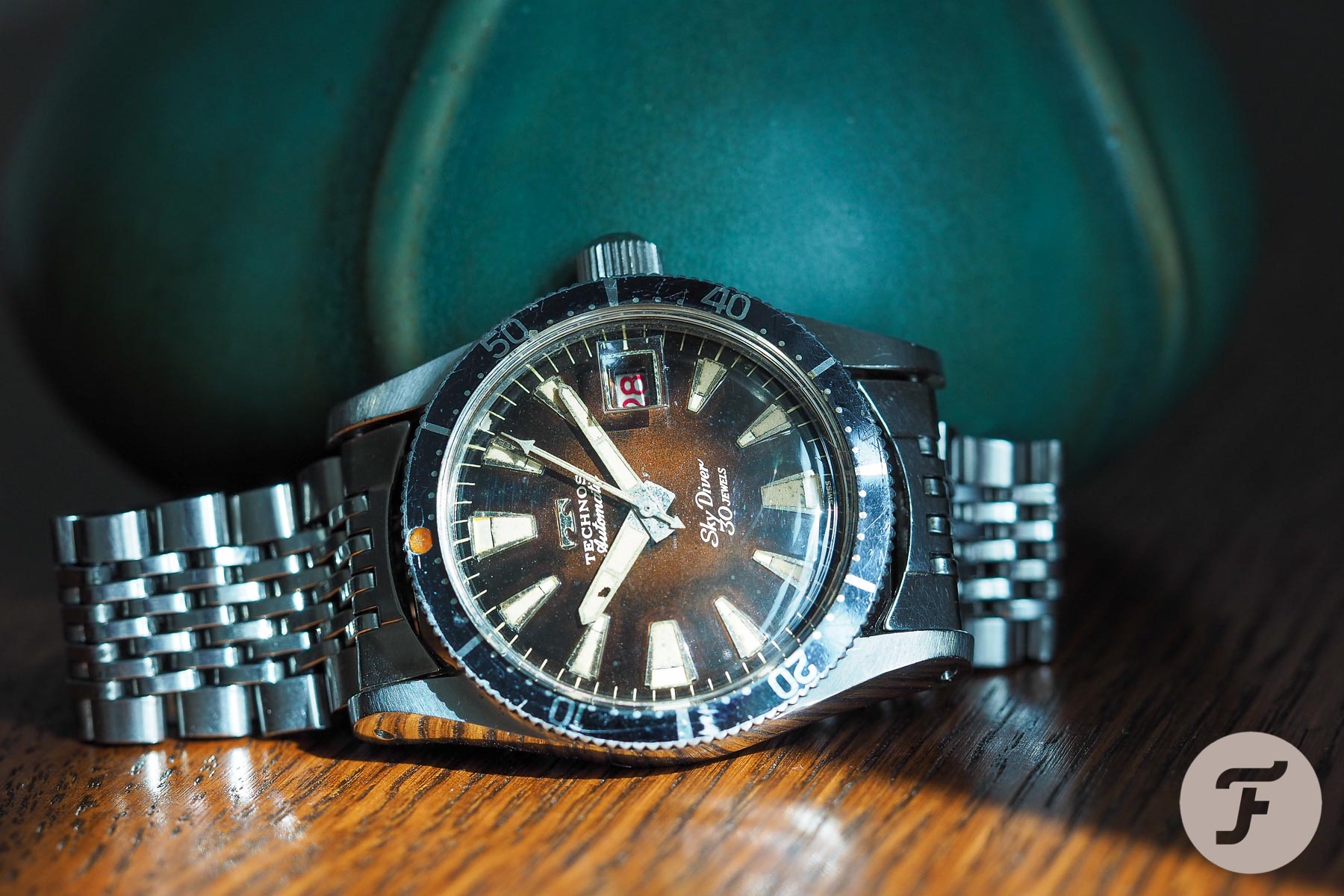 That sense of style is echoed via one of the most glorious dials that happens to grace a watch with sporting intent. This early Technos Sky Diver boasts massive swaths of radium that make up its indices. Plus, a stamped “T” logo and bold brand name lends purpose while all sorts of script font drives that elegance factor home. The hits just keep coming with a red-numbered date wheel under an internal cyclops along with massive lume-filled hands. To cap things off, the sweep hand brings in arrow tips on both ends. There’s simply no shortage of style here. Aside from those visible dial characteristics, the Technos Sky Diver comes with an expected domed acrylic crystal. This is surrounded by an attractive, but somewhat generic bi-directional dive bezel with a round lume pip at 60. 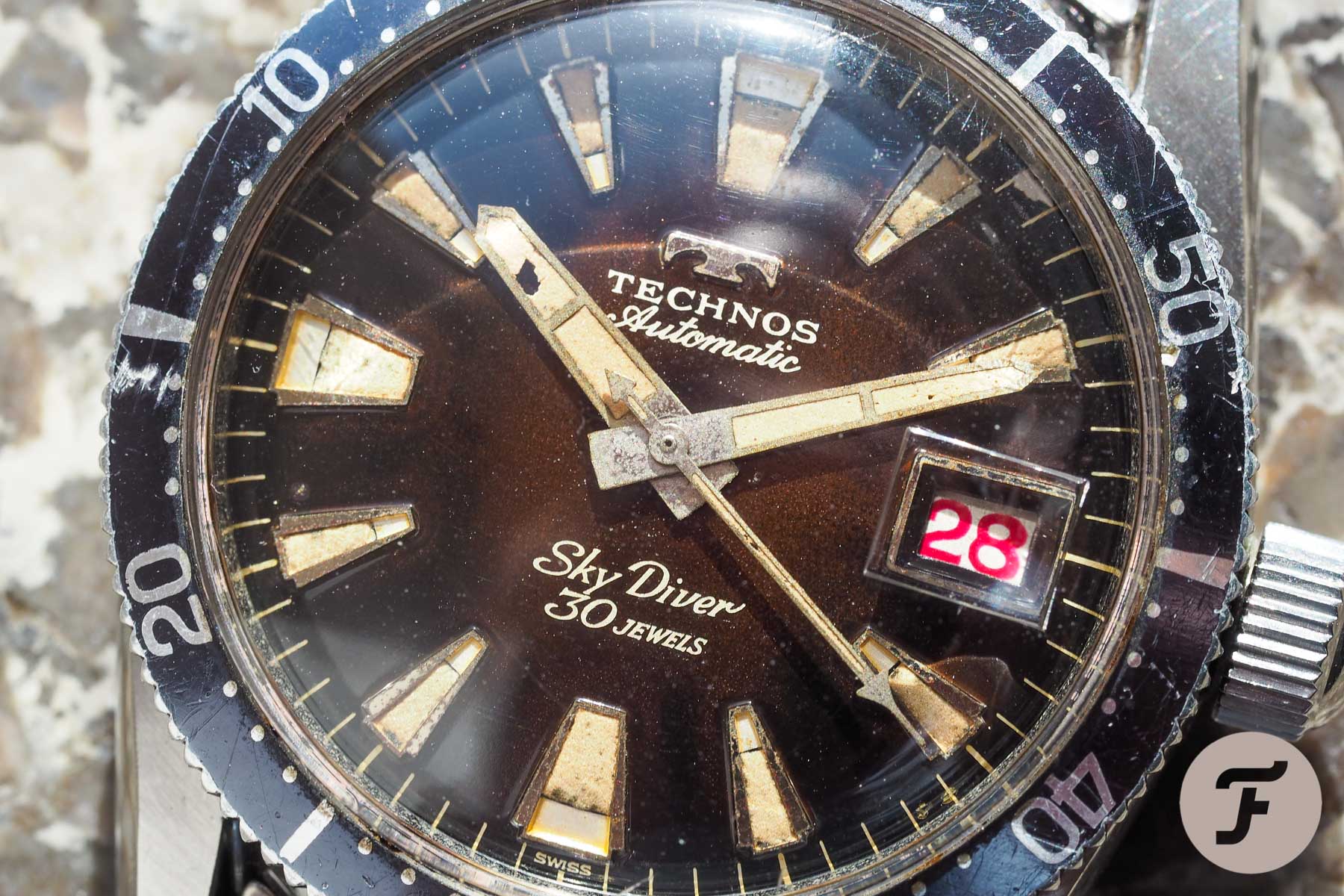 My first experience with something truly “tropical”

You’re probably asking yourself by now, “when is he going to talk about that dial?” Well, I talked about the dial topically, but I need to talk about this dial specifically because it deserves special attention. It’s funny, but I’ve purchased so many vintage watches and this is the first time that I’ve truly hit paydirt as far as a model with ridiculous patina. I’ve never sought out “tropical” because I don’t like the thought of paying for it, but this watch brought it gratis. Folks, the dial on this Technos Sky Diver is simply stupendous and the only semi-apt description I can think of is “lacquered wood.” It’s almost liquid and looks like something altogether different depending on the lighting. 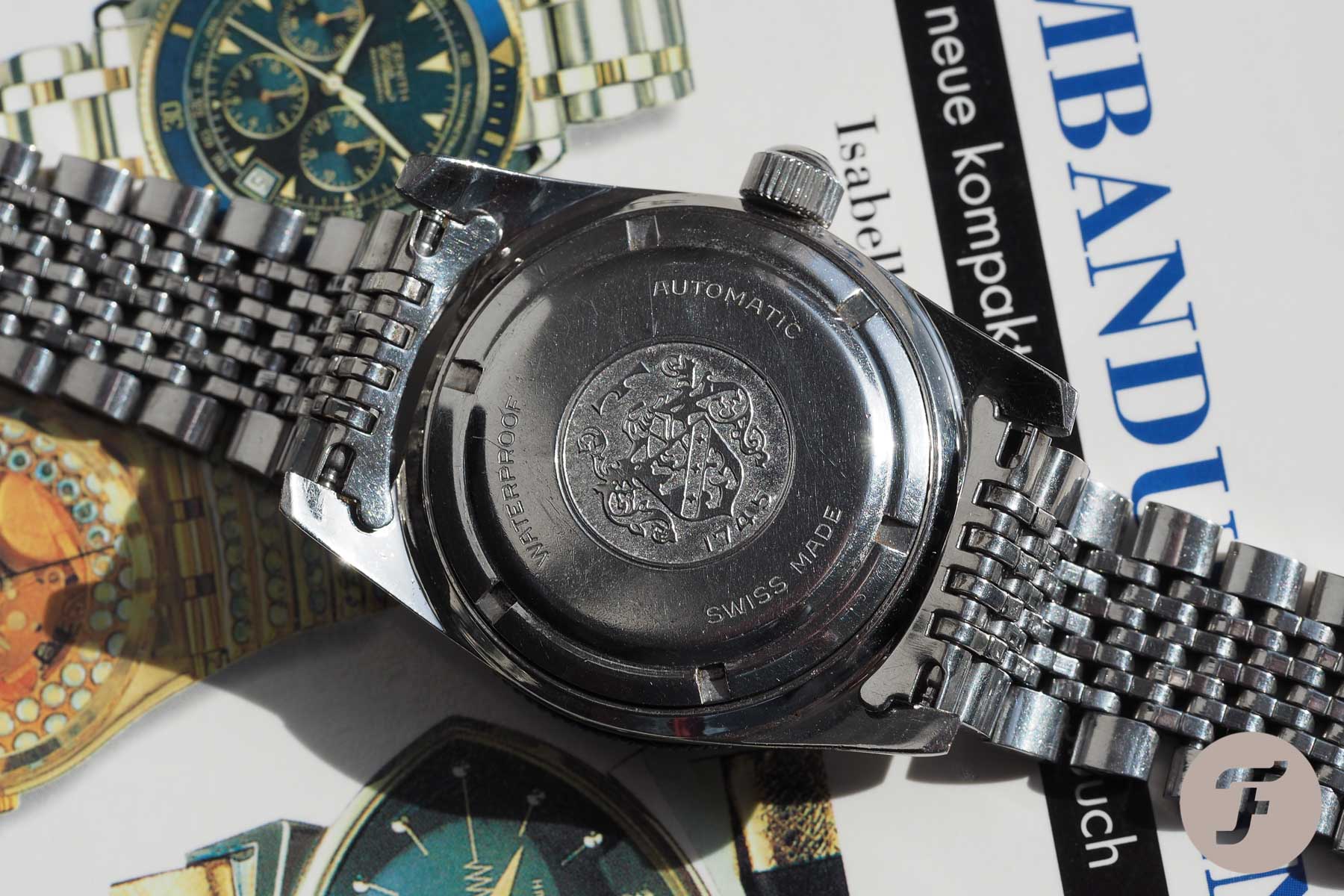 This Technos Sky Diver won’t have me paying double or more for a tropical Rolex or Omega, but I get the appeal if it’s truly special. This watch, with what was originally a glossy black dial, seems to be well set up for going tropical because the coloring works perfectly with all that lume. The tone change took what was already a great-looking watch and has turned it into something that can compete with pieces traditionally far dearer.

This Technos Sky Diver came from Japan and I have to thank the usual suspects for helping to bring it home. Eric provided boots on the ground, Haroon brought the sage vintage diver advice, and Patrick helped with logistics. The wild thing is that the auction pictures looked good, but the watch ended on a strange (i.e. non-weekend) night and brought less than market value. Those pictures, though, were seriously underwhelming versus when Eric finally got it in the mail. He’s not easy to excite, but he loved this watch. 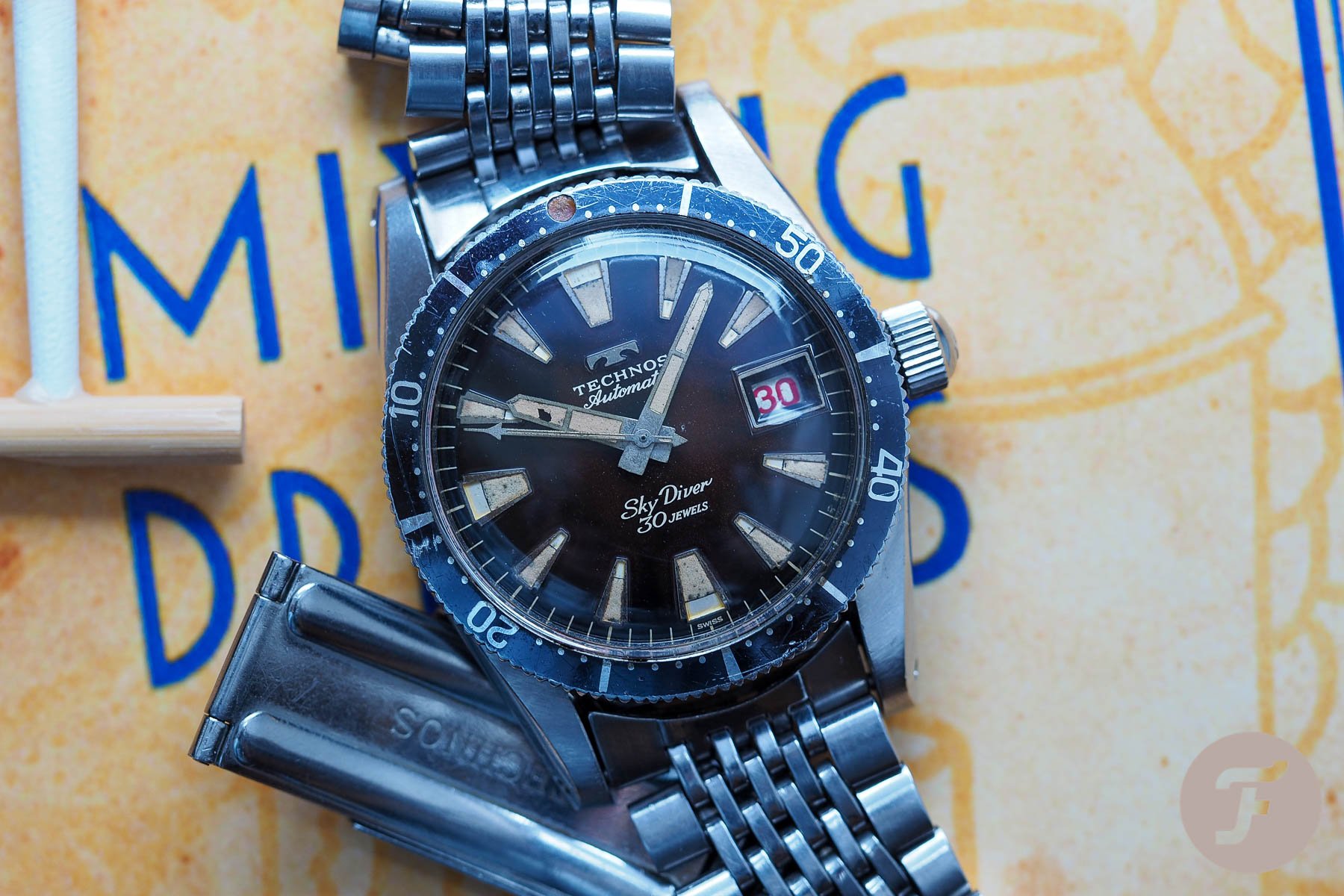 When it arrived, the Technos Sky Diver came on a fairly decent 20mm leather strap. It was the kind of strap that tells you that the seller knew he had something decent, but thankfully he or she honored the fair open auction. I followed Haroon’s lead and picked up a dressier same-era Technos Datejust clone with a beads of rice bracelet. It’s not the same style that originally came with this watch and the end links aren’t perfect, but I think it adds some nice charm.

Work to be done

When I received the Technos Sky Diver, I noticed that it was seriously noisy and clanky. The A Schild automatic felt like the rotor was askew. Plus, when I pulled the crown out, just a touch of force had it coming off the watch! It was high time for a visit to James Marien in Belgium. James found issues with the gear train and obviously the crown. I ended up buying a donor watch (the Datejust clone actually had a very different ETA movement) out of Portugal on eBay for €35 and that did the trick. A month or so later, the watch was finally ready for my wrist. 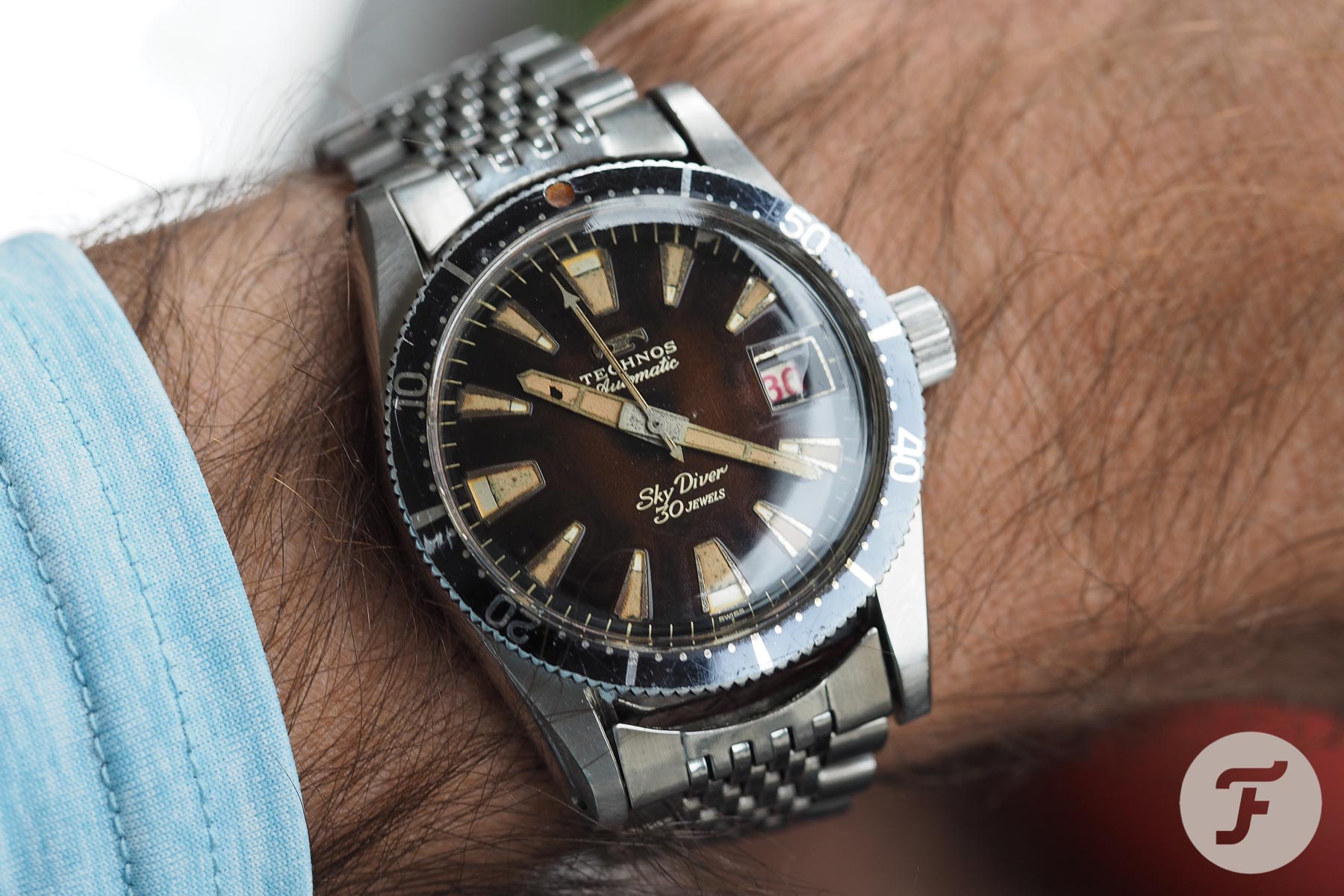 When lug width tells the story on wearability

The longer I am in this game, the more I realize that there’s more to life than a watch diameter. Yes, lug to lug is relatively crucial, but lug width actually sends a really strong message. The Technos Sky Diver is a really good example of this because this watch looks beefy and solid. Thankfully, it’s also very well built. Much like a vintage Rolex, this watch actually feels like it could be worn on a near-daily basis. Also, the fact that it is older, means that it’s comfortable with great proportions. Finally, even though the Technos bracelet isn’t original, it’s well crafted.

The market for the Technos Sky Diver is a fairly hot one. People like these watches and they’re certainly collectible. Weirdly, the Titus version has been the hotter model historically, but the Technos has come up in the world. Now, there are a number of variations of this watch with slightly different dials, tritium on later versions, and even different dials. I haven’t studied enough to tell you the difference in values, but I think that between €2,000 and 3,000 should land a decent example. A nice thing is that pedestrian Technos models abound and, therefore, it’s easy to find movement parts. Obviously, dials, hands, etc. can be challenging. 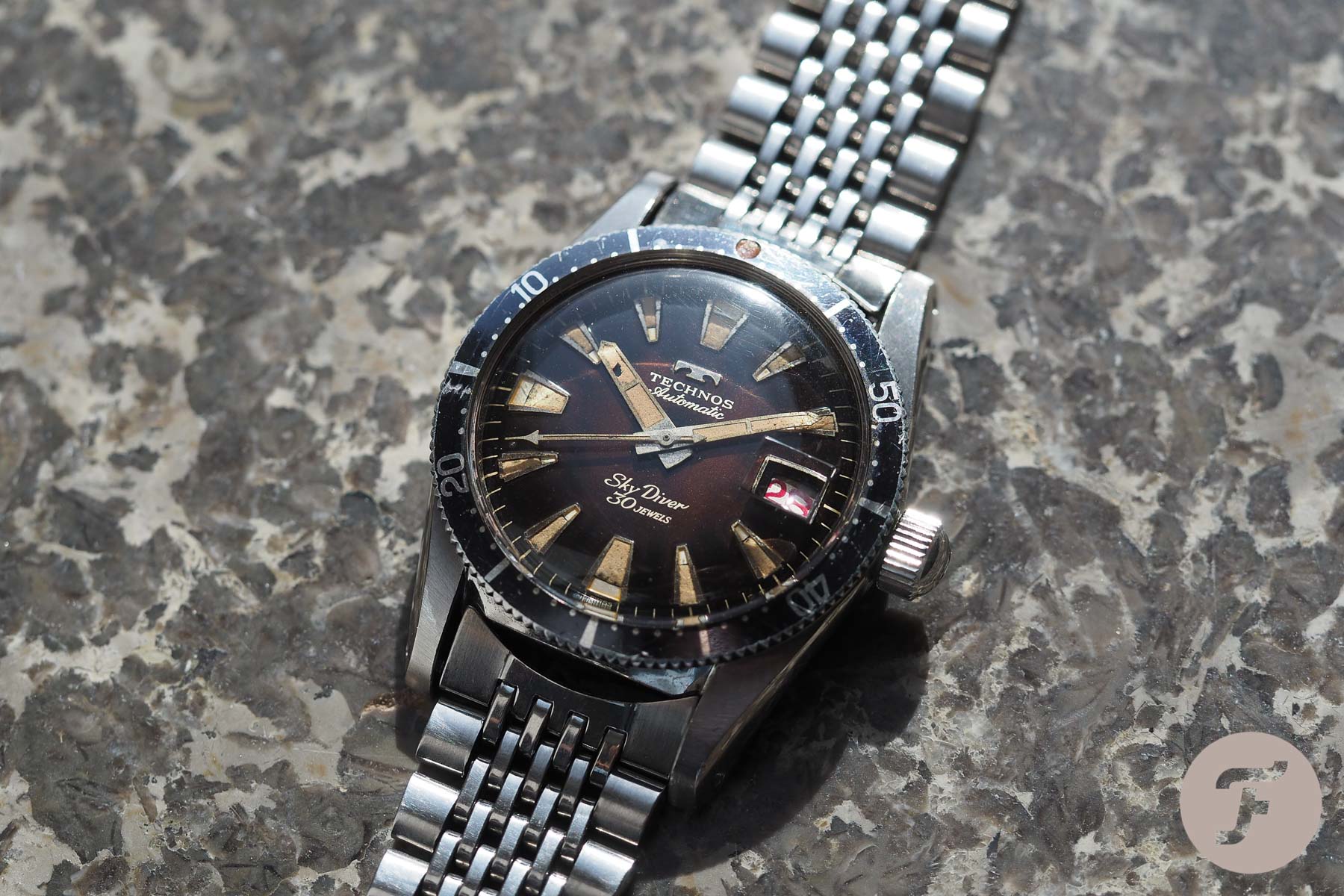 This Technos Sky Diver wasn’t a planned addition to my collection. It was luck that it came along and luckier I had friends who helped me get it home. This is a special watch with a lot of styles. Plus, when I look at the costs associated with getting it back into shape, it was a good deal. However, with the prices of Omega and Rolex divers now in the stratosphere, this watch feels even more attractive. Perhaps absolute bargains don’t truly exist any longer and they’re relative, but there are still good value pieces out there.