Testing Fortis Watches In The Arctic For Space Travel: Balloons, Helicopters, And Adventure…

Tintin's got nothing on Fratello...
Rob Nudds
comments 15
Share

I’ve never seen a helicopter up close before. I’m excited. I’m not expecting to be so (almost literally) blown away by the power of these machines, but it turns out I should have been. We race down to the landing area just in time to see them both land, but it isn’t until our (unbelievably young) pilots fire up the engines for take-off that the forces at play become apparent.

Matze boards the first copter with his filming equipment. He’s traveling with one representative from Esrange who is specially trained to help us recover the payload, wherever it may have landed. As his captain sets the blades in motion, we’re treated to a fearsome show of human engineering firsthand. The helicopter is taking a while to warm up. The noise is deafening. I clap my hands over my ears but, very quickly, the snow spray whipped up by the propellers as they pick up the pace is coating me like icing sugar on a cake, and I realize I’m at least one pair of hands short to protect all of me at once. I take my hands away from my ears in an attempt to raise my hood but it is caught by the strident gusts being slung in our direction.

The engine seems to change gear. The sound becomes more guttural. As the copter’s skids begin to shift beneath it and it seems to suddenly achieve weightlessness, the force nearly knocks me off my feet. It’s at this point I realize I am probably standing too close for comfort, so I allow myself to be scooted back a few feet by the wind.

Soon enough, Matze and co. are in the air and oriented for Finland. Andreas (Fortis), Stefan (Esrange), Kat (WTF), and I (Fratello) board the second red bird and get ready for departure. I don the headset and hear the pilot’s voice coming through loud and clear. He sounds totally calm. In fact, everything about him is calm. He’s a tall, slim, maybe early-twenties guy with a company baseball cap and a languid expression. By the looks of him, he’s been flying helicopters since he was in diapers. Apparently, that’s not the weirdest thing to have been doing with your time in this remote part of Sweden. 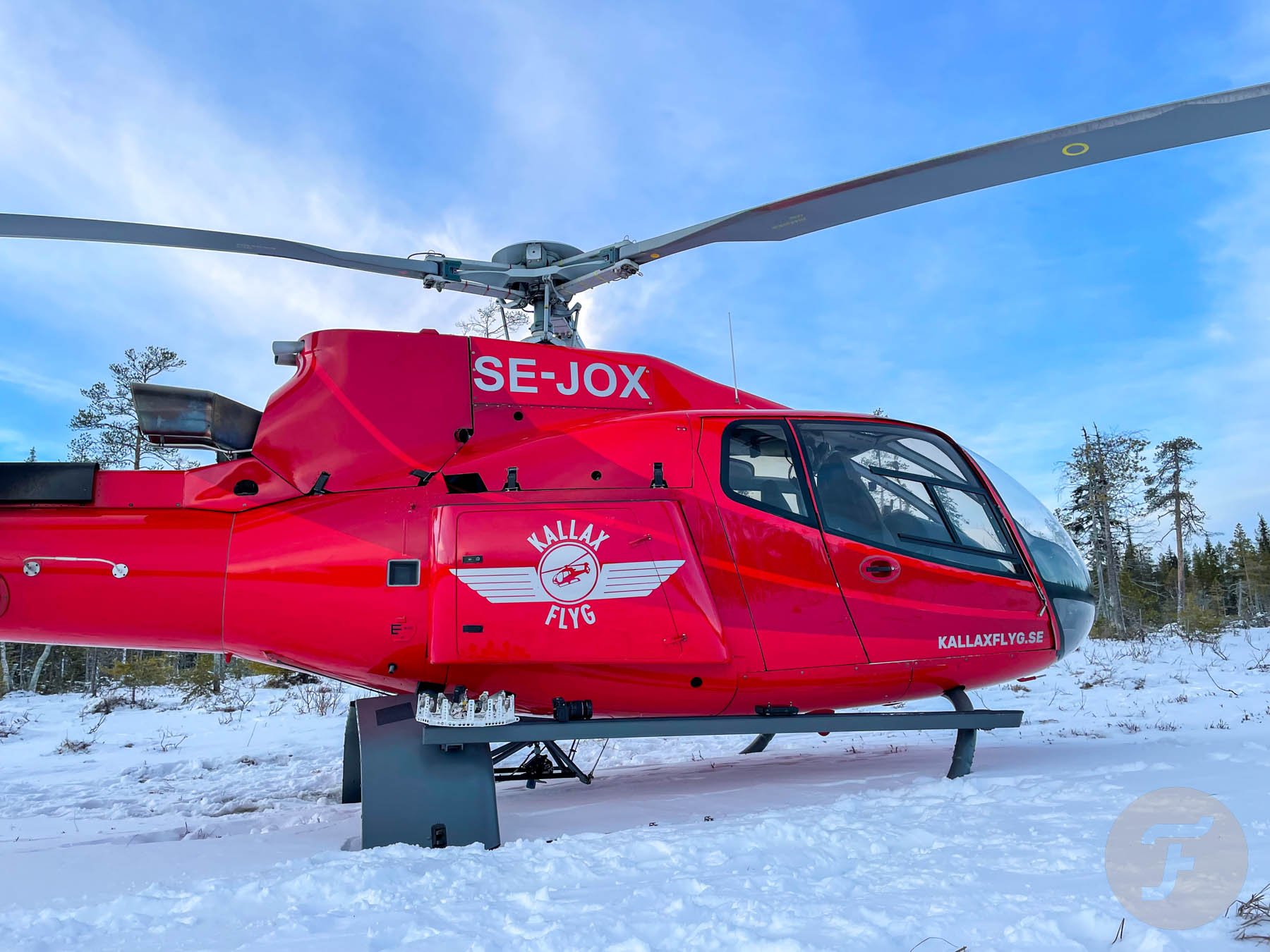 I’m not scared. I’d asked myself whether I was scared on the way down to the landing/take-off area. I rarely stop to ask myself how I actually feel about anything, but I thought that was a good moment to pay it some mind.

Six years ago, I had been mortally terrified of flying. My three-year stint with NOMOS, which included around 300 flights, put me through all kinds of ropey ones, terrible storms, three hurricanes (two on one flight), and shoddy landings. Needless to say, it cured my fear of regular commercial air travel. In September, Fortis put my life in the hands of brand ambassador Marc Rollier, pilot of the Turbine Legend plane. That took me by surprise but turned out to be one of the best experiences of my life and one that I hope to repeat soon. And now I’m confronted with a helicopter flight, with all the recent horror stories in the news floating through my mind. 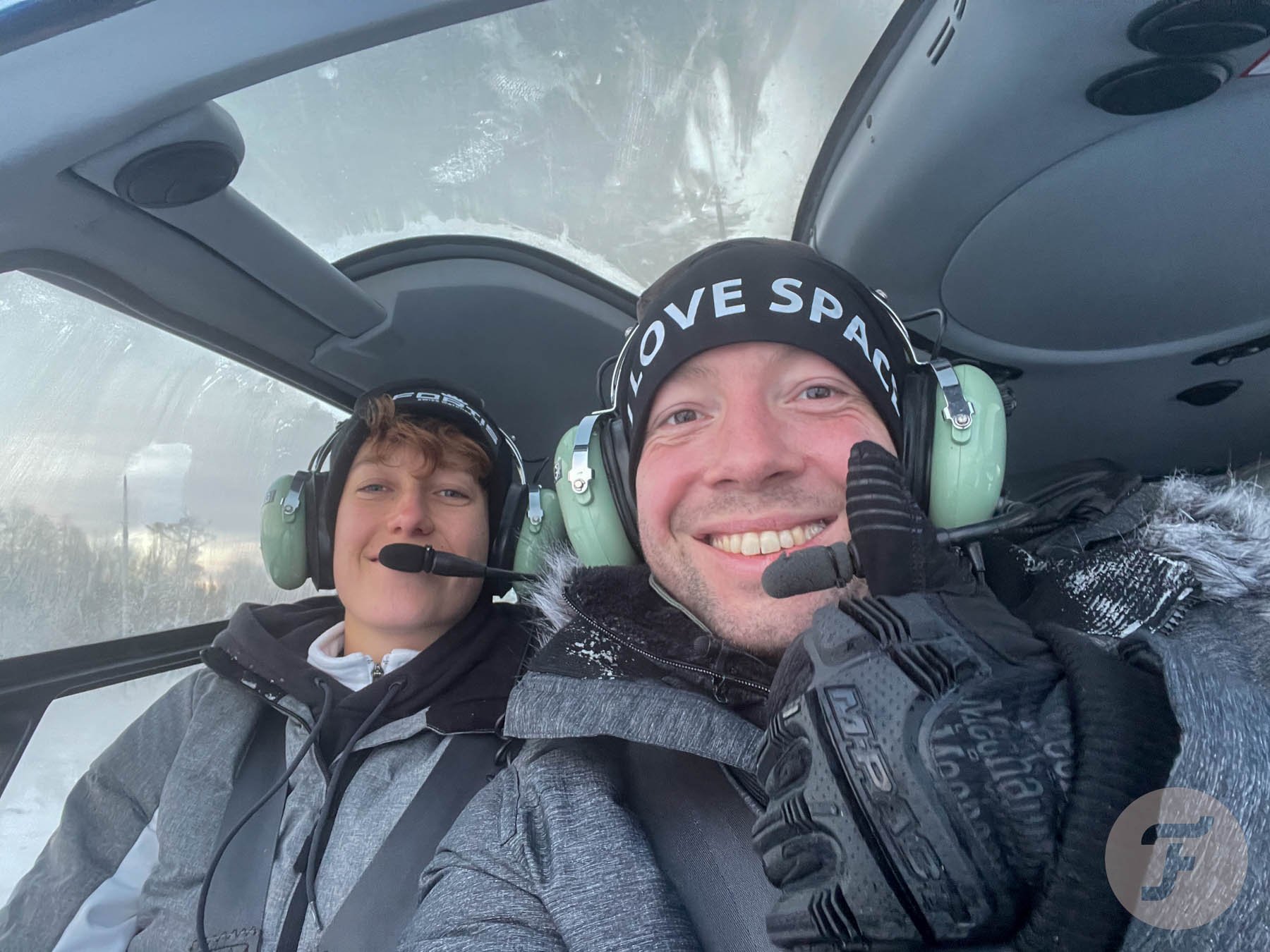 And yet, quite bizarrely, it didn’t bother me at all. Perhaps I have learned to resign myself to my fate. Perhaps I learned early on never to say no to an awesome experience so many people don’t get offered. Maybe, I actually like flying now. Maybe I want to fly in as many different vehicles as I can before my time comes. Why not? I’m a “pilot”, after all.

I decide to place my faith entirely in our experienced captain. His nonchalance is soothing. We take off as if being on the ground had been the weirder of the two states. It takes a few minutes for the windows to demist, but once they do, good gracious… 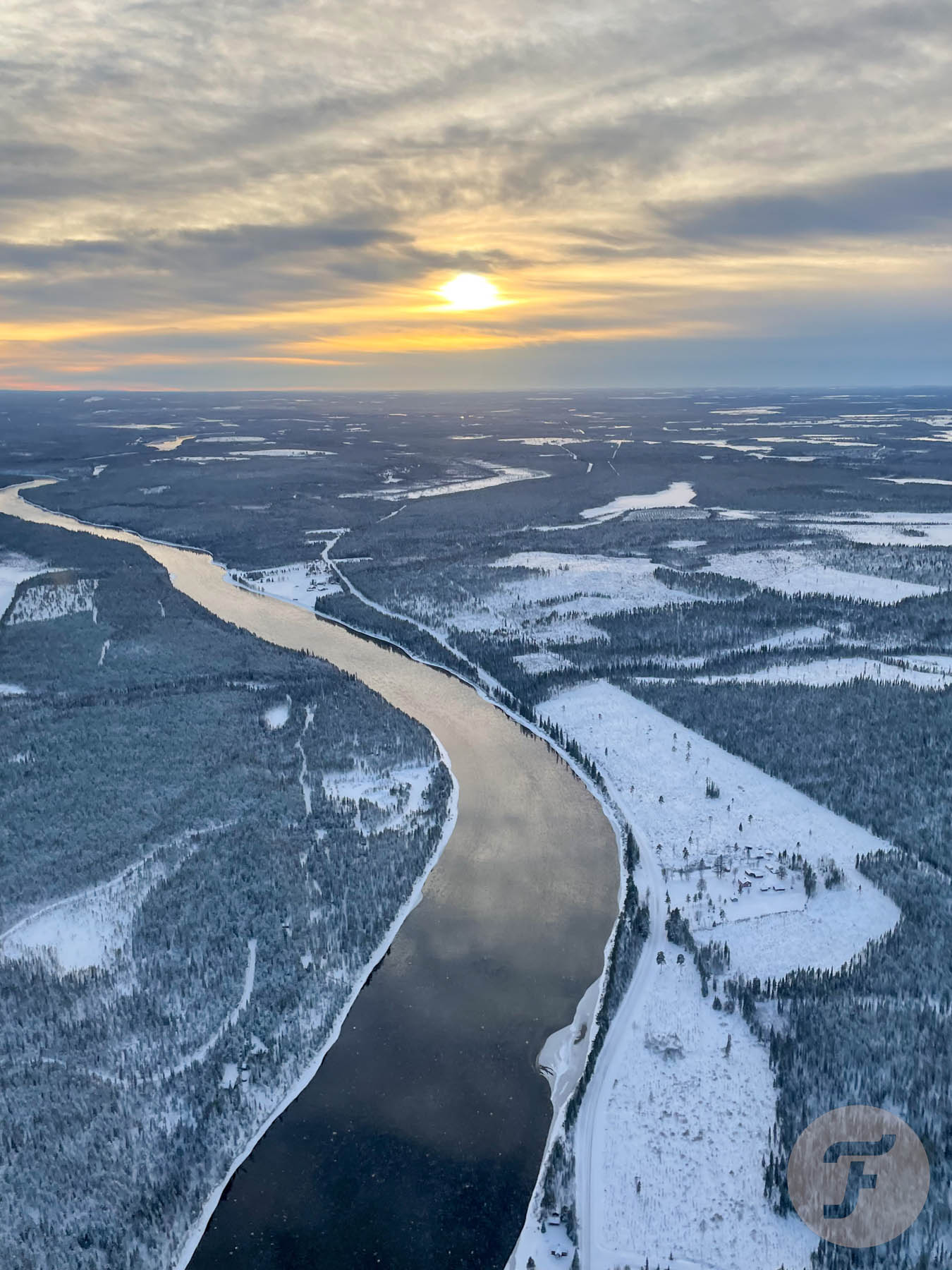 Flying at this low altitude is a very odd thing. You are close enough to see so many details. These are the things you only get to experience for a few minutes in a commercial flight when coming in for a low trajectory landing. In a helicopter, you remain at the same height almost exactly. You move slowly, with plenty of time to look around. With an almost entirely transparent hull, the views are around about 180 degrees from side to side, and another 80 degrees or so, up. The headphones deaden the rumbling of the blades and the whole thing is surprisingly relaxing.

After about 40 minutes, we find ourselves approaching the landing spot. We have a tracking device fitted to the payload so we’re able to locate it within about ten meters, but we have to fly in circles around one portion of the forest before we spot it.

There it is. Perched on the top of the tallest tree this side of the border (which we’d recently crossed and adjusted our watches out of respect for). Beneath us, Matze’s helicopter has already landed and we can see him unloading the camera equipment, while his accomplices ready the chainsaw.

We circle the payload a couple of more times to get a good lay of the land. We’ll have a close-to-ten-minute walk to reach it considering where we will be forced to land.

We touch down without incident. The icy snow beneath the skids buckles, cracks, and pops as we set the full weight of the helicopter down upon it. We wait for the blades to stop spinning and hop out of the craft. We’re caught between a state of jubilation and concern. We’re thrilled that the balloon made it all the way to 30,000 meters and that the payload correctly detached itself and made its way 99.9% of the way back to Earth, but we still have the small issue of felling a tree and recovering it intact before us. 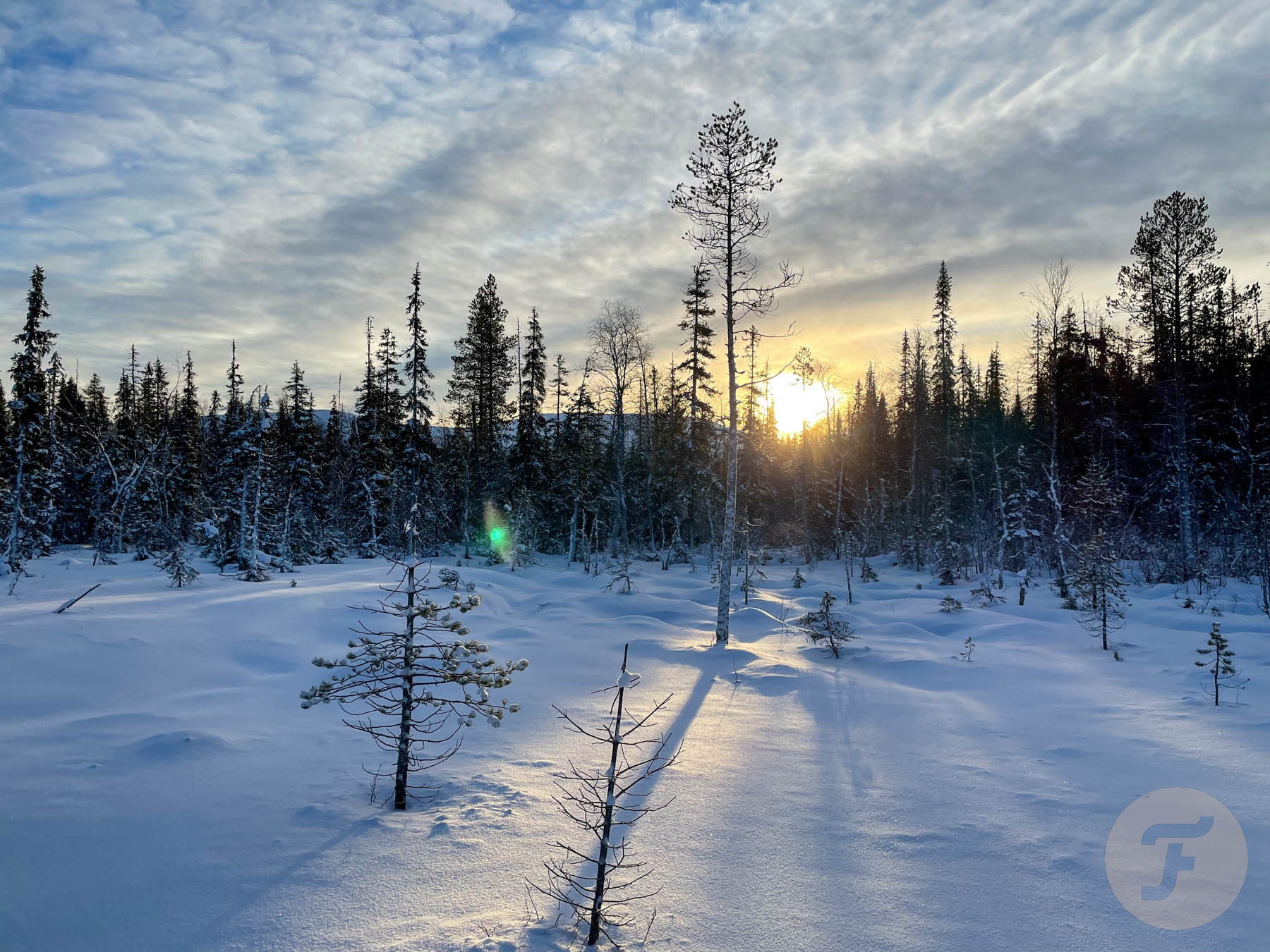 We spend ten minutes getting mic’d up for the journey and we begin. The knee-high snow boots Stefan had lent us were a godsend. Without them, we would have had some unconscionably cold feet to deal with and, in these temperatures, that’s no laughing matter.

While Andreas and I amble through the deep snow in jolly spirits, laughing and joking (and forgetting the mics were on more than once), I find myself feeling sorry for Kat and Matze, who are both lugging many kilos of equipment over this tricky terrain. However, they seem accustomed to navigating whatever they find underfoot, and our caravan of curiosity continues toward its destination apace. 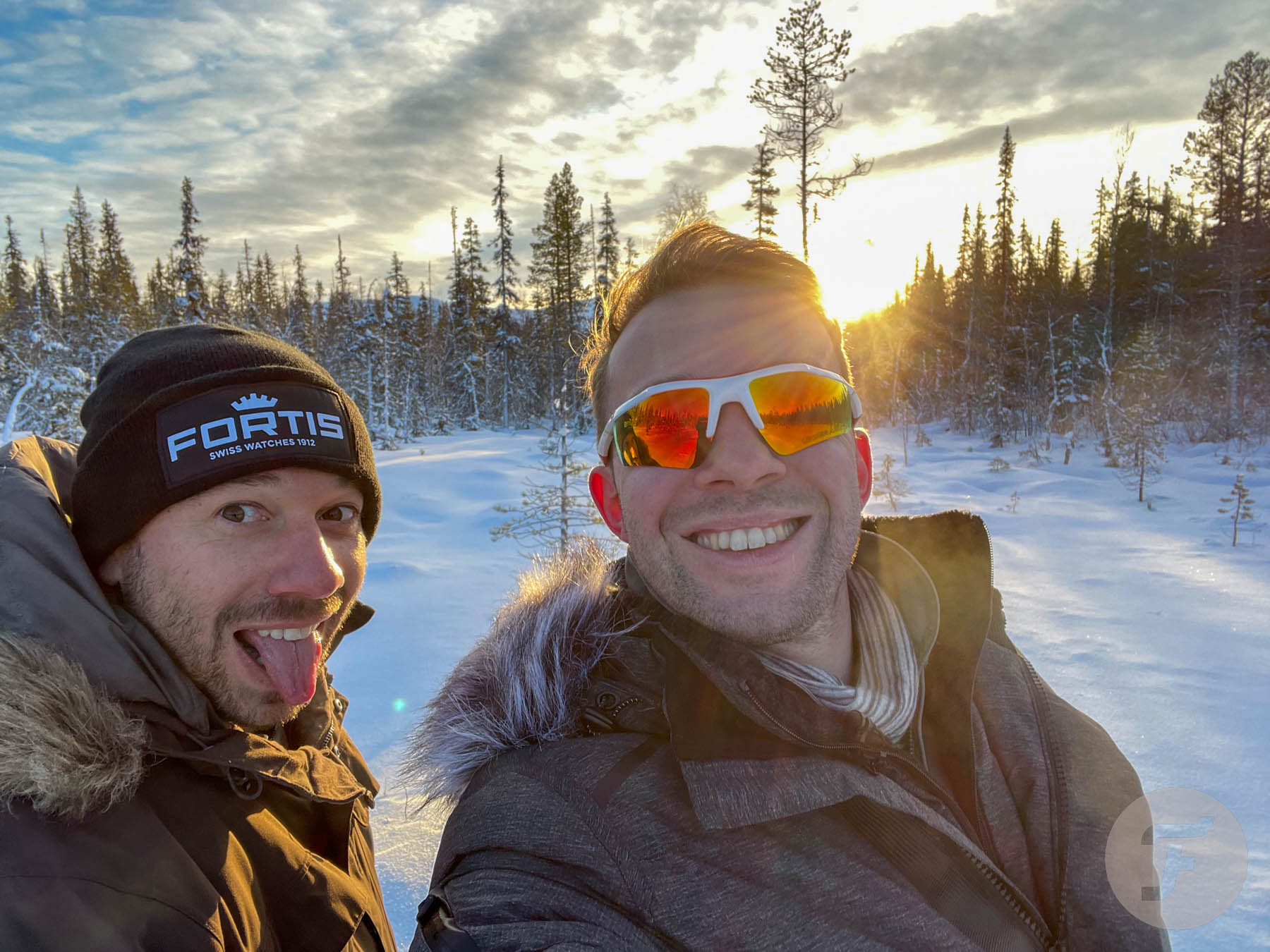 “We’re going to have to cut down two trees,” says Chainsaw. His name is actually Stefan as well, but to avoid confusion, I will just call him Chainsaw, which I doubt any man would object to being called. Luckily, for the sake of his pride, I didn’t derive his nickname from the size of his chainsaw. Otherwise, it would’ve been “Little Chopper”. What he is toting looks more like a Fisher-Price toy suitable for ages 3+ than it does a serious outback tool capable of felling mature pine.

It’s not the size of your chainsaw… Or is it?

Twenty-five minutes into Chainsaw felling the first tree, those concerns bear out. He turns to us and says (in a way that reminds me of Jaws), “We really could have done with a bigger chainsaw.”

He doesn’t get the sympathetic response I think he was hoping for. None of us have the first idea of what kind of chainsaw we should have brought along for the tasks, nor did anyone see what could be done about it now. Whether it took five minutes or five hours, those trees had to come down. The payload stuck atop the taller of the two was simply too valuable to science and watchmaking. And for anyone worrying about us chopping down trees willy-nilly, the trees themselves will be harvested and used for firewood, and Esrange will plant trees to compensate for the necessary felling of any tree that gives its life in the name of science. 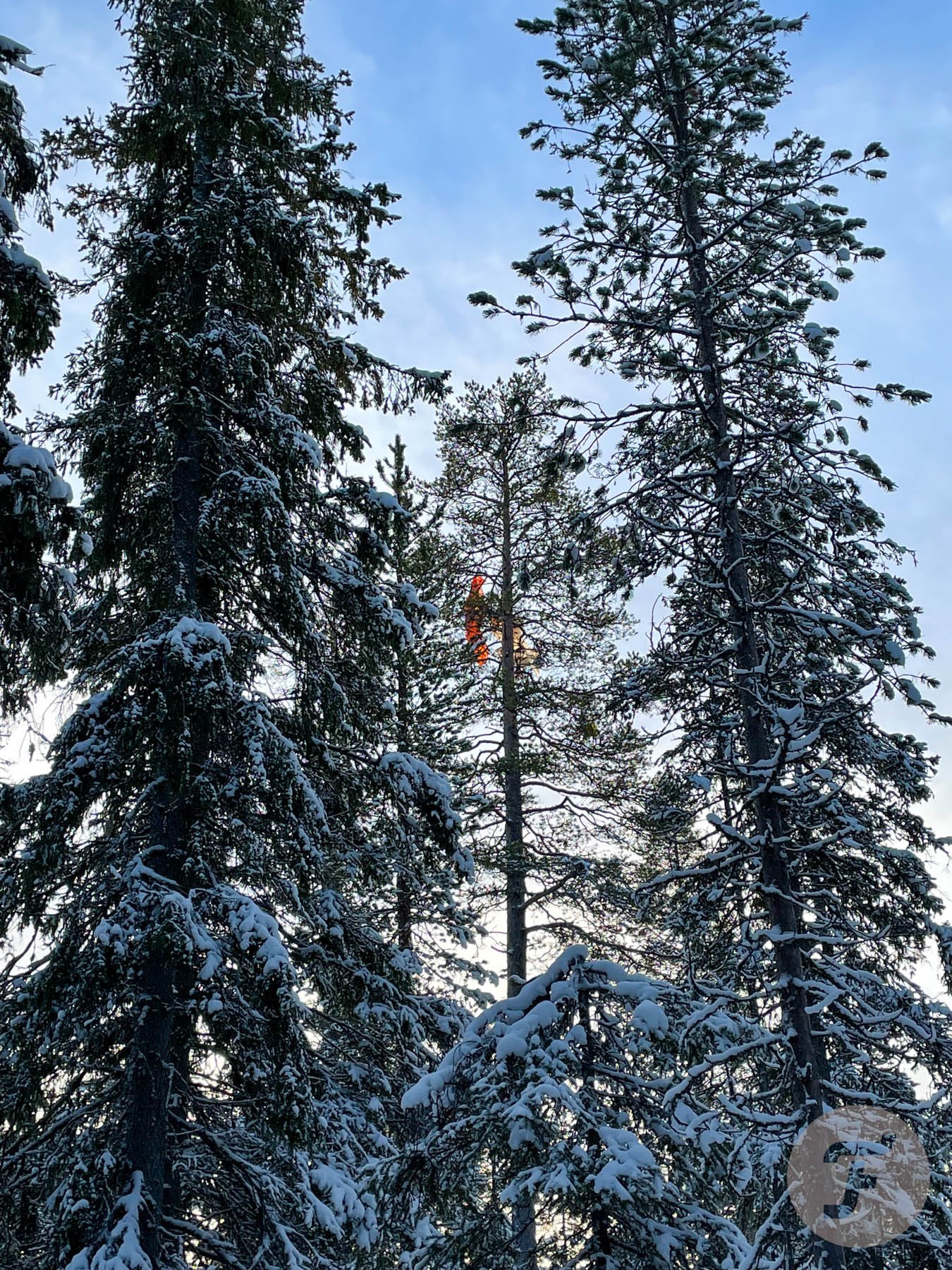 We take our positions behind distant trees. Becoming a pancake under a massive, felled pine is simply not on the agenda today. After a nervous wait, the spindly behemoths topple, and we scramble through the snow to inspect our precious cargo. 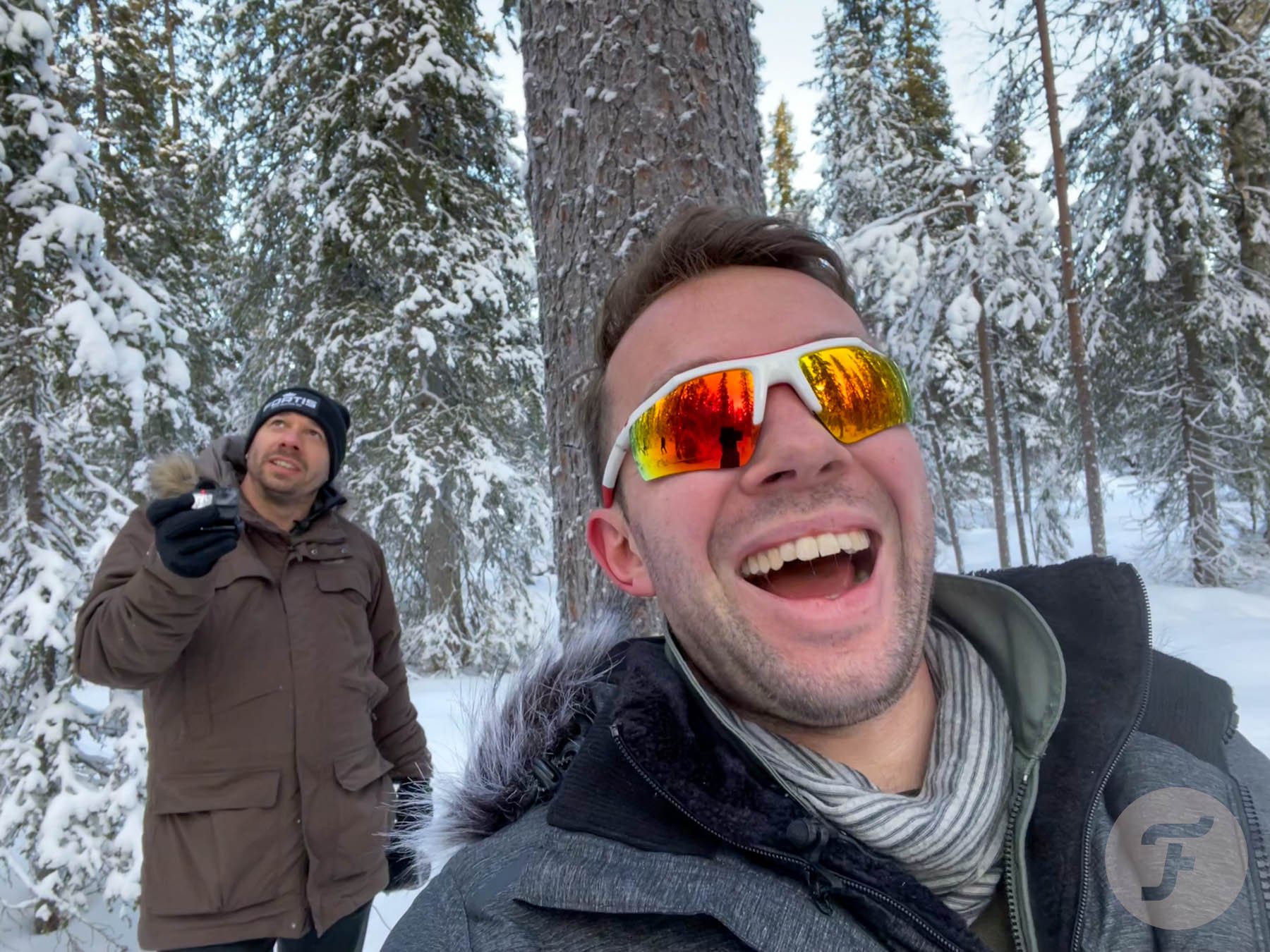 The moment of truth for our Fortis chronographs

There it is. In the low-slung sunlight of the Finnish tundra, the metallic gold housing of the gondola’s recording and navigation instruments winks at us from behind a tangle of branches. The white coronet which holds our thirteen chronographs rests on its side. It isn’t under the tree, per se, but it looks like it might have taken a serious knock as the timber fell.

Andreas is on his hands and knees in the snow. Everyone around him is chattering excitedly but he is noticeably quiet. Normally a ball of relaxed enthusiasm, there is a laser-focused tensity to this portion of the recovery. While everyone else stands and observes as interested onlookers, he is clearly more personally invested in the outcome of the experiment.

He doesn’t rush his checks. Quietly, he assesses each of the thirteen watches, mouthing notes to himself.

“What’s the verdict?” I ask, disrupting his silent thought.

“About half are running and on time. The rest… Well, we won’t know exactly what happened until we get them back to the lab and analyze the data and watch back the onboard video.”

“That one there,” I say, pointing at one of the stopped chronographs, “that one stopped about three minutes ago. I reckon the tree landed on it, no?”

Andreas checked it closely and examined the 2 o’clock pusher.

“Oh yeah, I guess that could account for that one! The dangers of stratospheric travel, eh? Who knew?”

We certainly didn’t. But we know more today than we did yesterday. Fortis, with Fratello’s backing each step of the way, will continue to research this area until the goal is achieved. And what is that goal? To define the parameters of accreditation that will be able to assess a timepiece’s suitability for travel to and use on the surface of Mars. That is the future we are working towards. That is the story we have become a small part of. I hope you, like me, are excited to see where this adventure takes us. If you are, stay tuned to Fratello. There is a lot more to come in the next twelve months and beyond. In the meantime, learn more about Fortis here.