Come with me if you want to live.
Rob Nudds
comments 23
Share

When I was a young watchmaker, the industry seemed enormous. There was so much I didn’t know. There were so many options available to me. It seemed impossible at the time to choose. My career and collecting habits could have gone in any direction. And while those habits have evolved over time, I will never forget where they began. They began with a Hamilton Khaki Aviation X-Wind Automatic Chronograph and the honest belief that complexity was king.

If you were to open my watch boxes now and assess the fare within, you might well accuse me of being a bit boring. Perhaps a bit safe. Several NOMOS watches, a demure Speedmaster, a selection of dive watches that do not stray too far from any of the well-beaten tracks upon which I’m sure to encounter many of you reading this article at one time or another make up the core of my collection… There isn’t that much that would blow your mind save perhaps the delightful LCF888 Chronograph from WH&T, or the box-fresh Casio Surfing Timer I picked up because of our very own Mike Stockton last year. 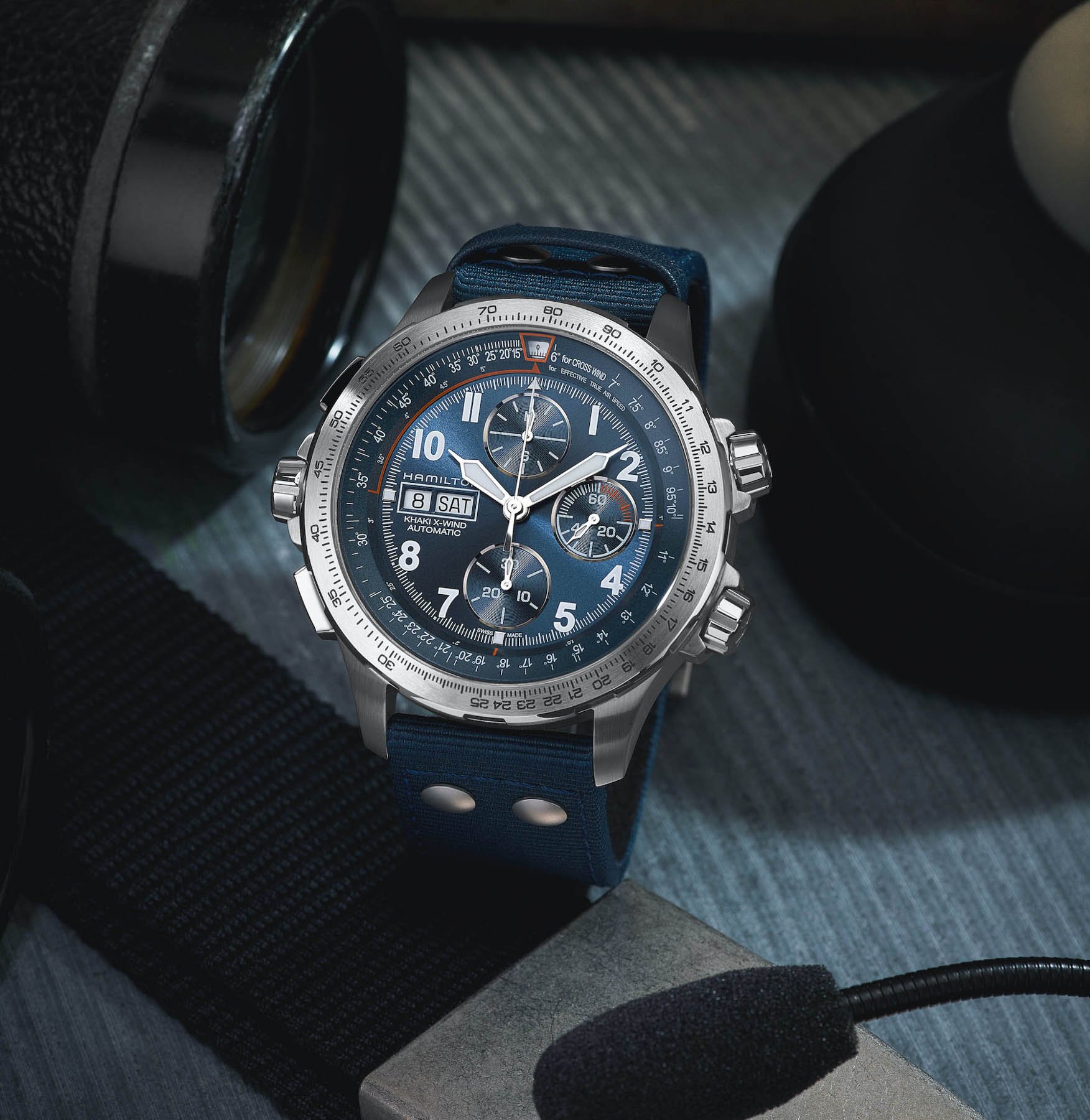 However, it was not always this way. Dial back the clock ten years and the collection looked very different. At that time, a big, bold, black and rose gold Hamilton X-Wind sat slap bang in the middle of my watch box — it was my pride and joy. That watch was a much-beloved companion for a couple of years. And, upon seeing these new iterations for the first time, my memories of that watch came flooding back. To say I’ve been hit by a wave of nostalgia would be no overstatement. To say I am considering buying my second Hamilton X-Wind would be a statement of fact.

If it was so cool, why did I sell it in the first place?

It seems odd to imagine now, as I gaze upon scores of watches, many of which unable to command a sliver of the wrist time afforded my old Hamilton X-Wind, but there was a time that I could not afford to own multiple watches. I first bought my Hamilton X-Wind when I worked for the Swatch store on Market Street in Manchester. I worked in that store for just shy of a year, leaving to take up my place at the British School of Watchmaking.

For the two years that followed, I lived on a shoestring budget. I worked an extra job to fund my dream of becoming a watchmaker. And, during that time, I sold pretty much everything I had. The X-Wind was a casualty of my career. I didn’t even process the emotional cost of it at the time. There was no question. I had a dream to achieve and that bonkers little watch helped me achieve it.

A few years into my watchmaking career, I had a bit of spare money, but I’d moved on from the Swatch Group and the X-Wind faded from my mind’s eye. Seeing these new iterations (especially the brown camouflage one, which has piqued my interest) has got me wondering how I’m going to justify another new watch to my darling Paramore. 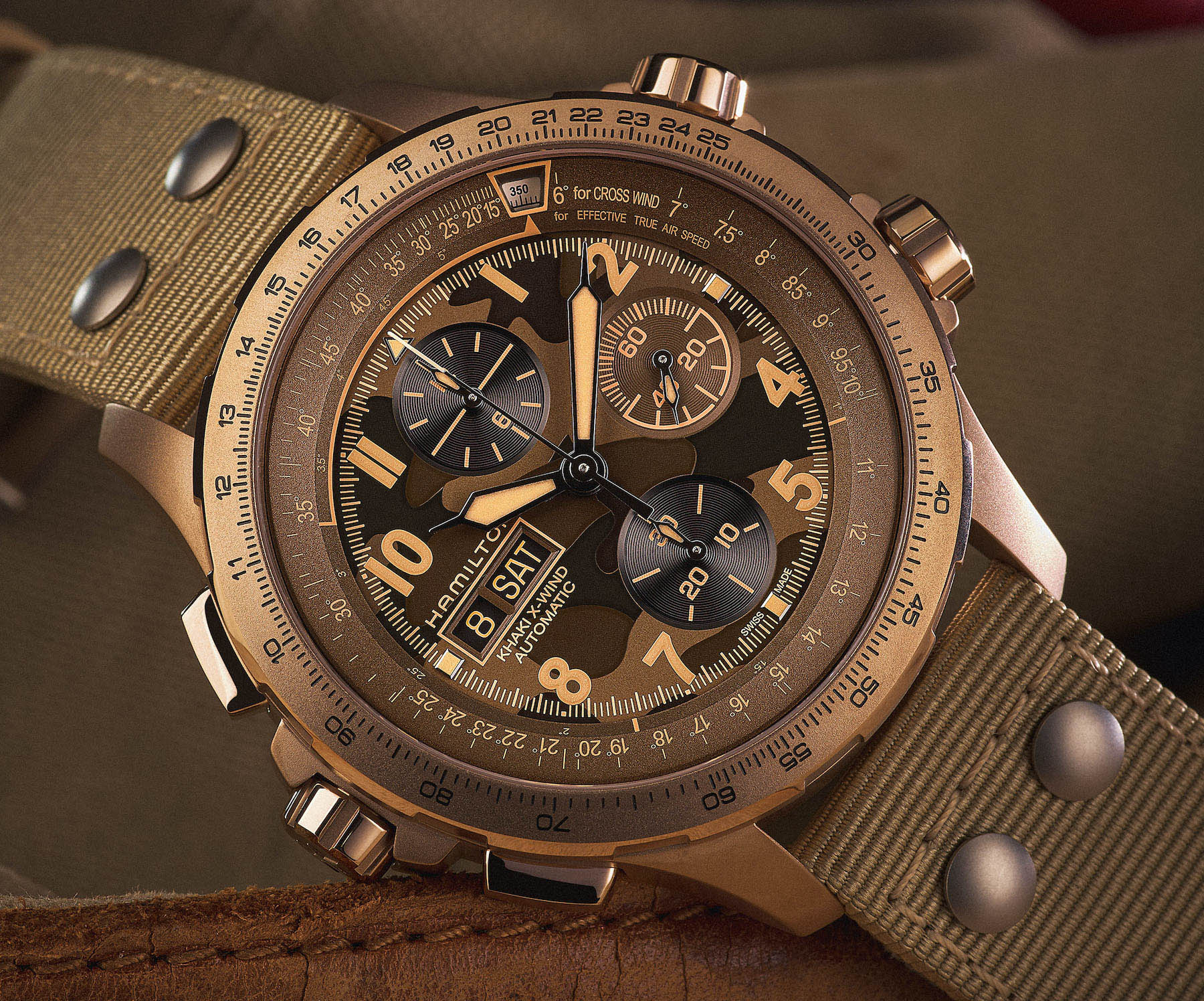 Maybe she’ll be convinced by the drift angle calculator like I was?

Funky functionality rules, okay! The X-Wind family’s main talking point is undoubtedly the drift angle calculator. This highly detail internal bezel performs a very specific function. It is gloriously useless for anyone with their feet on their ground. As a horological curio, however, it is almost unmatched at this price point.

On the right-hand side of the case, there are two, large, screw-down crowns. These can be unscrewed to operate the twin-level internal bezel (exciting!). The bottom pusher controls the upper inner bezel and the top pusher controls the lower level. So these two bezels help you land your plane (whenever you run into a significant crosswind).

How to land your plane

Next, I want you to call the nearest control tower/refer to your flight chart in order to obtain the wind speed and its direction. Let’s say, for the sake of this example, that the wind speed is 40mph, and it’s coming in at a 70° angle.

Rotate the upper inner bezel clockwise until the wind angle appears through the aperture that was at 12 o’clock (for 70 degrees this is just around 2 o’clock). Next up, you need to move the external rotating bezel (that’s right, it has one of those too). Find out your aircraft’s speed (180mph in this theoretical example), divide it by ten (18), and then line it up next to the red arrow of the upper inner bezel. 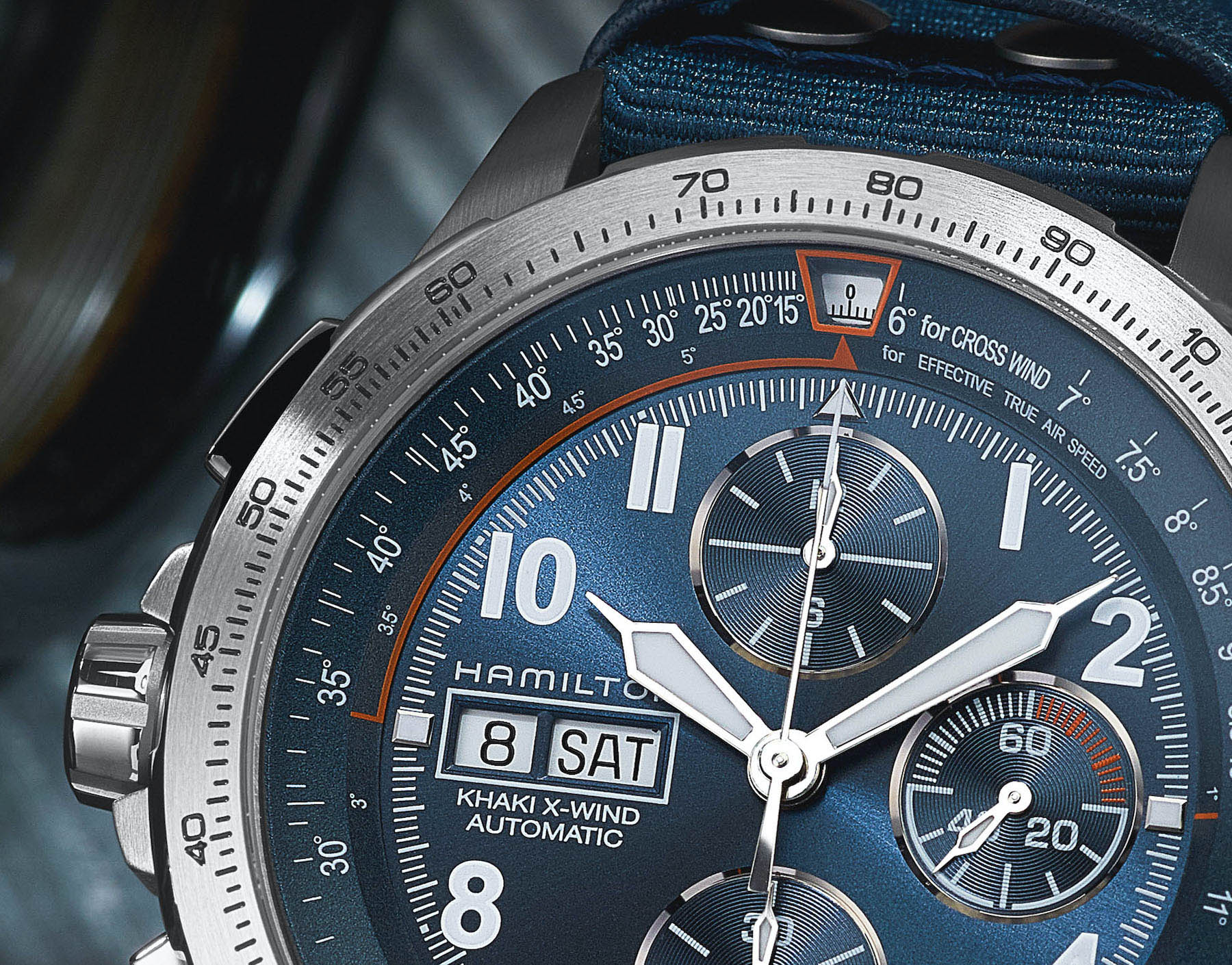 Turn the watch over in your hands. What do you see? Sure, you can see a little bit of the H-21-Si movement through a wedge-shaped display window. Don’t look at it. You’re in the middle of an essential calculation, remember? You can come back and check out its silicon balance spring and marvel at its 60-hour power reserve once you’ve successfully landed the plane…

Above the wedge-shaped window is a chart. You need to find the point at which the headwind component (40) intersects with the crosswind angle (30). I’ll cheat here and give you the answer: it’s 20 and from now on we will refer to this as the crosswind component.

Are you sure the landing gear is out?

Find the crosswind component on the external bezel. Don’t touch it! Don’t move it a single click! Just find it and then see what angle it lines up with on the upper inner bezel. In this example, the answer is 6.5°. This, ladies and gentlemen, is your angle of drift.

How is this going to help me land the plane?

Obviously, you want to land on the wheels of the plane, not on the wing, or the roof (do they call the top of a fuselage a roof? I dunno…), and, preferably, on the runway itself. In order to facilitate that (and your continued existence), compensating for this “drift angle” is essential so you don’t fall like Hans Gruber (inelegantly) to the Earth.

…the difference between a safe landing, and the awful demise of you, your crew, and all of your passengers.

Hamilton advises you make a note of this by selecting 46.5° to appear through the aperture of the upper inner bezel, but you could just as easily write it down, type it into your smartphone, tell a friend about it, or, I don’t know, make a special effort to remember the single number (to a maximum of one decimal place) that could mean the difference between a safe landing, and the awful demise of you, your crew, and all of your passengers. Your call. Either way, the X-Wind has done its job. 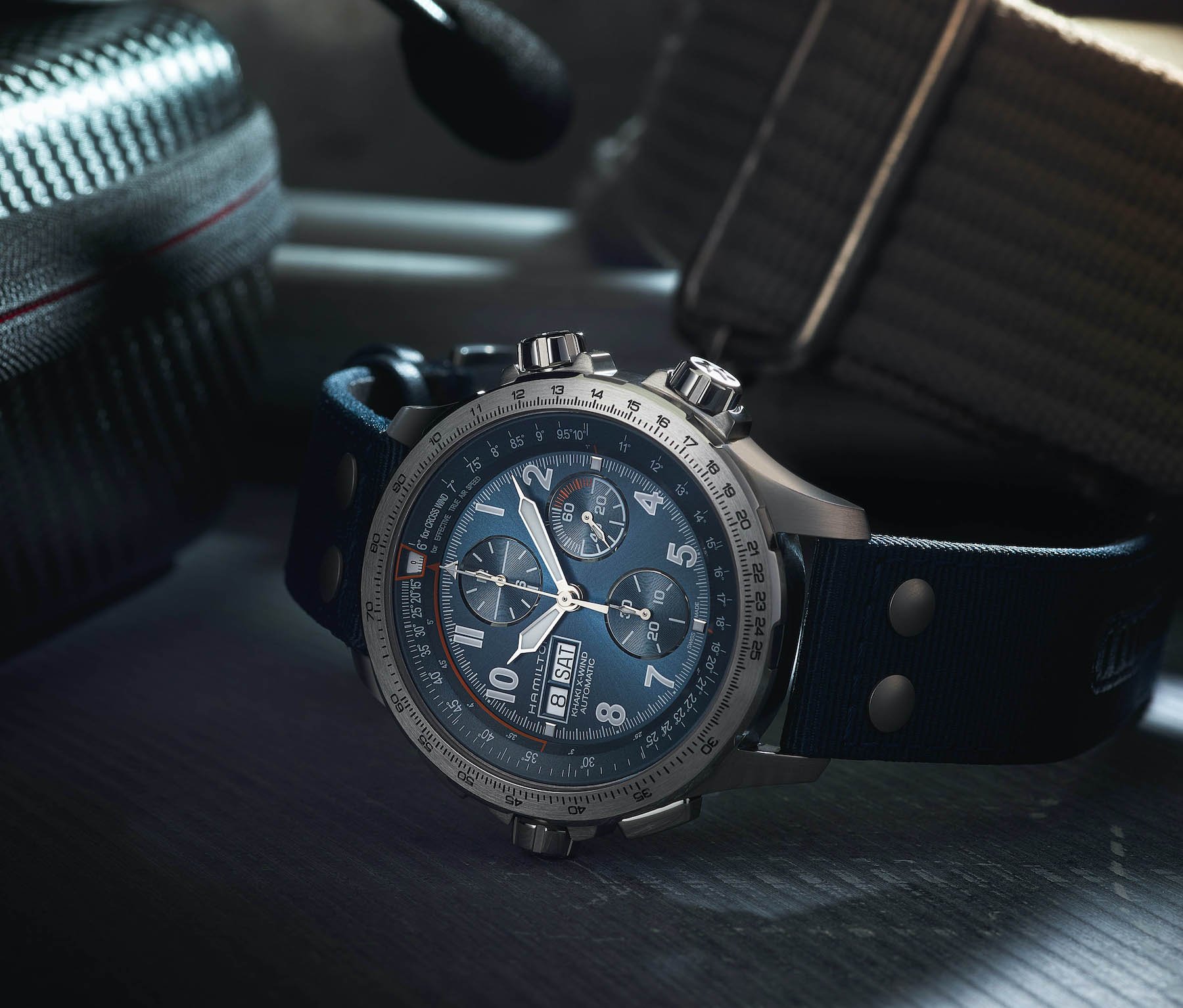 Don’t take this one speed-dating

Okay, I think we can all agree that this is a fascinating complication. And while it is a “conversation starter”, it is also a conversation in its own right. I love it. I’m a watch nerd. I think it is just totally crazy in the best way possible. It might be the single worst watch in the world to take speed-dating as if the person across from you notices you 45mm wide, 14.85mm automatic timepiece and asks about it, you have two choices: either you lie to them (bad start), or you tell them the truth.

Then again, perhaps it would provide the best litmus test of whether or not they were going to stick around… Reference H77906940 (that’s the blue one) retails for €1,945, while reference H77916920 costs €2,045. Those extra hundred sheets are almost certainly to cover the beige PVD case coating and the awesome camo print on the dial. The latter gets my vote and is a small price to pay for the eternal happiness it may well be able to secure me. Both are water-resistant to 100 meters, which is awesome if your date goes well and you decide to end it with a spot of skinny dipping. You see? The Swatch Group has your back. These models will be available in June. Check the official Hamilton website for updates here.