The History Of Citizen Dive Watches — Images From The Archives

For many of Fratello’s readers, the name Citizen will be a familiar one. Not only because the brand enjoys a voluminous presence in the windows of high street and shopping mall boutiques around the globe, but also because it is a company with a long and exceptional history, which began over one hundred years ago, just outside of Tokyo… 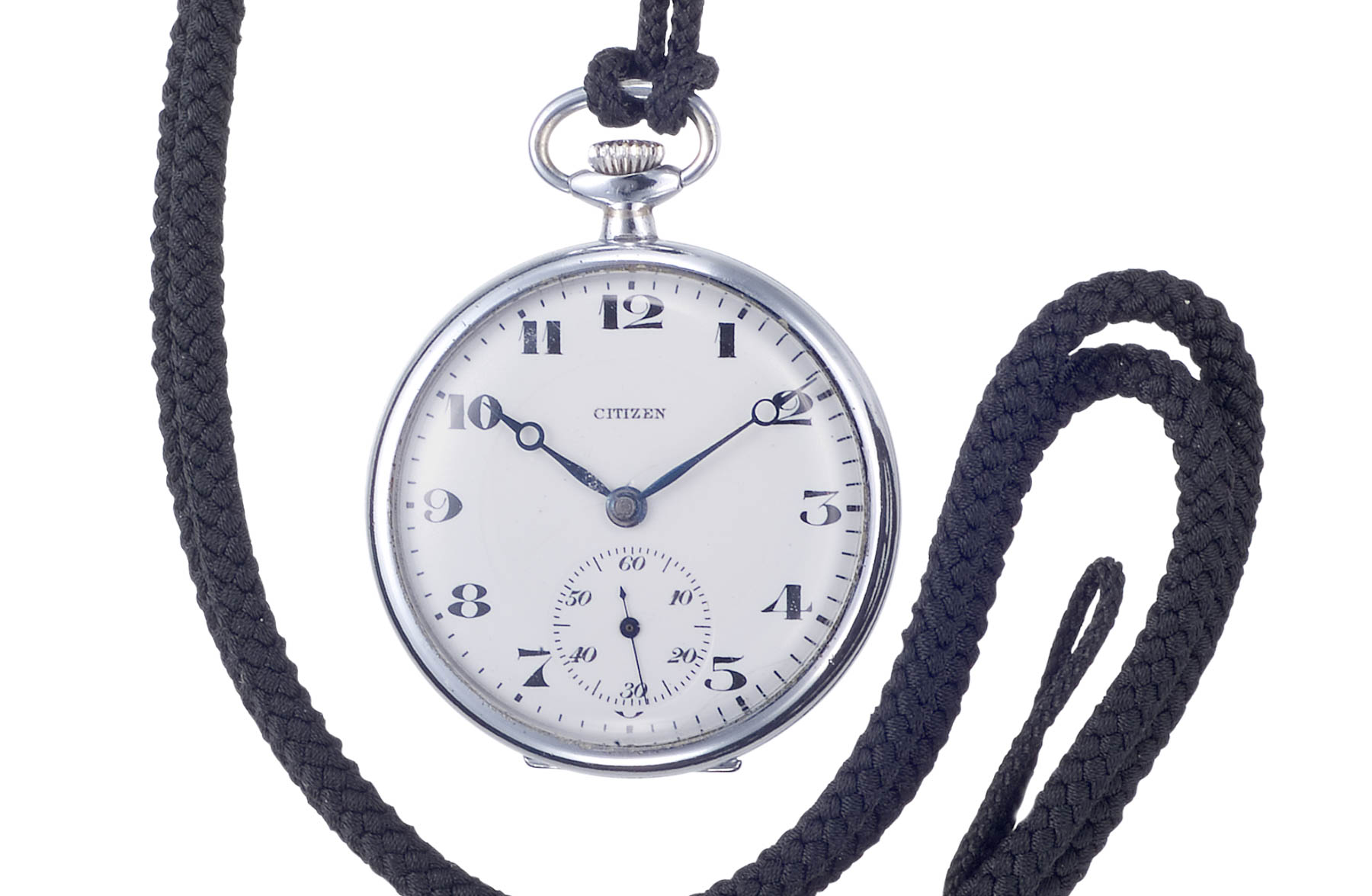 Just six years after foundation, the first watch rolled off the production line. A fine pocket watch, the then-Tokyo mayor Count Shimpei Goto named the watch “Citizen” in the hope it would be loved by many citizens for years to come. Soon after, on May 28, 1930, the name given to the watch was adopted for the establishment of a new company, Citizen Watch Co., Ltd.

A shock to the system

Citizen continued to grow over the next 30 years. In 1956, the brand presented the first Japanese watch with Parashock technology. Citizen held public demonstrations to highlight the efficacy of Parashock’s shock-proof mechanism. In one instance, the Parashock-equipped watch was dropped from a helicopter hovering 30 meters above the ground. The watch crashed to the ground, landing on the street in front of a department store. Needless to say, its operations were checked and found to be in order.

The Parashock concept of safeguarding against impact led directly to today’s shock counteraction function, where the second hand never skips even when a Citizen watch is hit. 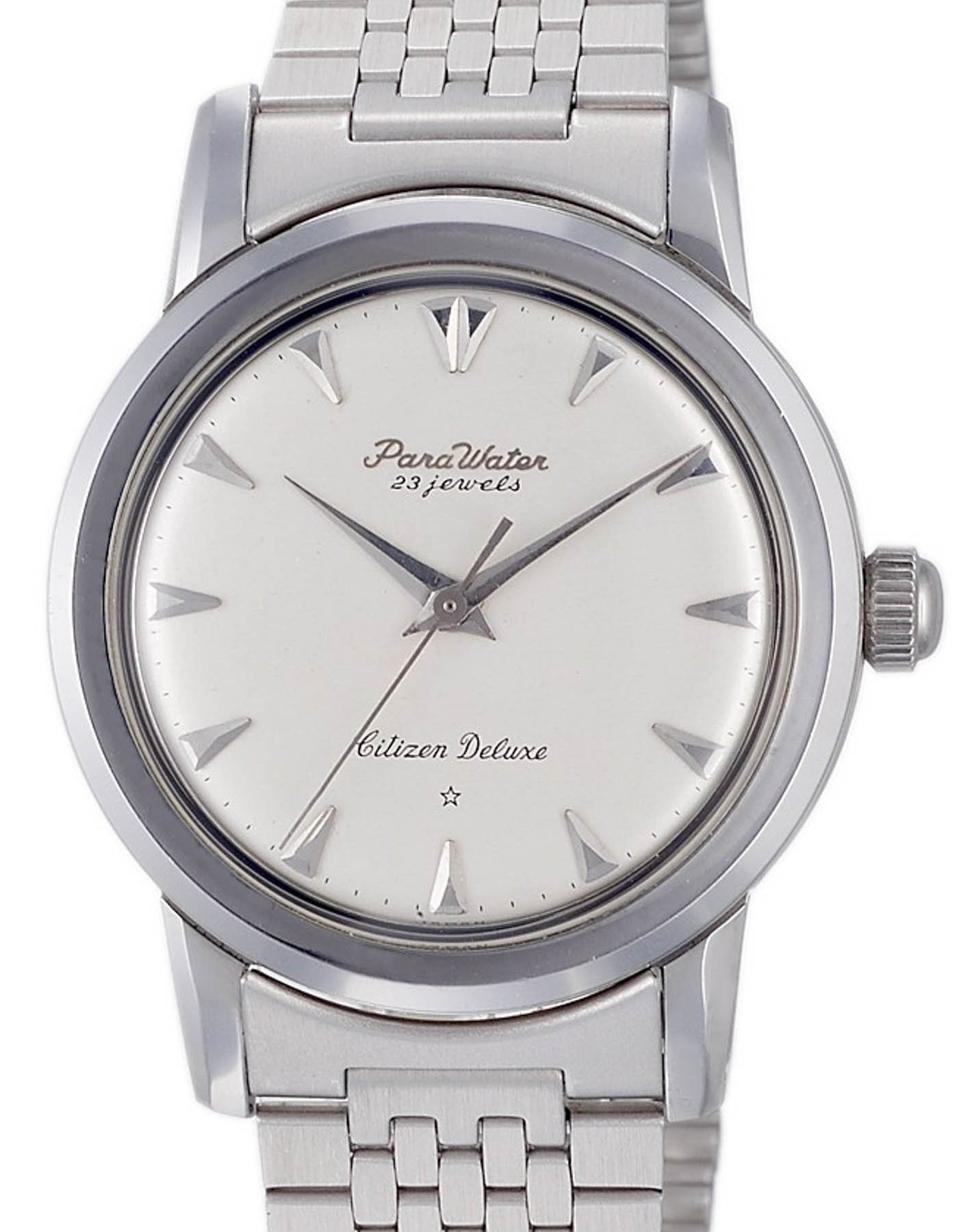 Three years after the headline-grabbing Paraschock demonstrations, Citizen unveiled its Parawater technology. Parawater was the forerunner of all the water-resistant watches Citizen manufactures today. It achieved water resistance through special O-ring gaskets used to seal the glass, the back cover, the jointed parts of the body, and the crown. Moisture (along with dust) is the arch-enemy of the watch, but Parawater neatly solved both problems.

Since 1963, Citizen has conducted tests to have its Parawater wristwatches cross the ocean, both to demonstrate its water resistance and to carry out tidal research. In the first test conducted to cross the Pacific Ocean, 100 buoys with the wristwatch attached were launched into the ocean from ships in three waves. The buoys then rode the Kuroshio Current as part of a large-scale experiment to traverse the Pacific. To encourage international friendliness and goodwill, letters from Japanese junior high and high school students were also enclosed in some of the buoys. Three years later, in 1966, one of the buoys was found off the coast of Manzanita in the U.S. state of Oregon. All the watches that were finally collected operated normally, and proved the Parawater’s water-resistant qualities. 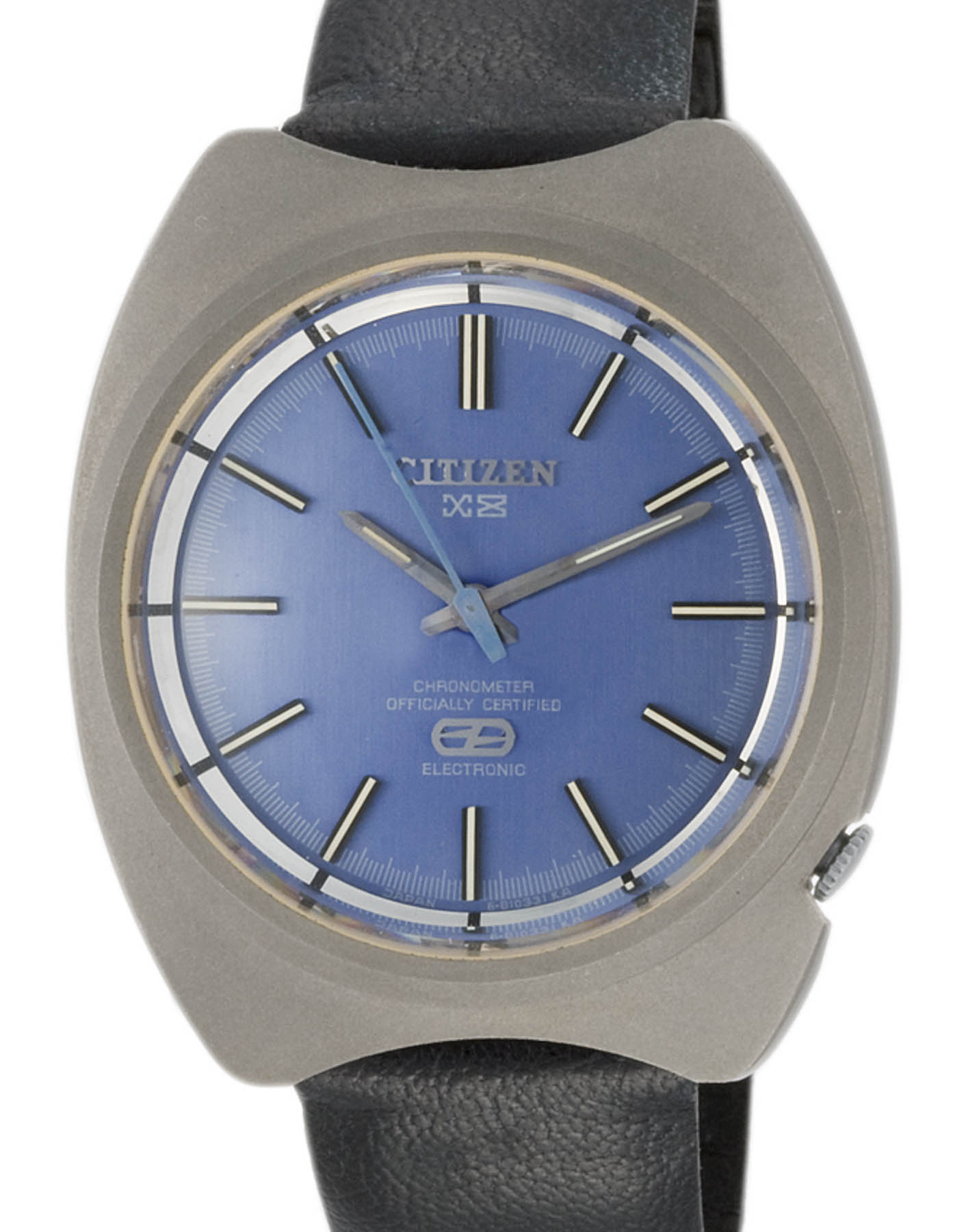 With its 99.6% solid titanium case, the X8 Chronometer was a groundbreaking model for its time. It defined an epoch by applying titanium — a futuristic material glamorized by its crucial role in the Apollo 11 moon landing — to the everyday wristwatch. The X8 Chronometer was Citizen’s last electronic product to get official certification from the Japan Chronometer inspection Institution. It was manufactured for a short time and sold fewer than 2,000 units. As such, it’s become rather sought after by collectors. 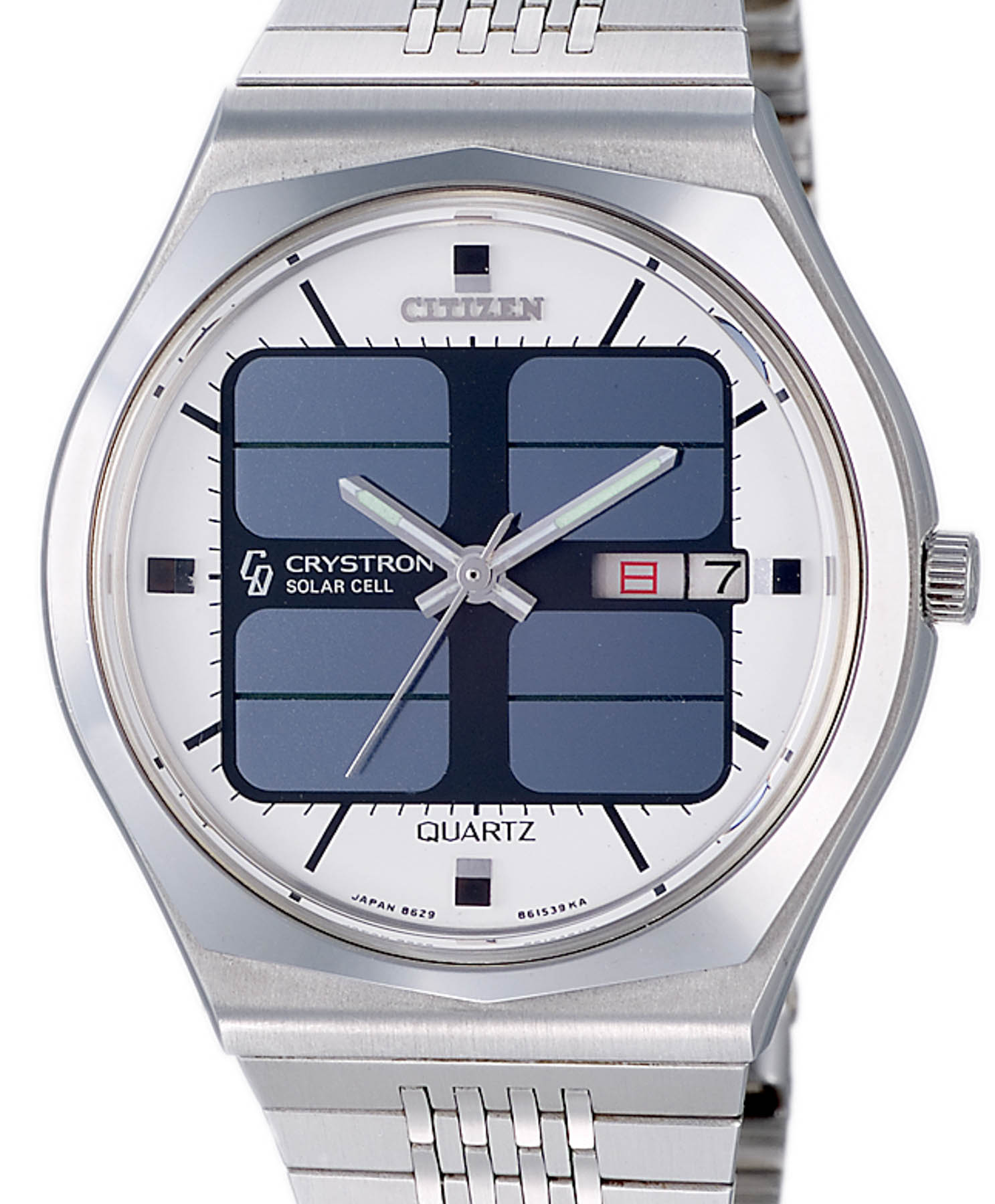 Eight single-crystal solar cells arranged on the dial to charge a secondary battery made the Crystron Solar Cell the first every light-powered analog quartz watch. Nowadays there is widespread awareness of environmental issues, but Citizen was quick to wake up the problem and to develop a product that could be powered by light and that did not require battery replacement. Light-powered watches have become a cornerstone of the brand and Citizen is regarded as one of the most accomplished and experienced makers in this field. 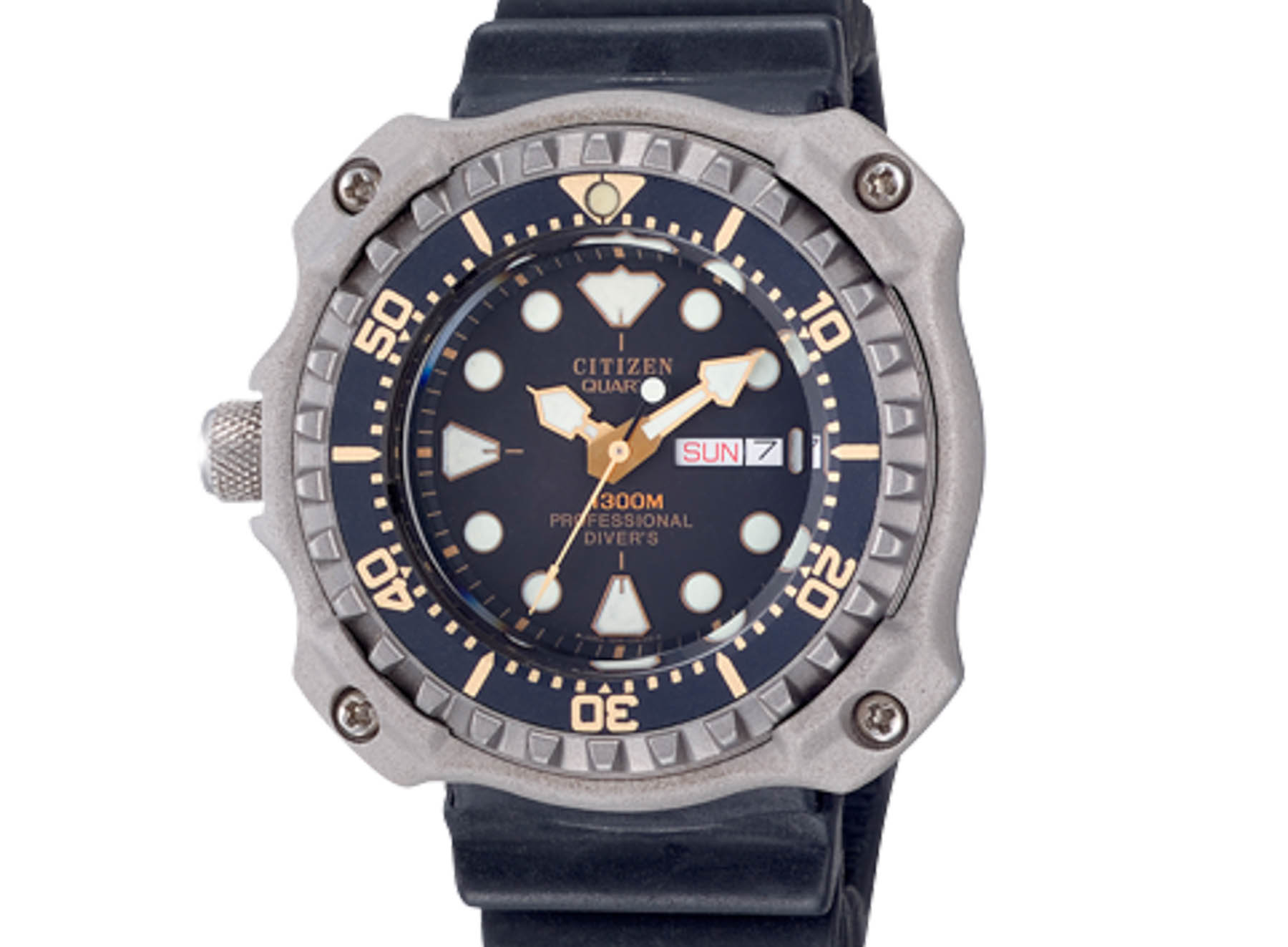 This pressure-resistant, 1,300m diver’s watch stood in a class of its own upon release. Featuring a no-rust titanium case, the ultra-airtight construction of the watch was designed to exclude helium gas. Emphasizing functionality while diving, the watch crown was placed at the 9 o’clock position. For clarity’s sake, a “no-decompression time chart” was printed on the band.

The next year, a self-winding diver’s watch, considered a forerunner of the PROMASTER series, was found on Australia’s Long Reef Beach. Although the body of the watch was covered in barnacles and other matter, the internal structure was still operating normally, having quietly continued to keep time for six years while at sea.

The first Aqualand debuted in 1985, becoming the first quartz watch to incorporate an electronic, digital depth gauge. It was the traditional style 200m diving watch fused with cutting-edge technology. With its great functionality, it became one of the most beloved watches all over the world. 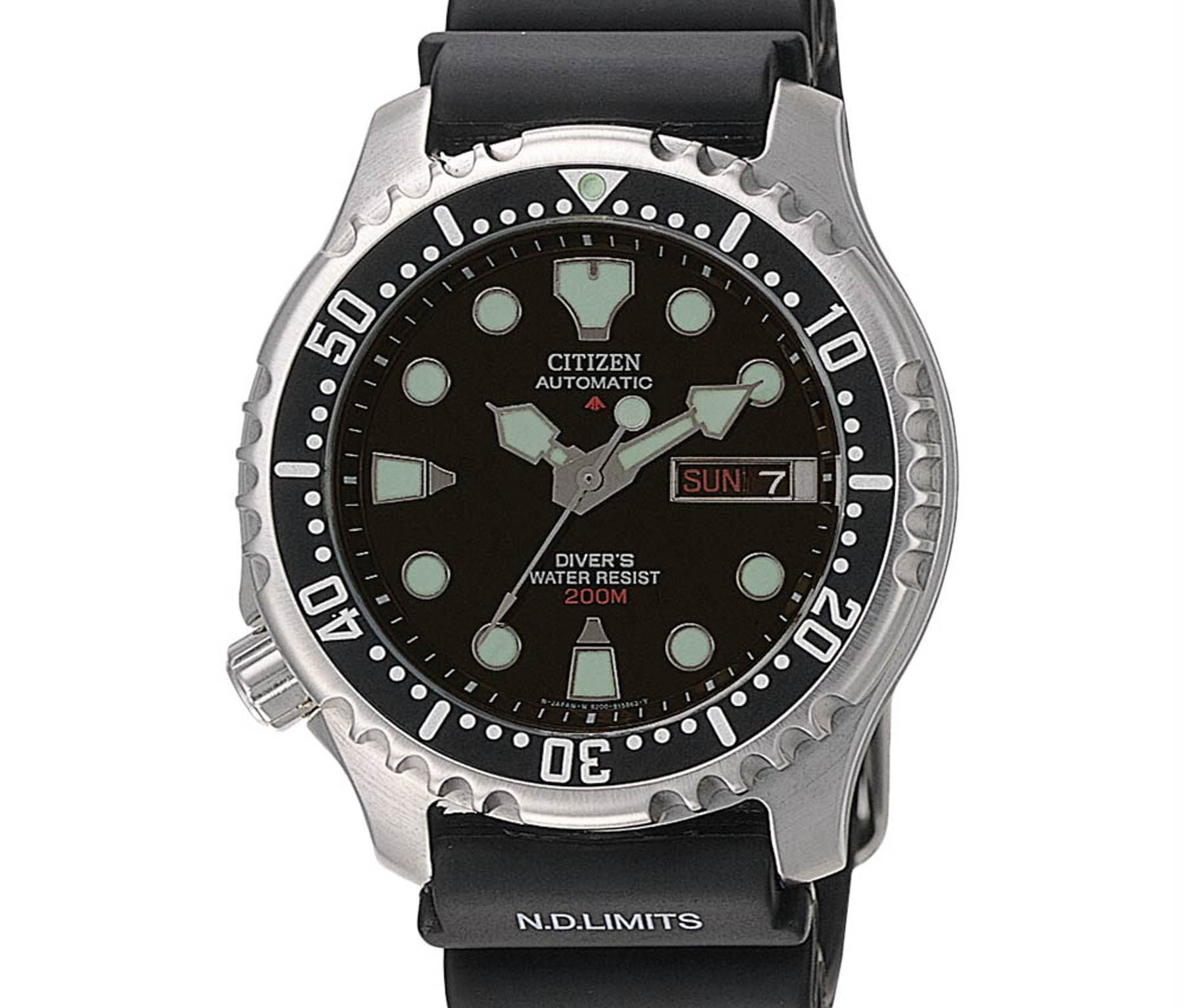 The original model NY0040-09E was beloved by fans for its functionality and affordability. The original model was equipped with an automatic movement Cal.8203, and its design was informed by consumer feedback. Several variations of the model have since been issued with new case sizes and new movements including Eco-Drive. 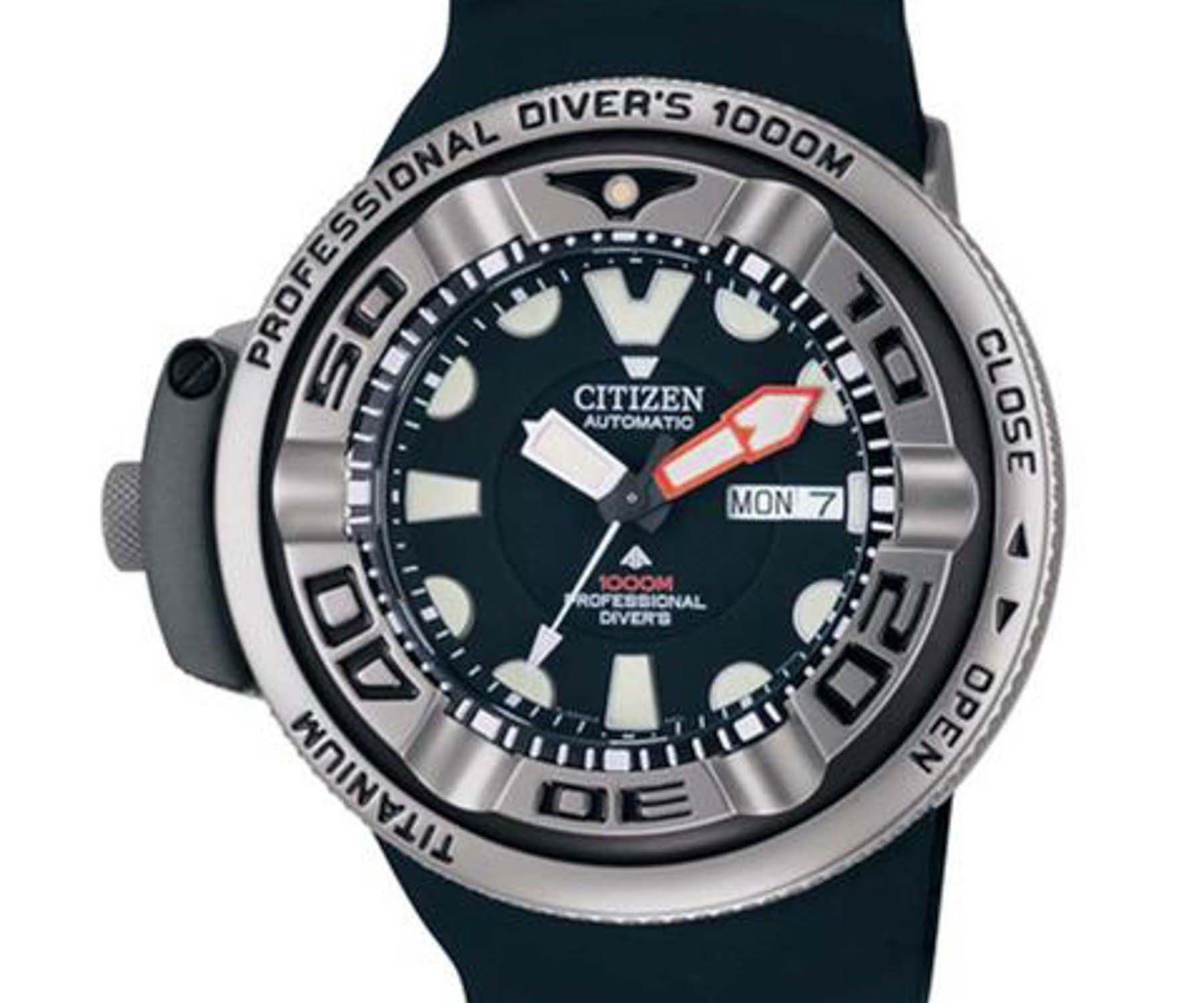 Just after the turn of the century, Citizen released a Diver’s watch for saturation diving. It featured a helium-excluding airtight structure and a movable/removable bezel. This mechanical diver’s watch is perfect for saturation diving to depths of up to 1,000 meters. The airtight structure of the watch protects inner components from the helium gas used during saturation diving. Additionally, the movable and removable bezel makes it easy to wash out matter like salt and sand. These and other authentic features help the watch stand up to use by the most demanding professionals. Along with a circular case, the titanium materials are finished with Citizen’s proprietary Duratect surface-hardening technology. 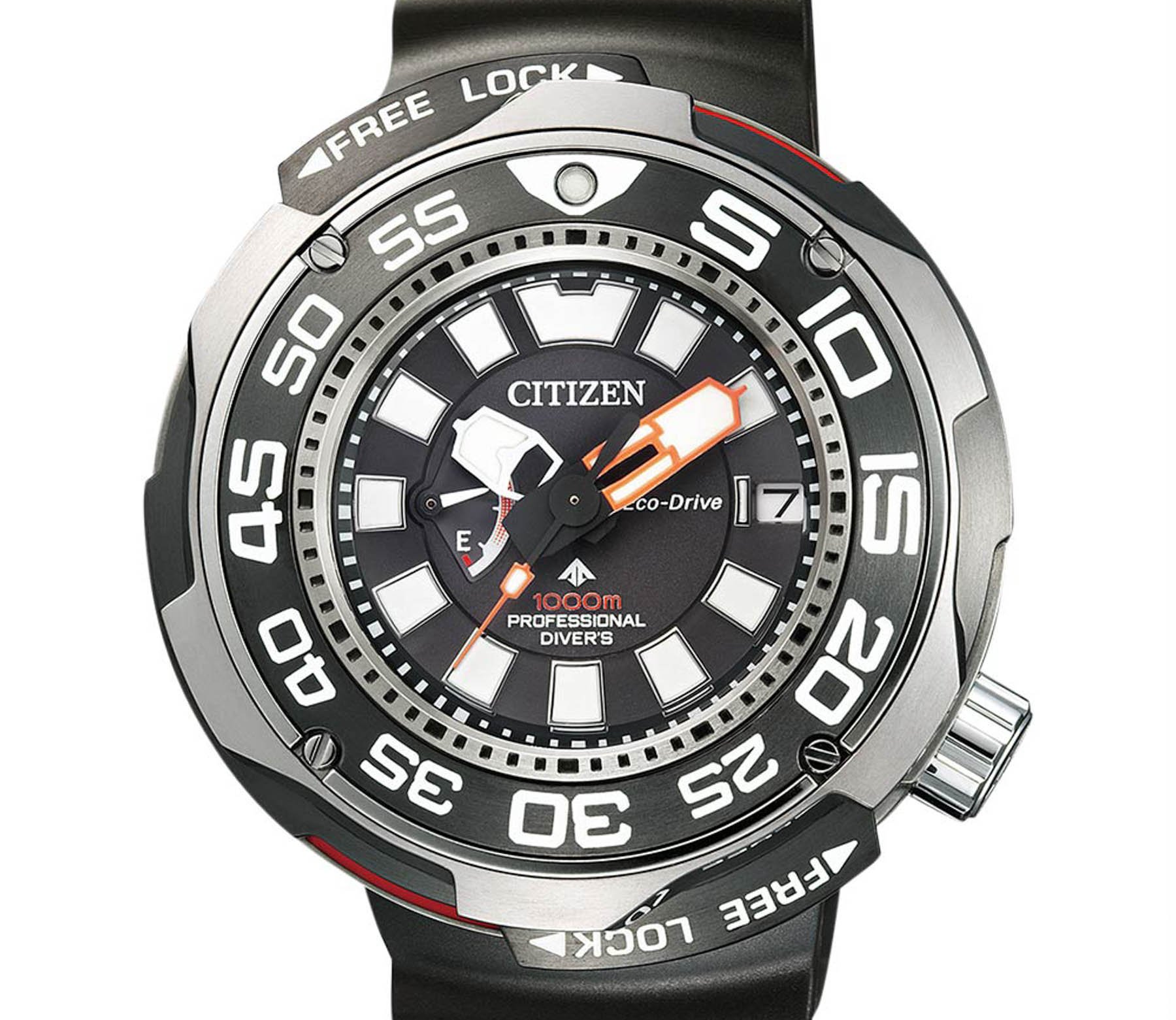 The name says it all. The watch boasted water resistance for saturation diving down to 1,000 meters with a solar-powered Eco-Drive movement. This 2016 release was dedicated to the professional divers as a perfect tool watch. It is certainly one of the brand’s most striking pieces in the catalog and makes a clear and present statement about the direction the brand plans to take with its diving tools in the future.