The F-43 has returned to base. Why? Because it’s come home to welcome the brand’s newest recruit to an evergrowing aerial squadron. The Fortis Flieger F-43 Bicompax was well-received, lining the nest for its smaller, but no less impressive brother. For quite some time, Fortis fans have been calling for something a little smaller, a little lighter on the wrist, and a little bit special. With the launch of the time and date Fortis Flieger F-series in 41 and (a satisfying) 39mm, all three prayers have been answered.

The Fortis Flieger family first emerged in 1987. Since then, subsequent models have followed the same code: Live simply; live well. The beauty of these Fortis watches is in their pared-back confidence. Nothing superfluous remains, and even the most arresting design flourish (and by that, I am referring to the “Synchroline” at 12 o’clock) has a function.

In a crowded marketplace, creating something identifiable is hard work. Annoyingly, for everyone else still in the process of undertaking the necessary labor, a successful end product often looks like it required anything but. In fact, it looks simple. It looks obvious. To the untrained (and even experienced) eye, the design of the Fortis Flieger F-41 and F-39  models looks so comfortable, it is as if it could never have been any other way. 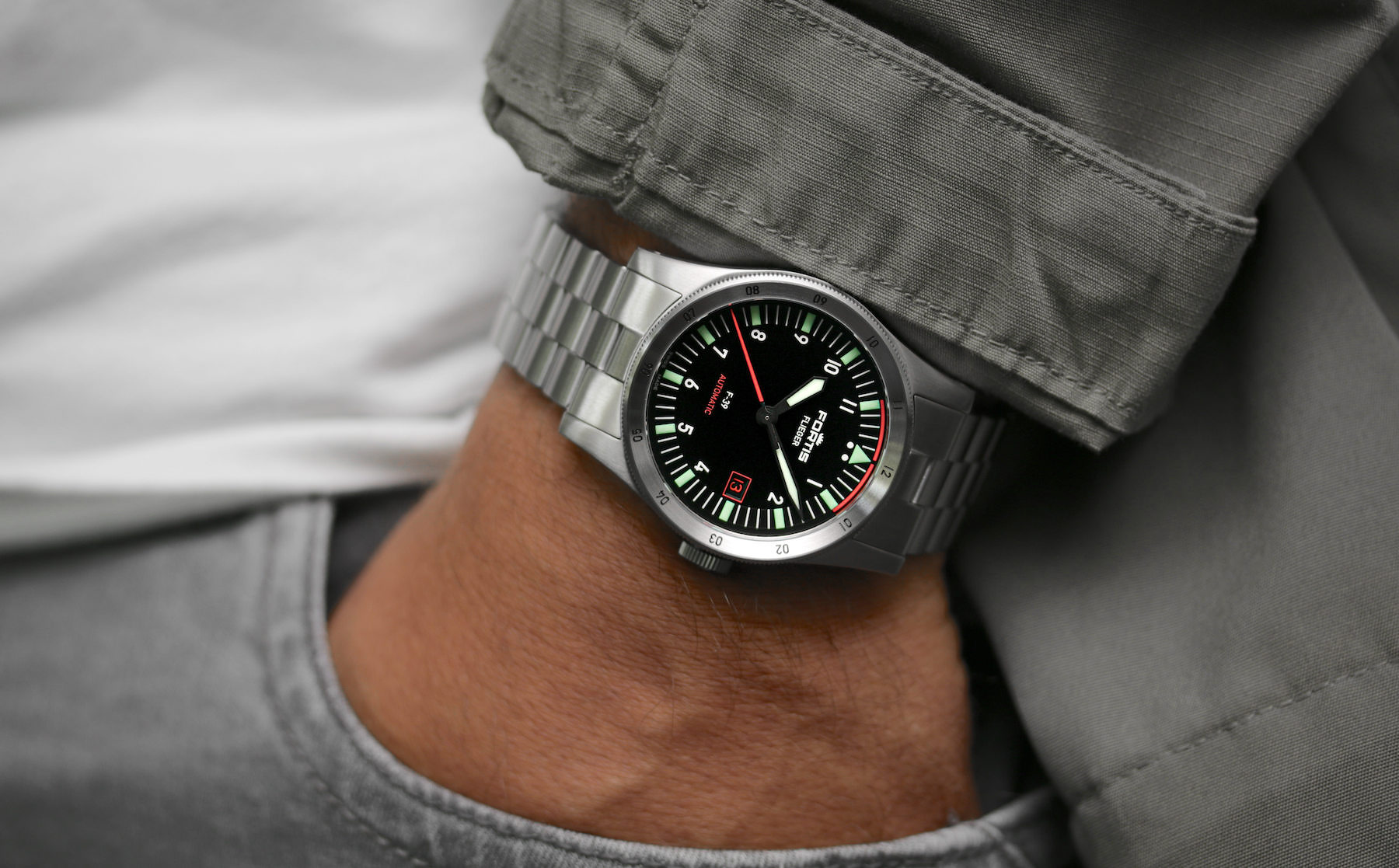 And yet it so easily could. We know this because we’ve seen it time and time again. Designers — even the very best — are prone to repeating the same things over and over again, without seeming to realize it is still possible to do things differently. Take the bezel of this Flieger collection, for example. Conventional wisdom suggests a bezel profile should be convex. Occasionally we see flat bezels (which are often employed for their visual distinctiveness and potentially cost-effective machining). Rarely, however, do we see concave bezels. 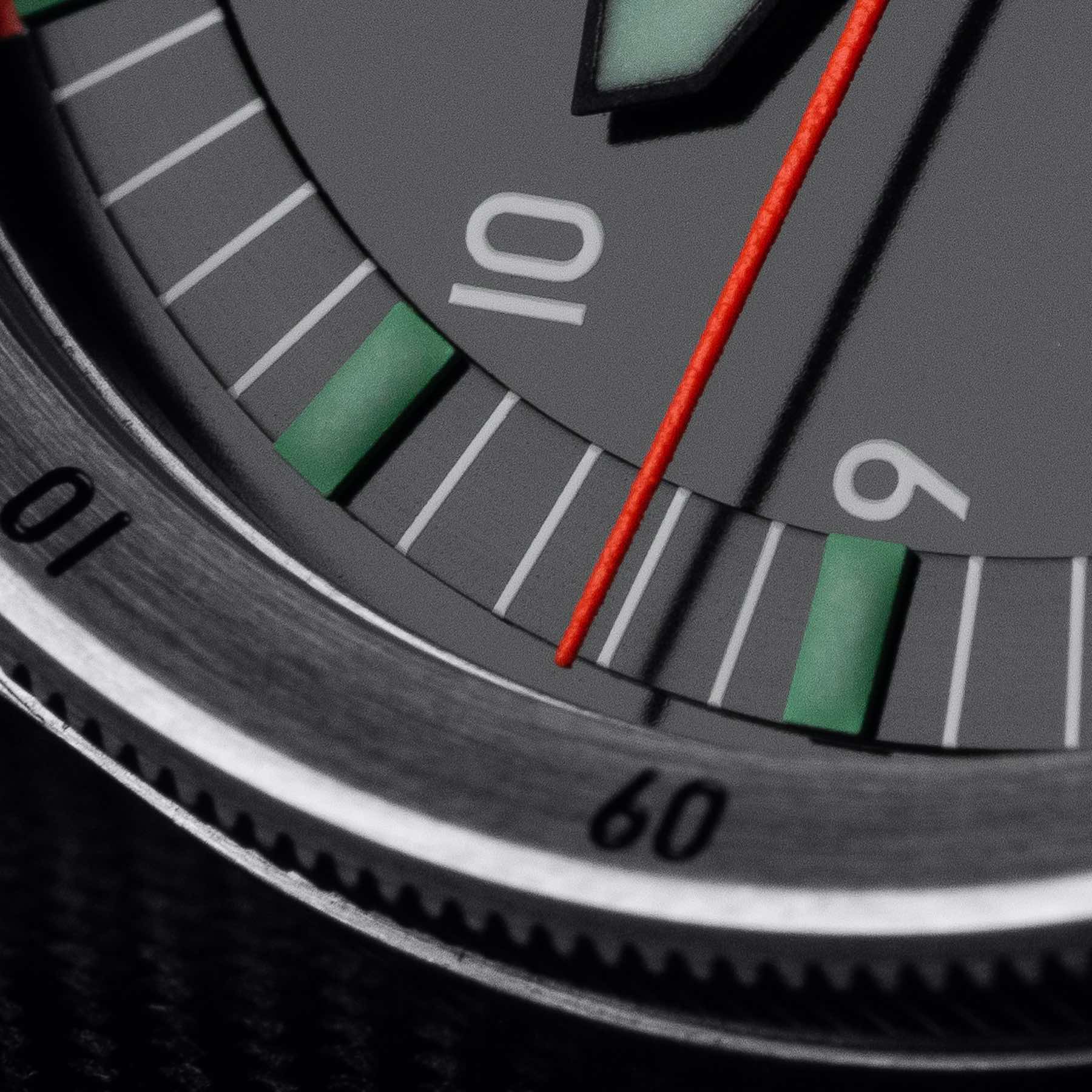 This isn’t exclusive to Fortis. It’s been done before and it will be done again. But it won’t ever be done regularly. It will never be mainstream. Fortis knows that, and has taken pains to build this feature into the DNA of the Flieger range congruously, so that it doesn’t stick out like a sore thumb, or appear too patently conscious. The fact it has 24-click GMT functionality is an added bonus. 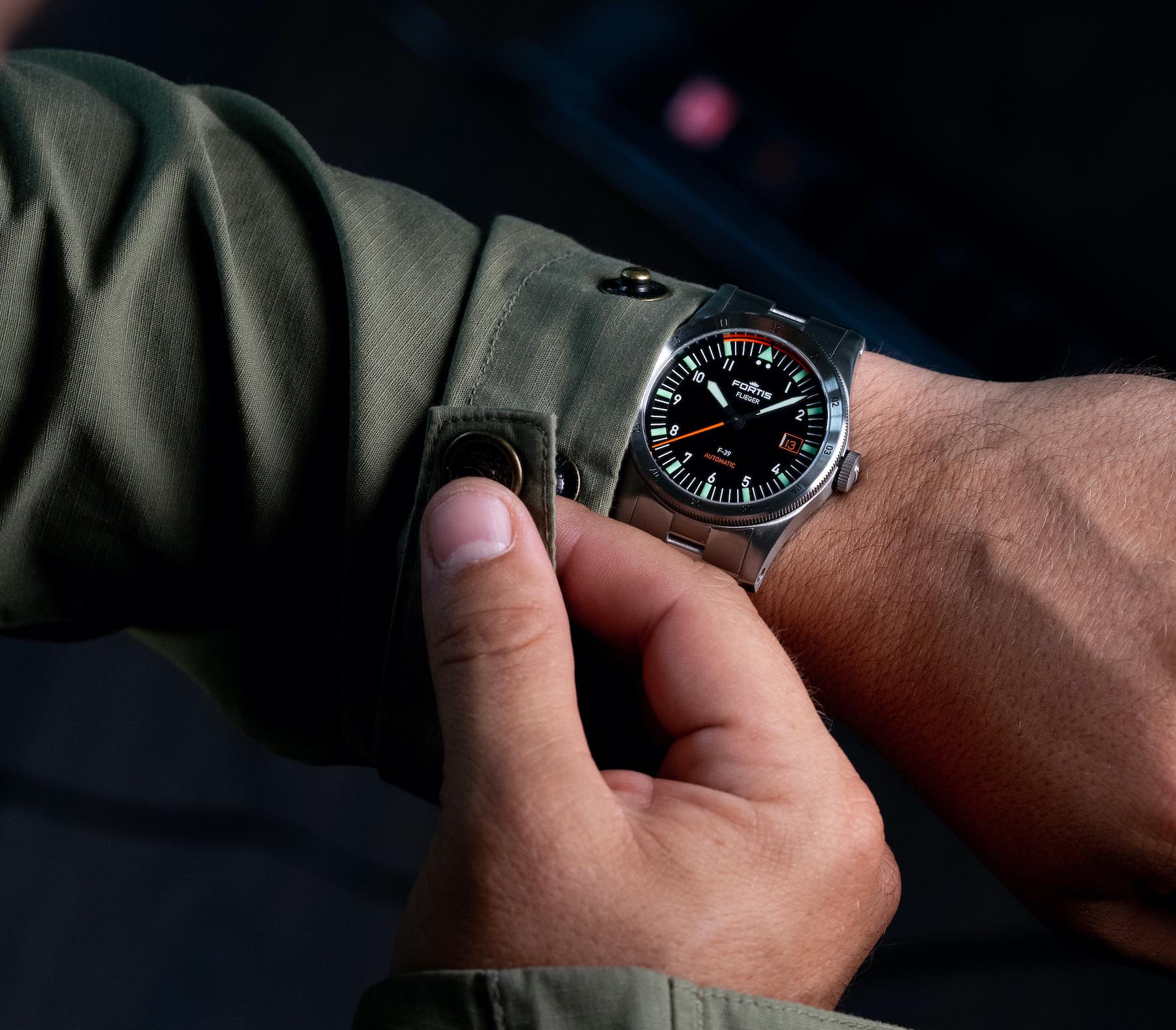 Pairing this unusual bezel with what is an undeniably vivid color scheme (and I am referring here to the employment of the blazingly bright Berlac Fluor Orange paint and minty freshness of the lumed Brixtrack on the dial) draws attention away from it expertly. And yet it’s presence simultaneously mutes the “blow-your-socks-off-at-all-costs” color scheme. It is a masterful balance. Hands treated with Super-LumiNova X1 pair with the F-## text on the dial along with the minute track to cool things down a bit. 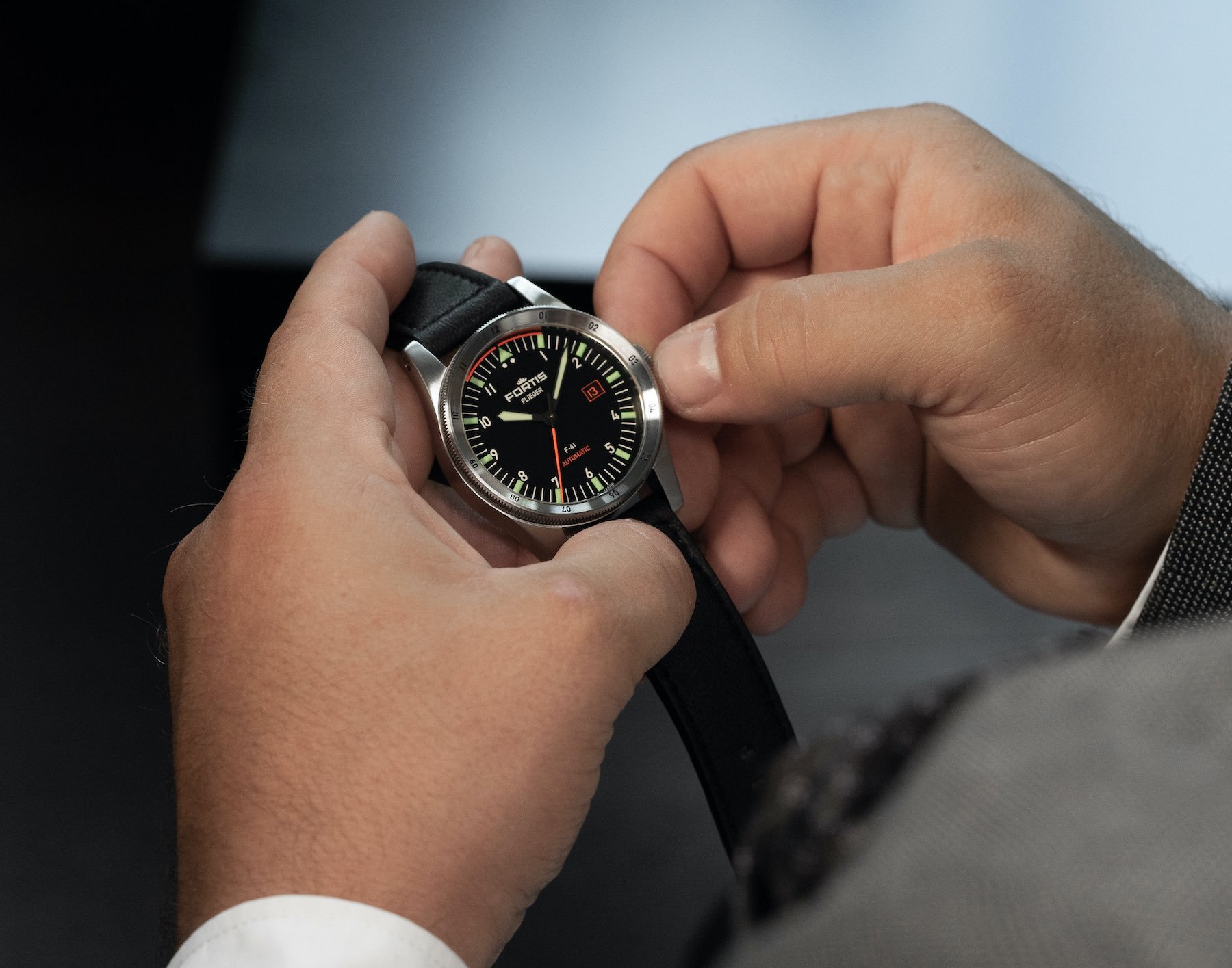 Will color ever fade?

No, not the paint itself. That will likely change over (a very long) time, but given the quality of modern paints (especially those produced by the Swiss Berlac) we won’t see the same kind of cracking or discoloration we take for granted with vintage pieces. I mean will the colors used on this dial age well in the eyes of fashionistas the world over? Will it still be cool in 10, 20 years? Is it even “cool” now? 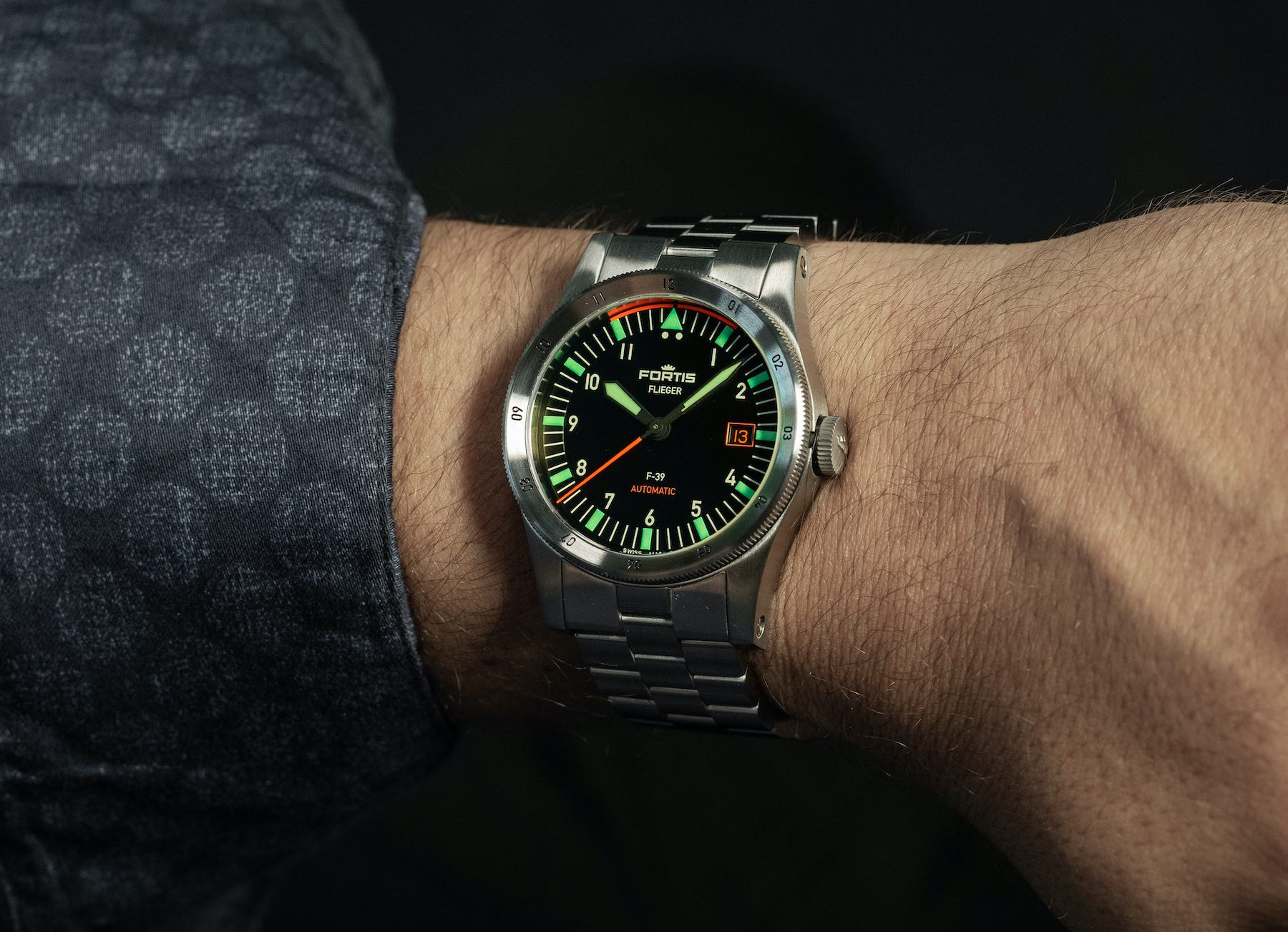 For me, this kind of colorful experimentation is always welcome. I love bright colors on wristwatches, especially when applied sparingly and with purpose. Here, it works — I love it. I enjoyed the aesthetic of the F-43 Bicompax release on the most recent “Fortis Day” (August 13th) but having tried that watch on my wrist a couple of times already I can say this: it is too big for my spindly arm junctions.

The 39mm time and date Fortis Flieger F-39 is, however, a thing of beauty. At this diameter, I actually interpret it more as a hyper-modern field watch (and it feels to me as a worthy successor to models like the Dirty Dozen), but its aviation heritage is clear. First and foremost, legibility is obviously regarded as imperative. Dial printing has been kept to a minimum and the text that does exist on the dial adds a little balance to the watch’s visage, which, to my eye, orientates one’s gaze quickly toward the essential information. 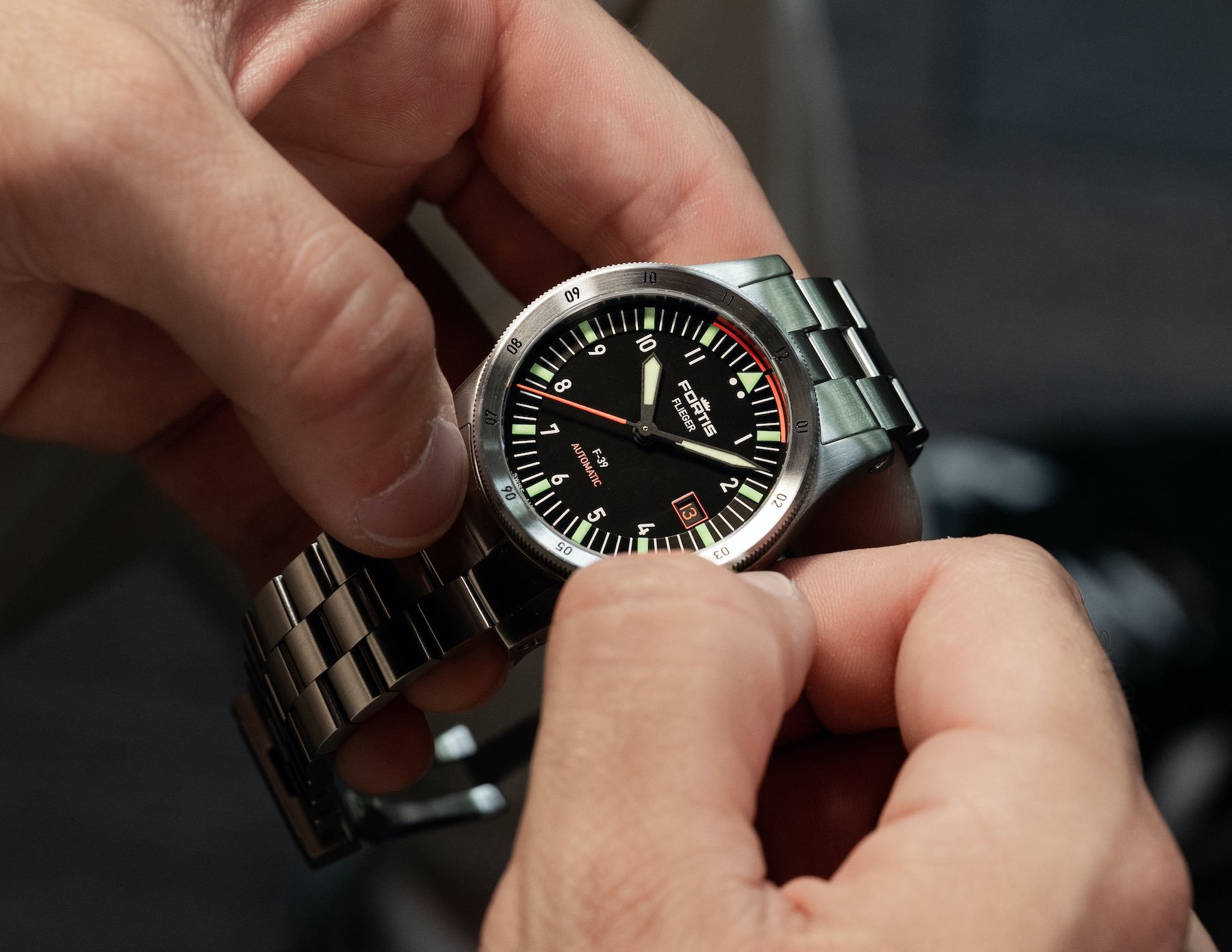 A date to remember

I know I gushed over the orange numerals and date window surround when it made its first appearance on the F-43, but bear with me here. This element is so achingly cool I can’t leave it alone. It makes such a difference. Date windows are often sources of frustration or crushingly boring. This one is neither. Its position — in place of the 3 o’clock Arabic numeral — doesn’t even cut into the Brixtrack lume at all. It is a vibrant pop of this delicious color that I’m really struggling to get tired of. 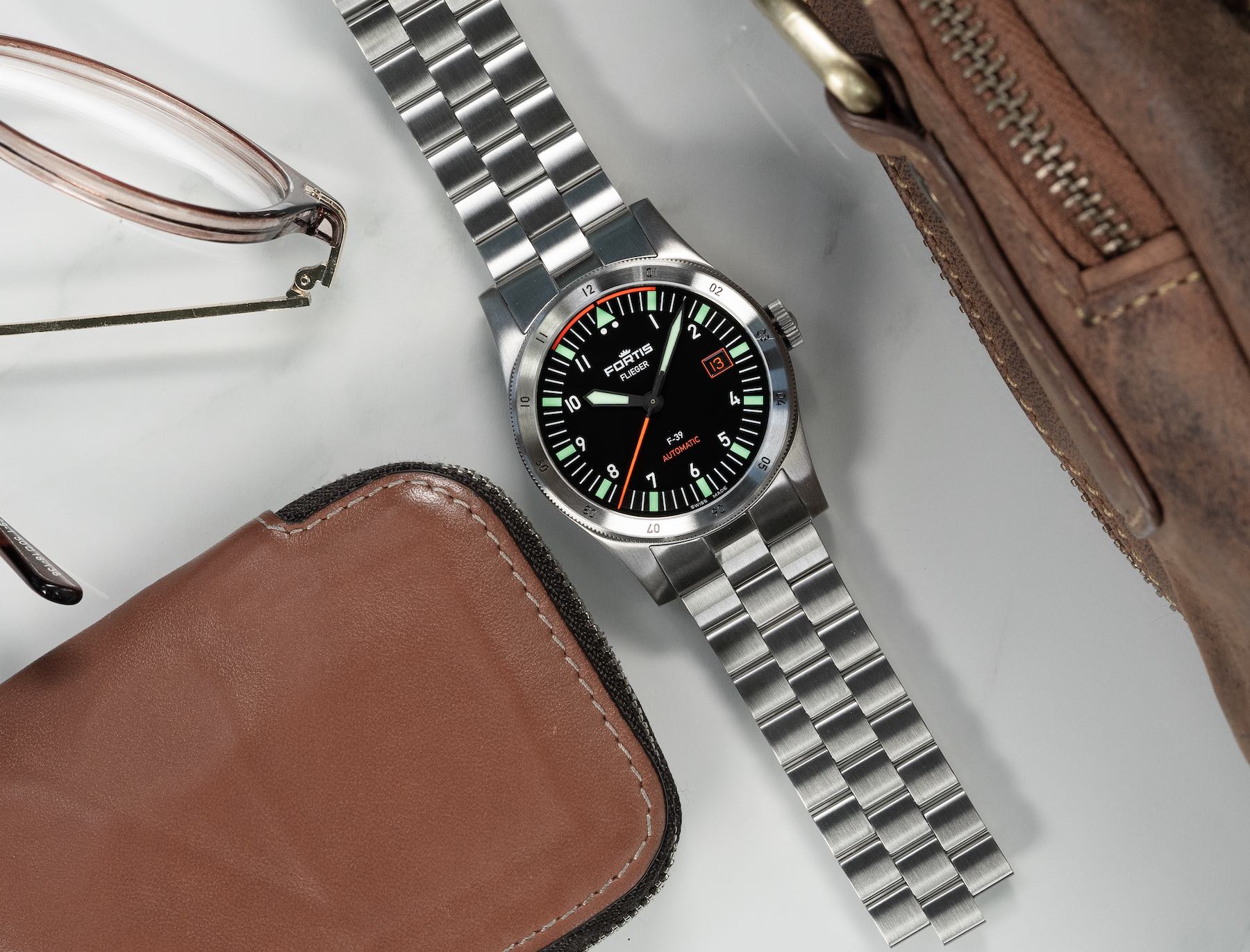 Behind the arresting dial and within the unusual case (which is water-resistant to 200 meters), the FORTIS UW-30 self-winding caliber beats away. The specs? 26 jewels, a quick-set date function, and a 38-hour power reserve. Simple and reliable are the words for this movement. Like the watch itself, it’s more than capable of accompanying you on your daily adventures.

Both the Fortis Flieger F-41 and F-39 models are available on either a steel bracelet with a quick-set Slide-Clasp, or a black grained vegetable tanned natural leather with pin buckle. On a bracelet, both models retail for €2,400 while the strapped versions have an asking price of €1,950. 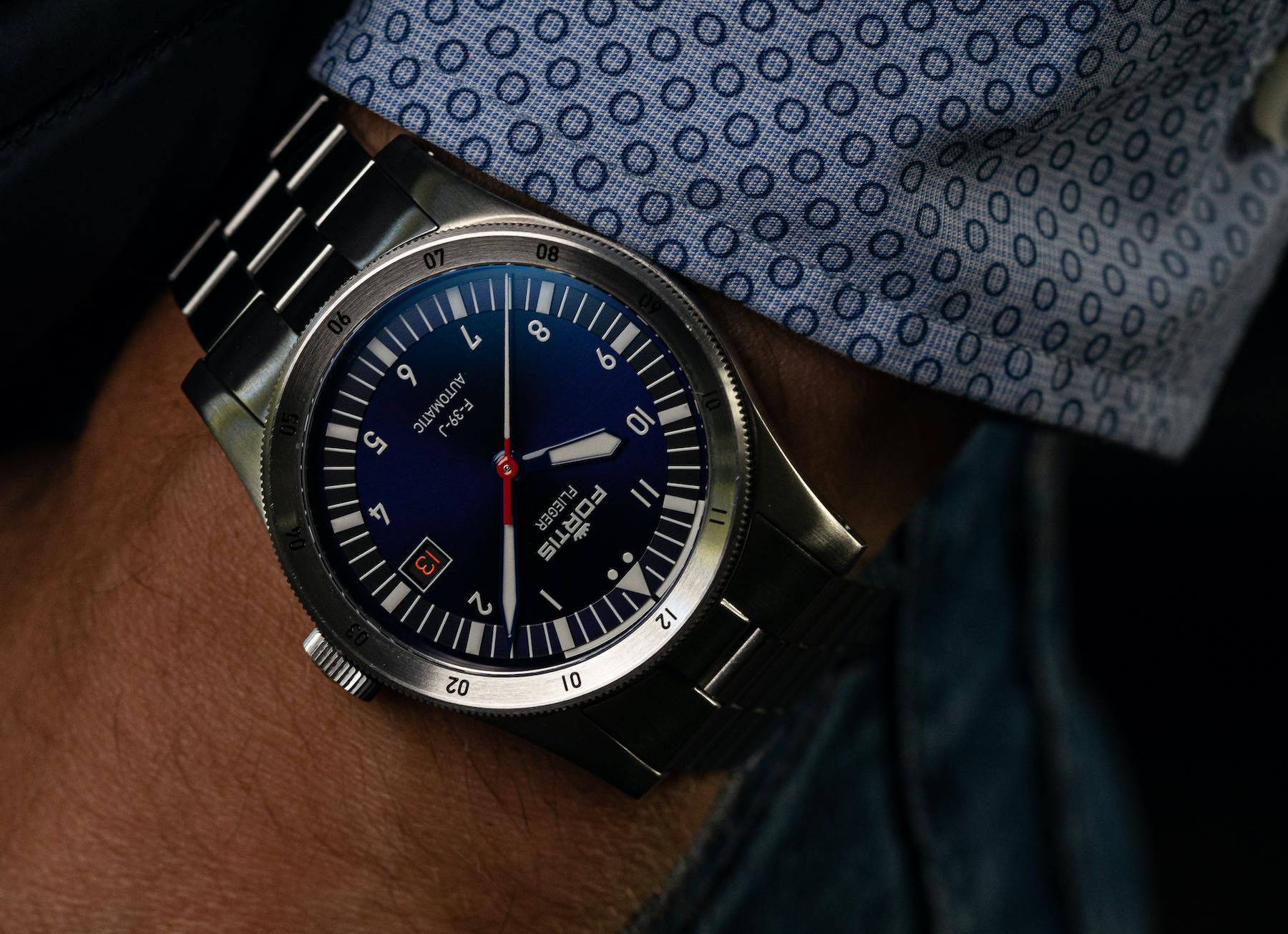 For Japan, Fortis has created another special edition F-39 with a blue sun-ray dial. This version will be limited to just 50 pieces and restricted to sale in Japan. Learn more about the Fortis Flieger range here.

Hot Topics
RJ’s Top Five Alternatives To The Omega Speedmaster Professional
94 comments
The Top Five Alternatives To The Rolex Datejust
91 comments
We Need Luxury Solar-Powered Quartz Watches From Rolex, Omega, Breitling, And Grand Seiko
69 comments
Above And Beyond: When And Why Paying Over Retail For A Watch Makes Sense
48 comments
My Guilty Pleasure Watch: The Chanel J12 Marine
48 comments
Popular
Oris Classic Date Or Save Up For an Omega De Ville Prestige?
Robert-Jan Broer
11
Hands-on: Tudor Black Bay 36 – Like a Comfy Pair of Jeans
Michael Stockton
11
Hands-On: Breitling Navitimer 1 B01 Chronograph In 43mm
Robert-Jan Broer
0