When almost every other brand offers a sports watch on a steel bracelet, how could Greubel Forsey not do so? Of course, to be a true Greubel Forsey, such a watch must be outstanding in every way. The new GMT Sport lives up to this claim.

To understand the brand Greubel Forsey and its watches, you actually must be holding one of their creations in your own hand and experience it in person. This may seem hardly possible to you, but it isn’t. I had the chance to do that for the first time when this brand presented itself on the 2017 edition of the Munichtime, a small fair in that German city, open to everybody. That was before I became a Fratello editor. Being a passionate watch enthusiast was all that was required.

Greubel Forsey’s timepieces always look different from the average concept of a typical watch. Many of the brand’s creations expose a remarkable depth and three-dimensionality to show parts of the watch’s movements. All watches feature an outstanding level of hand finishing. At the very first glimpse, the finishing of the visible surfaces of movement parts appears plain, almost simple, because Greubel Forsey doesn’t apply traditional decorations like, for example, Geneva stripes. At second glance, though, you will discover mirror polished or frosted surfaces in all possible shapes often provided with perfectly applied sharp angles.

Many of Greubel Forsey’s watches include special forms of Tourbillons for which the brand invented new types and designs. But there are also classical complications, albeit in a contemporary execution. Let’s take a look at how Greubel Forsey interprets a GMT function. 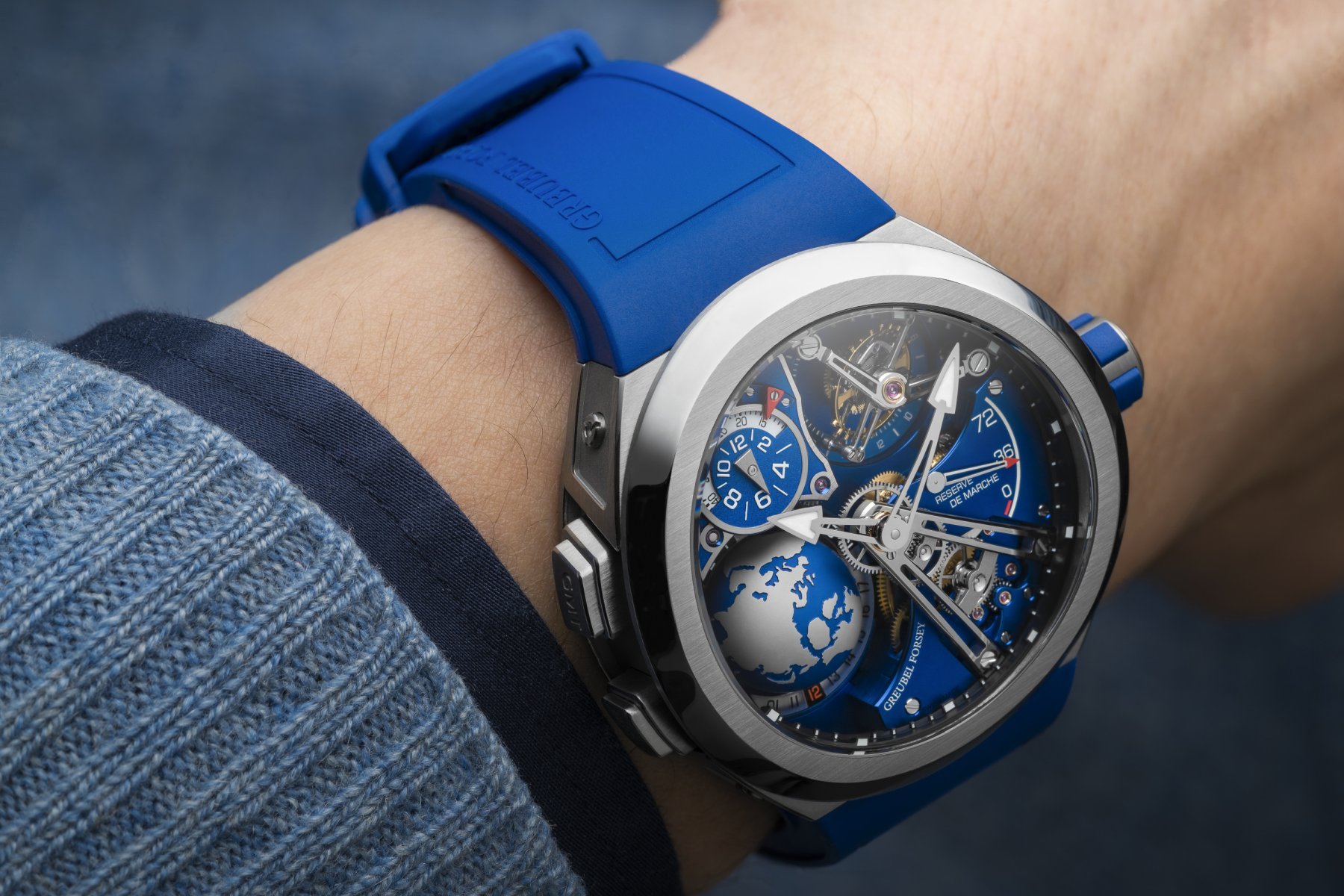 Greubel Forsey has been offering its GMT movement before, and there even has been a GMT Sport watch. So this is not the novel aspect of the new watch. But for the sake of completeness, let me introduce the fundamental functions and indications of the GMT Sport.

At the one o’clock position Greubel Forsey’s Tourbillon 24 Secondes regulates the movement. Its cage is inclined at a 25° angle, and it completes a full rotation every 24 seconds. At three o’clock, a power reserve indicator shows the remaining part of this watch’s 72 hours power reserve. At four and five o’clock, the two struts of the arched and skeletonized bridge are mounted, which carries the central hour and minute hands that indicate time on a reduced scale along the bezel’s inner side. Between seven o’clock and nine o’clock, a globe depicting the earth as seen from above the north pole rotates once in 24 hours to show the current time for all longitudes, including a day/night indication. At ten o’clock, a triangular hand shows the second time zone, and a rotating disc displays running seconds. 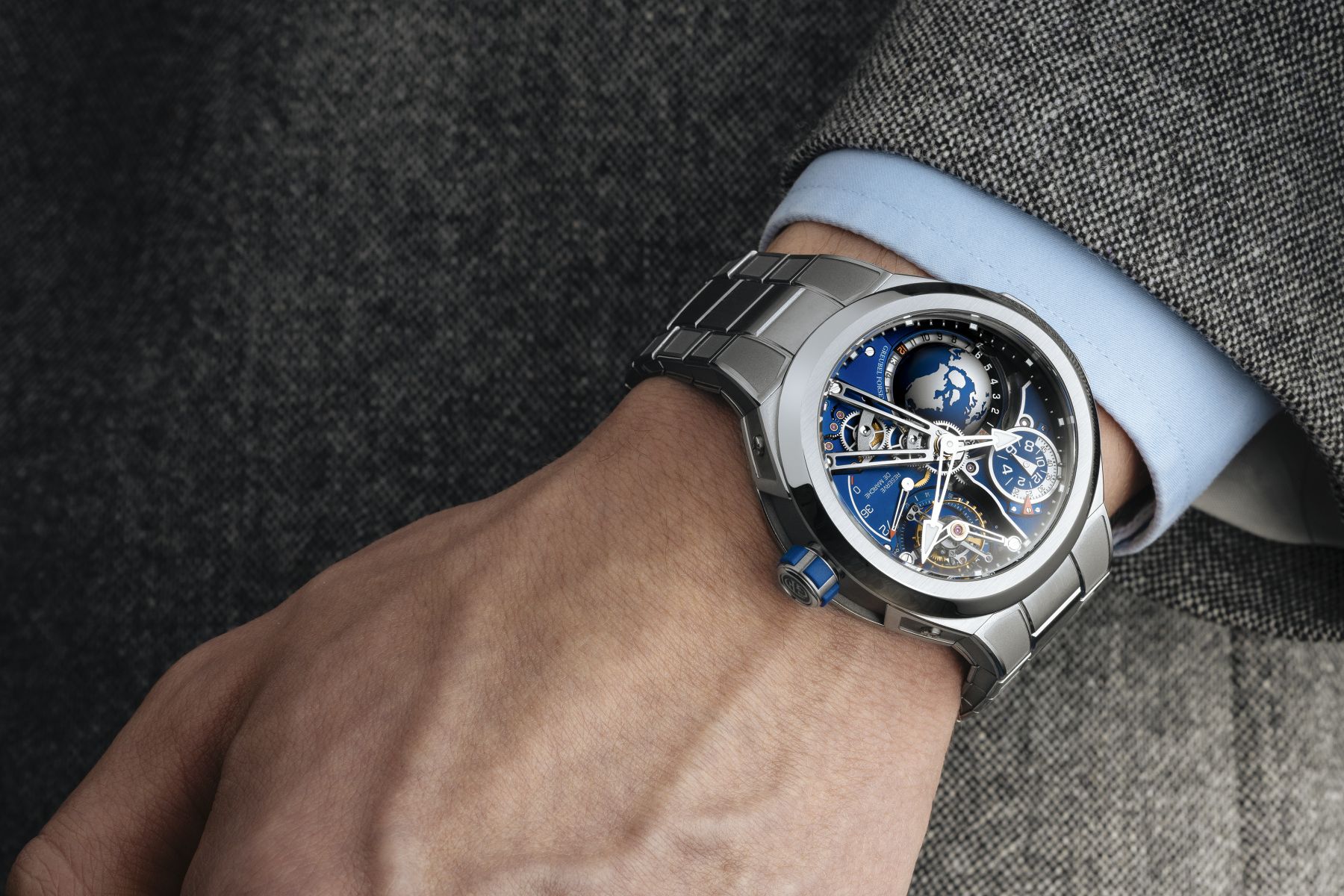 The bridges, the background of the sub-dials, the globe, and the scale around the Tourbillon have a matte blue finish that contrasts well with the polished details.

On the back of the watch, a rotating disc carrying the names of 24 cities displays the time in the respective time zones. This display also indicates daylight saving time and the time zones applying it.

This watch’s bezel is extraordinary as it is not a flat ring but an ellipsis that bends downward at twelve and six o’clock for improved ergonomics. At the left side of the 42mm case (17.80m high), two pushers adjust the second time zone and the globe. 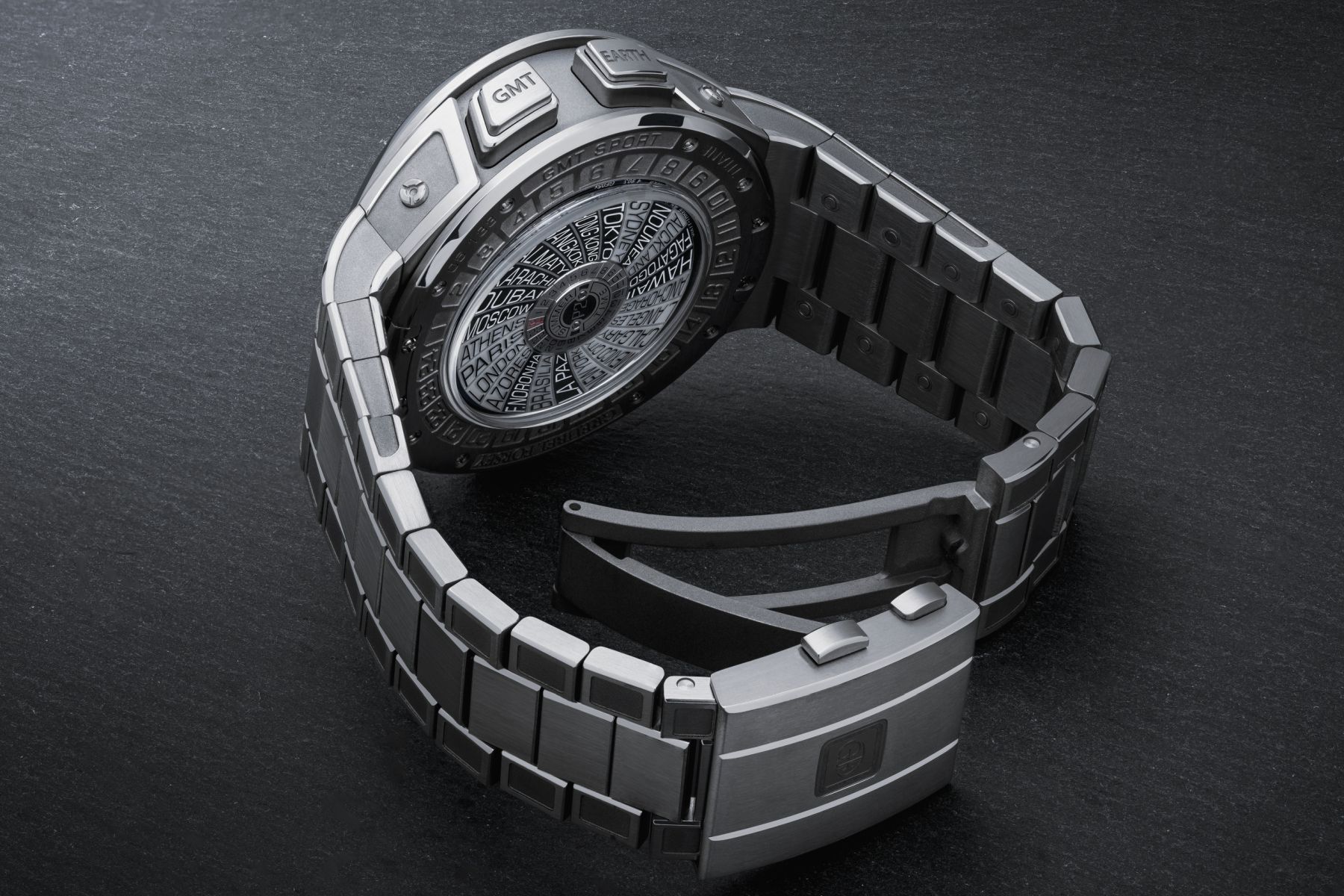 This is the first time that Greubel Forsey presents a metal bracelet for one of its watches. But this bracelet doesn’t look like a debut at all. What impresses at first sight is the bracelet’s thickness, which offers the possibility to continue the case’s structure not only on the outer side of the bracelet but also on the bracelet’s lateral side. The central links are vertically brushed. The outer links showcase a frosted surface that is enclosed by a brushed margin. This pattern is present on the outside and in part also on the lateral side of the bracelet. All edges are beveled and polished by hand. Visually the bracelet perfectly integrates into the case.

The bracelet appears massive. But, like the case, the bracelet is made of grade five titanium, which should make it feel comfortable. It is closed by a folding clasp that appears comparatively simple with a brushed surface and beveled and polished edges. The clasp features a fine adjustment that the wearer can operate via two pushers at the clasp’s side without the need to take the watch off the wrist.

While wearing the watch on the wrist, no pins or screws are visible that would allow changing the bracelet’s length. Instead, there are small spring-mounted push buttons on the inside of each outer link that remind me of a similar construction once developed by Cartier.

The bracelet is attached to the case with tri-wing screws. A blue rubber strap is delivered with the watch, but in my opinion, it would be a shame not to wear the Greubel Forsey GMT Sport on that unique bracelet 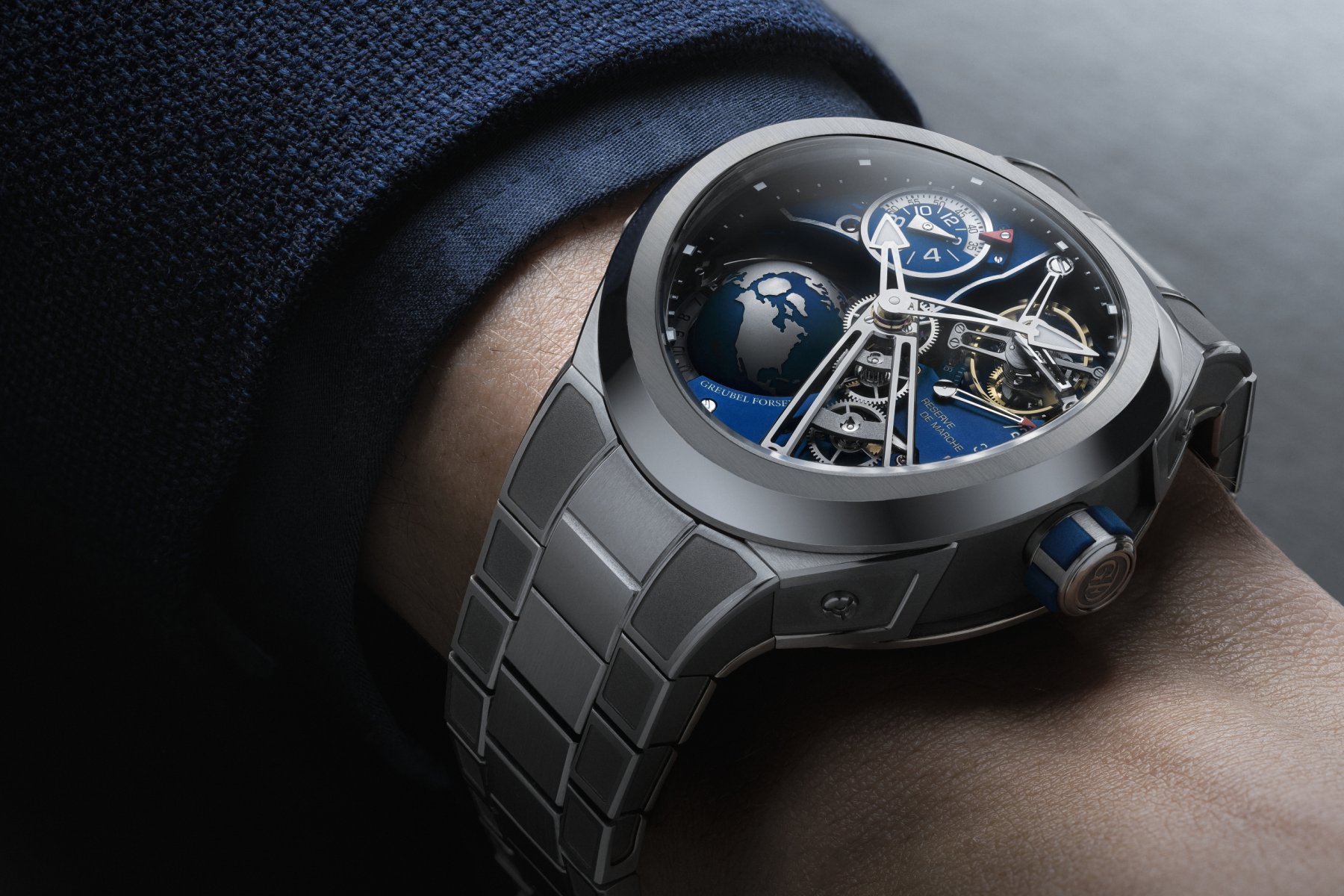 Even on a bracelet, the GMT Sport unmistakably is a Greubel Forsey. The bracelet that the brand conceived for this watch lives up to the outstanding quality and design of this timepiece. Watch head and bracelet form a unity and a very attractive, cool, and exceptional package. The only thing I would change are the blue (rubber?) segments on the crown.

Greubel Forsey will produce only 33 pieces of this model. If you can afford it, you should act quickly.

Visit Greubel Forsey’s website to learn more about the brand.