The golden era of watches was either the 1950s or the 1960s. I’d say it’s open for debate. But claiming the 1980s or 1990s was the golden age of watches is just dead wrong. Still, some watch designs from the later eras mentioned have proven strong enough to keep evolving without losing their origins. The first Rolex Yacht-Master from 1992, for example, is a watch that is still clearly visible in its current iterations. And apart from the Rolex Yacht-Master 16622, this morning, you will also read about the Corum Bubble, which debuted in 2000 but was designed in the 1990s. There’s also a Panthère de Cartier bag, which is linked to a watch that debuted in the 1980s but was also very popular in the decade that followed. You be the judge if the stuff presented in this modern-retro write-and-read-up matches your contemporary taste.

The most striking detail of the Rolex Yacht-Master is, arguably, its bezel. It’s also a love/hate feature. I was never a big fan of it. What is interesting, though, is that the polarizing, three-dimensional bezel is basically a luxurious version of a Submariner bezel. It was in the 1980s that Rolex wanted to update and modernize its Submariner tool watch. Most likely, the design and prototypes of the watch were too radically different for the conservative minds at Rolex. As a result, the Submariner remained the trusted dive watch, and a new watch was introduced. The 1992 original Yacht-Master that came out in yellow gold was that watch. 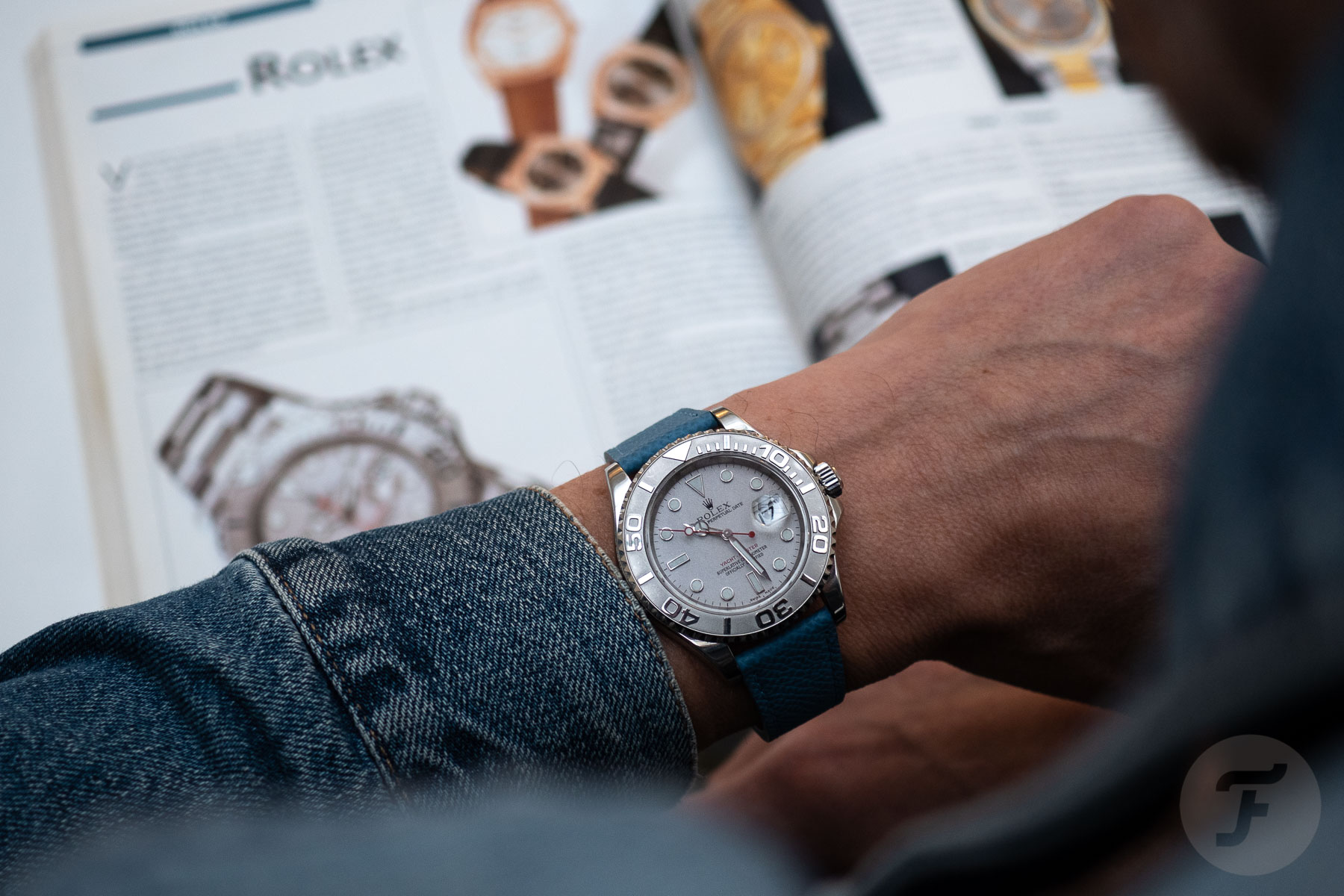 Origins of the Rolex Yacht-Master 16622

The first Yacht-Master looks like the epitome of 1990s style. The 40mm yellow gold watch (reference 16628) was just as brash, bold, and flashy as the printed silk Versace shirts of the era. With its white dial and Daytona-like case, the Yacht-Master was also way more svelte and smooth than the more straightforward “Sub” it was supposed to replace. It now seems weird that the glamorous Yacht-Master was originally intended as a tool watch. That’s because it debuted in full yellow gold. But it did use the same 3135 movement as the Submariner, and because of the Triplock crown, it was water-resistant to 100 meters. 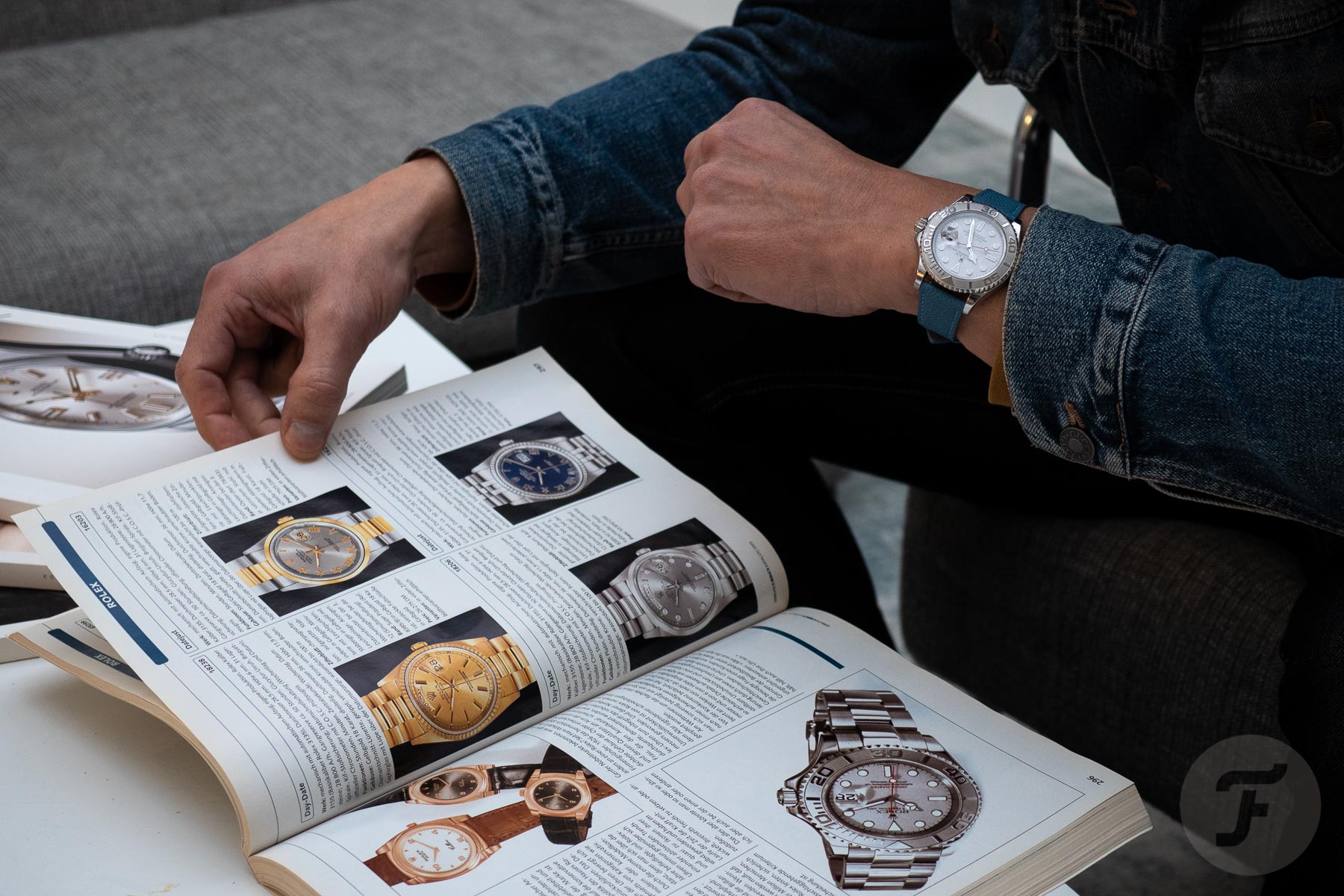 The 1999 Rolex Yacht-Master 16622, which came in a steel case and on a steel Oyster bracelet, features a platinum dial and bezel to ensure that it isn’t mistaken for a tool watch. And to make doubly sure of that, Rolex refers to the combination of steel and platinum as Rolesium. 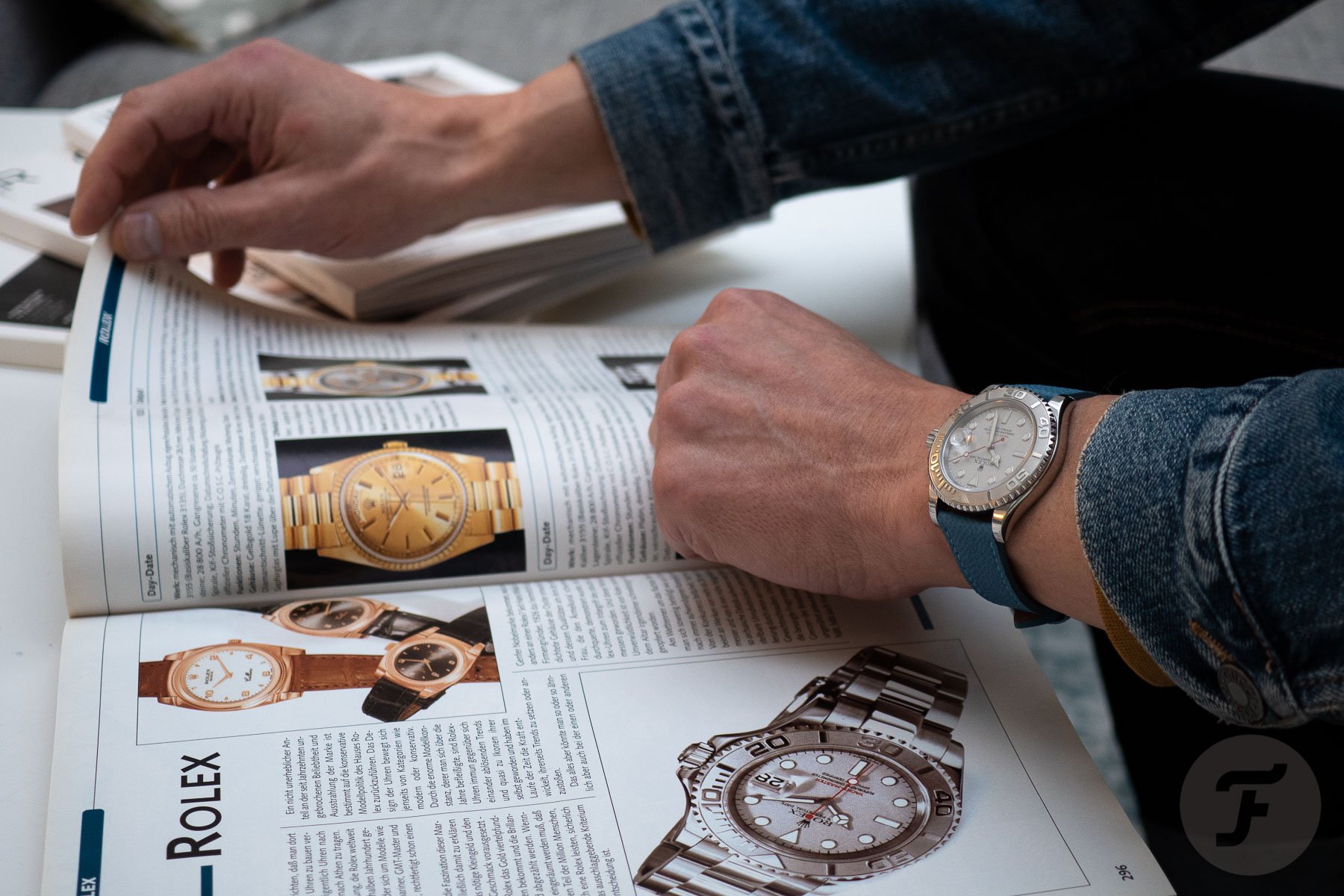 It’s the Yacht-Master’s three-dimensional, very tactile bezel that has always bothered me. There’s nothing wrong with its fat hands and maxi markers, but the decorative bezel and I never quite “clicked.” In the yellow gold debut version, the bezel insert was permanently soldered to the bezel. The platinum bezel of the 2004 Yacht-Master 16622 that I have on my wrist in the pictures is machined and shows crisp raised markers. The monocolored, bidirectional timing bezel lacks the instant readability of the Sub’s bezel, but since the watch is intended for above-water use, the bezel’s functionality is secondary. The platinum bezel does match the platinum dial very well — monochromatic was all the rage in the 1990s. But the gray appearance also lacks contrast. And the steel Oyster bracelet also didn’t do much to help in that regard. A strap change, however, can do miracles. 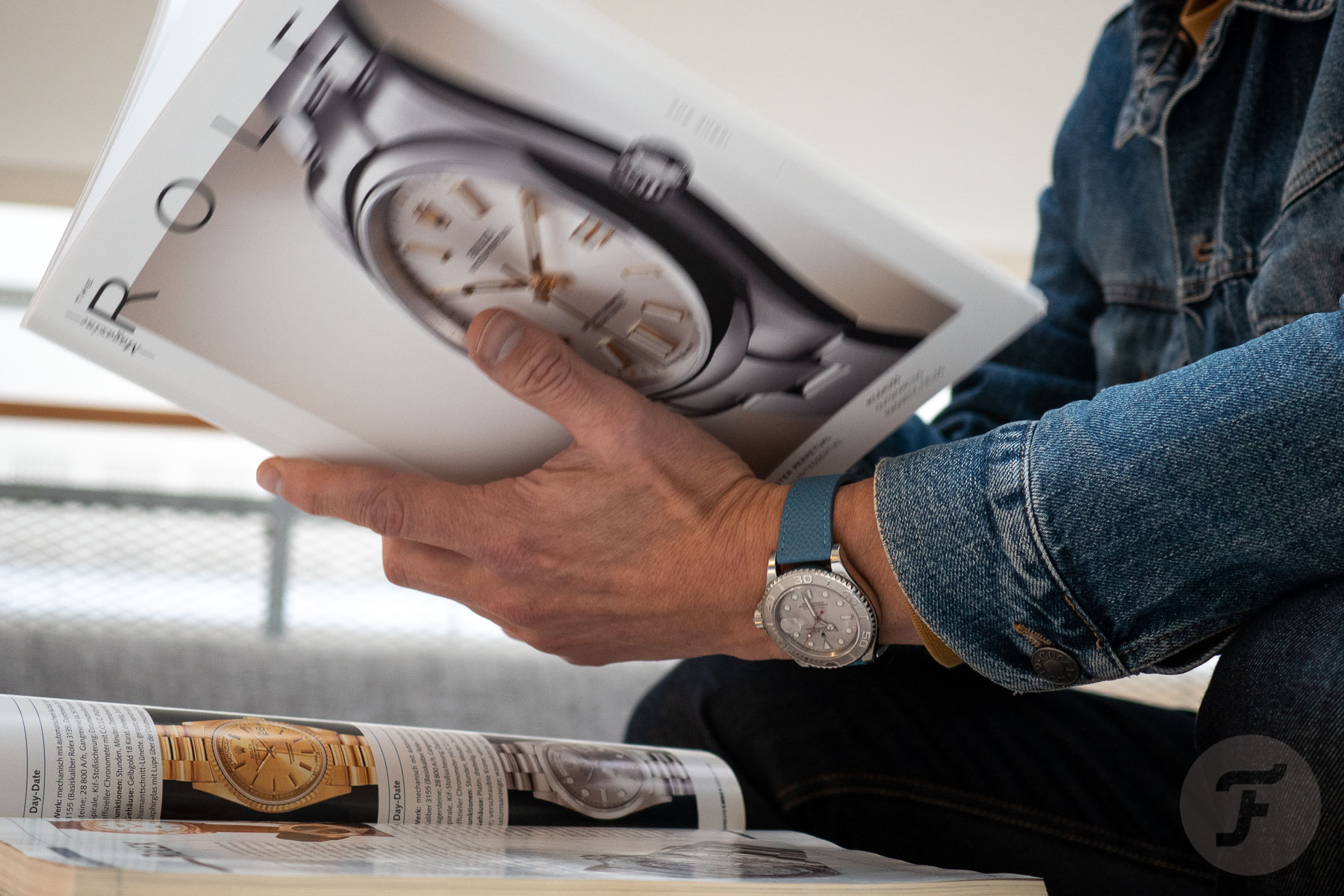 RJ was kind enough to put an Atelier Honoré Miami Blue Grain strap with pink lining on his Yacht-Master and lend it to me. It was like looking at a new watch, but it also gave me some serious 1990s vibes —Miami Vice vibes, to be more specific. That’s not entirely chronologically correct because the final episode of the eponymous police-action series aired on January 25, 1990. Still, Sonny Crockett, played by Don Johnson, had a style that perfectly matched the Yacht-Master on a light blue strap. I’m talking oversized blazers over pastel-colored T-shirts in the Miami Art Deco setting with synthesizer tunes for a soundtrack. Crockett didn’t wear a Yacht-Master because it didn’t exist at the time, but he did wear an Ebel chronograph with a Zenith El Primero movement. 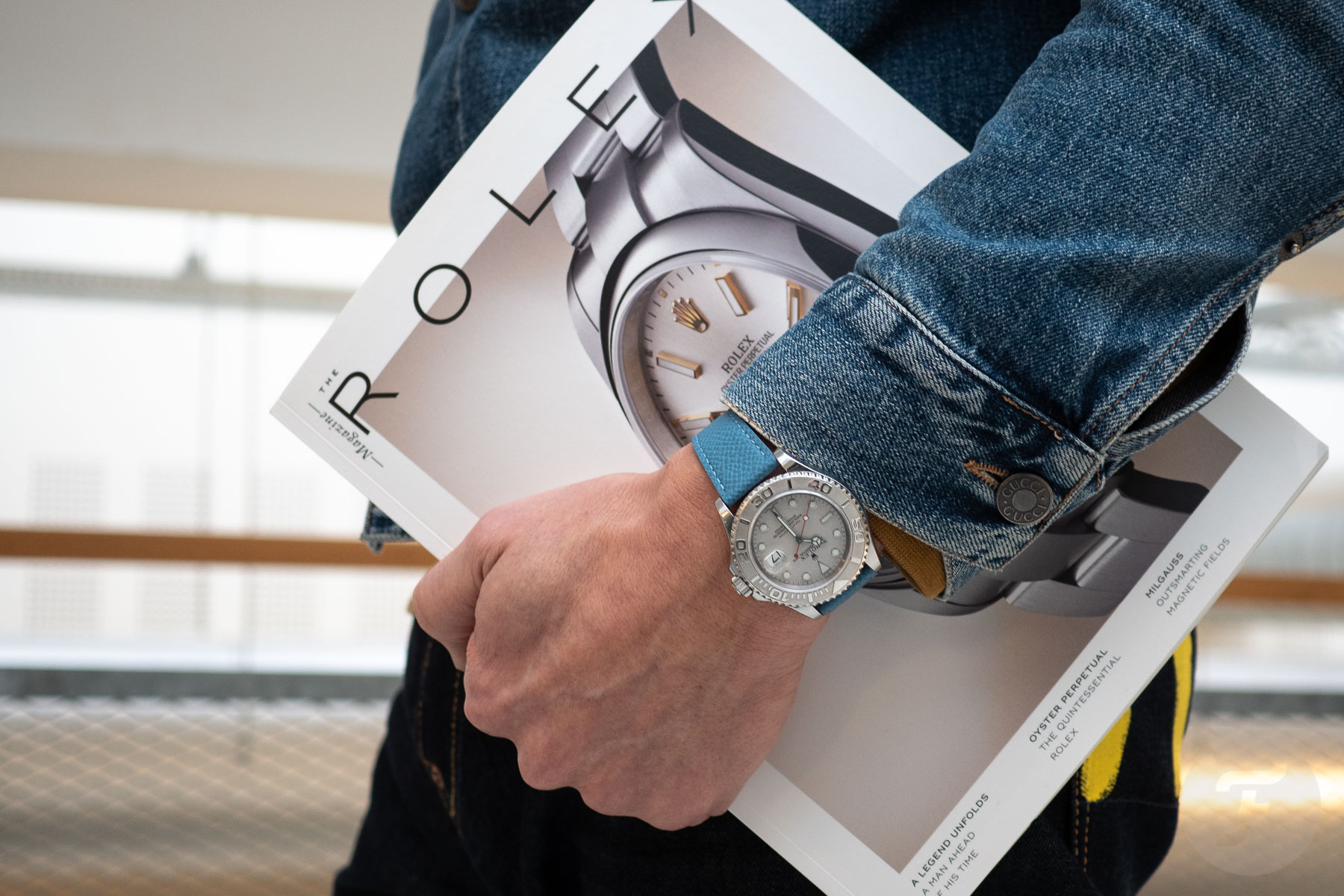 In any case, what the 1990s Rolex Yacht-Master with a light blue strap does is pop. Indeed, it pops more than it ever did before. The gray shine of platinum and steel has always dominated the look. The light blue strap, however, uplifts the dial, and it also seems to give more contrast to the bezel. The final bonus is that the blue enables the red text and seconds hand to not feel so alone color-wise. I never expected to write this, but in Miami Vice configuration, the Rolex Yacht-Master is a very desirable neo-vintage classic. A search on Chrono24 tells us that you need at least €7,500 (preferably, a bit more) to buy a reference 16622 Yacht-Master. What do you think? Does that seem reasonable to you? 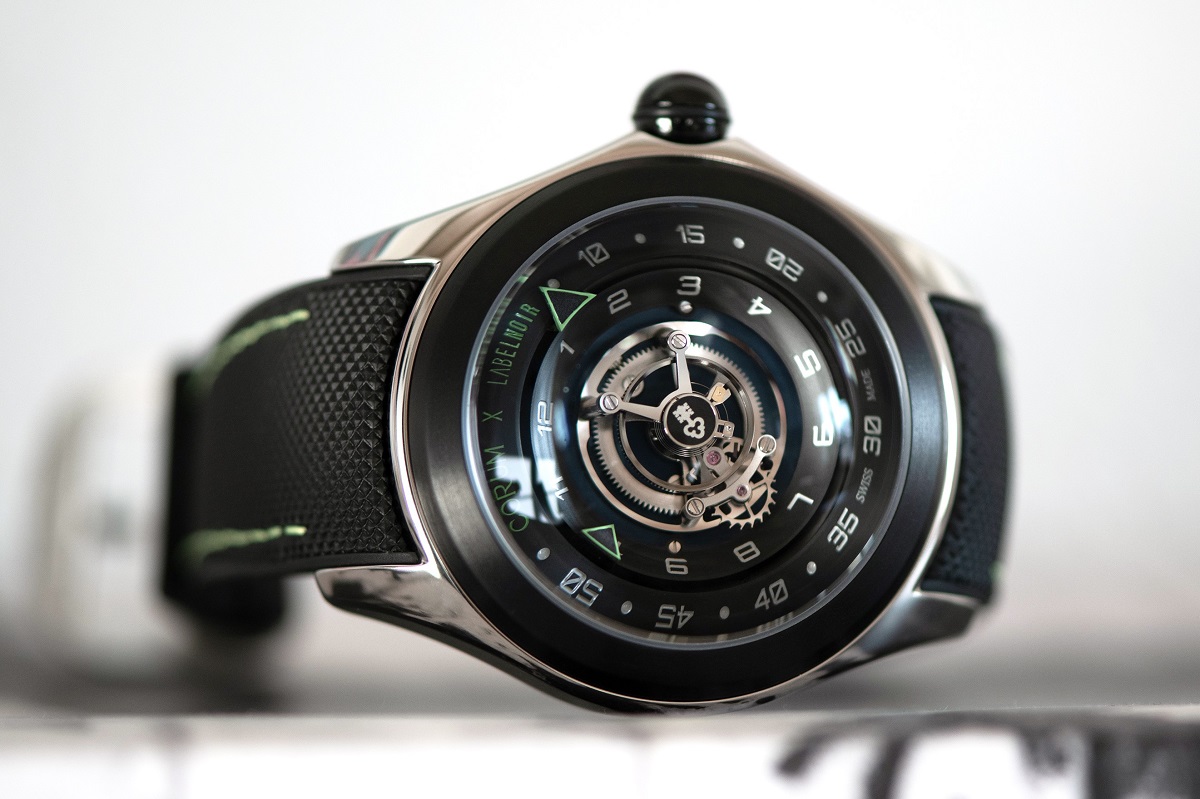 The first Corum Bubble debuted during Baselworld 2000. That means it was designed during the 1990s, so I consider it a 1990s watch, like the Rolex Yacht-Master. The Bubble watch, with its oversized case and huge domed crystal, was the daring creation of Severin Wunderman, then-owner of Corum. In 2000, retro was non-existent, meaning the nonconformist watch that was inspired by experimental dive watches became something of a cult hit. I did like the Bubble Jolly Roger, and I also remember the devilish Bubble Lucifer.

Come 2023, and the Bubble now comes in a 47mm case with a central tourbillon under its XXL domed crystal. The central tourbillon is not unique — Bvlgari has one in its collection, and so does Omega — but it’s also not common. Furthermore, the Corum × Label Noir Bubble 47 Central Tourbillon is a unique piece in the truest sense. This collaboration between Corum and watch tuner Label Noir resulted in a remarkable timepiece dedicated to the Macau Master of Time event. This Haute Horlogerie Bubble carries a price of CHF 95,000. If you want to find out more or purchase it, you can do so on Label Noir’s website. But if you feel nostalgic and have a soft spot for the early Corum Bubble watches, there’s a pretty cool and fun Jolly Roger limited edition available on Chrono24 for just under €3K. 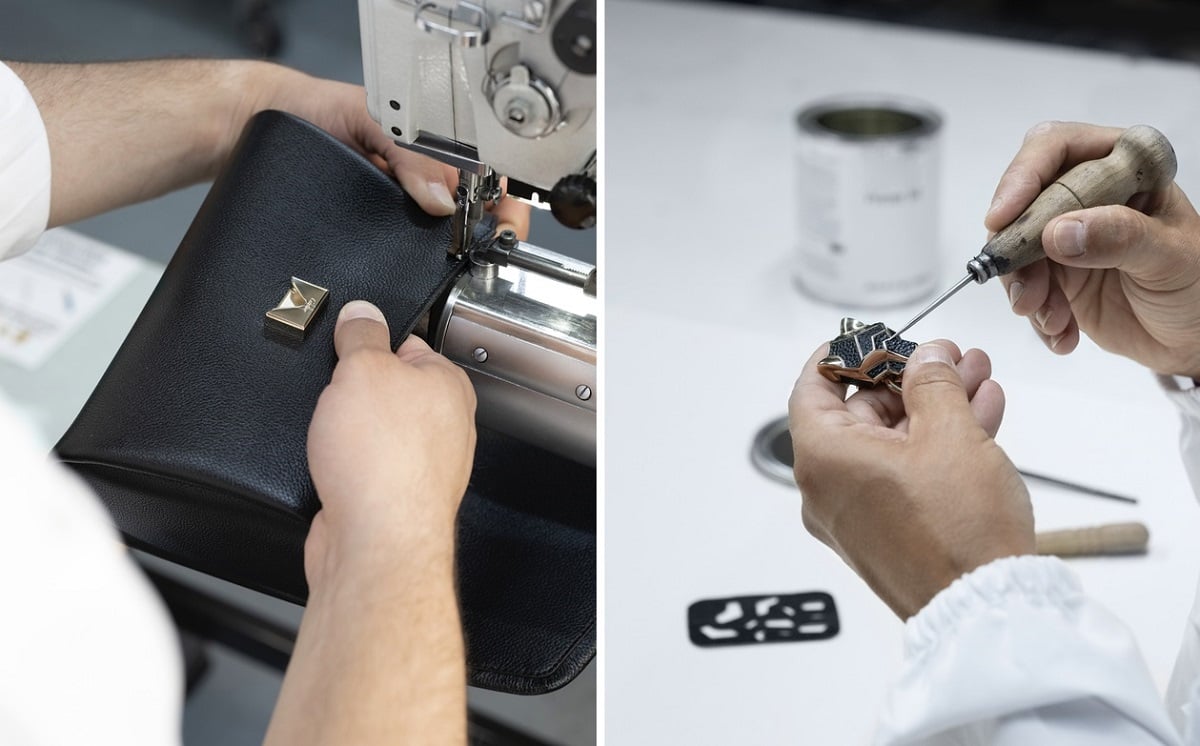 You want your jewelry to match your watch and the watch to match your bags. Cartier makes it possible. The new Panthère de Cartier bag has a radical design inspired by the jewelry from La Maison. Marlin Yuson, the Creative Director of Leather Goods, and her team are responsible for its design. The clasp and the precious chain of the Panthère de Cartier bag unite leather goods and the jewelry expertise of Cartier’s workshops. The clasp is a new interpretation of Cartier’s emblematic animal and shows faceted metal and golden or palladium finishes. The panther’s head is made of eleven flat surfaces and is adorned with leather inserts. 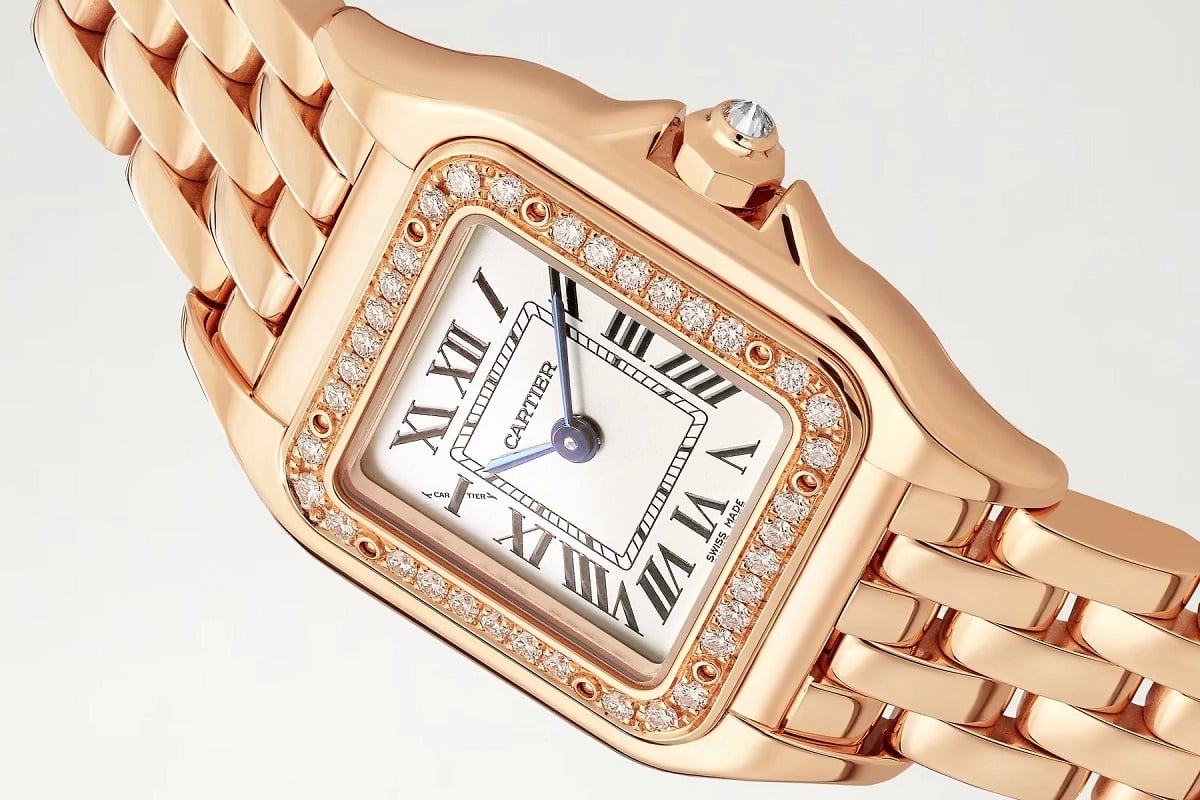 To complete the look, I suggest a 1980s Panthère that was also very popular in the 1990s. It was worn by many celebrities, such as Pierce Brosnan in his pre-Omega days. But the Cartier Panthère Small of today is also an excellent choice. The latter, if you must know, has been seen on the wrists of Dua Lipa and Rihanna. The €25,300 small 22mm × 30mm version in rose gold with diamonds not only matches the bag but almost everything else too. With its 6mm case thickness, the modern Panthère Small is both a piece of jewelry and a watch. 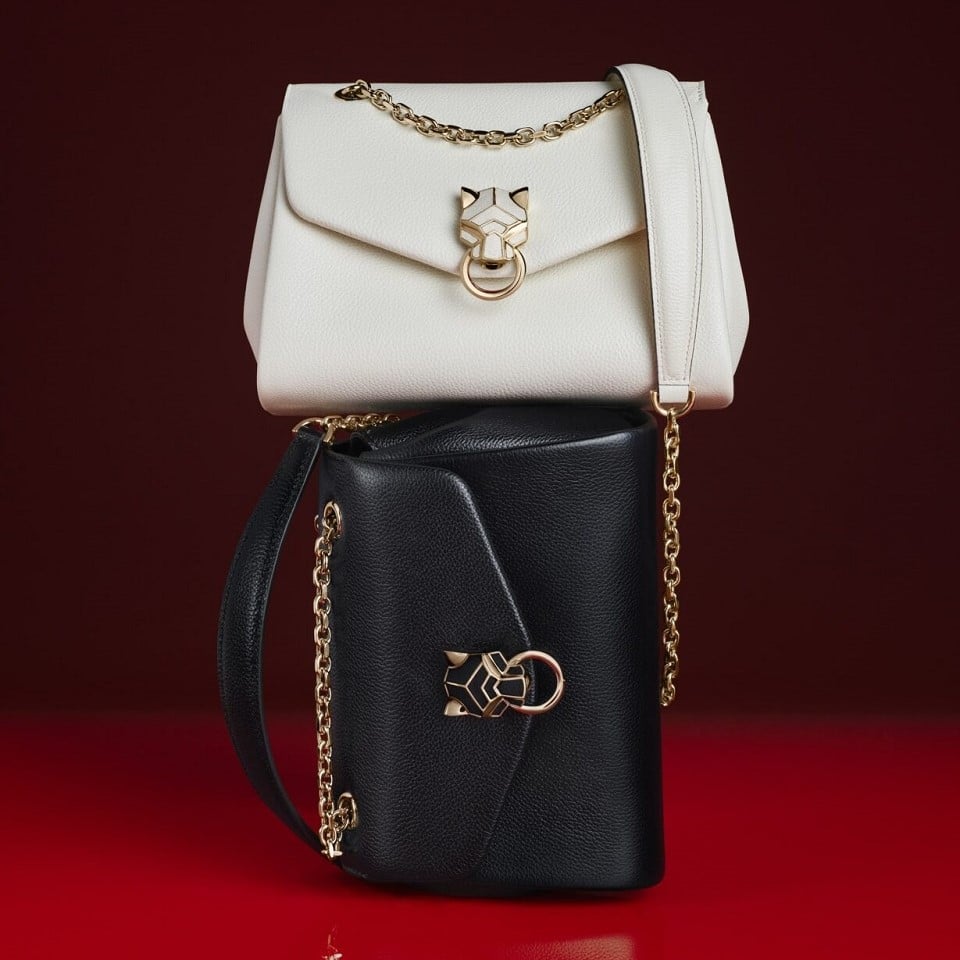 Both the watch and the new Panthère de Cartier chain bag — which comes in a plethora of colors, such as black, navy blue, red, creamy white, and petrol blue — are the perfect Valentine’s Day gift for the lucky ones fortunate enough to gift or receive them. Have a look at the official Cartier website for info and prices.