It’s 22 November 1963 and US President John F. Kennedy has just been assassinated by Lee Harvey Oswald during a motorcade in Dallas, Texas. Kennedy’s Vice-President, Lyndon B. Johnson (more colloquially known LBJ), assumes the top job and brings the solid yellow-gold Rolex Day-Date that often adorns his wrist to a worldwide audience. LBJ is the first US president to wear the Rolex Day-Date and in doing so, inadvertently launched one of Rolex’s most memorable brand associations. 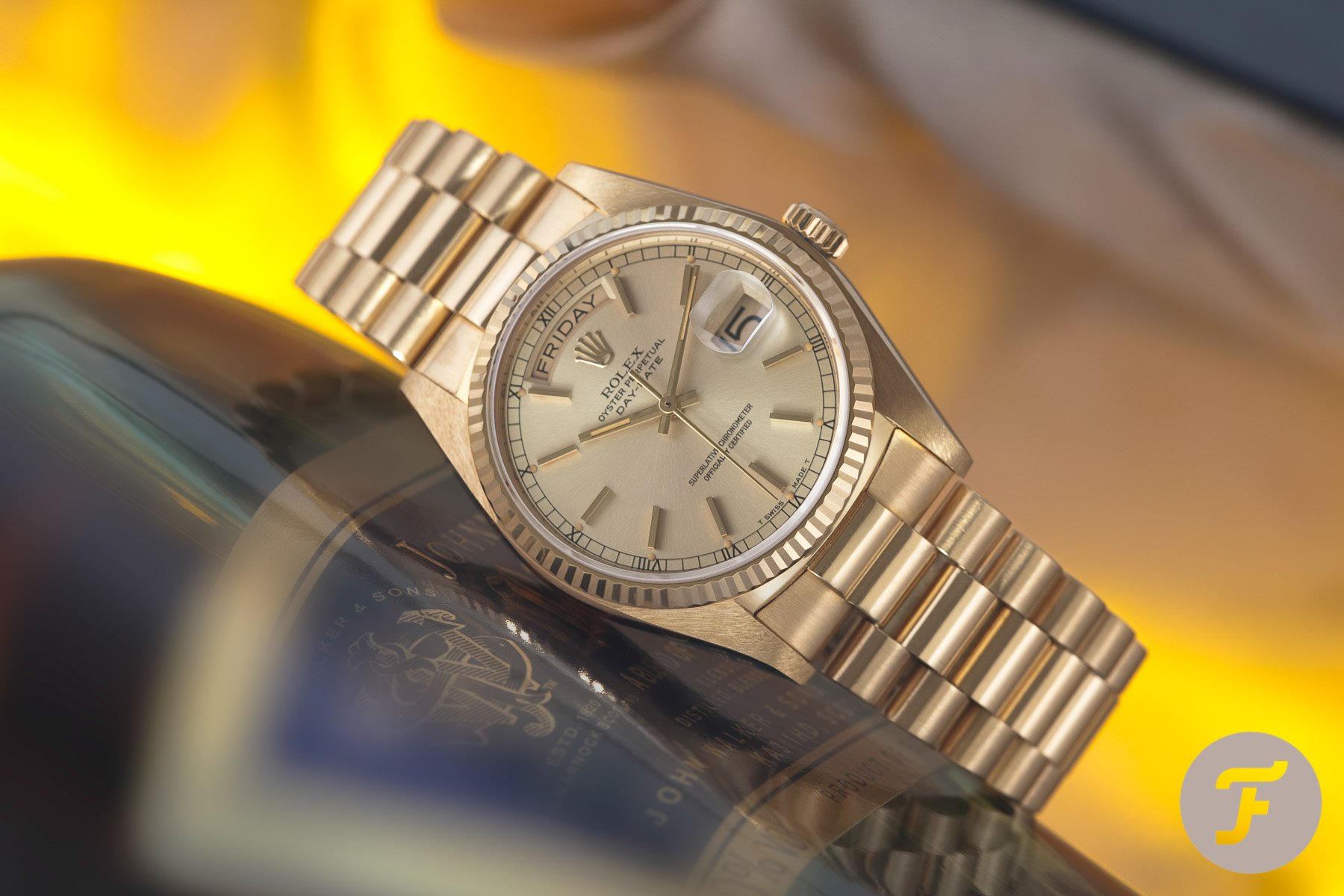 Three years after its debut on the wrist of LBJ, Rolex officially began advertising the Day-Date as “The Presidents’ Watch”. The rest, as they say, is history.

Since being worn by LBJ, the Day-Date has adorned the wrist of Presidents Nixon, Ford, and Reagan. Reports suggest JFK had a yellow-gold Day-Date, gifted to him in 1962 by Marilyn Monroe (during their rumored extramarital affair). The watch was never seen on JFK’s wrist and his secret Rolex sold at auction for US$120,000 in 2005. After Reagan, the Day-Date left office, with Bill Clinton famously preferring a Timex Ironman. Donald Trump has brought the tradition back after being spotted with a Day-Date, but he’s more commonly associated with wearing a yellow-gold Patek Philippe Ellipse. 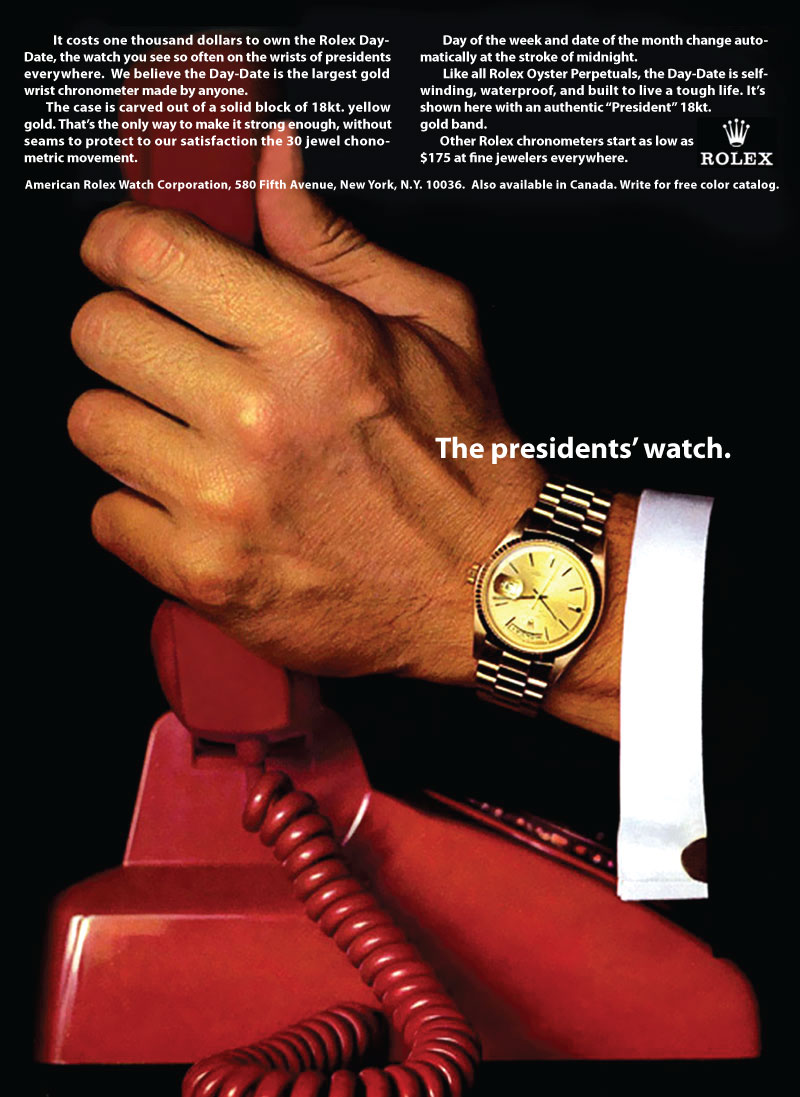 A 1966 Rolex advertisement with a reference to the President.

A source of pride

Rolex proudly displays information about the watch on its website:

“Launched in 1956, the Day-Date made its debut as the first waterproof and self-winding chronometer wristwatch to offer a modern calendar with an instantaneous day display, spelled out in full in a window on the dial, in addition to the date.”

Rolex’s description neatly sums up the importance of the Day-Date to the history of mechanical wristwatches but leaves out the timepiece’s Presidential history. Instead of politicians, Rolex has chosen retired champion golfer Jack Nicklaus as the ambassador for the Day-Date. Nicklaus received his yellow-gold Day-Date in 1966 at a Rolex Party in Tokyo. Rolex’s advertising material generates an association between Nicklaus’ success as a golfer and his Day-Date. 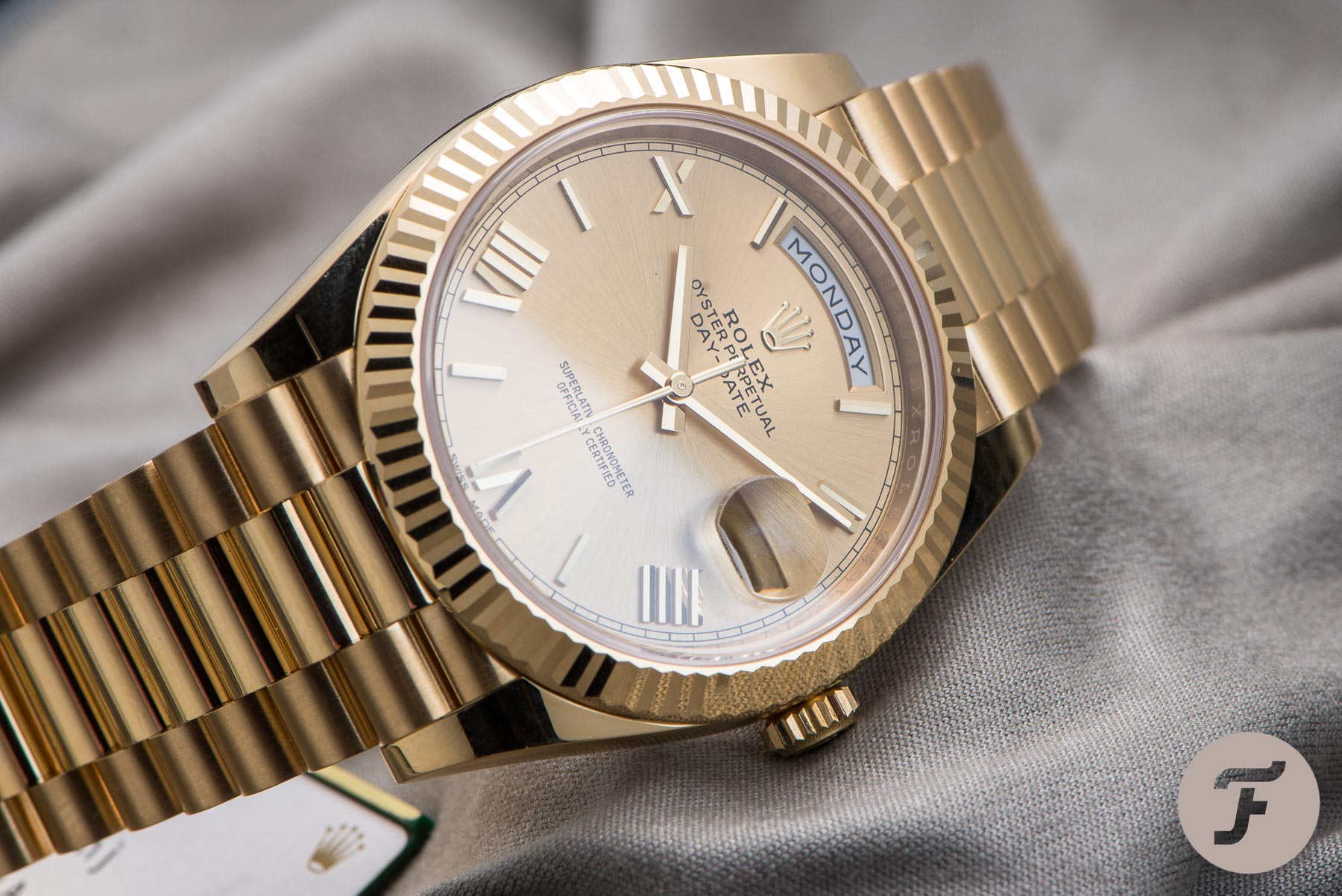 While no longer being advertised as “The Presidents’ Watch”, Rolex still uses the term, “President Bracelet” on their website. The missing Presidential link in Rolex’s advertising could stem from an avoidance of divisive political figures, or that the popularity of the Day-Date has waned among recent US Presidents. Either way, the Day-Date’s recent lack of association with US Presidents may make room for awareness of a watch more prolific with commanders-in-chief, the Vulcain Cricket. 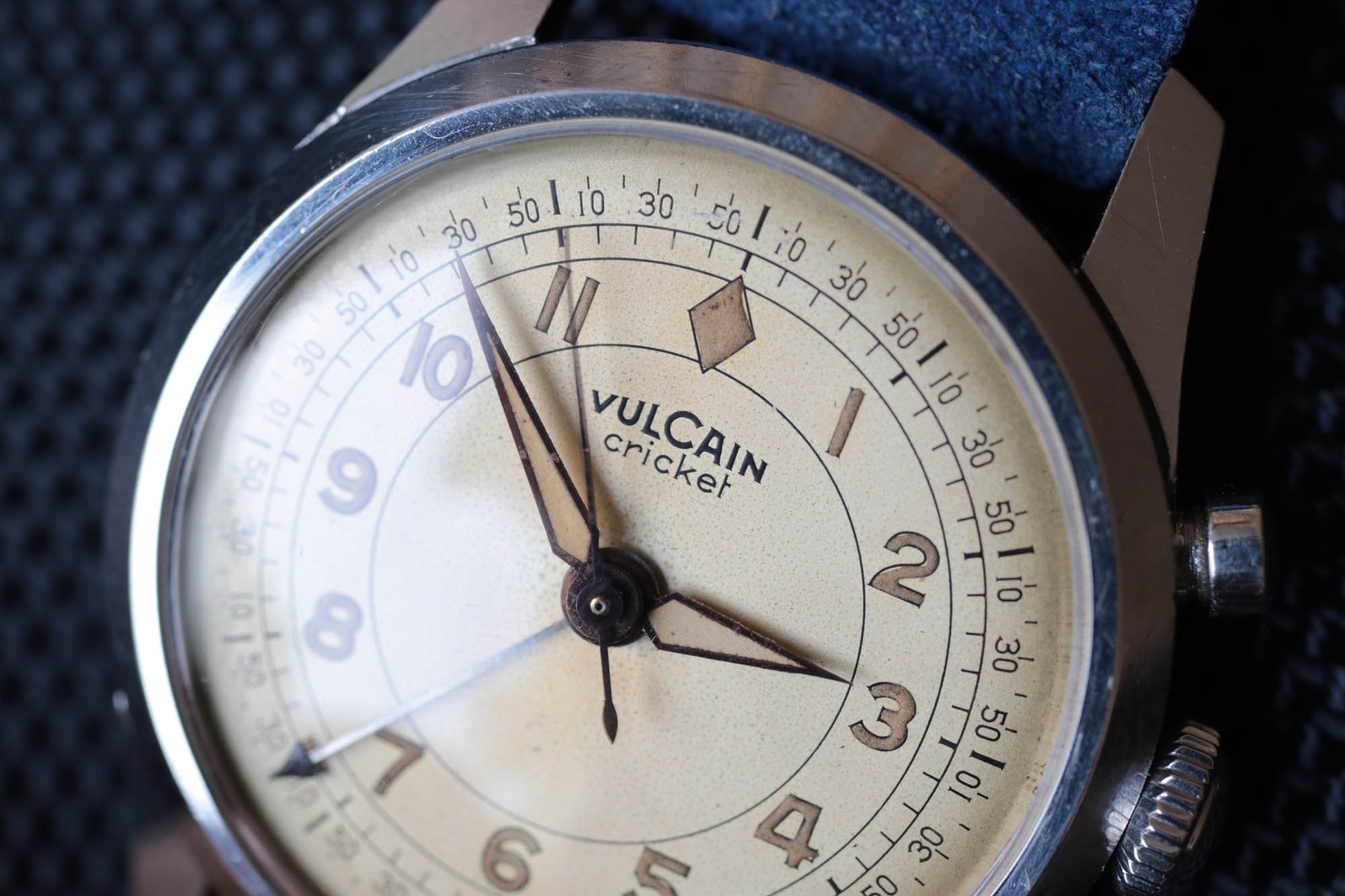 A Vulcain Cricket has been gifted to most US Presidents since Harry Truman in 1953. Truman’s 14-karat yellow gold Cricket was given to him by The White House Press Photographers Association on the night before leaving office. The Cricket is named after its alarm function, which sounds like the titular insect. The first Day-Date-wearing President even loved the Cricket. LBJ had a Cricket made with his signature on the dial. He later ordered 200 Crickets to give as gifts while in office. 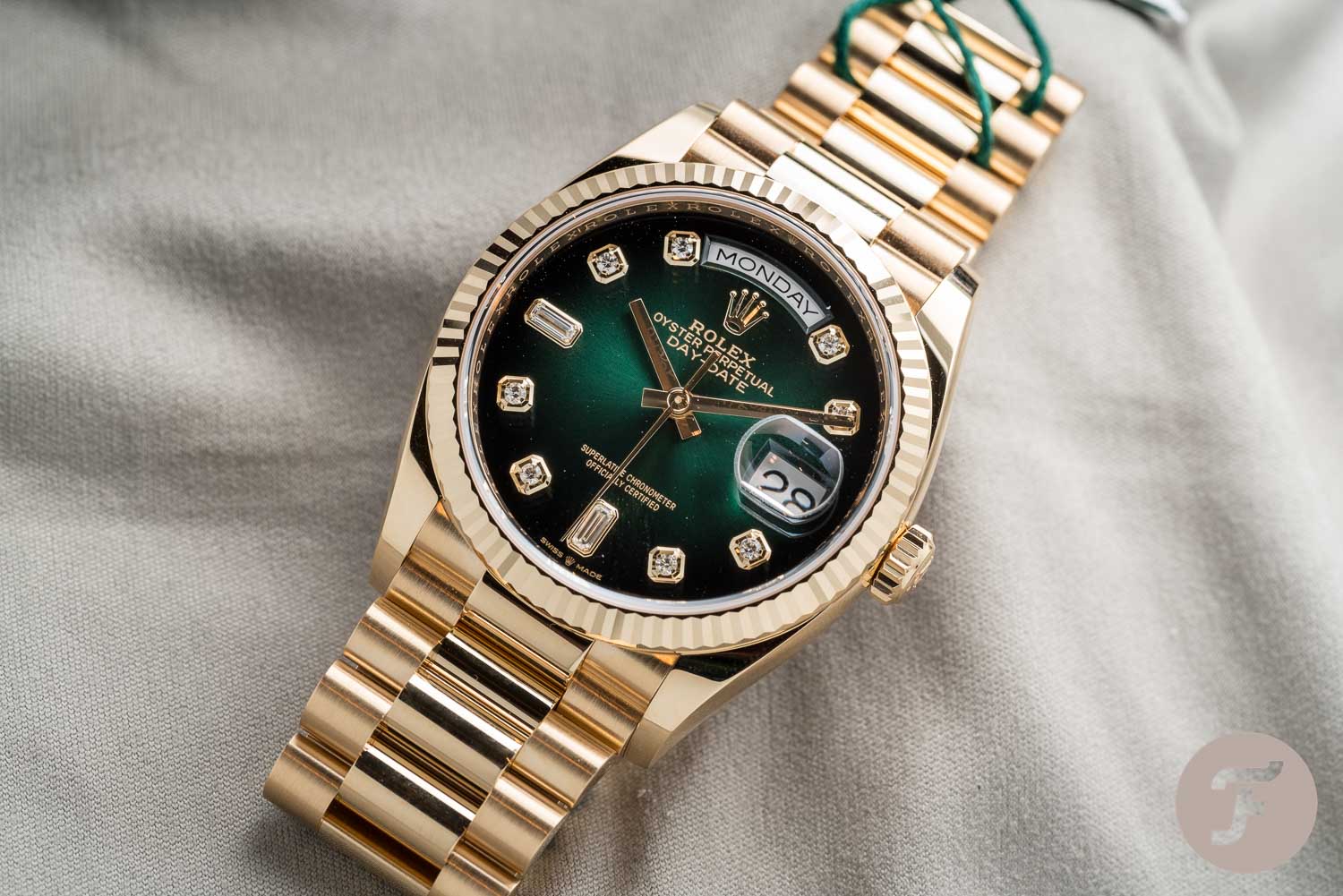 The Cricket hasn’t gained the status the Day-Date enjoys, so it’s unlikely the alarm watch will be flashed by social climbers who seek validation. Unlike the humble Cricket, the Day-Date is becoming more exclusive. The first  Presidentially associated Rolex ads promoted the yellow-gold Day-Date at US$1000. Rolex now advertises new 36mm yellow-gold Day-Dates for US$33,150.

It has its own character and distinct following.

In recent times, the Day-Date has fallen out of favor with the US political elites. However, it remains one of Rolex’s big sellers in the current catalog. The Day-Date is only made in precious metals, (yellow-gold, white-gold, pink-gold, and platinum). As such, Rolex designates the Day-Date as a prestige watch and a status symbol. While most of the press focuses on Rolex’s professional models, the Day-Date is an item of true luxury. It has its own character and distinct following. Underpinned by a fascinating history as it is, and with many extravagant dial variations available now and throughout its history, it is truly the king among the Crown’s finest. Learn more about Rolex here.

Hot Topics
Introducing: The New Seamaster Professional 300M 60 Years Of Bond — With A Special Animated Case Back
100 comments
It’s Time To Invest In A Dress Watch — Our Picks From Breguet, Omega, Grand Seiko, And More
67 comments
Are You Still After An Omega × Swatch MoonSwatch?
65 comments
Sunday Morning Showdown: The Tudor Pelagos Provocation — Pelagos Vs. Pelagos 39
55 comments
The Rolex Waitlist Conundrum — How Much Will The Price Of Your Watch Increase While You Wait?
48 comments
Popular
Rolex Submariner – Historical Overview Of A Diving Legend
Robert-Jan Broer
22
The Ultimate Sports Rolex – The Explorer II Reference 1655
Robert-Jan Broer
17
#TBT A Vintage Seiko Buyer’s Guide to Affordable Goodness
Michael Stockton
32