Should I Keep My Watches Running When I Don’t Wear Them?

One of our valued readers is lucky enough to owe no less than seven watches. Two hand winding, and five with automatic movements. He wears all watches in a rotation, and in short, as far as I understand, his question is:

You Asked Us: Should I keep my watches running, or should I allow them some rest when I don’t wear them?

Here’s the full original text of the reader’s question:

I am a fan of Fratello Watches and I read your articles every day [author: thank you very much!], being a watch enthusiast. I have 2 Speedmasters which are manual winding and 5 automatic watches: a GMT, a Submariner, a Daytona, a Seamaster 300 and a Railmaster.

I wear all of them in a rotation but while they are waiting for their turn for wrist time, they stop. My question is if this starting and stopping would have a detrimental effect on the mechanism of the watches or are they better off, being given “rest” when they are in the safe.

I heard conflicting information about this. Some say you need to keep the watch going always as it prevents drying out of lubricants and increase the longevity of the movement. On the other hand, wouldn’t constant running wear down the pinons on the wheels faster and shorten the life of the movement?

I would be grateful if you could shine a light on this matter and help keep my precious collection with longer service intervals. 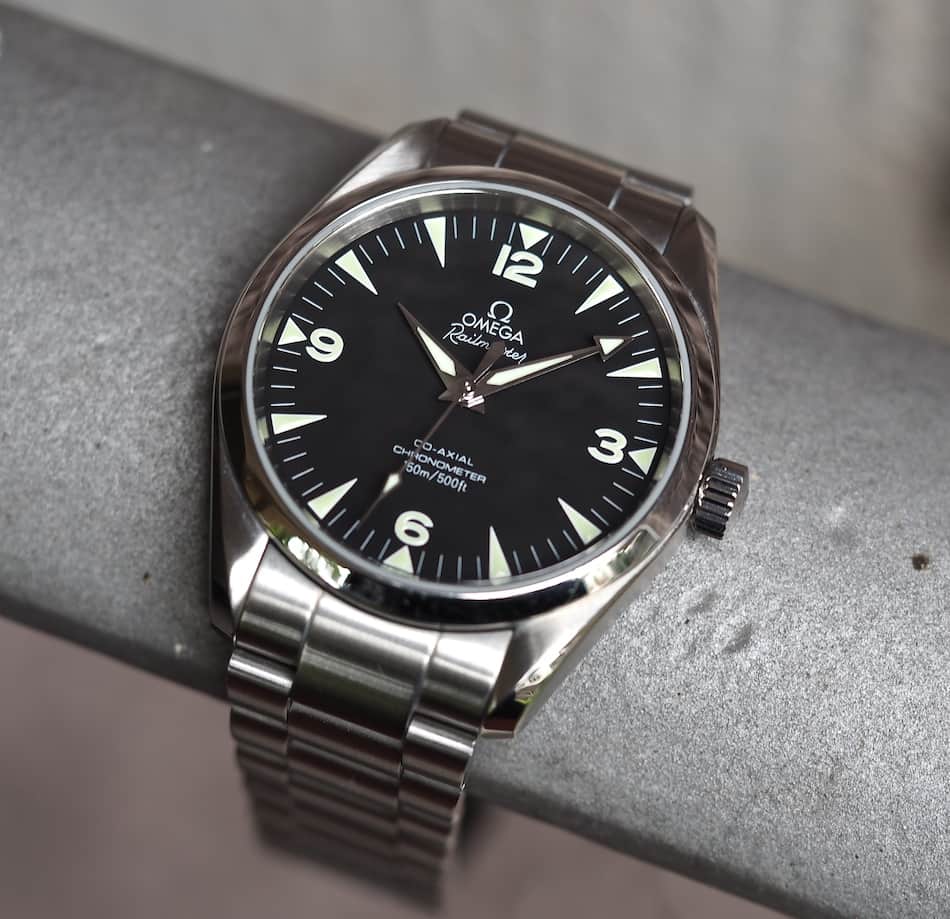 As our reader already points out, this is a complex situation, or at least a situation were many different answers can be heard. Before going in-depth into technical detail, I would like to shed my personal light on it. 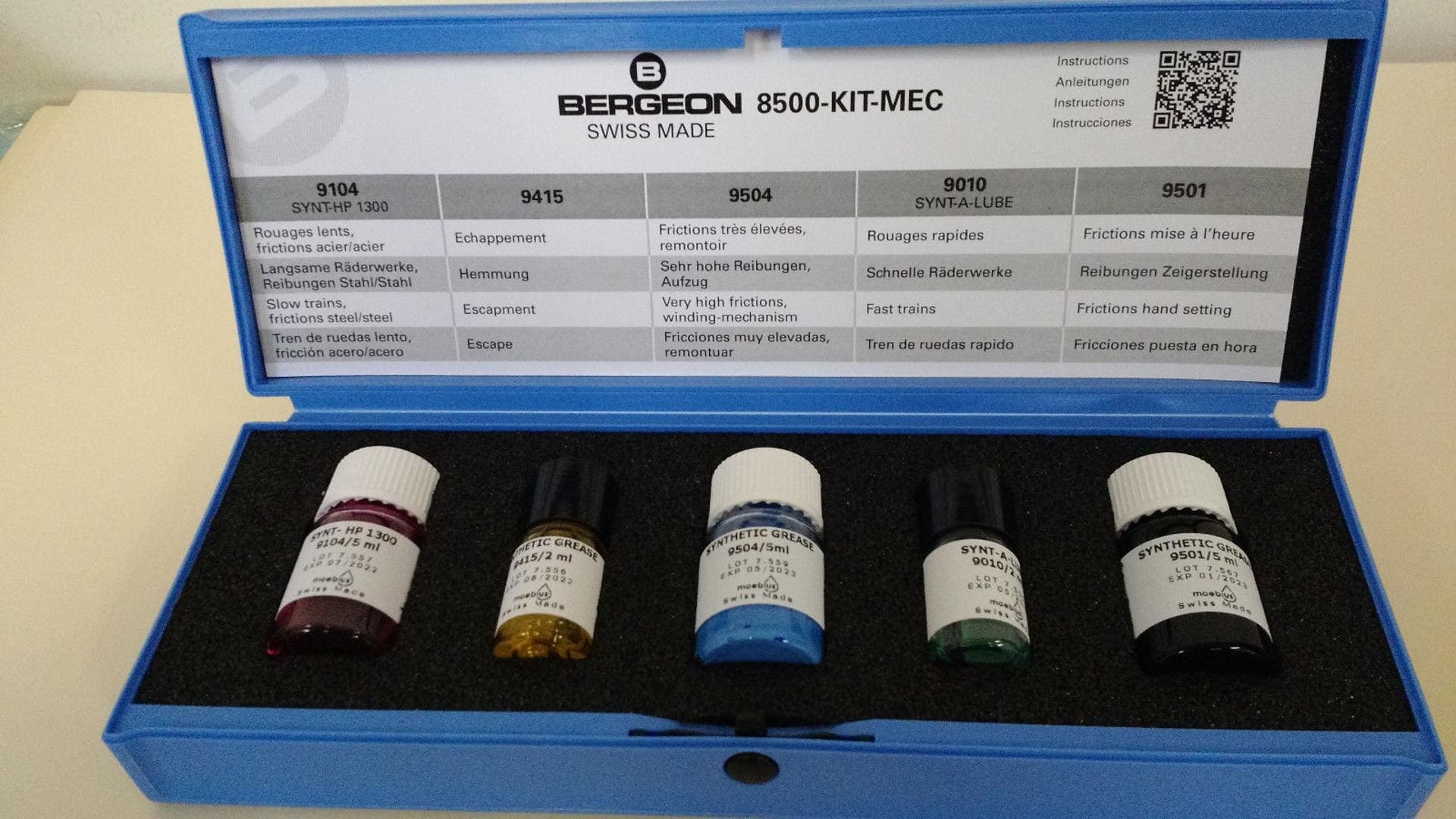 Then there’s the situation that a watch isn’t running. And here’s the conflicting information part which our reader mentions. Some watchmakers say that the lubricants will dry more quickly when a watch movement isn’t running. The lubricant becomes static and might be prone to drying in. Others who deny this or not, are in the opinion that once the watch will be worn again, and the lubricated bearing points come to their operating temperature again, the lubricants will be revived and do their work like before.

We Aren’t Watchmakers, So Let’s Ask Them

We’ll be honest, this goes beyond Fratello’s expertise as well. Because we understand this might be an important point for many of our readers we asked the opinion of a few seasoned watchmakers.

And in this kind of situations, my first stop always is our legendary and in-house Fratello diva watchmaker Paul. After posing the question through one of the messaging systems, he picked up his gold (and diamond paved) Vertu phone and gave me a call. And his answer was as follows: 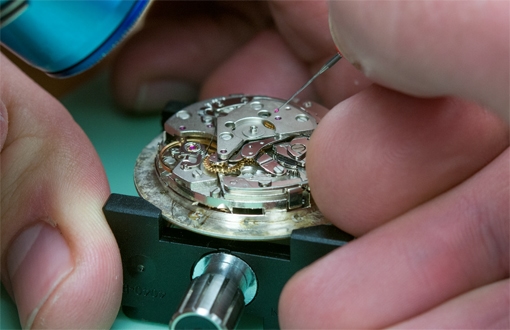 “If they were my watches I would never let them run while I don’t wear them. The lubricants won’t dry out faster when the watch has stopped than when it’s running. And when a watch is running, there’s always the possibility of wear. If it’s not running there simply isn’t.

Of course, theoretically if all lubricants are in ultimate condition there probably won’t be any wear, but when and in which situation will this be the case. You’ll never know for sure. Lubricants can be contaminated inside the movement for whatever reason, and lose their optimal lubricating values.

Let’s put it this way; if you don’t use your car you won’t let it run as well, do you? In the end, would you like to have a watch, or a car, that has been running for seven years or one that only ran for a year?“

Well, that was a clear answer. However, Paul admits that it’s no scientific answer. The chances alone, with a running watch, that at some point something with the lubricants isn’t exactly optimal, make him choose for stopping a watch when not wearing it.

A second opinion comes from Jan Ubels. Jan is the owner of ‘De Klokkenmaker Technisch Uurwerken Centrum’ (ubels-uurwerkreparatie.com) and has been watchmaker for 25 years now. Here’s Jan’s take on our reader’s question:

“In my personal opinion there’s no need to use a winder, and it doesn’t harm to let unworn watches come to a standstill. Except probably for watches with complications like perpetual calendars [red. which isn’t the case here]. Then a winder will give more comfort and fewer possibilities to damage the setting construction.

Of course, nowadays there are many different kinds of winders. Some rotate all day, some only intermittent which of course is much better. Ever since 2006, when cheap winders were introduced at the HongKong Watch Fair and became a hot item, we see many watches coming in with major wear. And then mainly at the winding construction of the watch.

Using the right quality synthetic oils and greases prevents the problem of drying in. This problem nowadays exists much less than with the use of the earlier non-synthetic lubricants. And then as well, it’s much better to have an undamaged watch which just needs relubricating at a service, than a watch with a lot of wear and tear in the movement because it ran all the time and became badly lubricated in the end.“

I don’t know if Paul and Jan often talk to each other, however, Jan as well made this comparison:

“It’s just about clever thinking, you won’t let the engine of your car run when you don’t use it, do you? “ 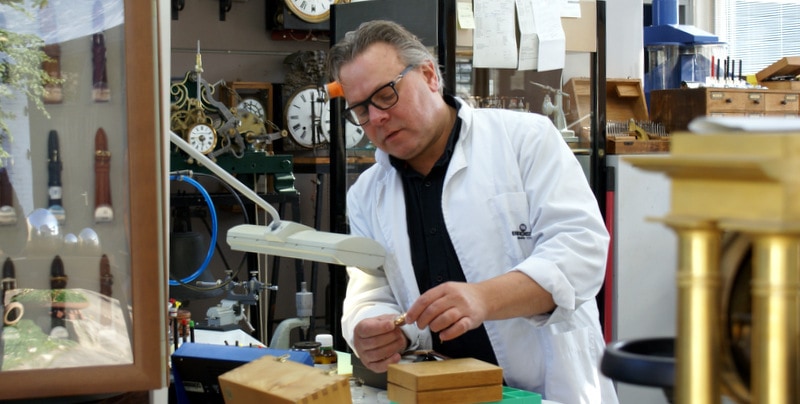 Jan Ubels in his atelier

So in total, that was more or less the same answer as Paul has given. Both relying on personal experiences, so they’re real-world practical, more than theoretical, answers. It looks like we know where we’re heading. Just let your watches stop when you don’t wear them.

But here at Fratello, we are keen on good journalism, and that’s why we decided that we need an extra, third, opinion. Therefore we asked one of The Horological Brothers (www.gronefeld.com), Tim Grönefeld, as well. Here’s his take on this question:

“That’s a question of how much time you have in the morning. If you normally get up late for any reason [author: Tim’s version was slightly different, however, didn’t make it through the spell checker] and don’t have the time to wind and set your watch, I would make sure all my watches were running. This is especially valid for watches with many complications [author: again, which seems not the case for our reader who asked the question] like moon phase, perpetual calendar or planetarium.

Besides, it takes some time to set a complicated watch, setting these complicated watches can easily cause damage as well. There are many parts, for instance, the thread and gasket of the winding crown, but as well the setting mechanism, which has to withstand high forces when operated. And then the damage is easily done. So a watch winder mainly means more safety and more comfort.

As far as wear is concerned. On a high-quality watch winder, the watches won’t wear any faster than when worn. And a watch needs an overhaul every 5-or-so years anyhow, worn or not worn. The lubricants just need to be replaced after such a period as they age. Not only by lubricating the movement, however just because of ageing as well. So seen in this light it really doesn’t matter what to do, have them run or not.

For a beautiful automatic watch, which we consider a luxury product, we would always advise a high-quality watch winder. One that doesn’t rotate too fast and doesn’t make too many rotations.“ 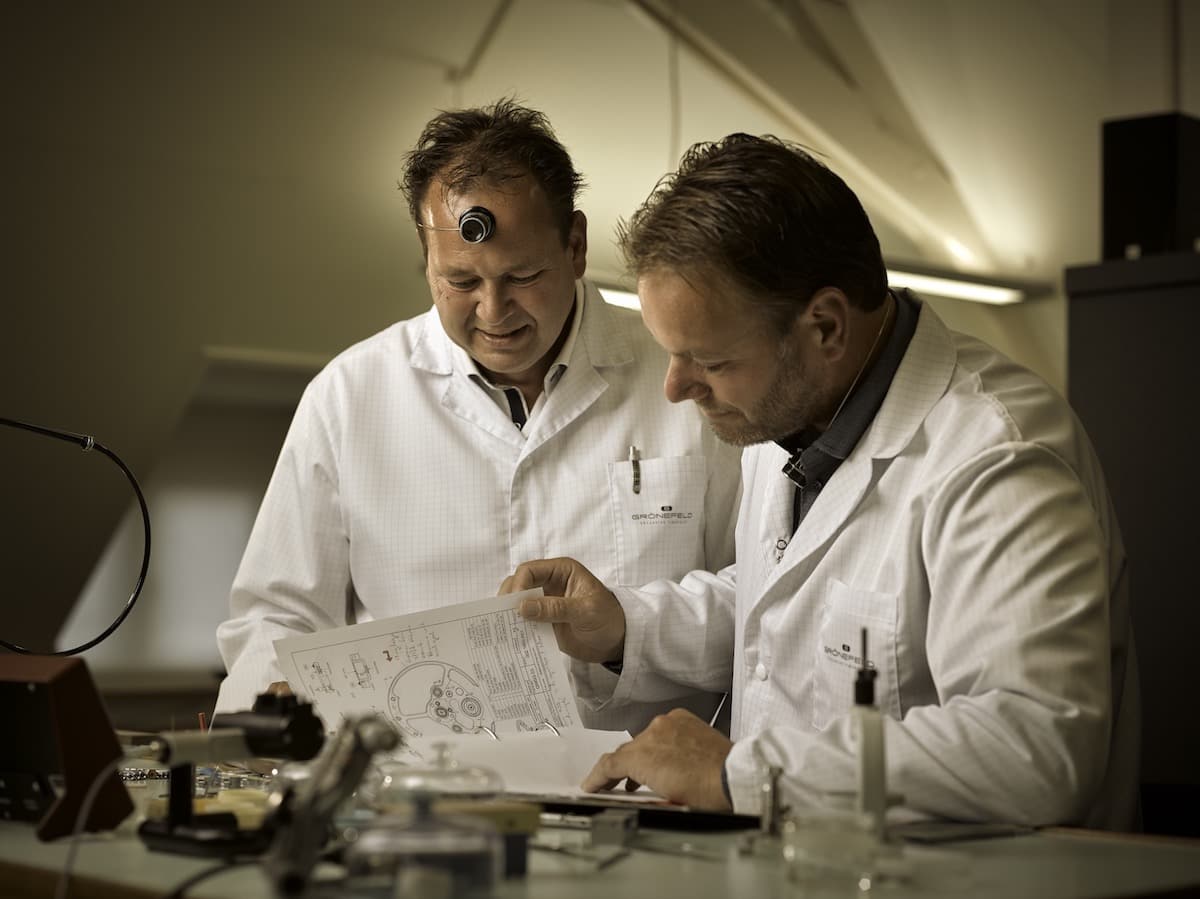 Tim (L) and Bart Grönefeld in their atelier

Hmmm, that looks like a different take to our reader’s question. In short, a watch will not wear out on a watch winder faster than it will when worn. Tim even added: On your wrist, it will be exposed to greater forces (certainly the winding construction) and larger differences in temperature than on a watch winder. It needs to be serviced anyhow because of the ageing of the oil, so it really doesn’t matter what you decide. For comfort put unworn watches on a watch winder; if this doesn’t matter to you just have them stopped.

That asks for even another opinion. Promised, it’ll be the last one. We asked Andrea van Steijn, she is a master-watchmaker at Steltman Watches (retailer of many high-end watch brands, including Patek Philippe, Breguet, MB&F and Grönefeld) in The Hague, Netherlands. Here’s her reaction:

A watch winder is specifically interesting for complicated watches, like perpetual calendars, if they’re not worn on a daily basis. It prevents the owner from setting these delicate movements. And of course, watch winders are nice gadgets as well. And even if there would be extra wear on the automatic winding construction of a watch because it has been running. This wouldn’t make the costs for an overhaul any different as it’s always calculated for in a regular overhaul.“ 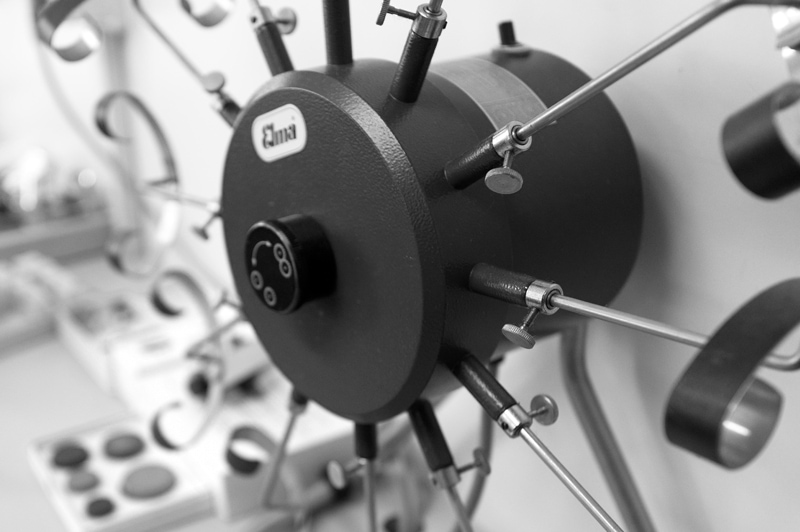 That leaves us with 2 against 2, ‘better to stop the watches when not worn’ against ‘it doesn’t matter they need an overhaul anyway’. This reflects the fact that our reader mentioned that he heard conflicting information about it. But at least we have four well substantiated stories all with clear answers.

Certainly the last part of the question from our reader becomes quite clear. He’s looking for an answer in order to help him keep his precious collection with longer service intervals. And that’s quite clear, neither way – stopping or having the watches running on a watch winder – will result in longer service intervals. A regular watch needs a regular service every 3 to 5 years because of the lubricants ageing.