A few weeks ago, which seems like an absolute age after spending the best part of two weeks sunning myself to a crisp on the beaches of Mallorca, I visited anOrdain’s headquarters in a sunny but not quite so unbearably hot Glasgow. It was, as I think the stories I shared on Fratello’s Instagram at the time (and will share again on my own account today for all those that missed them), a wonderful day. The team welcomed me into their workshop with open arms, and I left even more impressed with an outfit I’d been fond of, to begin with. Today, I’m reporting on last week’s limited edition release in conjunction with Worn and Wound. And, I must say, it’s something rather unusual for a brand that made enamel its calling card up until this point…

Gold-plated metal dials. That in itself is hardly revolutionary, but, in typical anOrdain fashion, the result of this project stands out as decidedly different. Most dials are made from brass, painted, and then pad-printed using (often) traditional methods, resulting in an easily digestible and totally unchallenging display. These limited edition anOrdain Model 1 pieces are the exact opposite. The apparent bareness of the material is striking. The dished chapter ring gives the dial a sense of motion that is hard to describe. It is crisp, clean, and clinical in many ways, but somehow it has the same organic bent as anOrdain’s “standard” models. 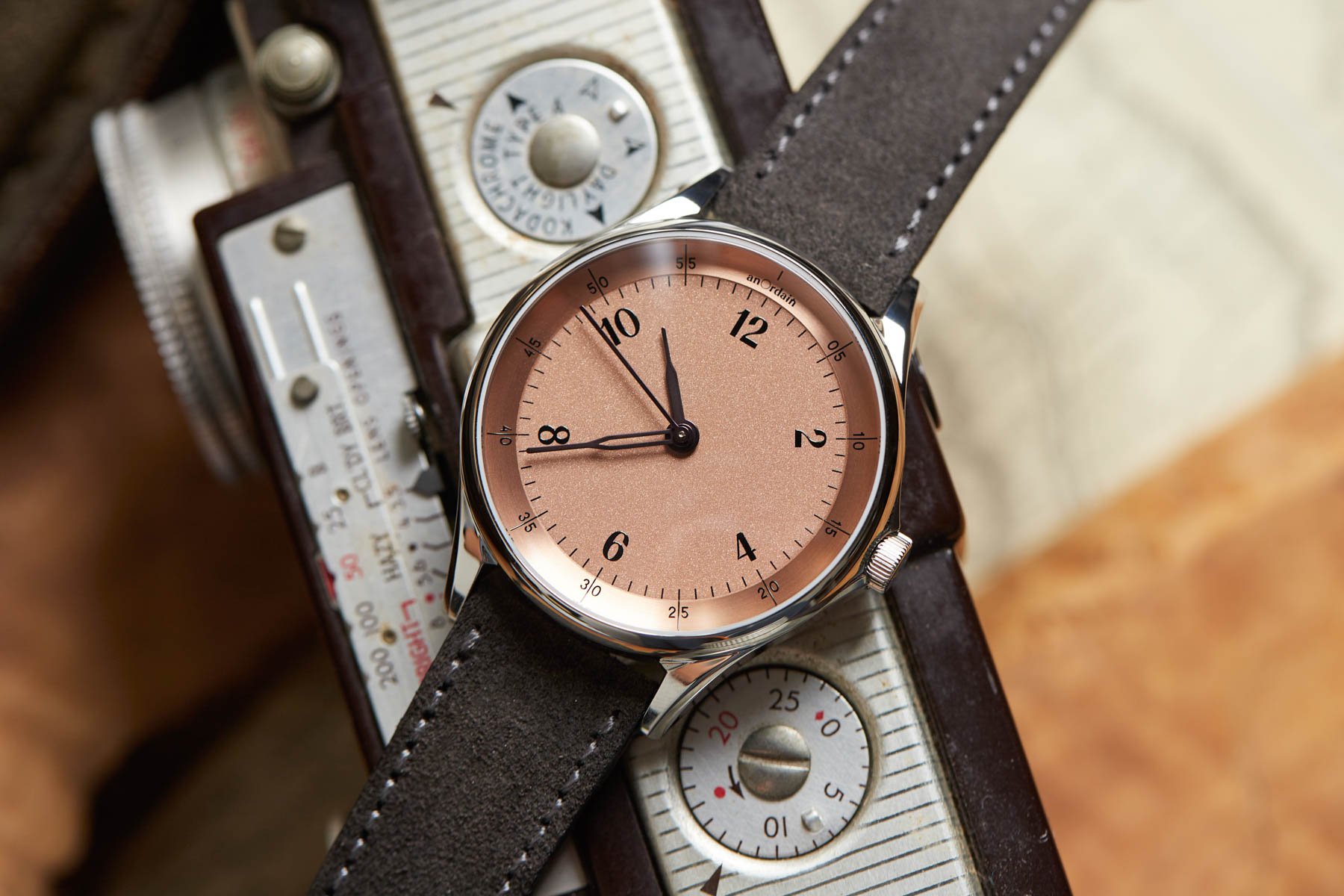 The fact that hand-enameled dials, pad-printed with some of the most beautiful inks in the industry can be referred to as “standard” in any context is almost laughable. Everyone’s favorite Scottish brand has once again flipped the script, held it up to the Sun, and let the light shine through, revealing the same artisanal mission statement that brought the company to its current position of esteem among collectors.

Unsurprisingly, this 38×46×11mm stainless steel Model 1 (with an 18mm lug width) from the minds of anOrdain and Worn and Wound is limited. Each piece will be produced just 50 times before this design is knocked on the head (at least in this specific setup). It is sometimes hard to gauge the exact level of demand for a brand that frequently sells out models in the blink of an eye. Could this run have supported 100 pieces? 500, maybe? Or is anOrdain nailing not just its products, but its volume strategy by coming very close to, but managing not to exceed 100% market penetration?

As I said, it’s impossible to know for sure until the brand runs into a brick wall and finds itself sitting on mountains of product that just won’t shift. The recent change in production strategy, moving from a serial model to a batch-production model, was implemented to manage customer expectations and free up the brand’s brilliant brains for more creative endeavors. In light of anOrdain’s current cachet, that strategy seems unlikely to yield any more useable data regarding volume efficiency as one would imagine the batch strategy will see even fewer of each model variant made available (but, thankfully, a bucket-load more options to choose from).

What do metal dials mean for anOrdain?

I must admit, had Lewis Heath approached me before commencing with this project for my opinion, I might have been skeptical. It’s hard to be positive after the fact, having seen and fawned over these new watches in the metal, but I’m pretty sure my generally conservative approach to brand building would have landed me squarely on the fence. Why? Because anOrdain is enamel. The brand’s mastery of this time-honored craft and the achingly beautiful execution of those skills make all the difference. Producing a watch without any enamel anywhere to be seen? That, to be frank, would have scared the bejesus out of me. 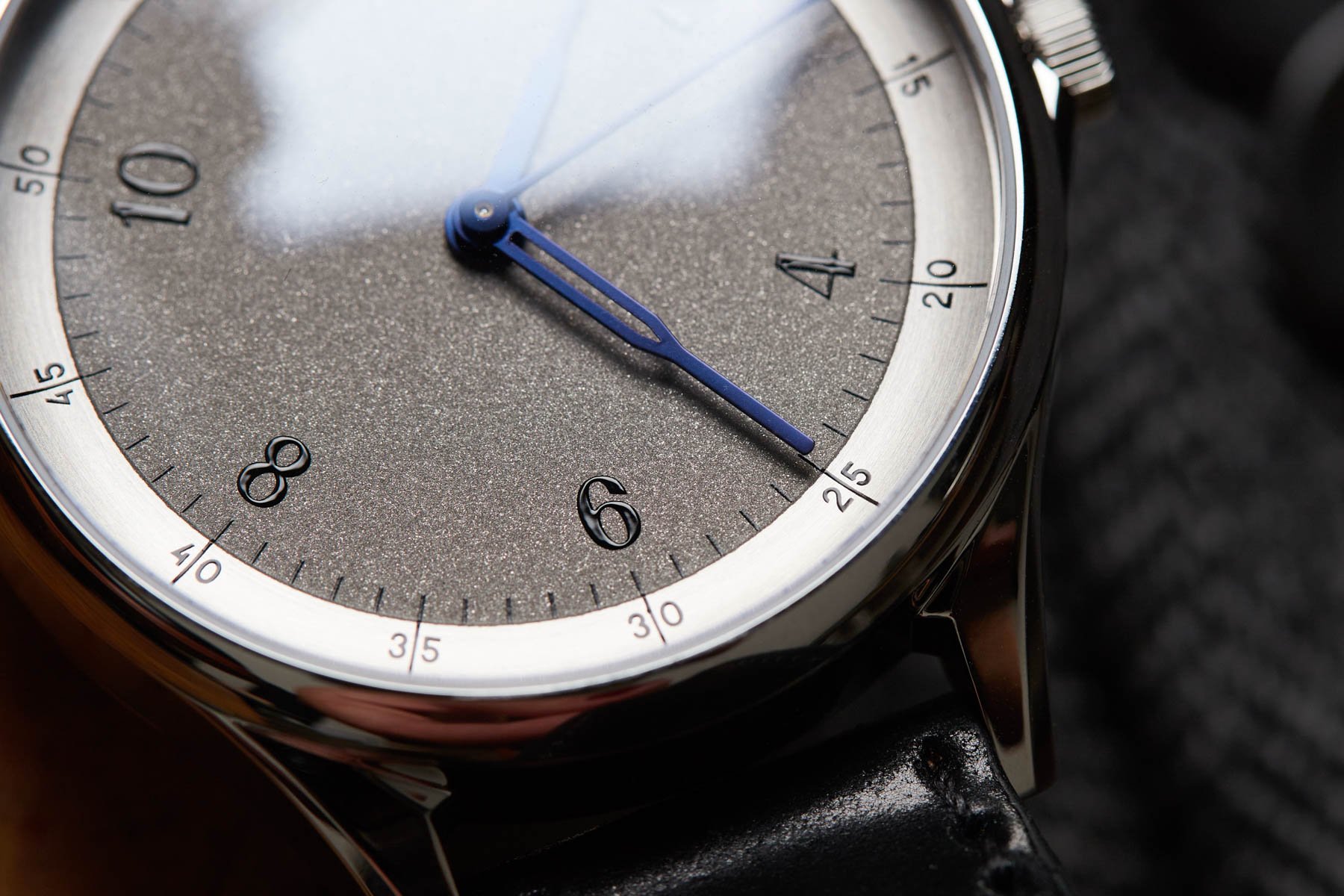 However, anOrdain succeeded and it took me a little while to figure out why. Well, perhaps not that long, but long enough for me to feel pretty foolish about it anyway. You see, while I, and I think most people, had spent my time and energy focusing on the enamel and only the enamel, I’d somehow missed the standalone power of the typography and handset designs that anOrdain has also made its calling cards. 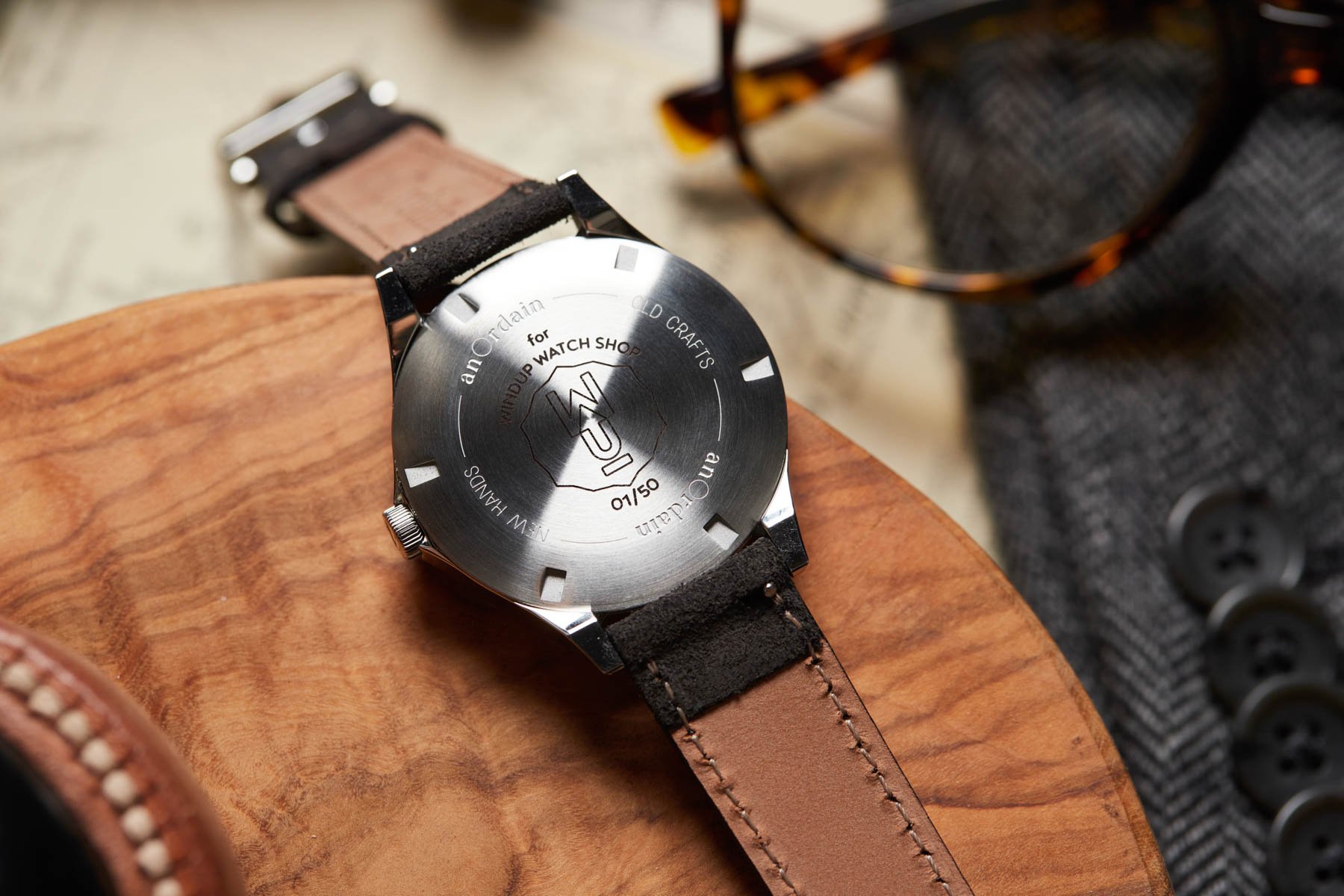 Of course, I’ve praised the creative font design of the brand openly before, but I’d done so in the context of its application to the very special dial surface. Rather shallowly, I hadn’t appreciated just how strong a brand identifier it was. Now, seeing it removed from the enamel base it has thus far called home, I can appreciate that this brand is much more than the scintillating enamel skills we associate with it. 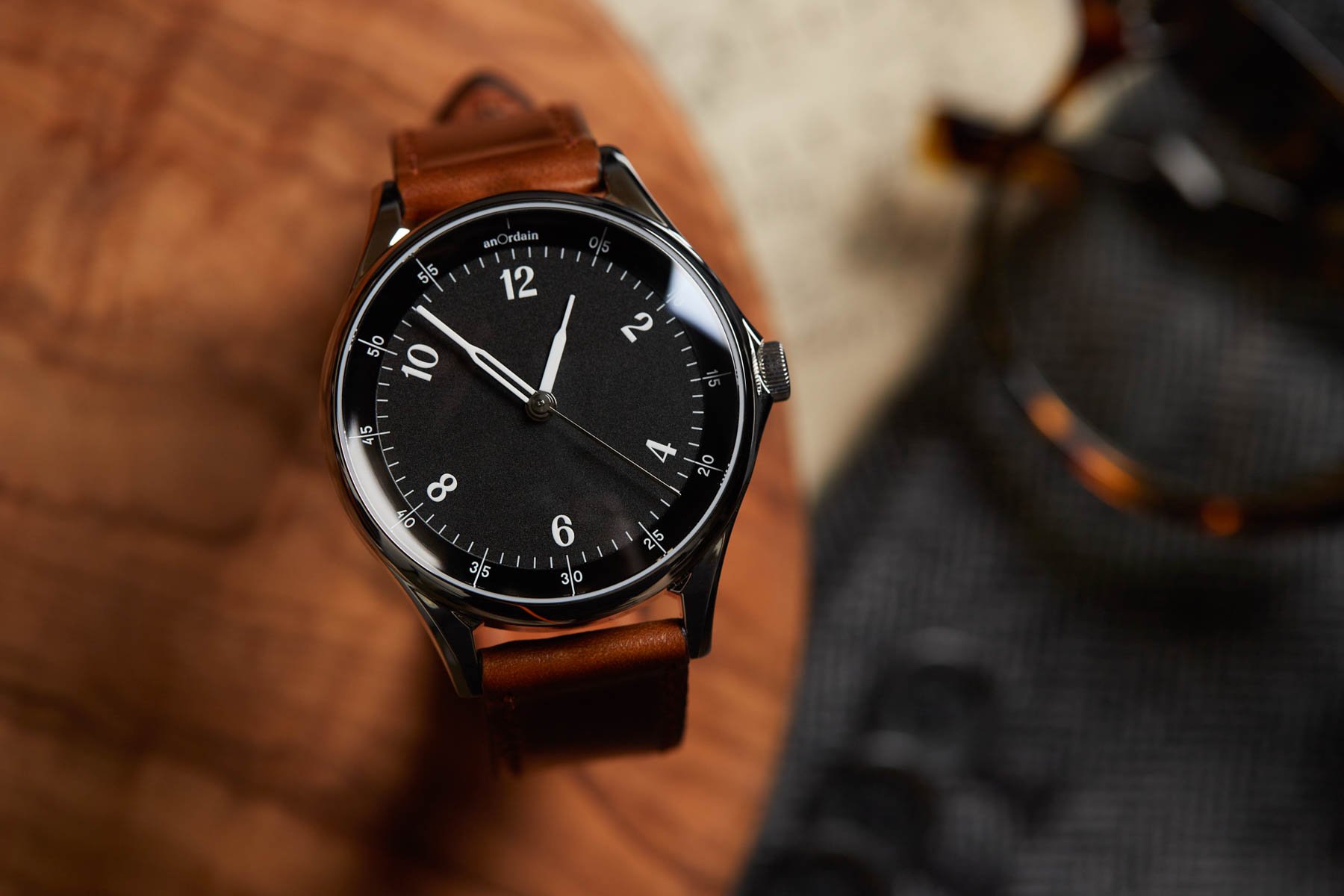 This is, to my mind at least, simultaneously exhilarating and terrifying. AnOrdain must now, perhaps for the first time, countenance creativity in a much broader scope. This limited model has paved the way for a bare metal model to enter the core collection, for new, more affordable designs to enter the catalog, for wilder, even more unexpected experimentation to take place. 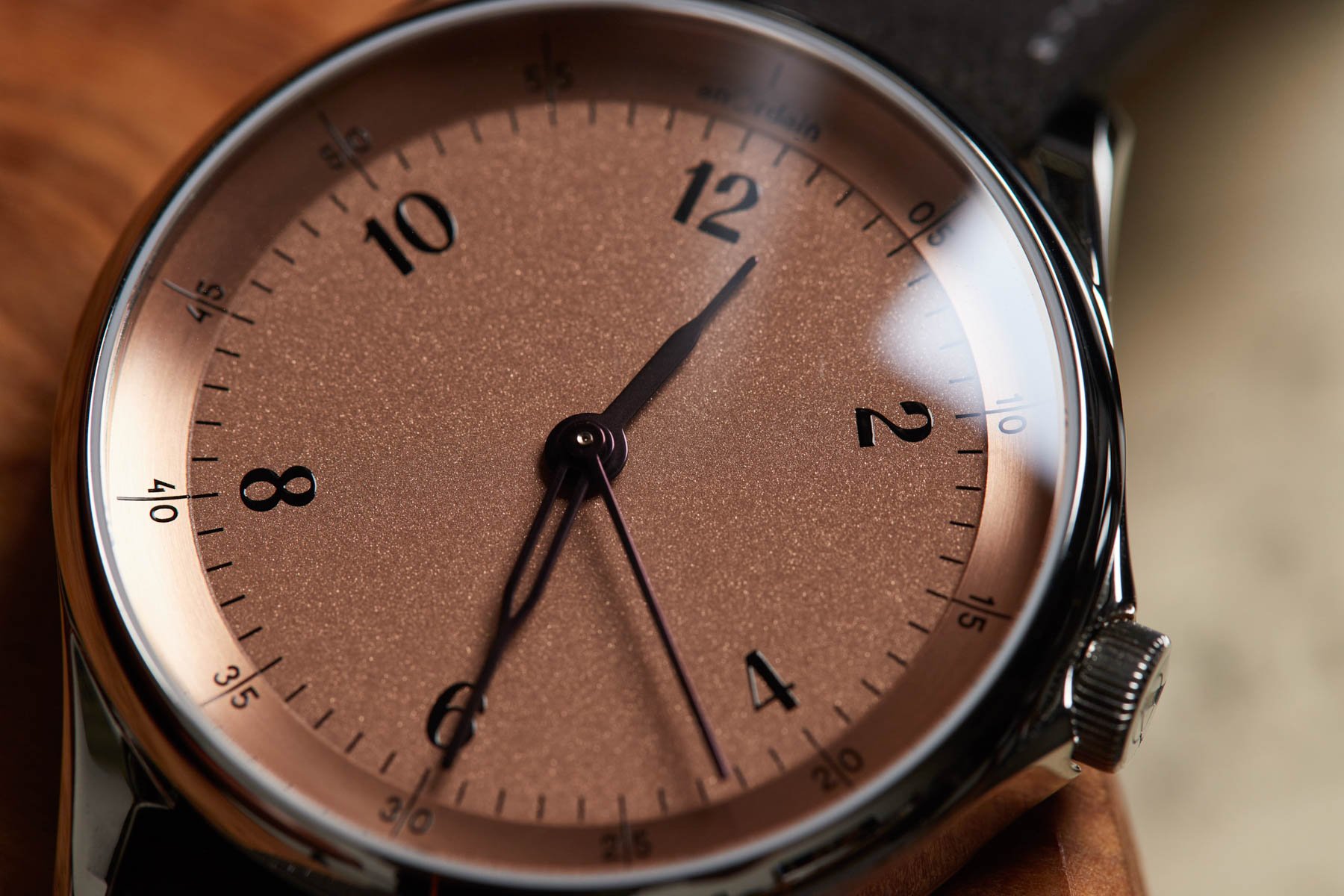 As fans of watchmaking, this is only good news. As a group of watch lovers quite clearly emotionally invested in one of the industry’s most exciting young brands, we must hold our collective breath. Not so much in anticipation of failure or a misstep (both seem unlikely given the methodical thought processes going on behind the scenes), but for the possibility of new and even more exciting watches that look set to drain our watch funds yet further.

I would wager that’s about the worst thing we have to worry about. And if that bears out to be correct, that’s not such a bad thing at all. Learn more about anOrdain here, and check out the (soon-to-be-sold-out-I’m-sure) limited edition for Worn and Wound, which you can do by visiting the windupwatchshop here. At the time of writing the rose gold model has sold out but the white and black gold models remain. The price? A tempting $1,250.

Hot Topics
Introducing: The Omega Speedmaster Super Racing With Spirate System
165 comments
Design Vs. Specs — Which Is More Important To You When Buying A Watch?
87 comments
New Release: The Limited-Edition Seiko Prospex SLA067J1 Diver
63 comments
My Predictions For New Omega Speedmasters In 2023
60 comments
The Best Independent/Microbrand Alternatives To The Rolex Explorer In 2023
53 comments
Popular
You Asked Us: Tissot Powermatic 80 Seastar 1000 or Longines HydroConquest
Robert-Jan Broer
20
Hands-On With the Seiko Prospex SRPC91K1 – Save The Ocean
Robert-Jan Broer
15
You Asked Us: Nomos Orion as a dress watch?
Gerard Nijenbrinks
10