Antiquorum is the only major auction house which exclusively focuses on timepieces. The Antiquorum Geneva team is headed by Julien Schearer accompanied by Etienne Lemenager who are both passionate watch aficionados and collectors. Although this auction house has seen its fair share of ups and downs, we do enjoy talking watches with them and appreciate the friendly atmosphere there.

We have been pretty adamant about the need for auction houses to keep their catalogs slim and concise. Generally, Hong Kong watch auction catalogs are known for being larger than their Geneva counterparts, but in any case big catalogs are exhausting for everyone. Antiquorum’s upcoming auction in Geneva was super sized due to a large collection of pocket watches, mostly Urban Jürgensen, we still enjoyed visiting them and hunting for some of their more interesting wristwatches and some cool objects too.

The Antiquorum watch auction, which takes place on Sunday May 15th in Geneva, is comprised of a whopping 478 lots. This is a large catalog compared to the other Geneva auctions, but considering the large size of the pocket watch collection included in this catalog, we focused our attention on the wristwatches. In doing so, we found an eclectic mix of interesting timepieces from a variety of brands that have reasonable estimates. There is even a pair of Patek 3970 Perpetual Calendar Chronographs with seemingly inversed estimates and will be fun to see what the platinum one does with such a low estimate.

We made the following selection of watches that we found interesting: 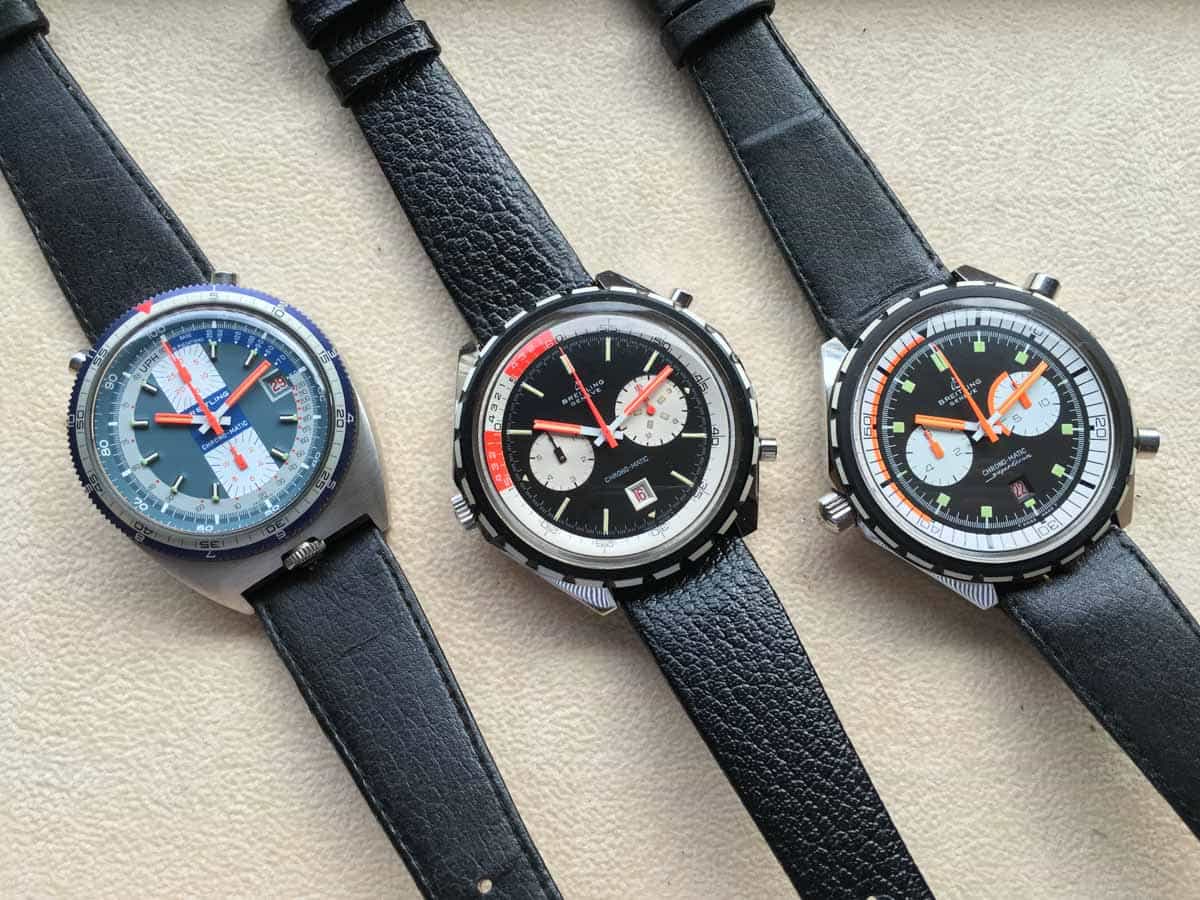 We have seen quiet a few Breitling new old stock watches appear in the market over the past few years. Apparently, when the company changed hands in the early 1980’s a large stock of 1970’s Breitling mechanical chronographs were undelivered and left untouched. These watches were never retailed have the stock stickers on the backs. One of the downsides of this is that movements dry up over time and usually always need an overhaul. The upside is that the condition doesn’t get any better and these are really cool looking pieces including a ‘bullhead’ style chronograph called the Pupitre, a large Yachting Co-Pilot and screw crown Superocean chronograph. 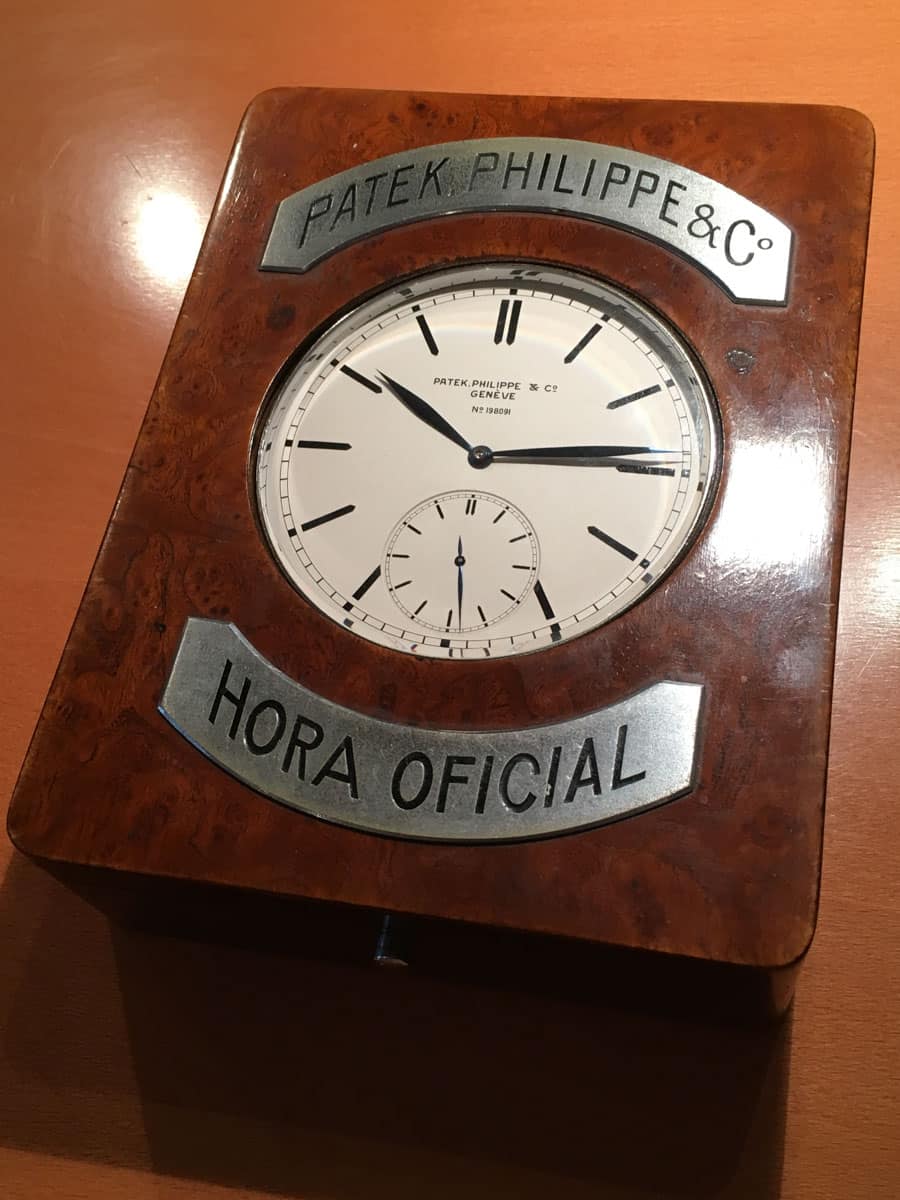 When it comes to doing retail presentation properly, Patek Philippe has always been a reference. This retailer clock movement is simply stunning. The name observatory or observatory chronometer means that the movement was tested for accuracy for over a month at an observatory such as in Geneva or Neuchatel. The testing standards were far more stringent than those of the COSC today. This clock apparently came from Montevideo, Uruguay directly from a descendant of the Patek retailer at that time. It says ‘Hora Oficial’ on it, which means official time in Spanish and appropriately so considering the high precision movement. 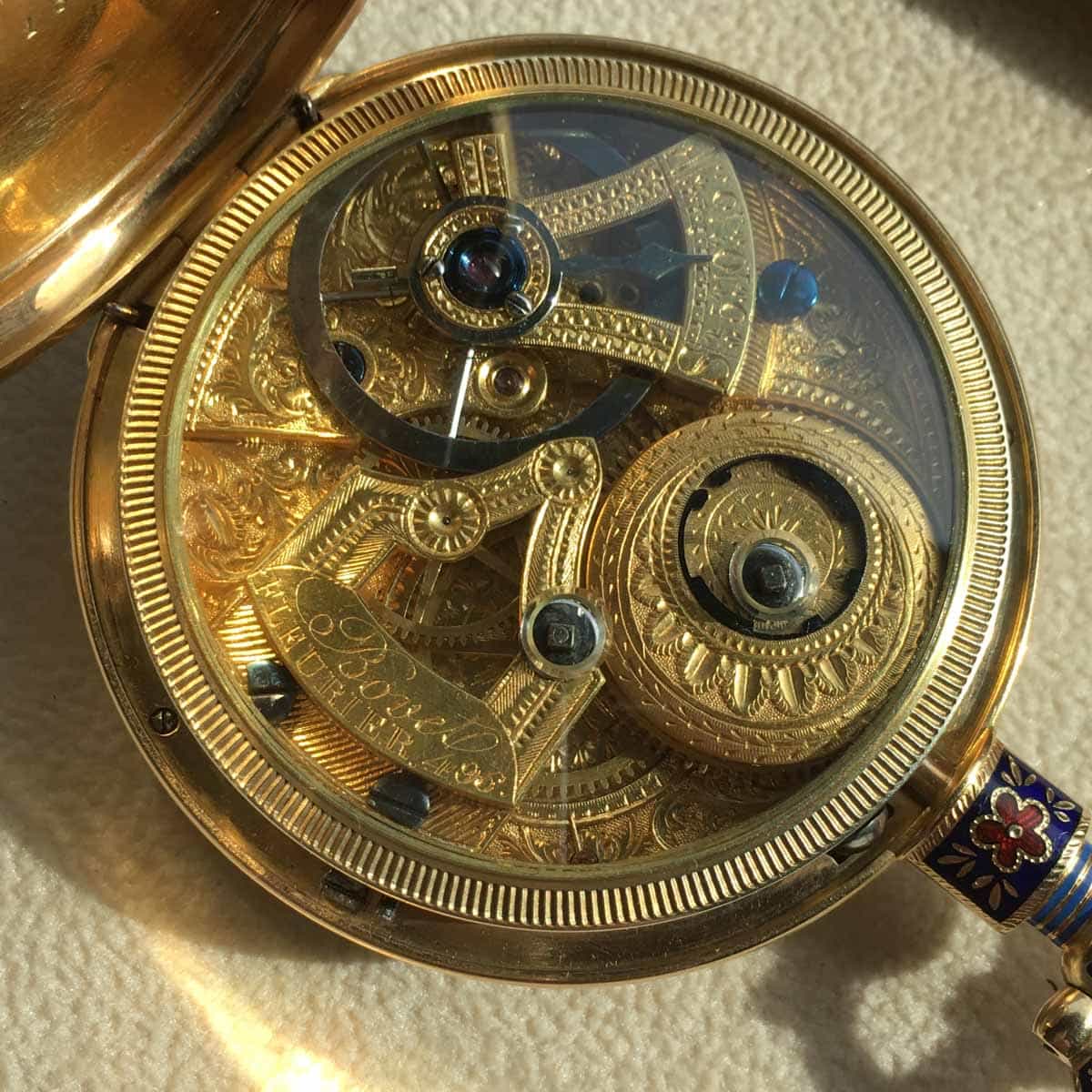 OK, so I lied. We did look at some pocket watches. My brother and I used to work for Bovet before we opened our vintage shop. When it comes to enamel pocket watches made for the Chinese market in the early nineteenth century, these are some of the finest. Some interesting history is that Bovet was known for its finely hand-engraved movements and was the first to use hand blown glass display movement covers. This is the equivalent of today’s sapphire display case back. A very nice example here with a fired enamel miniature painting of exotic birds should do quiet well due to its immaculate condition. 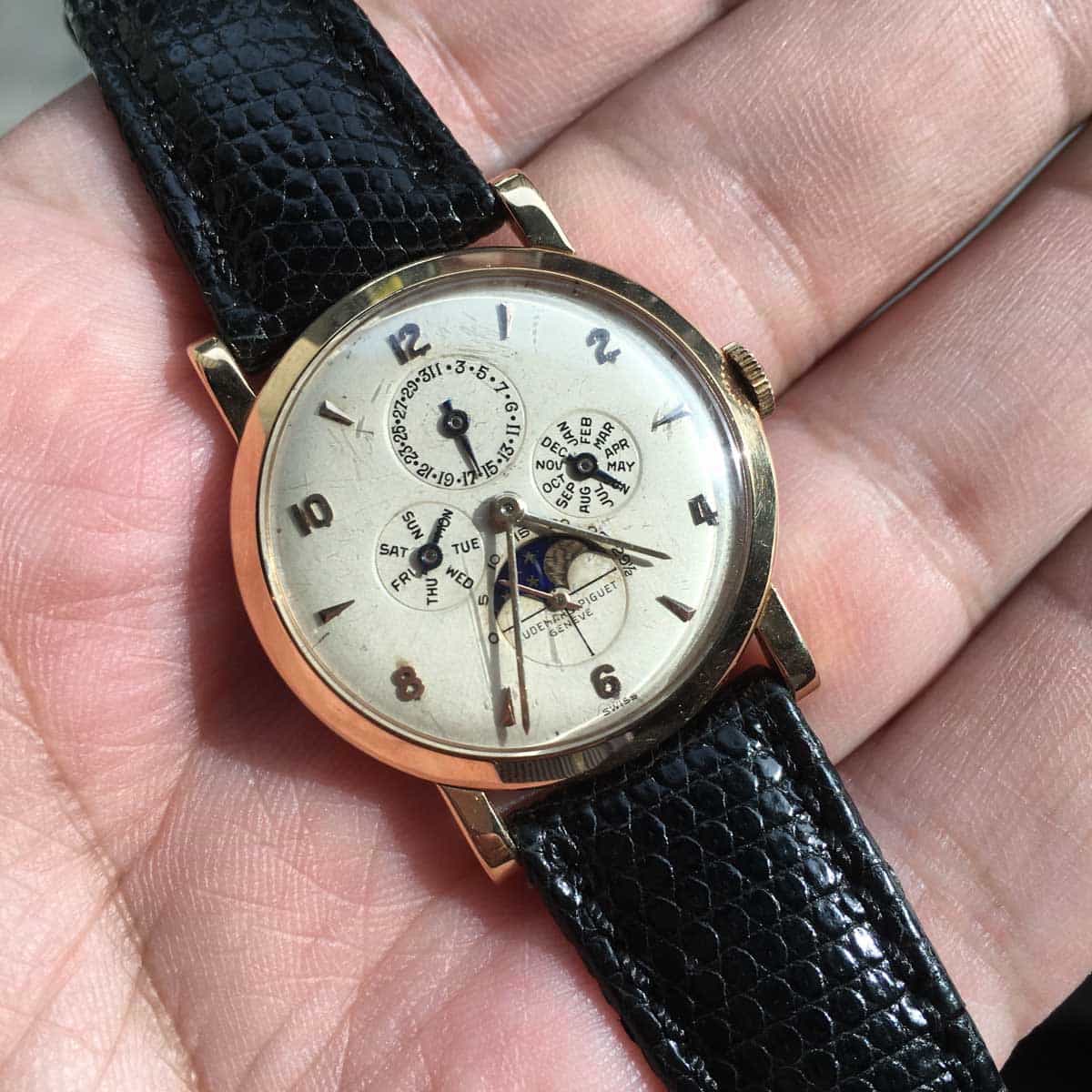 Audemars Piguet vintage watches have been shining at auction and in the vintage market in great part due to their amazingly well kept archives and their passionate in-house historian, Michael Friedman. Although this particular triple date is small at 31mm, it is of only 3pcs made in pink gold out of the 19pcs produced with this reference between 1951-1967. The movements were manufactured from 1945 to 1950 and then delivered later in the finished timepieces starting in 1951. Before 1951, there were no references at AP, so one could consider almost every piece to be somewhat unique before then. This rare watch also happens to be in excellent condition. 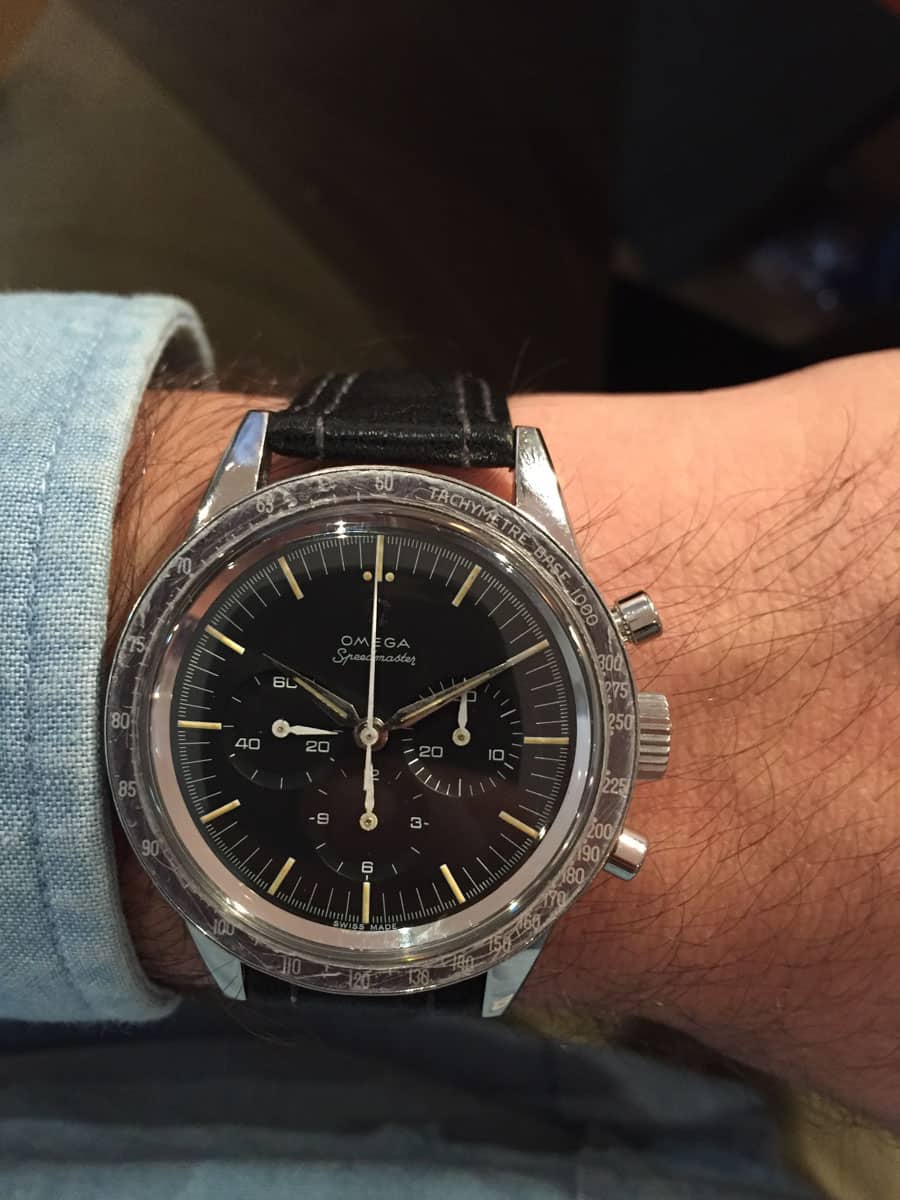 We are getting a lot of questions about this watch. No, it is not correct or is it possible to have such a late dial in a 17.3 million serial 2998-1. However, the watch looks awesome and the base 1000 bezel, case, hands and movement serial are all correct. I was pleasantly surprised that Antiquorum was so straight forward about this watch and went as far as putting this dial mismatch in the title of the lot, that I had to give them props for this watch. Also, considering what the black base 1000 tachymeter bezels are trading for these days, I would imagine someone is excited to buy this one. 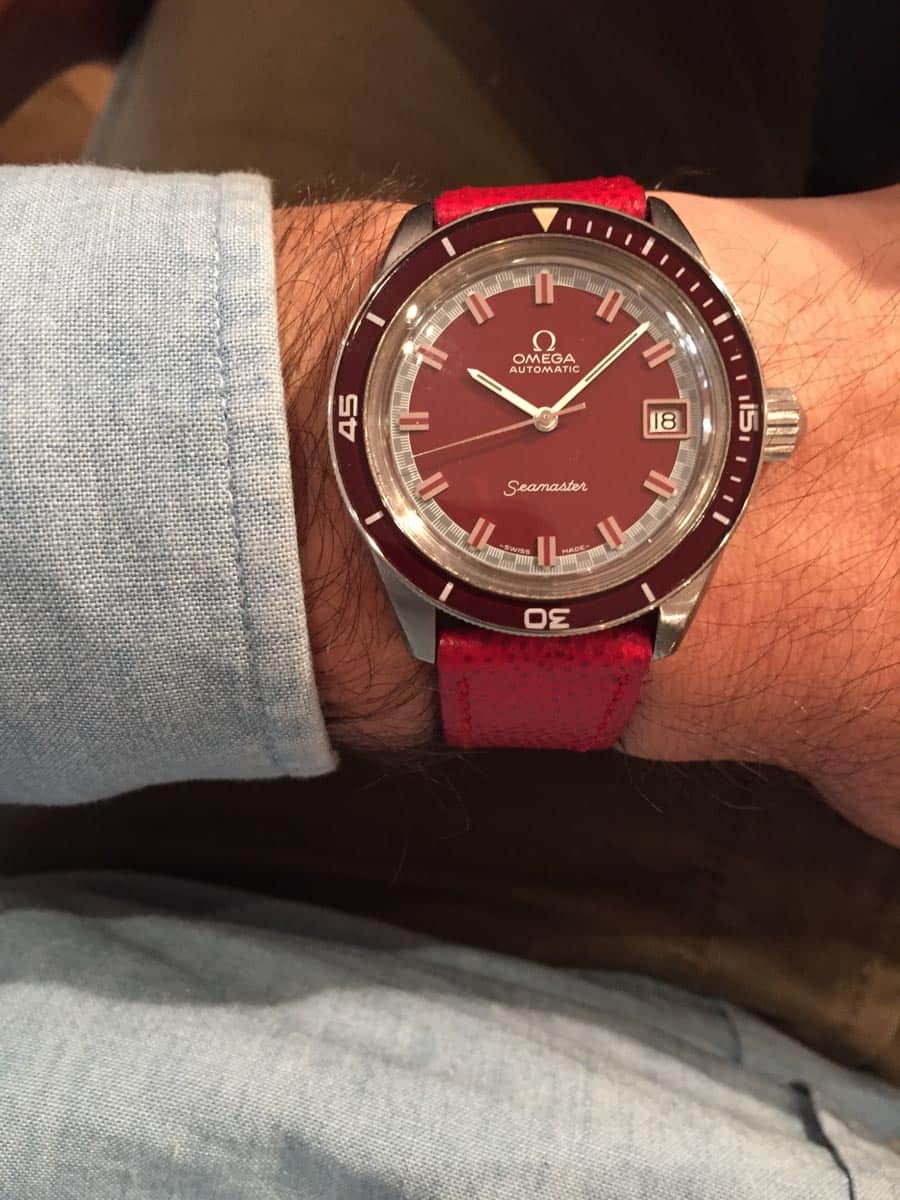 This red dial Seamaster has a ton of cool details that makes it one of our favorites. This diving watch model from the late 60’s and early 70’s has a large screw down ‘big crown’, a rotating burgundy bakelite bezel with a tritium luminous triangle, a red lacquer dial with applied hour markers and tritium lume plots as well as a racing checkerboard on the periphery of the dial. Also, the caliber 565 has a quickset date activated by pulling the crown out fully. At 37mm, you are getting a whole lot of watch at a reasonable price.

We would like to thank Sacha Davidoff for this contribution!