For years we’ve been reporting on the latest and greatest from Armin Strom here on Fratello.

The brand does not only consist of super friendly and professional watch industry experts, but they also happen to have an amazing line up of true haute horlogerie timepieces. Armin Strom is a very special brand in the sense that they only produce skeletonized watches. This is a big part of their DNA since the founder Mr. Armin Strom is an expert in these types of watches. However, their forte does not only lay in skeletonizing but designing movements that only a very few brands are doing these days. Take the Armin Strom Mirrored Force Resonance watches for example. In a nutshell; the watch has two independent movements working independently from each other but sharing “information” and synchronizing one another hence improving accuracy. 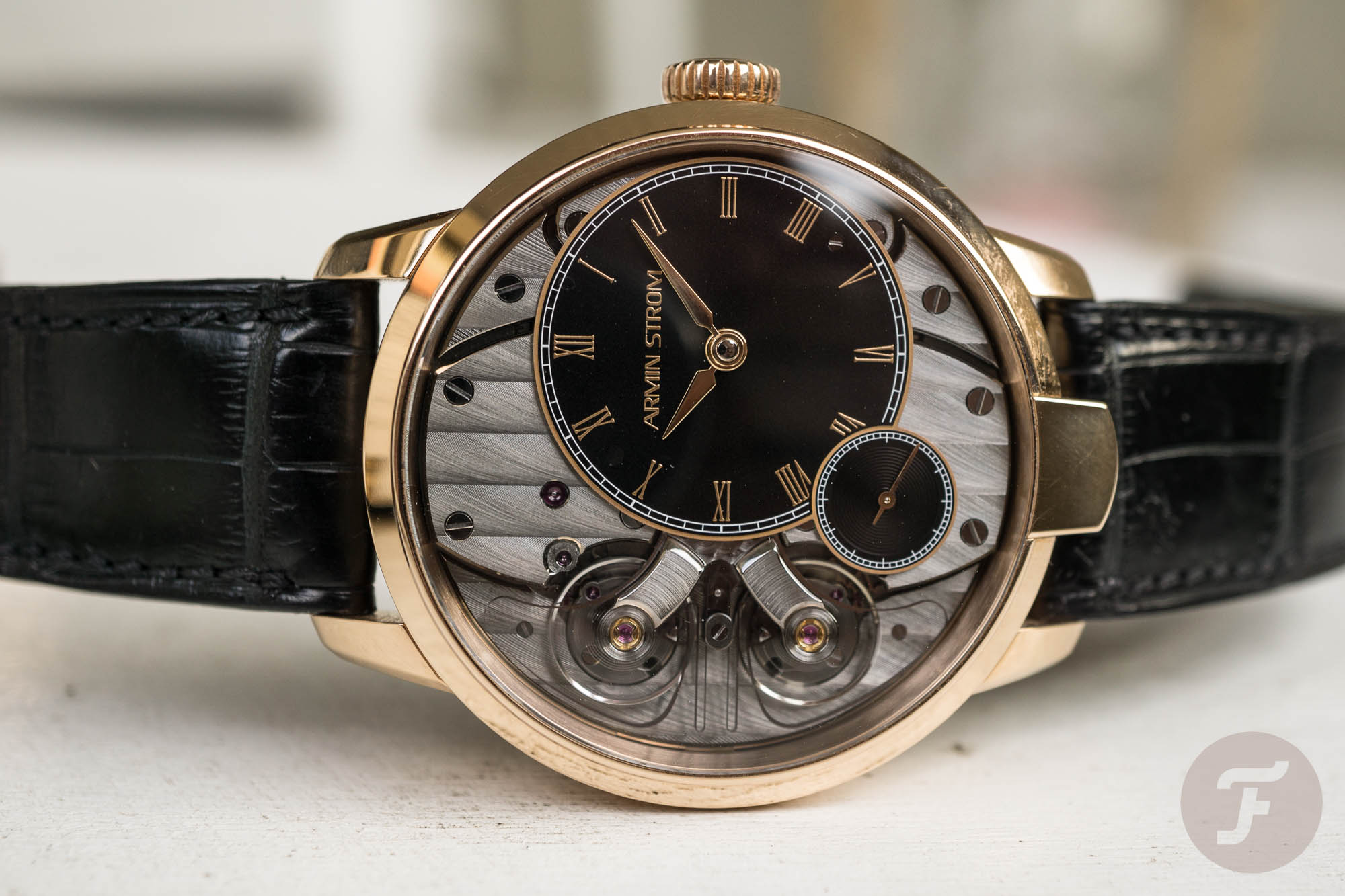 When you look at any Armin Strom Mirrored Force Resonance timepiece the first thing that probably comes to your mind is that they look pretty futuristic. Though this may be true, the system – or rather the idea behind a resonance movement – is absolutely not a modern invention. So much so, that the first patent of such a watch came from the early 1800s. Guess, who the inventor was! Exactly, it was the French/Swiss watchmaker genius Abraham-Louis Breguet. Though the idea came even earlier than Breguet. Albeit his pocket watch with resonance, the movement was way different than any modern timepiece the idea was very similar; two movements working together simultaneously, constantly “correcting” each other’s beat errors to create a watch that is as accurate as it can be. The first wristwatch to have a resonance movement is the Chronométre á Résonance from the 1990s by contemporary watchmaker F.P. Journe. 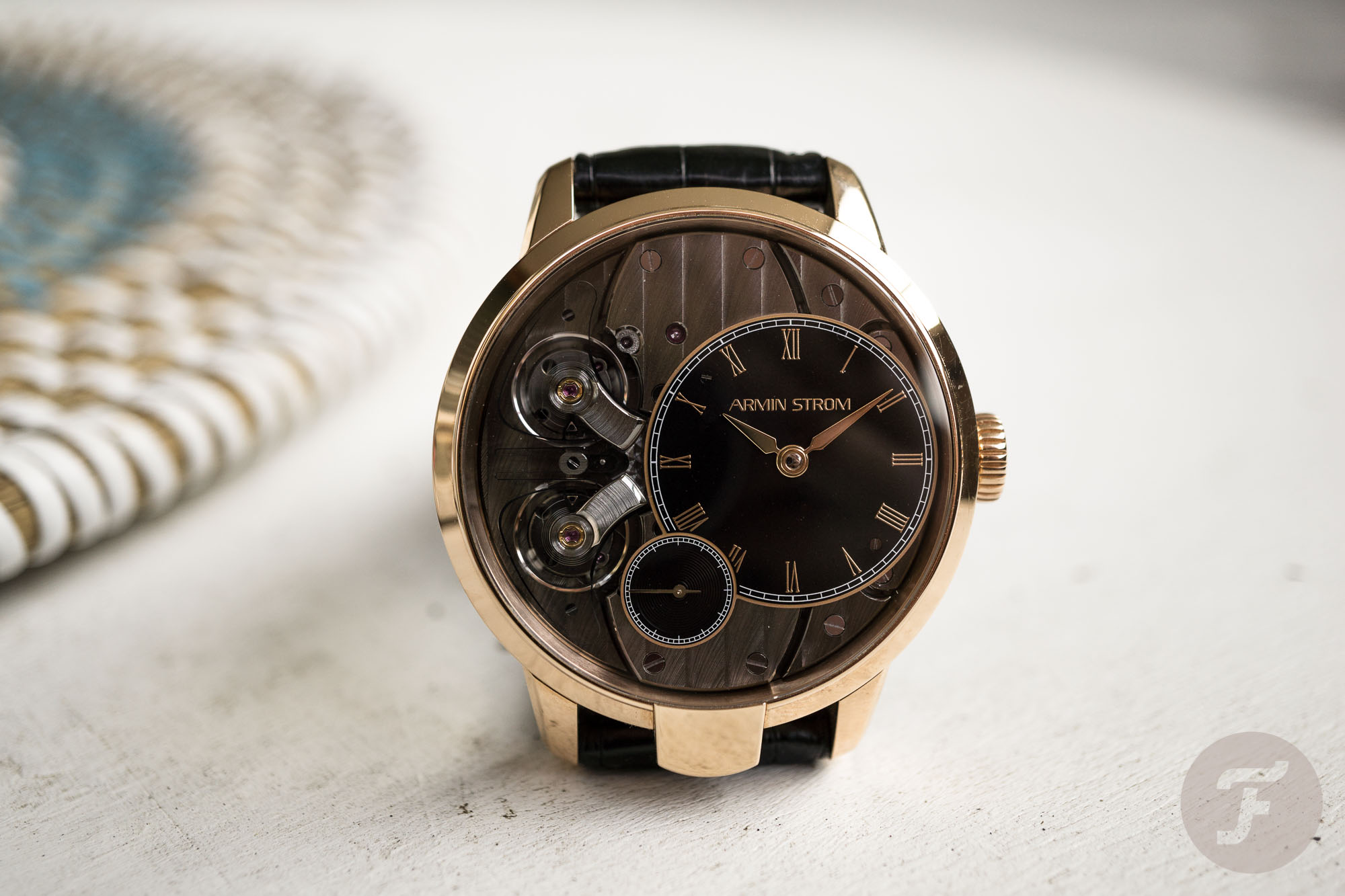 The basic idea is simple; two independent movements within the watch working closely together. These two movements need to be synchronized eventually, to get a stronger, more accurate signal. This signal is used to display a more precise and balanced time on the dial. This synchronization is the challenge where Armin Strom’s patented clutch spring system comes to play. The Armin Strom clutch spring is positioned between the two hairsprings (you can see it at the 9 o’clock) connecting and, in a way, balancing out the inaccuracies of them. This information then displayed on the dial, which is at 3 o clock. The first of such Armin Strom timepieces was the Mirrored Force Resonance watch in 2017. Here, you could see the 2 hairsprings and also two running seconds, each connected to one movement. The bottom was is running clockwise and the upper one counter-clockwise. 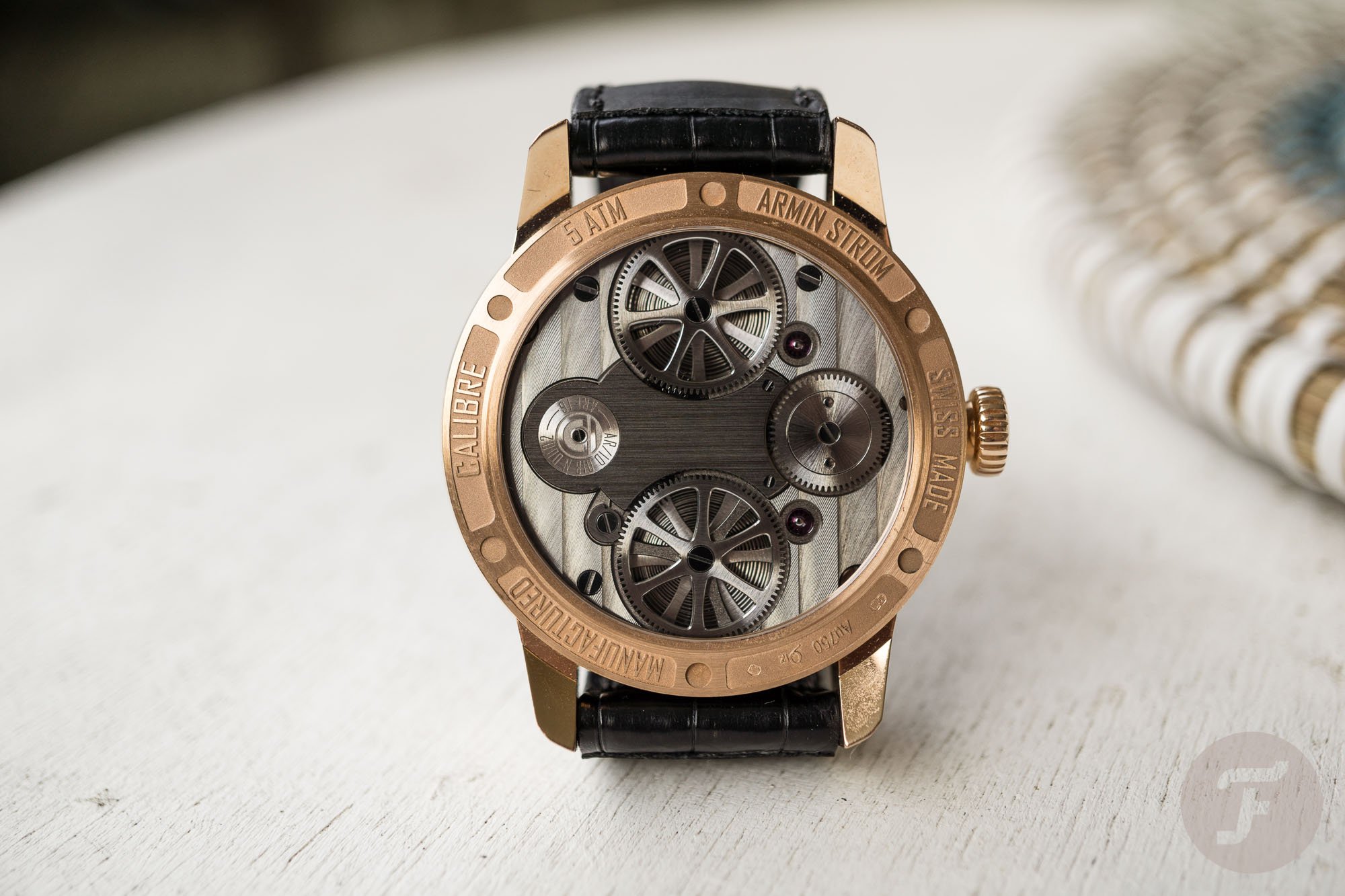 Last year during SIHH, the brand launched their second collection with such a movement, the Armin Strom Pure. In many ways, this collection is more refined and simplified then the Mirrored Force Resonance line is. To start with the watch is much smaller than its predecessor. It is only 42mm compared to the 43.5mm of the Mirrored Force Resonance. The thickness is 12mm compared to 13mm, not much of a change but still. The watch only displays one running second, which you can find between 6 and 7 o’clock. All in all, the face is albeit still skeleton much cleaner and somewhat elegant than it was before. Armin Strom offers to versions of the Pure; Fire and Water. I had the pleasure of using the Fire for a few weeks and I have to say it was an amazing experience. The watch is as comfortable as any other timepiece.

….the water resistance is only 50m. Not that you’d ever take the Pure Fire underwater. 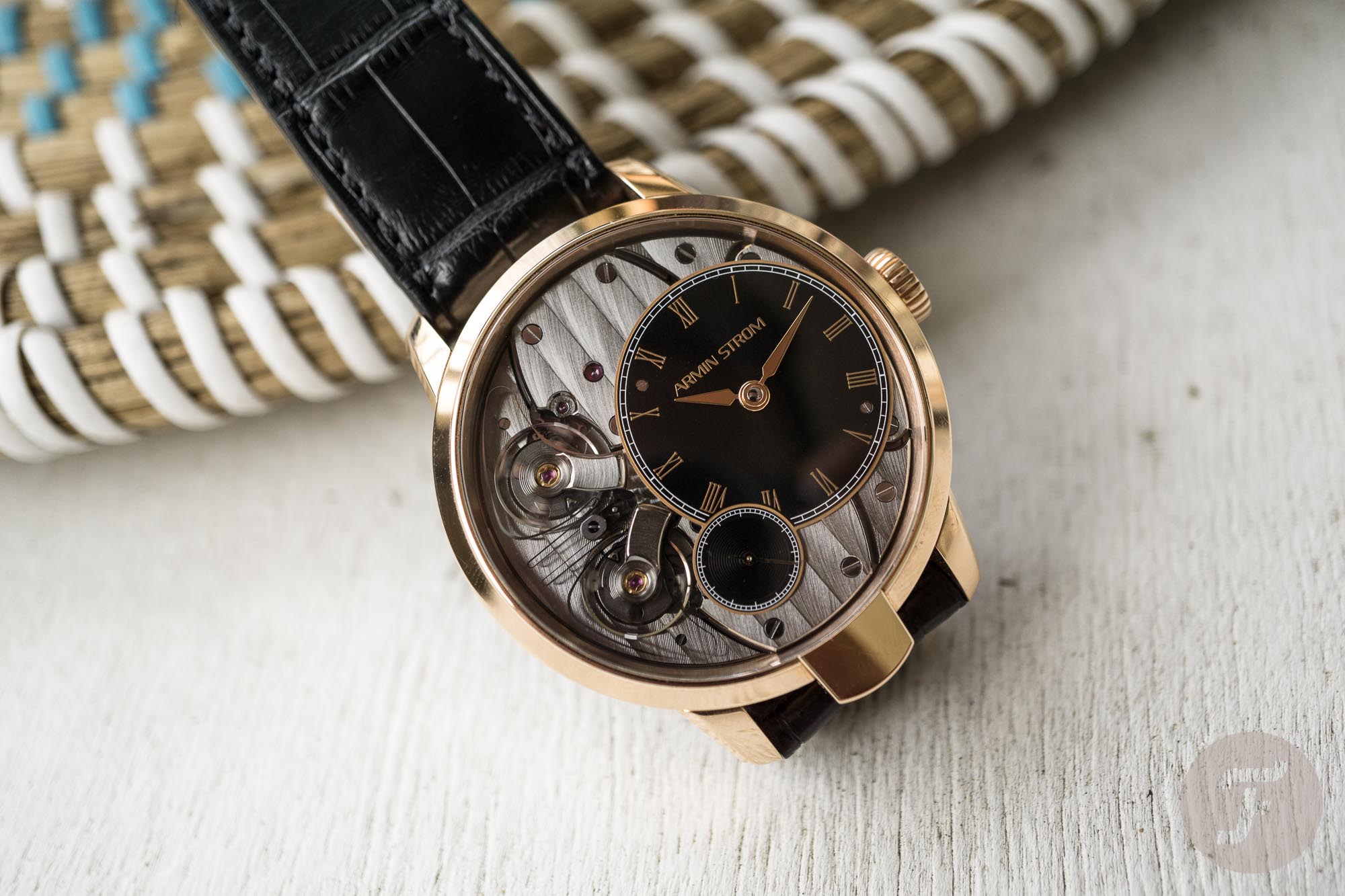 I say this despite the fact that it is Haute Horlogerie, wrapped in a big chunk of 18K rose gold. This is the more expensive version of the two since the Pure Water has a steel case. The Fire has a sapphire crystal front and back with anti-reflective coating. the back is even more minimalistic as the front with the 2 barrels (one for each movement) in view, one at 12 the other at 6. Even though the watch has a thick case the water resistance is only 50m. Not that you’d ever take the Pure Fire underwater. While the Pure Earth has a blue dial, the Pure Fire comes with a black dial with gold roman numerals. The hands are the same rose gold color as the numerals and indexes. Some people told me they think the Roman numerals don’t fit the modern look; I actually like them. 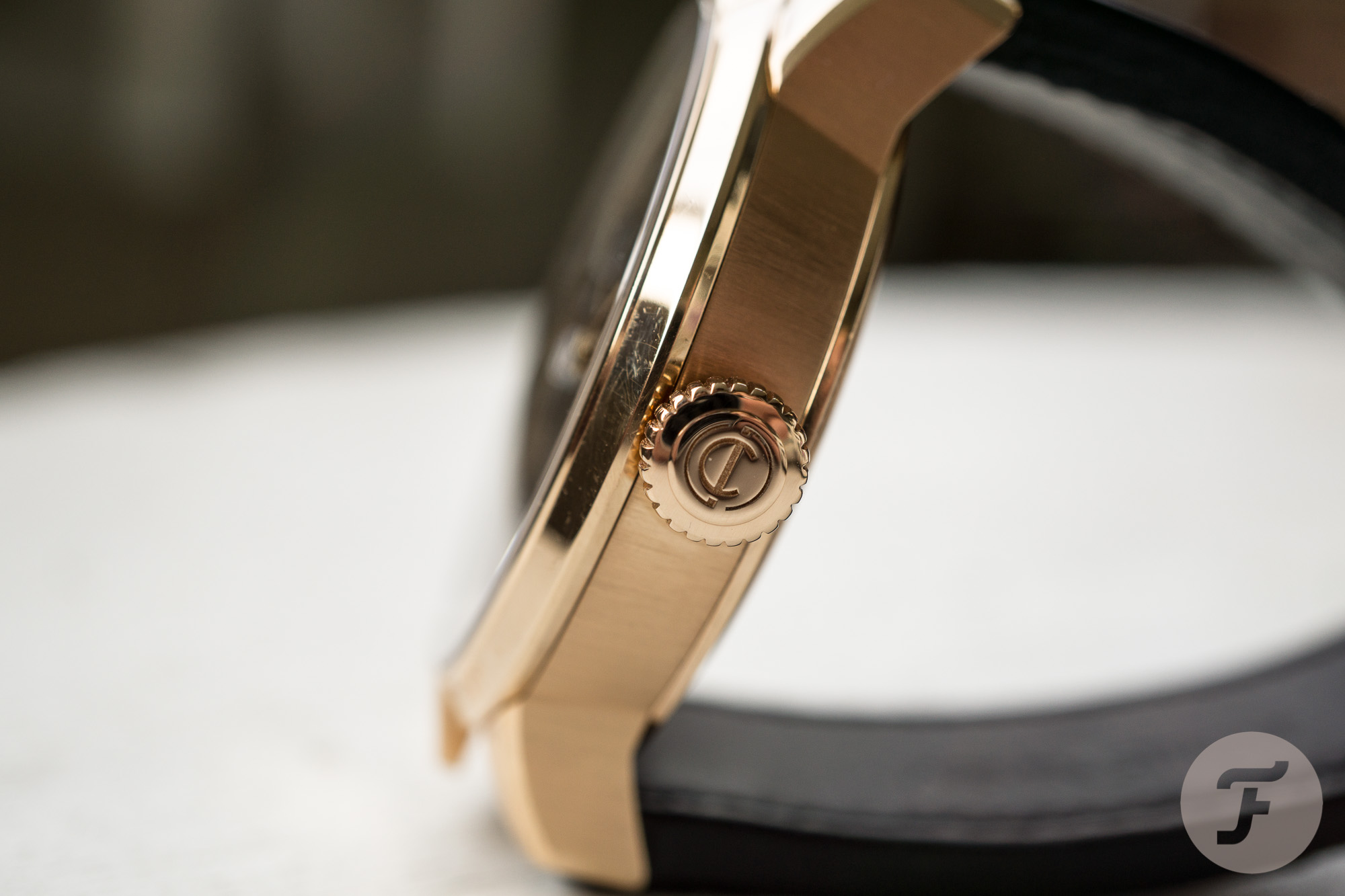 The original Armin Strom Mirrored Force Resonance’s caliber was the ARF15. The new Pure Fire’s movement is based on the ARF15 with some changes. It’s ARF16. This caliber has an hour, minute and small second display, no date, power reserve or AM/PM indication. It’s a manual wind watch and due to the double barrels, this process might take a bit longer than normal, yet the power reserve is “only” 48 hours. This is understandable as the movements need a lot of energy. As you’d have with most skeleton watches the plates and bridges have decoration on both front and back. The frequency of the ARF16 is at 25,200 Vph with 38 jewels and 206 individual parts inside the movement. It’s an outstanding caliber both aesthetically and technically, put in a timepiece that is a pleasure to wear. If you can afford the price tag that is. 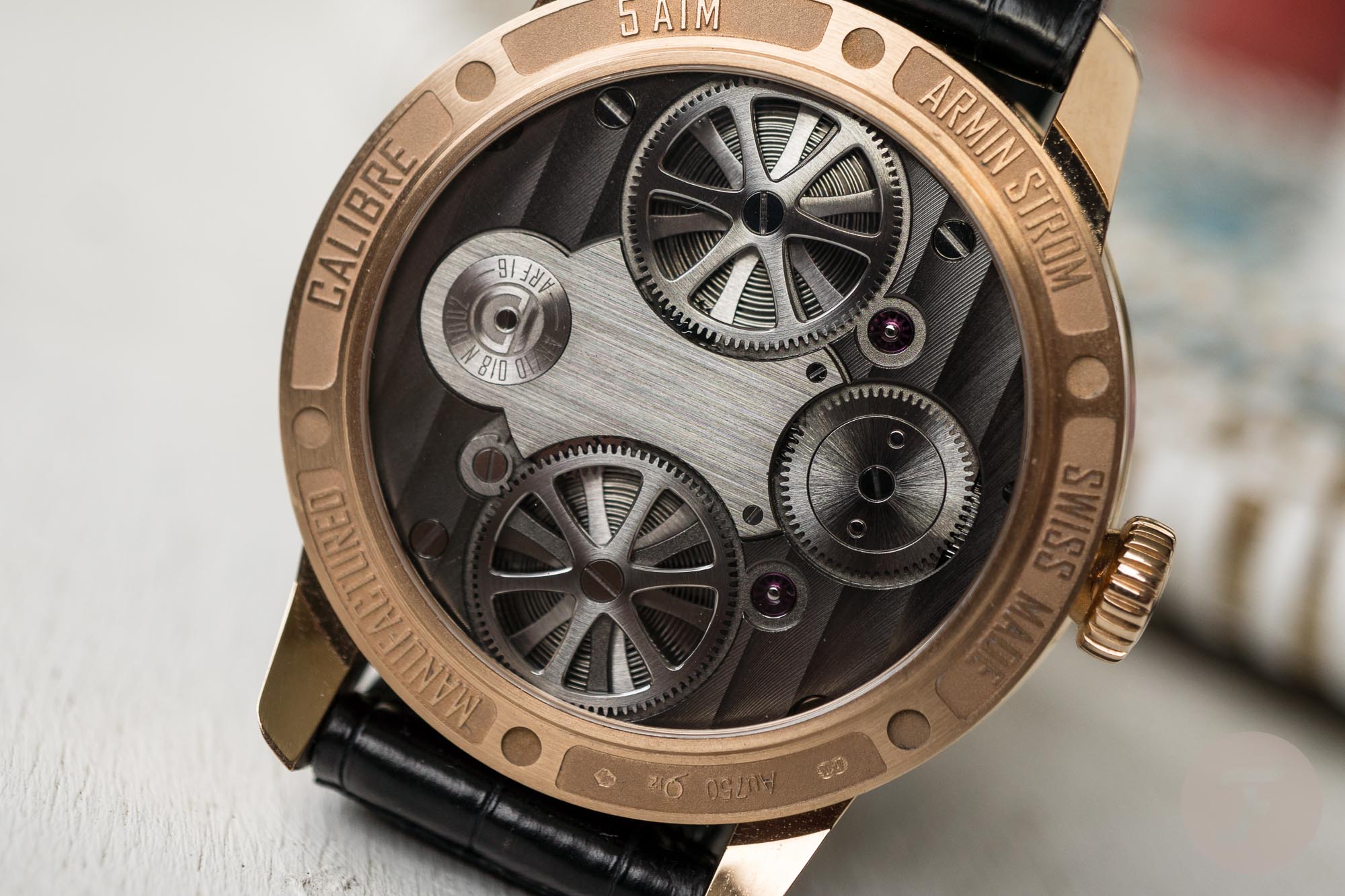 What else to say?

As far as the price goes, the Armin Strom Pure collection starts at 49,000 CHF and this refers to the steel model. As we are talking 18k rose gold if you fancy the Pure Fire that amount is significantly higher. The watch comes on a black alligator leather strap and an extra black rubber strap if you fancy a sportier look. The buckle is just a normal steel or gold pin buckles however you can get a deployant if you’re looking for added security or want to preserve your strap. while the Pure collection might seem like the little brother of the Armin Strom Mirrored Force Resonance that’s not quite the case. Both models have the same basic principles, but they play in a different league look and size-wise. While I liked the Mirrored Force Resonance my favorite has the be the Pure for its size and simplicity.

If you want to read more about the brand or perhaps configure your own Armin Strom timepiece please visit their site by clicking here.