The Audemars Piguet Royal Oak Jumbo was already mentioned in last week’s 52Mondayz. One of the icons when watches with integrated bracelets are concerned. 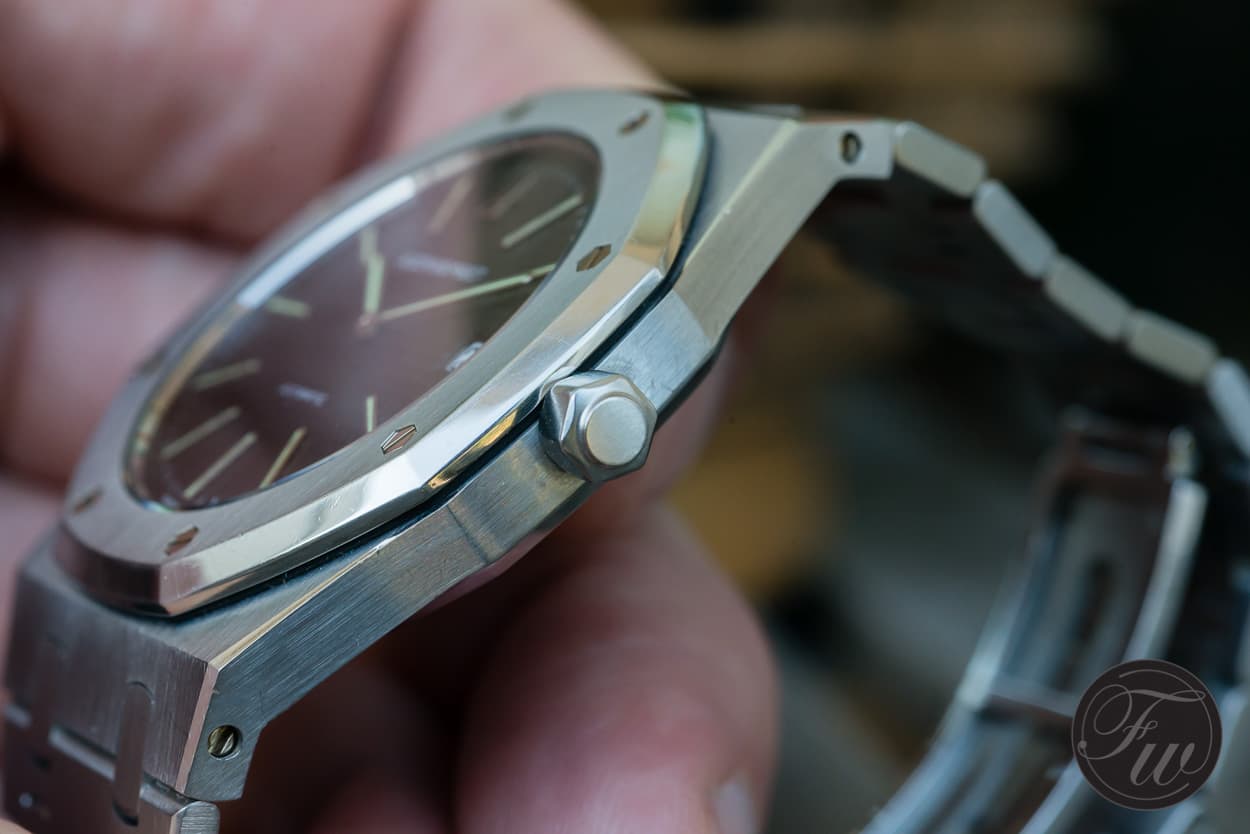 The weather has been very comfortable in our part of Europe lately, with temperatures in the high twenties. Centigrade that is. In Fahrenheit that would be around 80 degrees. Of course I try to avoid it, however with these temperatures some transpiration can occur. And at these occasions a metal bracelet is preferable compared to a leather strap. 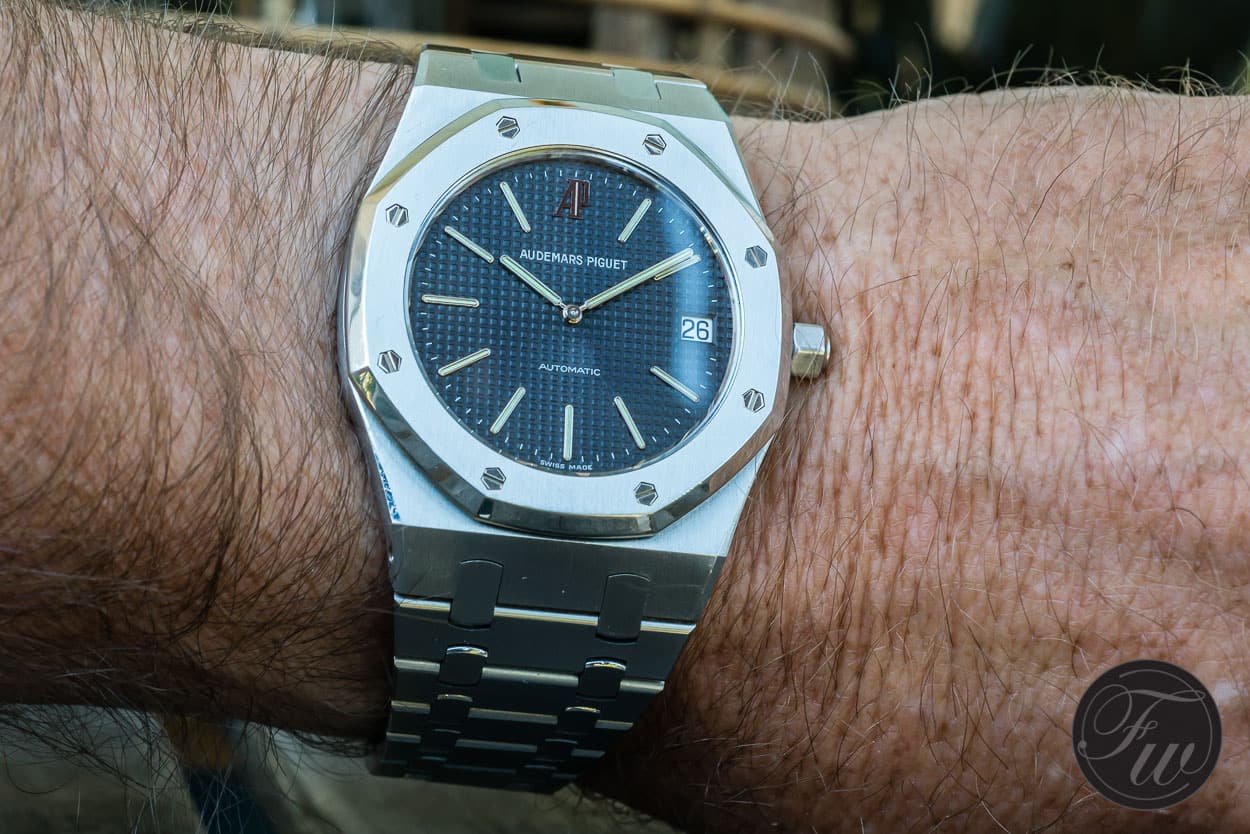 The Audemars Piguet Royal Oak Jumbo where it should be, on my wrist

So for this week as well I looked for a watch with a stainless steel bracelet, just to be sure. To follow my preference for watches with integrated bracelets, this time I opted for the Audemars Piguet Royal Oak Jumbo.

The Audemars Piguet Royal Oak Jumbo I’m wearing this week bears the reference 14802ST. A so called Jubilee model, which was presented in 1992 for the Royal Oak Jumbo’s 20th anniversary. In total 1000 pieces of this model have been made. It’s said that 300 of them were in yellow gold and 700 in stainless steel, the original material Gerald Genta had designed it in. 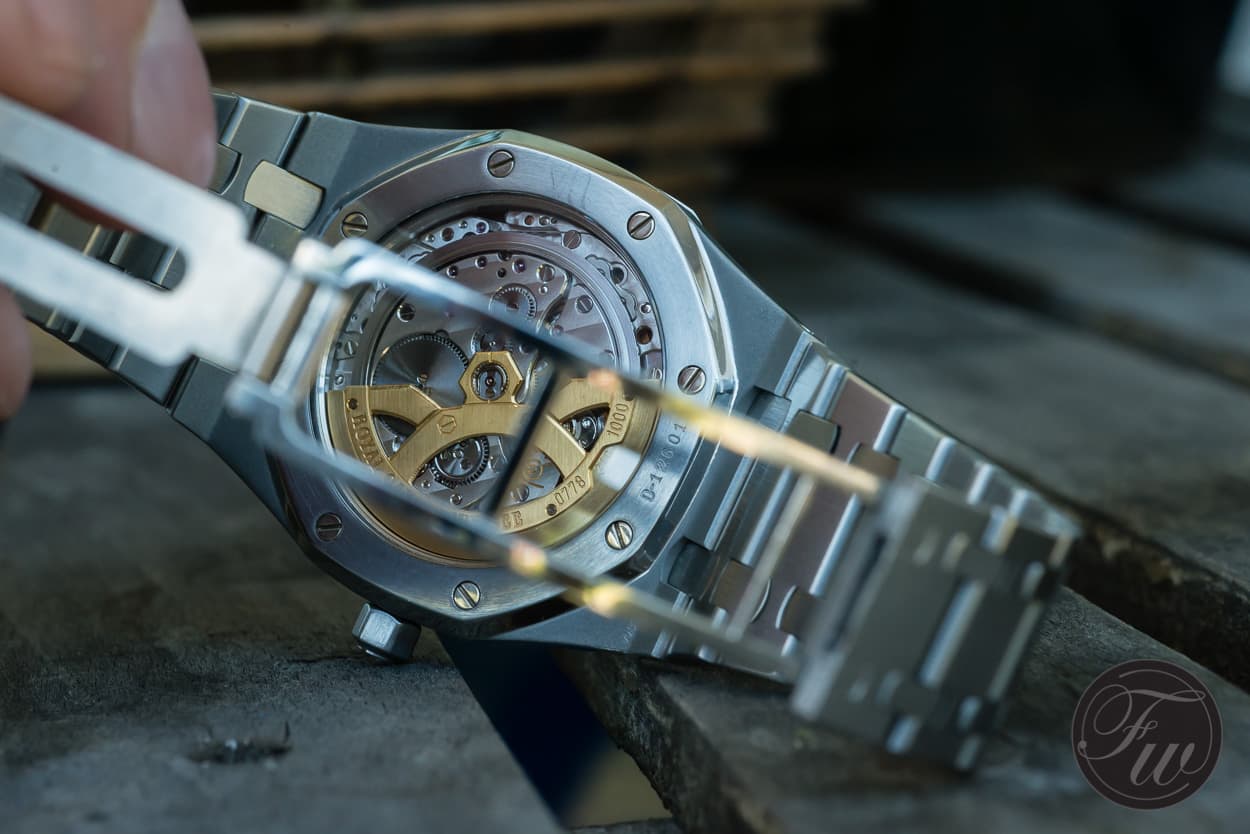 A see through sapphire glass case back was the main difference to the until that time regular Royal Oak Jumbo with reference 5402ST. Different dial lay-out and colours were other differences, as well as the use of an engraved and skeletonized 21c gold rotor. 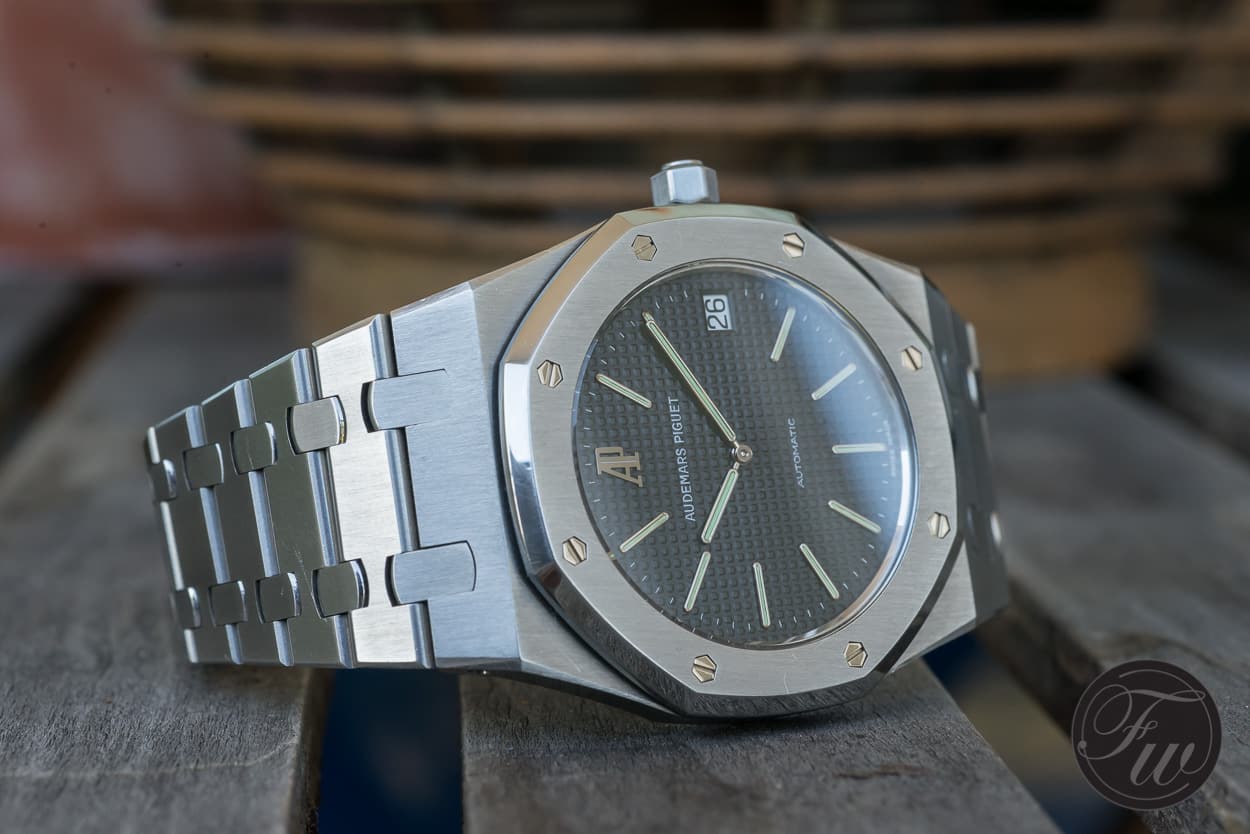 The 15002ST was produced from 1995 onwards, thus almost at the same time as the 14802ST (from 1992). They were pretty much the same watches as well, except for the glass back. As it has no transparent case back I’m not sure about the rotor which was used in the 15002ST, never have seen one opened. 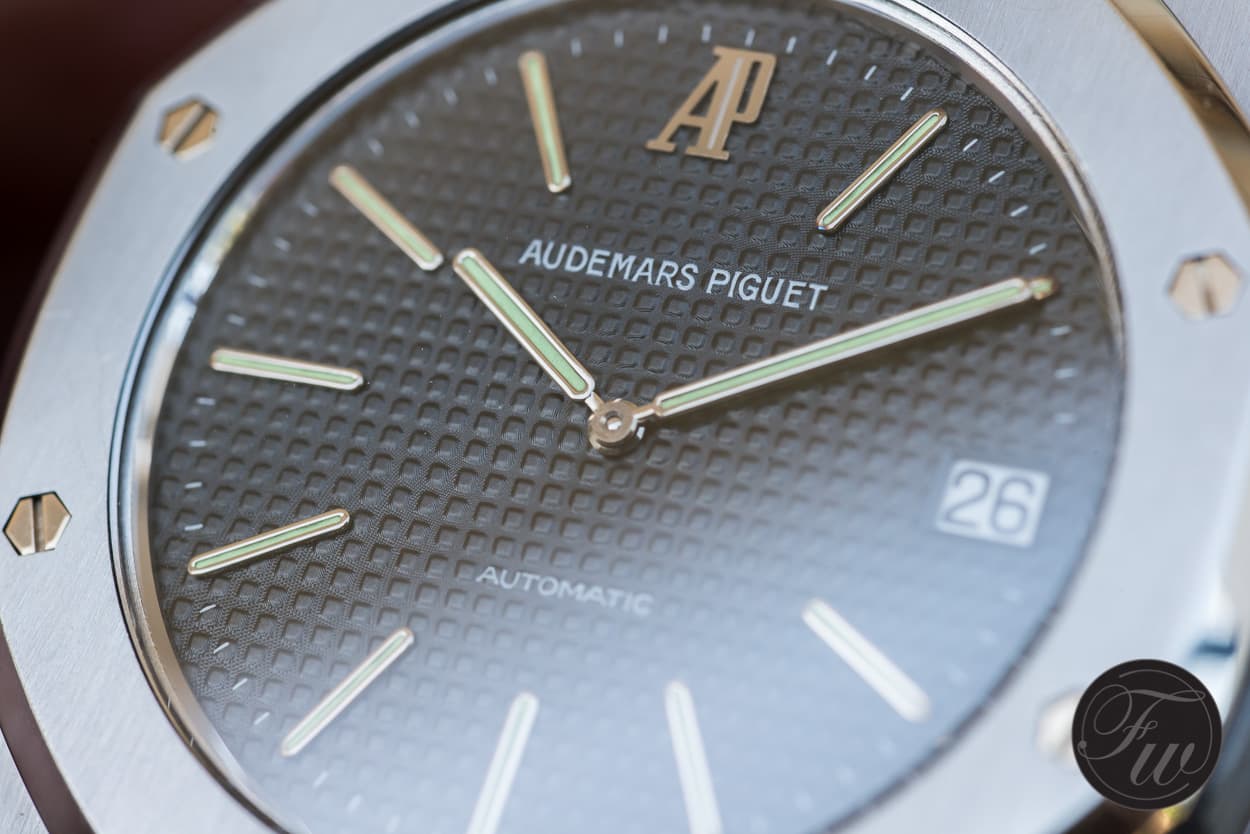 To me personally the 14802 is one of the most desirable models. The dial lay out differs slightly from the original dial in the 5402, however it still has the fine ‘Clous de Paris’ structure. As well the baton index markers and hands are thin as the original. Further there’s no minute track around the dial indicating 5, 10, 15, etc, which shortens the index markers. 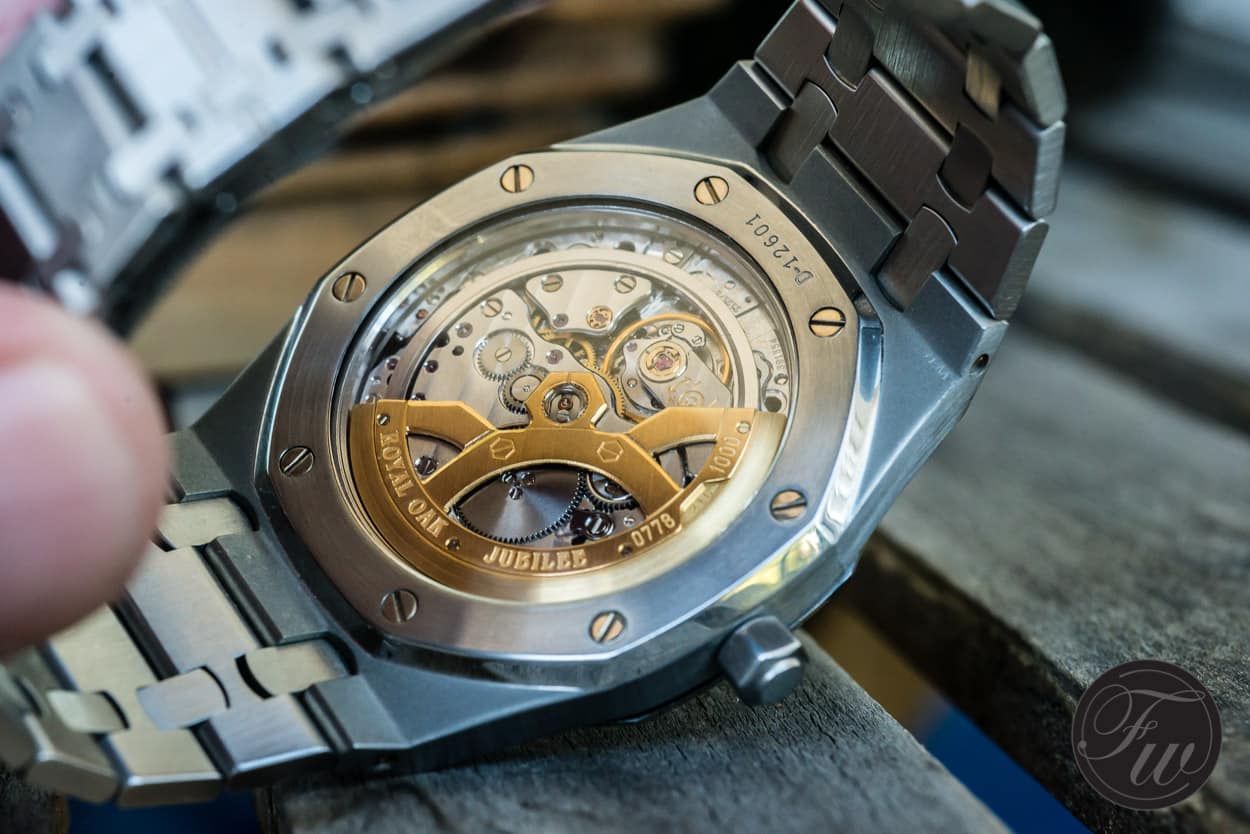 The special 21 carat gold rotor for the Jubilee model

In addition to the above mentioned interesting details of the 14802 there is the advantage of a glass back, showing the immaculate 2121 calibre. The AP calibre 2121 movement is based on Jaeger-LeCoultre’s calibre 920. Interestingly JLC never used this movement in any of their own watches. On the other hand it’s the only movement that was used by all the ‘big three’ watch brands, Patek Philippe, Vacheron Constantin and Audemars Piguet. It features 36 jewels and a free-sprung Gyromax balance. Four ruby wheels support the rotor, which runs on a beryllium rail for stability. 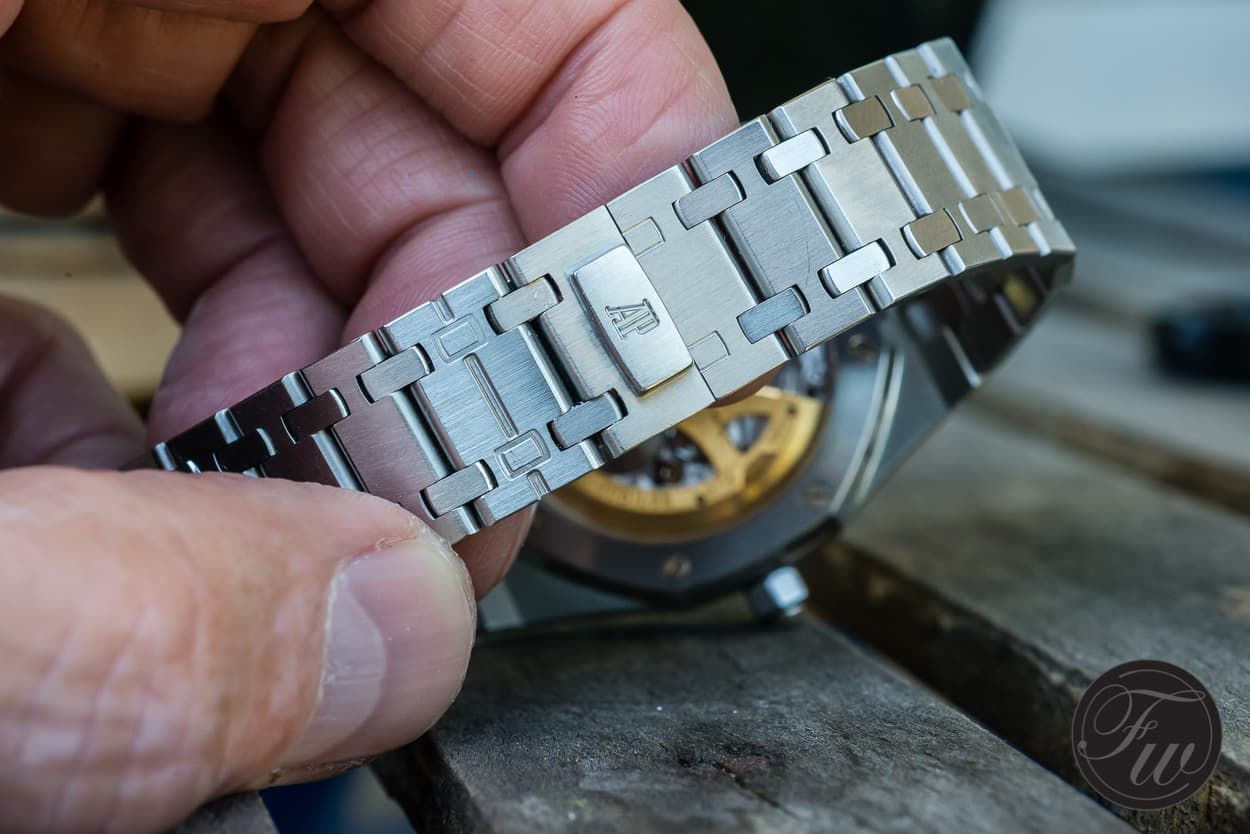 The last thing I want to praise the Audemars Piguet Royal Oak Jumbo for is its integrated bracelet. A piece of art and comfort. Almost all links from the casing to the clasp differ in width, giving it a very smooth and elegant appearance. Even the small interlink parts are getting smaller towards the end of the bracelet at the clasp. The one-sided clasp opens and closes adequately with a small AP embossed slide, never in need of much force. 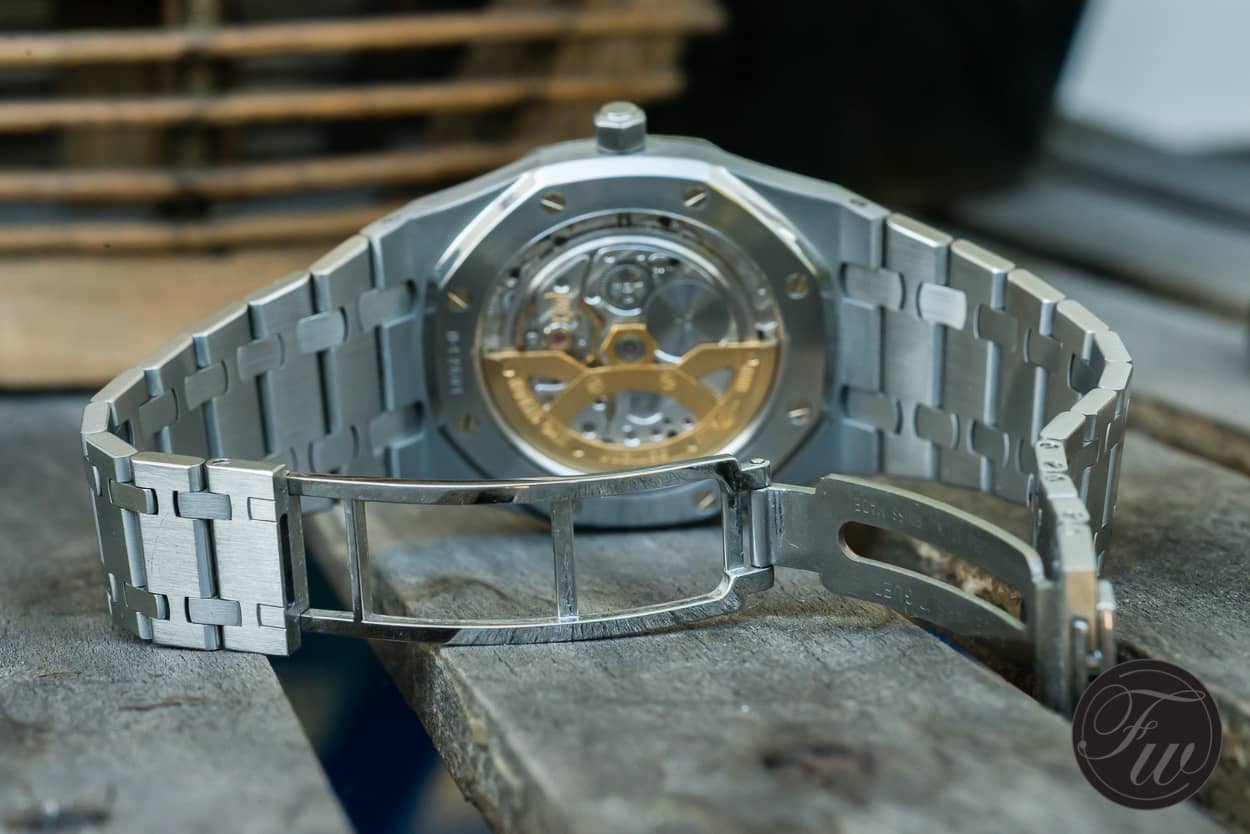 Probably a slight disadvantage of every reference of the Audemars Piguet Royal Oak Jumbo is its price. Nowadays the price for a new 15202ST is quite a bit over € 20.000,=. And you have to be careful when buying a pre-owned one below € 20k, they’re not all of the same quality or complete with original box and certificates in that case. A perfect example of a 5402 can even fetch double that price.

Hot Topics
Introducing: The New Seamaster Professional 300M 60 Years Of Bond — With A Special Animated Case Back
105 comments
Are You Still After An Omega × Swatch MoonSwatch?
84 comments
It’s Time To Invest In A Dress Watch — Our Picks From Breguet, Omega, Grand Seiko, And More
72 comments
The Rolex Waitlist Conundrum — How Much Will The Price Of Your Watch Increase While You Wait?
50 comments
The Best Omega Speedmaster Watches Of 2022
40 comments
Popular
Rolex Submariner – Historical Overview Of A Diving Legend
Robert-Jan Broer
22
The Ultimate Sports Rolex – The Explorer II Reference 1655
Robert-Jan Broer
17
Two Patek Philippe Nautilus Watches: 3700/1A Versus 5711/1A
Robert-Jan Broer
16