Well, now, this is something rare! I’ve seen a great many watch concepts in my time. I’ve seen just as many great watches. What I haven’t seen so much of, however, is a watch that pays such literal respect to the sketches that birthed it into our material world. Here, the Bvlgari Octo Finissimo Automatic 10th Anniversary (reference 103672) brings the original pencil sketches of Bvlgari’s Product Creation Executive Director Fabrizio Buonamassa Stigliani to the dial.

This is too cool. I’ve loved the Bvlgari Octo Finisissimo from afar since it was launched. And while I still maintain that the Octo Roma is a better fit for my wrist personally, I will stand on any mountaintop you like, screaming at the top of my lungs in defense of the Octo Finissimo’s status as an icon. 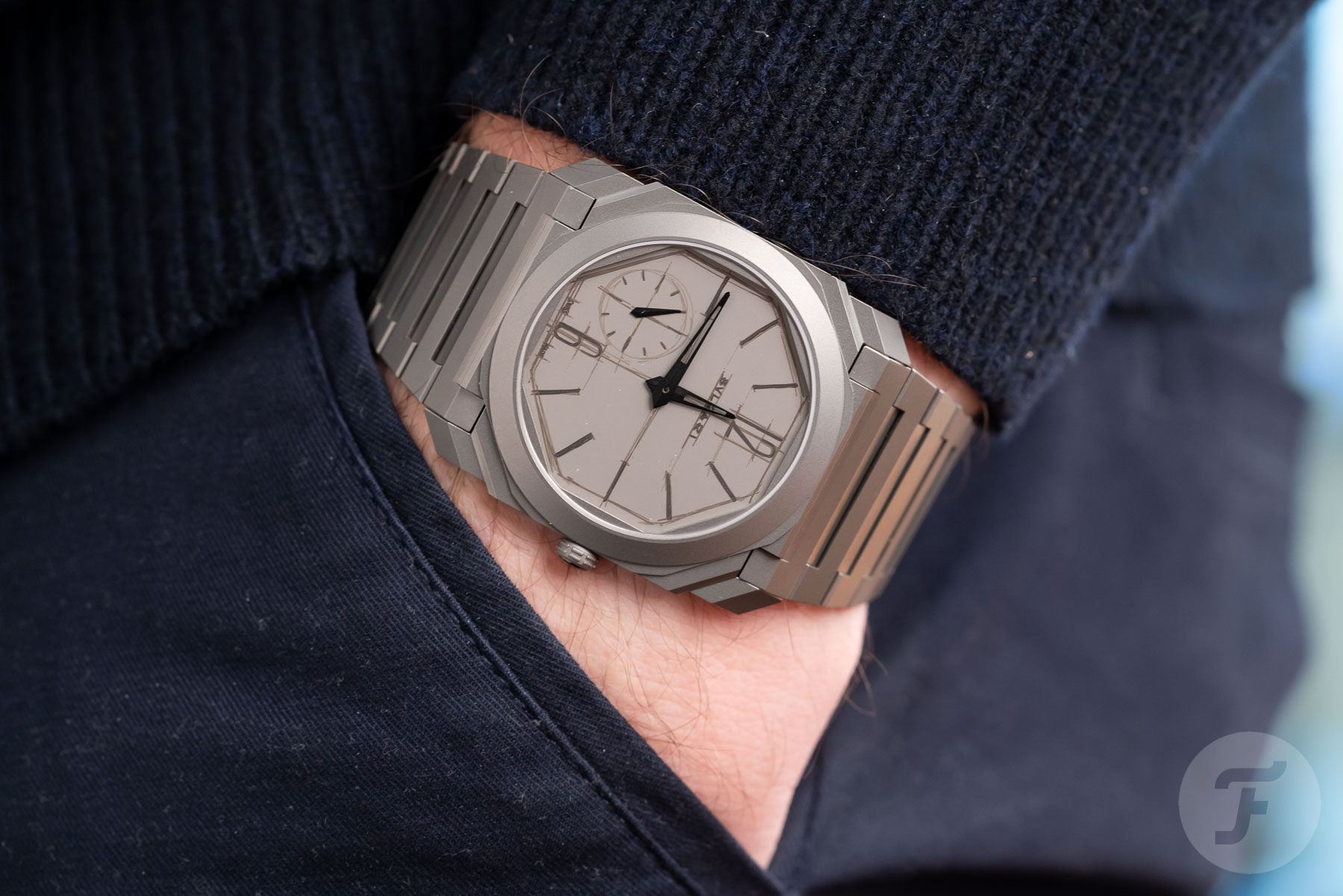 I really believe it. Yes, it is an overused word. Yes, I would choose another, less iconic watch from Bvlgari’s collection for my own wrist. And yes, it is yet another Genta-influenced design. But let’s be real: it’s special. While the tit-for-tat contest twixt Bvlgari and Piaget in the realms of ultra-thinness is academically interesting, it’s rare that anyone puts the aesthetics of a modern Piaget above those of the Octo line. Piaget has/had/will again have the records. Bvlgari has the cool factor. And, as I said before, this is simply too cool to ignore. 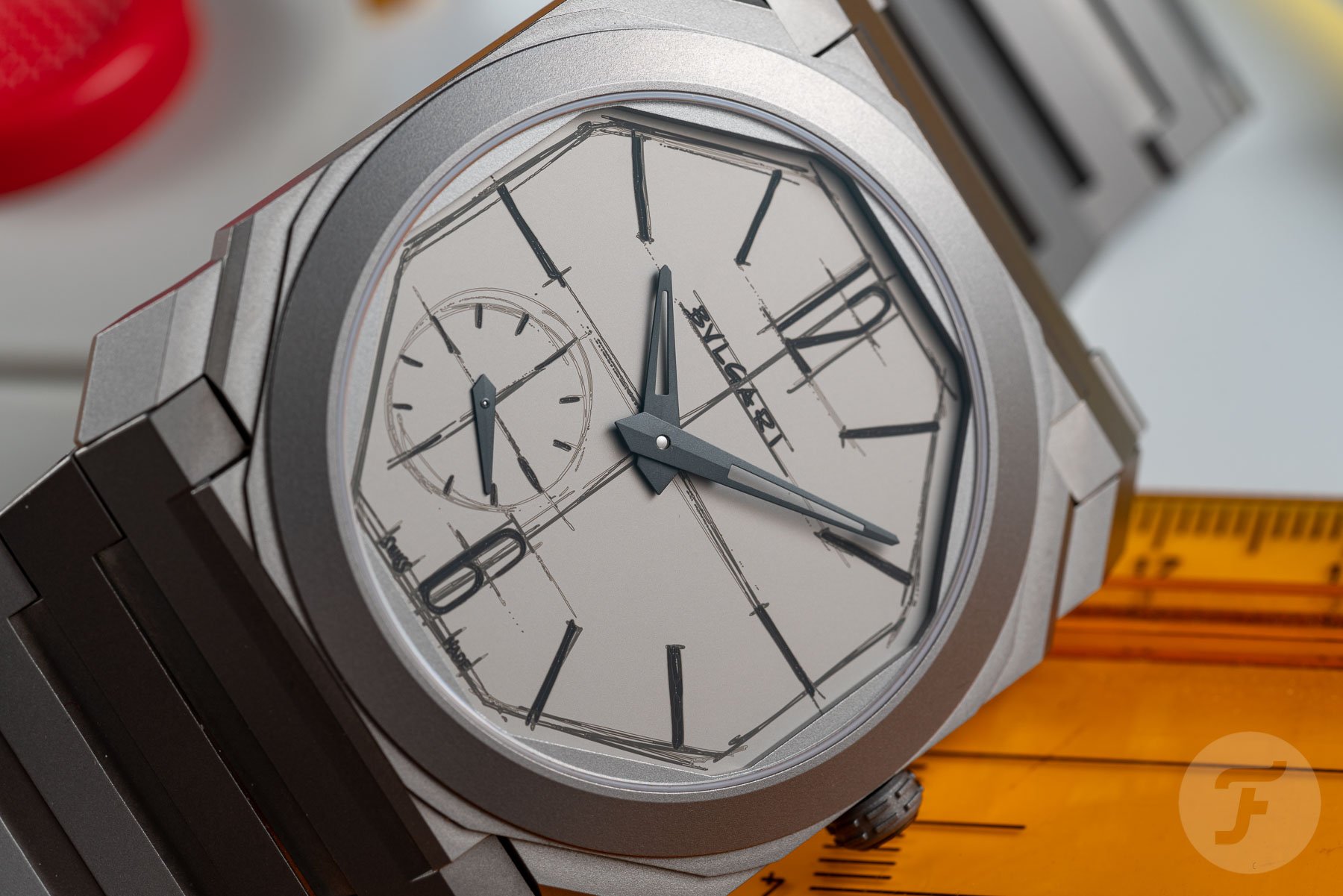 As with all relatively lofty design concepts, this watch is not for all-comers. Far from it. This is, at its core, a divisive model. It is a technical and aesthetic marvel, but its proportions don’t sit well with everyone (this fanatical writer included). I would absolutely buy a Bvlgari Octo Finissimo just to hold it, to look at it, to marvel at it, but how much actual wrist time it would get is debatable. 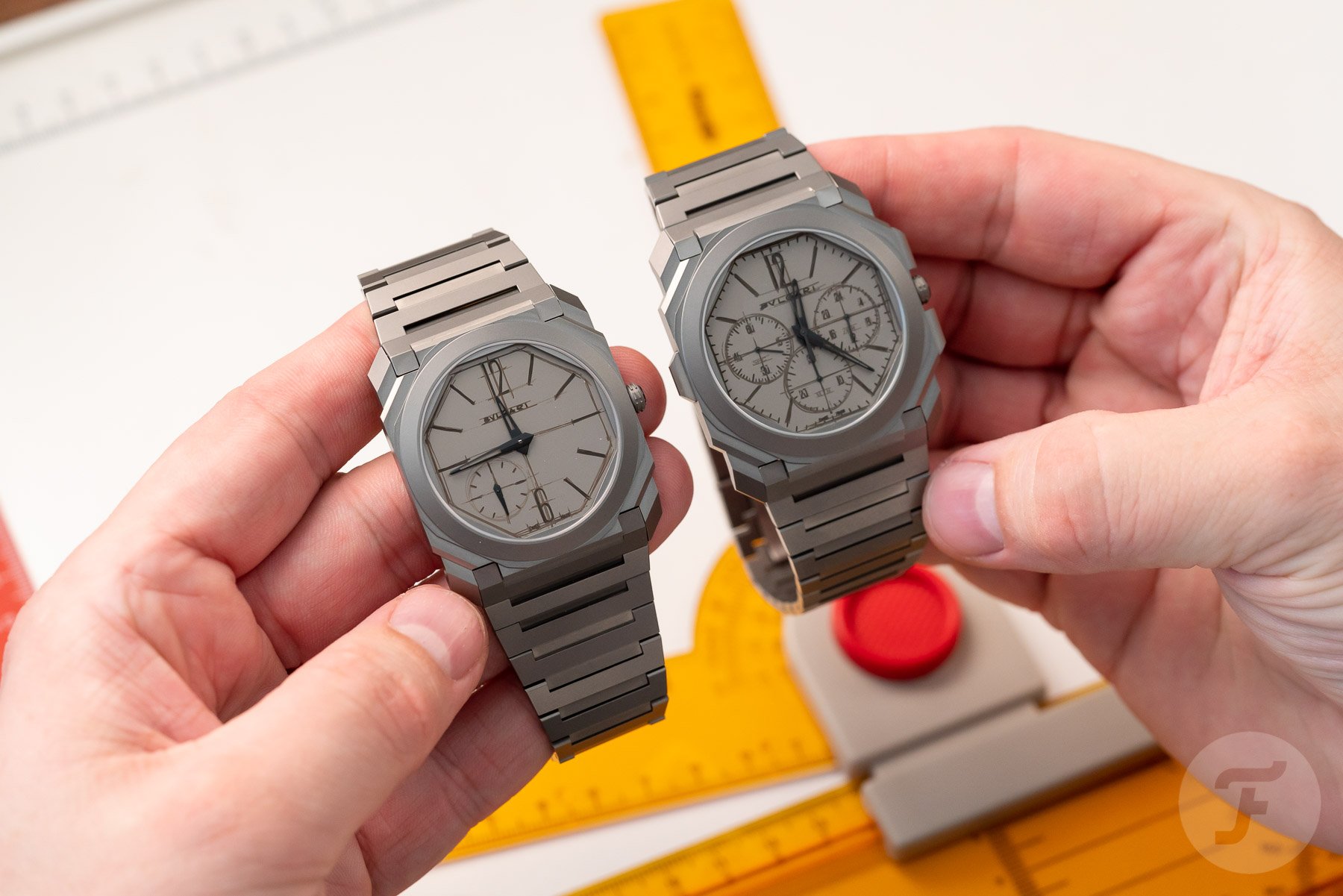 What I don’t find to be debatable, however, is how unexpectedly edgy this model is. One of the key tenets of the Bvlgari Octo lines, both Roma and Finissimo, has always been the clean lines used throughout. This is known as being a very slick family. As far as watches for modern professionals go, it’s got to be right up there. 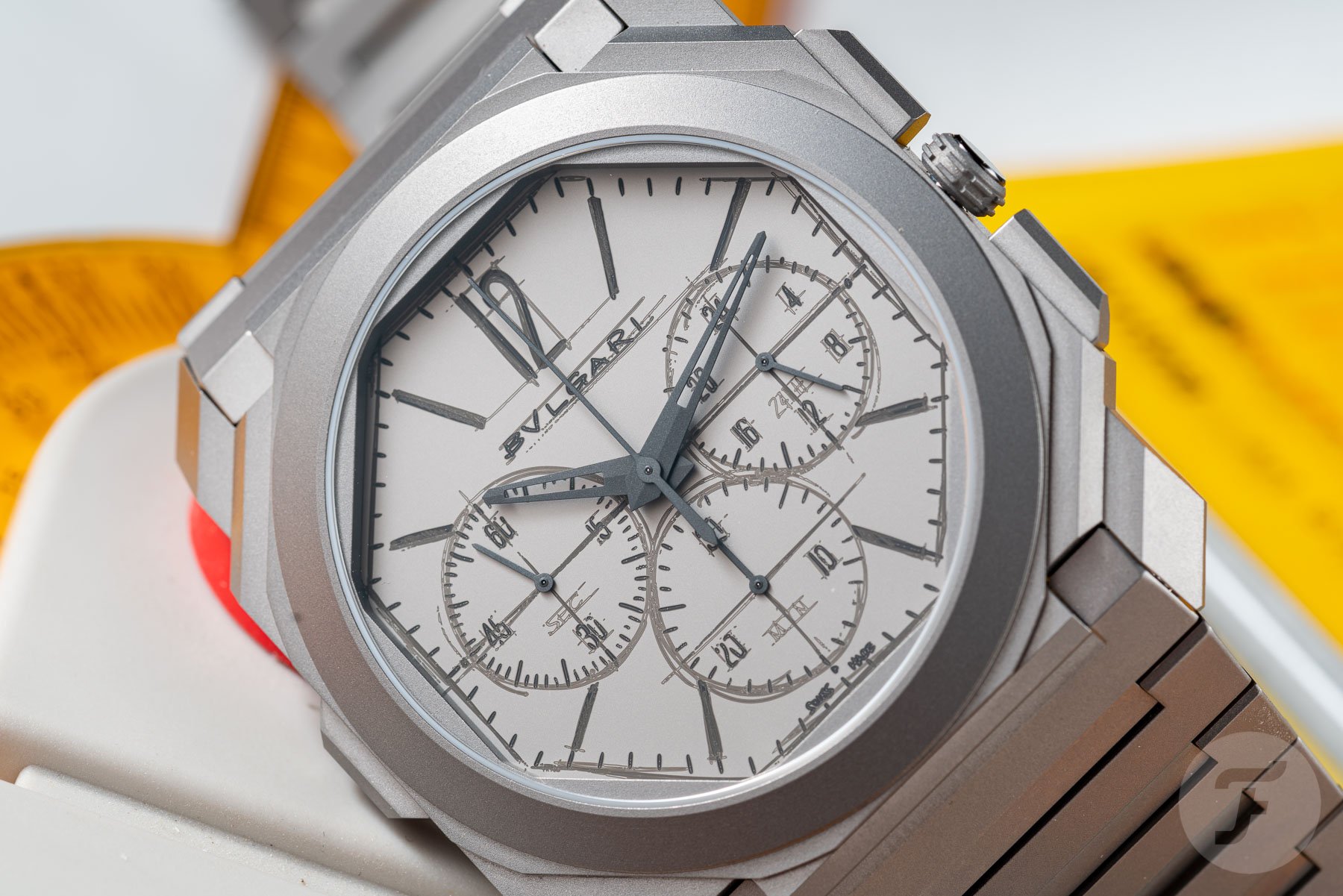 These iterations, however, are playful. They are joyful. They take the concept and honor it in a way I certainly didn’t see coming. While I find the relative cleanliness of the time-only version superior to the chronograph, it’s hard not to love the “hectic moment of inspired genius” captured by the scribbles, scratches, and lines that make up the still surprisingly functional display. 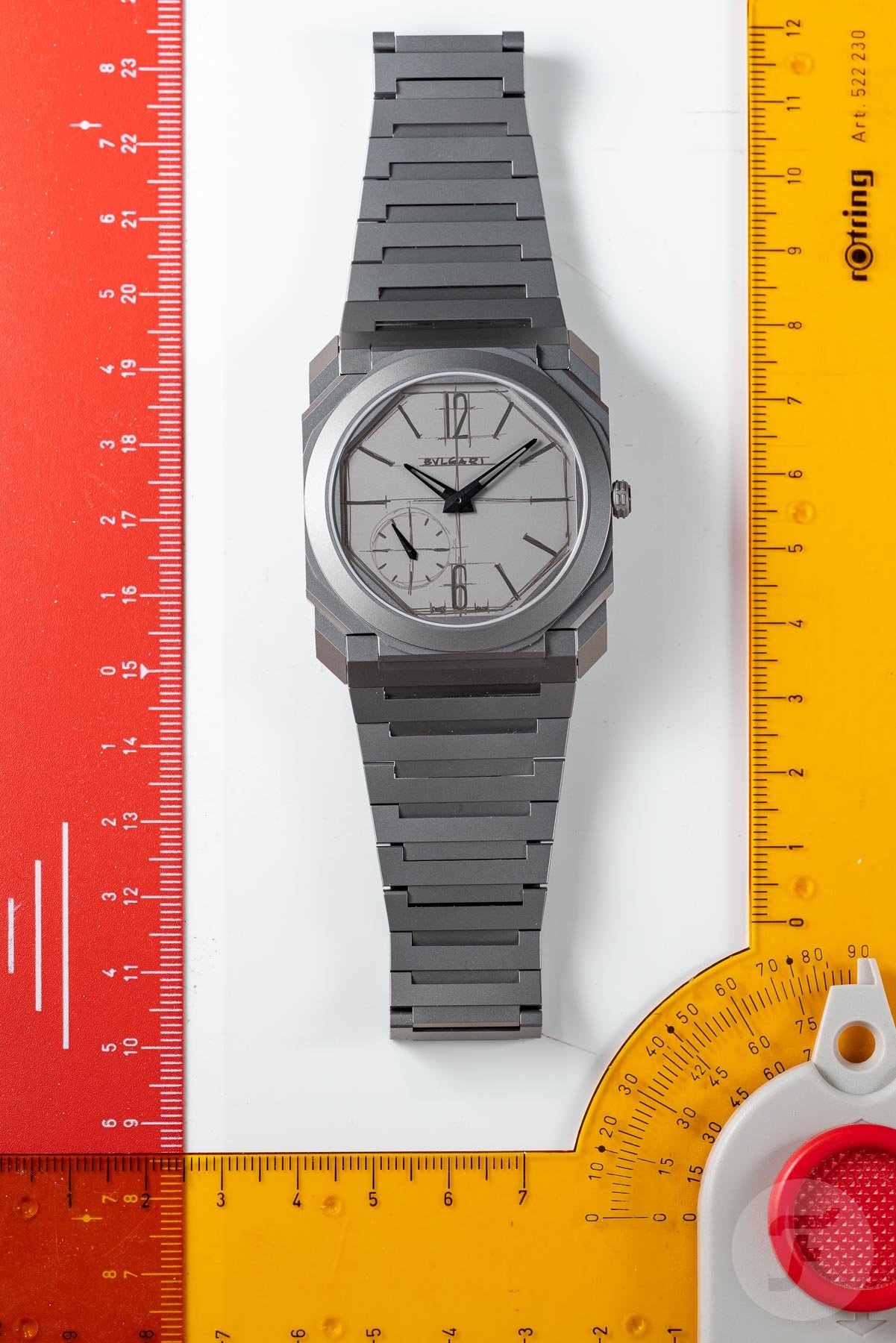 Color between the lines

I always loved the monochromatic display of the original titanium Finissimo. It was key to the modern, almost brutalist aesthetic. I am glad to see that moody palette retained here. As an object, there are few watches that can hold a candle to it, in my opinion. As you’ll probably know from these pages, I have christened the Bvlgari Octo Finissimo one of the modern Holy Trinity when it comes to luxury sports watch design. The two models that sit beside it in this heavenly trio are the Czapek Antarctique and the H. Moser & Cie. Streamliner. 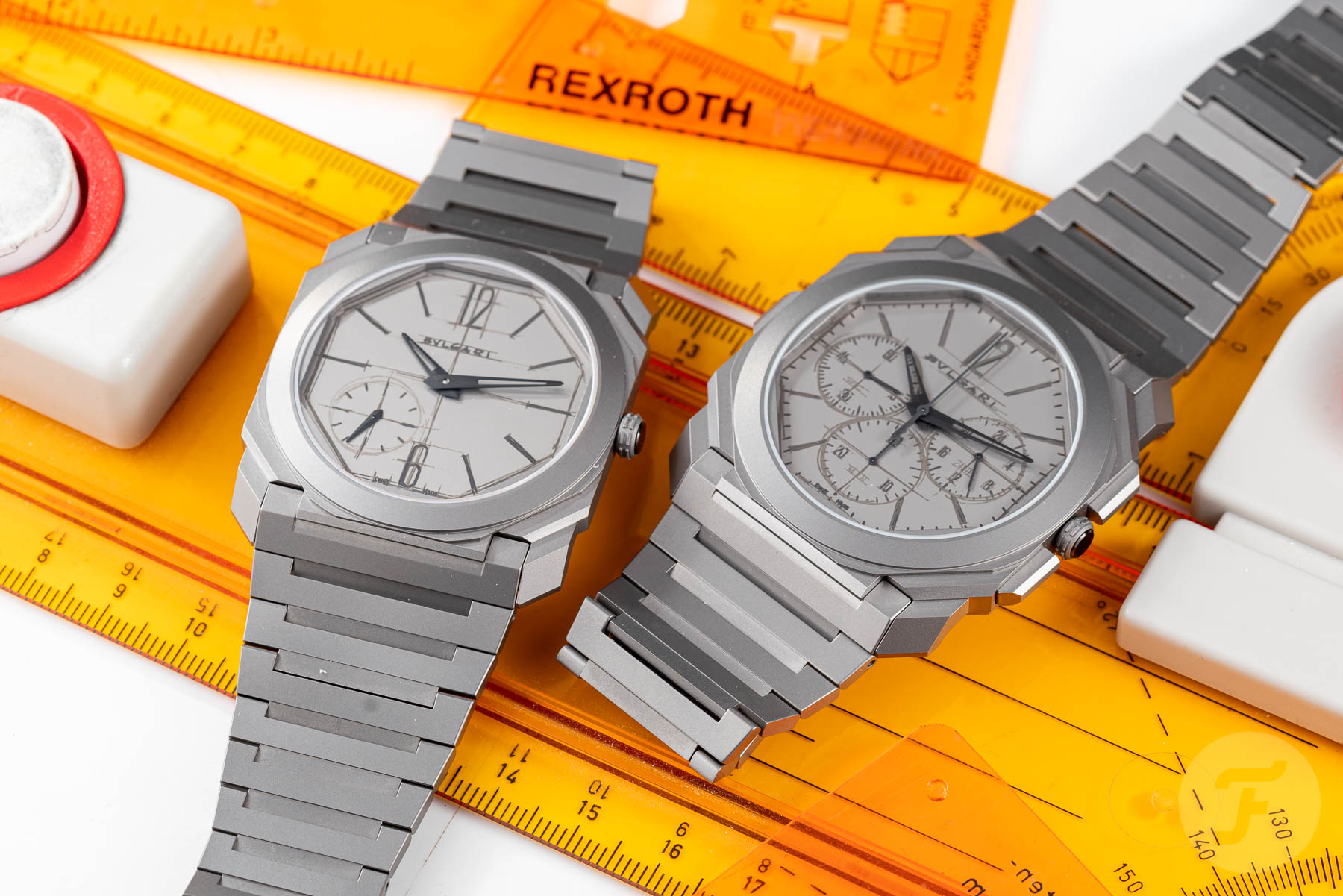 Interestingly, I felt very differently about the Bvlgari Octo Finissimo and the Moser Streamliner when I first saw them. I had assumed the Finissimo would be a dream watch that would one day enter my collection in place of the Octo Roma I’d long desired and that the Streamliner, while an architectural marvel, would not sit well on my wrist at all. Despite that, I wanted to own a Streamliner so I could complete “the set”, even if the only person in the industry that was calling that triumvirate a “set” was me… 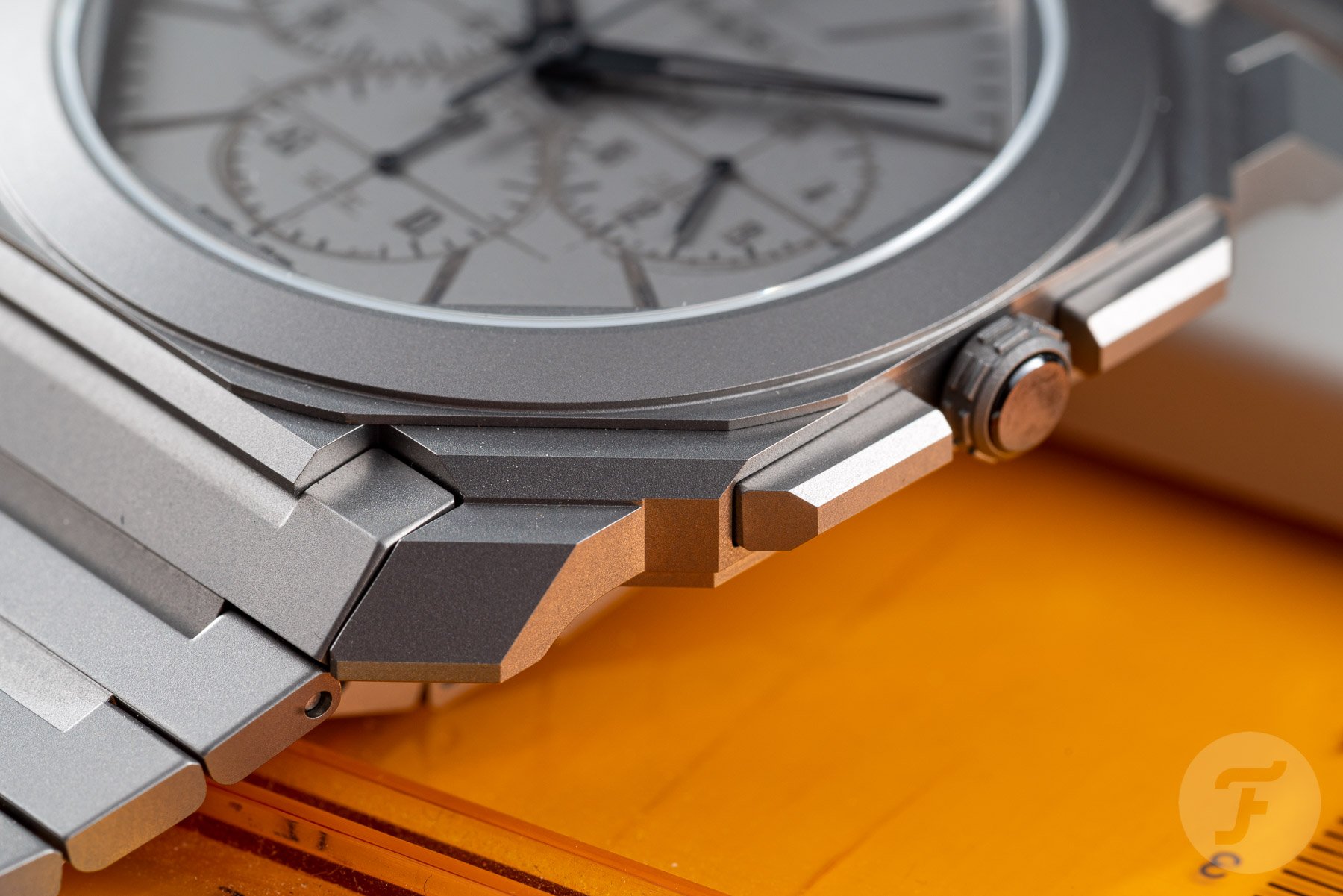 Nice to meet you… Who are you again?

And then I met them both in person and I realized two things. Firstly, the Streamliner was not as radical as I’d imagined it to be and that it sat very comfortably on my wrist — a kind of luxurious pebble that was far more grounded during wear than I had expected. Secondly, I realized just how radical the Finissimo was and still is. 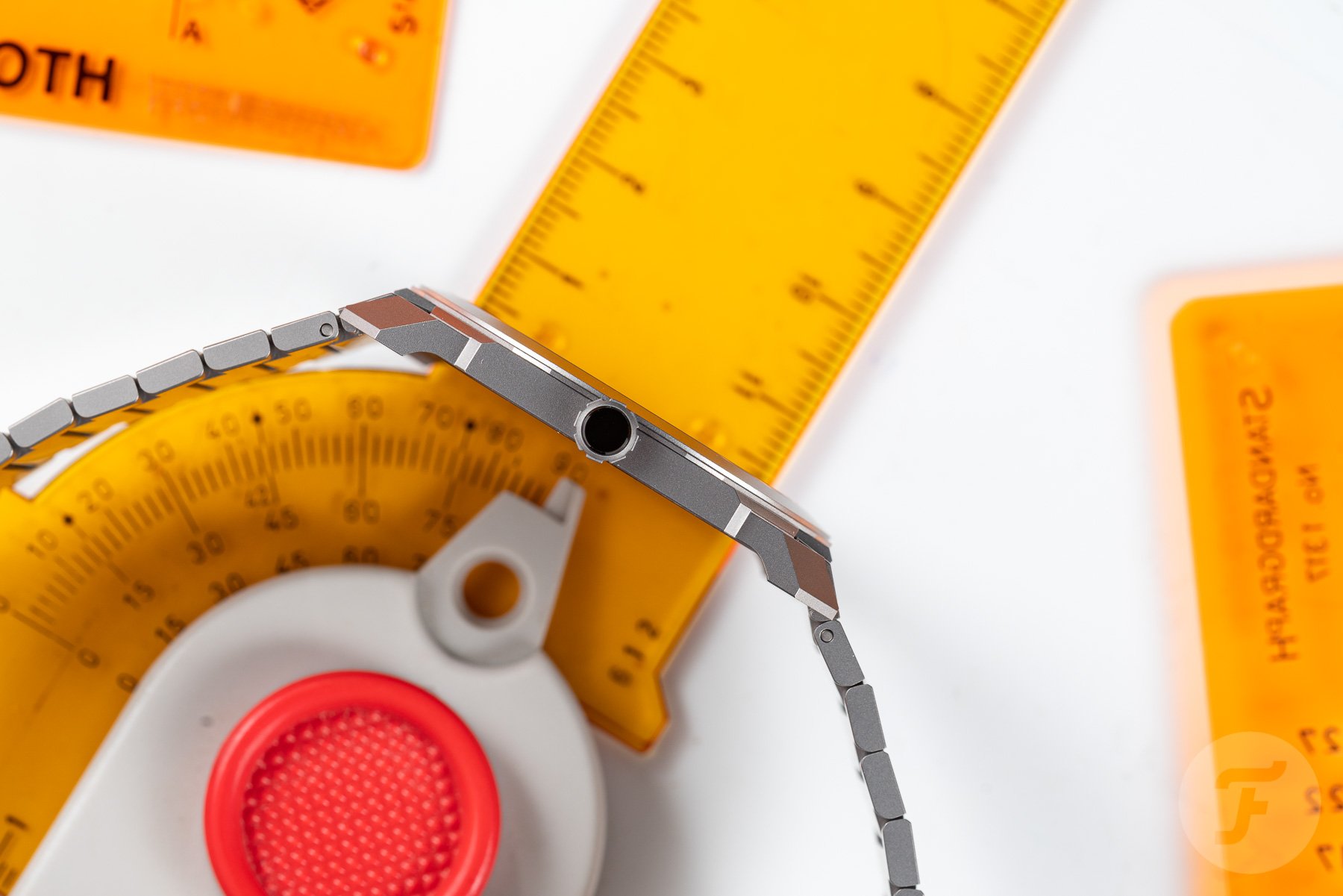 This is a bold watch. Considering slimness is normally considered the trait of a demure timepiece, this design has teeth. It is jutting and uncompromising. It offers a unique wearing experience and looks like nothing else in the wild. Those who know, know. Those who don’t, want to find out more. When you take into account that both of these models — both the automatic reference 103672 and the chronograph GMT reference 103673 — are limited to 200 pieces each, chances to see them out and about will be slim indeed. 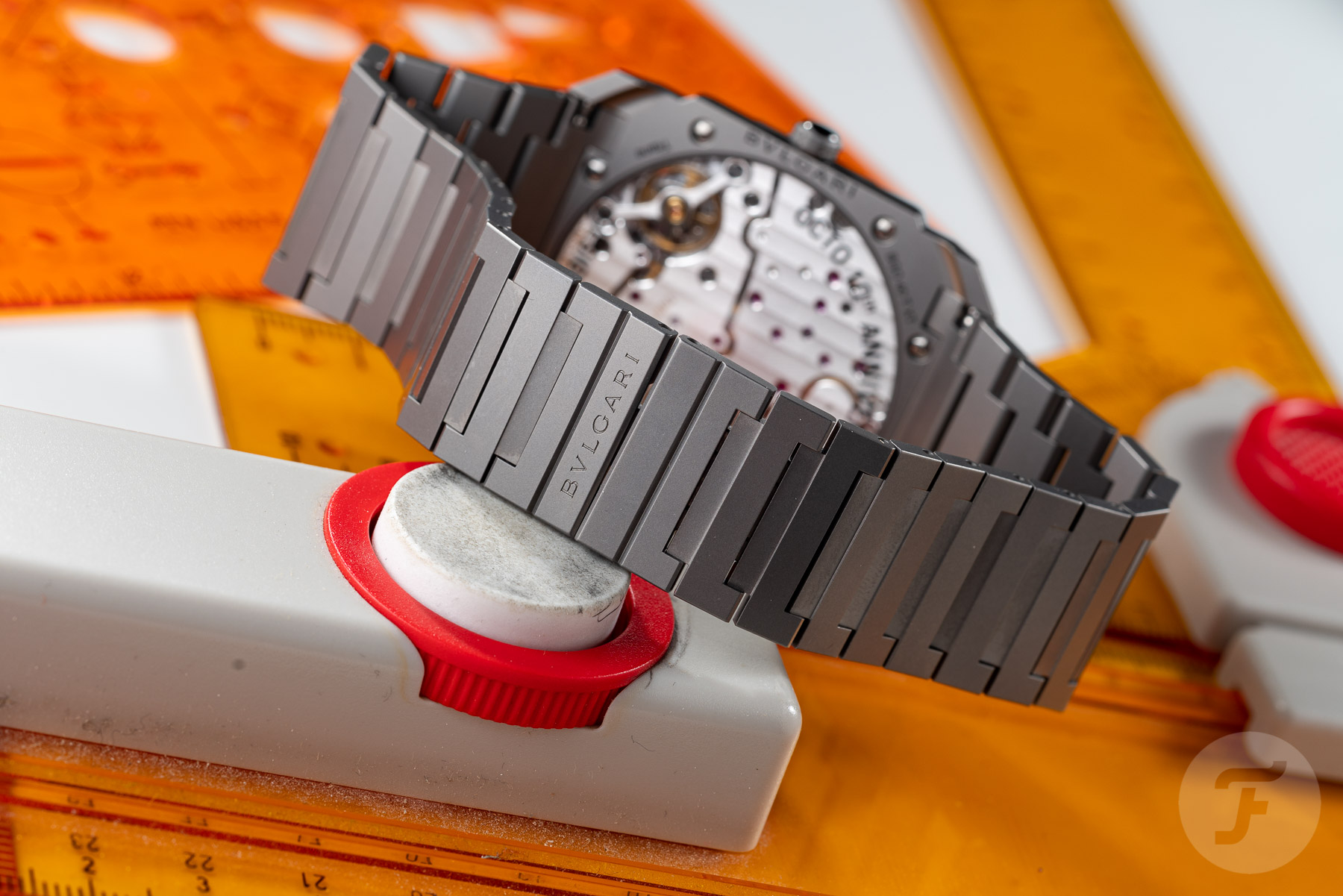 These watches are more than a pair of pretty faces. As one would expect from the Octo Finissimo line, there’s a lot going on under the hood. For the Automatic 10th Anniversary model, we have the BVL 138, which is an ultra-thin (2.23mm) mechanical manufacture movement, wound by a platinum micro-rotor. Despite that thinness, Calibre BVL 138 has a 65-hour power reserve and a 3Hz operating frequency. 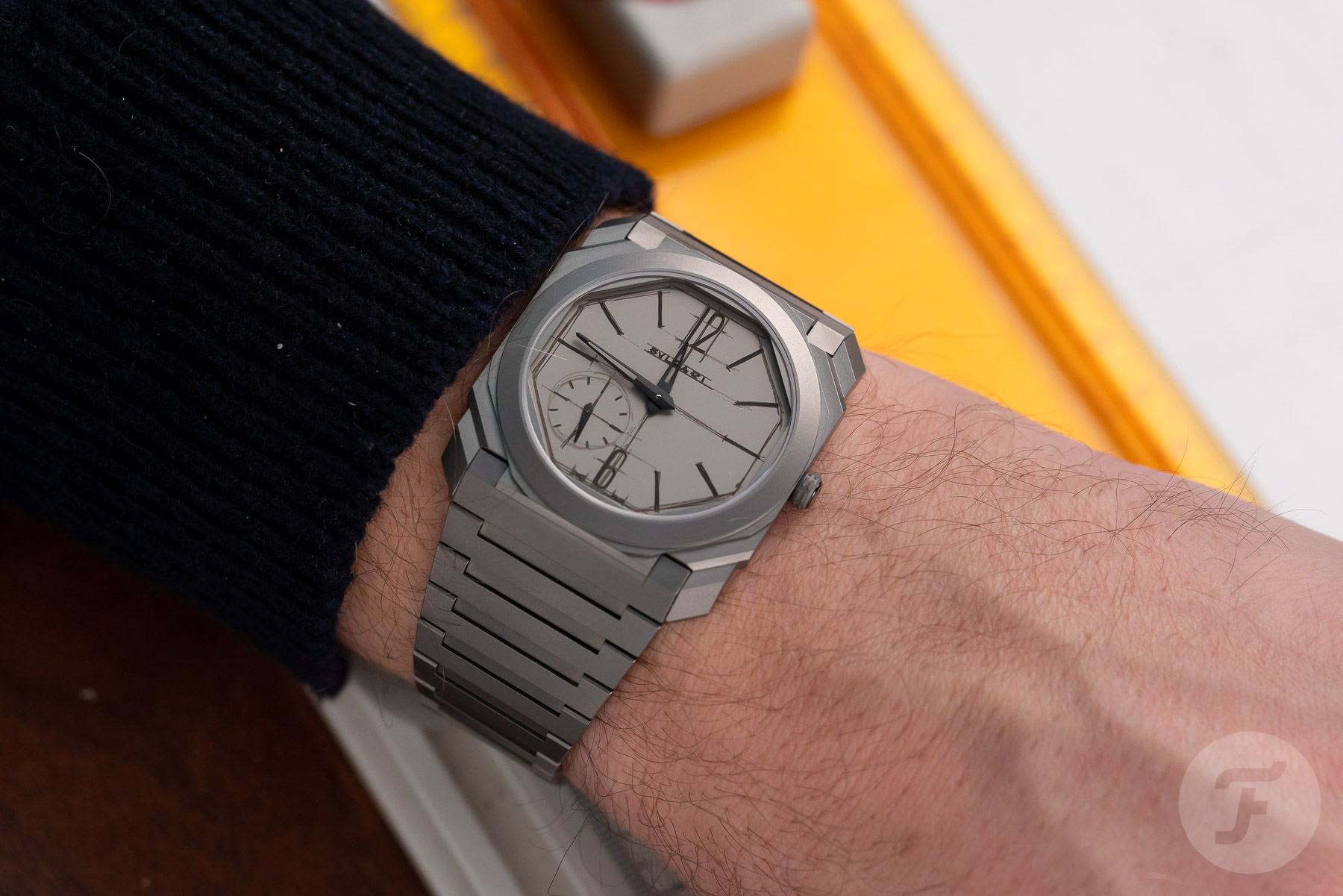 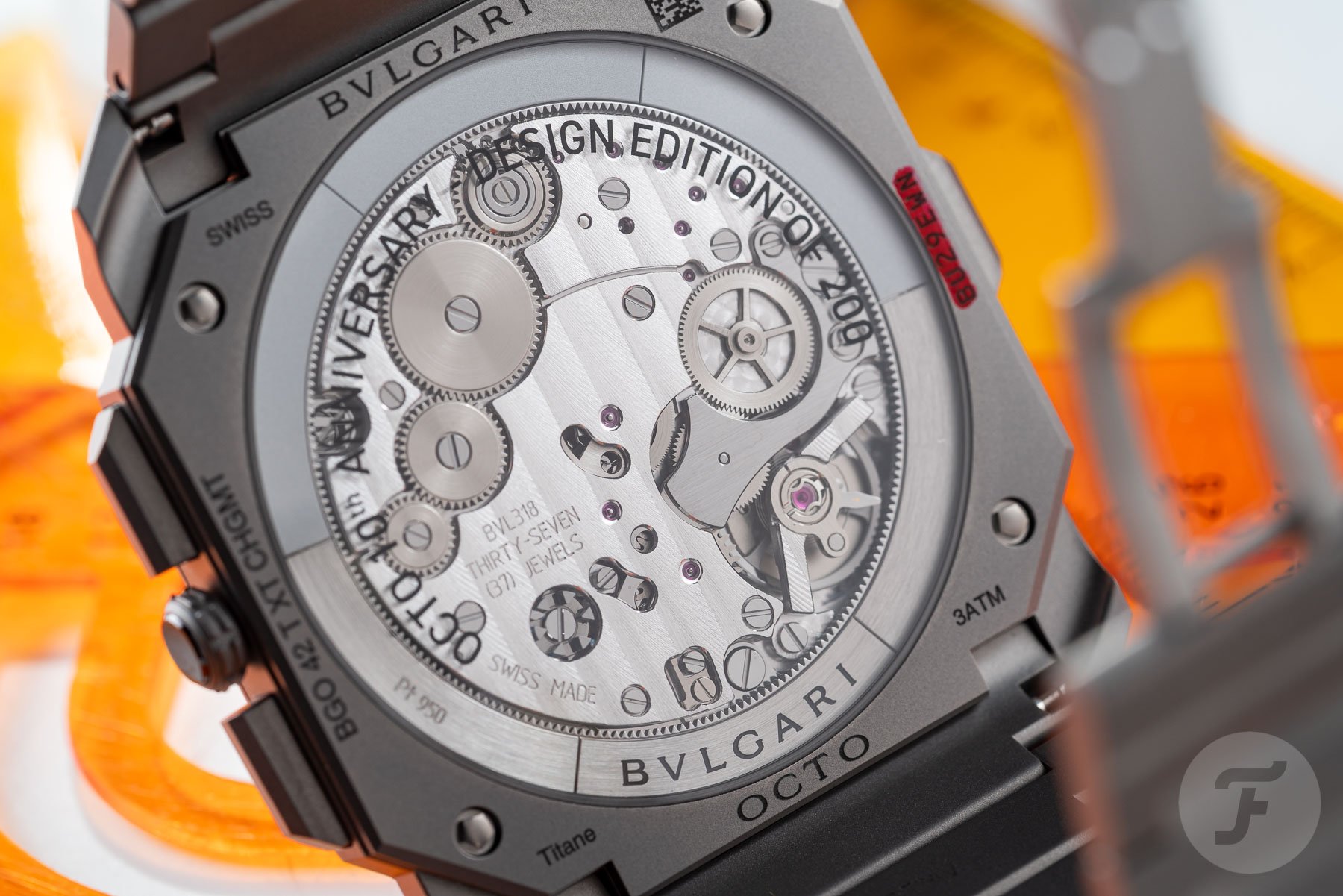 The Bvlgari Octo Finissimo Chronograph GMT Automatic 10th Anniversary ref. 103673 is powered by the BVL 318 (which kindly uses exactly the same three numbers as the automatic version so your brain doesn’t have to carry too much additional info). The 318 is 3.3mm, so only 1.07mm thicker than the 138 auto. Impressively, although the operating frequency is stepped up from 3Hz (21,600) to 4Hz (28,800vph), the power reserve only drops by 10 hours. 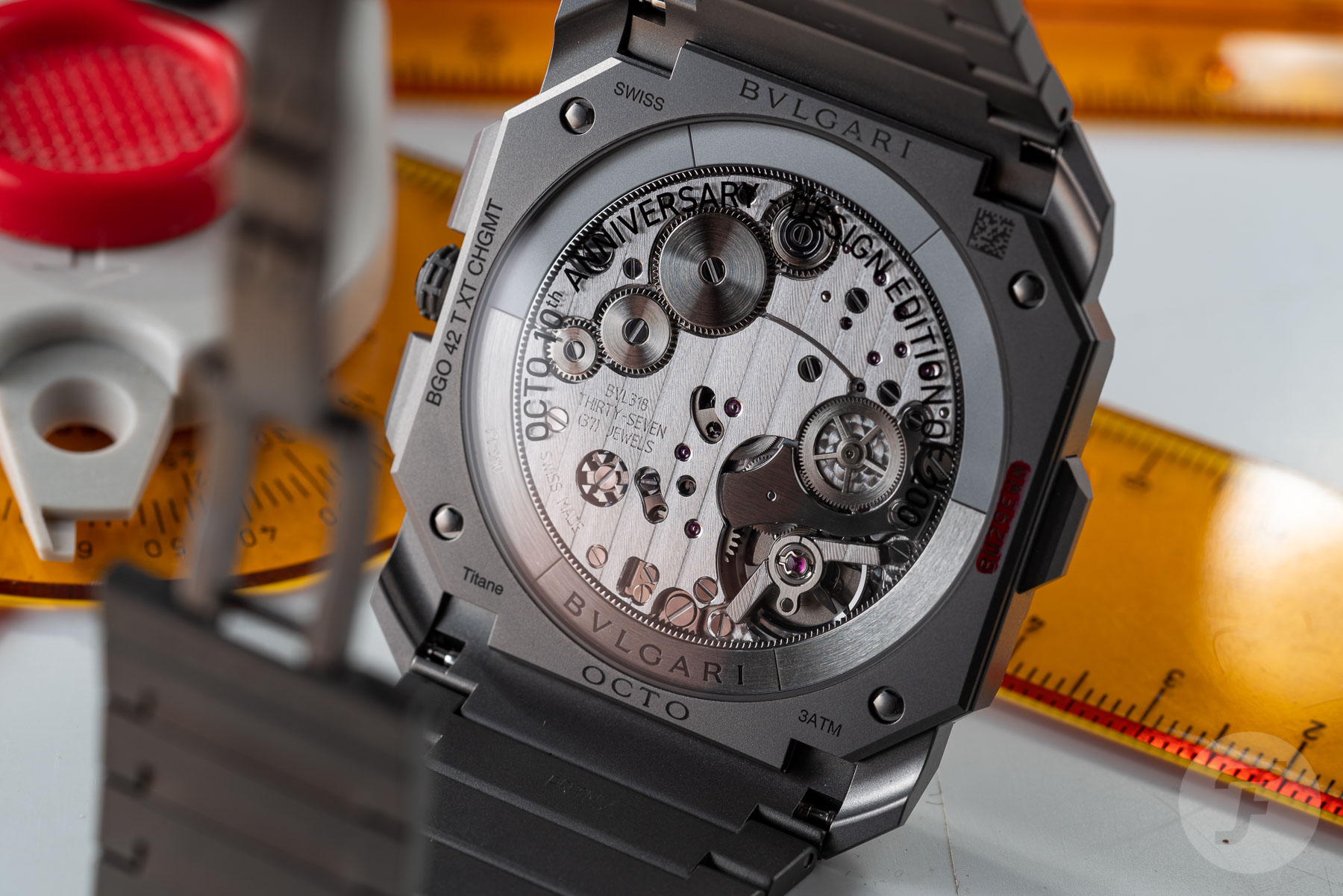 My favorite thing about the 318, however, is the peripheral rotor. I’m a real sucker for peripheral winding weights and I don’t think any brand on the market does them as well as Bvlgari, at least from the perspective of aesthetic integration. Reference 103673 is 42mm wide, with the case and dial also made from sandblasted titanium. It is also the proud owner of a display back. The water resistance, however, drops to just 10 meters for this model, so steering clear of high diving boards is probably wise. 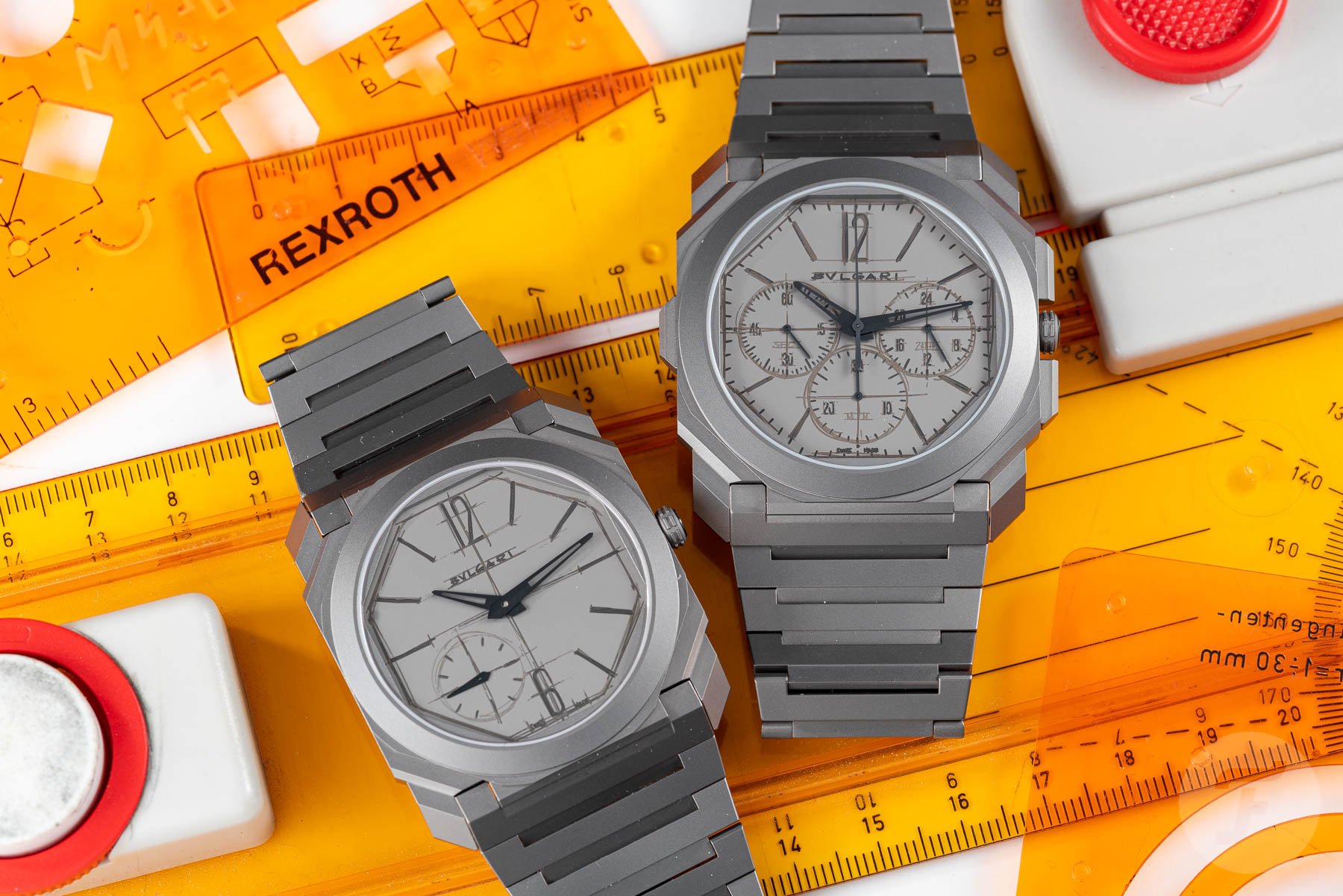 Is it for you?

This is a very special dual release. I’ve never seen anything exactly like this and especially not with such a well-known modern icon. Yes, I’m sorry for using that word again, but the importance of this design shouldn’t be understated. Can you imagine if Patek Philippe did this with the Nautilus? How about AP with the Royal Oak? Heck, I’m half tempted to call up Czapek right now and suggest Bvlgari and Czapek team up to bring the same dial style to a version of the Antarctique that boasts a blasted titanium bezel and blasted titanium C-links in the bracelet to boot… In a week that will be remembered for brands working together in ways no one expected, wouldn’t that be cool? 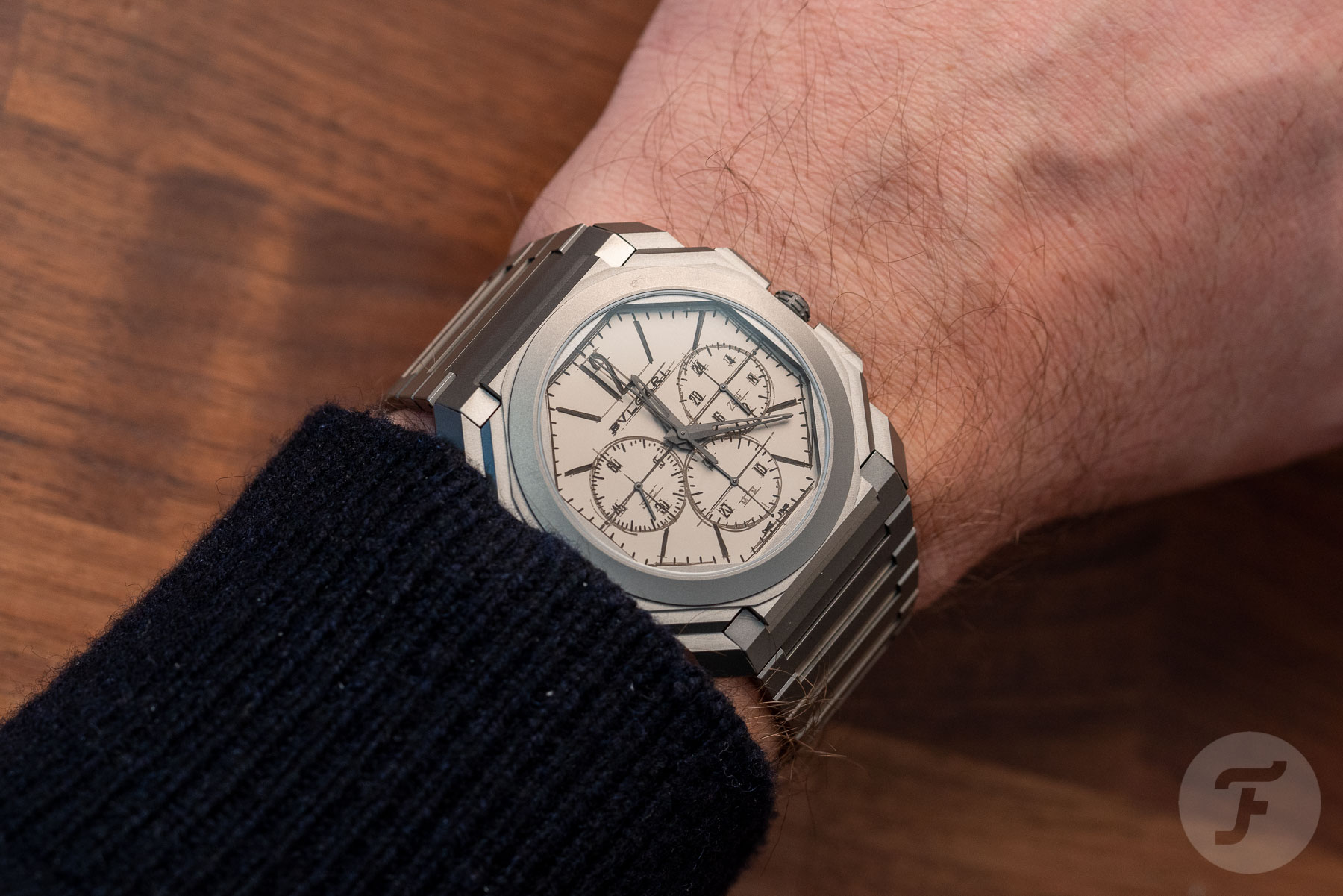 This is a good time to be a fan of watches. I think this design is a lot of fun and should be gone in a heartbeat. And even though I still don’t think my wrist can do the model justice, I am more than half tempted to try my luck and finally add a Finissimo to the stable. If you want to, it’s €14,800 for the automatic and €18,200 for the chronograph. That represents a limited-edition premium of precisely €0 over the regular models. Nice. Let us know what you think of this release in the comments below, and learn more about Bvlgari here.

UPDATE: So, this article went live earlier this week and I’ve since been contacted by an owner, Abhishek Krishnan, to be precise, who noticed a very unusual (and super cool) quirk of this dial when viewed at an angle under artificial light. Whether this was intentional or not is hard to tell (perhaps someone from Bvlgari can confirm or deny that?), but from certain angles and in certain lights, the sketches themselves seem to disappear and leave the dial as sharp as the original. Cool stuff, and a fun way to pass the time being tracked by this particular work of art. Enjoy the explanatory video above!