Vintage watches are hot, we don’t have to tell you that. We also don’t have to tell you that a lot of established brands have difficulties to come up with new and refreshing models, although BaselWorld showed that some of them are on the right track (again). The focus was on retro models, and although some people (mainly journalists) weren’t too excited about that, the watches from Oris, Seiko, Hamilton, Longines, Omega and Tissot for example, were well received.

Etienne Malec, founder of Baltic Watches must have realised that there is a demand for traditional shaped and sized watch when he designed the HMS and Bicompax timepieces. Watches that reflect the beautiful designs from the 1940’s, both time-only and chronograph watches. Modest sized (step)cases, plexi crystals and mechanical movements, the perfect ingredients for a watch aimed at collectors and enthusiasts. Etienne himself is a watch enthusiast and connoisseur as well, which he claims to have inherited from his father. A passionate watch collector who passed down his joy to his son. In one of the collector’s journals of his father, Etienne found a watch that shows the connection between Baltic and his father’s collection of vintage pieces. 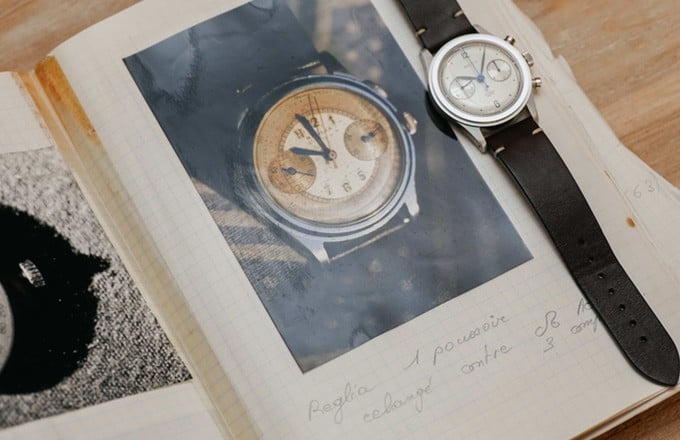 We sat down with the guys from Baltic and they showed us their collection of watches that would hit Kickstarter on April 12th. With an aim at 65.000,- EUR to realize their dream, the Baltic Kickstarter page today shows an impressive pledged 468.915,- EUR with 959 backers of this wonderful project. Needless to say that this is quite an impressive result.

The success can be explained by the product and the product alone. Some of the established brands might be pulling their hairs to see how a couple of young watch enthusiasts are able to become the talk of the town and hit the right chords with the audience. The enthusiasm the guys from Baltic showed was very catchy, with proud they showed their HMS and Bicompax collections. Sometimes, when we get to see some watches we need to control ourselves and emotions when we absolutely dislike what we are seeing. Just not to upset someone who put his pride and passion into a design or product. In this case, it was all smiles from the first moment the Baltic watches were put down on the table of the crowded restaurant in Switzerland. 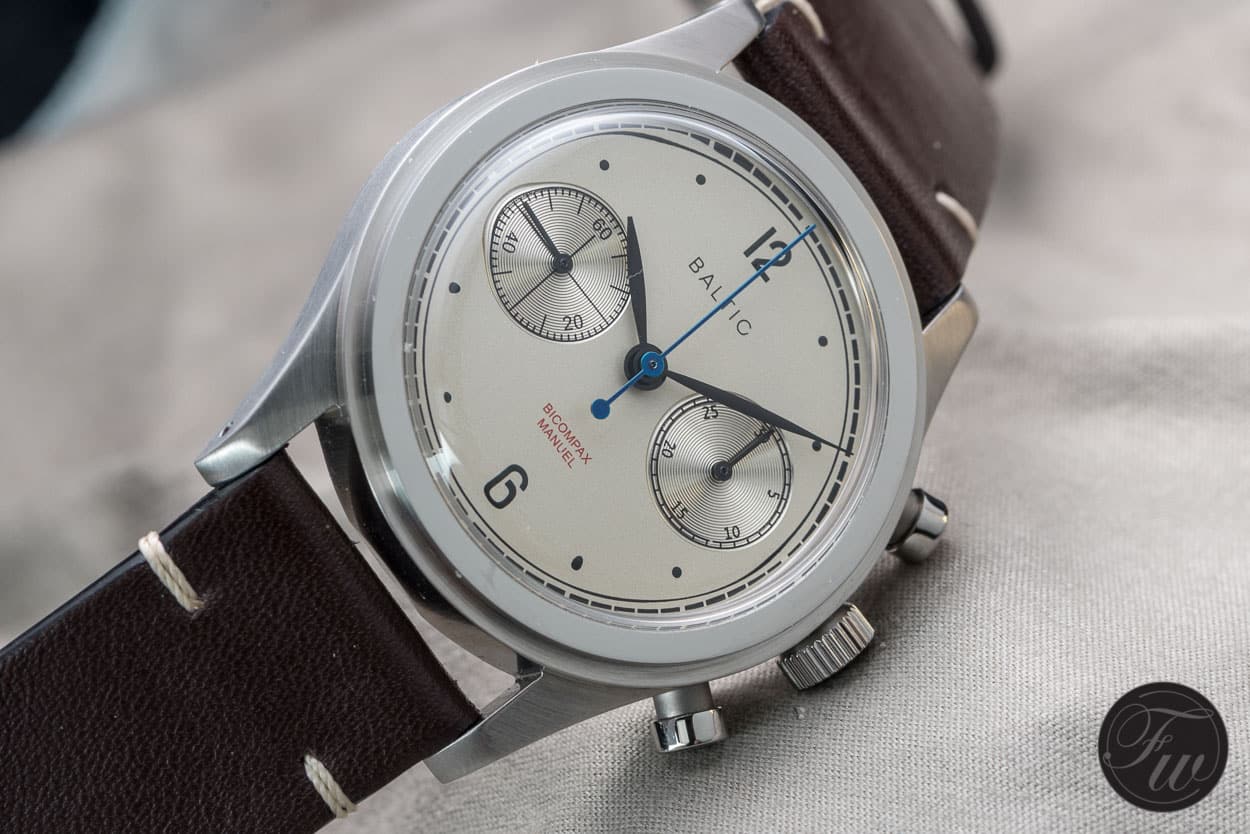 Their vintage inspired 38mm watches come in two families, the HMS (Hour Minutes Seconds) and the Bicompax, a two-register chronograph. Both have similar design cases, made of stainless steel and use a Hesalite crystal. The HMS has a self-winding movement made by Miyota (Citizen) and the chronograph uses a manual-winding Seagull caliber ST-1901 movement. Interestingly, the Seagull movement is a copy of the Venus caliber 175 movement that was in production between 1940 and 1970. According to Baltic, Venus sold all of its tooling to produce their caliber 175 to the Chinese Airforce in order to be able to produce its successor, the caliber 180 movement. Later on, the Seagull ST-1901 movement was also available for the market. The ST-1901 is a column-wheel movement with a power reserve of 45 hours. The Miyota three-hander movement is caliber 821 and can be seen as the equivalent of the ETA2824-2. 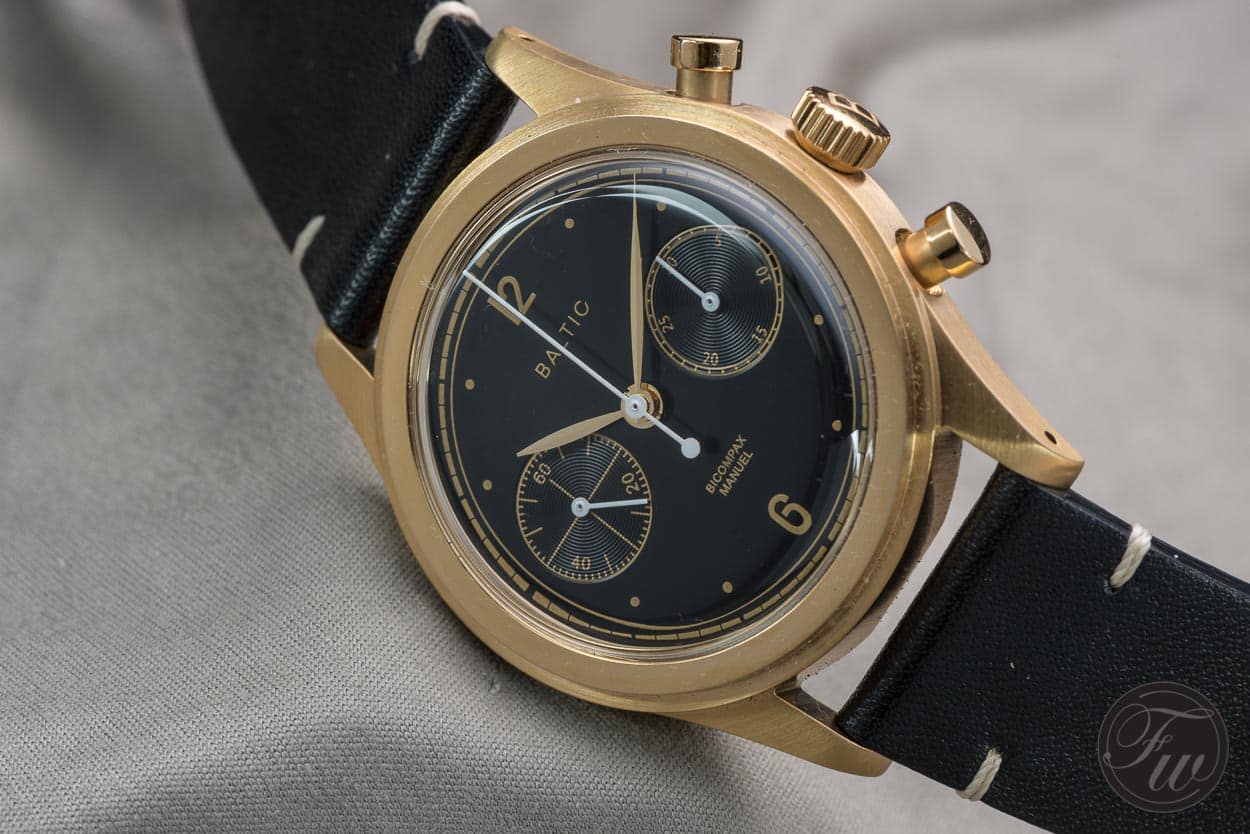 The stainless steel cases have a brushed finish to give them that ‘toolwatch’ look and feel, as well as circular brushing on the lugs and a polished of the last case step. This combination looks awesome and gives the Baltic HMS and Bicompax this vintage touch. As an option, backers can also order the display back for their watch.

Both collections are available in various executions, where the difference is mainly in the dial configurations. The dials look stunning and are a job well done by Baltic. The leaf shaped hands complete the 1940’s appearance.

Another interesting thing to note is that Baltic is very transparent in everything they do. While the watch is completely assembled in France, they don’t make it a secret where they source their components (Shenzhen/China and the HMS movement in Japan). The straps are hand-made in France and made of Italian Nappa leather. Although it is irrelevant for the quality of the watch, I like that Baltic is transparent about the whereabouts of their watches. Unlike some of the Swiss established brands who have a lot of their components made in China but seem to hide this very carefully as it doesn’t fit their ‘luxury’ image (while China might be one of their most important markets).

Is there not one single point of criticism? I find it difficult to come up criticism towards a watch just because of the sake of having something to nag about. Especially with the prices that Baltic uses for their watches, 399 EUR for the HMS and 649 EUR for the Bicompax (after the Kickstarter Campaign). Perhaps you can argue that the design is not very original, as it is inspired by watches from the past, but that’s the whole point of these Baltic HMS and Bicompax watches. Again, I am pretty sure some of the established brands are watching this closely (unless they are ignorant enough not to watch the market closely these days) and think “we should have done that”. 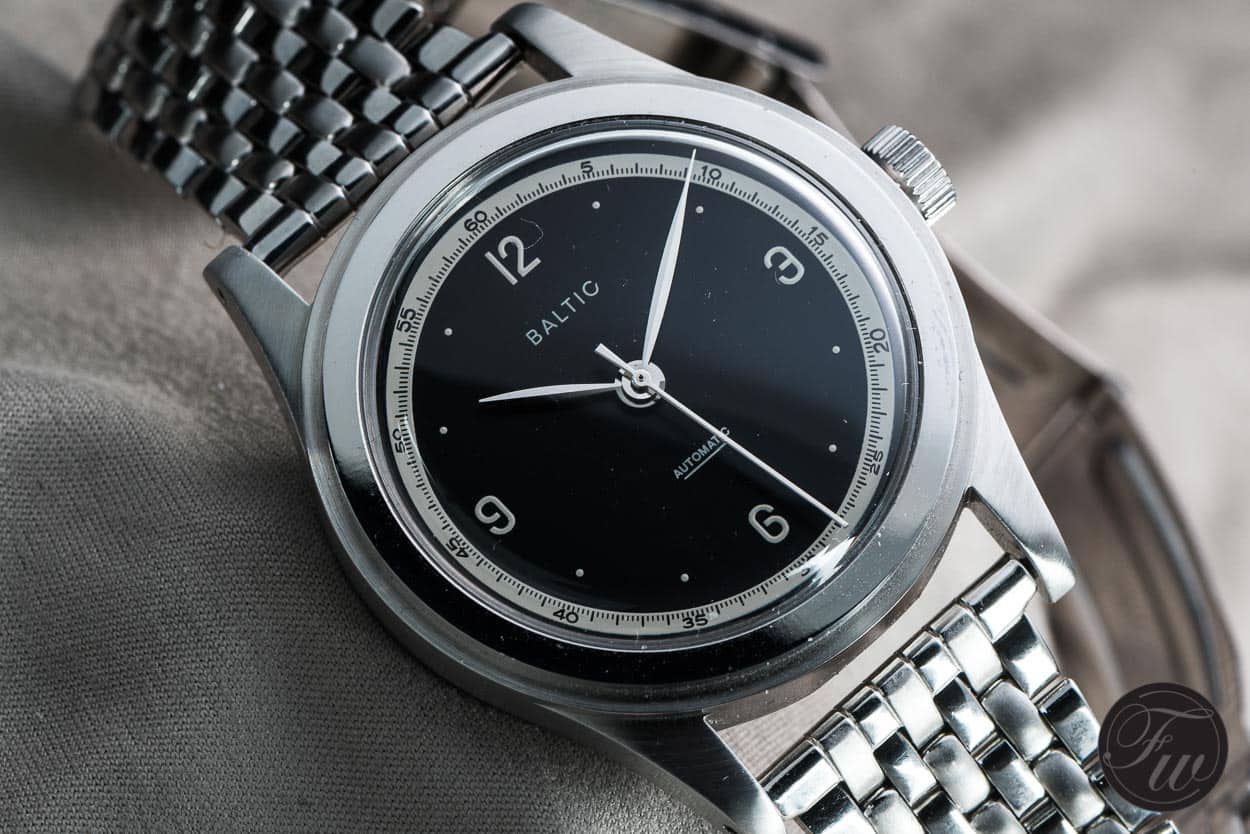 We can’t wait to get out hands on one of the final products, that are expected to be delivered November 2017.