If you're not sure which one to get, let's have a look at both
Balazs Ferenczi
comments 16
Share

Some watches are just more memorable than others. The brand puts them onto the market, creating a massive buzz for some reason. So far, so good. Then, after the initial reactions, they stay in the public consciousness and never leave. When Hamilton released the Khaki Field Mechanical, this is precisely what happened. To say that it received critical acclaim from the media would be an understatement. The Khaki Field was praised by almost every media outlet that featured it. It was only logical for Hamilton to strike while the iron was hot. Many newer, different variations of the Khaki Field Mechanical have come, but none have had more impact than the bronze version.

I felt it was logical to compare the first significant hit to the latest one. So, I grabbed my steel version and wore it for a few days. Then I got the bronze one from the brand and did the same. If you ask me which my favorite is, I cannot tell you that. Still, here are my thoughts on both the bronze and the steel versions of Hamilton’s Khaki Field Mechanical. 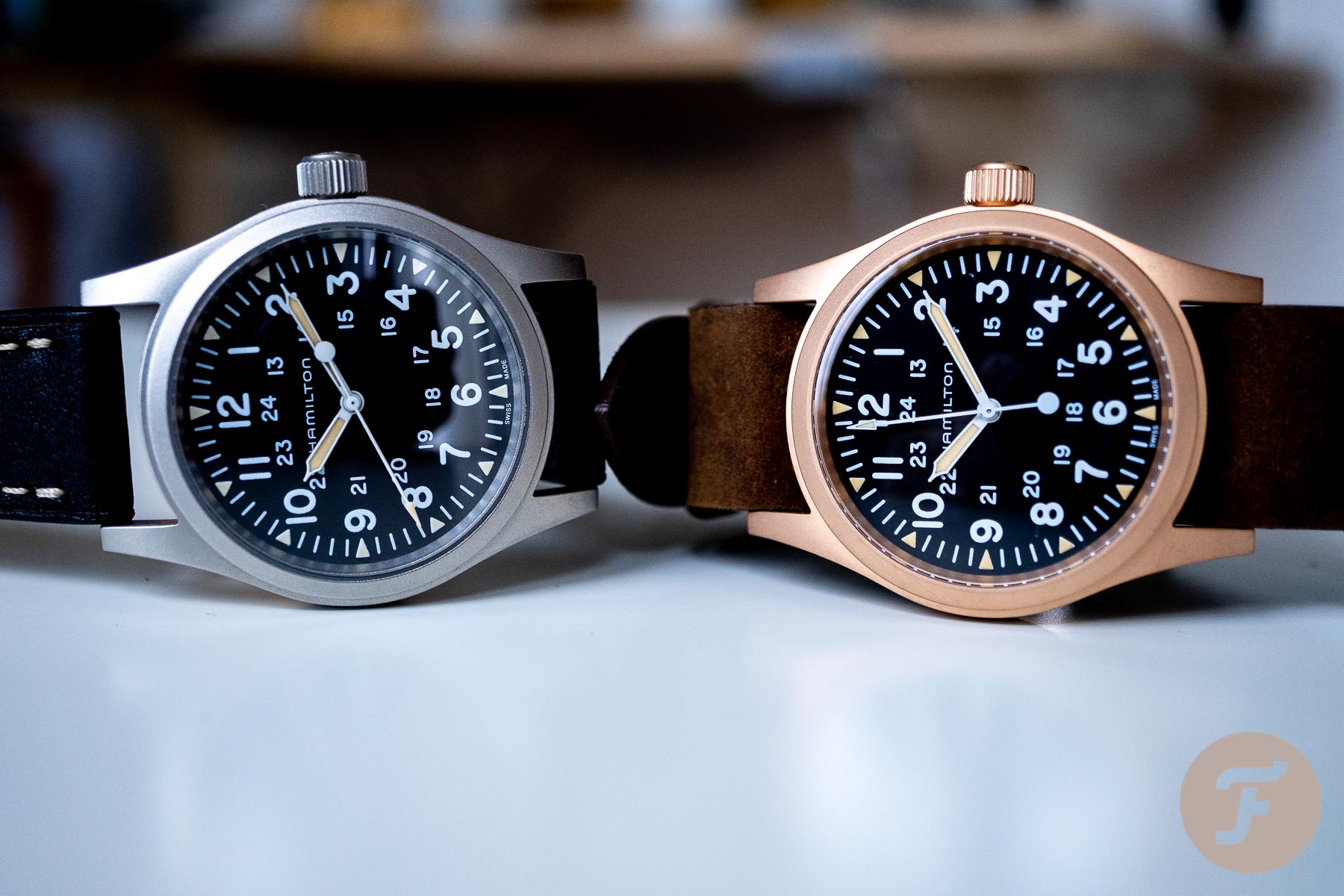 Right off the bat

The first thing I realized when I unpacked the bronze version was how different it looked from the steel one. Yes, the design is the same — the size, the looks, all identical. Yet, maybe due to the bronze case, it felt like a totally different watch. Full disclaimer — the demo watch I got from Hamilton was still new, which means that the case was still fresh, with no tarnish or discoloration whatsoever. As the original idea behind the Khaki Field Mechanical is to remake a famous military watch of the past, the hands and indexes have yellow lume. It’s a simple but effective way to create the allure of an aged look or faux patina. I had the feeling that the yellow was stronger on the bronze watch, which matched the case tone. It indeed was the perfect match to the bronze, which resulted in a much more unified look.

The proof is in the pudding, as the saying goes. And what better way is there to test a watch than to strap it around your wrist? I must admit that I’m not the biggest fan of the nylon strap my steel Khaki Field came on. After a few weeks, I swapped it to this beautiful black Two Stitch Straps creation. The bronze came on the standard leather NATO, and I thought maybe it would make sense to change that too. Then the first surprise came — the bronze Khaki Field Mechanical has no drilled lug holes. I’m a fan of vintage (looking) watches with drilled lugs, as it is a subtle but vital element to achieve the aged look. While I’m not sure why the bronze case doesn’t have them, I rejected the idea of swapping straps after all. This made me wonder what else could be different. 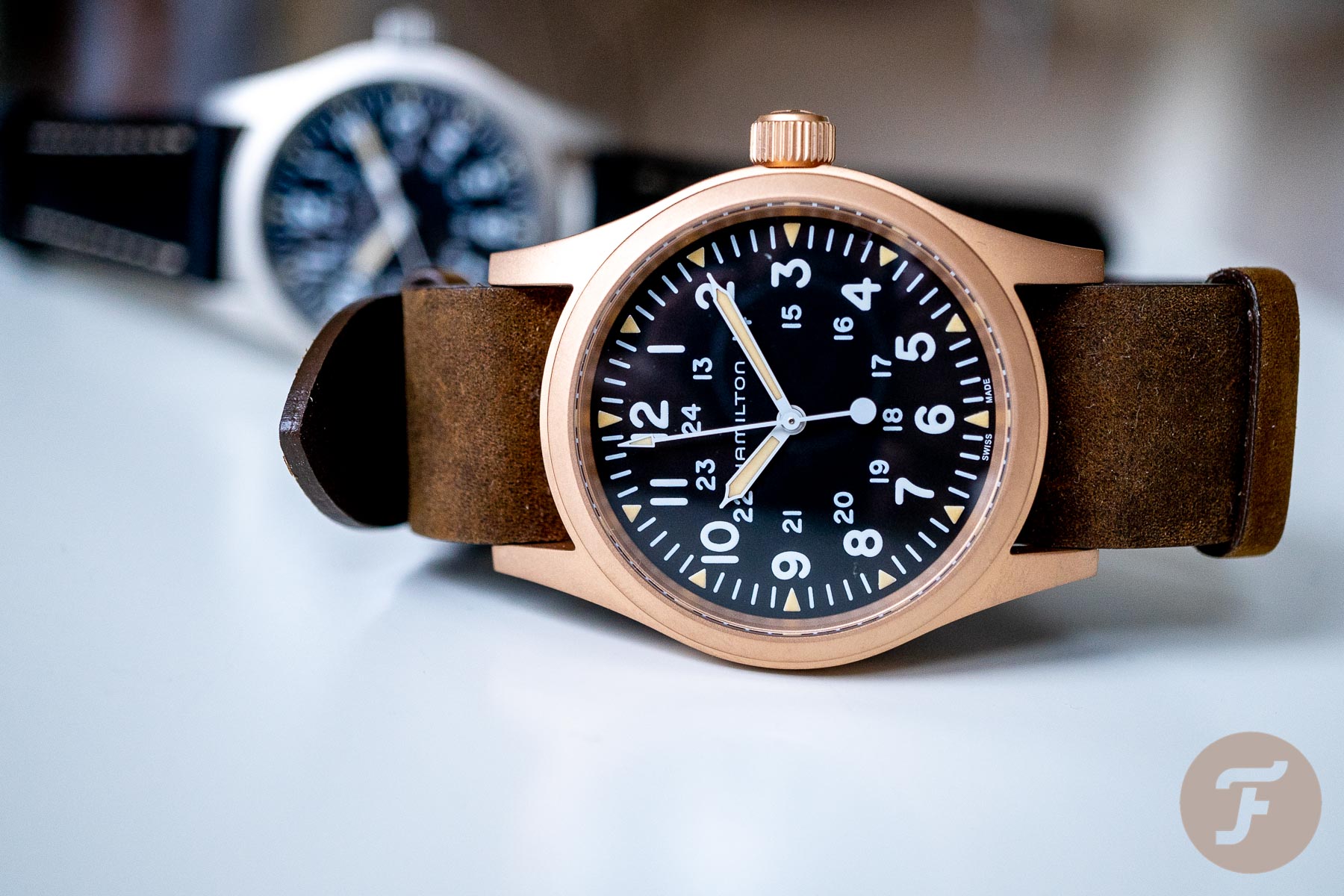 Well, I did not have to look too long. All you need to do is flip the watch over. My original steel version has a screw-in case back with five cuts for the case back remover tool. Aside from that, you see the usual — the Hamilton name and logo in the middle. There are some of the watch’s details like water resistance and the reference number engraved on the back. Whereas the bronze Khaki Field Mechanical’s case back design is virtually identical, the cuts for the remover tool are missing. Is that a big problem? Not necessarily, at least not for a trained watchmaker. Yet, it’s worth mentioning. We are comparing these two legends, after all. The differences I listed above do not considerably impact the overall look or usability of the Hamilton Khaki Field Mechanical Bronze. Also, the rest of the features are the same. 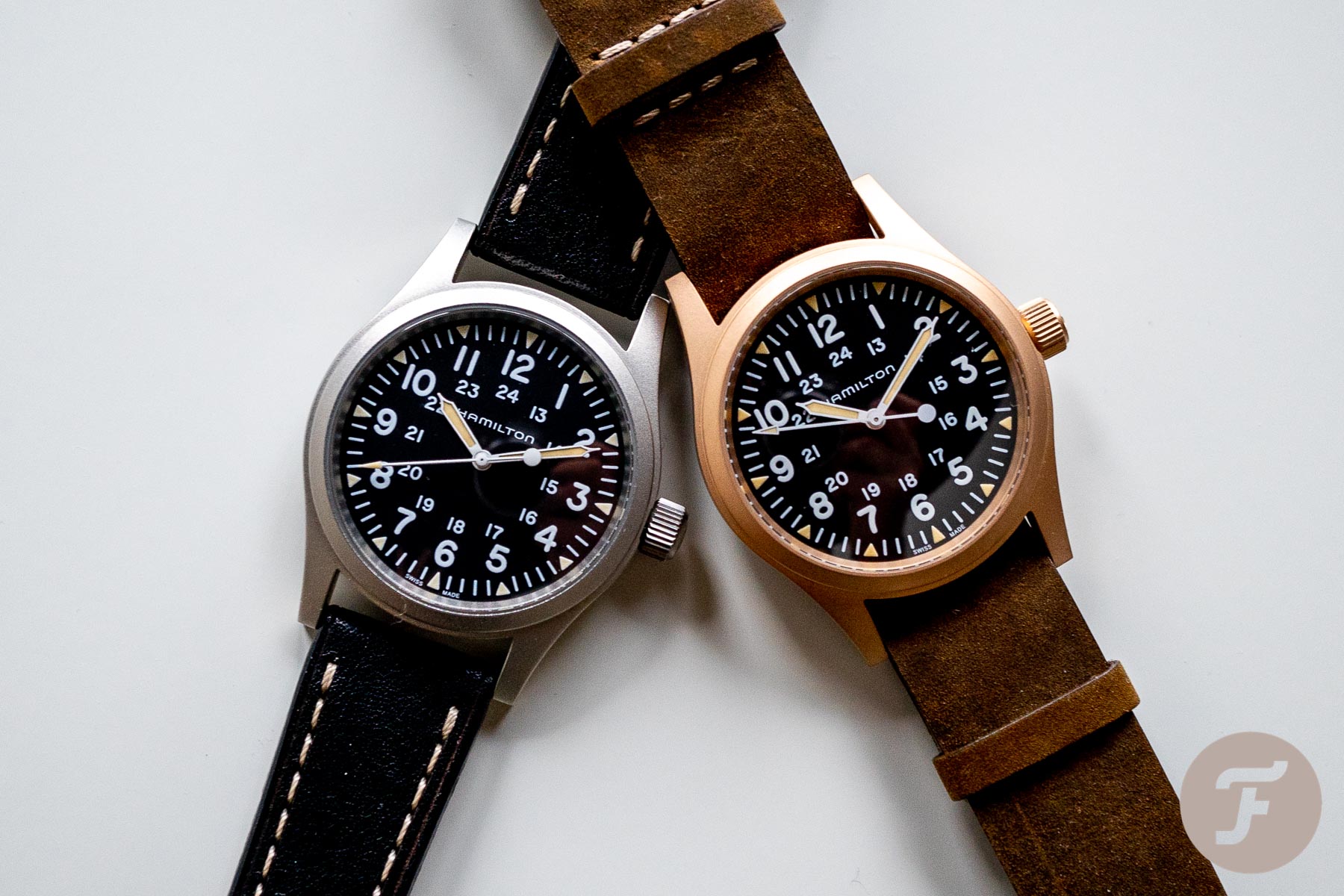 Maybe it’s time to talk about the similarities. Well, the most obvious one would be the movement. Both the bronze and the steel Khaki Field Mechanical come with the Hamilton H-50 caliber. If you know this movement, I’m sure you know that it is not Hamilton’s own. The H-50 is an ETA 2801-2-based movement, developed by ETA for the Hamilton brand. Many other companies within the Swatch Group use similar movements for their watches. Those are known as the self-winding Powermatic calibers. 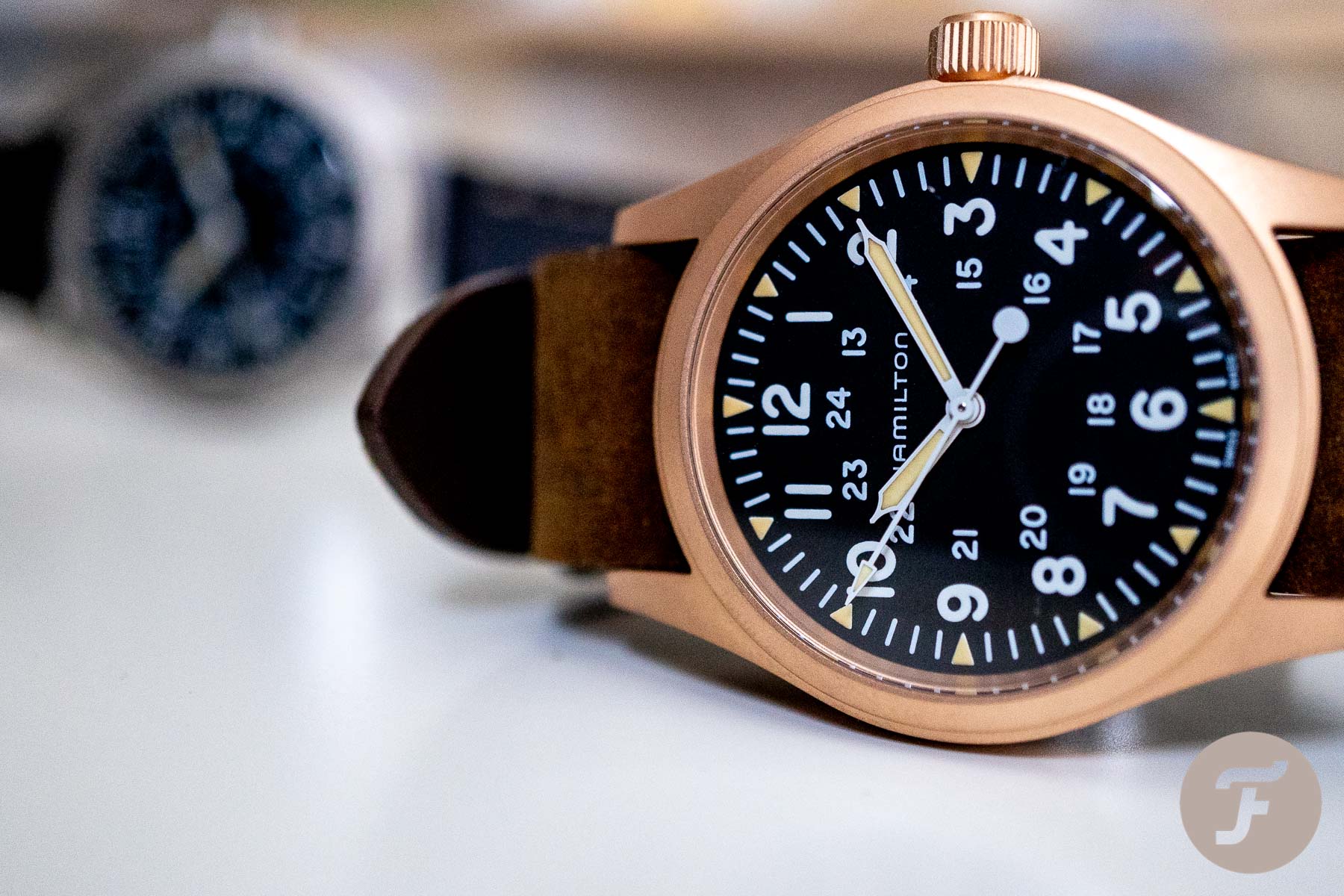 Meanwhile, the H-50 is a manual-wind movement. The common denominator to the Powermatic calibers is the 80 hours of power reserve that the H-50 has. Further features of the H-50 are the 17 jewels or date option for specific models, which are clearly not for the Khaki Field Mechanical. There is nothing wrong with this caliber, though. It gets its job done, and it’s a trusty and straightforward mechanical caliber. I love winding it and seeing how long the power reserve lasts. 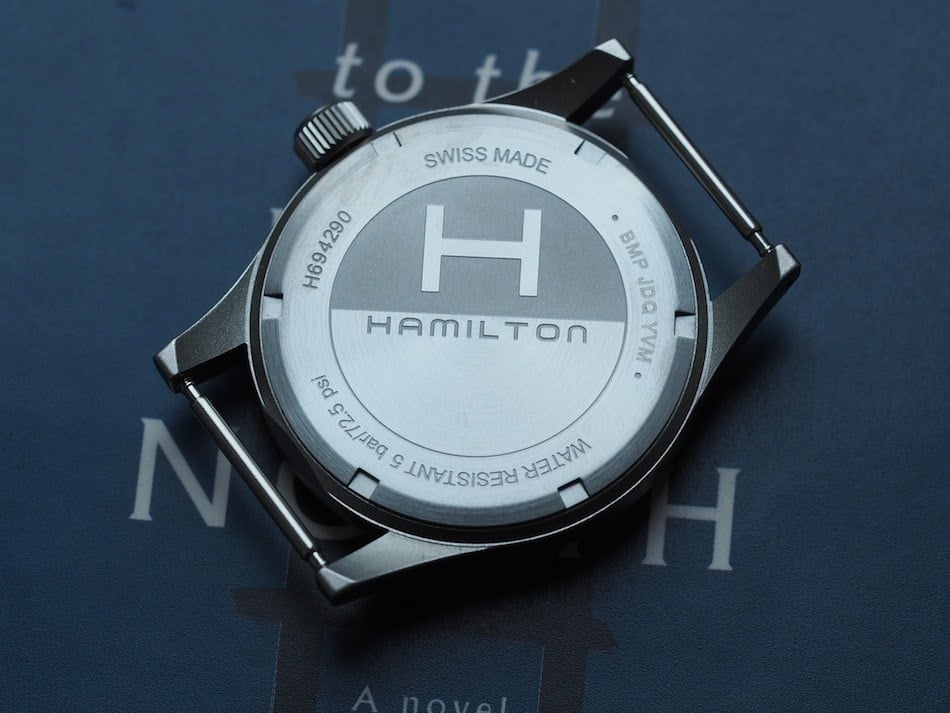 Bronze for the win?

This Khaki Field Mechanical is Hamilton’s first-ever bronze case. I must admit, the brand hit a home run with this watch. It lacks the military feel, even if the case is matte like the steel version. As a matter of fact, the material is an alloy of bronze and titanium, which allows it to be sturdy and light. I do feel, however, that we cannot compare it to the current steel model or the vintage versions. This bronze timepiece is a twist, a reinterpretation of a famous model, and we should look at it as such. Would I wear one? Absolutely. I wholeheartedly agree with some of the voices that say that this is easily the best bronze watch in its price range. We praised the steel enough in the past (enter Mike); let the bronze shine a bit, too, right? 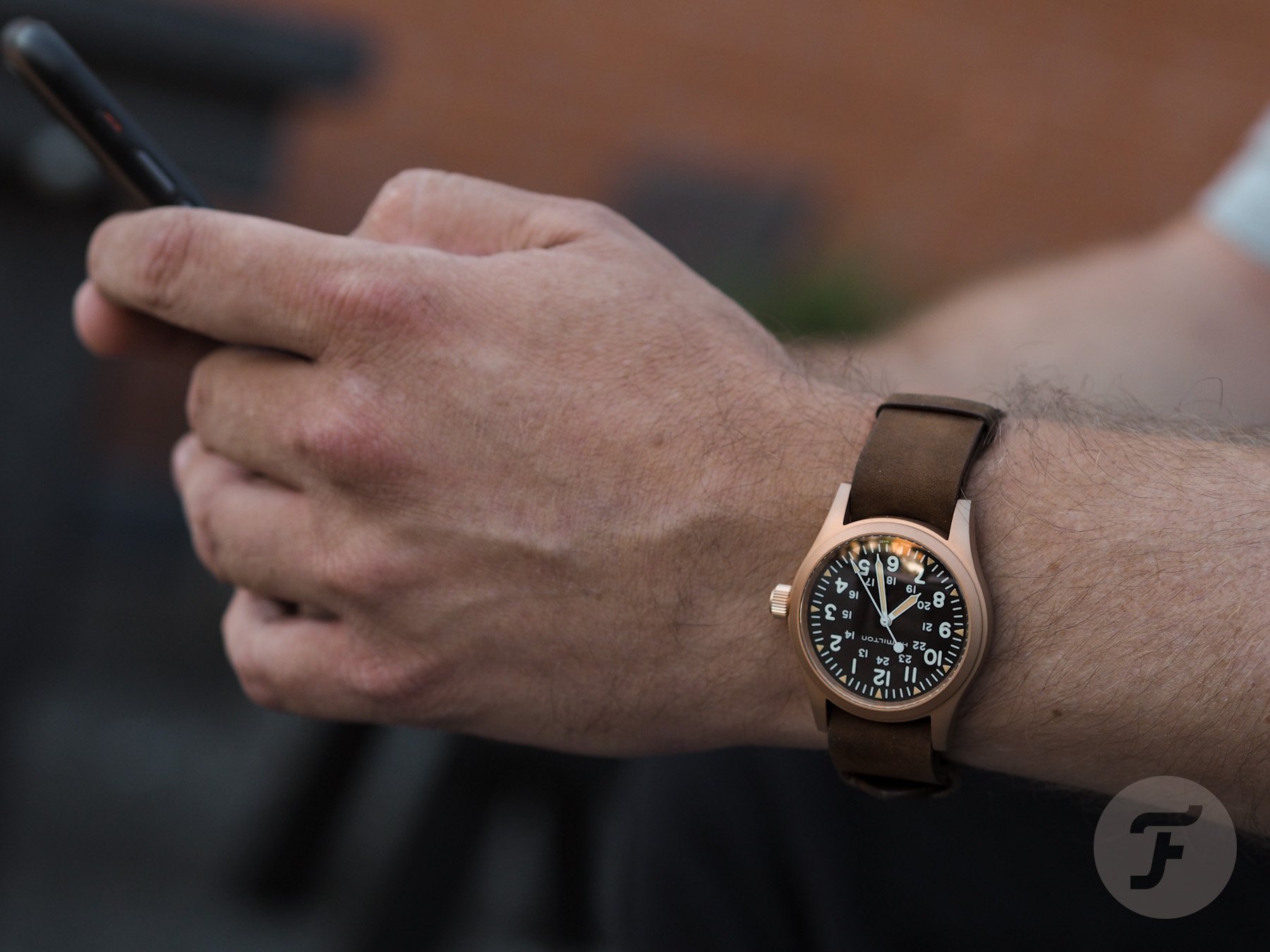 I forgot to mention one other significant difference between the two — the price. The steel Hamilton Khaki Field Mechanical is €470. The bronze version, however, is €745. Now, this is a significant step up in this category. I’m not sure if the latter is better enough to justify such a difference. To me, it makes the steel version an even better deal. Yet, if you like bronze and want a new, hand-wound, Swiss-made watch with a great power reserve, the Khaki Field Mechanical Bronze is a watch you should consider. Even if the charge is higher than the steel version, it is still a well-priced timepiece. In the end, it all comes down to personal preferences. I have the steel for a reason, but I don’t hate the bronze either. Whether or not I’ll be buying one, though, only time will tell.

Here is a link to Hamilton’s website in case you want to check the Khaki Field Mechanical pieces out. Let me know which version you prefer in the comments below.